acclaimed artist, cai guo-qiang has created a 75 meter tall ‘color mushroom cloud’ on the occasion of the 75th anniversary of the first controlled, self-sustained nuclear chain reaction in chicago. the work serves as a reflective piece on the complicated heritage that the historic experiment has left in human society. held at the university of chicago, the artistic experiment gathered thousands of viewers and was also broadcast online. 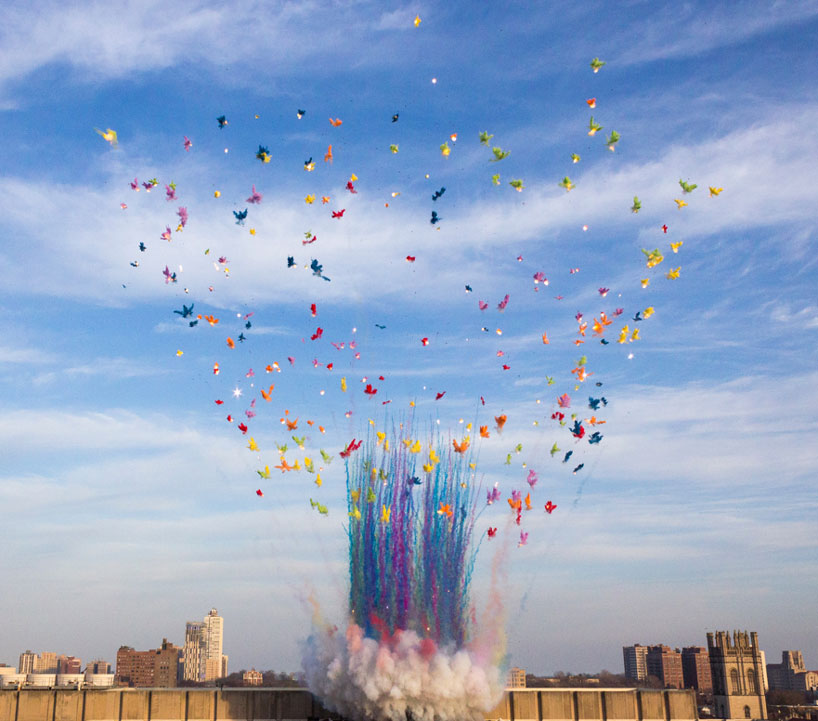 at exactly 3:25pm, the moment when the nuclear reaction took place in 1942; the artist signaled: ‘fire!’
photo by zoheyr doctor and reed essick, courtesy cai studio

in 1942, enrico fermi led a team of leading physicists in the basement squash court below the university’s soccer field and successfully realized the secret nuclear experiment, marking the beginning of the nuclear age and forever altering the fate of humanity. 75 years later, the university organized ‘reactions: new perspectives on our nuclear legacy,’ a series of public events that culminated in the explosion of cai guo giang‘s ‘color mushroom cloud’. at exactly 3:25pm, the moment when the nuclear reaction took place in 1942; the artist signaled: ‘fire!’ to unleash the colorful explosion. 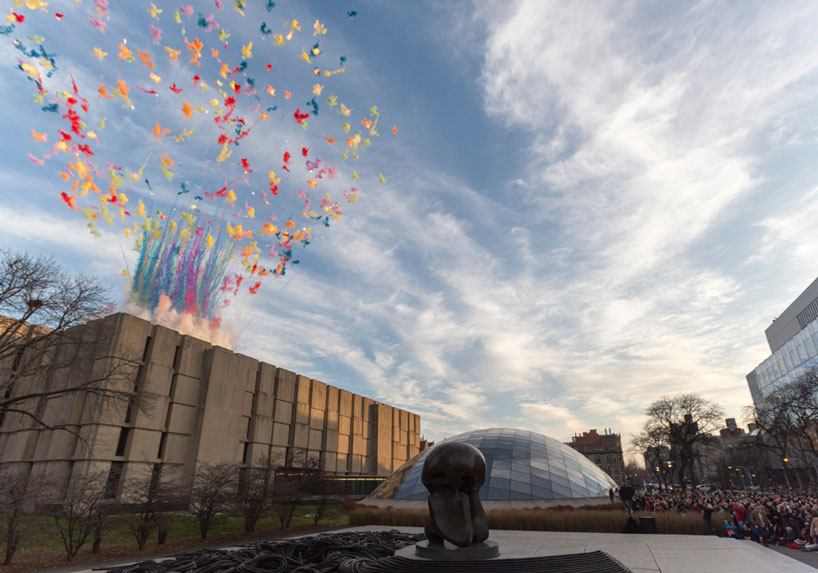 in 1942, a team of physicist conducted a secret nuclear experiment at the university of chicago
photo by wen-you cai, courtesy cai studio

as the mushroom reached its highest point, over four hundred color aerial shells, each imbedded with a computer chip, exploded at once, forming the shape of the mushroom cap. the overall composition rose about 75 meters above the roof and could be seen from a distance. the vivid hues lingered for about 10 seconds before it was swept away by the winds; its brief existence soon traceless. 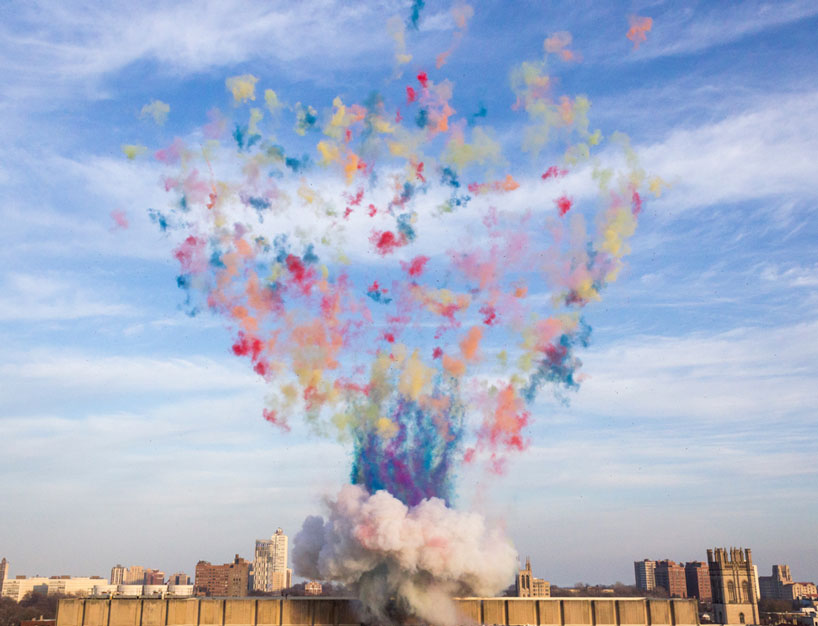 cai’s colorful pieces fueled by gunpowder have an activist narrative which has allowed him to make powerful political statements in the past. in 1994, he realized the explosion event ‘earth has its black hole too: project for extraterrestrials no. 16’ near the ruins of the a-bomb dome in hiroshima, for which he received the hiroshima prize honoring contributions to human peace. ‘today, we are faced with ceaseless terror and violence all around the world,’ explains cai guo-qiang. ‘humans have created a power for large-scale devastation, yet there is still someone using this power to create beauty—this in itself gives humanity a little bit of hope.’ 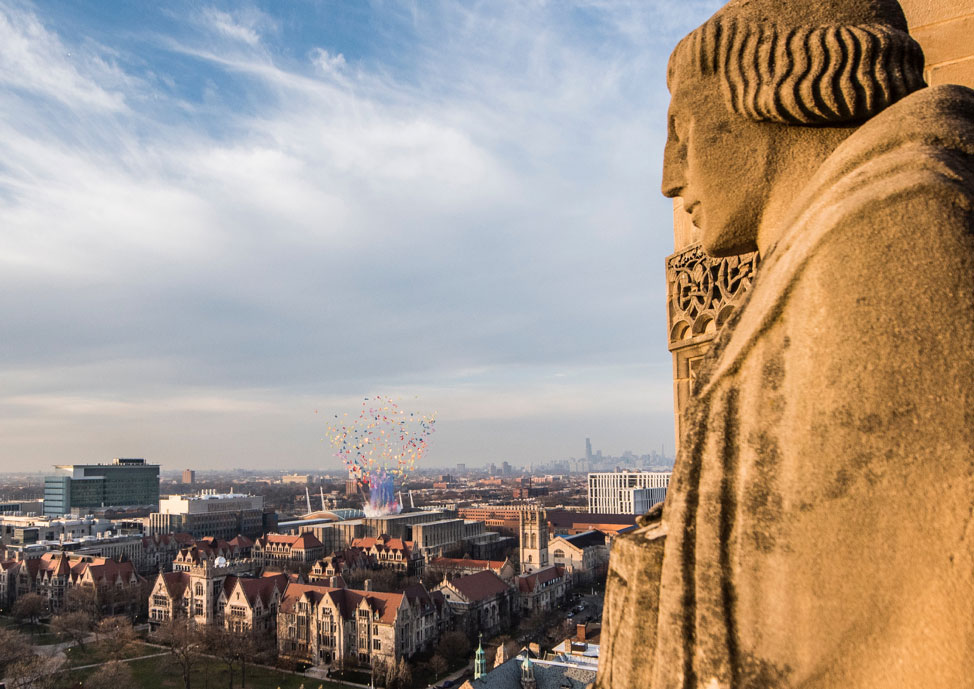 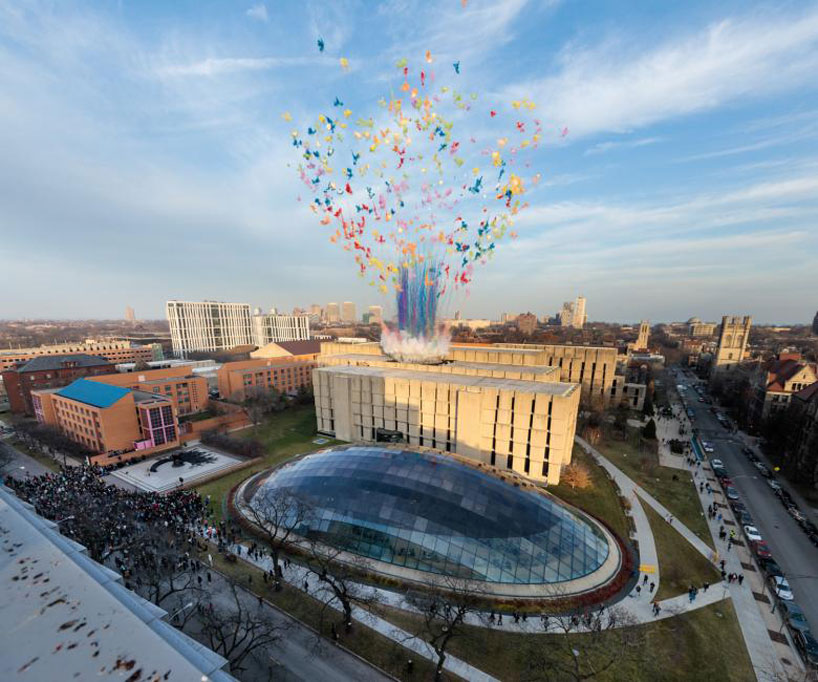 the artistic piece was part of a series of public events called ‘reactions: new perspectives on our nuclear legacy’
photo by john zich, courtesy cai studio