cai guo-qiang signing his drawing sunshine and solitude: quetzlcóatl y xipe tótec photo by diego berruecosdeveloped as a site-specific project for the museo universitario de arte contemporaneo (MUAC), mexico city, ‘sunshine and solitude’ was the first solo exhibition in latin america of chinese contemporary artist cai quo-qiang. consisting of a major new installation in which the name of the overall exhibition was derived, it included a video installation of large-scale projections that presented a survey of cai’s landmark explosion events since 1990, such as the creation process of selected gunpowder drawings most notably the suite of 14 drawings created at MUAC for the exhibition. 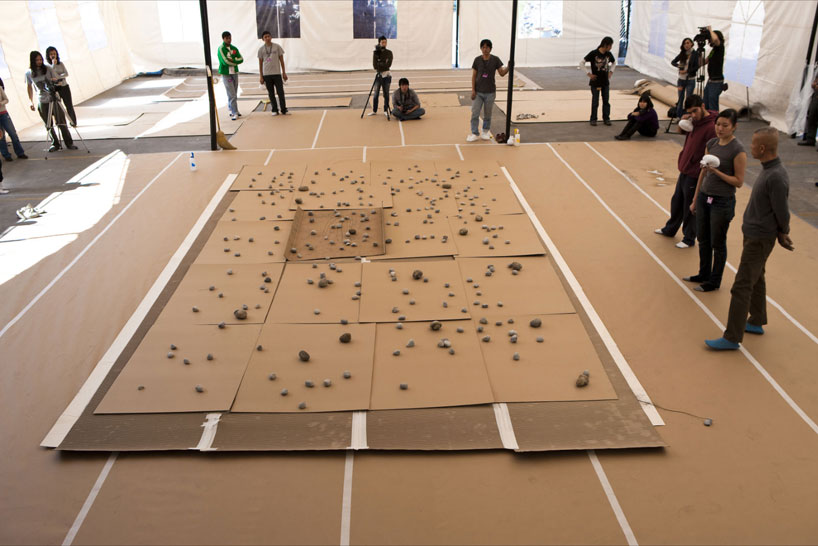 cai guo-qiang, his assistant, and volunteers prior to ignition of gunpowder drawing sunshine and solitude: quetzalcóatl and xipe tótec photo by diego berruecos 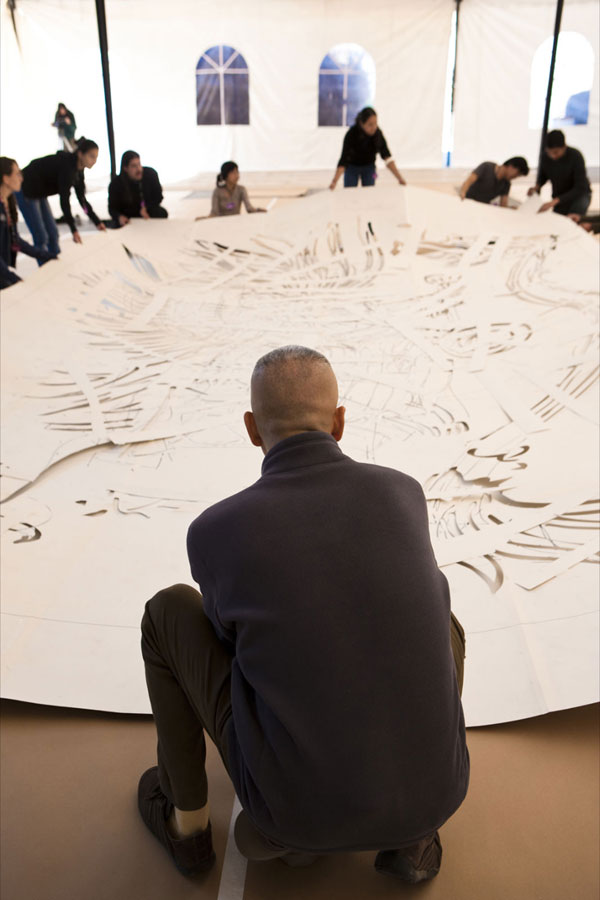 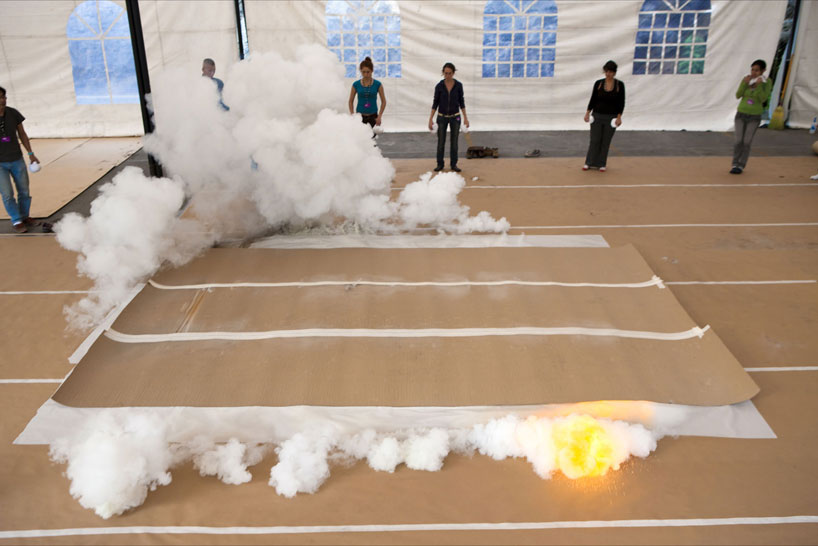 ignition of eagle, one of fourteen gunpowder drawings for the installation sunshine and solitude photo by diego berruecosfor cai, born in 1957 in the city of quanzhou, fujian province, china, the development of a major installation, like the one presented at the MUAC, is a process that begins with a discursive exploration with the curator and his colleagues at the studio and museum, followed by a site visit and research, and then crucially a practical collaboration in the creation of the gunpowder drawings. accordingly, the drawings for the exhibition were created by cai at the MUAC’s facilities with the assistance of art students from the universidad autonoma de mexico (UNAM) over the course of seven days; these sessions were open to the public. see a video of how the pieces were created 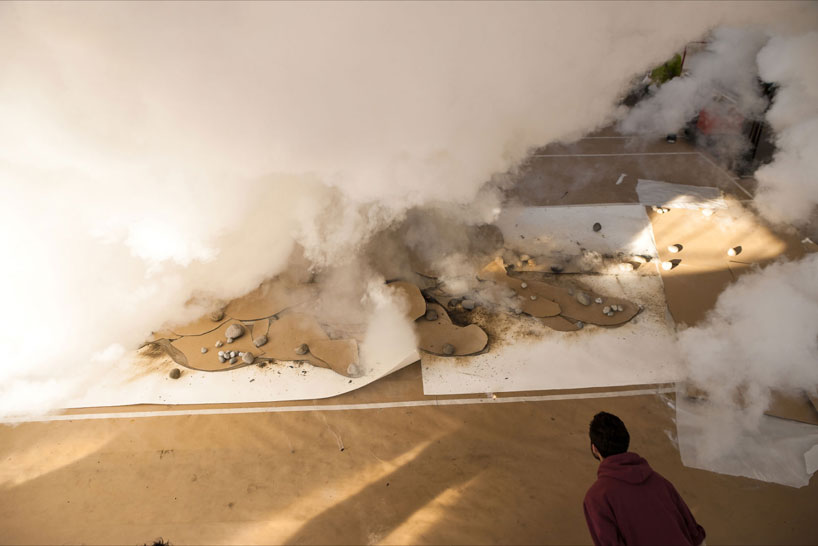 during ignition of pine tree, one of fourteen gunpowder drawings created by cai guo-qiang for the installation sunshine and solitude photo by diego berruecos 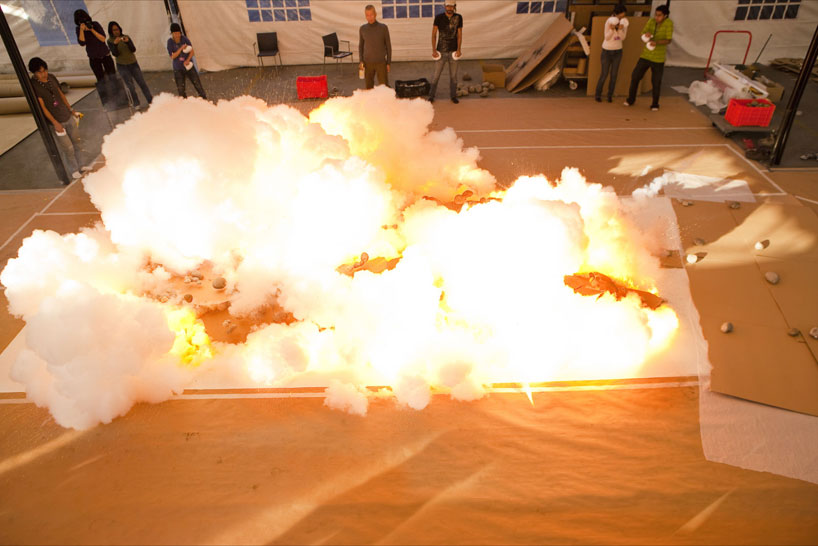 cai guo-qiang during ignition of pine tree, one of fourteen gunpowder drawings for the installation sunshine and solitude. photo by diego berruecos 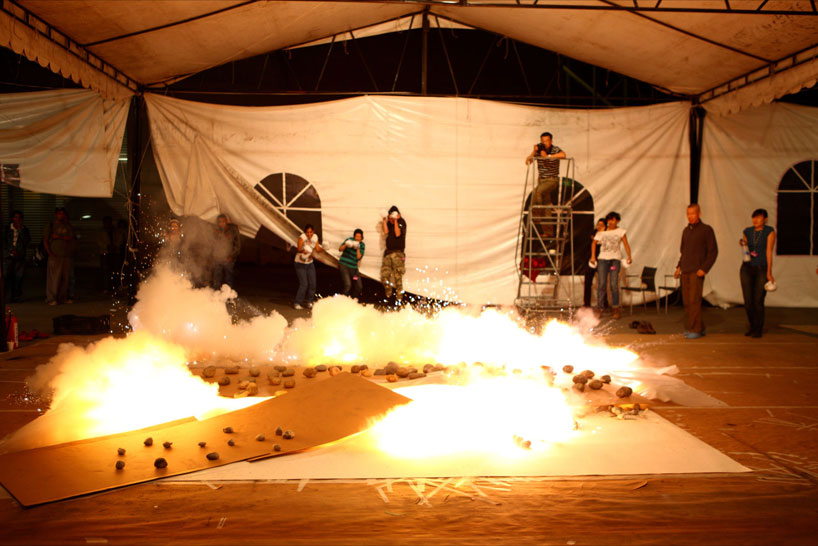 photo by diego berruecossunshine and solitude presented a highly theatrical and self-consciously artificial panoramic landscape. offering a symbolic rendering of the mexican landscape that reaches back to the nation’s foundation myths as well as references to the geological conditions that allowed mexico city to be established in its present location; at the same time it also engages with contemporary mexico. 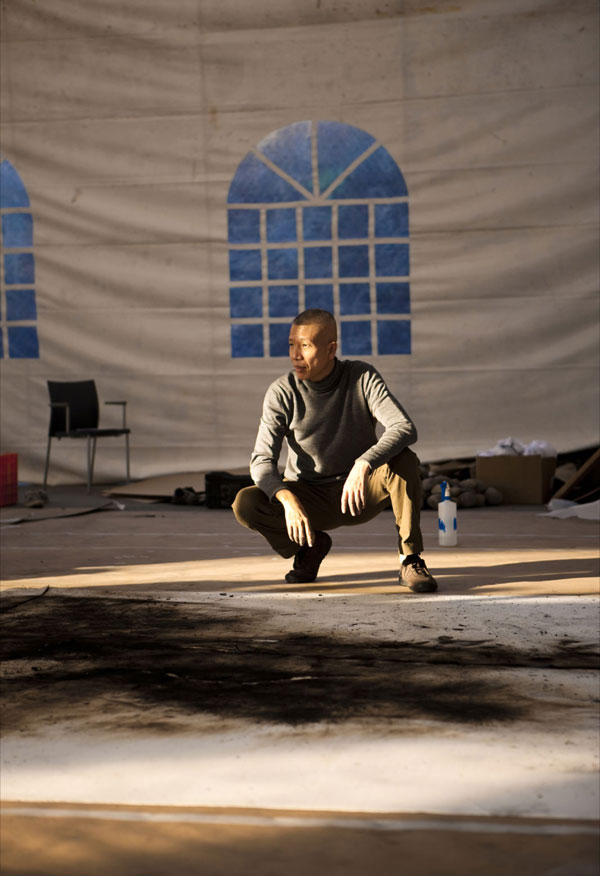 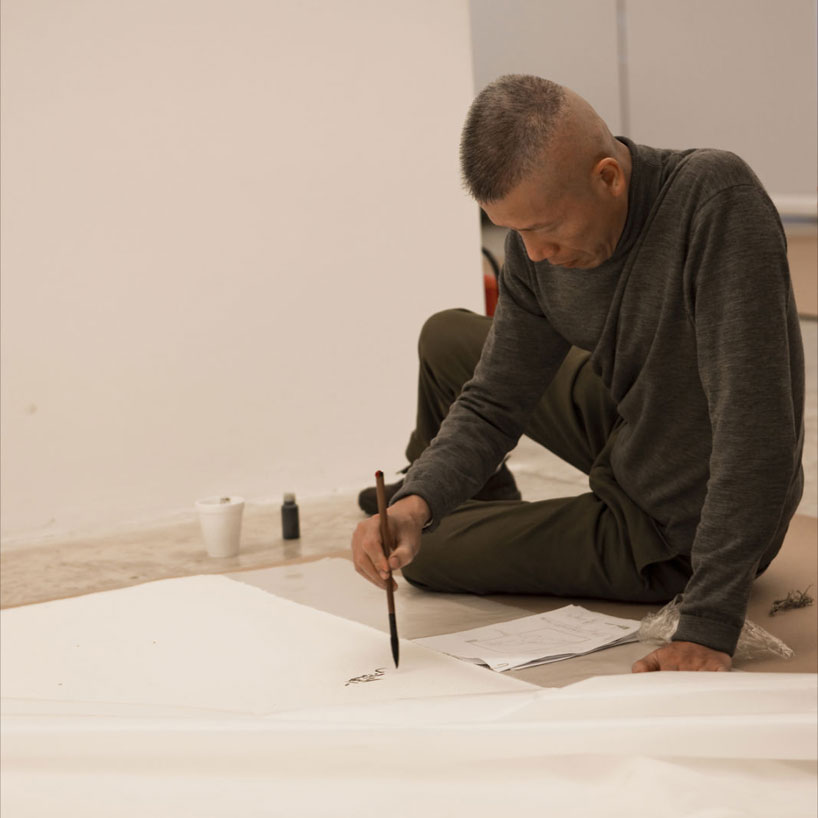 on the occasion of the exhibition, a bilingual (english & spanish) catalog was published, illustrated with photographs of the creation process of the gunpowder drawings as well as of final installation views. the catalog includes essays by the curator ben tufnell, scholars carlos mondragón and federico navarrete from the UNAM, and a statement by cai guo-qiang, where he describes his experience working in mexico and shares his thoughts about the exhibition. ‘sunshine and solitude,’ he says, ‘represents my sentiments towards mexico since my adolescence.  it is admittedly a subjective understanding of such a complex culture by an artist hailing from distant lands.‘ 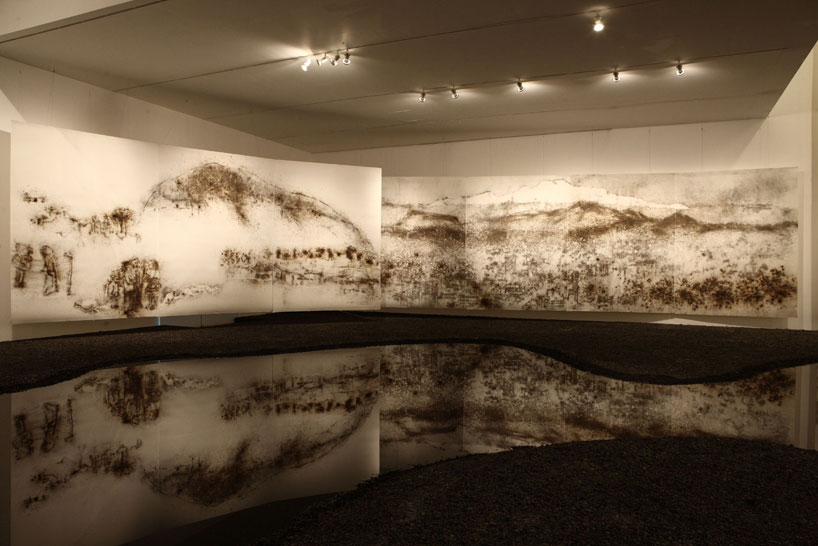 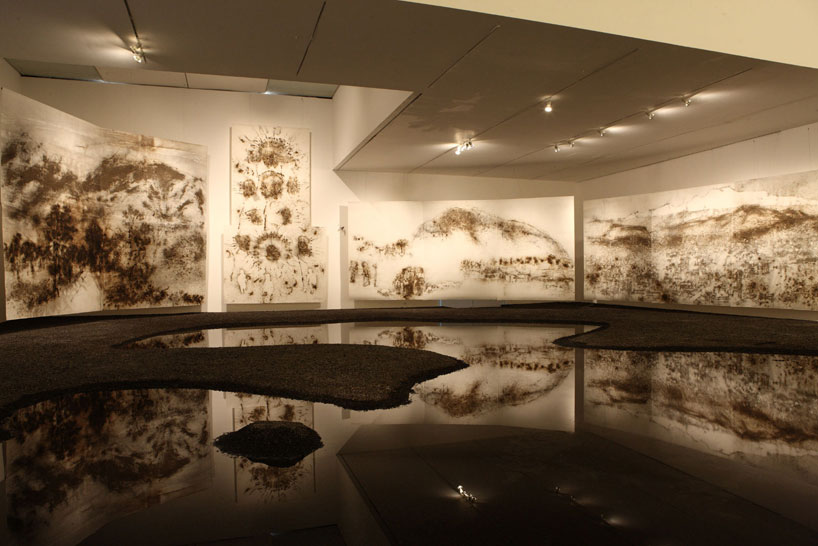 view of the sunshine and solitude installation by cai guo-qiang photo by diego berruecos ‘work that combines seriousness and playfulness’ cai guo-qiang is best known for his ‘explosion events’, gunpowder drawings, and large-scale installations. cai’s work explores ideas about identity, community, history and transformation, combining seriousness and playfulness to produce paradoxical results.   one of the key features of cai’s work is its ability to give body to destruction through processes in which matter is dematerialized and energy materializes. in his installations, explosion events and drawings, materials are often subjected to unexpected and sometimes violent transformative processes. cai’s art suggests that the world is mutable, that matter as well as mind exists in a state of flux, both subject to constant intuitive and inspirational changes. this change can be initiated by fire or light that consume themselves or by the paradoxical, poetic juxtaposition of different materials and ideas.

cai guo-qiang was born in 1957 in quanzhou, fujian province, china, where he grew up. he studied stage design at the shanghai theater academy from 1981 to 1985. in the 1980s he emerged as a member of the burgeoning experimental art world of post-reform china. while living in japan from 1986 to 1995, he began to explore the properties of gunpowder as a method for creating his drawings, an inquiry that eventually led to his experimentation with explosives on a massive scale and the development of his carefully choreographed signature “explosion events’ that incorporate fireworks and other pyrotechnics. these events have been mounted in important venues around the world including the great wall of china (1993), central park, new york (2003), and the tate modern, london (2003).

in 2010 cai received the first place award for best project in a public space for his work fallen blossoms from the international association of art critics. he was also a core member of the creative team for the opening and closing ceremonies for the beijing olympics in 2008. cai was awarded the 7th hiroshima art prize in 2007 and also received the golden lion at the 48th venice biennale in 1999.

Feb 06, 2019
cai guo qiang to ignite a volcanic work of art recalling the destruction of pompeii