currently on show at the musée d’art moderne et d’art contemporain (MAMAC), nice is an exhibition entitled ‘travels in the mediterranean’, showcasing the work of chinese contemporary artist, cai guo-qiang. divided into three sections, on show are five video installations, a new gunpowder drawing entitled ‘travels in the mediterranean’ and his large scale installation ‘reflection – a gift from iwaki’.

‘reflection – a gift from iwaki’ is a giant 15-meter-long excavated wooden boat, filled with broken porcelain pieces. the project is reconstituted for each exhibition it is presented at, by seven fisherman from the small seaside town of iwaki, in japan. the work welcomes visitors to embark on spiritual and sensory voyage of sorts. the installation is also composed of white porcelain which comes from the county of dehua in the province of quanzhou in china.

in 1994, cai collaborated with a group of volunteers from iwaki to excavate an abandoned wooden boat from the local beach, reconstructing it and then exhibiting it at the iwaki city art museum. then in 2004, the 10th anniversary project ‘reflection – a gift from iwaki’ commemorated their collaboration. on this occasion, the iwaki volunteers excavated another wooden boat.

for each presentation of ‘reflection – a gift from iwaki’, the same group of volunteers from iwaki accompany the boat to each site ti install the piece. for the exhibition at MAMAC the iwaki volunteers take this well-travelled boat, originating from japan, to the mediterranean, once again collaborating with cai to install the boat in the coastal city of nice. 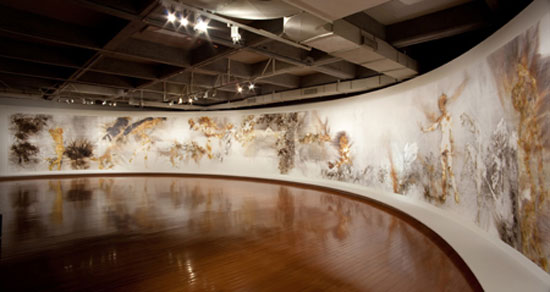 throughout his work, cai often employs gunpowder as a predominant material, manifesting itself into drawings as well as explosion projects. for his newest gunpowder drawing ‘travels in the mediterranean’, cai invited a female student from his alma mater – shanghai drama institute – to join him in nice, france to tour the french riviera. by experiencing the mediterranean through the eyes of a young lady 30 years his junior, he has collaborated with the girl conveying her feelings and experiences from the journey into his latest gun powder drawing. the content and themes of the drawing are derived from the young lady’s choice. the french artist and nice native yves klein used the female body as his paint brush in the 60’s where as here, cai employs a woman’s sentiments and aesthetics in his creative process. the gunpowder drawing installation of their mediterranean travels, serve as a product of the event itself, while the actual artwork lies in the entire process of the journey, filled with unexpectedness and unpredictability, in which cai engages in his intended dialogue with klein. 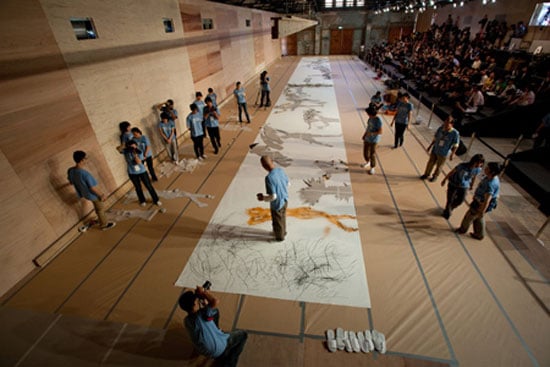 the creation of the gunpowder drawing for MAMAC was an event that was open to the public who were invited to participate, engaging in a collaborative exchange with cai. within the exhibition space, a curved wall has been built to display the final drawing and in the centre, a reflective pool has been constructed, with the edge of the pool higher than floor level. a number of mediterranean-style toy boats float on the water, and a small electric fan blows on its surface, creating ripples. a monitor is mounted on the wall across from the exhibition area, playing video documentations of the making of the gun powder drawing. 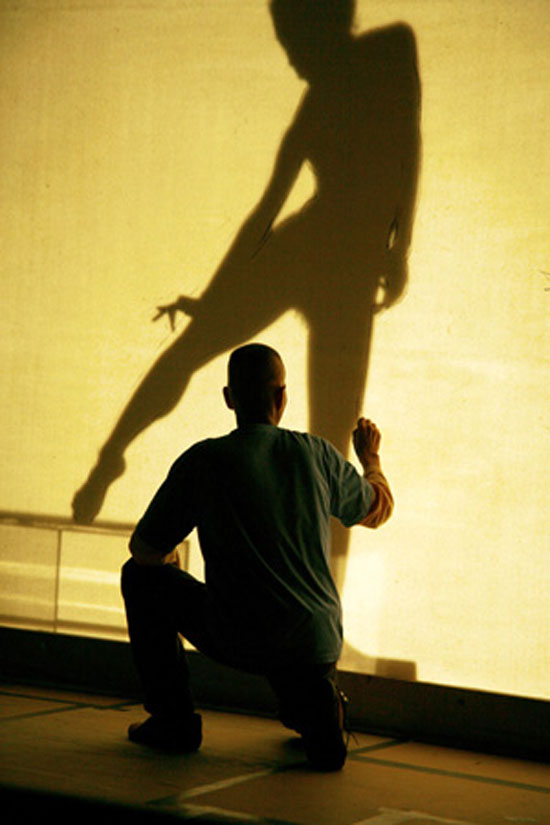 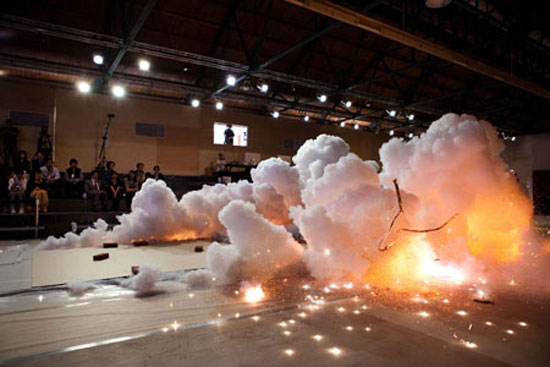 the last area of the exhibition is a presentation of five video installations that feature cai’s collaborative projects with engineers, fire wardens, police officers, students, various governments and the general public. the videos being shown are: ‘fireworks for the opening ceremonies of the 2008 beijing olympic games’, ‘explosion events 1990-2002: projects for extraterrestrials’, ‘gunpowder drawing making process’, ‘live public creation of the gunpowder drawing day and night’ and ‘black fireworks’.

each gallery is connected with hallways, in whic studies of cai’s creative journies will be on show. 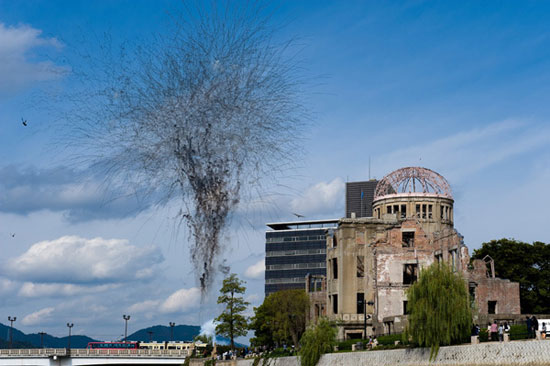 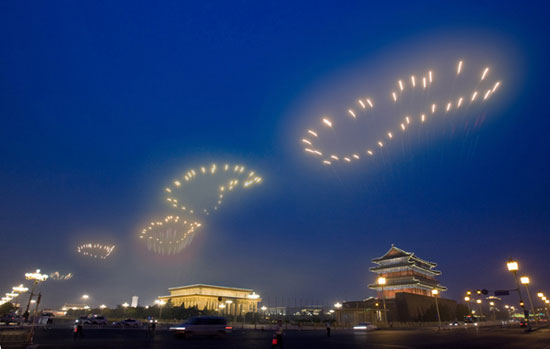 cai guo-qiang footprints of history: fireworks project for the opening ceremony of the 2008 beijing olympic games, 2008 fireworks commissioned by the inernational olympic committee and the beijing organizing committee for the games of the XXIX olympiad photo by hiro ihara / courtesy cai studio 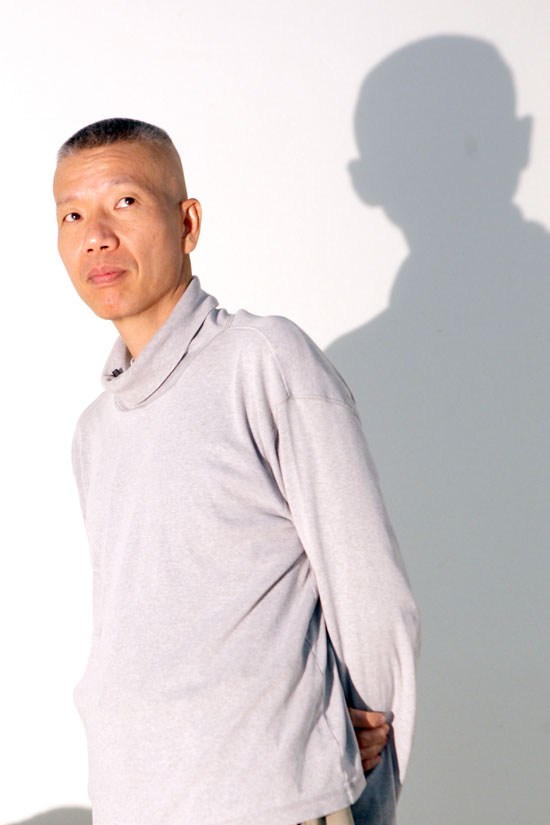 cai guo qiang was born in quanzhou, fujian province, china in 1957. between 1981 – 1985, he studied in the department of stage design at the shanghai theatre academy. in 1986 he moved to tokyo and then in 1995 transferred to new york where he now lives and works today. he has recently had solo exhibitions at the guggenheim museum, new york, the guggenheim museum, bilbao, taipei fine arts museum, and hiroshima city museum of contemporary art. his work is currently also on show at the new rockbund art museum in shanghai, featured as the institution’s inaugural exhibition that is entitled ‘peasant da vincis‘, and his installation ‘inopportune‘ is being shown at the 17th biennale of sydney.