chen zhen, together with chinese artists huang yongping and cai guo-qiang, disillusioned by post-maoist reform politics, left china in the mid-eighties. isolation, censorship, and constant repression by the chinese communist party constituted a tenor according to which a political threat was suspected to linger behind every new artwork, meanwhile the chinese avant-garde artists sought to create harmony by difference. as the door to the united states was closed to them, chen zhen went in 1986 to paris.

he was a boundary crosser, a ‘cultural homeless’. his work of communication and cultural confrontation unfolds the artist’s determined utopia of multicultural dialogue. ‘in fact, I’m becoming a hybrid man, an amphibian, why not?’ chen zhen 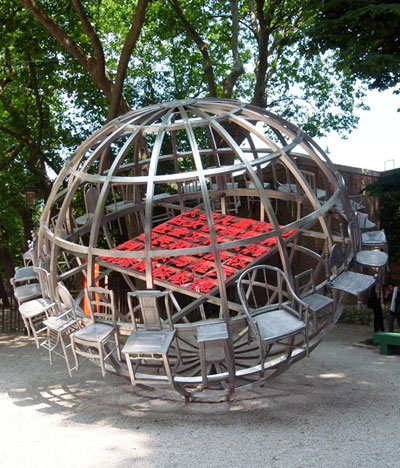