earlier this year, filmmakers claire & max isolated the façades of paris’ iconic architectural sites and recreated them as seemingly two-dimensional ‘props’. after a recent visit to new york city, the duo decided to create a second experimental short-film — ‘illusion’ — that continues the reconsideration of an urban landscape as a faux movie set. skyscrapers, public and residential buildings seem to be flattened from their original, structural form, propped up on metal and wooden frames.

the new york city envisioned by claire & max is entirely detached from reality — it is a huge movie set, displaying only building façades without depth. in this mysterious urban landscape, inhabitants have a strange characteristic: a virtual beam of light extends above them, tracking their every move within the city. ‘the place of man within society is one of the favorite themes in our work,’ claire & max describe, ‘with the theme of emptiness, abandonment, and human impact on the physical and social environment. while our [previous] film ‘appearances’ wondered if our society was only a world of appearances and a fake world, ‘illusion’ shares the same concept and further proposes the idea that we could be handled, like mere puppets.’ 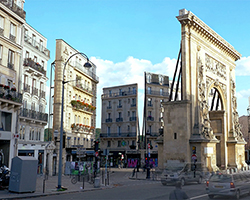