claude cormier + associés enhances the sky above st. catherine’s street, in montréal, québec, with eighteen hues of vibrant colors for his 2017 work titled,‘18 shades of gay.’ the installation created in collaboration with SDU du village and the ville-marie borough, is part of ‘aires libres,’ an annual festival held in montréal’s gay village. 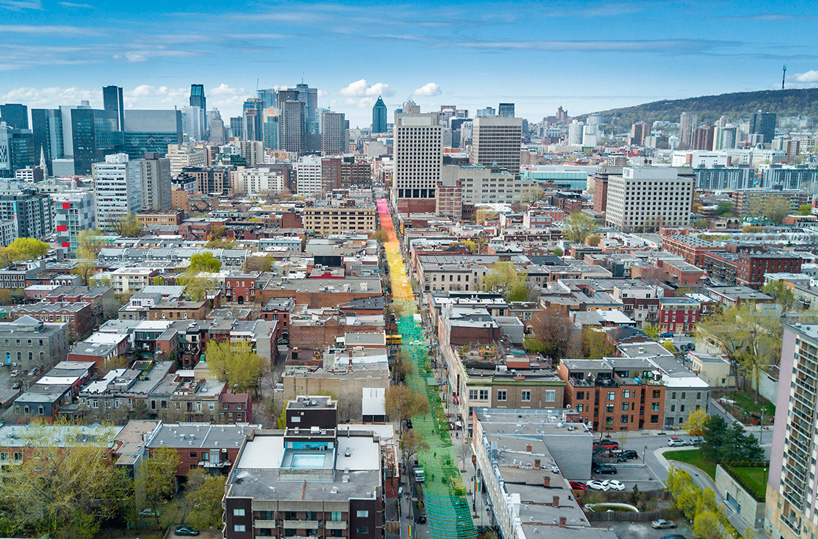 the artwork’s 1 kilometer span is made up of 180,000 resin-colored balls organized in an 18 tone sequence, each represented by an equal 10,000 spheres. the redesigned canopy stems from claude cormier’s earlier work ‘boules roses,’ a similar artwork installed in this location back in 2011. as the name implies, the earlier version contained the same resin balls all painted a uniform pink. with changes in the local atmosphere and the community — the art must adapt as well. 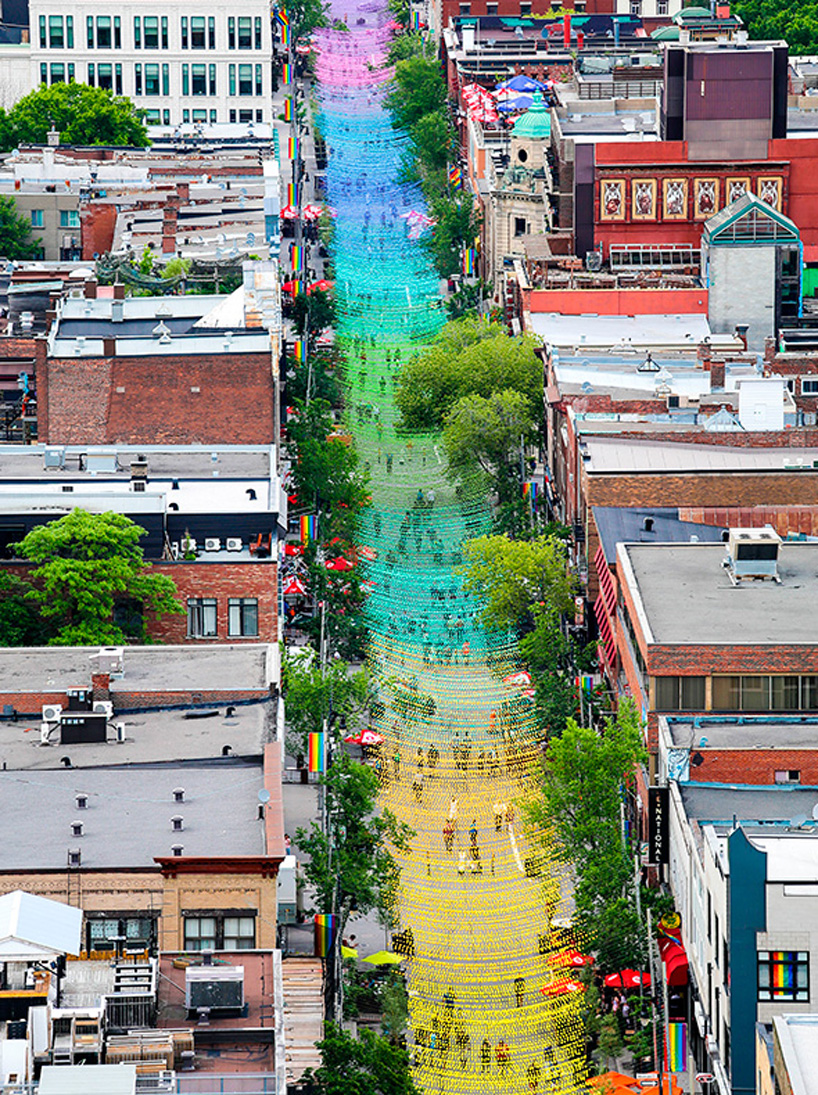 each of the 18 color hues are represented by 180,000 hanging resin balls

cormier describes the evolution of his artwork stating, ‘as gay culture evolves and the LGBT community becomes more nuanced, as attested by the addition of new letters, the diversity of tones to a redefined resin-ball canopy was an indisputable artistic choice… also, the concept of ’18 shades of gay’ is to some degree a reflection of this ongoing evolution…’ 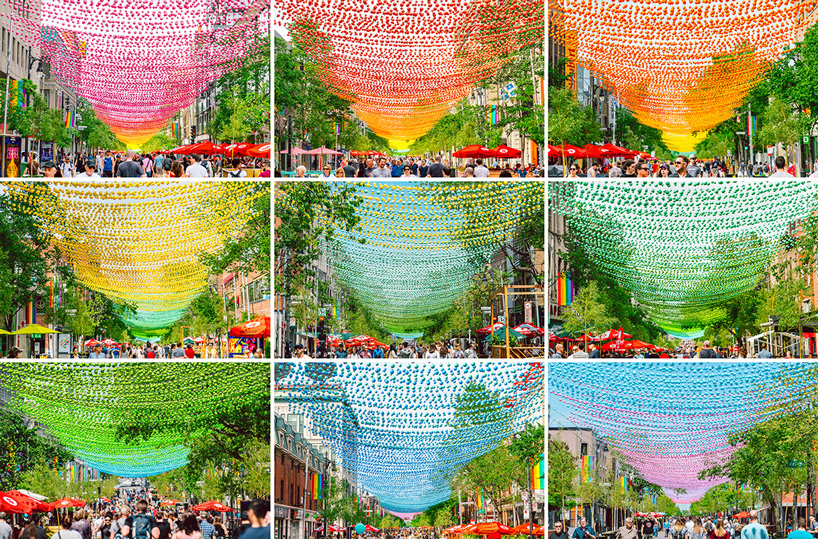 ‘color walk,’ the term used to describe this specific element of the aires libres festival, refers not only to cormier’s work, but the overall curatorial changes along the traffic-less street to enhance the pedestrian experiences. claude cormier + associés is a landscape architecture and urban design team dedicated to transforming and enhancing a space.‘18 shades of gay’ adds another exciting dimension to a visitor’s unfolding journey down st. catherine street. 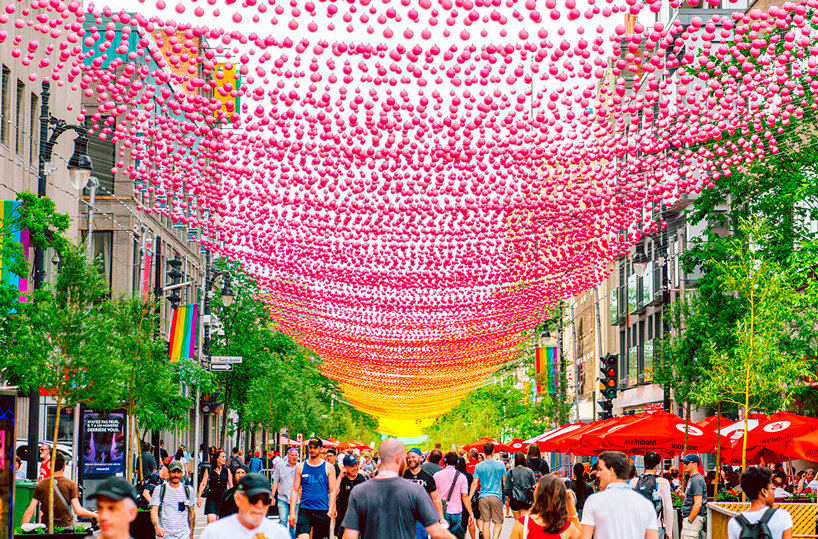 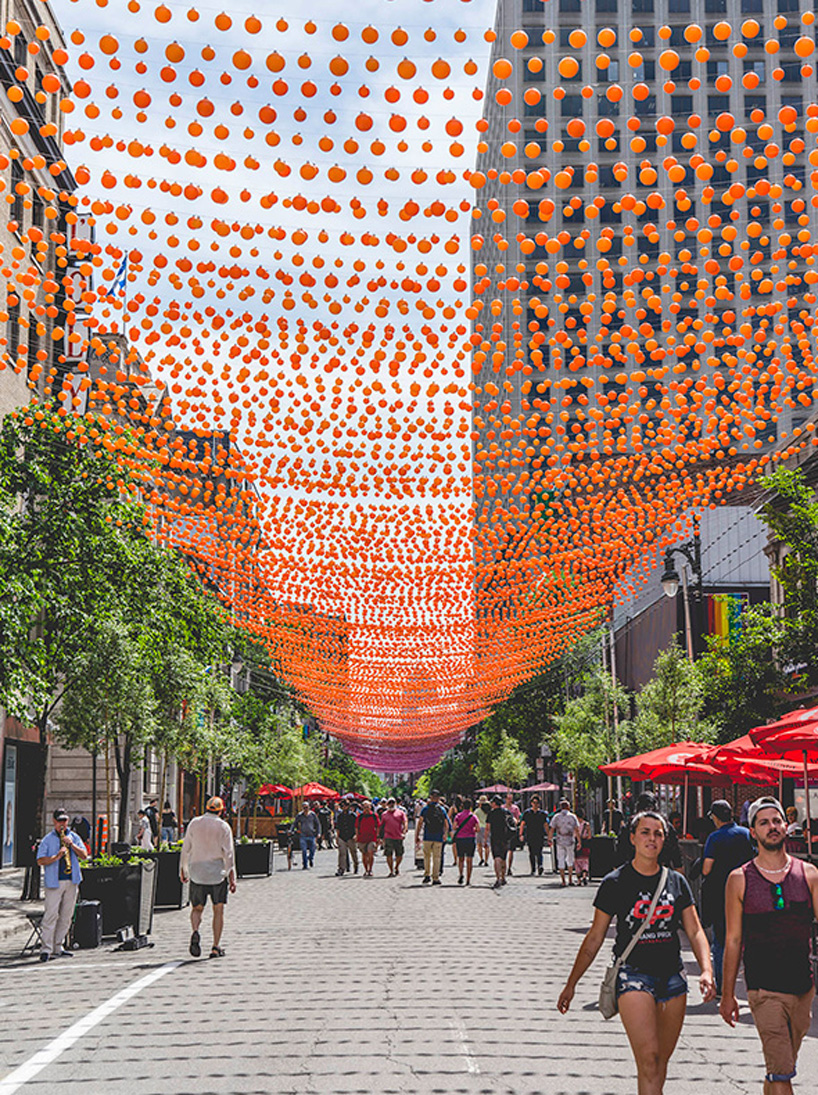 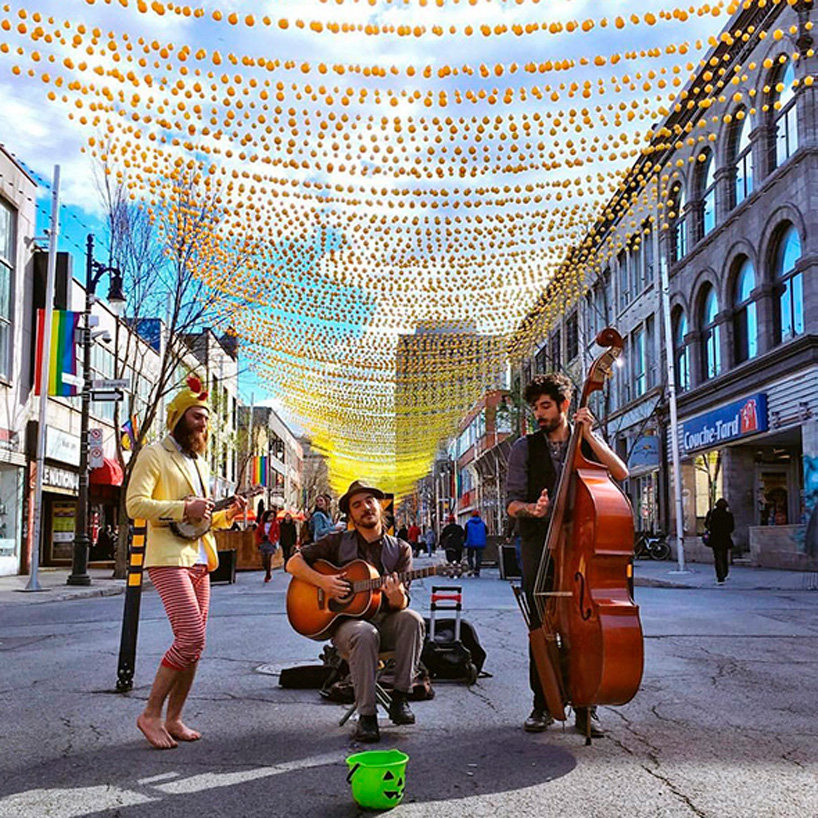 the street is closed to all traffic, making it a desirable hang-out space and community meeting point 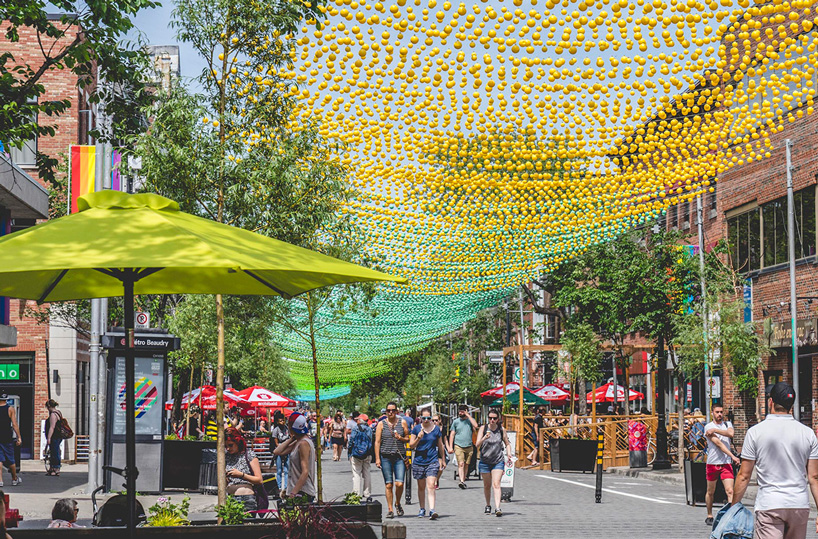 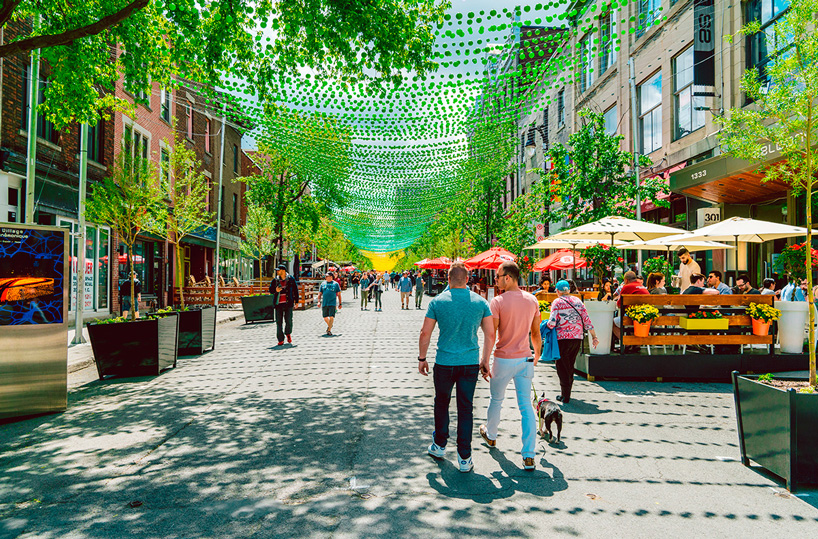 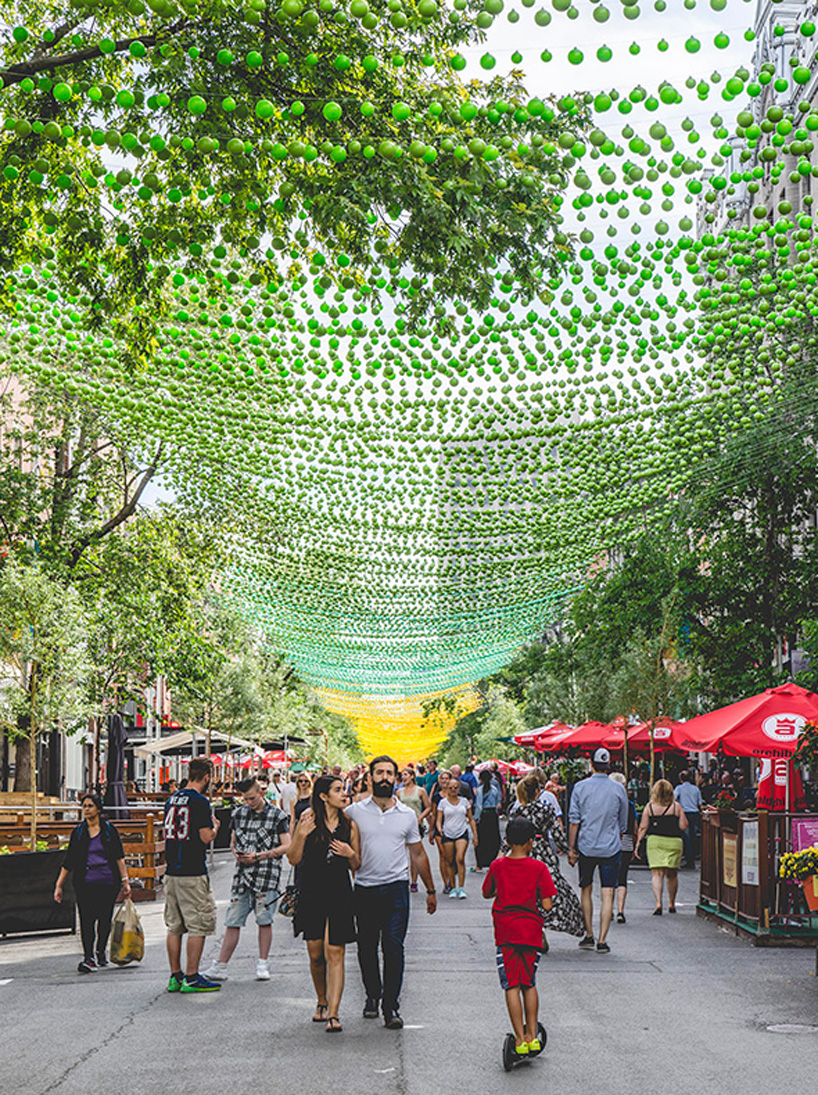 claude cormier + associés is a landscape architecture and urban design team based in montréal, québec 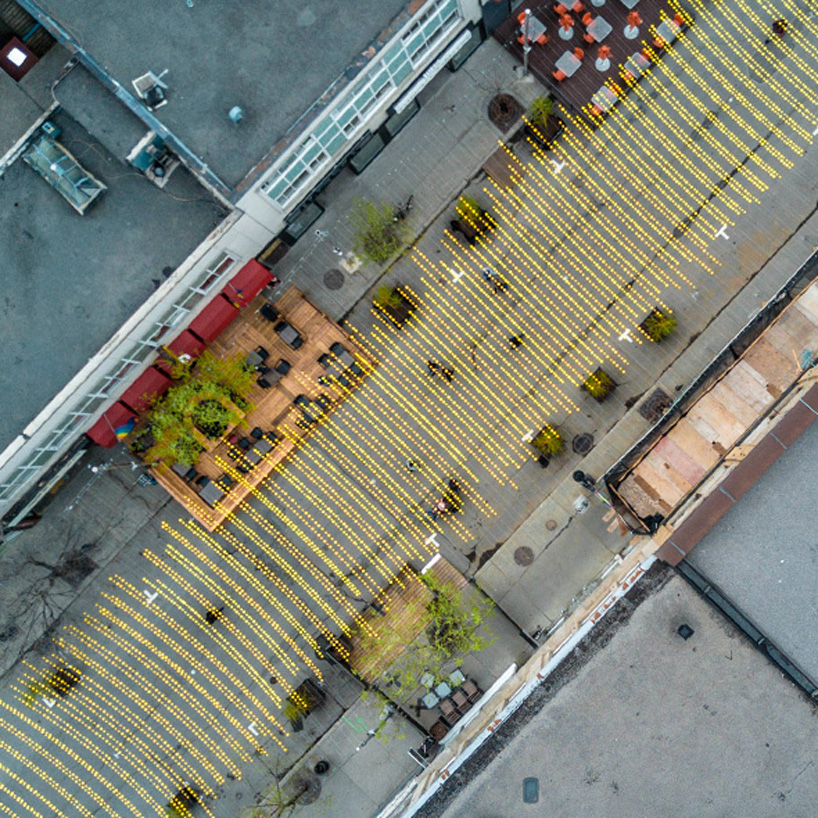 seamless transitions between the colored segments is made possible by intermingling colored, strands 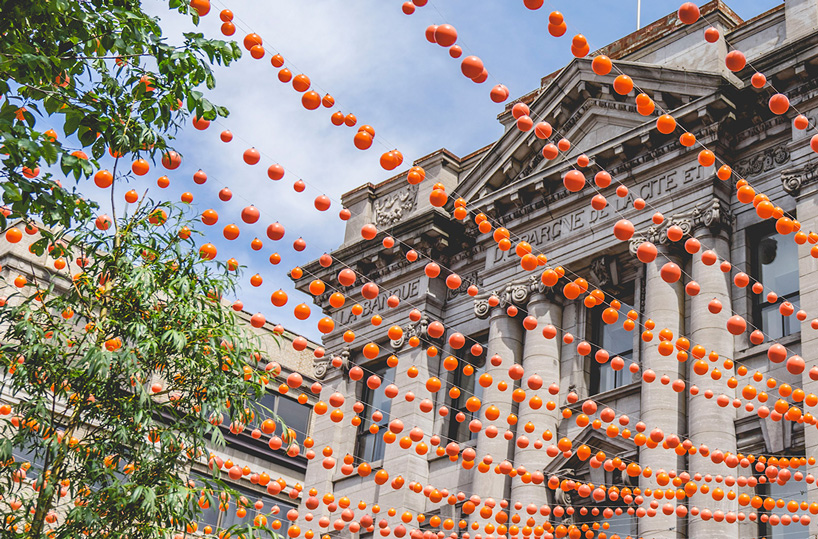 the installation is in collaboration with SDU du village, the ville-marie borough, and aires libres