before its official opening on august 9th, the shigeru ban-designed aspen art museum — which designboom has just revealed images of — is sparking controversy over one of its inaugural exhibitions: chinese artist cai guo-qiang‘s ‘moving ghost town’. a debate ensues regarding the three african sulcata tortoises used in the installation, which have each been mounted with two iPads on their backs. they have been rigged to carry the electronic units around an enclosed pen of turf, transporting the tablets on the exterior of their shells. appearing on the screens is video footage of three local ghost towns, which were filmed by the creatures, described by the museum as ‘forgotten stories of the once prosperous ghost towns retold from the tortoises’ perspective. the museum goes on to say that ‘the use of the iPad and its mounting method is a reduced version of the method employed by scientists and researchers who study the animals in the wild. the silicone material is noninvasive and removes easily and cleanly without damaging the tortoise’s shell.’

an online petition against the installation is quickly gaining momentum on change.org: ‘take the ipads off the tortoises’ is requesting the exhibit be aborted saying ‘the tortoises that you have in your new display in the new aspen art museum have had ipads attached to their shells and must endure the weight of 2 ipads on their back as they walk around in the sun showing slides of old aspen in the name of art. since when is animal abuse art? we must all rise and stop this now. there is no excuse for this!’ 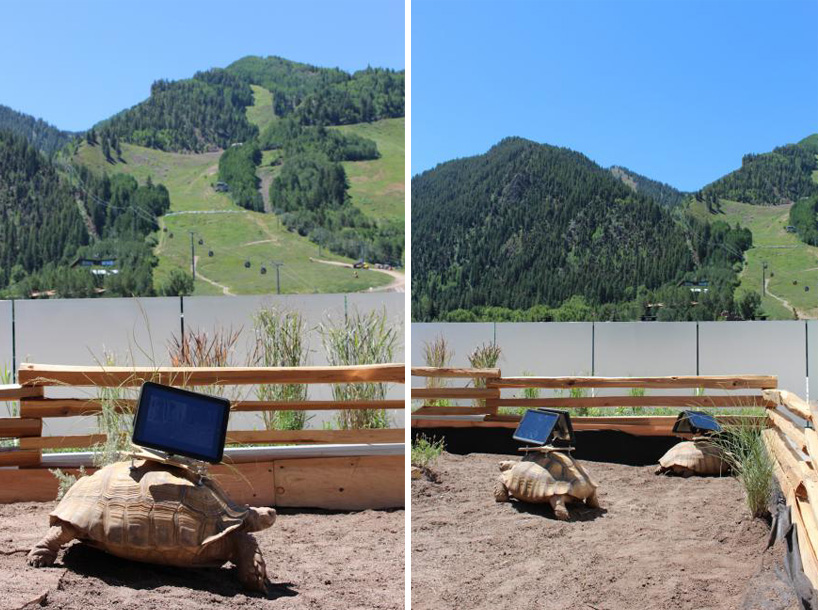 regarding the public concerns, spokesperson sara fitzmaurice of the aspen art museum has responded: the aspen art museum is a contemporary art museum that provides a platform for artists to present their artistic vision with a freedom of expression. that free expression can take many forms, and it is not the museum’s practice to censor artists. cai guo-qiang’s installation features three african sulcata tortoises which were rescued from a breeder where they were living in an over-crowded enclosure and being over bred. the three are being closely monitored, cared for, checked by a local veterinarian at regular intervals, and are being exhibited in consultation with the turtle conservancy. following the end of the exhibition on october 5, the tortoises will find new homes in conservation and educational facilities selected in collaboration with the turtle conservancy.

local aspen vet dr elizabeth kremzier, who is caring for and monitoring the tortoises also responds: I have worked with the staff from the aspen art museum since the initial planning phase of the cai guo-qiang project. without question, the welfare of the tortoises has taken the highest priority in every stage of this exhibit. the environmental and nutritional needs of the animals have been met and are monitored closely. environmental enrichment has been provided, and every attempt has been made to minimize stress on the animals. in my opinion, the tortoises have adapted well to their new habitat, and the i-pads have not interfered in any way with their natural behavior. 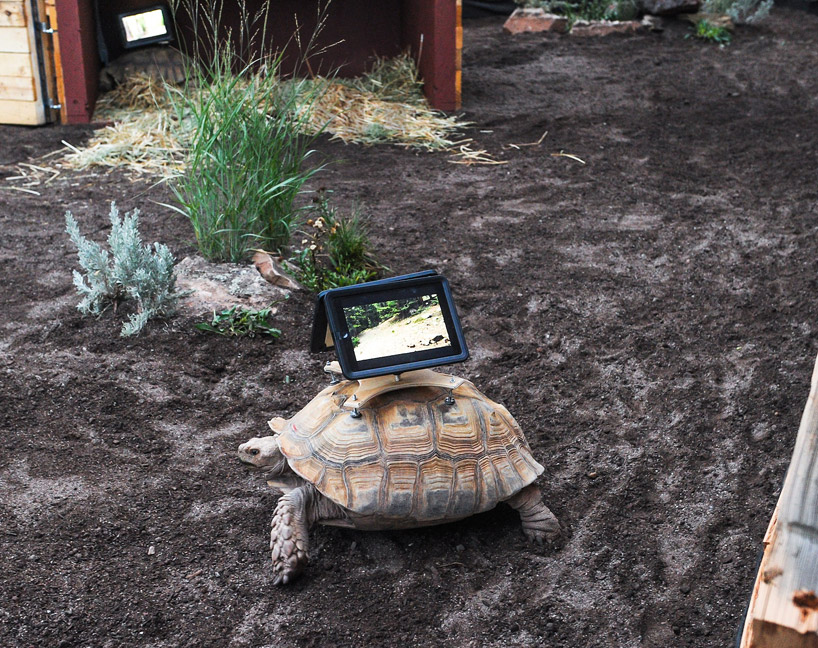