during miami art week 2019, swire properties — the visionary developers behind the city’s billion dollar mixed-use landmark, brickell city centre (BCC) — is continuing its strong support and contribution to creative culture with its annual art exhibition. this year, the exhibition takes over parts of BCC’s open-air shopping center by disrupting some of the complex’s public areas with artistic interventions and creative happenings. titled ‘conversations with nature’, the showcase has been curated by albie alexander as an introspective homage to mother nature. free and open to the public, visitors are invited to take their own route across site-specific installations and artworks, multidisciplinary experiences and interactive programming. 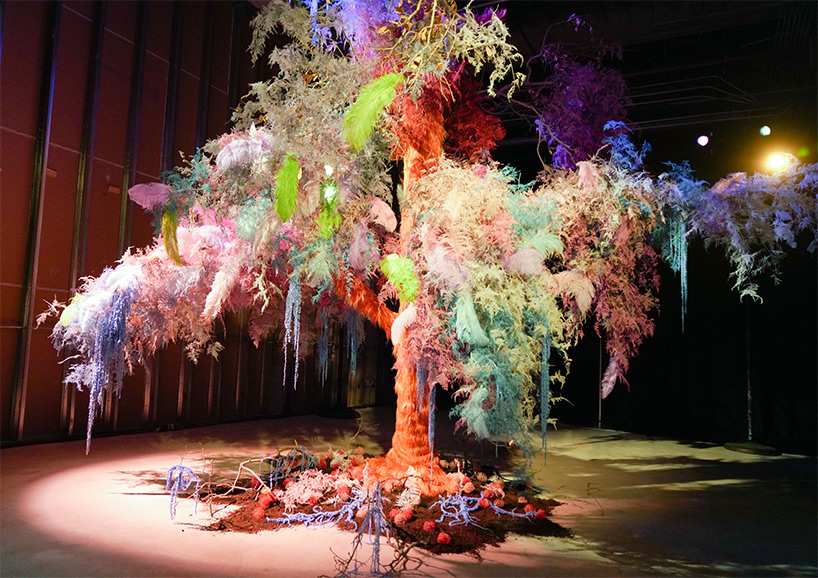 alexander has conceived ‘conversations with nature’ to explore themes of activism and healing, investigating the idea of mindfulness in an effort to develop new understandings of our visions of the future. over the course of four days — december 5 – 8 — renowned and rising artists, art-activists and thought leaders present a series of installations and participatory programming that beckon visitors to experience interconnectedness with both each other and the earth — in turn, inspiring positive action in the fight against climate change. 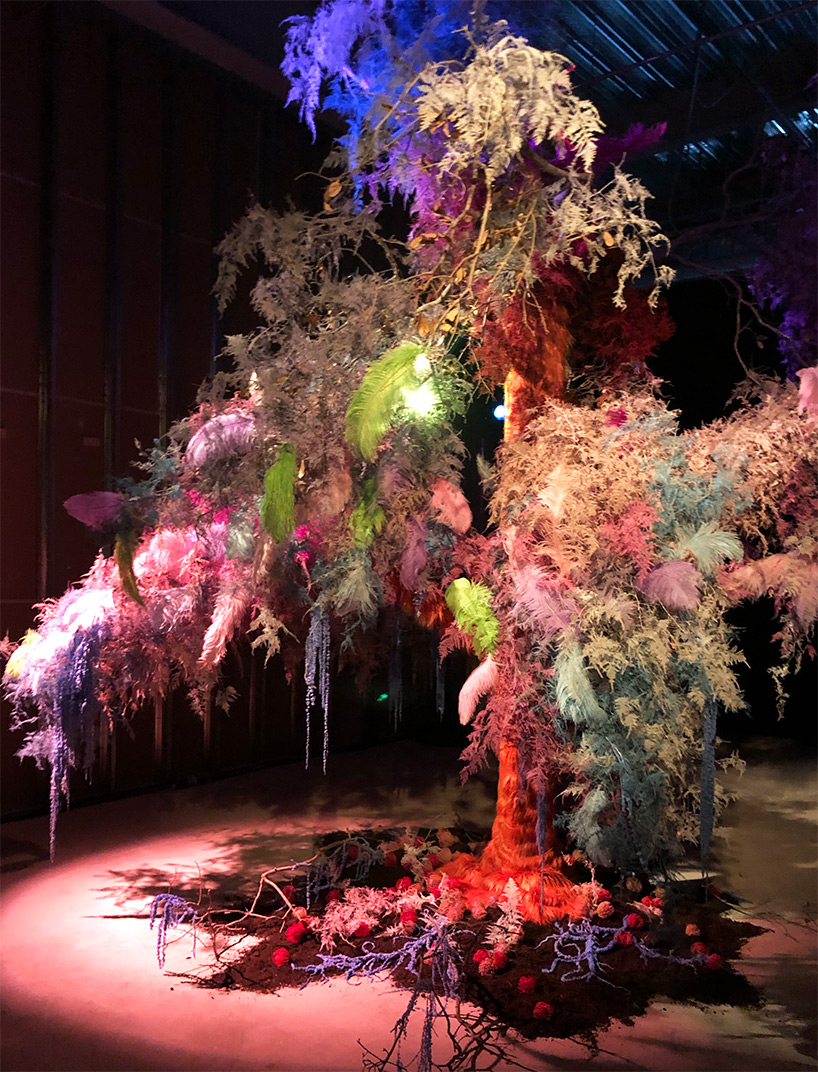 ‘nature provides us with spaces of healing, and we need to preserve and protect them,’ said albie alexander, creative director of conversations with nature. ‘the natural world has cradled our existence and has been our greatest provider and reflector throughout history. as we face the beginning of a climate and environmental crisis unlike anything we’ve seen, it casts a new light on our relationship with the overwhelming noise of the modern world and reflect on the relationship between themselves and nature in an effort to humanize the ecological crisis more and inspire transformative action.’ 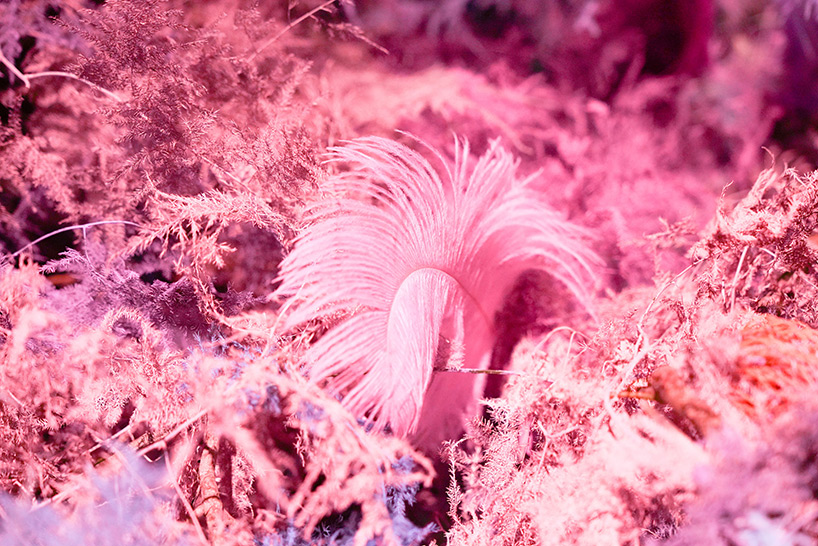 upon arriving at BCC’s second floor, visitors find ‘inner landscapes’ — an immersive installation that results from the creative collaboration between brittany asch of BRRCH, and yrsa daley-ward. asch — widely known for her otherworldly floral installations — has transformed ethically-sourced fallen botanicals into a stunning and surreal ‘fantasy tree’ adorned with vibrant flora and feathery leaves. as visitors enter the exquisitely-illuminated space, they are given headphones on which original poetry by yrsa daley-ward resounds. the spoken word serves as a personification of mother nature herself — a notion deeply felt as the poetry and fantastical floral landscape touchingly converge. 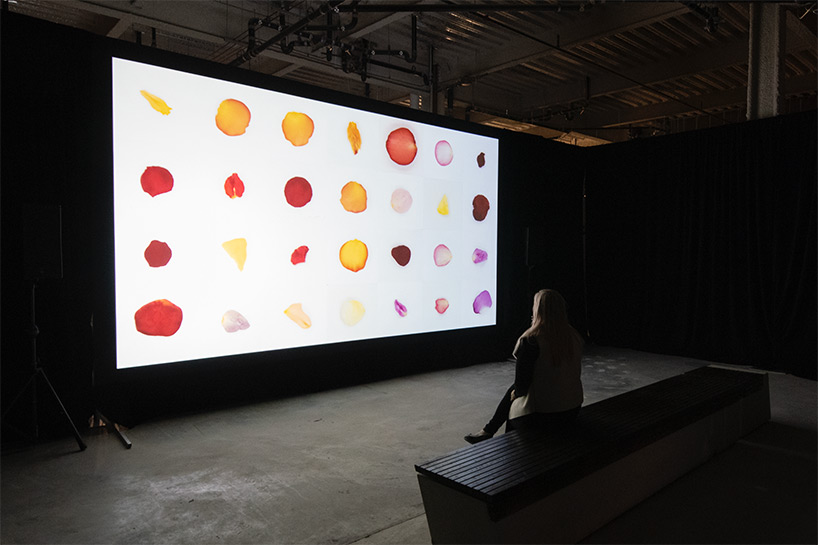 on the third floor, visual artist sarah meyohas makes a poignant commentary on the state of our world with an introspective installation titled ‘cloud of petals’. visitors are invited to enter an enclosed and minimal space within which they can take a seat and watch a meditative film. the film follows 100,000 unique rose petals as they shift from states of absence to presence — a moving commentary on the fragility of nature. as ‘cloud of petals’ plays, a powerful monologue from greta thunberg resounds throughout the space, asking visitors to reflect on their own relationship with the natural world.

the film follows 100,000 unique rose petals as they shift from states of absence to presence

also on level three of brickell city centre is greta thunberg’s #fridayforfuture artivism studio. in august 2018, the viral movement #fridayforfuture began after activist greta thunberg sat in front of the swedish parliament every school day for three weeks in protest of the lack of action around the climate crisis. at BCC, visitors are invited to participate in conversations with nature’s ‘artivism studio’, where they create their very own protest art for fridays for future miami — focusing on coordinating peaceful climate strikes in the city. the participatory installation centers around a large, bold work station that features graphics and artwork sourced from previous demonstrations. 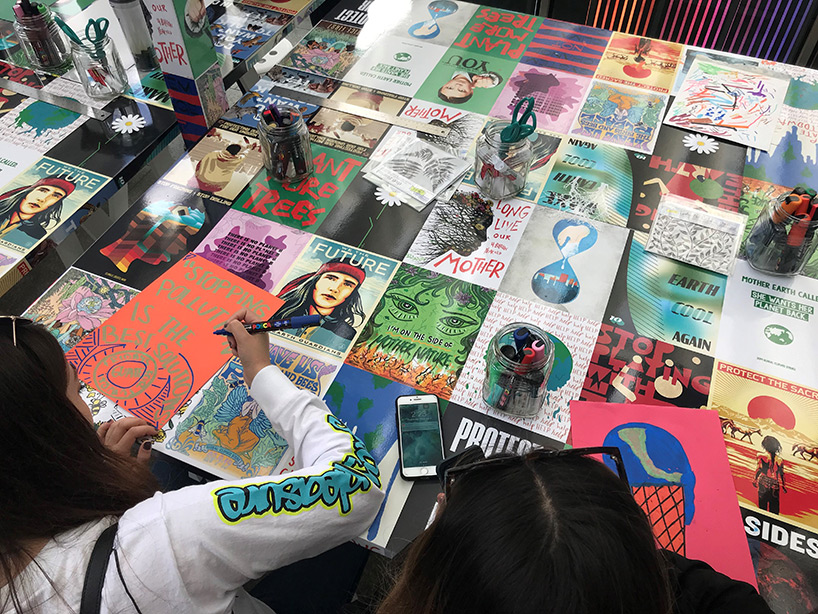 giving a voice to young, rising artists and inviting them to engage in the conversation, students from miami international university of art & design were selected to produce original works for the exhibition. sinead aleung, emily gonzalen and raquel zabib have transformed recycling bins into canvasses of creative expression around the theme of environmental activism. placed in BCC’s open-air public areas, each artwork confronts the core of the climate change movement with an experimental and exploratory approach towards collage, painting and sculpture. 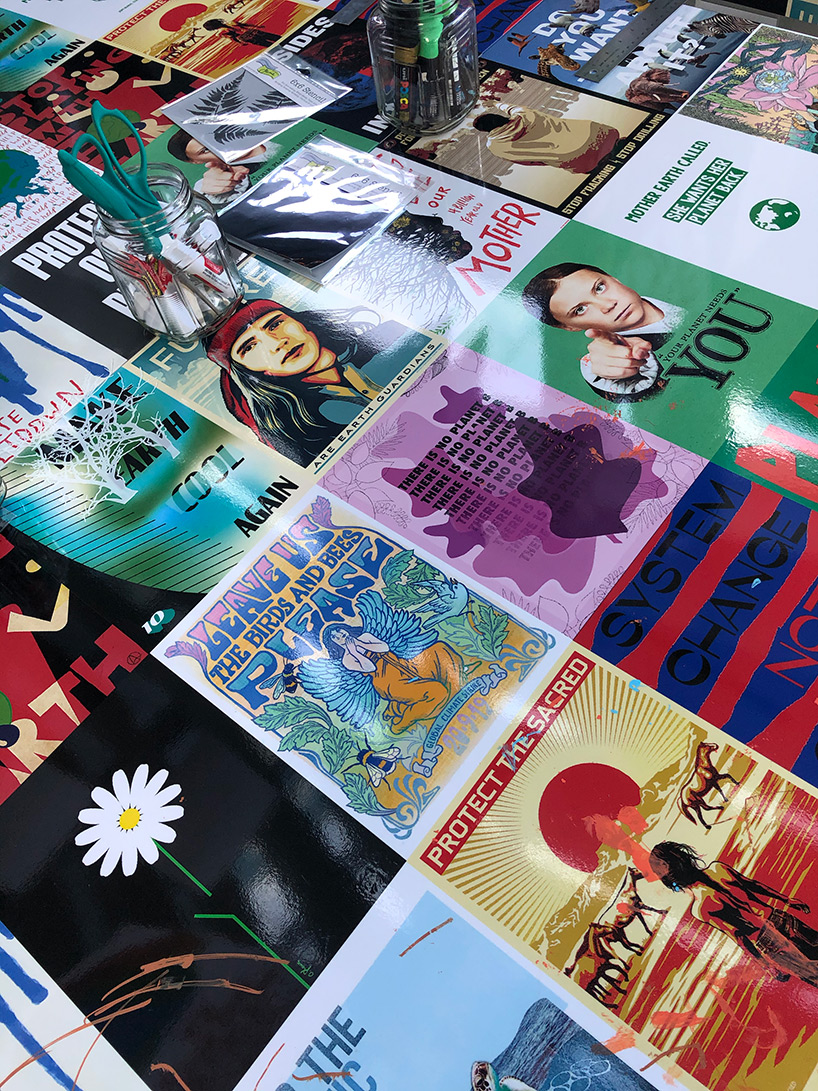 working at the intersection of art and environmental activism, brooklyn-based artist basia goszczynska presents two installations at ‘conversations with nature’. ‘legacy forest’ comprises a population of towering plinths resembling human figures and trees made from marine debris and recycled materials. raising awareness around consumption and waste, the installation references rising pollution and hurricane patterns, correlating our habits of wastefulness and overconsumption of plastic with the global warming crisis. 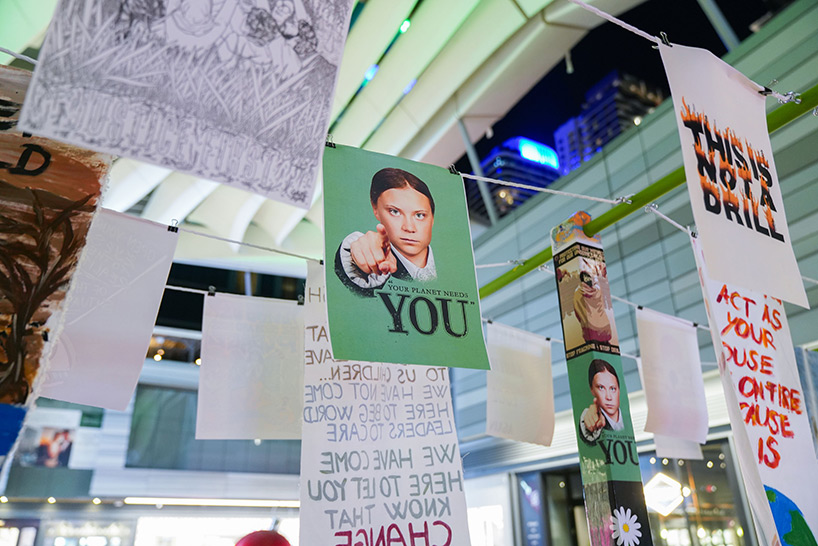 one level below, goszczynska has created a huge-scale sand pit titled ‘legacy oasis’, contaminated with a collection of microplastics, marine debris and beach toys. visitors are invited to enter and walk through the sand-filled installation littered with marine waste, and imagine the possible future of our beaches if we don’t urgently take action. participants can also sift through the microplastic-contaminated sand themselves, and speak with the artist about environmental issues. 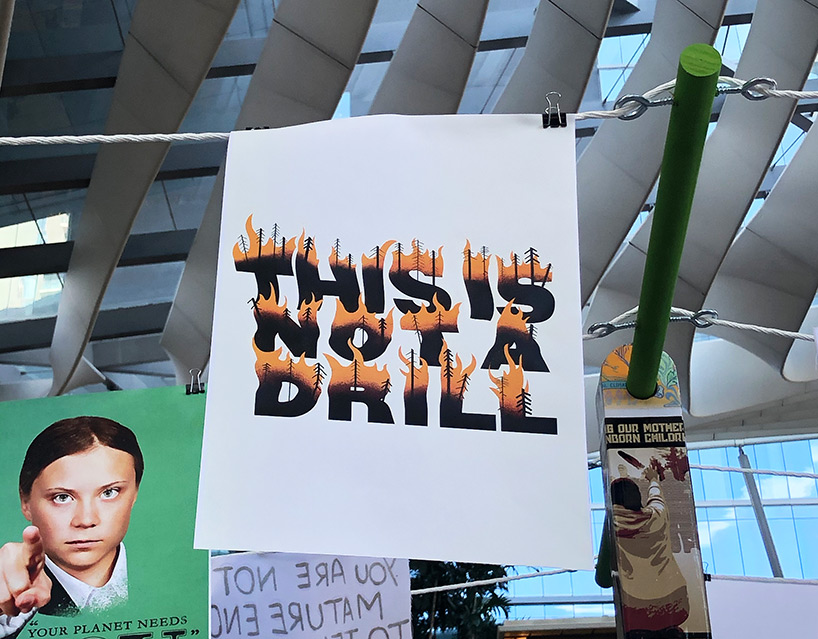 graphics and artwork from past demonstrations hangs overhead
image © designboom

finally, a BCC storefront has been transformed into a space for reflection and healing by laraaji — musician, mystic and laughter meditation practitioner — and maryam ajayi — an energy healer. envisioned as an inclusive meditation den, the oasis within the retail destination hosts a series of 45-minute workshops daily led by laraaji and ajayi, anchored around the elements of earth, air, fire, water. various practices such as reiki therapy, aromatherapy, guided meditations, and sound baths allow visitors to reflect on the world around them, and live their best life. 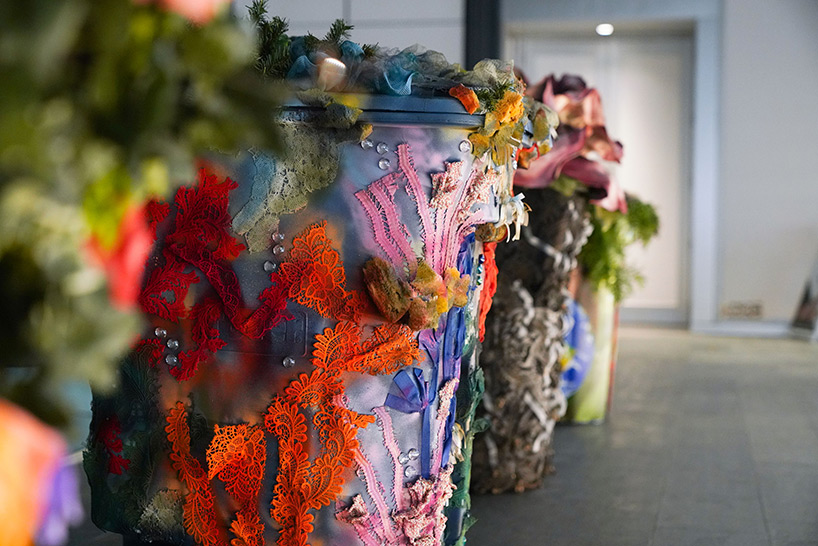 through ‘conversations with nature’, brickell city centre creates a space to reflect on humans’ relationship with the modern world and contemplate our understanding of nature through powerful and participatory works that are both touching and thought-provoking. ‘conversations with nature is a poetic representation of these two principles, and we are honored to work with albie and his team to bring it to life,’ says said kieran bowers, president of swire properties inc, the developer behind brickell city centre. ‘our ultimate goal is for brickell city centre to act as gathering space for the sharing of ideas and experiences for the community.’ 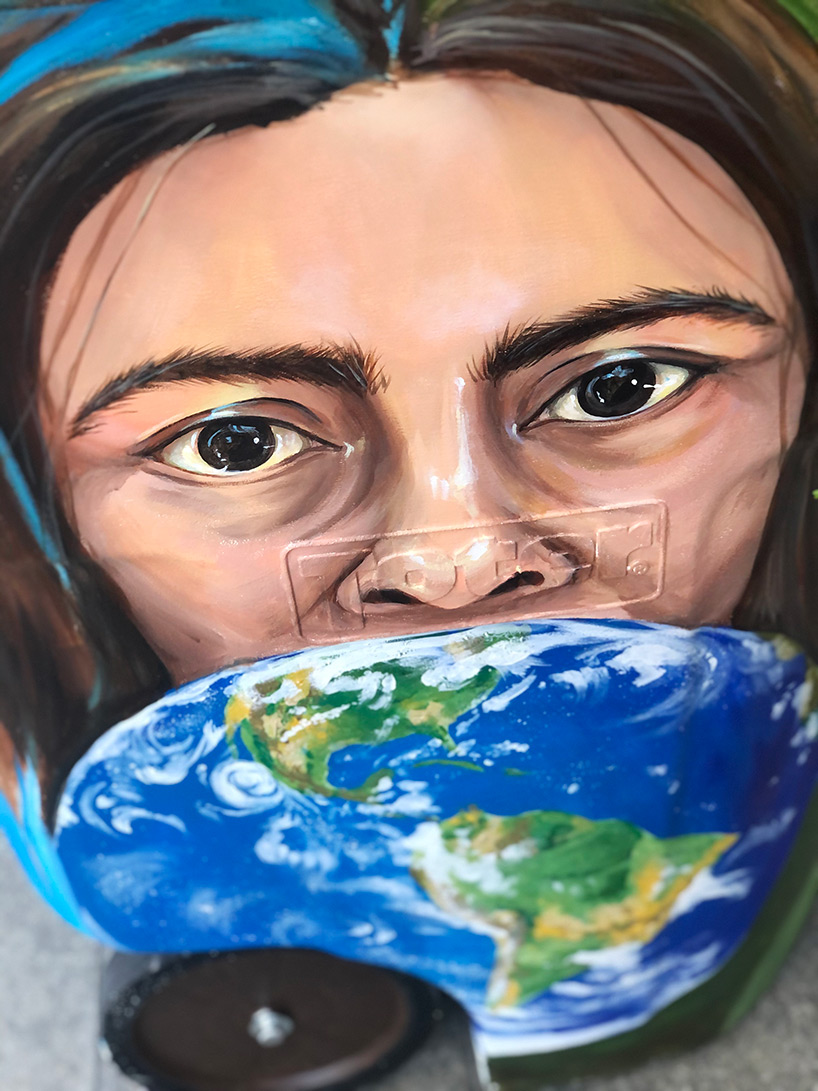 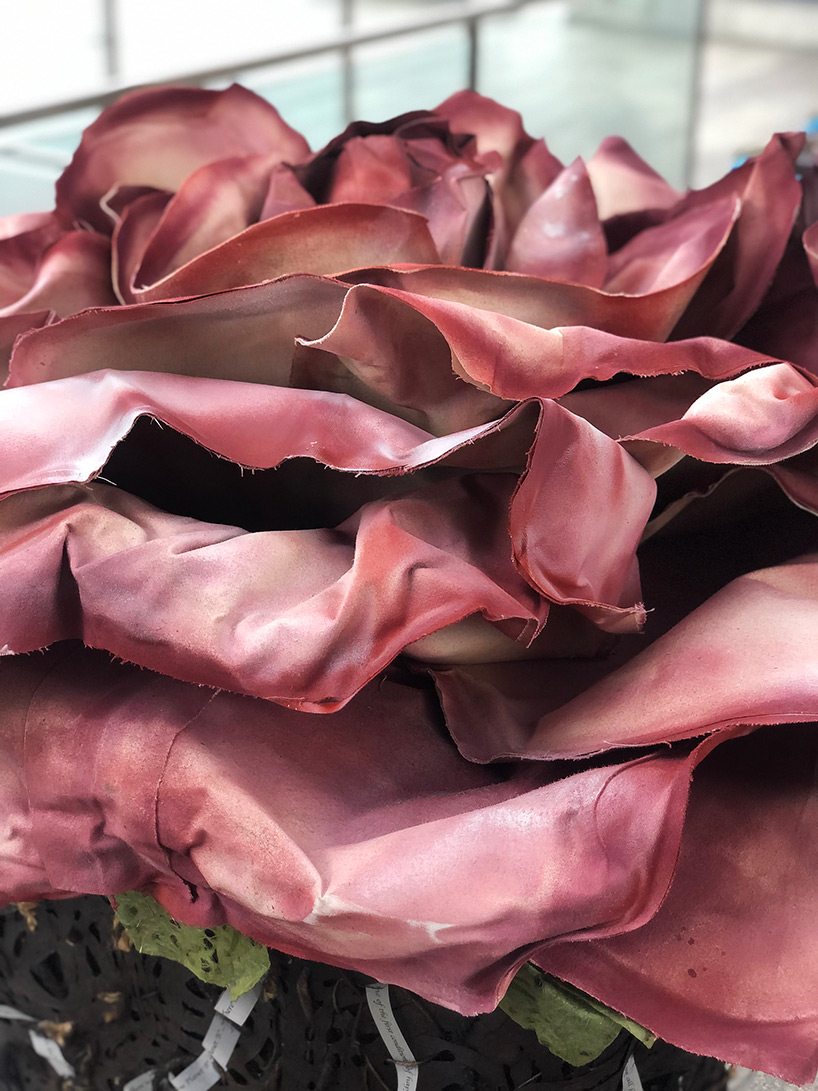 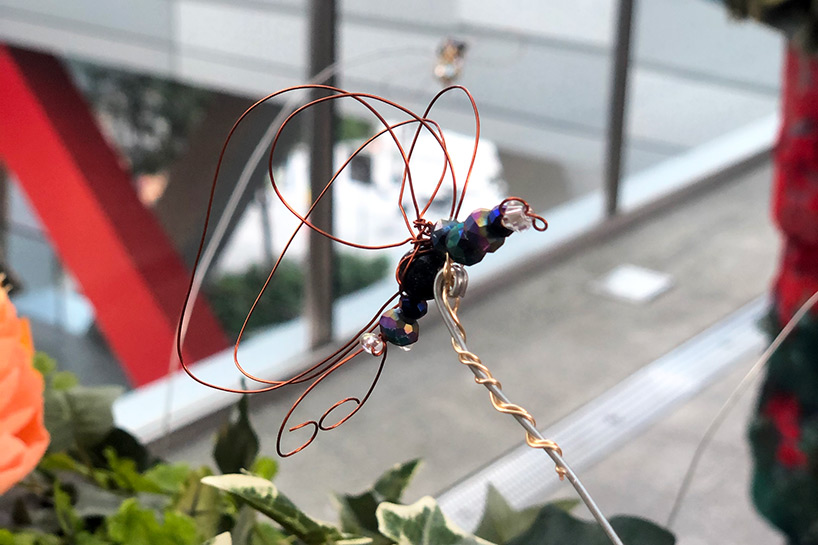 the projects feature an experimental and exploratory approach towards collage, painting and sculpture
image © designboom 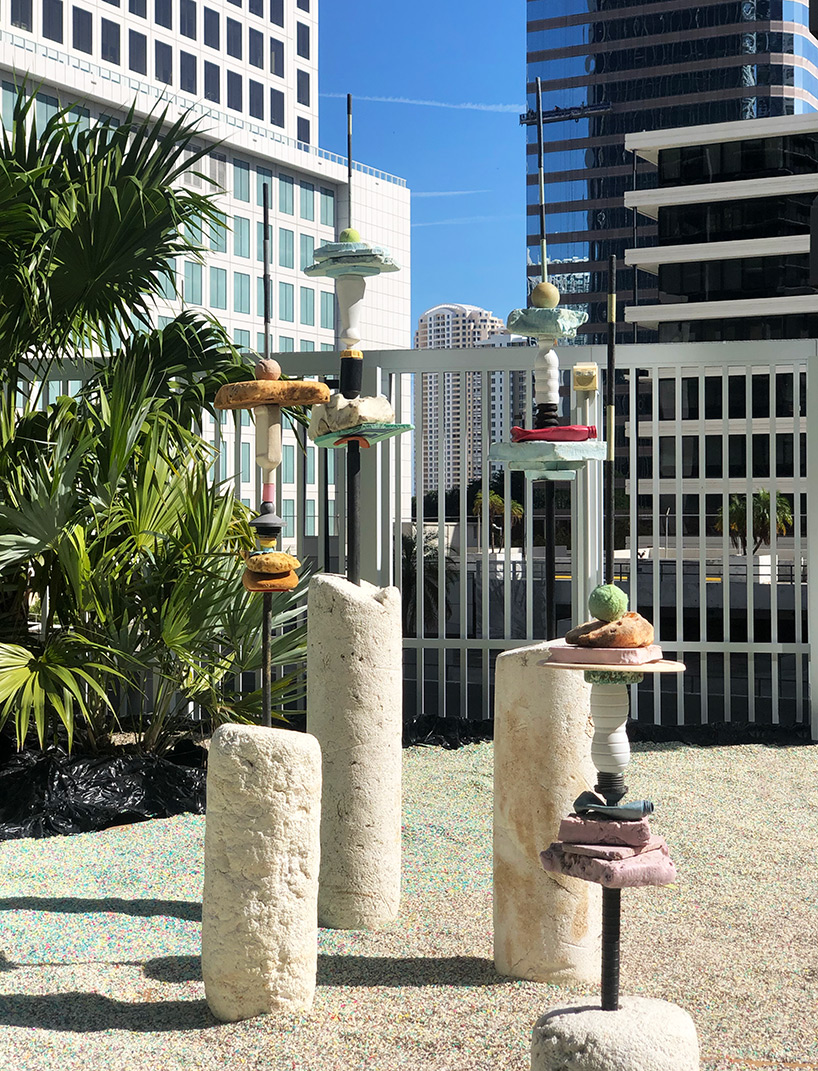 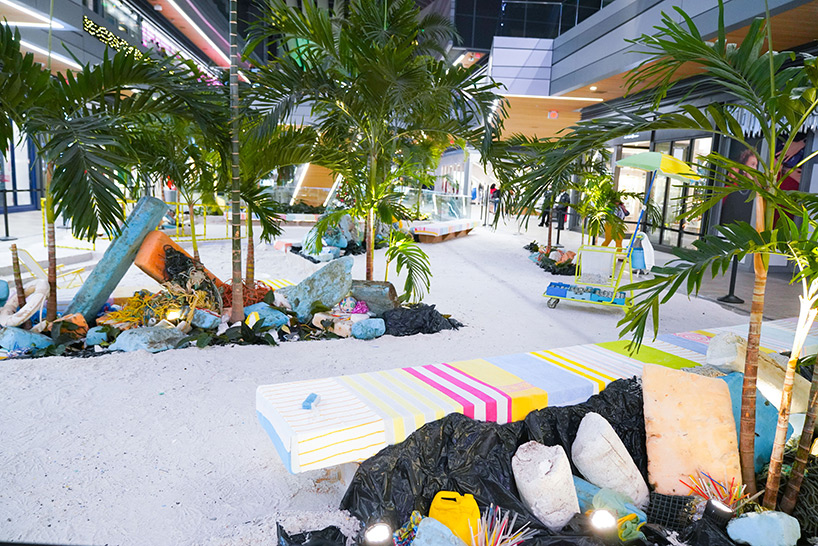 ‘legacy oasis’ is contaminated with a collection of microplastics, marine debris and beach toys 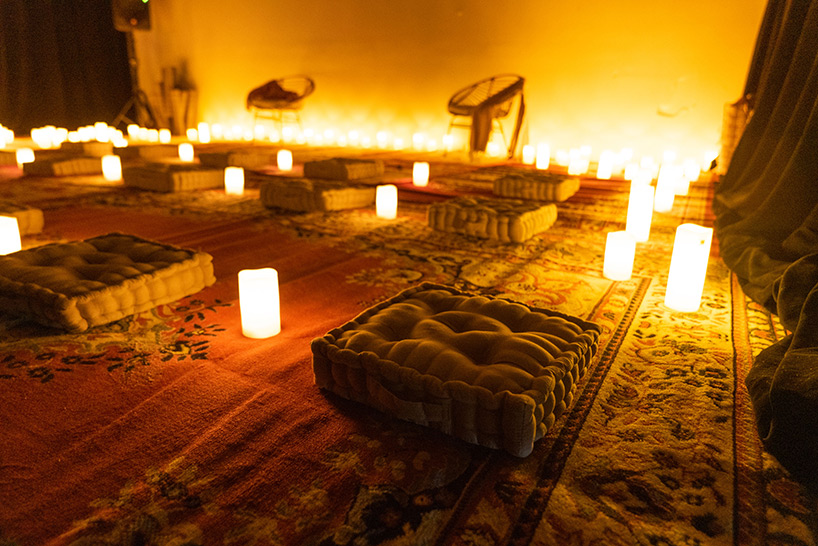