the historic, valley town of bruneck in the bolzano province of northern italy hosts an artistic and scientific intervention dedicated to the relationship between spaces, bodies and objects. architect stefan hitthaler, in collaboration with ulrich leitner of the university of innsbruck, has realized ‘corpus intra muros’ around a 16th century landmark known as ‘the gunpowder tower’ in the heart of the town. the tower’s mysterious and vague historical background sets the stage for a creative exploration into the relationship between human beings and the ancient architectural monument. 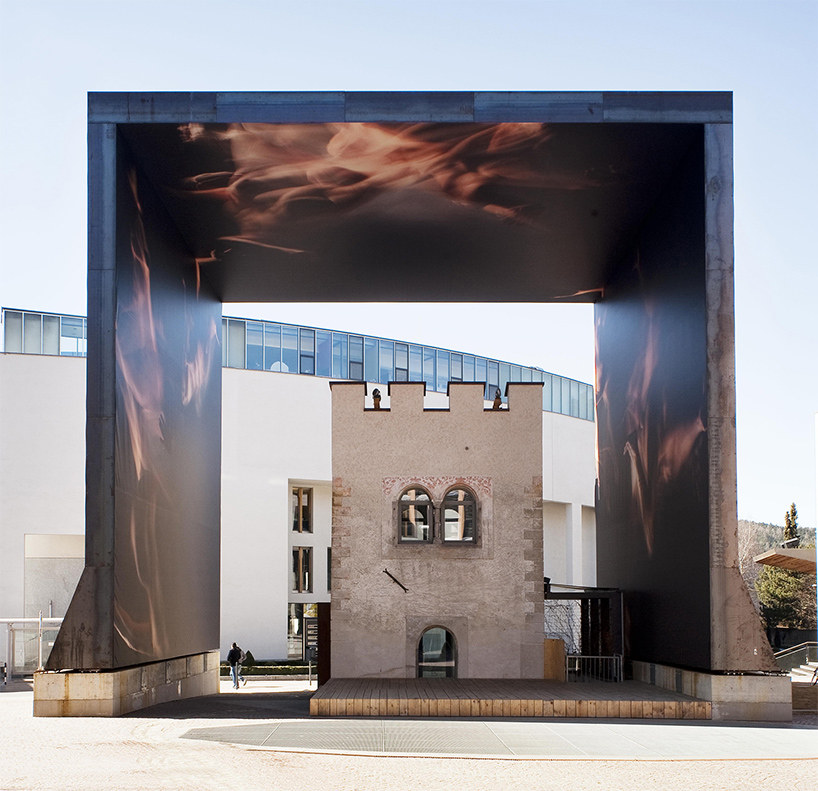 hitthaler has conceived a monumental, external shelter that ‘houses’ the historic structure beneath by an illustrative portrayal of ‘bodies inside walls’. the monolithic canopy rising high above the tower walls features an exoskeleton defined by a rusted metal material, while its interior is canvassed by a dynamic painterly composition. a large-format, photographic representation shows robed human bodies appearing to push through a dark, continuous background, forming a narrative between the tower and the installation that surrounds it. 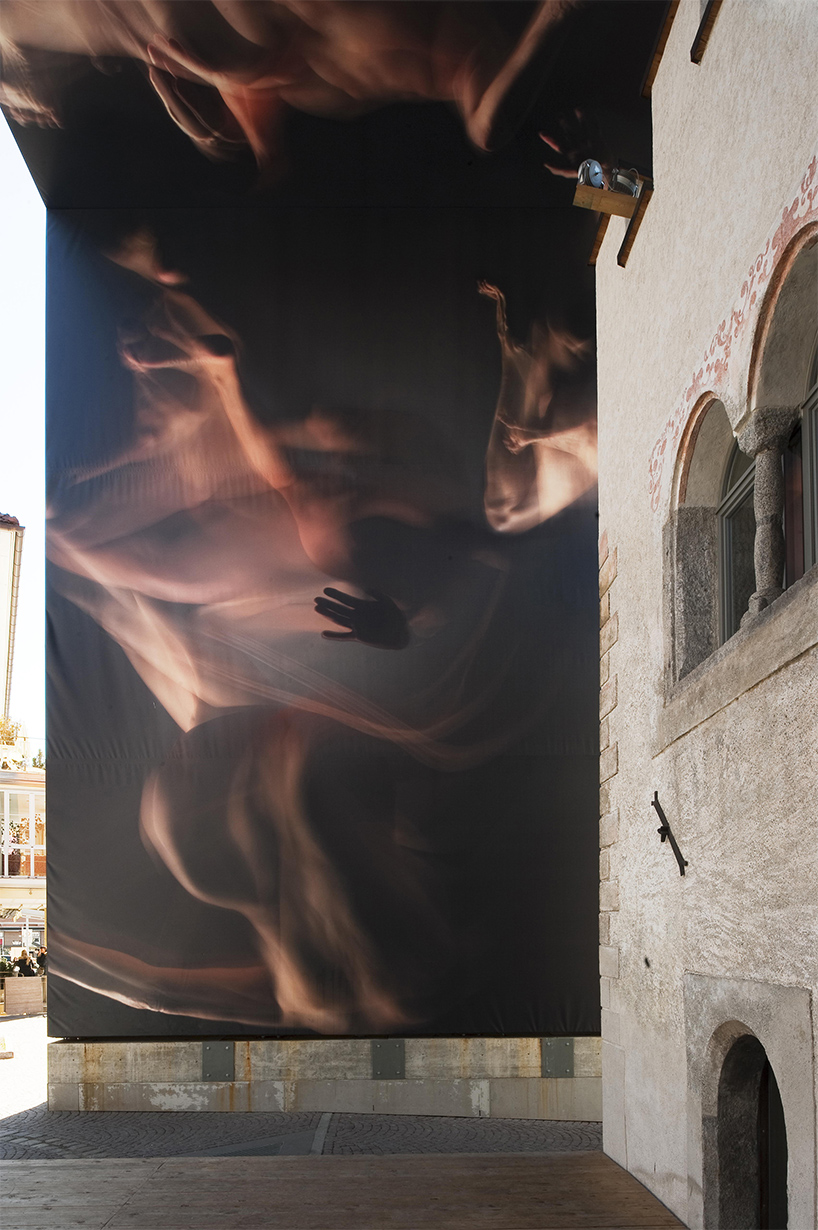 ‘spaces and objects contain within them the presence of human beings. human bodies imprint themselves on the very walls between which they live and along which they walk’, hitthaler says. ‘landscape can thus be read as a topography of invisible layers left behind by humans. so what would happen if we were to inquire after those human traces spaces and objects leave in human beings? the walls would influence the human bodies that had once created them, and the objects form the people who used them.’ 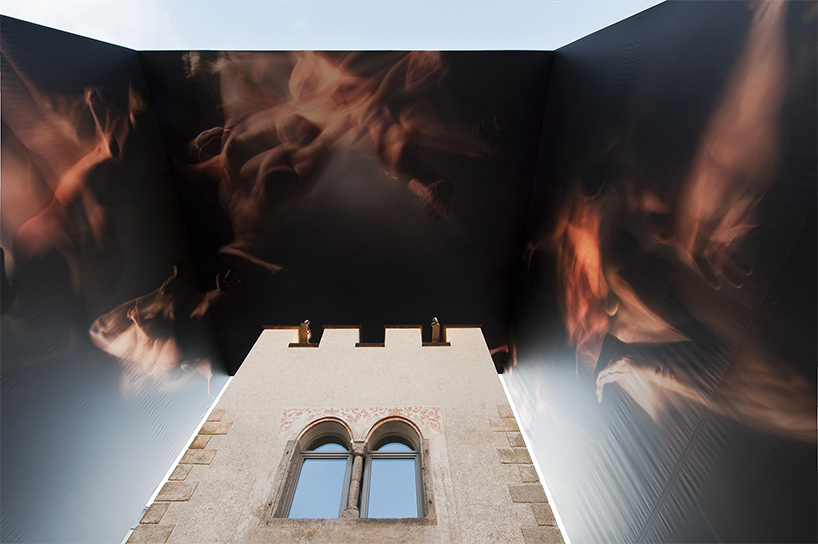 looking up, a dynamic photographic composition canvasses the interior of the installation 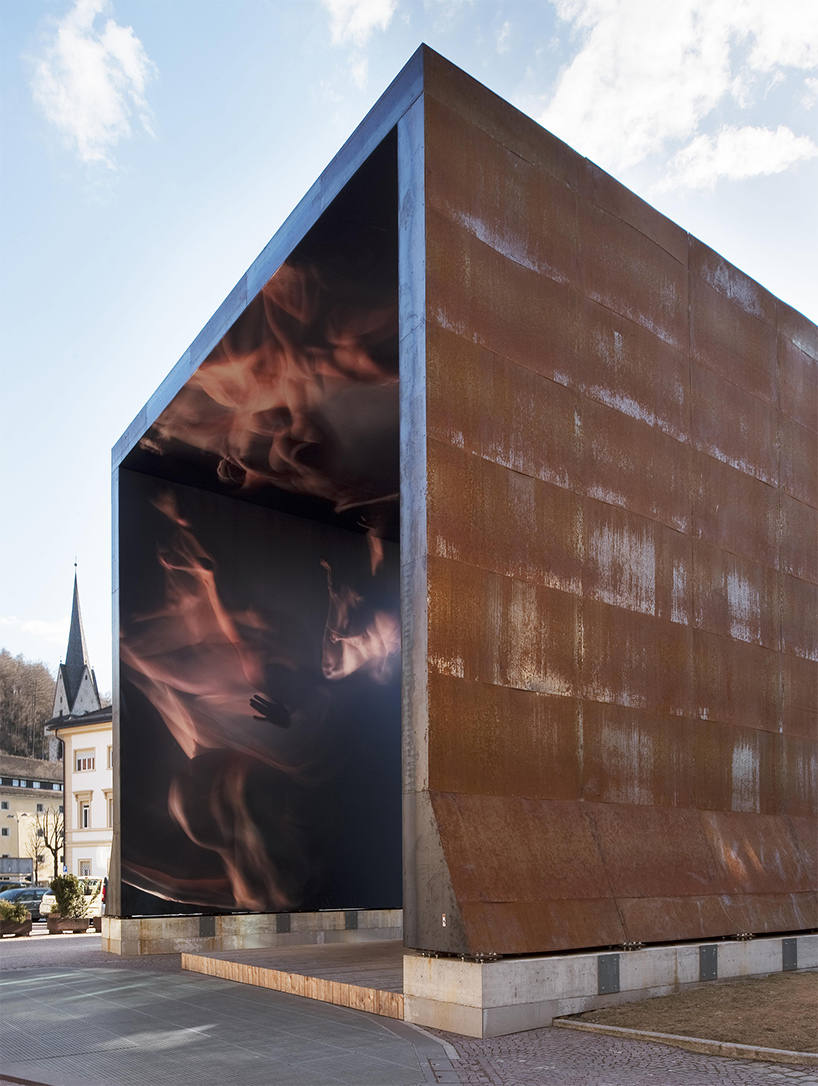 the juxtaposition of materials highlights the relationship between spaces, bodies and objects 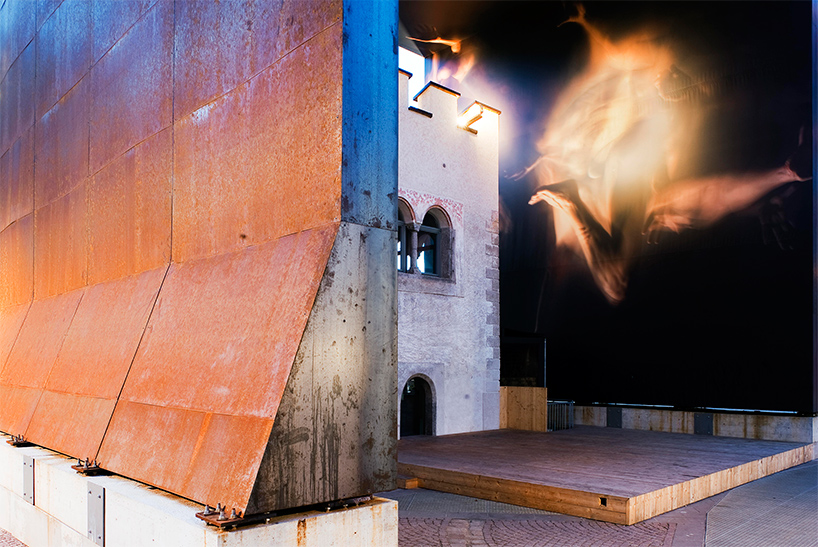 the dark internal panels are illuminated from within 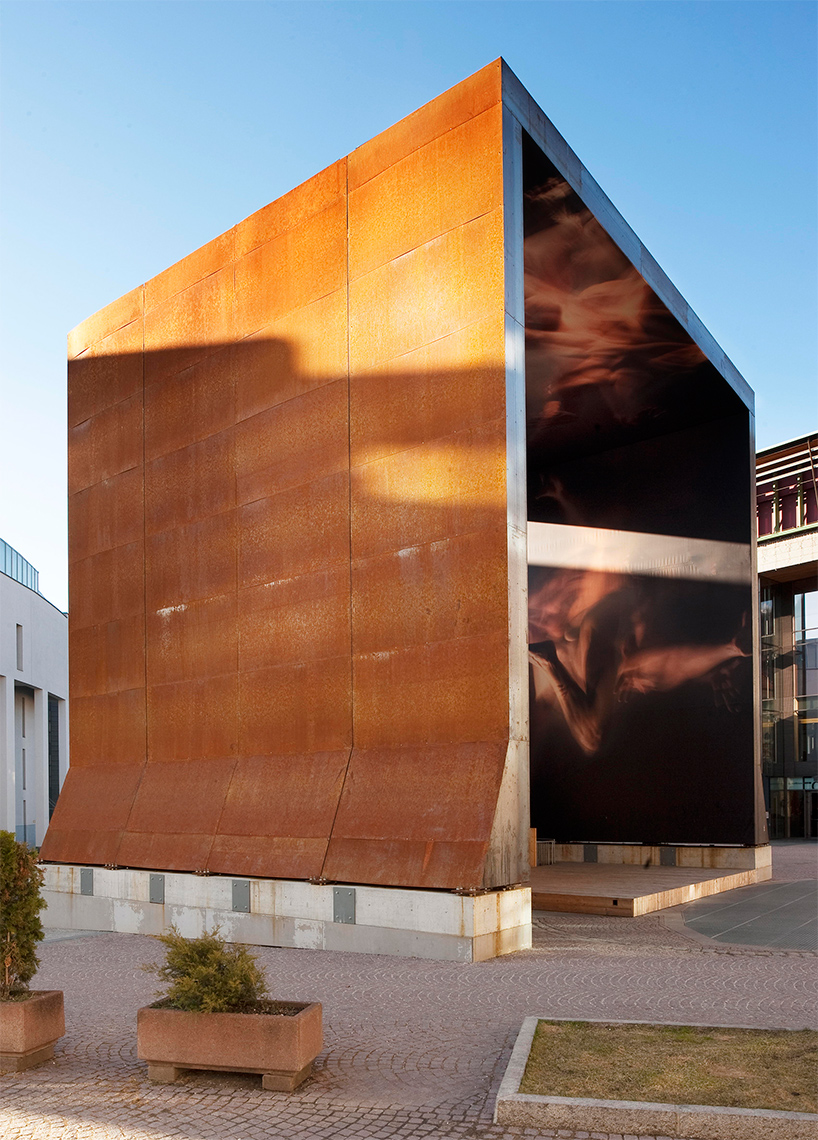 a rusted metal façade surrounds the exterior of the artistic intervention 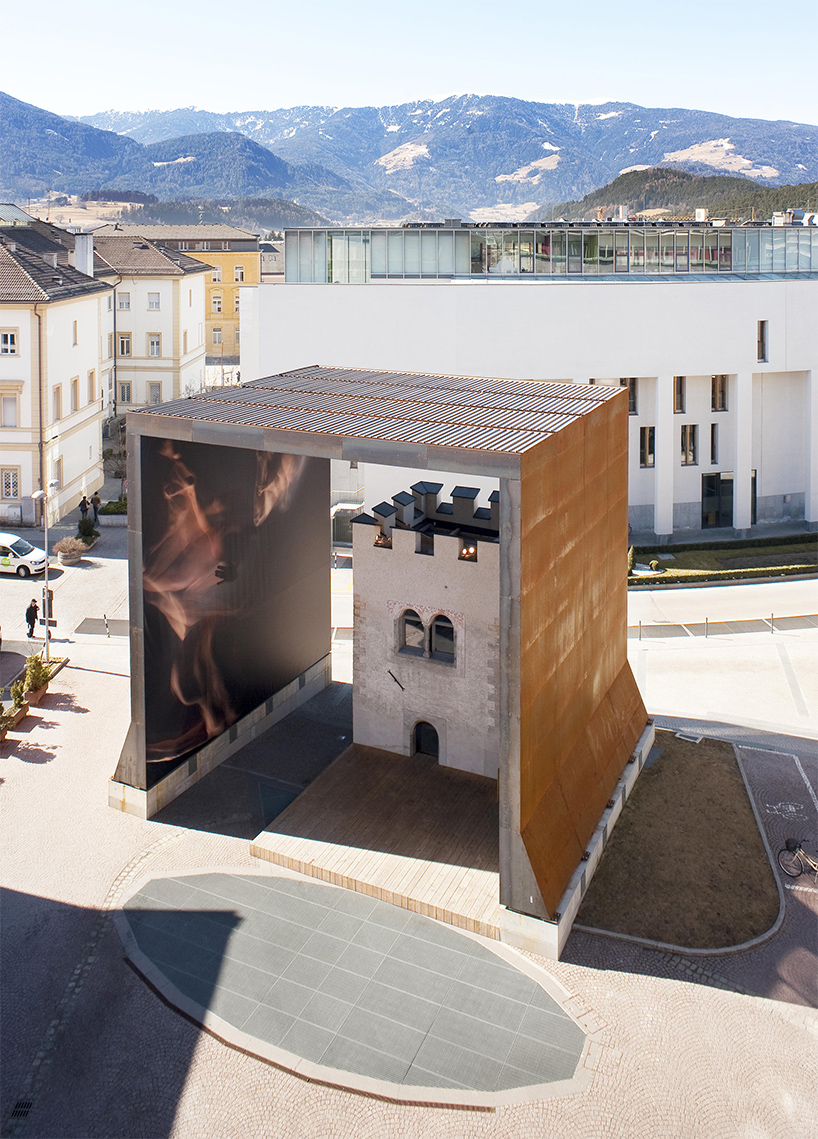 ‘corpus intra muros’ is set in the historic, valley town of bruneck in the bolzano province of northern italy 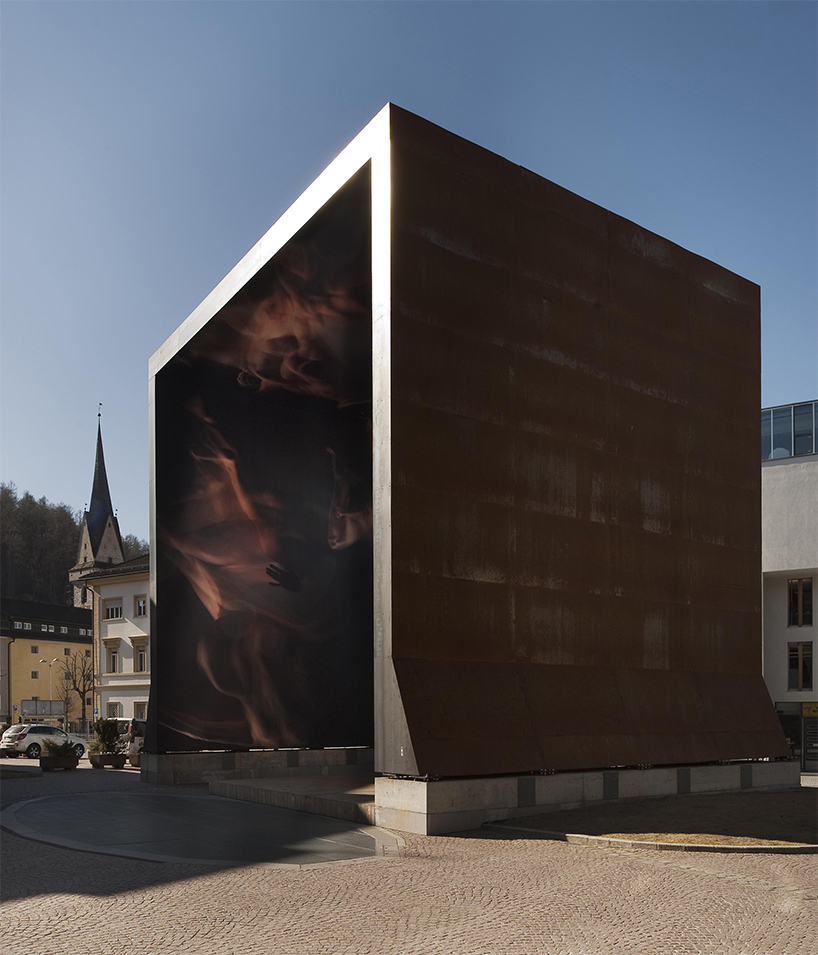 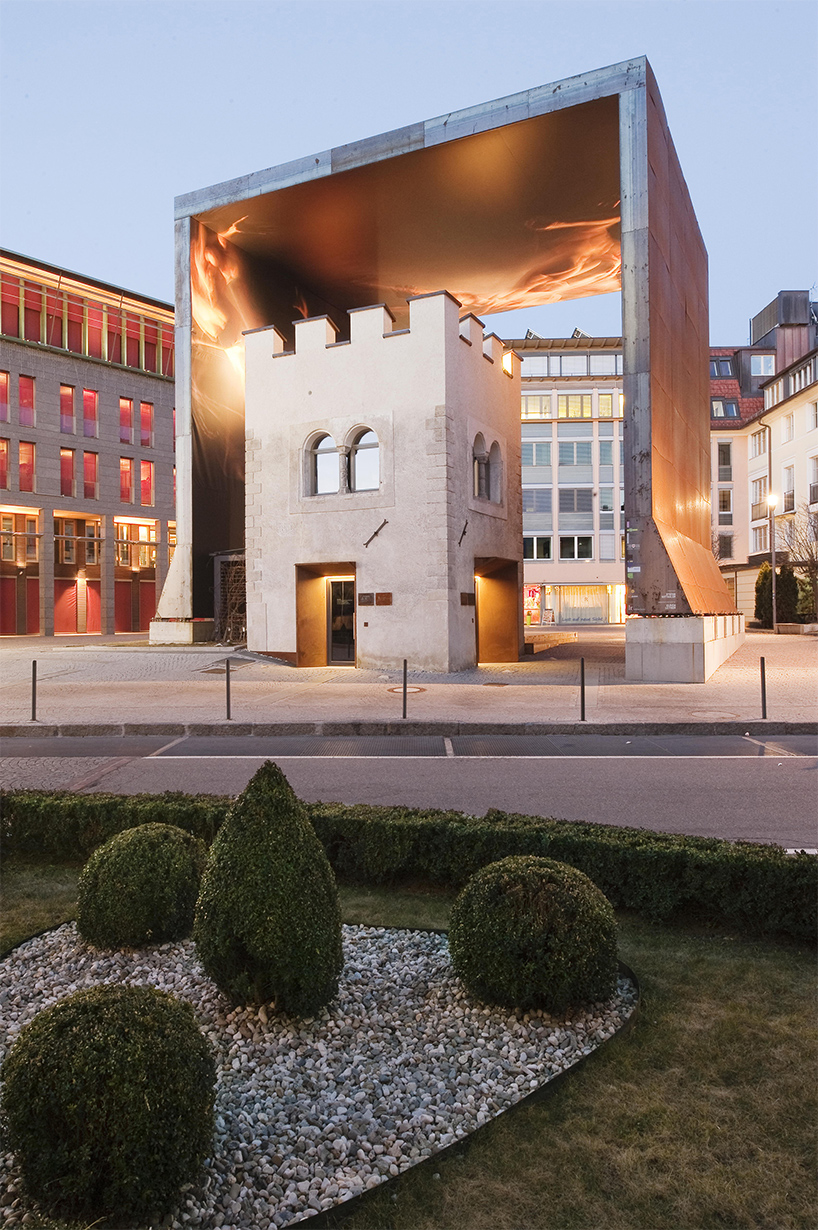 the historic tower meets the artistic intervention that surrounds it

a photographic representation is layered onto the interior of the installation

‘the gunpowder tower’ is housed by 'corpus intra muros'

Sep 25, 2020
enzo mari: falce e martello (sickle and hammer) at galleria milano
the abyss that separates the perception of the symbol of the sickle and hammer from the 1970s through the vision of enzo mari.
art
150 shares
connections: 12

Sep 16, 2020
roberto graziano moro documents the COVID-19 crisis in venice, italy, in its most critical moments
the photographer had been engaged in the documentation of the music industry and youth culture, but the pandemic changed the focus of his lens.
art
769 shares
connections: +450