a one-metre high sculpture of a crucified frog, holding a mug of beer and an egg, on show at a modern art museum in italy has stirred controversy in the staunchly roman catholic country. the frog, with its tongue hanging out is wearing a green loin cloth and is nailed through the hands and feet on a brown cross in the manner of jesus christ and could be perceived as a provocation by the people of the alto adige region, which is 99% catholic. the board of the ‘museion’ museum in the city of bolzano was meeting today to decide whether to comply with the wishes of the pope, who is currently on holiday in the bolzano region.

curators at bolzano museum of modern art ‘museion’ said that kippenberger’s work was a self-portrait of the artist ‘in a state of profound crisis’, but their explanation has been given short shrift by local bishop wilhelm egger. ‘the crucified frog has shocked many visitors to the ‘museion’ and has hurt their religious feelings,’ egger said. the debate about this controversial artwork started when an italian official started a hunger strike. 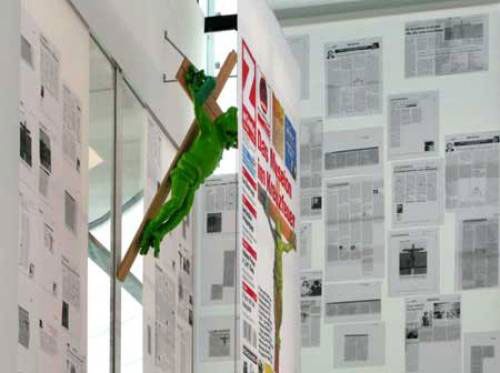 kippenberg, who died in 1997 aged 44, was a painter, sculptor and photographer. several exhibitions of his work have been held posthumously including a show at london’s tate modern in 2006.