culture gate to japan will be available online indefinitely

through an exhibition of digital artworks that fuse technology and japanese tradition, the second edition of CULTURE GATE to JAPAN awaits domestic and international culture seekers (see the first edition here). the installations, designed by a curation of japanese creatives, are now on show at tokyo’s haneda airport and the city’s international cruise terminal to welcome in-person as well as online arrivals. each creation hopes to inspire and inform visitors to delve further into the history and traditions of the country.

CULTURE GATE to JAPAN is now live – step onboard and check in! 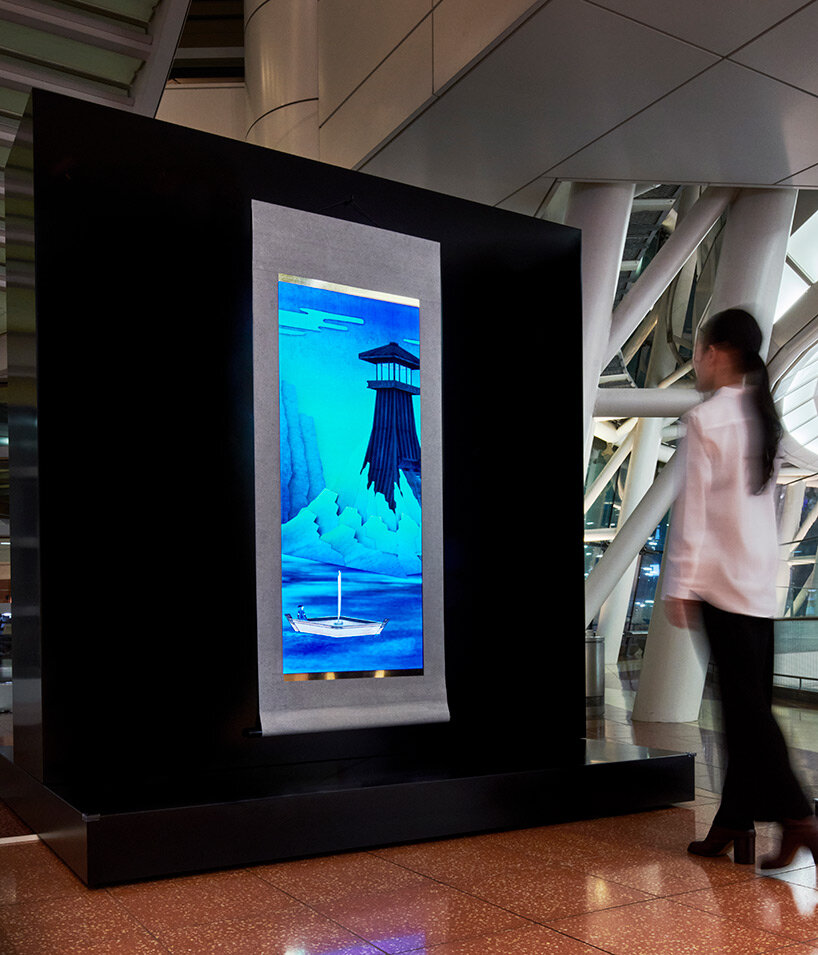 (banner) ‘the sigh of eels’ by dorita takido

all images courtesy of CULTURE GATE to JAPAN

the artists’ installations are shown across three different exhibits – neo-kakejiku, transcending prayers, and +A+ – that stimulate history through innovative, contemporary artworks. neo-kakejiku, features five artists re-interpreting the traditional hanging scroll, and transcending prayers, created by sayaka shimada reminiscing the country’s cancelled firework festivals due to the coronavirus pandemic, are exhibited in tokyo’s haneda airport. simultaneously, +A+, at tokyo’s international cruise terminal, sees four artists explore the relationship of the human spirit and the sea via a large-scale video installation. 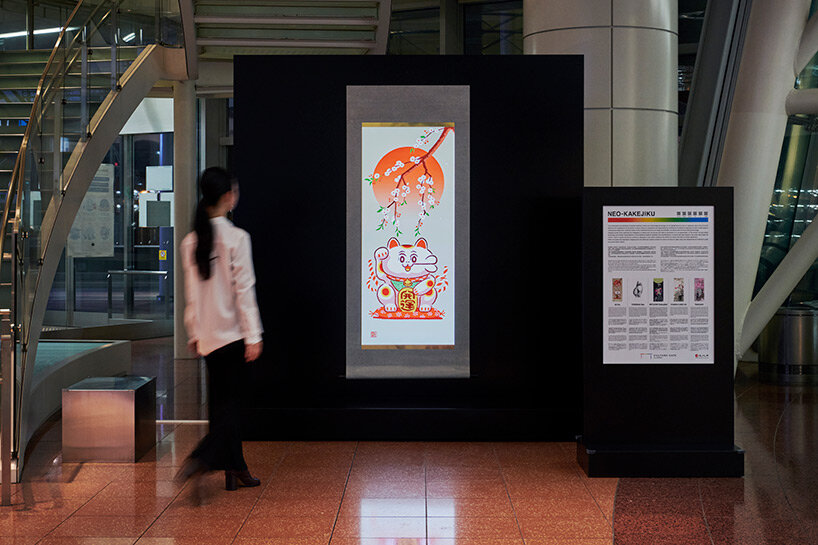 neo-kakejiku (video here) uses the latest technology and modern interpretations to give a new look to japan’s classic hanging scrolls. first introduced by buddhist missionaries from china and typically displayed in tokonoma alcoves, these are found in tea ceremony rooms, ryokan inn guest rooms, martial arts dojos, and the most important room of the house. the brief to the participating artists was to express the charms of japanese culture from a new perspective as to welcome anyone who visits the airport.

artist AC-bu animates its popular iruka-kun dolphin character also featured in fashion collaborations, music videos, LINE stickers, and art exhibitions. in this artwork the character embodies the good fortune charm, maneki-neko. dyebirth_seeing as by Creative Label nor projects moving ink that resembles tree branches and flowers, rocks and clouds, and mountains and rivers. the unpredictable chemical reactions create patterns that blend together and eventually turn to black, reminding onlookers of the diversity and cycle of life. 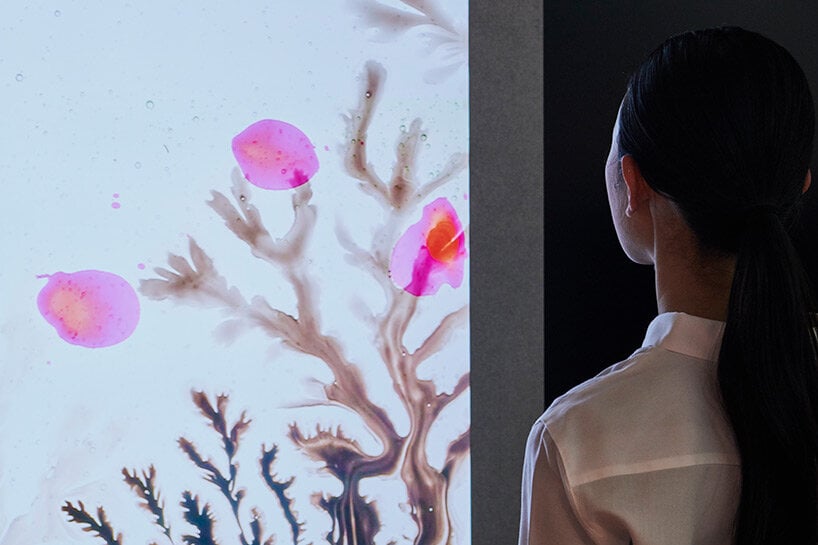 into the bamboo by natsujikei miyazaki is a modern take on ancient japanese folk story, ‘the tale of the bamboo cutter’, in which a mysterious princess comes from the moon and is discovered as a baby inside the bamboo’s stalk. through a floating girl, the artist sees the inspiration as a reflection of the daily life we now live, with our private expressions hidden behind masks.

nyamyam‘s tengami presents a digital representation of the video game in which the player becomes a samurai who must explore a mystical pop-up book world. while what is in the sea is also in me by nao yoshigai depicts a nighttime swim in the sea inspired by the artist’s perspective on sugita genpaku’s anatomical tables. genpaku was author of the ‘kaitai shinsho’ design book which was written in the edo period (1603-1868) and was the first full-scale translation of a text on western anatomy in japan.‘I dived into the sea at night and felt that what is in the body is also in the sea. in the ocean, life and death are mixed together […] I hope to touch the universe of the body that has yet to be revealed,’ says yoshigai. 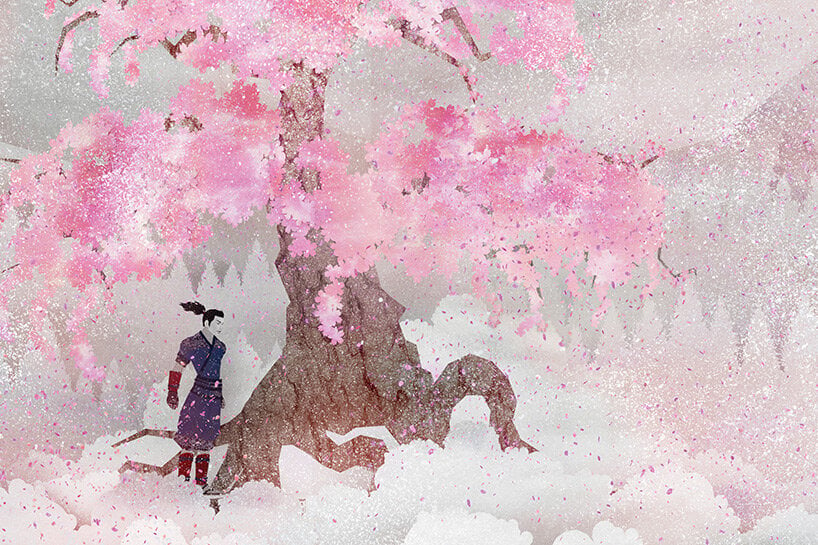 nyamyam’s contribution to neo-kakejiku is based on their ‘tengami’ video game, which places you in the role of a samurai who must explore a mystical world created with washi paper

in japan, appreciating the fleeting beauty of fireworks is the summer equivalent of viewing cherry blossoms in spring. for transcending prayers at tokyo’s haneda airport, artist, pyrotechnician, and fireworks show designer sayaka shimada explores history, thought, and aesthetics behind her installation titled fireworks for another world that never came. to this day, japanese firework displays are symbols of hope, impermanence of life, and fleeting beauty as well as a requiem for departed souls. shimada gathered information on the dates and places where around 1,300 fireworks festivals were cancelled in 2020 due to the influence of coronavirus. based on this data, she created a specially designed fireworks show; launched them and captured it all through a one-shot aerial filmed footage. this was then presented by simulating the bursting explosions across a national map, dotted with tools from the launch, as the artwork tributes the aborted events .

‘fireworks for another world that never came’ by sayaka shimada

taking over the tokyo international cruise terminal, +A+ (plus A plus) is an exhibit that uses sound and images to appreciate the imaginary code that connects to the city’s port. ‘A’ represents the process of cultural and artistic activities in which ‘A’rtists express and ‘A’rchive the interaction between port’s existence that encompasses encounters and traditions, and the sea that ‘A’dapts to the contexts of local culture. the four artists go for an introspective view and capture this relationship of the human spirit and the sea as a self-centered world.

‘while looking out on the sea from tokyo international cruise terminal, in the drifting of the waves that move closer and farther away without ever ceasing, as creators we feel ‘time’ measured by a different scale than the hours of human society and imagine new interactions of the spirit with ourselves and others,’ explains curator junichi takekawa. 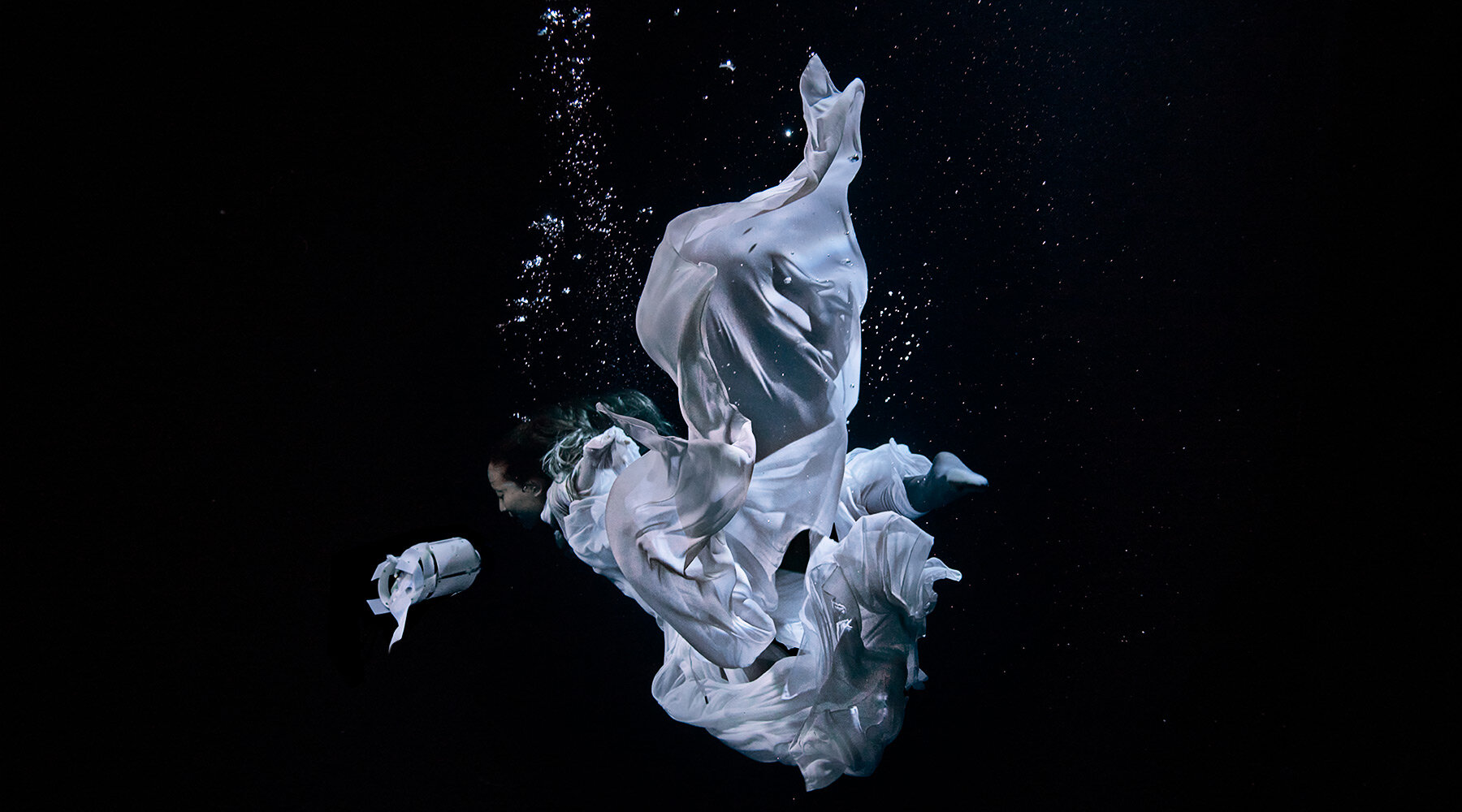 capture from +A+, ‘the sigh of eels’ by dorita takido, image by sho tanitsu

using bird’s-eye view, visual artist hiroaki oishi collaborates with musician minori nagashima to express the magnificent invisible sea landscape of the country through the artwork sealed aspect. the underwater world is dynamically envisioned with sound and video based on digital data gathered from surveying the topography of the seafloor.

the second artist in the series is based on enoshima engi, the origin myth of japan’s historic kamakura capital. the video reveals a five-headed dragon that fell in love with the goddess of music and entertainment. after refusing the dragon’s request to become his consort, the ashamed creature turns into a hill. hope by artist saeko ehara upholds the positive tale, still today strongly associated with enoshima.

the third piece touches on the extinction of eels, a result of overfishing portrayed by dorita takido‘s digital piece. with recent underwater footage of tokyo bay, a robot that produces eel larva is released in the sea to ensure that balance in the ecosystem diversity is maintained. with the sigh of eels, the artist aims to teach how technology and human hope can save the environment.

capture from +A+ ‘sealed aspect’ by hiroaki oishi + minori nagashima 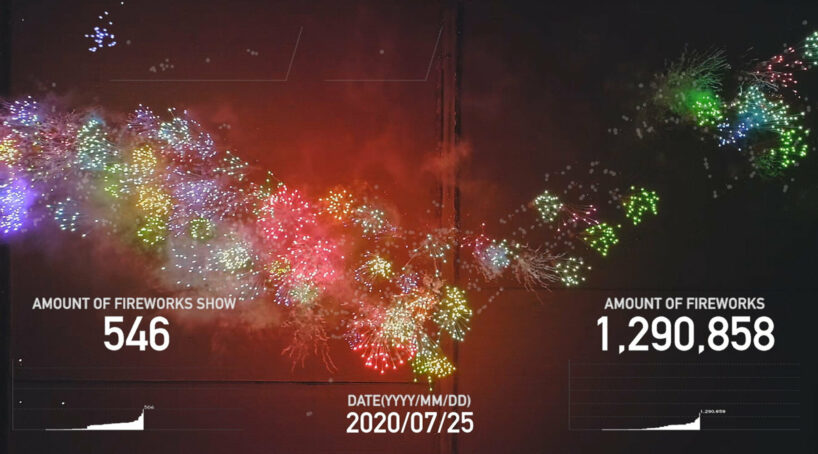 for transcending prayers at tokyo’s haneda airport, the artist gathered information on the dates and places where around 1,300 fireworks festivals were cancelled due to the pandemic

‘into the bamboo’ by natsujikei miyazaki is a modern interpretation of an ancient japanese folk story, ‘the tale of the bamboo cutter’, and one of the artworks exhibited in neo-kakejiku