brooklyn, new york artist meg hitchcock weaves together spiritual traditions by cutting away from religious texts letter by letter, then placing these characters by hand in a swirling combination of characters creating the words of other holy books. hitchcock was raised as a fundamentalist christian and now does not identify with religious learnings. through her work, the artist celebrates all religions and the human need for transcendence– to reach outside of oneself for a connectedness with ‘the other’. through her works hitchcock feels she honors this timeless urge in humanity by uniting various faith systems through art, raising both religions by making art from their only actualized form. the artist says of her work, ‘I incorporate and ‘cross-pollinate’ the sacred writings of all spiritual traditions, suggesting that all religions derive from the same source, and are sustained in the same unwavering faith.‘ 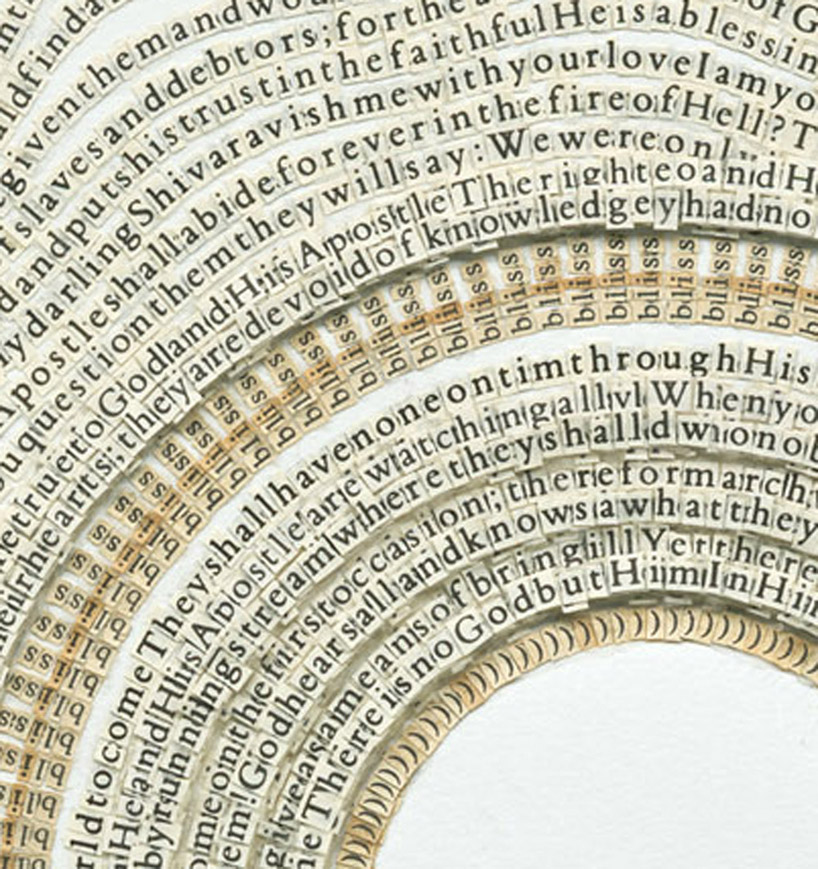 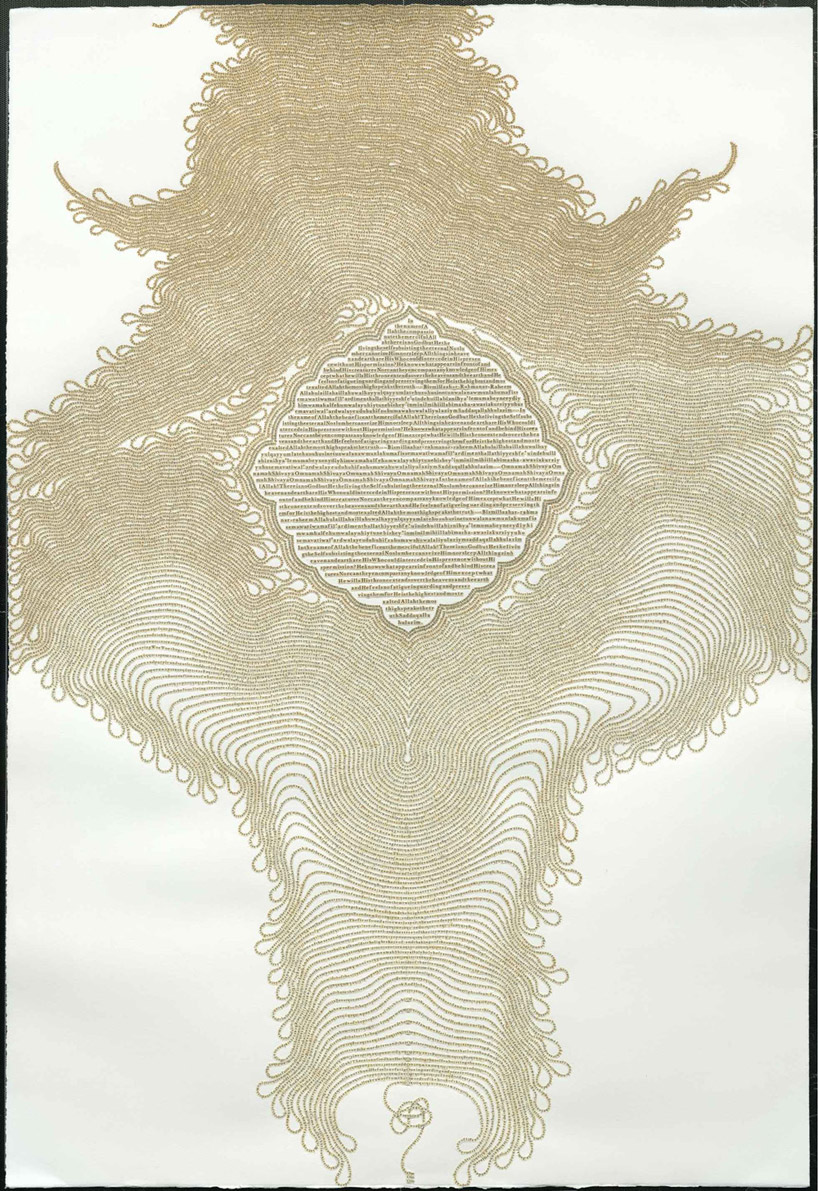 ‘in ‘throne: the book of revelation from the koran’, the letters were cut from the koran and used to create the book of revelation. this book makes many references to the throne of god, and a popular muslim prayer is ‘ayat al-kursi’, or ‘the throne verse’, which refers to the throne of allah. I included this prayer as the centerpiece in the form of an islamic mandala, in both the english translation and the arabic transliteration. the letters for this prayer were cut from a bible. outlining the mandala is the sanskrit mantra ‘om mani padme hum’, the mantra chanted by tibetan buddhists to invoke the blessings of chenrezig, the embodiment of compassion. seeing the mantra in print has the same effect as writing it, thus my inclusion of this mantra in ‘throne’. I also included personal prayers and meditations within the text‘. -hitchcock speaks to ‘throne’ 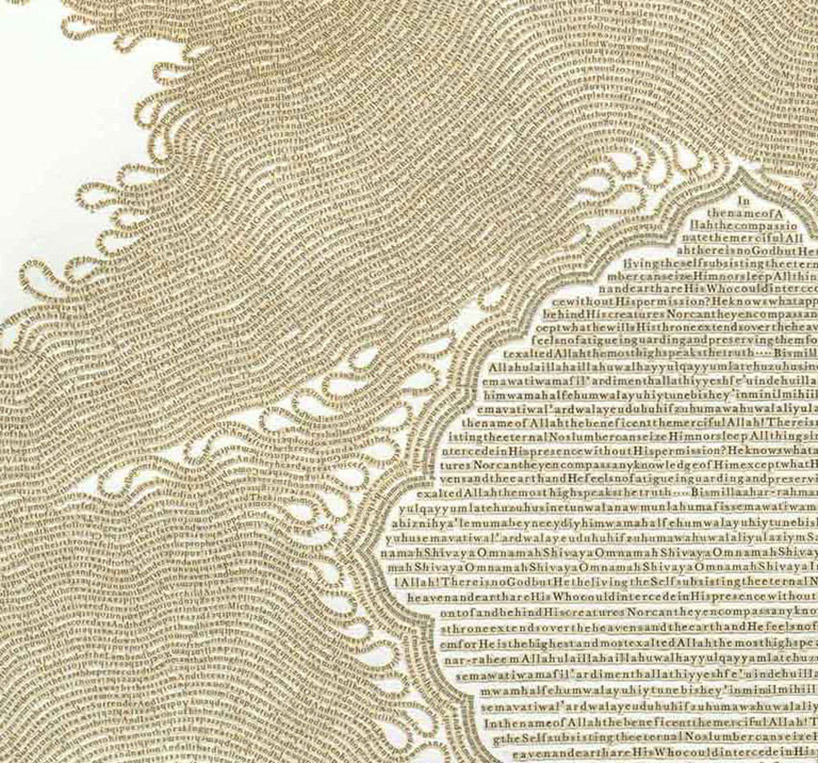 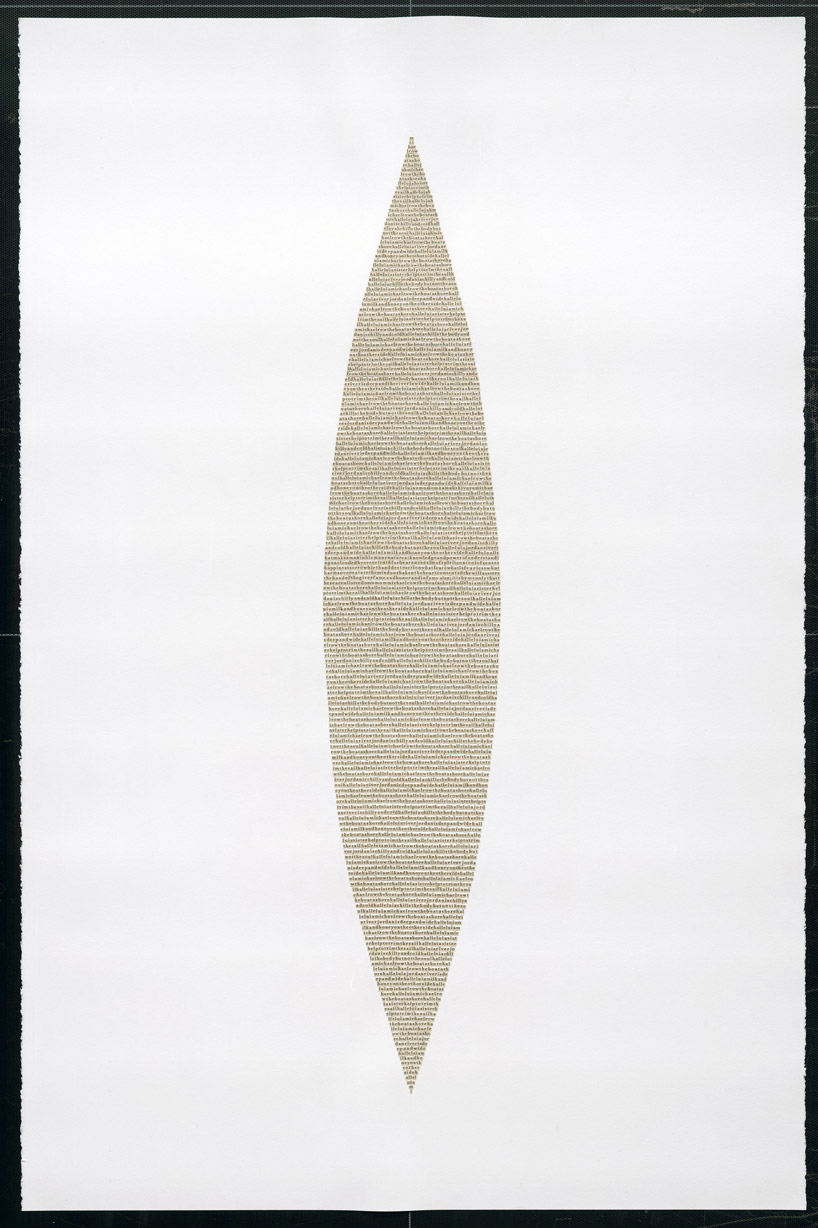 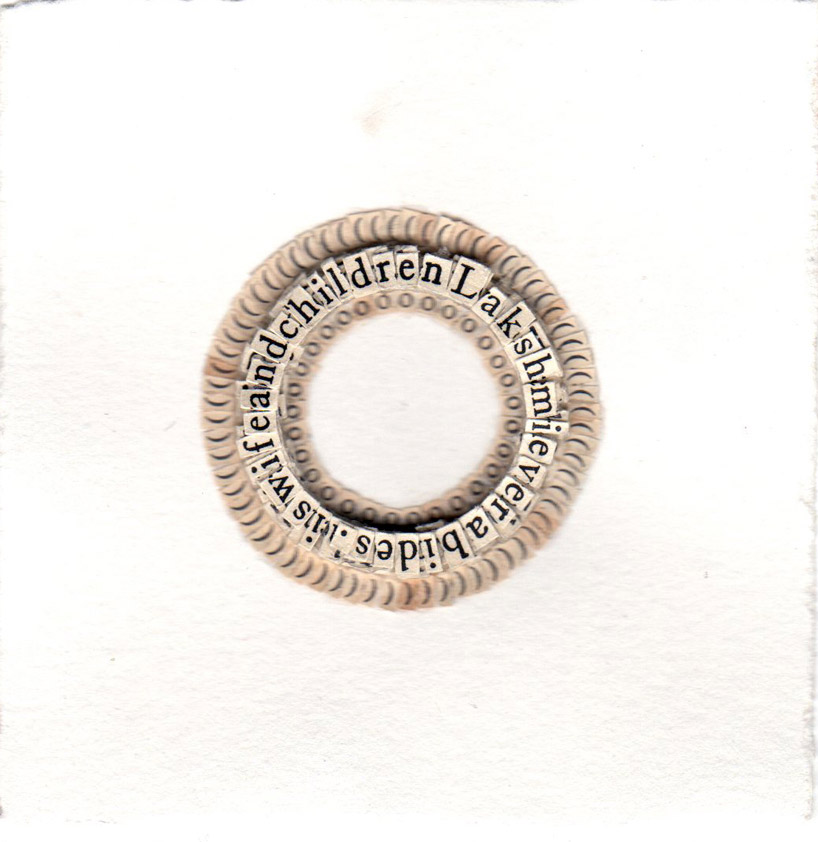 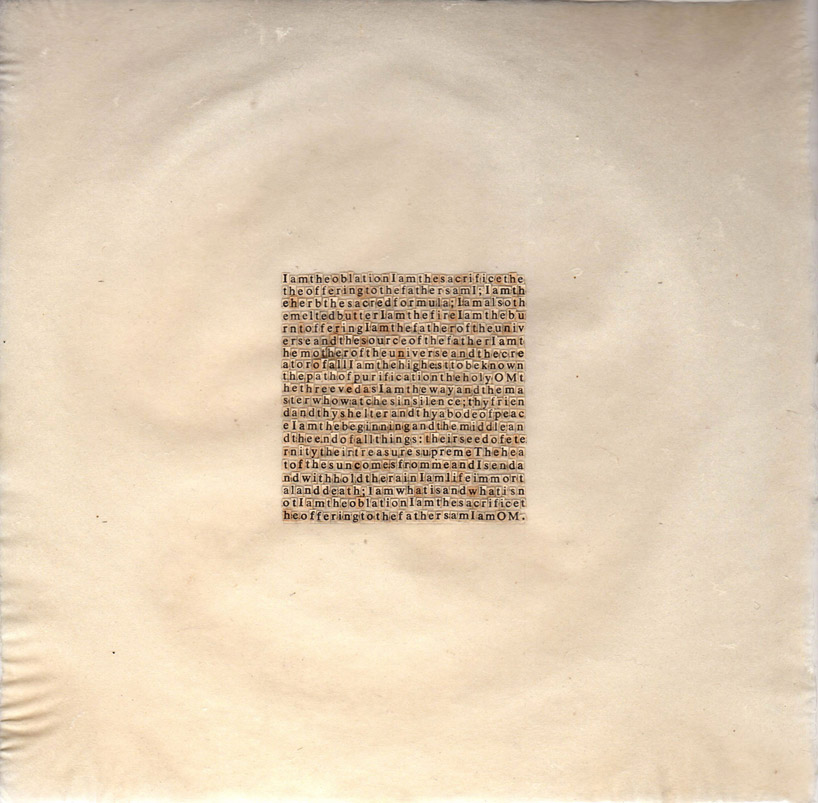 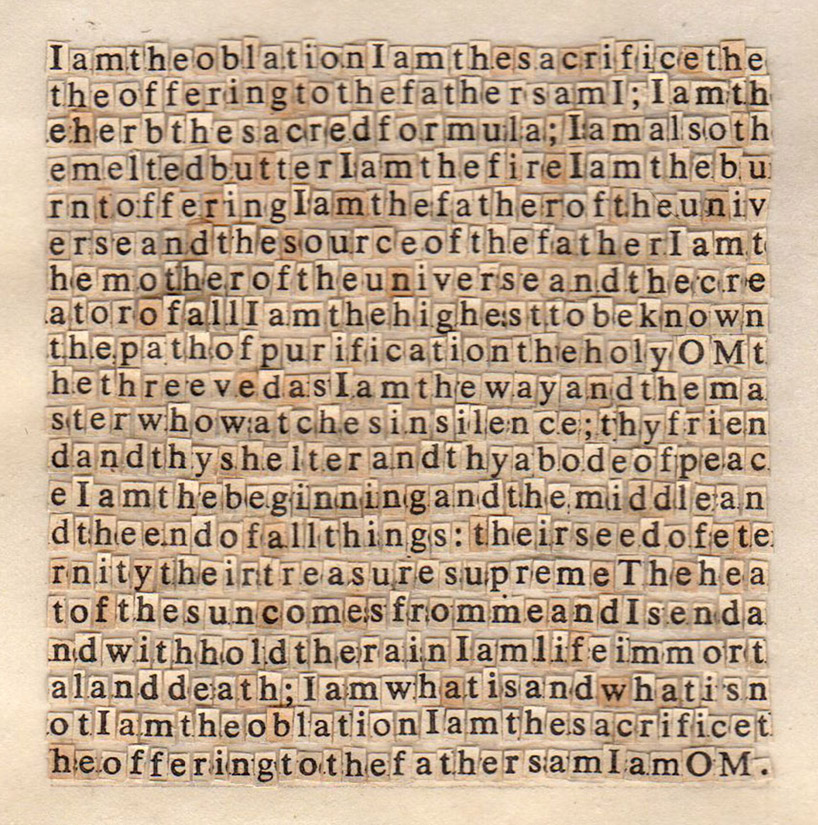 ‘I am the oblation: bhagavad gita, ch. 9’ detailed perspective 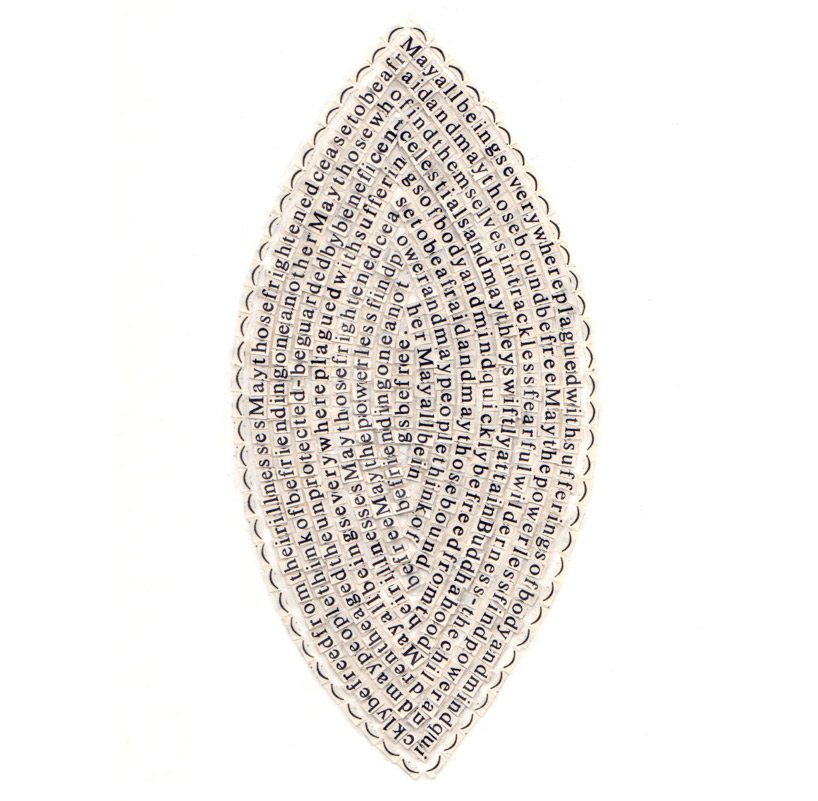 ‘buddhist prayer for peace’, 2012 letters cut from the methodist hymnal 7 x 5 in.