for the project ‘we come in peace’, california-based artist daino enters into a temporary zone of proximity with a colony of ants living in the dirt just outside his riverside home. rather than displace them into his studio space, he comes to them, into the environment that they have built for themselves. as opposed to being there to aggressively wipe them out, he is there to observe them at a distance, participate with them, and join their network. their underground city might be limited, but it constitutes a world and, by entering it, he becomes a part of it.

the artist’s scrutiny and their engagement together represent an assemblage, as deleuze and guattari would call it, of ‘becoming-insect.’ from the concept, photographs and videos that he produces serve as documentation for the ongoing performative work, which functions as part hermeneutic research and part heuristic intervention. by learning the daily routines of the ants, through repeated exposure to their activities, particularly their collective investment in aggregating bodily fragments of dead bees (and the honey that they carry), daino is able to entice the ants to individually and collectively carry small replicas of protest signs scrawled with anti-authoritarian messages. 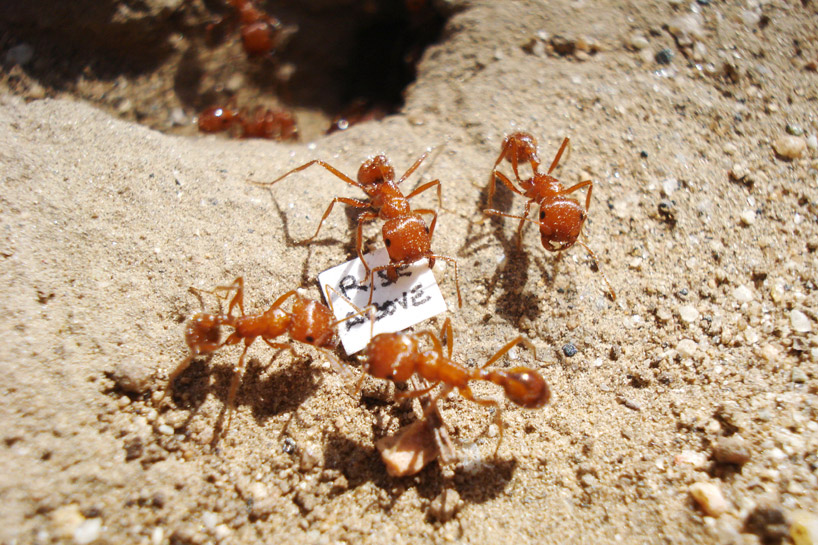 this tongue-in-cheek effort to reference swarming’s impact on contemporary strategies of dissent also highlights the failure of any reversal of that same influence.in other words, however altruistic his intent, the artist cannot teach the ants to reject their insect motivations. the irony inherent in the project is that by voluntarily picking up the signs that revolt against inhumane treatment, celebrate transcendental love, or express solidarity with an anti-corporate agenda, the ants are always continuing uninterrupted and unmoved in their daily labors. 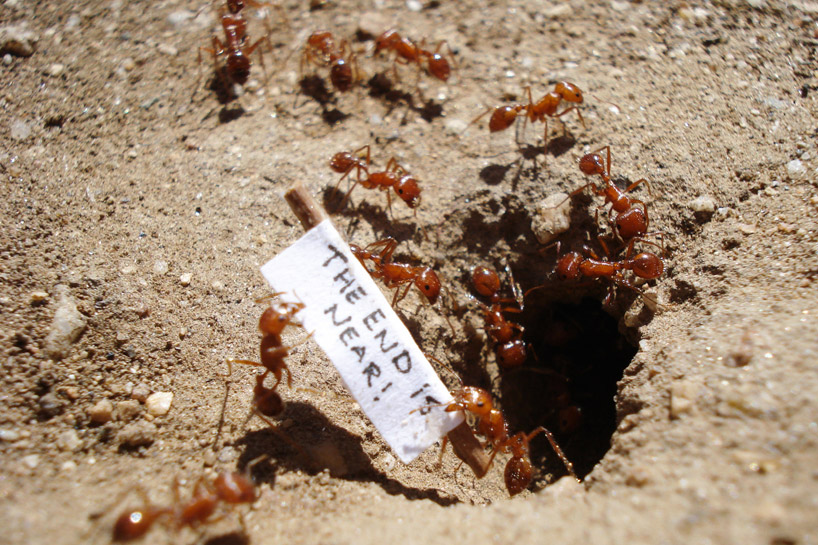 the end is near!

their methods for carrying the signs, in their mandibles and usually by the paper end rather than the stick, along with the way the inverted, cropped, or invisible lettering tends to obscure the actual message from our view, is the real manifestation of their rebellion. they reject daino’s efforts at humanizing them and refuse his authority, as evidenced by the stack of mini pieces of paper outside the entrance to their hidden lair. after taking the signs with them into the private and inaccessible space, they ultimately spit them out again as unwanted and unnecessary objects. 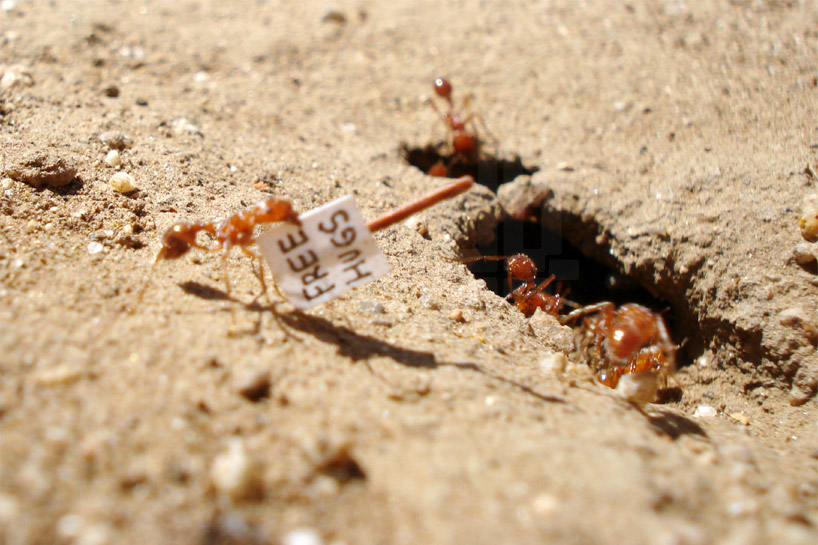 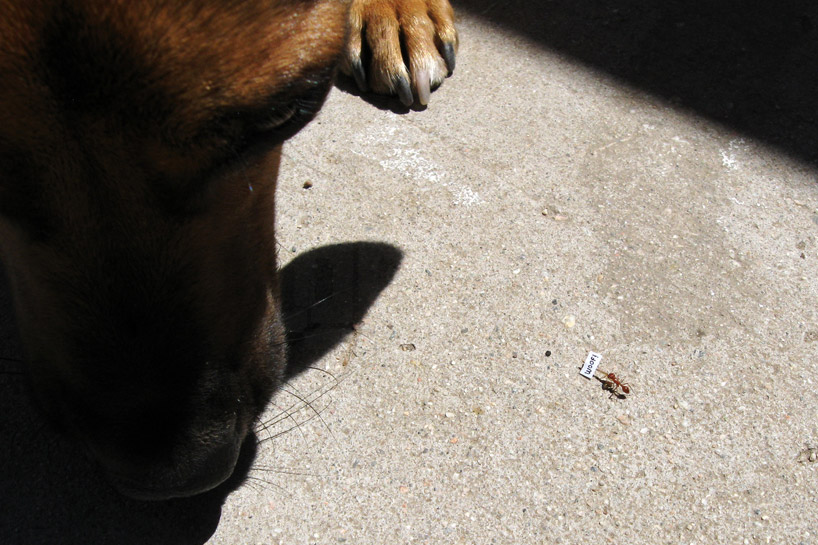 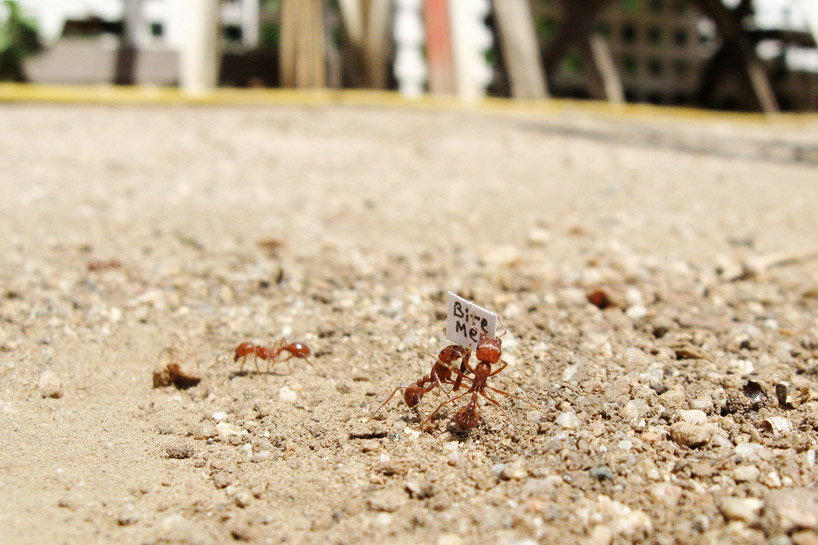 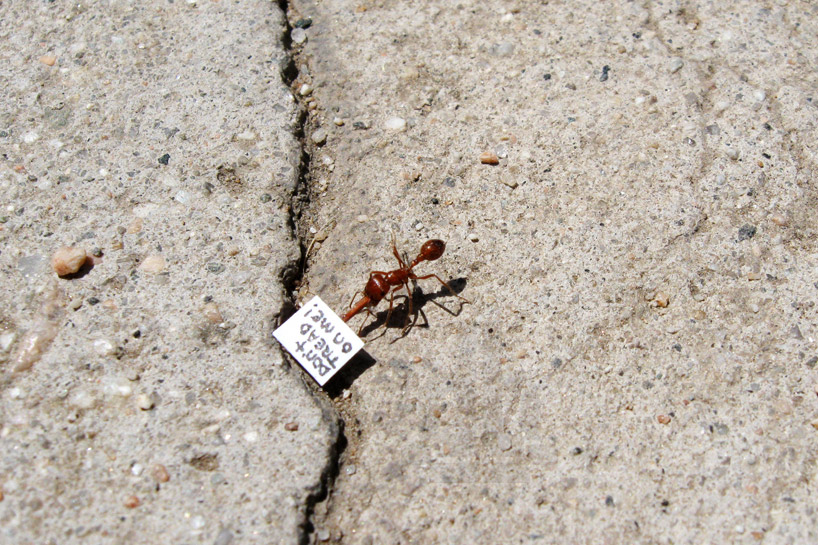 don’t tread on me!