parasol unit presents ‘the pure necessity,’ belgian artist david claerbout’s reimagining of the 1967 film ‘jungle book’. the near hour-long adaptation dispenses with the anthropomorphization of animals, copying the original’s settings and characters but in a version that’s more like a nature documentary than a disney film.

designboom had the opportunity to catch up with the artist after he introduced ‘the pure necessity’ at  engadin art talks (E.A.T.). the theme for the two day programme was ‘silent — listen’, exploring the many aspects and relationships of silence and listening and the communication of nature in its many facets, all themes that are central to claerbout’s practice. 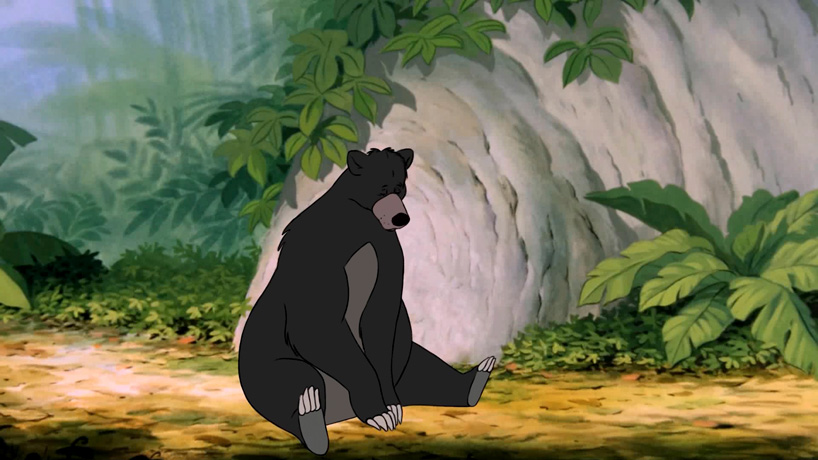 ‘in our lives we’re saying goodbye to a culture where you take vision for granted and it’s problematic because we cannot live a single day without this confidence system. it’s a process that lasted almost 200 years, from the development or invention of industrial printing to the photograph, and then the sequential moving image.’ claerbout says.

‘we’ve created a confidence system in which we make an analogy between the body of the camera – the lens – and our own eyes. we go with the flow and understand. we carry a little thing in our pockets, a phone with something which we still call a ‘lens’ and that, as we speak, is disintegrating and it’s interesting to see what it is being replaced by.’ 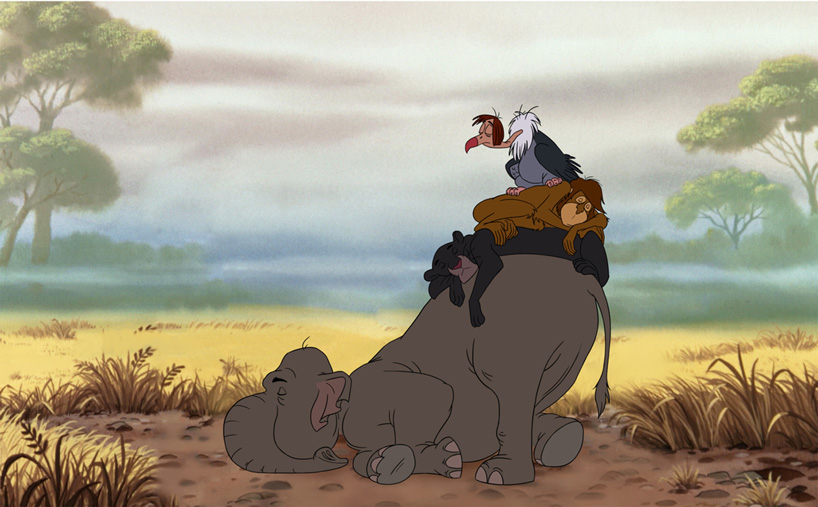 ‘we’re obviously going to get something which will photograph out of darkness. the future of ‘the camera image’ is obviously without the lens. it’s a paradox. dark optics!’, claerbout adds.

‘we live in a visual culture and in our relationship to technology we become technology. I ventured into aspects of perception and started to understand how we actually see. interestingly, we don’t really see with our eyes, we essentially use our brains. how does the brain synthesize perceptions, emotions from our sensory signals that knowledge is provided?

what we know is based on centuries of a constructivist process. we capitalize on a huge amount of stored knowledge and how our vision works is kind of similar to the digital camera (far more then to the analog camera). but the digital camera is obviously in a transition period. what we venture towards is something quite different.’ 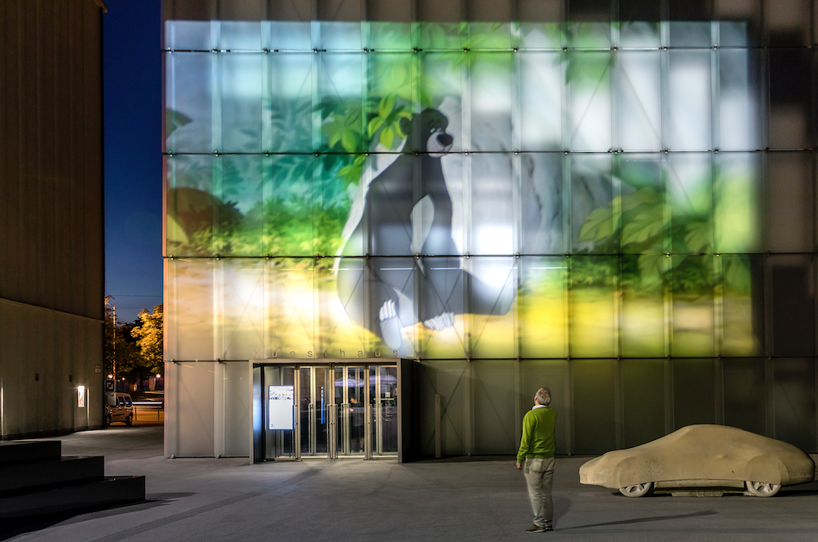 rather than repeating the story of a little boy abandoned in the middle of a jungle, ‘the pure necessity’ reshapes the sentimental story into a film that leaves off from the ‘humanization’ of animals. instead, the troupe of dancing and singing animal characters behave as their species would do naturally. balloo, bagheera and KAA, whose songs have delighted children and adults for decades, are now back to being bear, panther and python.

claerbout works at the intersection of photography, film, and digital technology. he was originally trained as a painter, before becoming more interested in time through investigations in the nature of photography and film. his works and immersive installations fuse together the past, present, and future into elastic timelines that engage the viewer with philosophical contemplations on our perception of time and reality, memory and experience, truth and fiction.

‘when I started to work with 3D imaging I learned how vision separates shape, line, structure, texture, … it even brought me back to early renaissance painting where you have a similar built up of the optical position, starting with the line and ending with texture,’ he explains. 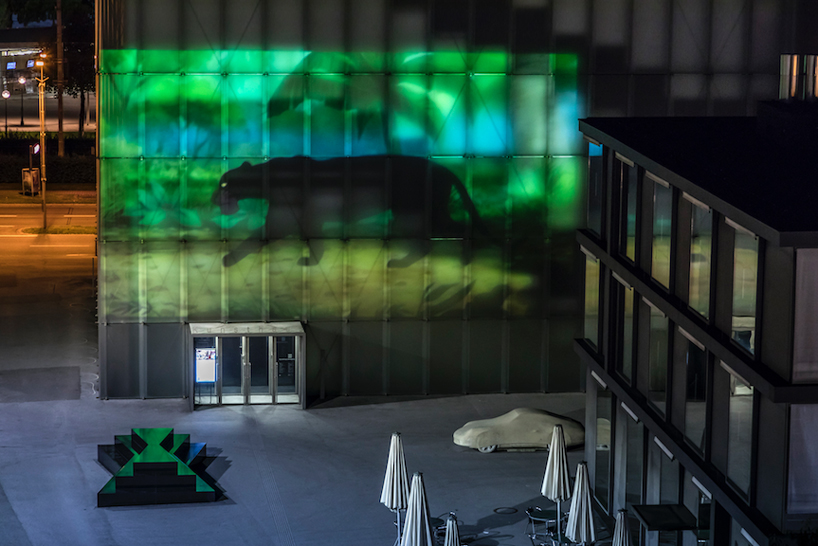 often depicting some everyday activity or familiar event, claerbout’s works alter audience perception of time and narrative, forcing them to process an unexpected reality. as is the case with ‘the pure necessity’, it also features key characteristics in claerbout’s investigations such as time and silence, emphasising the ambient sounds of the jungle and the meandering nature of animals that at times appear almost motionless. 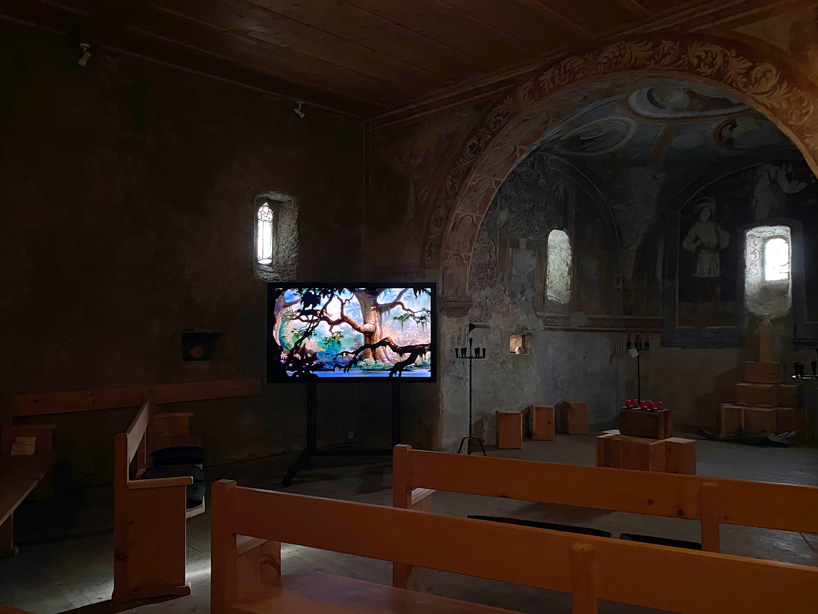 the hour-long adaptation took david claerbout and a team of professional artists over a period of 3 years to create. it involved painstakingly redrawing the individual frames of the original movie by hand, one by one, and then assembling them to create an entirely new, lifeless animation. without narrative, the animals move amidst the jungle as if the story were of their own making.

‘when we have no more confidence we can do two things: we can go mad, or we can pick up the project of the enlightenment and reconsider many aspects of what the previous confidence system was based on — and find it back.

initially, the reason why I work with the moving image is that I sense all this as not ‘within my universe in which I feel at home’, but I wanted to find back confidence!’ 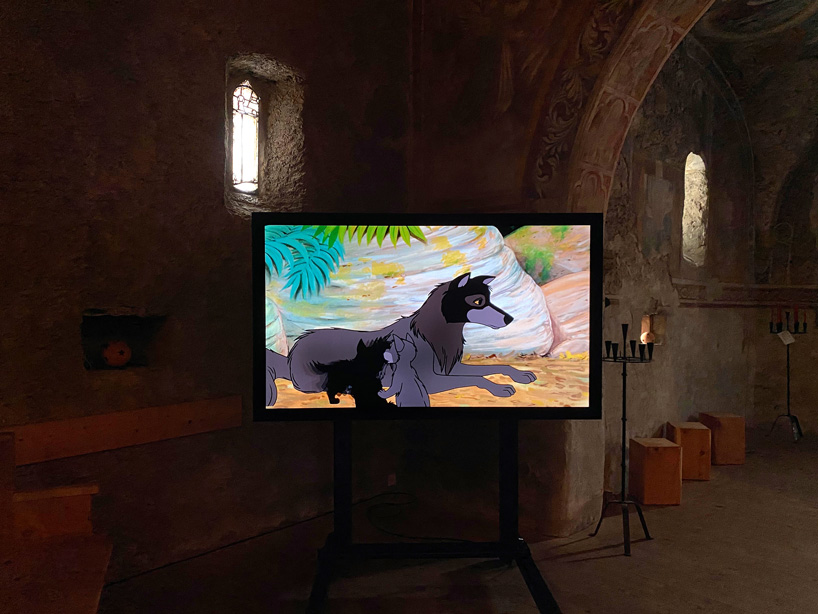 DC: ‘the cinema became a place where people came to sit down together in silence, side by side, subcontracting the conversation to the screen. cinema had become a unifying space. destruction, the carnivalesque, romance or dance could be replayed ritualistically in a temporal space that was certain to end, and often did end well. only now that we watch content on tablets -alone- it becomes possible to appreciate cinema and television as a place for being together, even if that means just sitting side by side in silence.

…and how ‘the pure necessity’ was a reflection on the distance between sentimental fantasy and reality:

‘the pure necessity’ is made frame per frame by professional animators who were asked to take away life. the choice to work with ‘jungle book’ was not accidental. the story is that of the strong and potentially cruel helping the weak, until emancipated and ready to face modern life. around 1967, the individual did not look anything like the individual of today. the individual was a single brick in the architecture of society, today the individual is that society, millions of them.’

the pure necessity is currently on show in the romanesque chapel of san bastiaun, in upper engadin in switzerland.

E.A.T. / engadin art talks is an annual forum and festival for art, architecture, design, fashion, film, science, and literature which takes place in zuoz, switzerland. E.A.T.’s mission is to provide an interdisciplinary platform for a global dialogue on the arts and different creative fields. internationally recognized for its line-up of leading artists, architects, writers, scientists, and disruptive minds from all over the world, E.A.T. has invited so far more than 140 speakers that have presented their ideas and visions on challenging social relevant themes since its inception in 2010. E.A.T. was founded by cristina bechtler together with hans ulrich obrist.