the first man-made satellite, sputnik, was launched by the soviet union over 60 years ago and changed the course of history. the beeping metal sphere initiated the space race together with the creation of a host of extraordinary technological objects. in their pursuit of technological achievement, it is unlikely that soviet designers and engineers were considerate of the beauty of what they were creating, though in retrospect these objects have acquired an alluringly brutal aesthetic. in celebration both of the achievements of the soviet space program and these early designs, award winning photographer docubyte presents the photo series ‘cosmic pop’ as a vivid memorial to the conquerors of space. 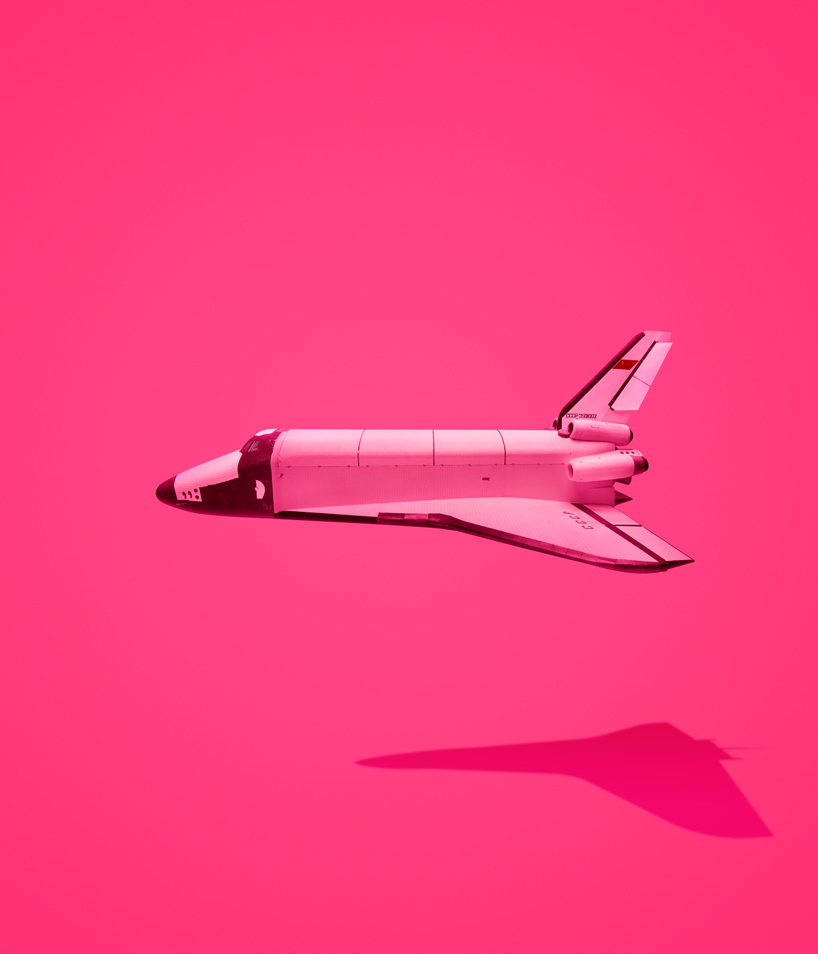 photographer docubyte illustrates: the 36-meter long BURAN was the first spaceplane to be produced as the soviet buran programme, with construction beginning in 1980. despite many atmospheric flights this 1984 OK-GLI never achieved orbit, with the BURAN (K1) in fact only ever recording approximately three and a half hours of spaceflight, and the program discontinuing in 1993. 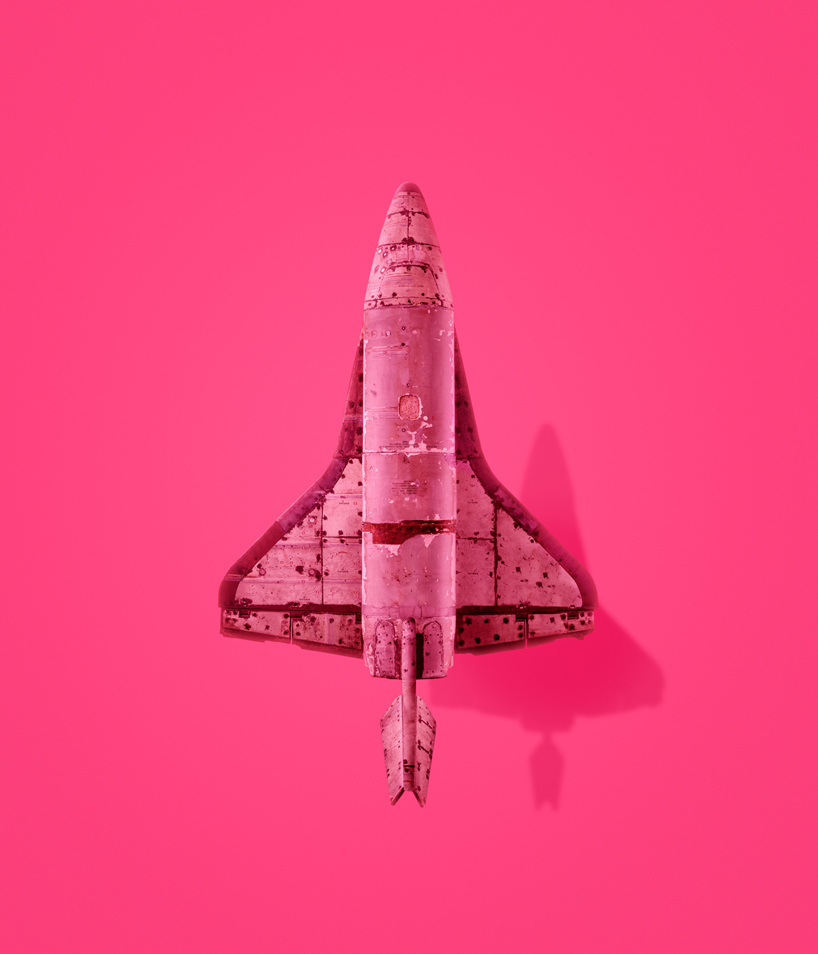 the BOR-5 (БОР-5) is an ‘unpiloted orbital rocketplane.’ this 1:8 scale test flight vehicle, used to study the main aerodynamic and stability characteristics of the buran soviet shuttle vehicle, and came hurtling back to earth from its ballistic suborbital trajectory in 1988, the same year as the only launch of its full-sized counterpart. 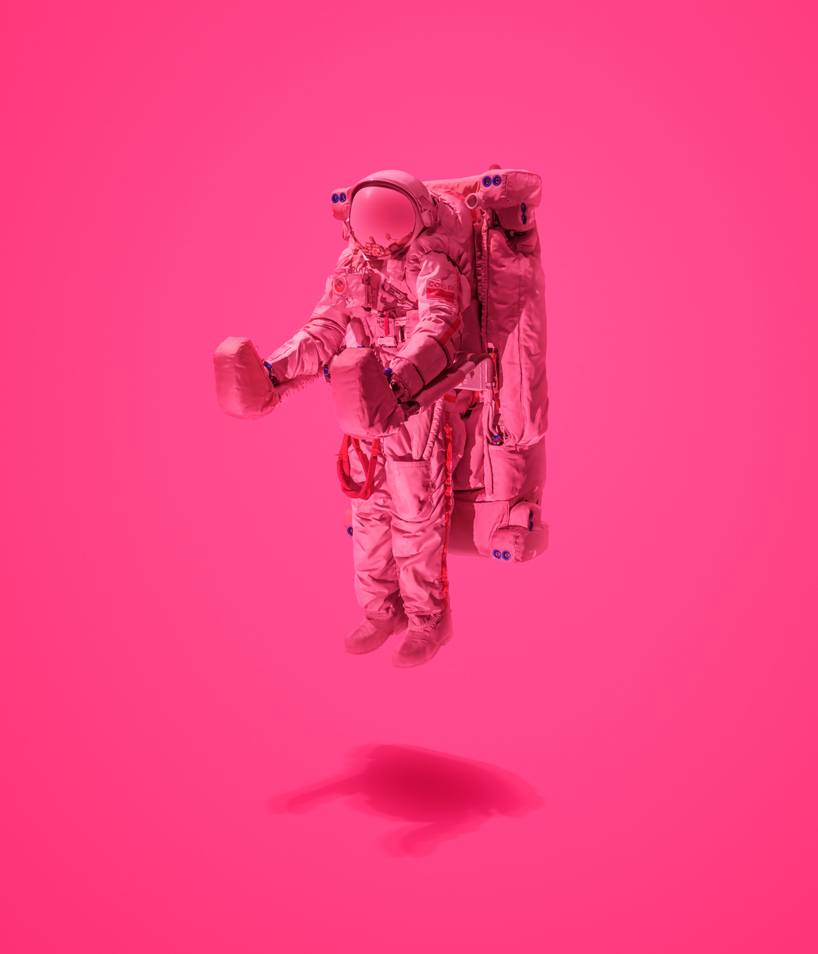 the extravehicular activity spacesuit was used for spacewalks from the ‘mir’ space station. the propulsion unit behind it allowed a cosmonaut to manoeuvre independently, wearing it like a backpack and operating controls on the hand panels. it propels the cosmonaut using small bursts of gas from nozzles. 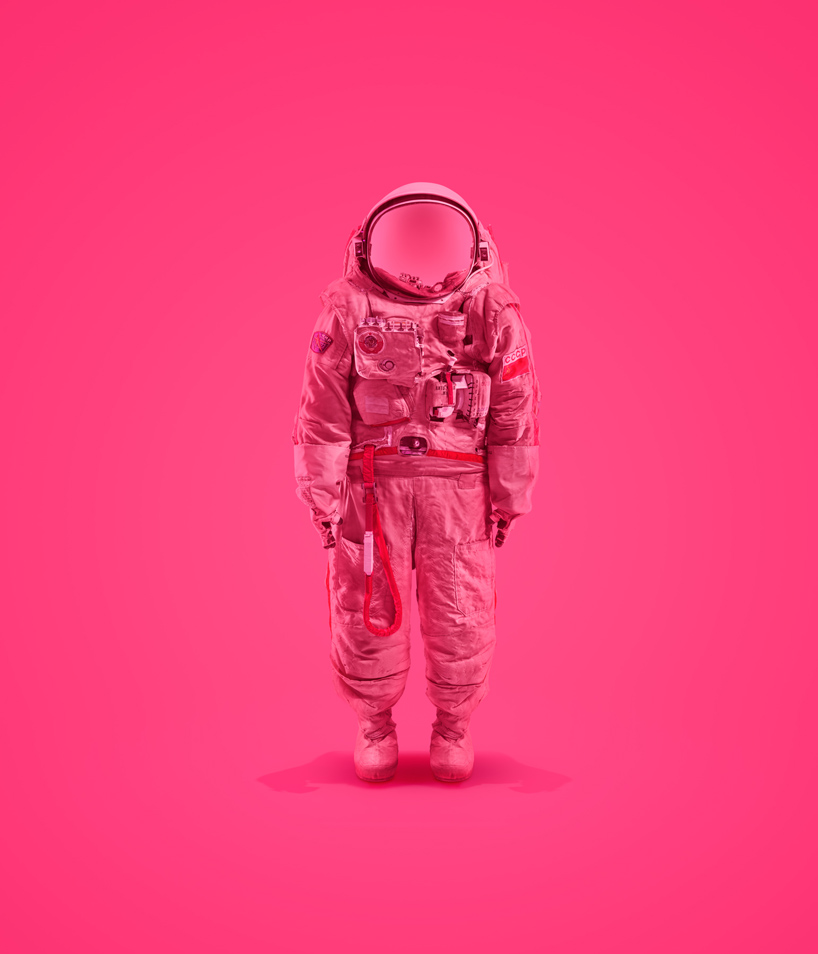 the orlan space suit (meaning ​sea eagle)​ is a series of semi-rigid one-piece space suit models designed and built by NPP zvezda. this ​DM was suit used from 1985-1988 for salyut-7 and mir missions by the last soviet cosmonauts. 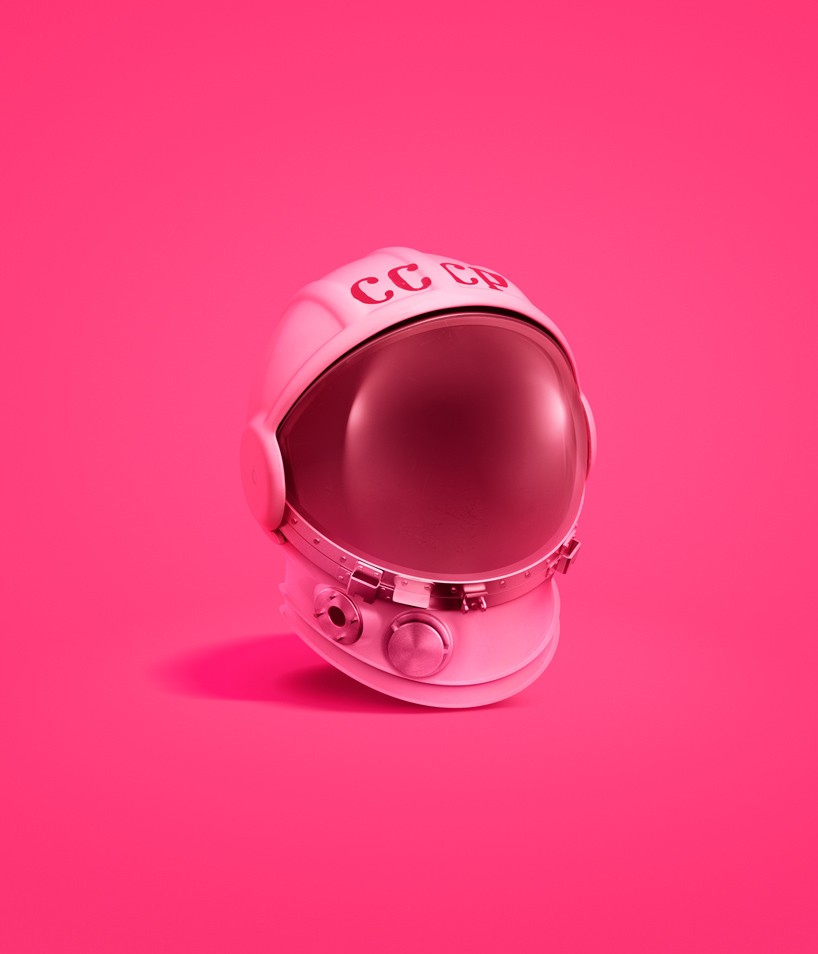 as the first man in space, yuri gagarin was just 27 years old when flew his historic mission. this iconic helmet and its distinct red CCCP letters were allegedly painted as a last minute addition, effectively​ marking gagarin as a soviet citizen so that he would be recognized after parachuting to safety following ejection from the spacecraft. 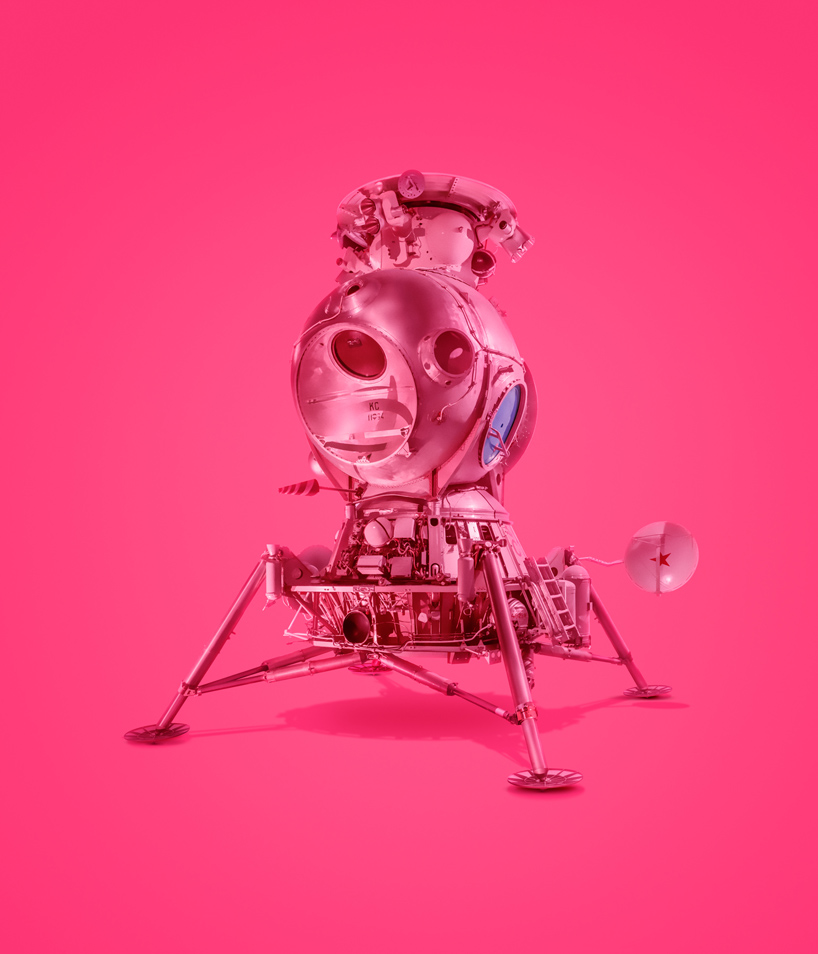 the LK (lunar craft) lander was a piloted moon lander developed in the 1960s as part of the soviet attempt to put humans on the moon. analogous to the apollo program, several LK crafts were flown in earth’s orbit, but no LK lander ever made contact with the surface of the moon. 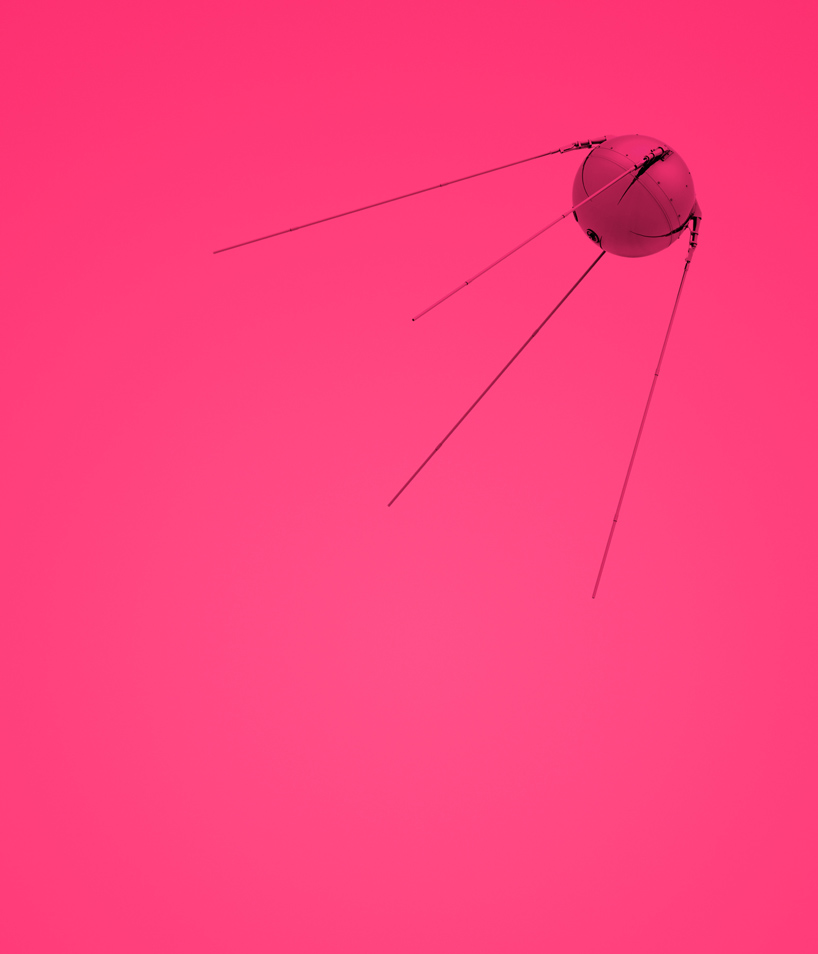 the legendary spherical satellite which prompted the space race. this beeping icon launched in 1957, causing panic and awe in equal measure. burning up in the earth’s atmosphere three months after its launch; its lifespan enabled 1440 orbits of the earth, prompting the USA into direct competition. 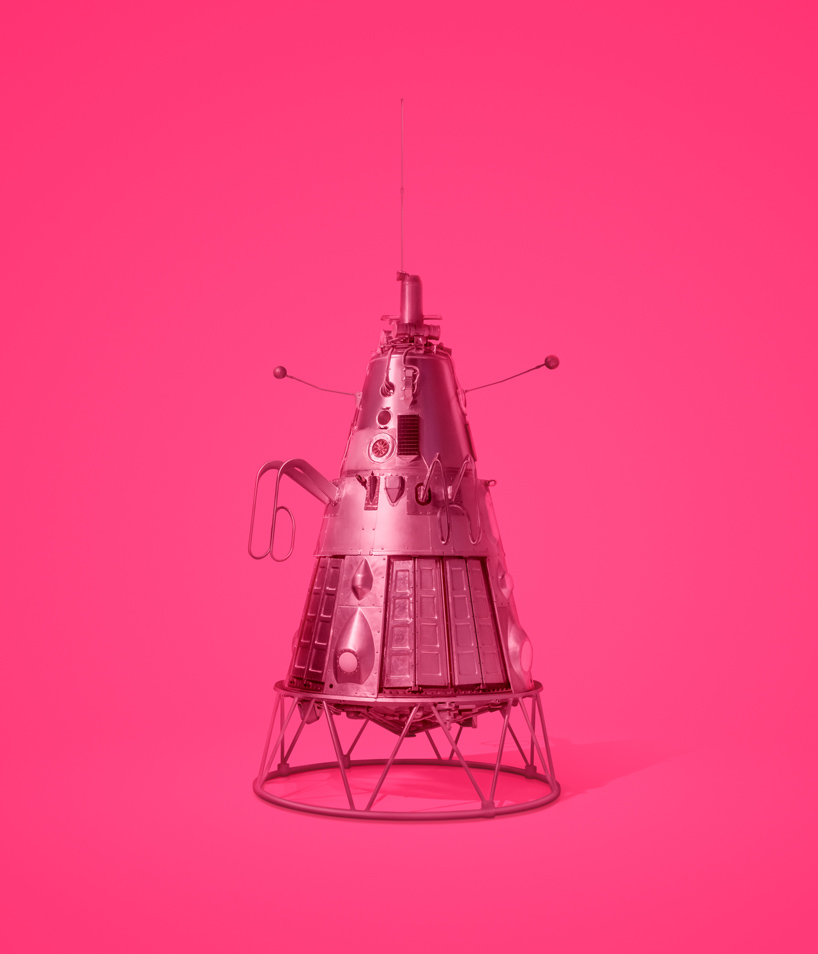 dubbed ‘project D,’ the third of the ‘sputniks’ launched in 1958. the satellite carried atmospheric research equipment and proved such soviet progress, it is often attributed for prompting the formation of NASA. 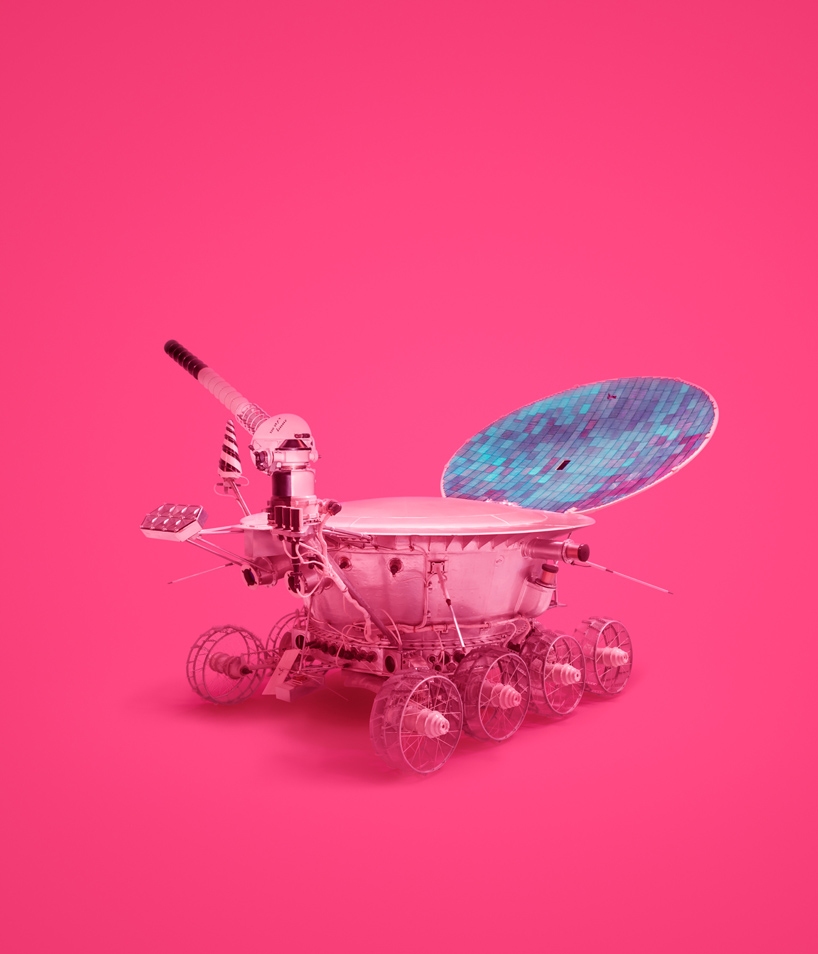 the ‘lunakhod’ was the first of two unmanned soviet moon rovers to reach the lunar surface in the 1970s. while topping out at a speed of 2km/h the lunokhod held the record for maximum distance traveled on another planet for over 40 years. 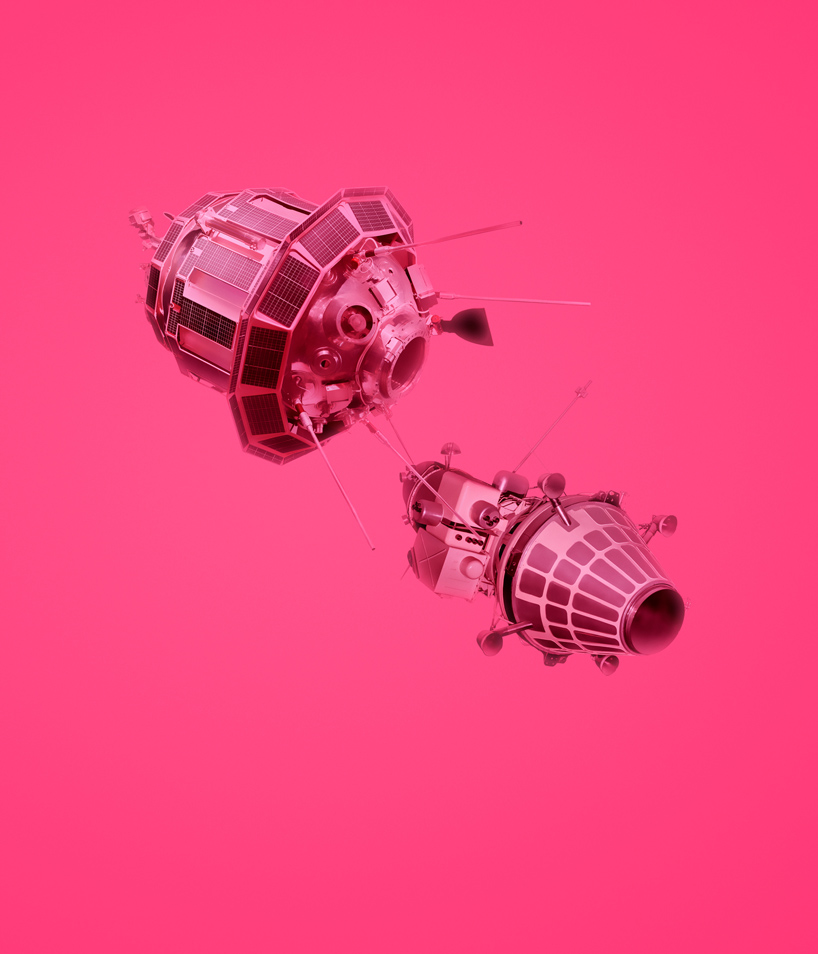 the luna 3 was launched as part of the 1959 luna program. the probe was the first spacecraft to have ever photographed the far side of the moon. in 1966 in an unnamed mission, the luna 9 achieved the first ever soft landing upon the moon. 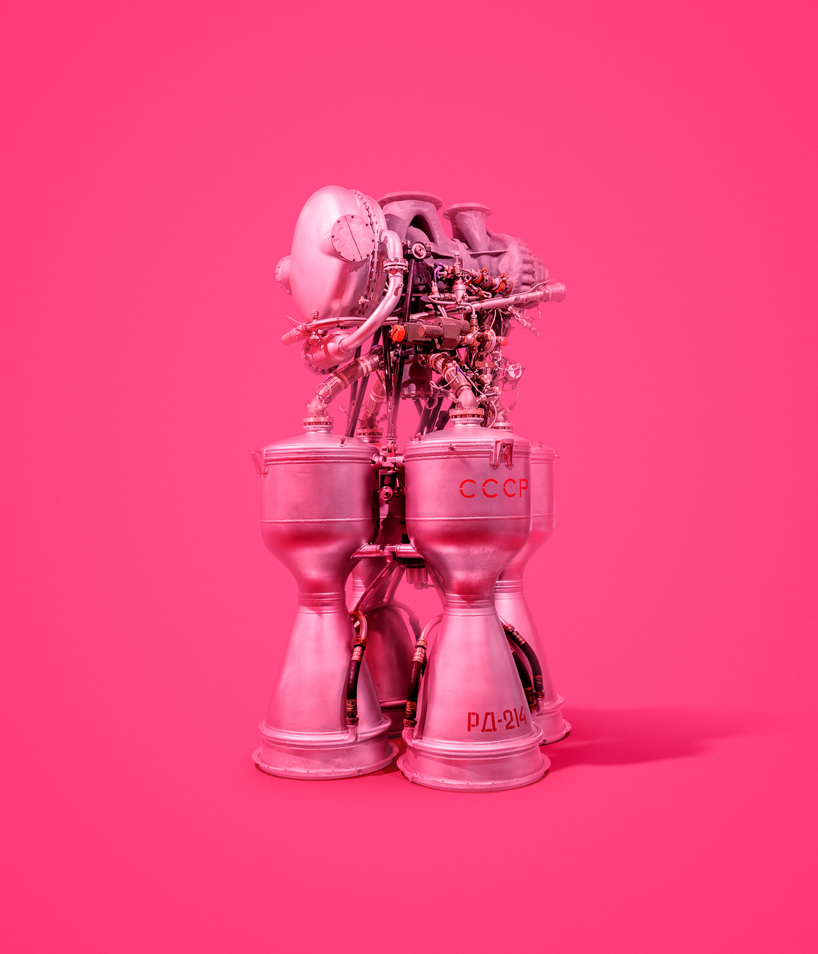 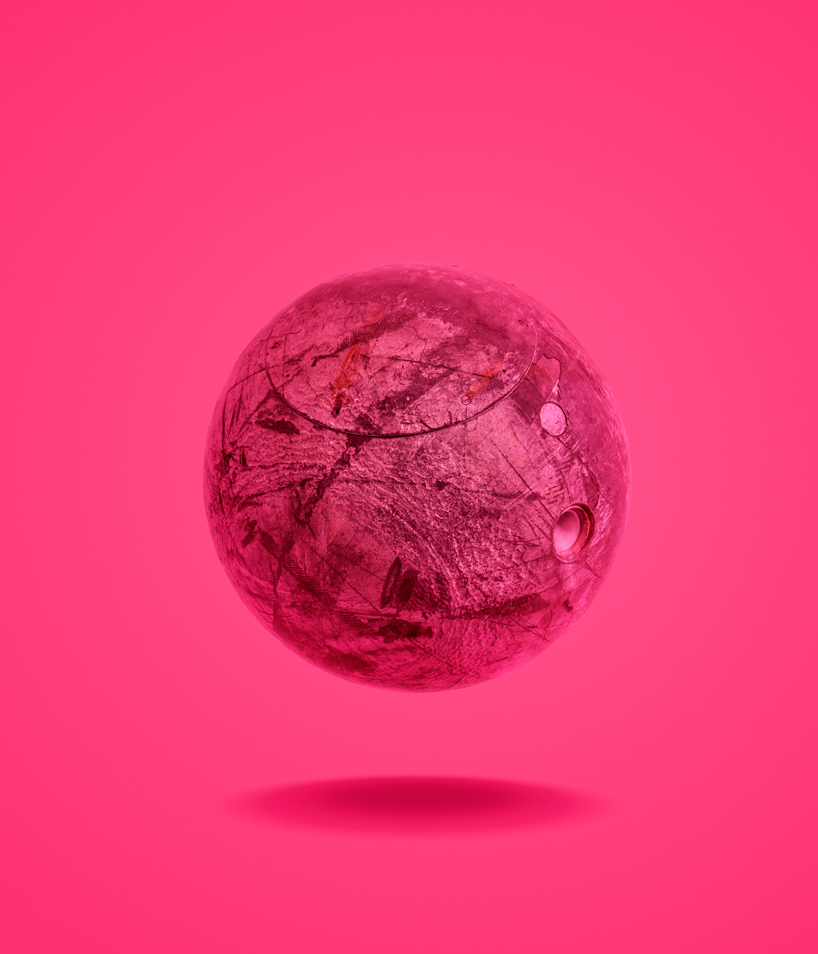 this spherical descent capsule was launched from plesetsk, the former soviet union’s northern cosmodrome on november 15, 1992. the capsule was filled with messages to the american people and promotional materials of russian and foreign firms in connection with the 500th anniversary of christopher columbus’ voyage of discovery to america. 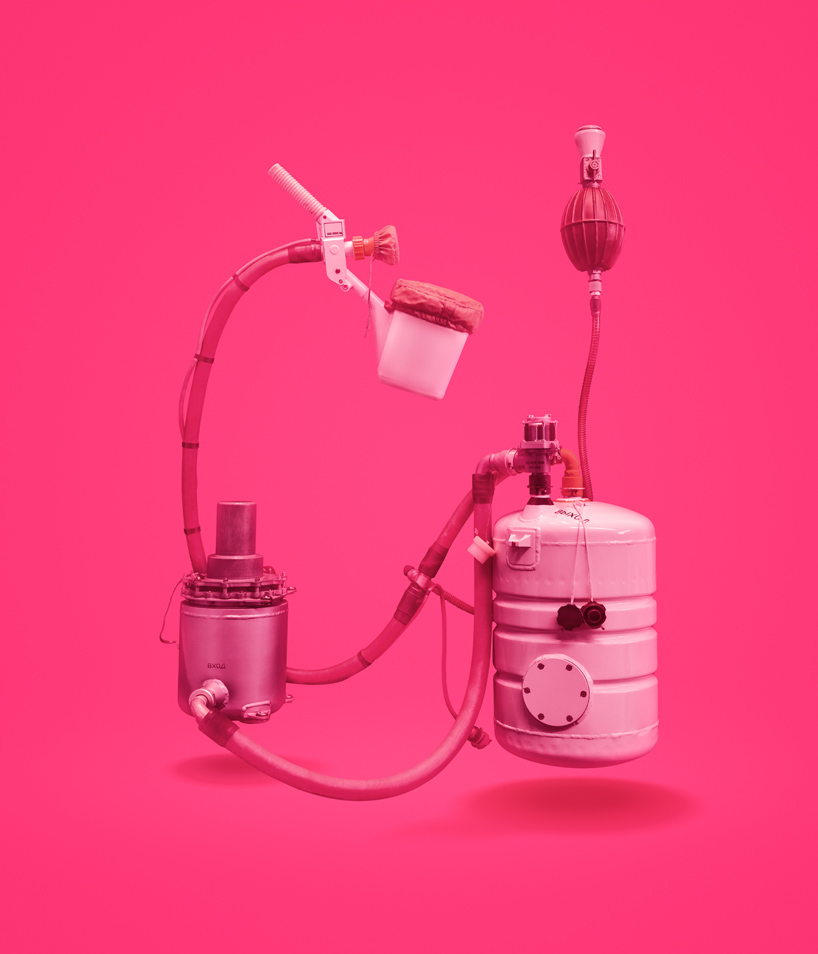 the space toilet operates in a similar way to a vacuum cleaner. the system features both a feces receptacle and urine receptacle operated by a hand pump. after use of the urinal, the pipeline is closed by a tap, and the urinal is covered with a lid to prevent unpleasant smells. 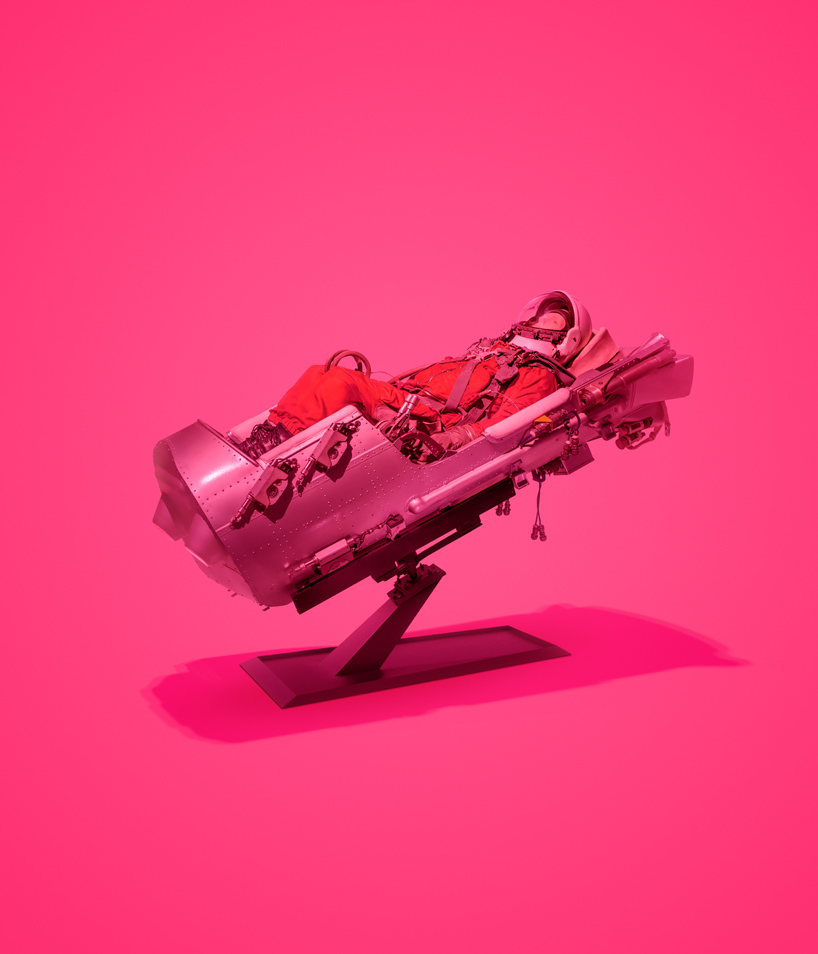 the ejection seat was used aboard ‘vostok,’ the spaceflight project to put the first soviets into low earth orbit and return them safely. this seat was used to exit the descent module upon re-entry. yuri gagarin used the seat after completing the first manned orbit of earth after one complete revolution in the vostok 1 spacecraft on 12th april 1961, the flight lasting 108 minutes. 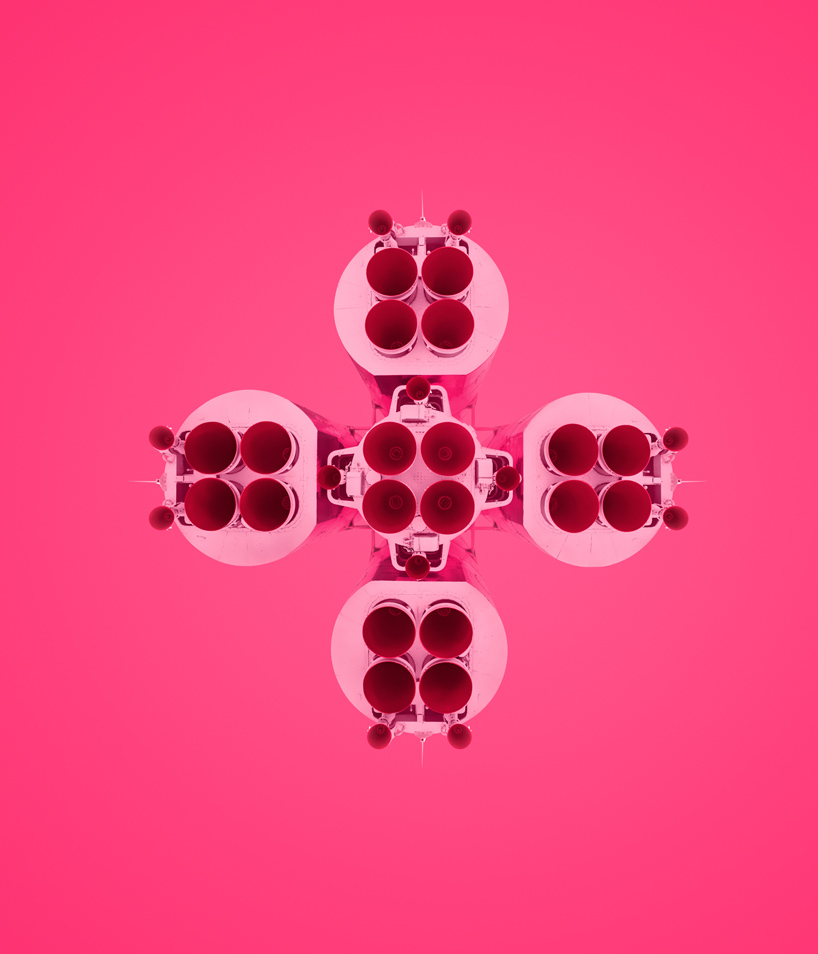 vostok (translated as ‘east’) derived from the soviet R-7 semyorka ICBM and was designed for the human spaceflight program. this family of rockets maintains a legacy of firsts; launching the sputnik and vostok, the first satellite and the first manned spacecraft respectively. 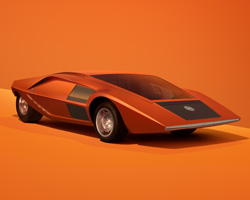 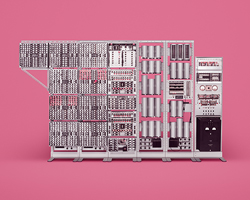 May 18, 2016
docubyte and INK document the never-before-seen history of computer hardware