2020 marked the tenth edition of the renowned E.A.T. / engadin art talks, which took place on january 25th and 26th, 2020 in zuoz, switzerland. each year, a new theme guides the conversations and this year ‘silent — listen‘ determined an impressive programme featuring talks by rolf sachs, isabel mundry, and london-based artist marianna simnett, which explored the many aspects and relationships of silence and listening in the context of their various creative practices.

ahead of engadin art talks, designboom spoke with simnett to discuss her recent short film ‘the bird game’, a wicked fairy tale in which a loquacious and bloodthirsty crow lures six children to a secluded mansion and snares them in a sequence of deranged games… 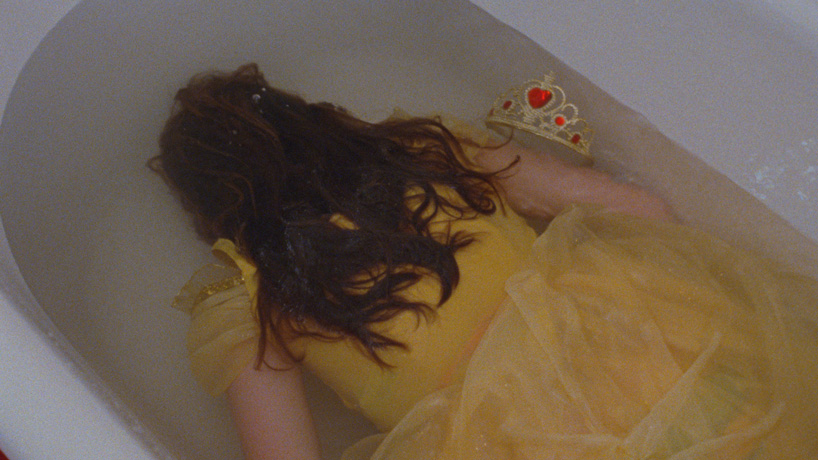 designboom (DB): where did the inspiration behind your latest film ‘the bird game’ come from and how did you start to work on it?

marianna simnett (MS): I used to keep pigeons, and it always felt magical when they returned home. then I read about different species’ sleep patterns. birds are the only non-mammalian animal to have REM sleep, the stage associated with dreaming in humans. birds are little clues, they seem to know more than we do. the electrical activity of their brain waves is similar to manic depressive humans. they also don’t really need sleep to survive. the bird game stemmed partly from my research into avian sleep, and the idea that sleep can’t be stolen. our lives are pumped with acceleration and speed. what if we never needed to stop? 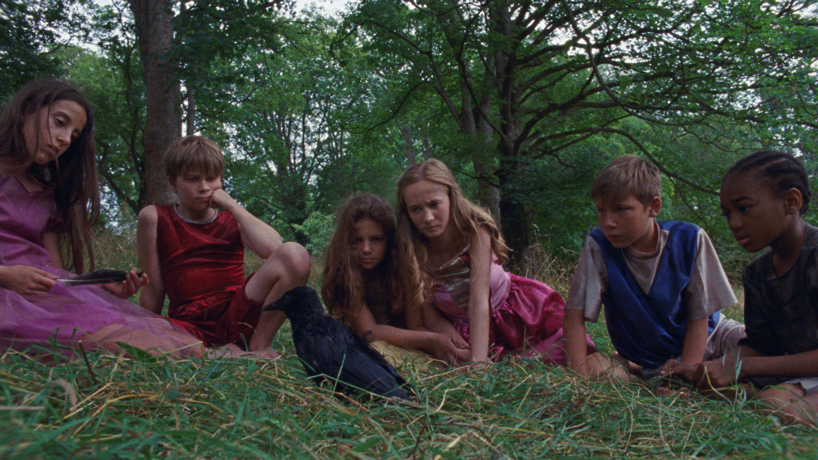 MS: ‘the bird game’ film casts a live crow, voiced by joanne whalley, as the main protagonist. she lures a group of kids into a mansion and kills them off one by one, promising them the ability to never sleep again. I co-wrote the script with charlie fox and it was filmed at waddesdon manor, shot on 16mm by robbie ryan BSC, with music by oliver coates. the kids wore butchered disney costumes. it was like a twisted video game where everything goes deliciously wrong. 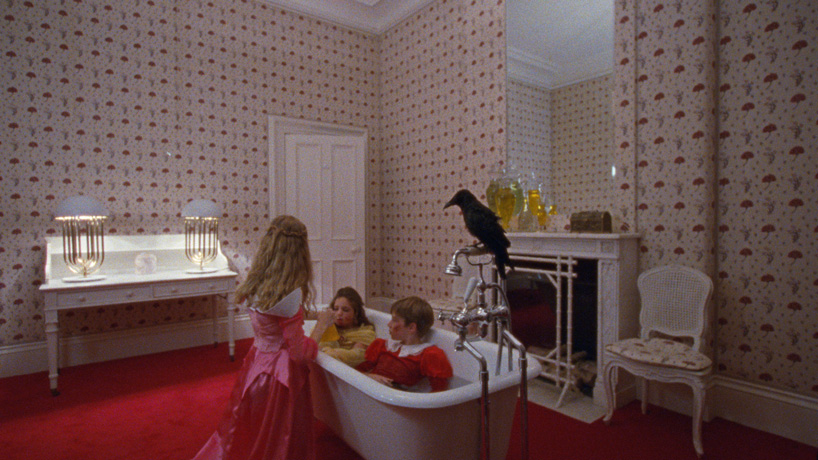 DB: was it difficult to move from using your own body as an artistic medium to using those of children and live animals?

MS: it wasn’t a move. my first film the udder, 2014 casts cow’s udders and children as the lead protagonists. I always introduce an element of chaos on my film sets, be it children, animals, knives, rain, cockroaches, surgery, death. when I’ve used my own body, it’s usually been because I wouldn’t put another body through those enduring or painful procedures. I can use myself as a guinea pig, but I’m not ready to go to jail. 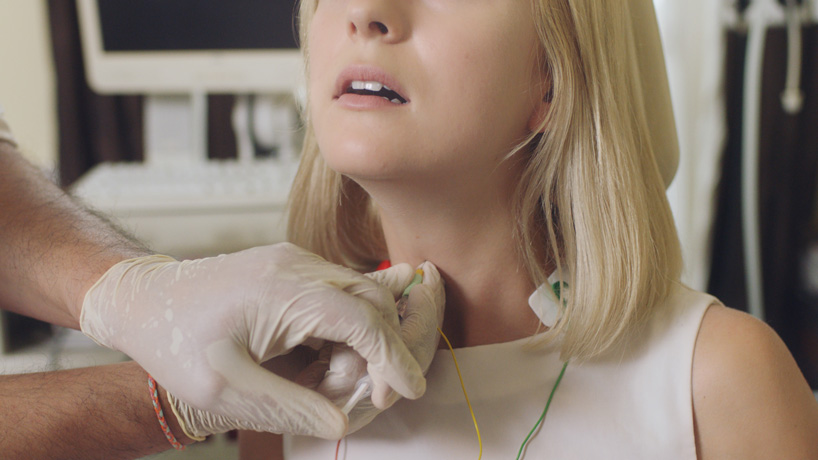 the needle and the larynx (video still), 2016. courtesy: the artist and serpentine galleries, london

in the needle & the larynx, marianna simnett has a surgeon inject her larynx with botox, a procedure usually undergone by people wanting their voices to be lower. shot in excruciating slow motion, the surgeon’s needle enters, probes, then withdraws from her throat. a soundtrack details the surgical description of the procedure with a pop song about botox, sung by simnett in her newly deepened voice.

in another piece, titled ‘blue roses’, she recites a monologue about blood while suspended upside down, until the point of passing out. it is the final part in a trilogy of films exploring ideas of sexuality, gender, technology and agency in relation to specific body parts, in this case, a varicose vein. 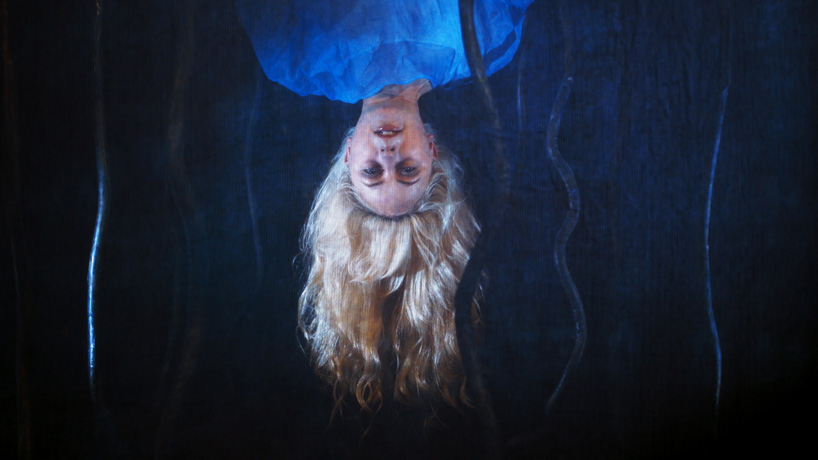 DB: in your previous works ‘udder’, ‘blood’ and ‘blue roses’, it is hard to gauge whether disease and contamination are damning or liberating states. is it your intention to be ambiguous?

MS: I see disease and contamination as a hopeful reality. I am against closed borders and try to emphasise the chimeral, fluid, metamorphosing states of bodies. so often we try to deny the colonies of bacteria swarming through us, the very many beings that make up who we are. forcing bodies into boxes leads to violence on a greater level. 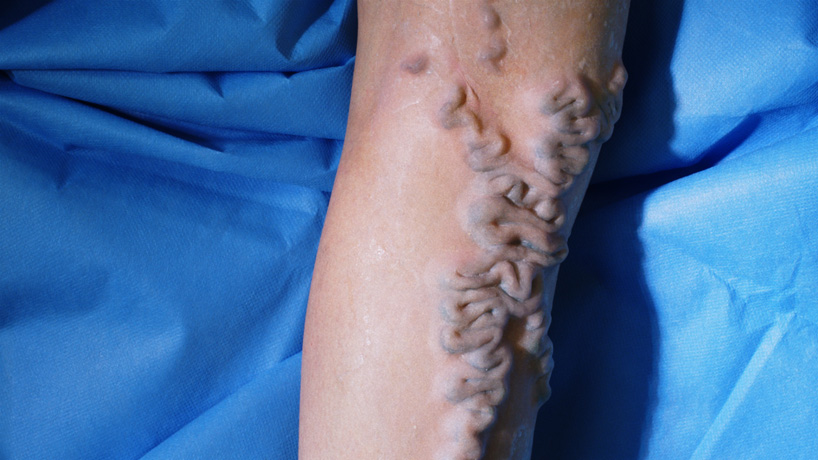 DB: are you cynical about the human condition? 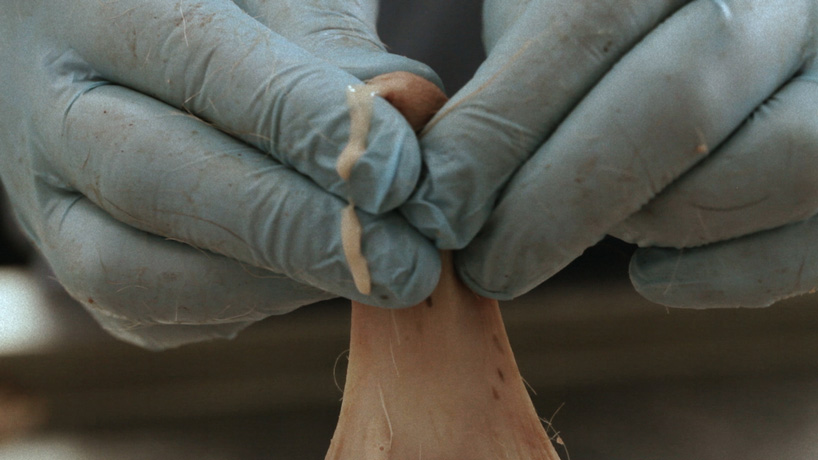 the udder (video still), 2014. courtesy: the artist and jerwood/FVU awards

DB: where does the medical research that goes into your work come from? do you study the body yourself?

MS: I get sucked into medical stories, but not only from a scientific perspective. I love learning bodily secrets and probing forbidden recesses of the body and brain. it makes me feel frightened and gives me a weird high. I use the operating theatre as a platform upon which I can cut up bodies and put them back together again in strange ways.

DB: how important is it to you to create visceral reactions in your audience?

MS: it’s important to create experiences that can be felt through skin. I want gooseflesh. viscera comes from the thought that the bowels were the seat of emotion. viscera, internal organ. my work doesn’t teach lessons. it comes from the strange sticky feelings that everyone knows but is taught to ignore. I don’t go out of my way to find new tricks to make people faint. those reactions are aftereffects. the body says ‘stop. enough. I surrender’. 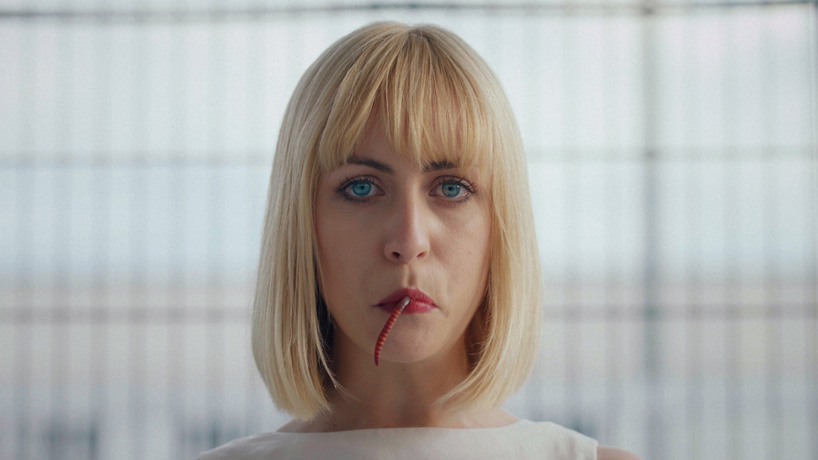 marianna simnett in blood in my milk (video still), 2018. courtesy: the artist and matt’s gallery

DB: has your work ever taken you to a point that even you, yourself, have felt uncomfortable? 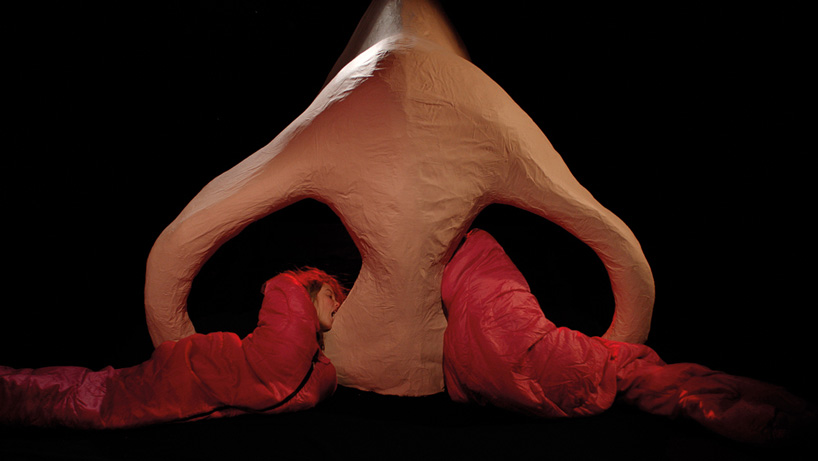 DB: have you ever considered embarking on a full-feature length film? 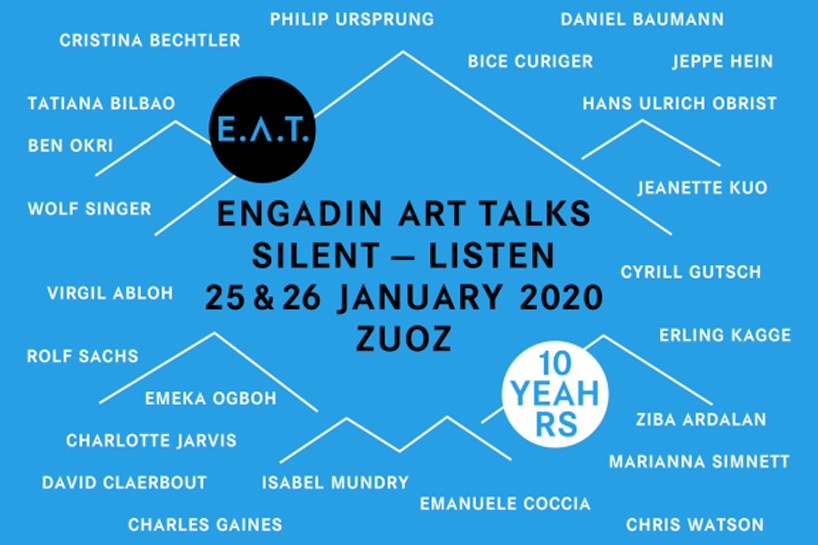 you can see the programme in full including a list of all speakers here.

E.A.T. / engadin art talks is an annual forum and festival for art, architecture, design, fashion, film, science, and literature which takes place in zuoz, switzerland. E.A.T.’s mission is to provide an interdisciplinary platform for a global dialogue on the arts and different creative fields. internationally recognized for its line-up of leading artists, architects, writers, scientists, and disruptive minds from all over the world, E.A.T. has invited so far more than 140 speakers that have presented their ideas and visions on challenging social relevant themes since its inception in 2010. E.A.T. was founded by cristina bechtler together with hans ulrich obrist. 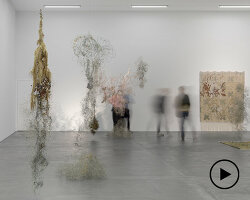 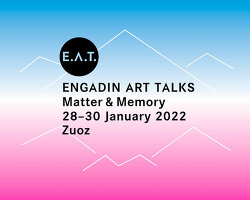