as an examination of art and consumerism, expression and function, and personal and industrial, filipino graphic designer eisen bernardo has completed the ‘logo+art’ series — a set of 15 creative mashups between historic paintings and contemporary corporate identity design. cut-out pieces from painted masterpieces like ‘starry night’ by vincent van gogh and ‘the birth of venus’ by sandro botticelli are configured into the shape of company logo marks like NASA and barbie. carefully positioned within each brand emblem, the fine artworks match thematically and symbolically to the corporate message — for example, titian’s ‘madonna and child in a landscape’ fits perfectly inside the UNICEF logo; the ferrari trademark is seamlessly integrated with the painting of ‘napoleon crossing the alps’ by jacques-louis david.

starbucks + self-portrait with thorn necklace and hummingbird by frida kahlo

puma + scout attacked by a tiger by henri rousseau

shell + the birth of venus by sandro botticelli

UNICEF + madonna and child in a landscape by titian

apple + the son of man by rené magritte 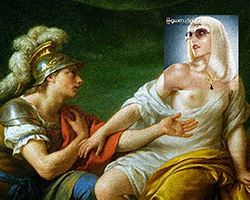