A terminal of algorithmic, technologically-laced art can be explored at Zurich Airport, Switzerland, as elementum and Kate Vass Galerie collaborate to present ‘Liebe Maschine, male mir’. The group NFT exhibition curates the latest exploratory works by contemporary visionaries in digital art. Visitors are immersed in this perspective of the future evolutions of art, where the creator sets the program while the machine delivers the output, rich in rare glitches and controlled coincidences. Not only are a range of releases as well as live mints on show, the gallery opens a diverse array of networking events, talks and further exhibitions.

Clip of Frieder Nake‘s ‘Homage to Gerhard Richter’ NFT, at elementum.art
(Main image: Ganbrood’s ‘In this hard rock, whiles you do keep from me’ NFT; image courtesy of elementum and Kate Vass Galerie)

All visuals courtesy of elementum.art, unless stated otherwise

To start the exhibition, Frieder Nake (b. 1938), one of the founding fathers of computer art and former student of Max Bense, dedicates his genesis NFT, titled ‘Homage to Gerhard Richter’, to the namesake artist who he considers the painter of the century. An algorithm continuously generates the striped images of Richter in endless variations for the new artwork. 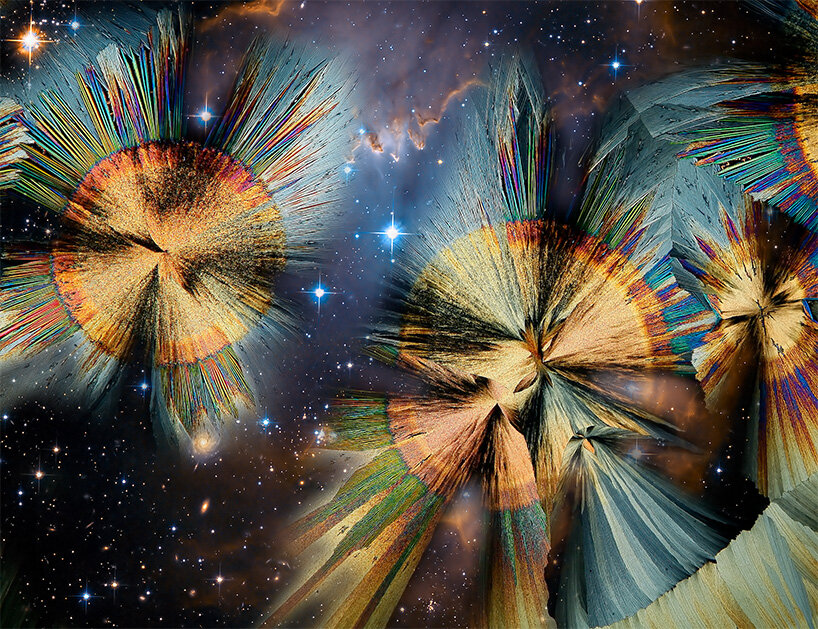 Renowned for visually uncovering the aesthetics of the unknown, Manfred P. Kage (1935-2019) illuminates the invisible connection between human existence, nature and the cosmos in his new multimedia. The work combines the crystallization of acenapht compounds in the microscope with an astro-image from NASA. The result captures the all-encompassing rhythm of chaos and order between the elements. 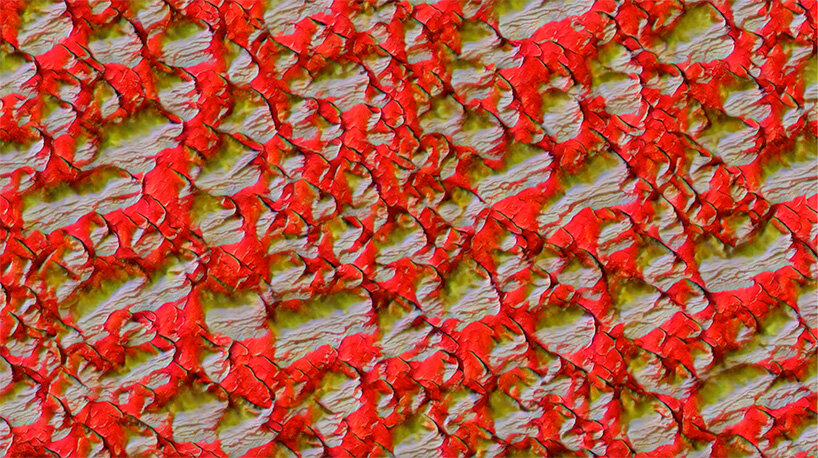 Alexander Mordvintsev (b. 1985) presents a new body of work from his latest series, titled ‘Autumn Life’. The artist and creator of the DeepDream algorithm; one of the recent pioneers of digital art, conducts scientific research at Google on visualizing deep neural networks. The new visuals are inspired by forests in fall time and its inhabitants. These are created using cellular automata-based artificial life simulation. His three 1/1 unique NFT drop will be released on Friday, 18 November at 5 pm CET.

Ganbrood’s ‘This Island’s Mine’ NFT

Using visual themes that have inspired the artist since youth – mythology, film, photography and comics, ‘S O M N I V M’ by Ganboord (b. 1968) uses AI as a tool to draw these references together. The artworks, titled ‘In this hard rock, while you do keep from me’ and ‘This island’s mine’, takes viewers on an exploration into pseudo-figurative and mind-altering effects like pareidolia, apophenia and synchronicity. Sci-if elements create cinematic universes where space adventures meet renaissance scenes. 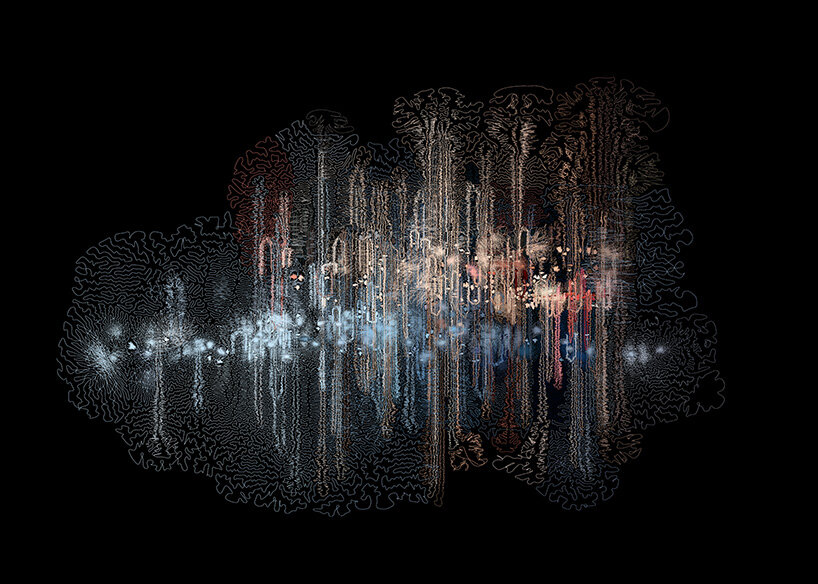 Composer, visual artist and creative coder Espen Kluge (b. 1983) is fascinated by the exploration of semi-randomness in moments of improvization, as reflected in the 2019 ‘Alternatives’ and 2022 ‘Lyrical Convergence’ series. Both artworks use the same set of data but different algorithms, as a showcase of the diversity of human perception, objectivity and subjectivity. The portraits are monumental but vivid with vector-based lines that evoke a certain dynamism. The artist hand-writes the algorithm in pure javascript: the code takes photographs as input, loops through all the pixels in a raster image, chooses some at semi-random, and then engages pixels by putting lines between them. Each unique result expresses something personal, vibrant, imaginative and lyrical.

Hein Gravenhorst (b. 1937) presents a new series of psychedelic digital transformations. The artist, one of the co-founders of generative photography together with Gofftried Jäger, Pierre Cordier and Kilian Breier, developed photomechanical transformations using countless exposures in the darkroom in the 1960s. The new works alter patterns, reminiscent of medieval rose windows, into hypnotic computer animations. 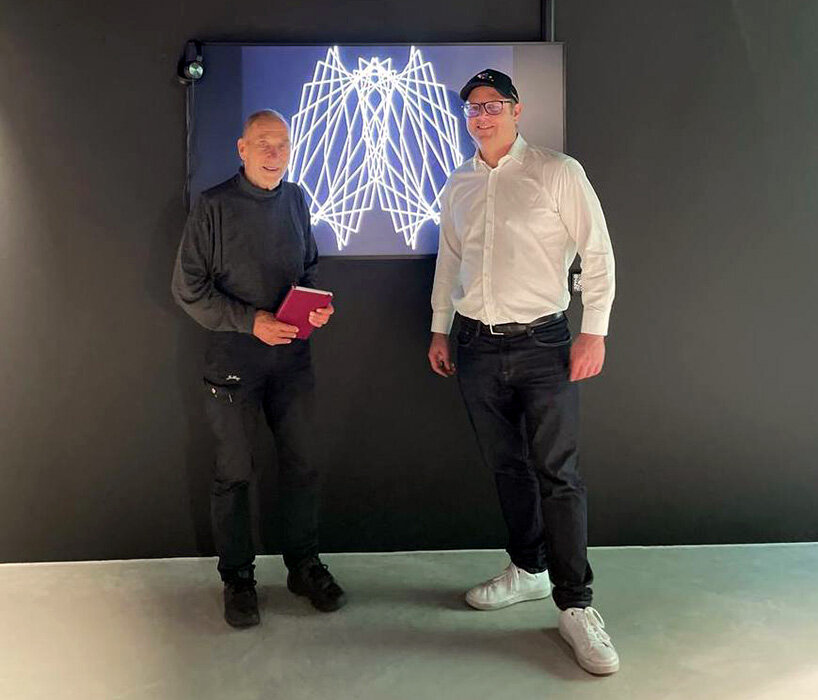 Herbert W. Franke (1927-2022) produced the film, ‘Rotations / Projections’, that revives the namesake three-dimensional program that created graphics using visual projections of spatial movements in the past. This artwork experiments with a basic program written by Gerhard Geitz, Monika Gonauser, Egon Hoerbst, and Peter Schinner. Sequences of an experimental dance performance at the Bavarian State Opera in Munich by Walter Haupt in 1974, are accompanied by electronic music by Peter Scheffler, all made in real time on a 16mm film.