elmgreen & dragset have transformed new york city’s rockefeller center by adding an upright swimming pool to the pedestrian plaza’s fifth avenue entrance. presented by public art fund, ‘van gogh’s ear’ is a large-scale sculptural installation that contradicts expectations of both this familiar symbol of summer and the iconic site on which it has landed. the artist duo have carefully designed and crafted each detail of the piece to mimic a garden pool — with a cyan blue interior, polished stainless steel ladder, bright lights, and a diving board opening up to public view. from the undulating curves of the varying depths, to the protruding blue diving board, the sculptural details become particularly evident as they are isolated vertically and above ground. surrounded by tourists, commuters, skyscrapers, and city slickers, ‘van gogh’s ear’ stands out as a surreal object uprooted from its usual environment, in turn prompting a cerebral, poetic response to the object as well as its setting.

we spoke with artists michael elmgreen and ingar dragset about the thinking behind ‘van gogh’s ear’, some of the recurring themes they’ve adopted for this piece, and their experience working in the public realm. 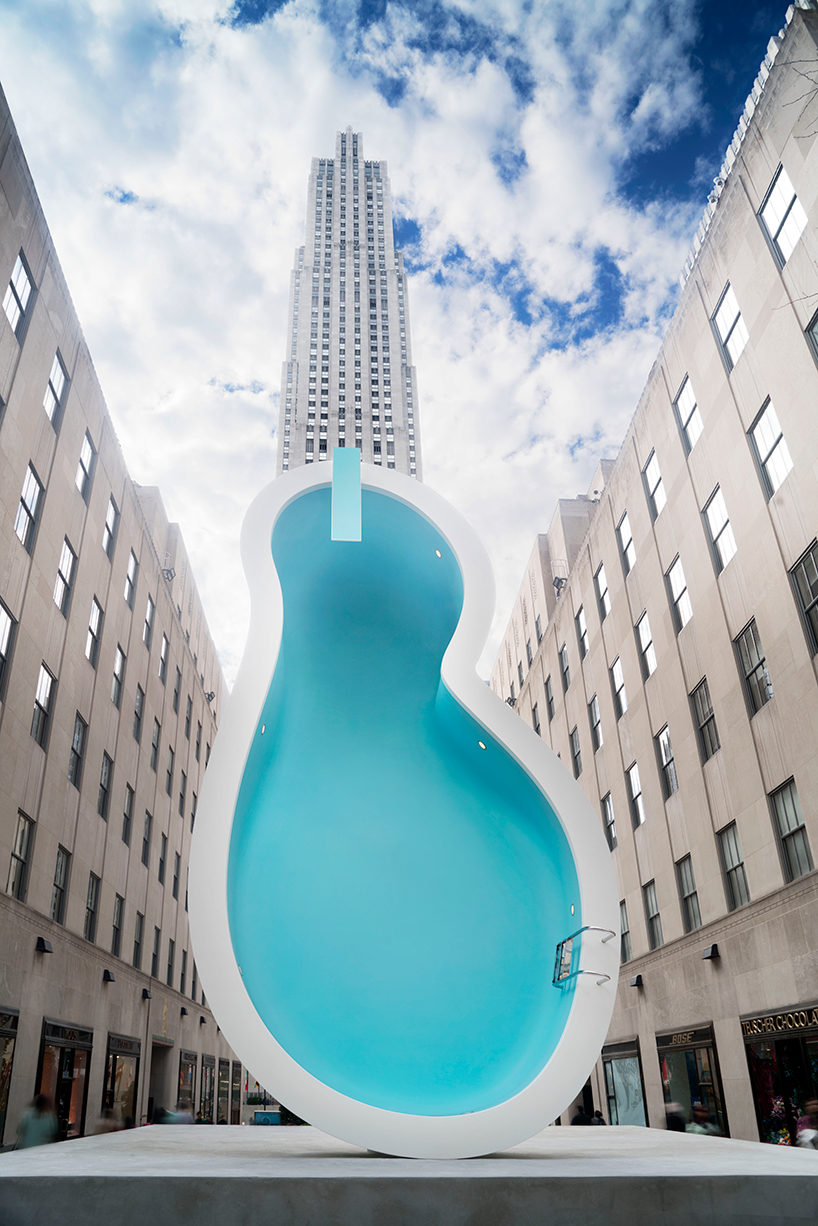 designboom: ‘van gogh’s ear’ — from where did this title arise?

elmgreen & dragset: the title ‘van gogh’s ear’ plays on the mythological versus the ordinary. the title also refers to the shape of the swimming pool. it opens up the possibility for a different perception of the form itself. and like the myth of van gogh cutting off his ear in despair, the dislocated pool will hopefully make people wonder ‘why?’, and pursue their own reasoning behind this odd scenario. 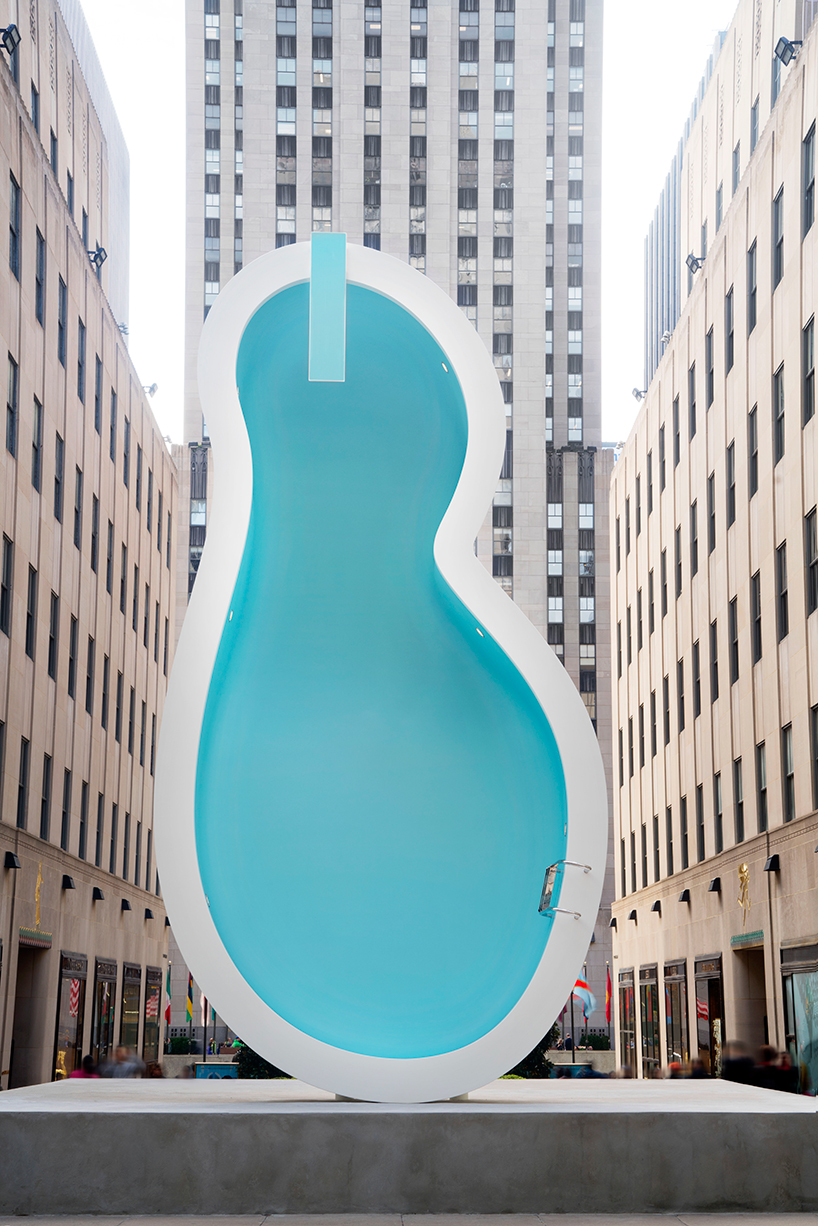 DB: how was the experience working alongside public art fund for this project?

E&D: public art fund has been immensely supportive in this process—they’ve been putting on public art projects at rockefeller center for years, so it has been a seamless collaboration to work with them. it’s great to see an organization dedicated to bringing artworks to a wide audience, free of charge, right in the middle of new york city. when you do an art project in public space, outside the normal gallery or museum context, you need to have in mind that the work must function in a different way. 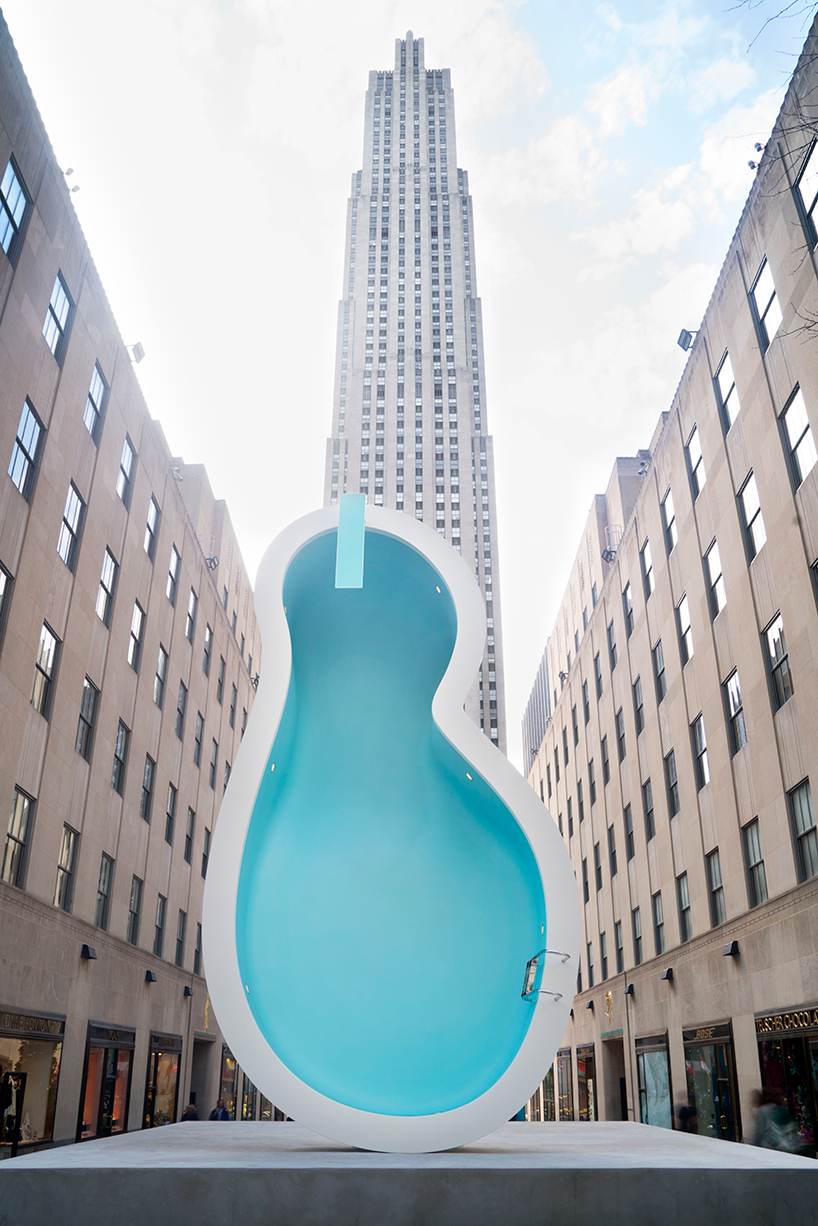 DB: in what way is this piece an extension of, or how is it informed by, the idea of marcel duchamp’s readymades?

E&D: in one sense, van gogh’s ear recalls duchamp’s readymades, which present mass-produced, everyday objects as art. in general, pools are mass-produced and commercially available, but even though it looks like a swimming pool, our sculpture is actually handcrafted and custom made. it was really important for us that the sculpture also worked visually from all sides.

DB: many of your past works feel as if they’ve been transplanted from a different environment entirely, like ‘prada marfa’ for example. what is the desired effect of placing ‘van gogh’s ear’ in the context of one of new york city’s busiest and iconic public places?

E&D: we like to use displacement as a way of bringing attention to the object itself, as well as the surroundings and the local context. it is almost like an alien object had landed from outer space. the pool reminds you of lazy days under the sun, which contradicts the reality of the busy business life happening here at rockefeller plaza. 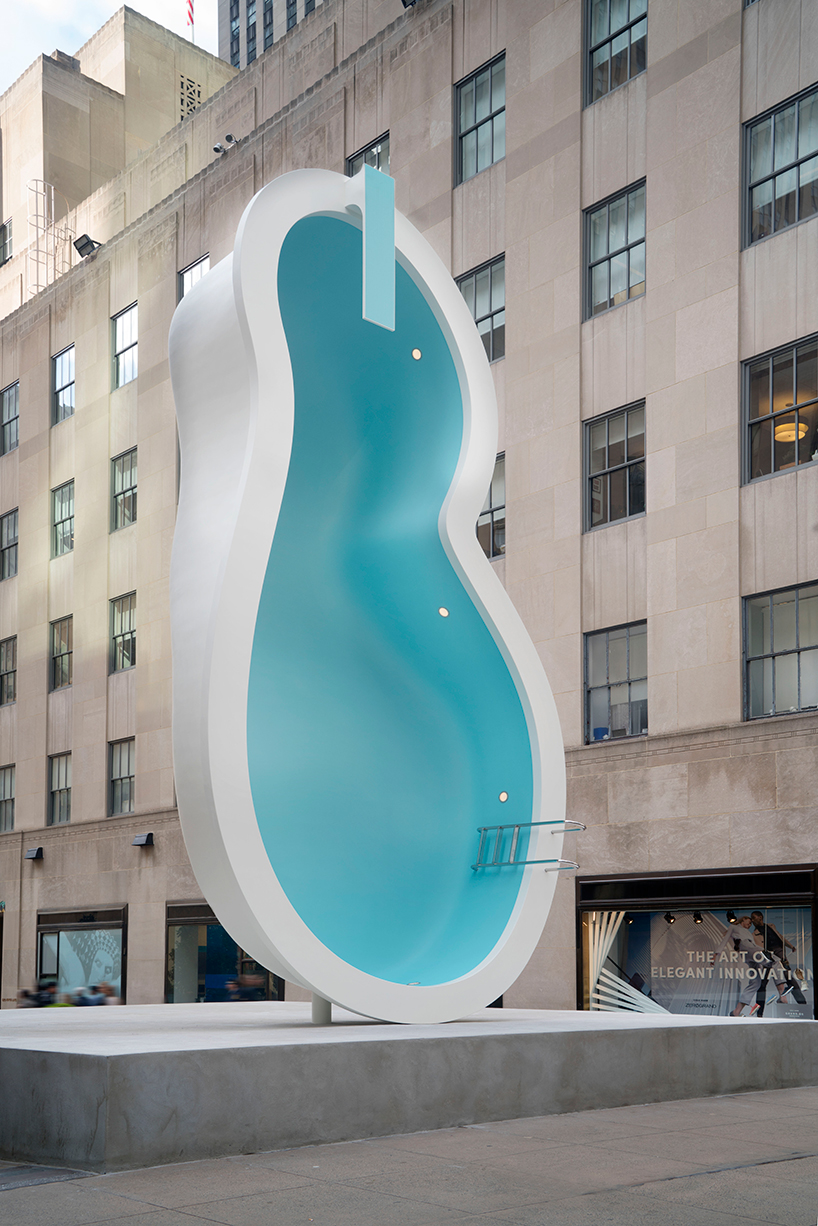 a cyan blue interior, polished stainless steel ladder, bright lights, and a diving board are featured throughout
image by guillaume ziccarelli

DB: you’ve also used the theme of swimming pools in some of your previous works — what attracts you to this motif? is it a symbol for something?

E&D: yes, we’ve used pool and diving board motifs in several of our past works, including at the venice biennale in 2009, in which we showed a figure of a dead art collector floating face-down in a swimming pool, and in our 1997 sculpture of a diving board penetrating a window, installed at the louisiana museum of modern art in humlebæk, denmark. we’ve been inspired in part by david hockney’s paintings of swimming pools and ed ruscha’s photos, and our ongoing fascination with this subject might come from the lack of these sorts of pools in our scandinavian upbringings. it’s more of an adopted ‘american dream.’ and a swimming pool is something that you can relate to directly in a bodily, almost sexual way. 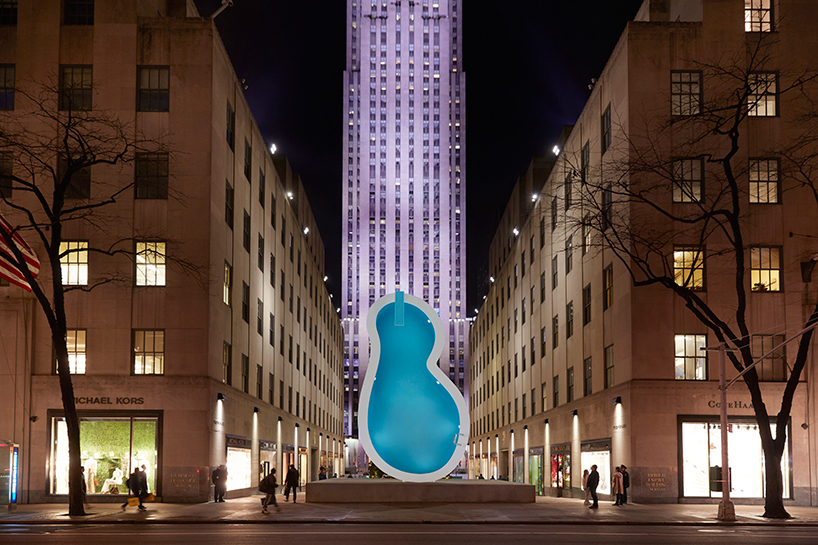 the sculptural details become particularly evident as they are isolated vertically and above ground
image by jason wyche / courtesy public art fund, NY

DB: much of your work is presented in the public realm. do you enjoy this direct engagement with a broader audience who are not necessarily art enthusiasts?

E&D: experiencing art should not be limited only to those who visit museums, galleries, or art fairs. it is challenging for you as an artist to work in public space in many ways, but you always get a lot of surprising reactions, which makes it fun.