‘weaving walls’ is a public art installation developed by entropika design lab for the 6th folkowe inspiracje festival in łódź, poland. the design celebrates the historic textile tradition of łódź, and aims to transform it into a contemporary, visual language in conversation with the urban landscape. the lab’s intention is to tell a new urban story by drawing parallels between architectural exteriors and the inherent art of traditional textiles, weaving a new delicate skin on the façade of a building. 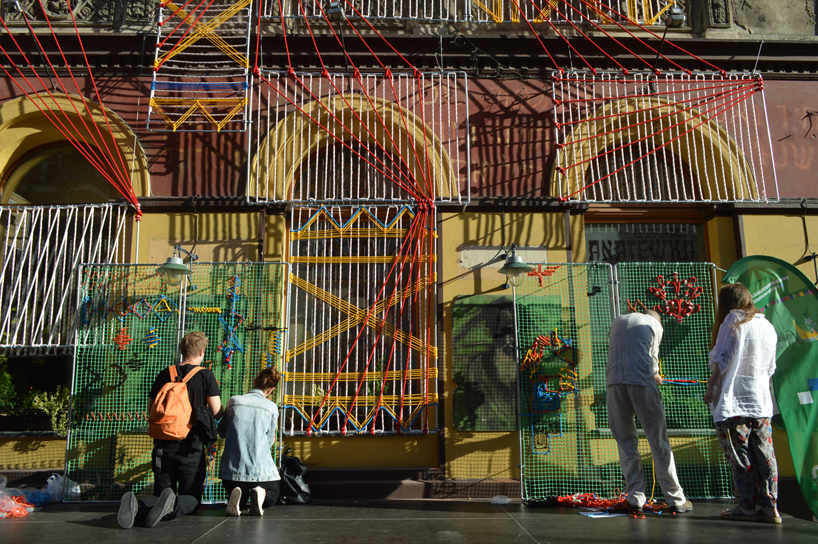 over the past decade, the steady decline of the textile industry in łódź has brought about the parallel decline of many of the city’s local economies. the resulting downturn has had lasting effects on both the societal and urban fabrics of the city. entropika’s installation explores this relationship between the deteriorating architecture and its past, attempting to reforge a connection between the city and its cultural history by literally sewing the wounds back together — a colorful, cultural, and emotional method of social healing. 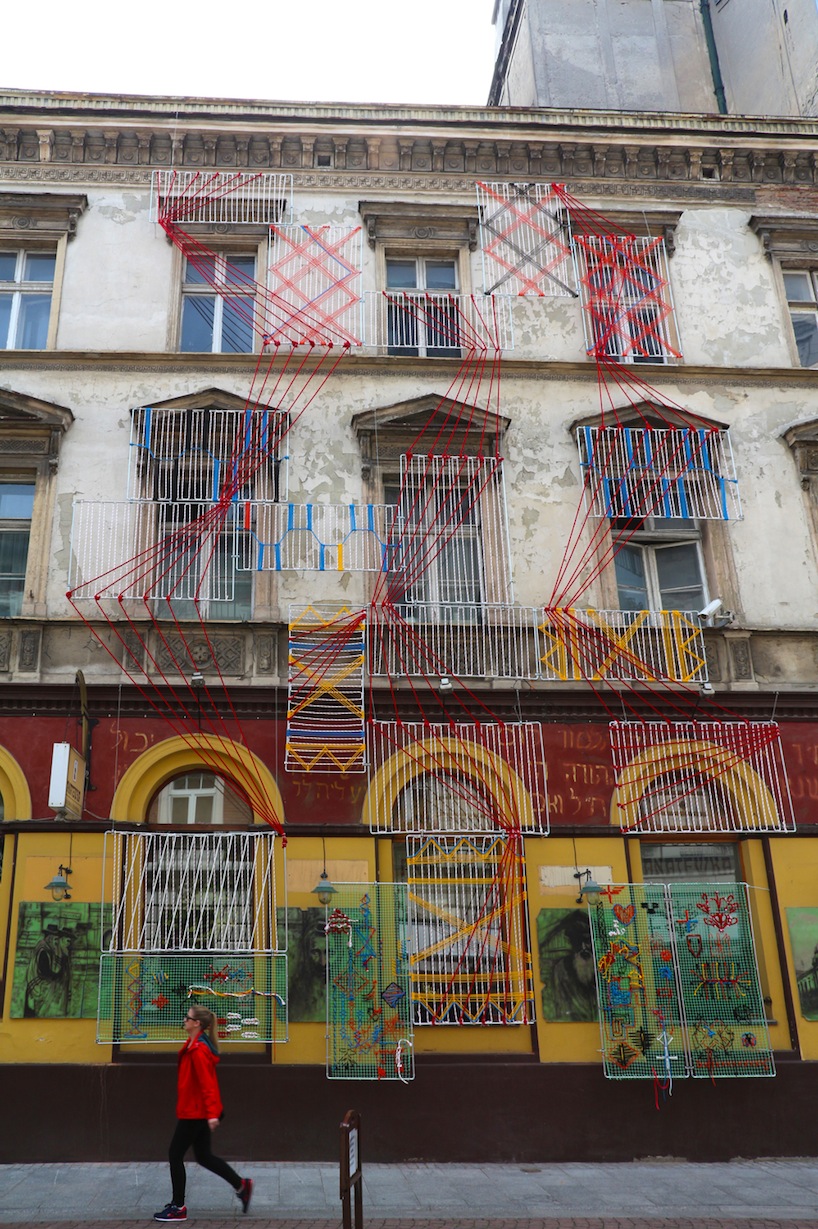 the history of the building is clearly evident on its facade. the looms form a fresh, contemporary layer

‘weaving walls’ casts a fresh light on the city’s mixed landscape of abandoned buildings, housing estates, worksites, lying between disuse and renovation, creating space for inhabitants to thoughtfully engage with the future of łódź. in executing the project, the lab used around two kilometers of acrylic ropes, hand-tied and hand-woven on twenty-two aluminum frames. the composition is structured on a model that refers to a stylized loom; the warp is represented by white and red-dotted ropes, while the colored ropes play the role of the weft. the looms delicately overlay on the building façade, while sets of striking red ropes connect them into the abstract, visual synthesis of the installation. the artwork also served as backdrop for some of the festival activities, including a two-days participatory workshop in which passersby were invited to get inspired by traditional embroidery and create their own personal patterns. 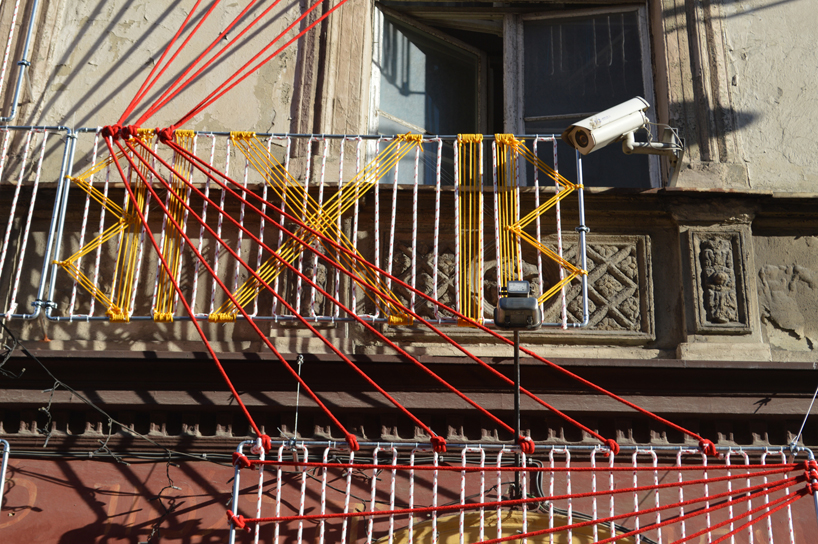 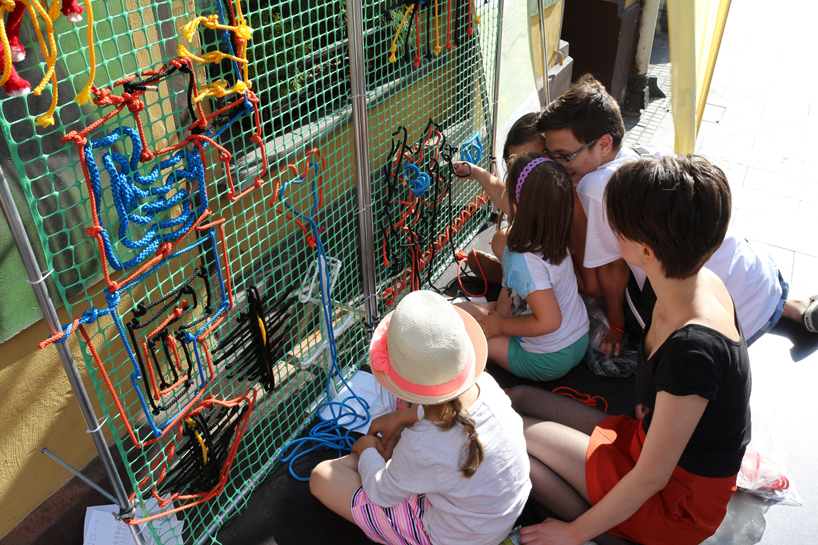 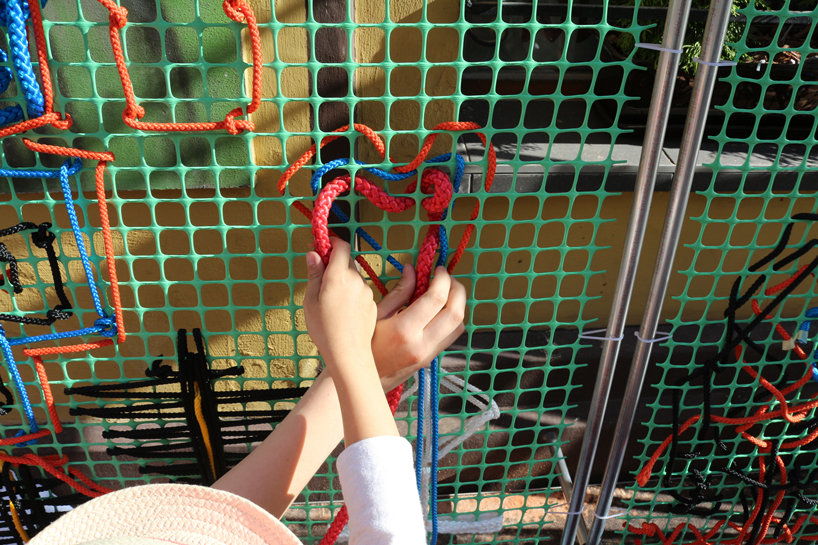 the framework mimics that of a traditional loom 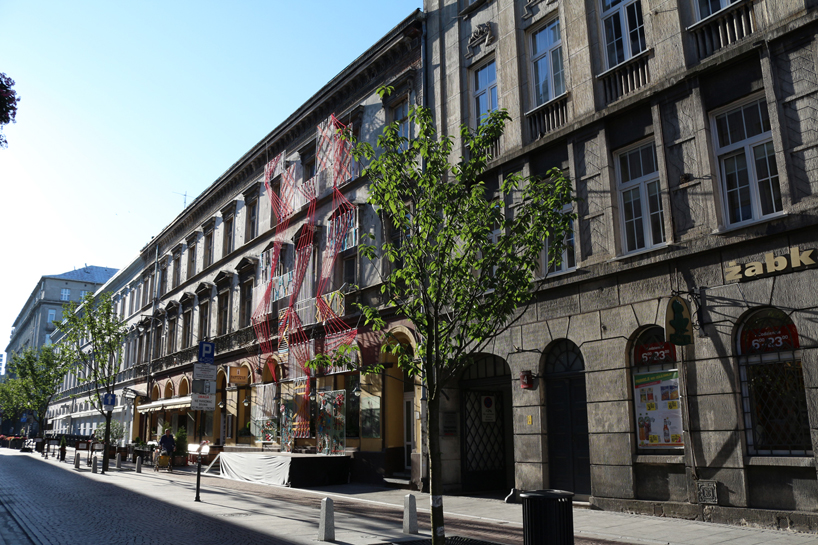 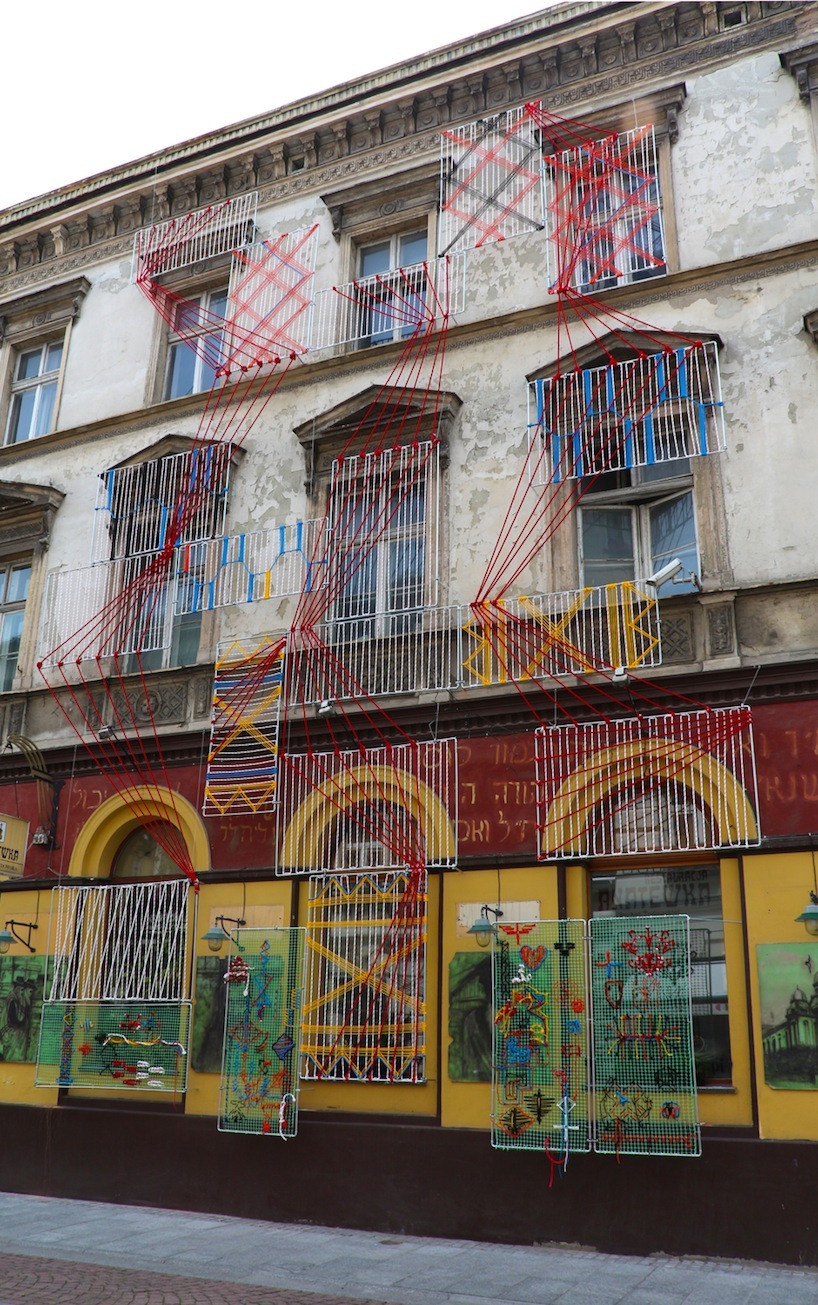 much of the patterns woven have traditional, folkloric relevance 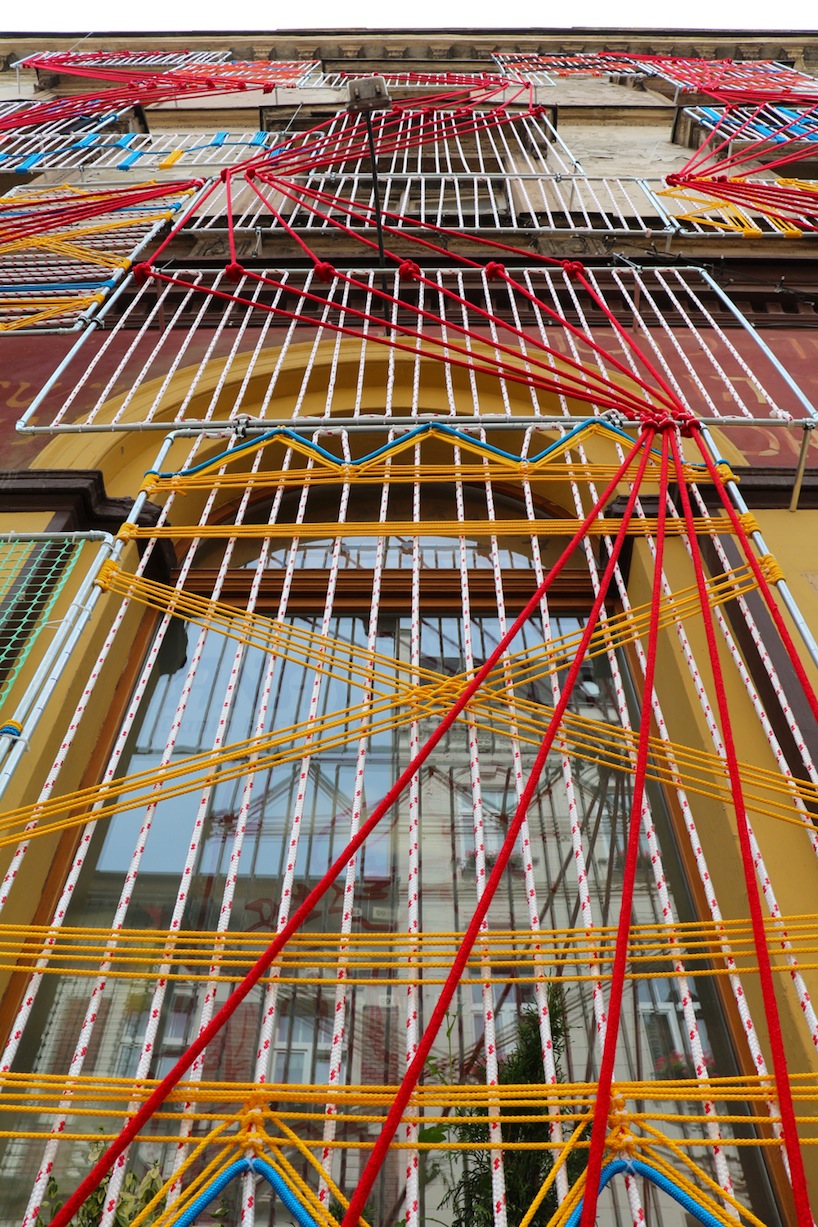 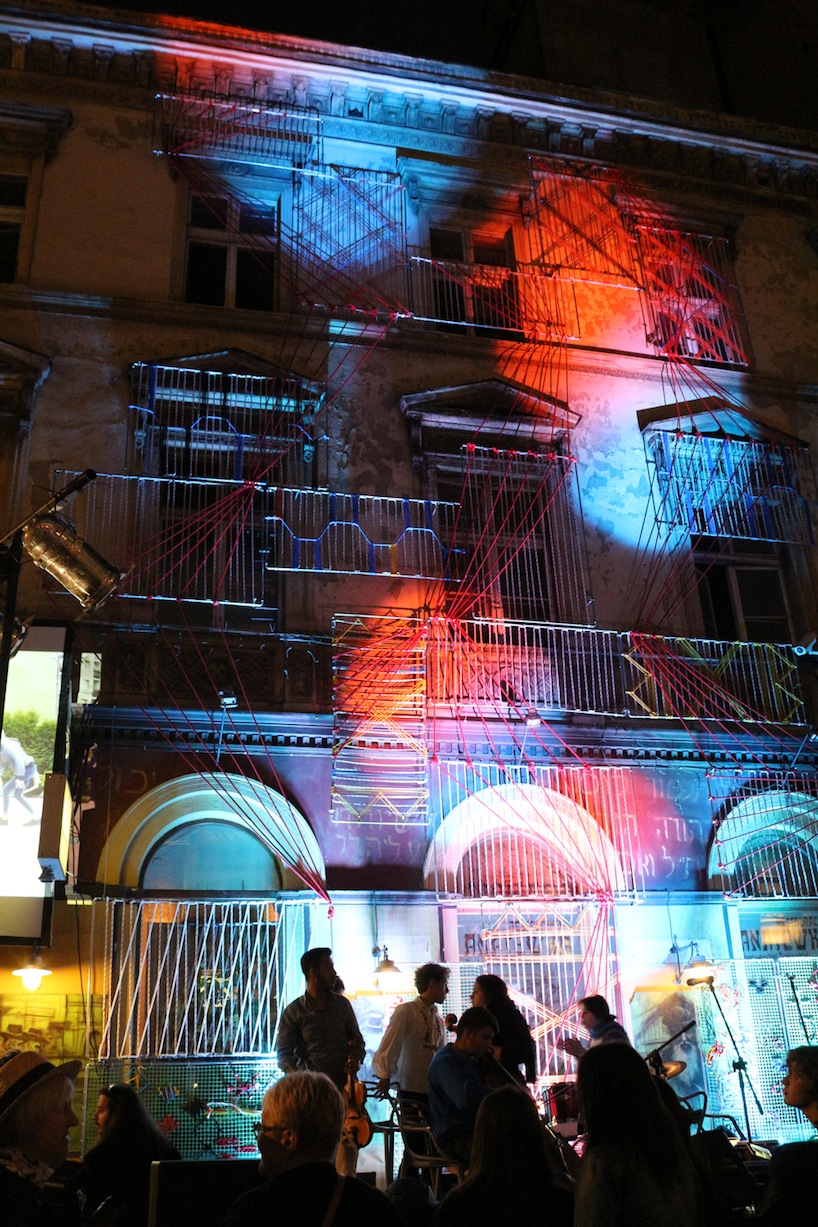 the project is developed as part of the 6th folkowe inspiracje festival in łódź, poland 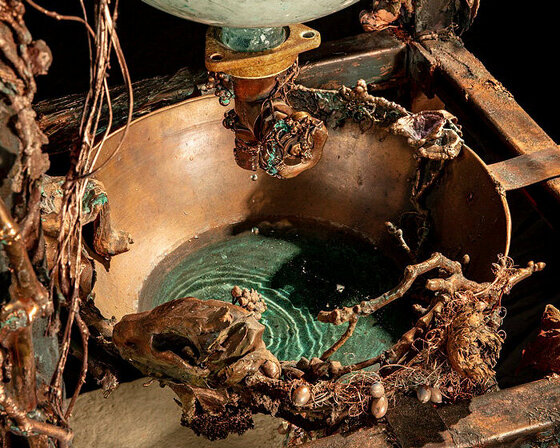 Feb 02, 2023
now complete: anish kapoor's newest 'bean' nestles into the streets of new york
the new 'bean' is snugly squeezed beneath the cantilevering slabs of the 'jenga building' in tribeca.
art
406 shares
connections: +1370
'we are nature' - interview with brazilian artist ernesto neto ahead of engadin art talks
designboom speaks with ernesto neto about hope, spirituality and nature ahead of his participation at this year's engadin art talks.
art
269 shares
connections: +120