on april 9, 1973, the new headquarters of galleria milano was inaugurated by carla pellegrini with a personal exhibition dedicated to one of the greatest italian artists and designers, enzo mari. the exhibition in milan was entitled ‘falce e martello. tre dei modi con cui un artista può contribuire alla lotta di classe’ (sickle and hammer. three of the ways an artist can contribute to the class struggle).

almost fifty years later, a faithful reproduction of the same exhibition is presented from september 30, 2020 – january 16, 2021, philologically reconstructed thanks to research from the archives of galleria milano and enzo mari. in the abyss that separates the perception of the symbol of the sickle and hammer from the 1970s to the present day, and through the vision of an enlightened author like mari, it becomes possible to trace a significant change in society and the cultural fabric. we invite you to visit this remarkable show! 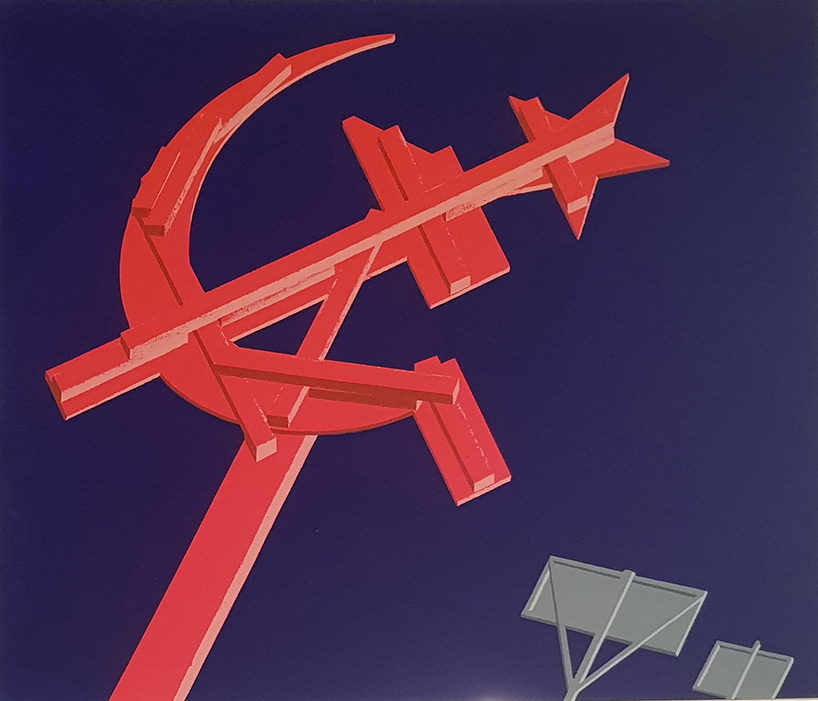 I have collaborated with enzo mari for over 20 years, and was given by him somehow the responsibility to at least try to document his knowledge he shared with me. ‘birgit, in sympathy, I pass the baton (underlined)’, wrote mari (to me) in may 1987. so I ‘abuse’ the power of ‘publishing for the masses’ to illustrate his work in an in-depth manner. here, to do so, I also partially quote from the essay in the exhibition catalogue by bianca trevisan. yes, it is an overly long article — that’s now something for the ‘nerds’ of art and design…

…and related to the ‘hammer and sickle’ theme, enzo mari said:

artistic activity may be considered objectively if it involves the notions of research and planning.

by research are meant those operations that are able to verify perceptual phenomena and pick out and experiment their dooms. research is carried out by submitting both intuitive and rational elements to an assessment having the form of an analysis of determinate variations programmed in a series of originally parallel comparison models.

by planning are meant those operations carried out to realize what is considered to have priority. planning is put into effect, by means of the co-ordination of appropriate techniques, by progressively singling out what has priority within the framework of everything that influences the determination of a process.

periods of research and planning are always correlated: the former demands constant planning, the latter constant verification. in any case, theory is always proceeded by experience and such activities can only be acquired by effective practical work. thus they participate in the process of historical becoming, thus they cannot avoid tackling new problems and can only put the culture currently in force into a state of crisis.

enzo mari, allegoria studio per l’anniversario, 1954–1972, wooden structure, 208 x 168 x 55 cm.
here seen in the main room of the exhibition at galleria milano in 1973 and in the studio of enzo mari
photos by carla and nicola pellegrini

in the exhibition at galleria milano we see a reproduction of giotto’s cross. next to it, a large wooden sculpture of the hammer and sickle painted red, in succession, we see a real hammer and sickle — the object itself — meaningfully placed side by side with the symbol, designed by him but defined as ‘not entirely satisfying’.

‘studio per l’anniversario’ is an elaboration of what enzo mari refers to as a ‘gothic crucifix hanging in mid-air in one of giotto’s frescoes seen from behind’. a detail portrayed in the thirteenth of the twenty-eight scenes from the ‘life of st francis’ depicted by giotto in the basilica superiore in assisi. the scene in question, titled ‘the crib at greccio’ and produced between 1295 and 1299, is an extraordinary example of three-dimensional rendering and late-medieval realism. 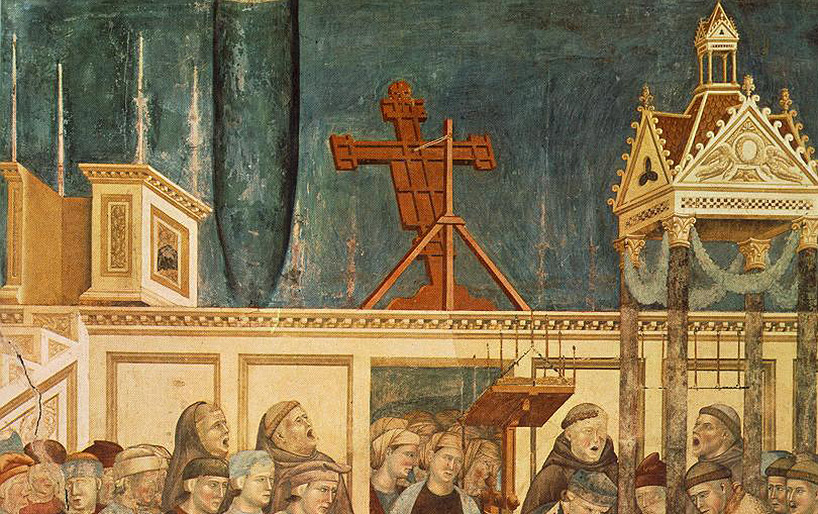 detail of ‘the crib at greccio’ by giotto in the basilica superiore in assisi, 1295-1299

mari focuses on the wooden cross, seen from behind along with its supporting woodwork. the detail is profoundly re-elaborated: the perspective is dilated, the mismatching planes — reappraising everything, even the reinforcing frame of the crucifix which is represented on the back of it, bottom right in the tempera image — deploying the transformation of the cross into a hammer and sickle. like the cross, the hammer and sickle symbol is endowed with the fundamental requisites for an effective symbol, one lasting over time — i.e. its ‘property of being recognized ‘homogeneously’ and ‘property of being easily reproduced’.

in other words, a symbol that does not call for lexical superstructures: it means what it is…
in mari’s own words, the ‘breaking down and modular re-organisation of images’ are at the root of his body of work and his outlook on the world. at the time, enzo mari had already long been a designer of clear fame, but his career did not take him away from his political commitments: a constant element found in the majority of his work. the symbolism of the hammer and sickle also returns in later work (among the many elements examined in the ‘atlante secondo lenin’ (atlas according to lenin), developed in 1974; in ‘quarantaquattro valutazioni’ (44 evaluations), a work presented in 1978 at the venice biennale (XXXVIII international art exhibition); in ‘allegoria della morte’ (allegory of death) presented in 1987. 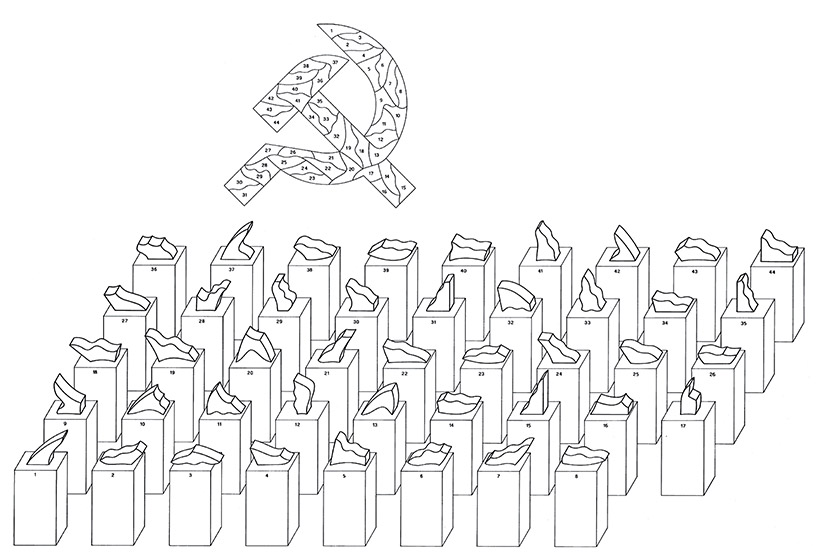 the first edition of ‘quarantaquattro valutazioni‘ comprises 44 wooden sculptures of similar but not identical shapes, which together constitute one huge hammer and sickle, and from a lithography that illustrates the forty-four numbered parts pieced together, like a puzzle. each number corresponds to a title, which in actual fact is a line from a poem written especially for the occasion by francesco leonetti, and a price tag.

the prices are provocatively different from one another, and the single objects, once placed on individual pedestals, become aesthetically pleasing. (the authors openly quote hans arp) thus reduced to pure exhibitive value, as if to say: ‘the object appears to be sale-able if the ideology is not apparent, if it looks ‘nice’, if it has varying prices’. 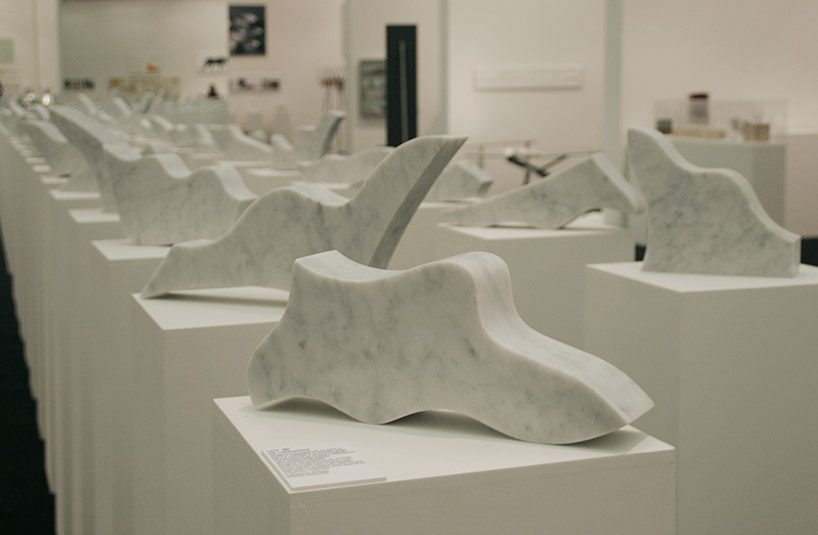 enzo mari, quarantaquattro valutazioni (44 evaluations) / a second edition on the theme with 44 marble sculptures that can be recomposed into the sickle and hammer motif , from the exhibition ‘l’arte del design’ (the art of design), gallery of modern and contemporary art (GAM) in turin, october 29, 2008 to january 6, 2009. see our article here.
image © designboom 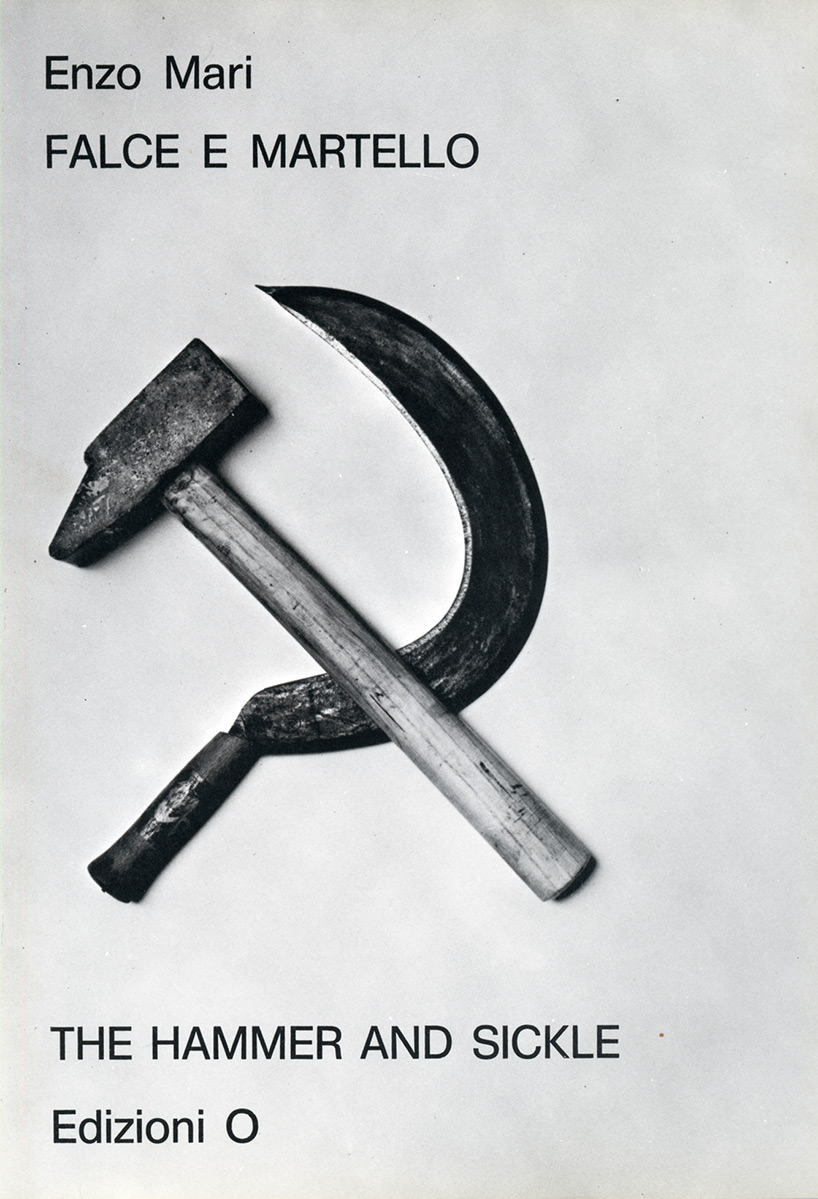 the early exhibition in 1973 was introduced by the booklet issued by edizioni O, slim, minimal, in an almost pocket-sized format: sixteen pages in black and white plus a cover, featuring a text penned by mari, fundamental for framing the stance of the aesthetic agent (i.e. the artist) within the class struggle.

the main point he made was that the artist must be capable of speaking to everyone, going beyond the original sin of romanticism ‘of the myth of one’s own ability to express oneself’ by deploying four kinds of behavior: adopting coherent attitudes by addressing the actual interlocutors; privileging languages already known in traditional poetics; constantly questioning the functionality of the object; and lastly, being able to mediate one’s own technical skill.

a question concerns the effectiveness of communication: ‘does form correspond to function?’

… and what remains after the death of ideologies?

the ‘allegoria della morte’ comprises three similar gravestones with three corresponding burials bear three engraved symbols – the hammer and sickle, the swastika and the cross (giotto’s crucifix returns once more). in his own words, ‘the tombstones are engraved with the symbols of the three main religions present today: a cross that alludes to all the monotheistic religions; a hammer and sickle that alludes to the lay ‘religion’; a swastika that alludes to the ‘religion’ of goods, suggested by a dozen models of toy cars parking on it’. 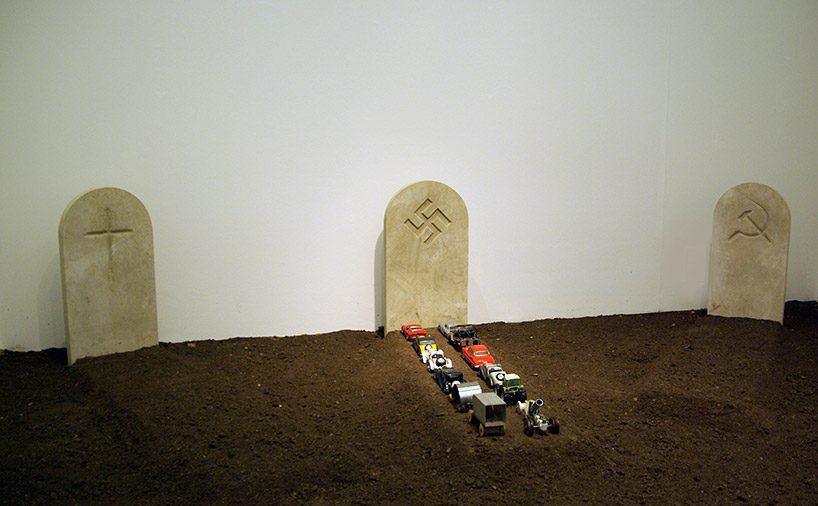 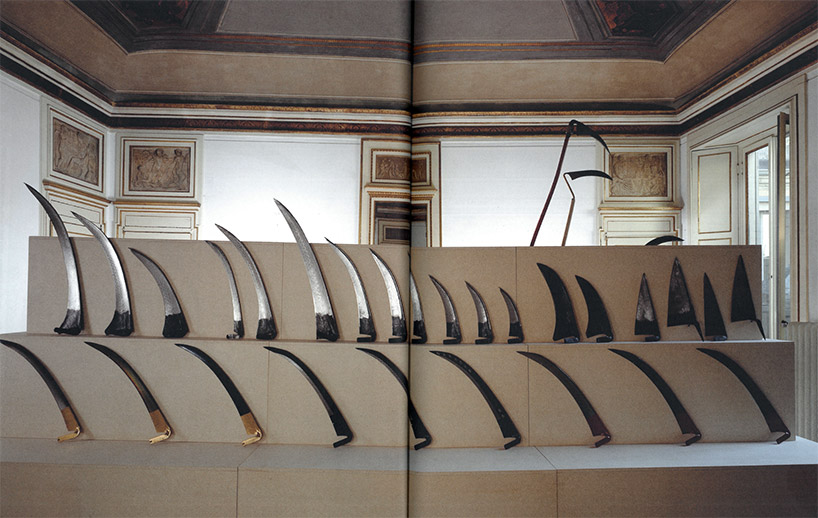 … and in 1989 at the galleria danese in milan, mari presented ‘perché una mostra di falci?’. an exhibition of sickles? ‘yes, because they’re beautiful’ (enzo mari). sickles without hammers — in this project, he points out that symbolic functions are no longer implied, but rather a ‘model for our living.’ once again, a model with the tenacious ambition to change things and get to the real needs of people.

a utopian model?
maybe, but a necessary one: ‘please do not respond with the usual obvious sociological comments on our affluent society: I know them full well, and I’m telling you that it must be changed’ (enzo mari), despite everything. 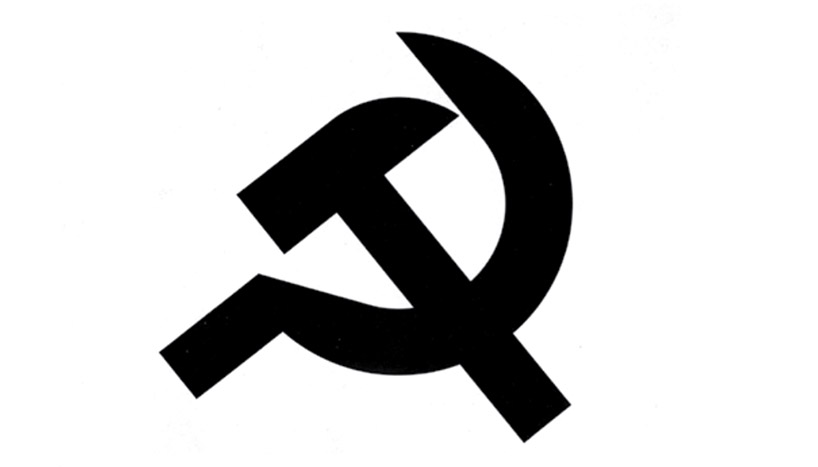 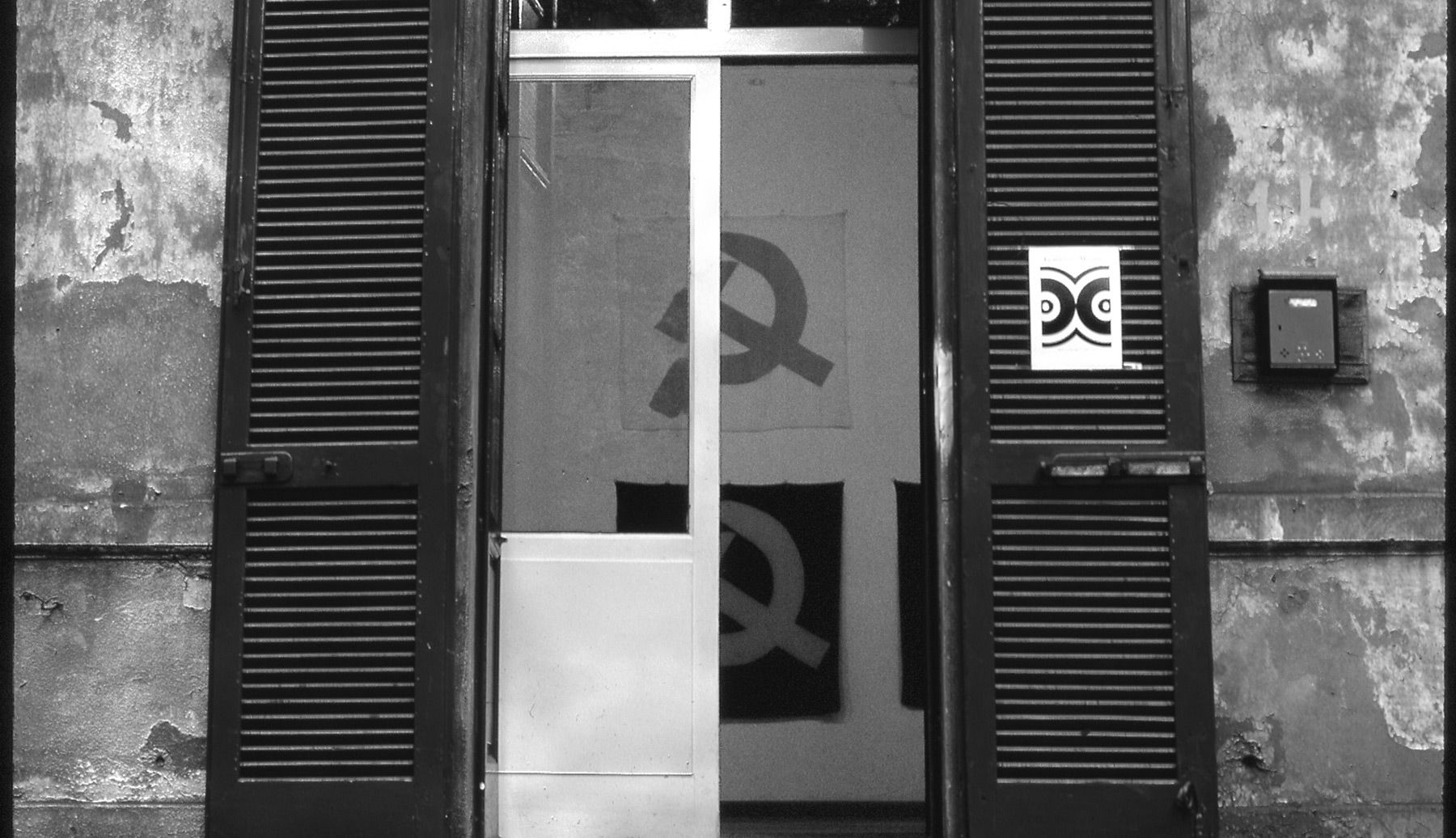 the works on display in the exhibition at galleria milano all depict the hammer and sickle, including two individual objects of use; the symbol designed in the studio; a large wooden sculpture; silk-screened wool flags in different colors; a lithography reproducing the research with 168 symbols; and a silkscreen in two colors. these last three elements were included together with a small publication in a folder published by edizioni O, the publishing house of galleria milano founded by baldo pellegrini, carla’s husband.

‘this remake of mari’s installation cannot be considered a mere copy of the original exhibition, but the original exhibition itself,’ writes nicola pellegrini, daughter of carla pellegrini. ‘not only are the works mounted exactly as they were then, but also the space that contains them is exactly the same. only the air has changed, like the water in heraclitus’ river, which is different every time we dip a toe into it.’ 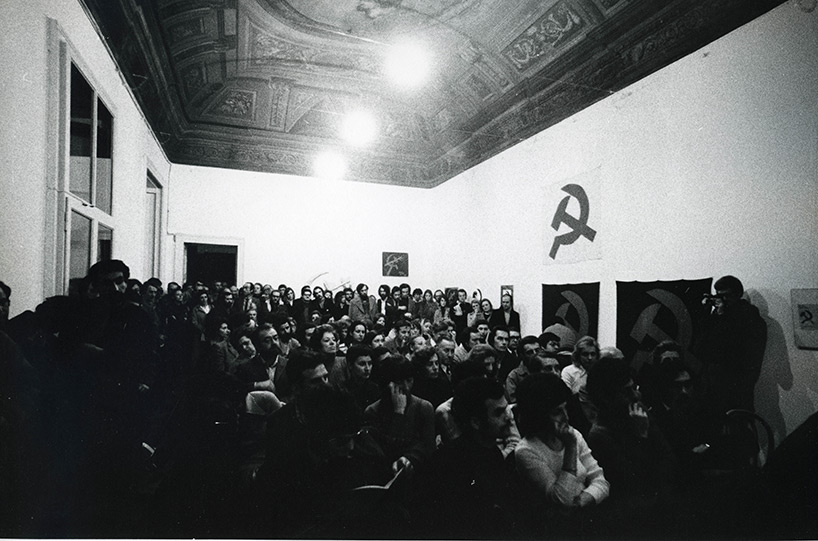 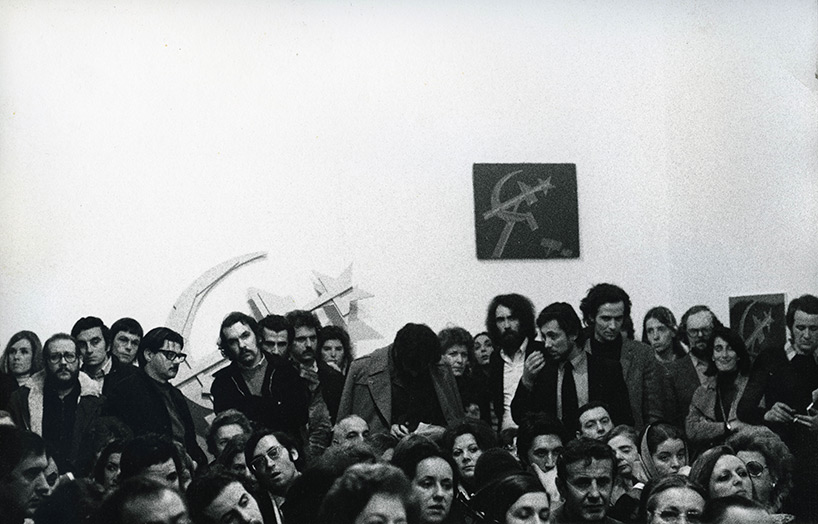 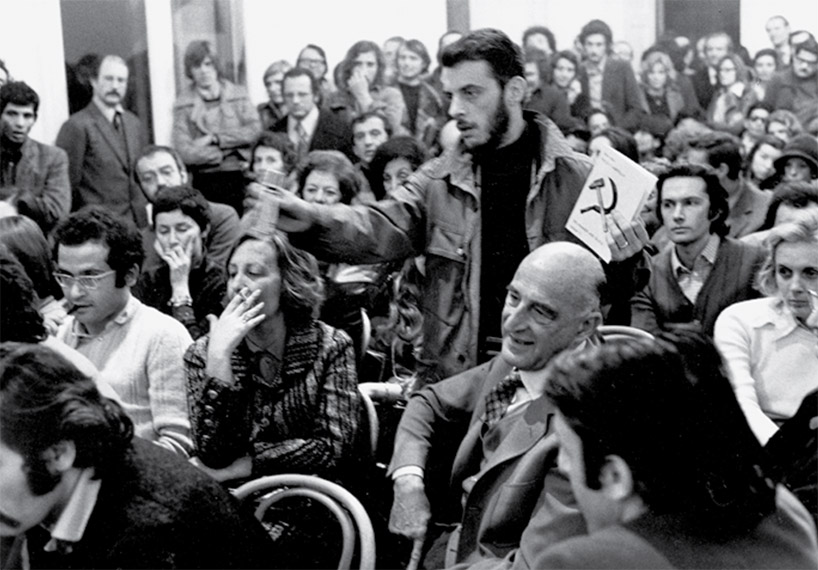 the exhibition is accompanied by a volume published by humboldt books, and reproduces the 1973 catalog, along with a rich selection of archival materials that reflect the sentiment of the time: photographs, projects, press reviews and various ephemera. an essay by bianca trevisan philologically reconstructs the process underlying the project by enzo mari, bringing to light still little-studied aspects of his work, while a text by riccardo venturi weaves a multifaceted narrative full of heterogeneous citations.

enzo mari
was born in novara in 1932. he attended the brera academy of fine arts and dedicated himself to exploring the psychology of vision and design methods. he is an impassioned humanist with an unusual ability to combine idea and form, with particular attention to social and political problems. mari is radical in his ideas and subtle in his designs. a non-conformist that tries to introduce a certain amount of utopia in every of his projects.

Jun 19, 2022
adam parker smith employs digital and physical techniques to craft sculptural series 'crush'
the carrara marble sculptures are an uncanny vision of the classical canon, as if it were run through a trash compactor.
art
539 shares
connections: +380