in the small spanish town of blanca, a striking white fabric can be seen gently draping and warping through the landscape. this unusual sighting is the EPHEMERAL installation set up by a group of 20 international participants, as part of a three-days intensive field work for the ‘spatial transformation workshop — blanca back to life’. designed by architect pier alessio rizzardi from TCA think tank, EPHEMERAL is an experimental approach aimed at understanding the current conditions of the town through artistic means. 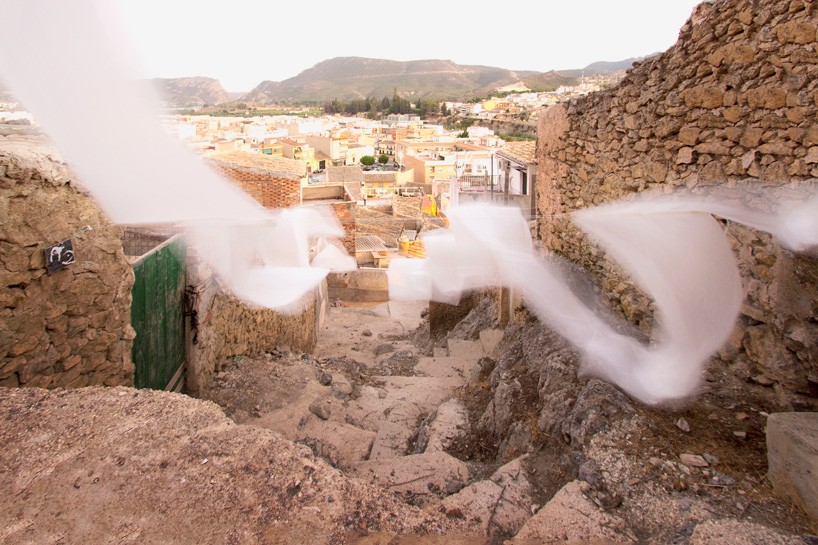 the white textile warping through the ruins of blanca

TCA think tank has been invited to the ‘spatial transformation workshop — blanca back to life‘ which was organized by AADK spain centro negra. curators lorenza manfredi and abraham hurtado, alognside students and professionals from spain, italy, germany, norway, india and czech republic, have also been involved in the development of the project. 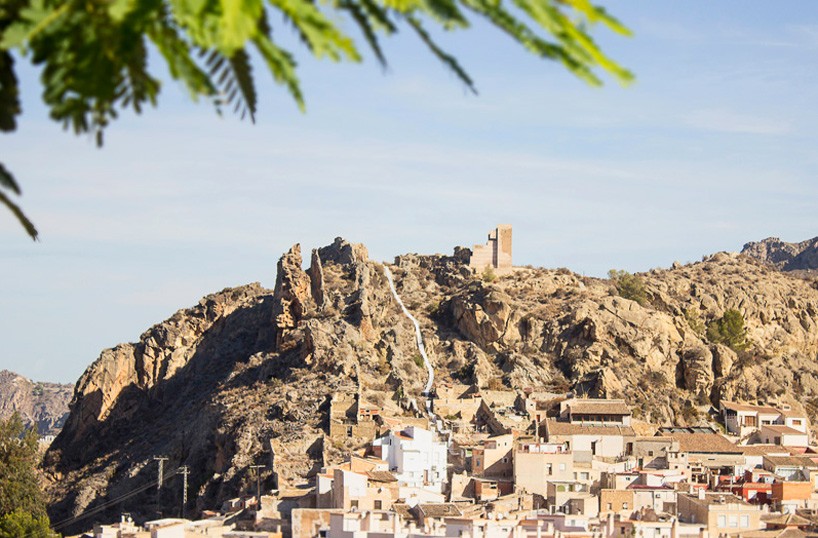 sitting at the foot of the volcanic peña negra rock, the town of blanca is characterised as a ‘shrinking city’. indeed, many settlements, once used for raising poultry and husbandry, now sit abandoned in ruins and are found in a state of decay or reconstruction; those informal architectures have served  for a long time as a ‘susbsidence city’ — in other words, a sunken urban fabric. therefore, the 20 participants gathered at centro negra and joined forces to re-evaluate the abandoned areas as well as ‘rediscover the actual potentials of a shrinking city’, as expressed by the team. 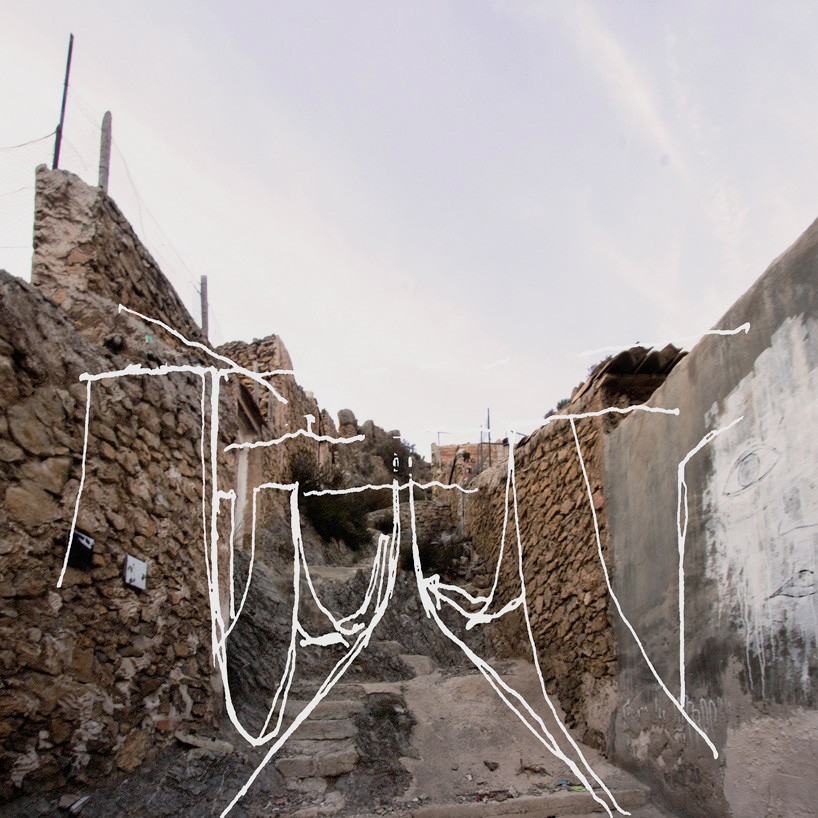 the EPHEMERAL installation passes through different areas, starting at the top of the mountain and snaking its way down in-between the ruins. like a carpet, the white textile is unrolled unto the steep terrain, traveling across narrow alleys and wider lands — creating a surprising series of forms in the arid landscape. playing with the concept of scale, the team folded the fabric in ways to create different sizes; wider folds allow for larger groups of people to gather and interact; smaller folds offer more solitary and intimate experiences of the artwork.

‘the place is to be explored, observed and attracted to. the installation is to be examined from various viewpoints around the valley, from the other side of the mountain and from the main square of the village’, as explained by the team.

transitioning between different sizes and spaces, the white fabric is introducing new dynamics by reanimating the place and filling it with movement. it finally ends by joining all elements into one section that rises above the abandoned structures; this is done with helium balloons that suspend the white fabric. one the most important aspects of this project is its participatory dimension, where designers and users both contribute to the artwork. in other words, locals and visitors can modify the height and configuration of the installation by adding or shuffling elements on site. 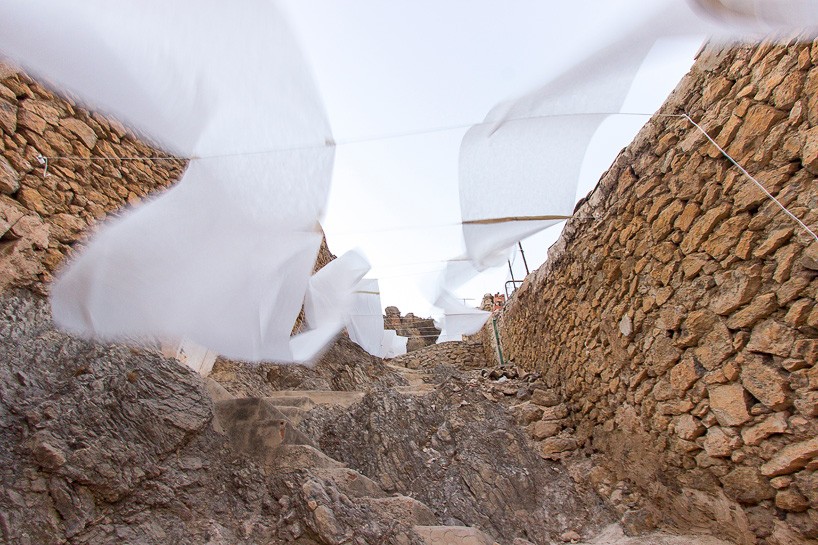 dynamism introduced into a stagnant space 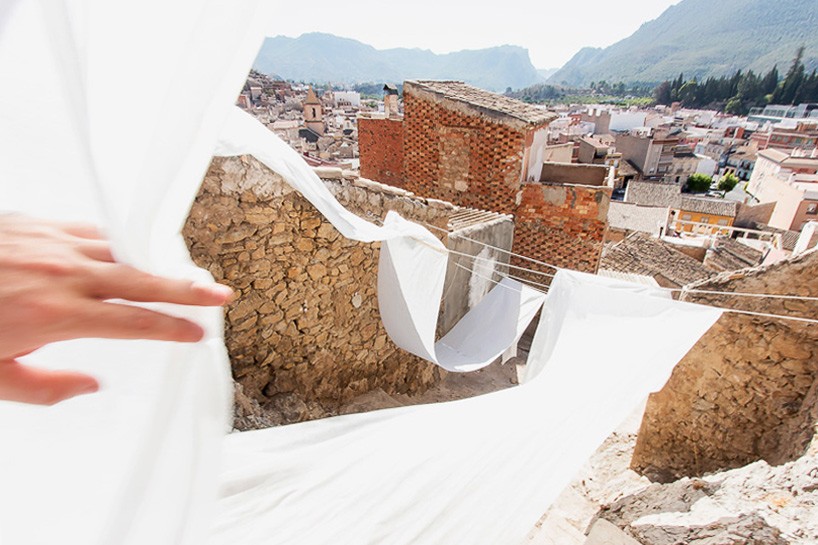 once close enough, the physical connection appears — with folds, stairs, doors, walls and alleyways to pass through 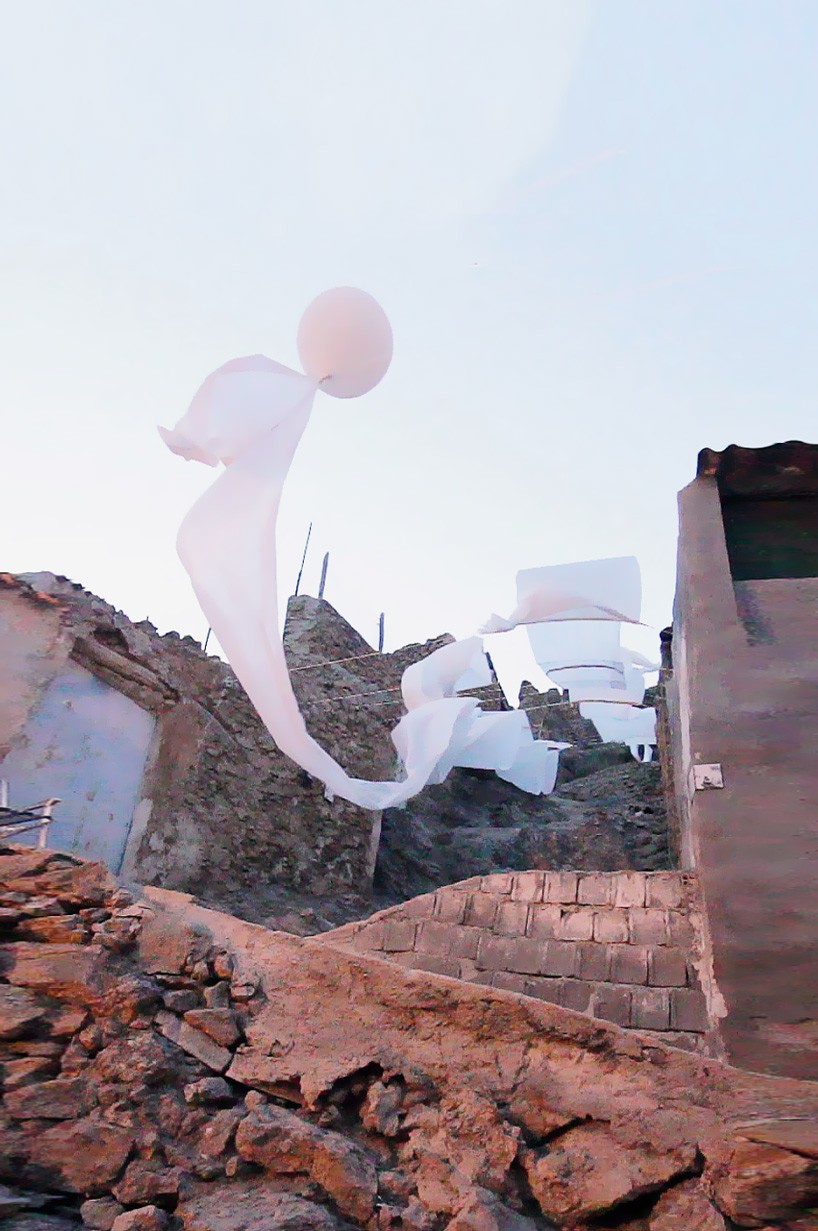 at some point, the textile is seen floating above people’s head, creating spatial continuity and contemplation 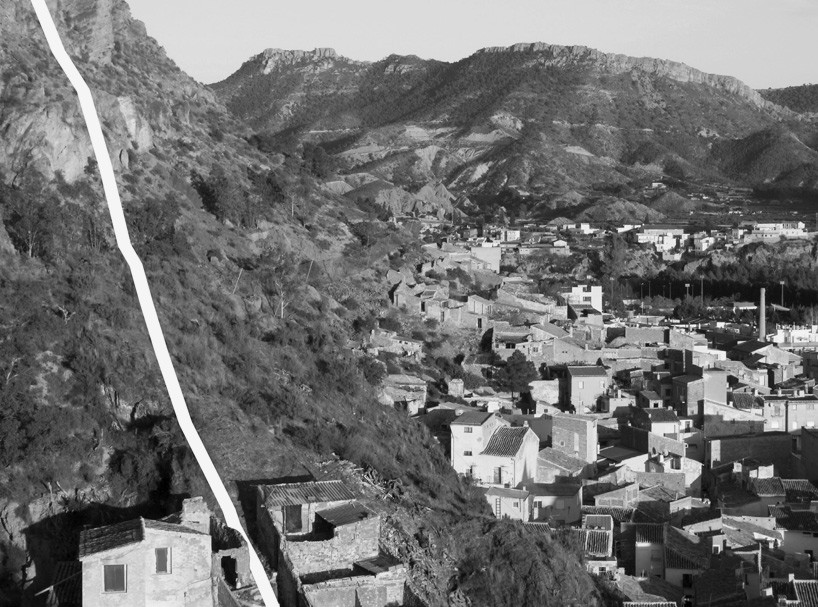 concept phase: a cohesive, single line that travels through the topography — creating a binding effect 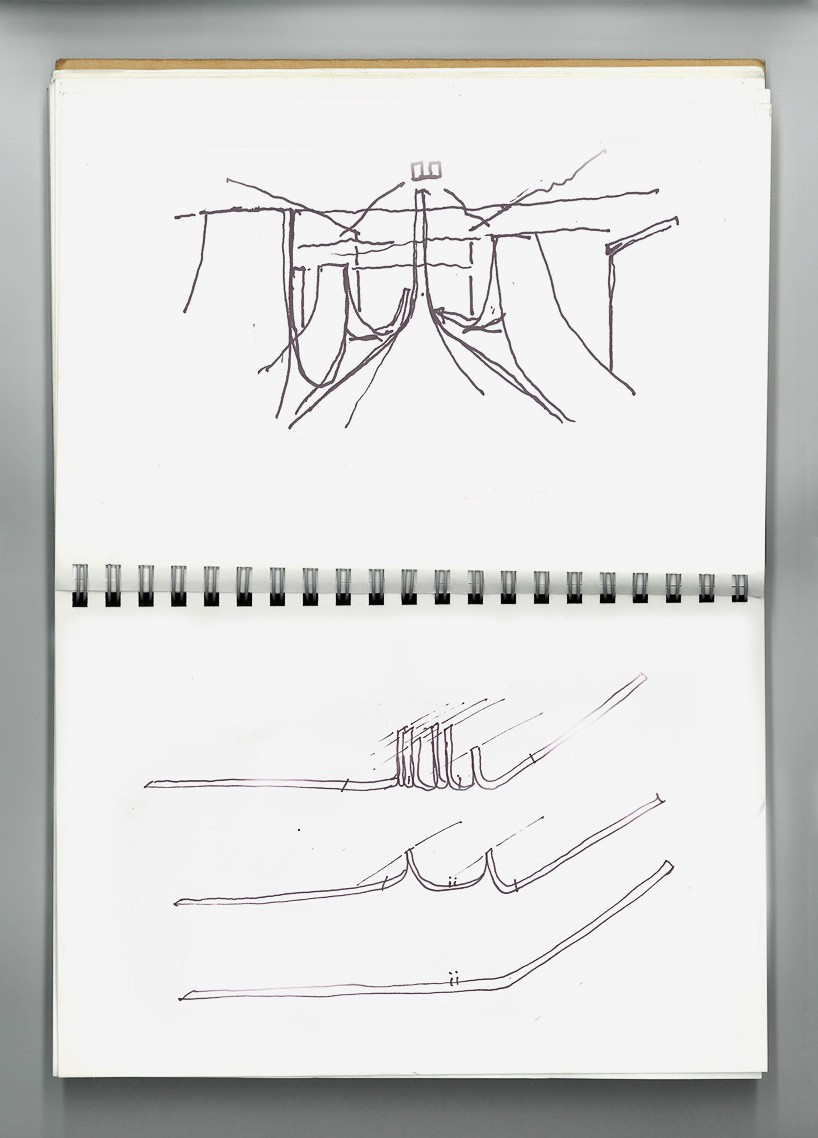 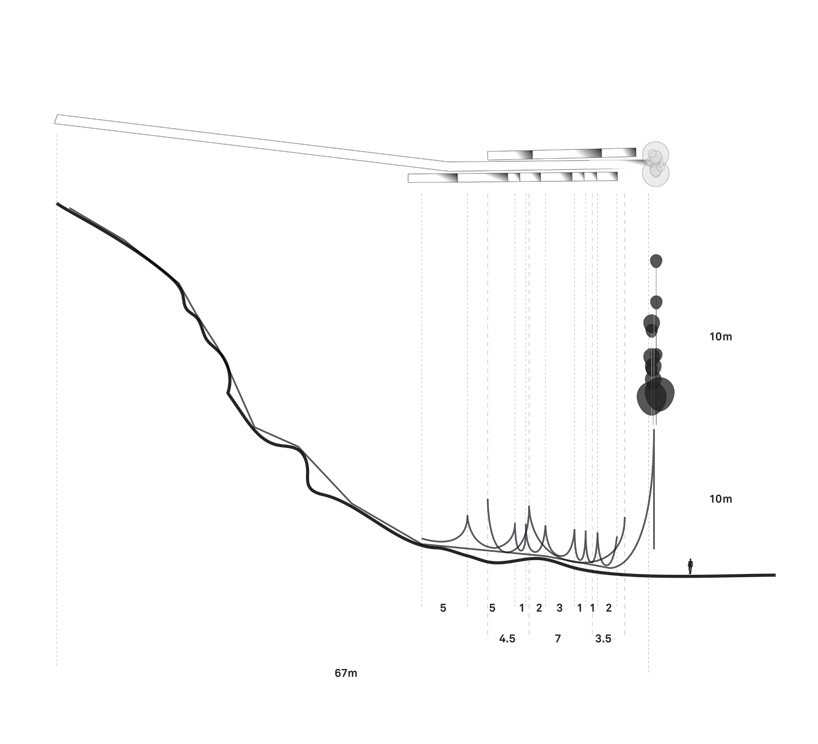 plan and section of the installation 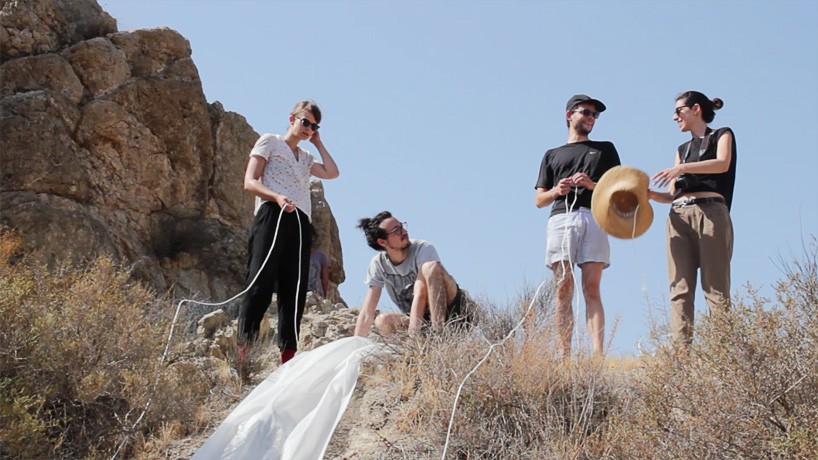 construction phase: the team at work 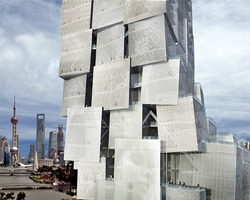 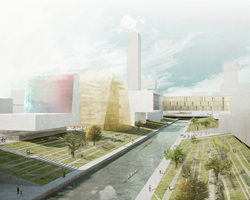