in an effort to describe the increasing street and sexual harassment women face in egypt, two female filmmakers based in cairo have documented this experience in ‘creepers on the bridge’. colette ghunim and tinne van loon secretly filmed the stares they received on a walk across across the qasr al nile bridge, described by the documentarists as ‘one of the places where it is the most intimidating to walk alone as a woman’. the video follows point-of-view footage, emphasizing — from their own vantage point — the feeling of being objectified in the streets.

the women want to turn the short movie — which you can see below — into a full documentary about sexual harassment in egypt titled ‘the people’s girls’ and are currently seeking funding on kickstarter. 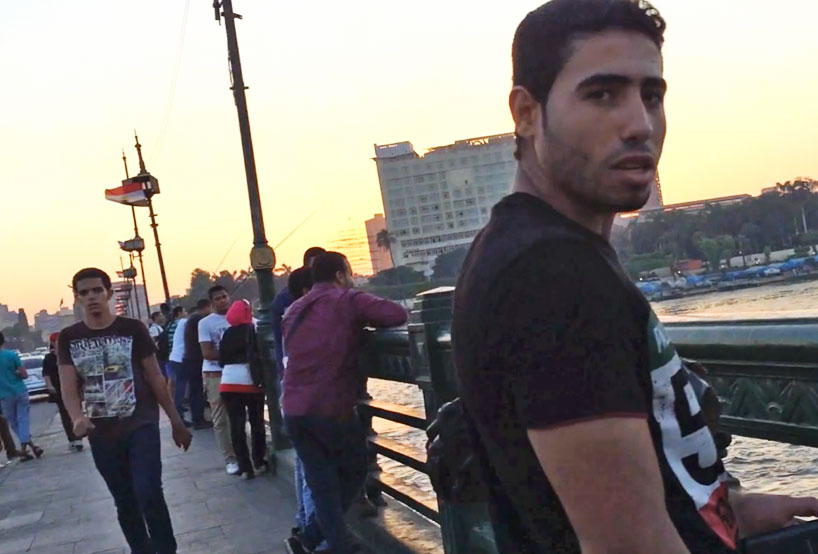 answering the question ‘why is this issue important?‘, the filmmakers say: sexual harassment has been a growing problem in egypt over the last couple of years, especially in cairo. UN women reported last year that over 99% of egyptian women have suffered from sexual harassment in their lifetime, and about half of all women report facing harassment on a daily basis. the thomson reuters foundation also recently named egypt the worst country for women in the arab world. our half hour film documents three people with different views of sexual harassment and their daily lives surrounding the issue. because patriarchal societies often overlook women’s rights violations, this documentary serves as a catalyst for public debate not only in egypt but internationally, as prominent cases of sexual harassment frequently occur on a global scale.

creepers on the bridge
video courtesy of tinne van loon

the half hour documentary film will consist of three narratives: esraa, an activist against sexual harassment, abdullah, a tuk-tuk driver, and an egyptian lawyer. esraa is a 26 year old egyptian woman, who challenges social norms by performing in storytelling theater pieces about sexual harassment, as well as participating in anti-sexual harassment protests and events. abdullah is a 28 year old tuk tuk driver from a working class neighborhood in cairo. as 8 out of 10 women experience sexual harassment in public transportation, the filmmakers will observe daily life in the city through his eyes, and get his social circle’s perspective on the issue. the third character would be an egyptian lawyer at a prominent women’s rights organization, and will document her work on a court cases where she defends a victim of sexual harassment. take a look at the teaser video below for a glimpse of the documentary.