the creative spirit of the democratic republic of the congo is celebrated in a special exhibition hosted at the fondation cartier in paris. curated by andré magnin, ‘beauté congo – 1926-2015 – congo kitoko’ highlights the birth of modern painting practices in the african nation beginning in the 1920s, and traces almost a century of the country’s artistic production. while the focus is on painting, the show also includes comics, music, photography and sculpture, offering the public a unique opportunity in which to discover and experience the diverse and vibrant art scene of the region. in the mid-1920s, when the congo was still a belgian colony, precursors such as albert and antoinette lubacki, and djilatendo painted the first known congolese works on paper, opening the door to the modern and contemporary art scene in the country. figurative and geometric in style, their works depicted village life, the natural world, dreams and legends expressed with great poetry and imagination. following world war II, french painter pierre romain-desfossés moved to the congo and established an art workshop called atelier du hangar, where until his death in 1954, painters such as bela sar, mwenze kibwanga and pili pili mulongoy learned to freely exercise their imaginations, creating colorful and enchanting works in their own inventive and distinctive styles. 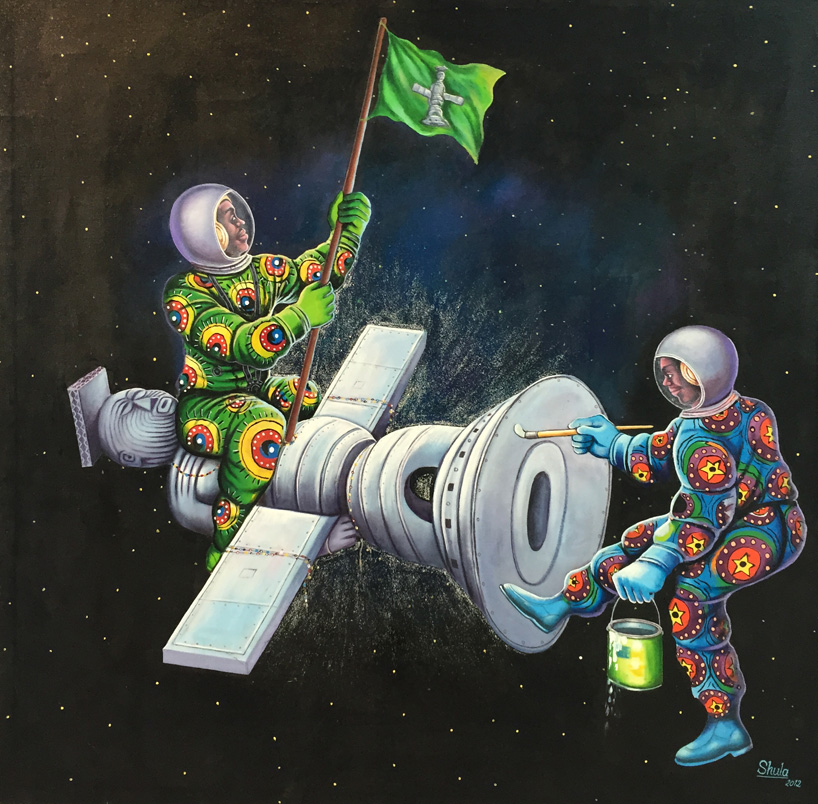 then, in 1978, an exhibition in kinhasa titled ‘art partout’ revealed a new wave of contemporary painters such as chéri chérin, chéri samba and moke, many of who are still active today. calling themselves the ‘popular painters’, they were fueled by their urban environment and collective memory, and approached figurative painting in a new way – influenced by daily, political or social events that were easily recognized by their fellow citizens. papa mfumu’eto, known for his independent prolific comic book production and distribution throughout kinhasa in the 1990s, also explored daily life and common struggles in his work. today, younger artists like J.-P. mika and monsengo shula, continue to draw on global current events to inform their work, carrying on the themes of their elders. 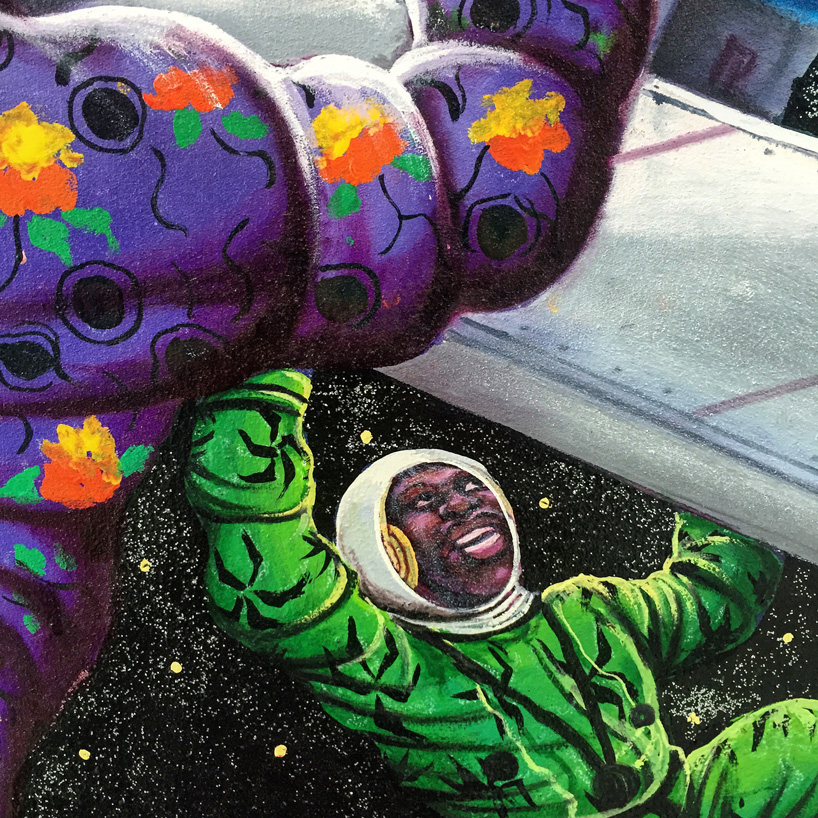 in the beginning of 1980s, and continuing through to the present, sculptors like bodys isek kingelez and rigobert nimi constructed intricate architectural models of utopian cities, or robotized factories, exploring the question of social cohesion. their artistic practice provokes a sense of self-renewal that in turn contributes towards a better collective future.

then in the early noughties, a new generation of artists was born, with members of the collective eza possibles, created in 2003, refusing to narrow the confines of the académie des beaux’arts of kinshasa. two of its founding members, pathy tshindele and kura shomali reaffirmed the livelihood of the contemporary art scene with their unconventional collages and paintings, along with their critical approach to art. 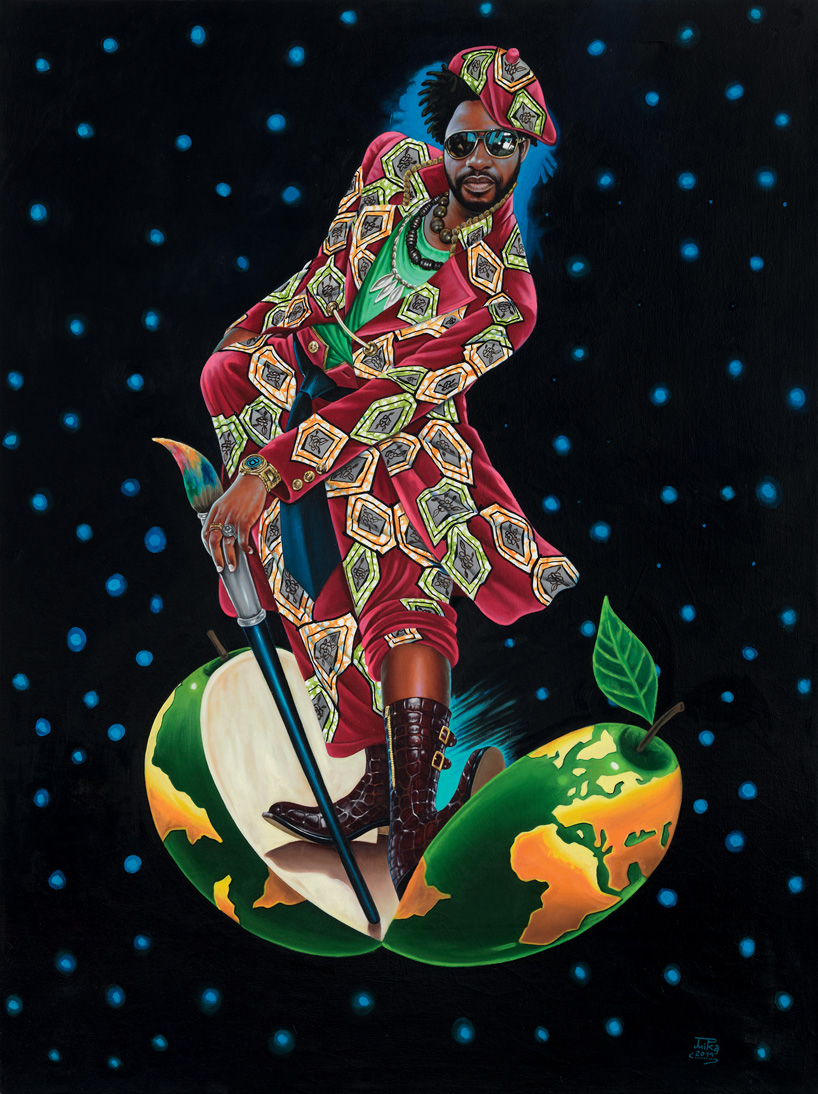 also represented in the exhibition is the vibrant photography scene in the country, in which photographers such as jean depara and studio 3Z, depicted the energy of the democratic republic of the congo’s capital. jean depara for example, was the designated photographer of musician franco, and portrayed the lively and extravagant night life of kinshasa in the 1950s and 60s; while studio 3Z’s ambroise ngaimoko, documented the world of sape (the society of ambiancemakers and elegant people) and body builders, capturing the attitudes and ardor of the youth in the city in the 1970s. 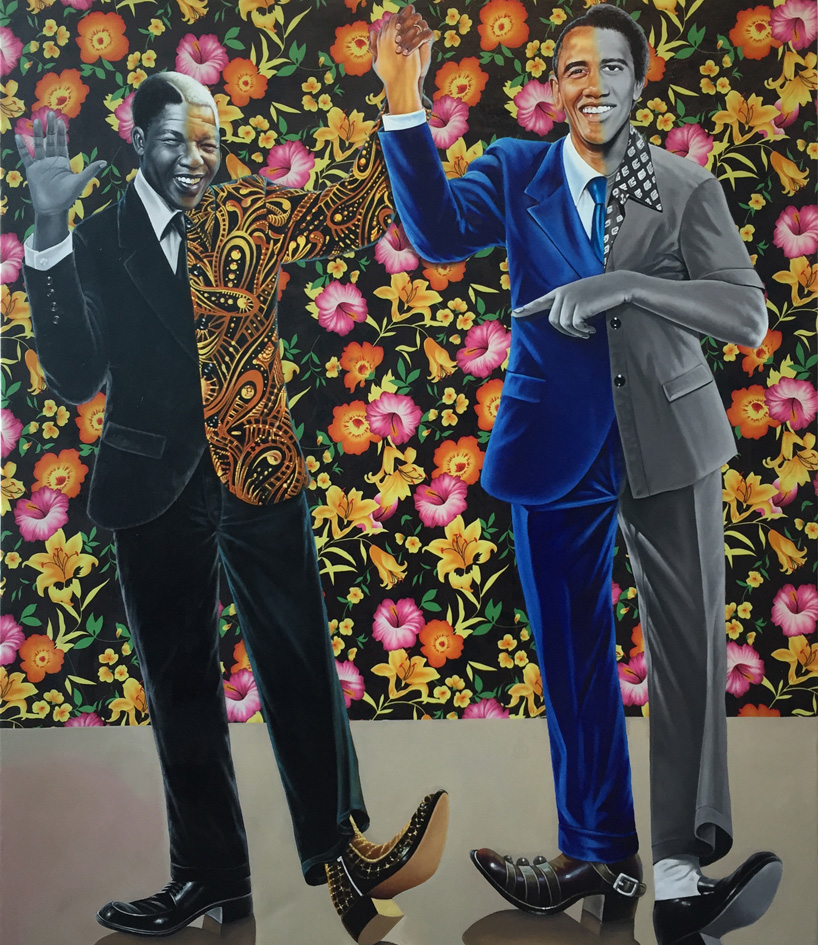 music also had, and continues to have an omnipresence in city life in the congo, actively contributing to its vibrancy. it was at the beginning of the 1950s, during the golden age of rumba, that the congolese music industry began to flourish. while its popularity and influence in sub-saharan africa is high, the genre is largely unknown outside of the continent. the harmonious and upbeat sounds of this important part of congolese culture can be heard throughout the exhibition, conversing with certain artworks on show. visitors are invited to listen to songs by tabu ley rochereau, franco and his group OK jazz, the soulful mbilia bel, papa wemba, and the eclectic trio madjesi, their tunes carefully selected by vincent kenis of crammed discs, in collaboration with césarine bolya. to accompany the music, they present ndule ya kala, a never-before-seen documentary which features spontaneous interviews of people who participated directly or indirectly in kinshasa’s 1960s music scene.

‘beauté congo — 1926-2015 – congo kitoko’ puts forth a colorful survey — a visual and audio cacophony — of the historical and thriving contemporary creativity in the democratic republic of congo, opening our eyes to a fresh perspective of the african nation. 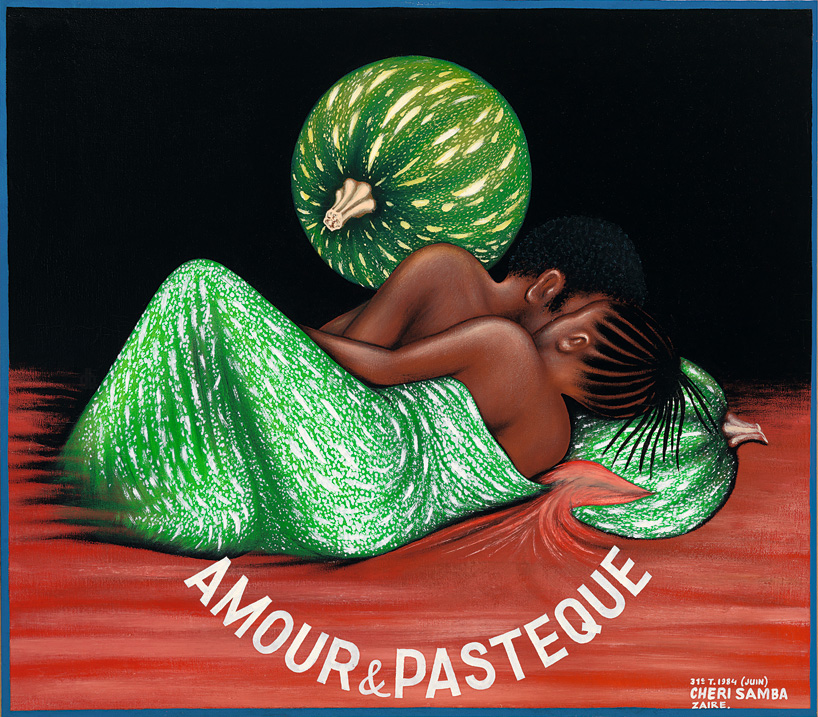 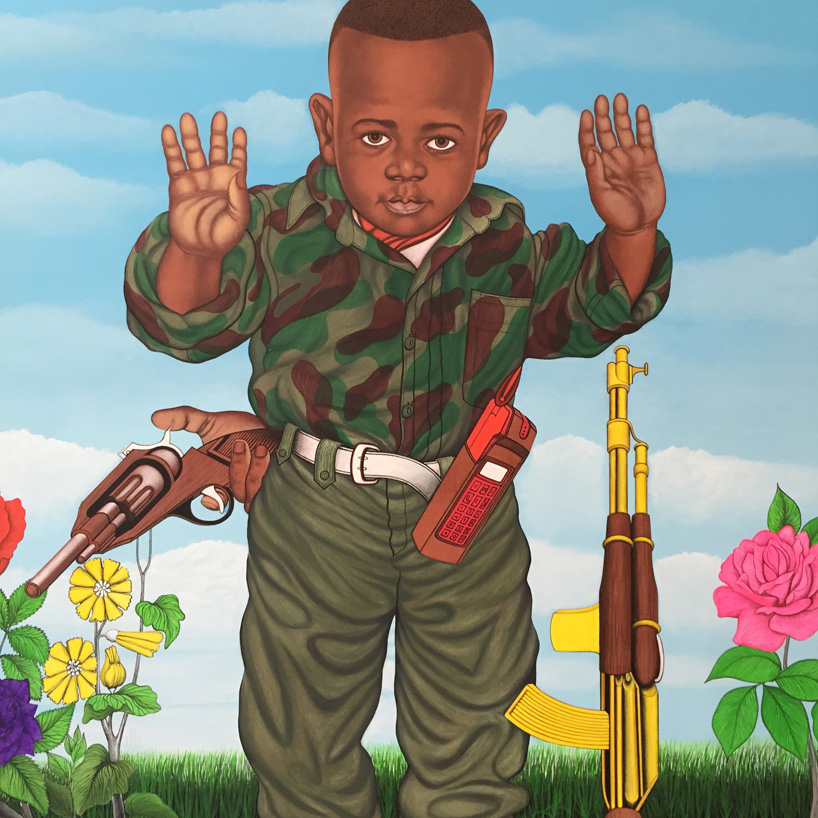 chéri samba, ‘little kadogo, I am for peace, that is why I like weapons’, 2004
image © designboom 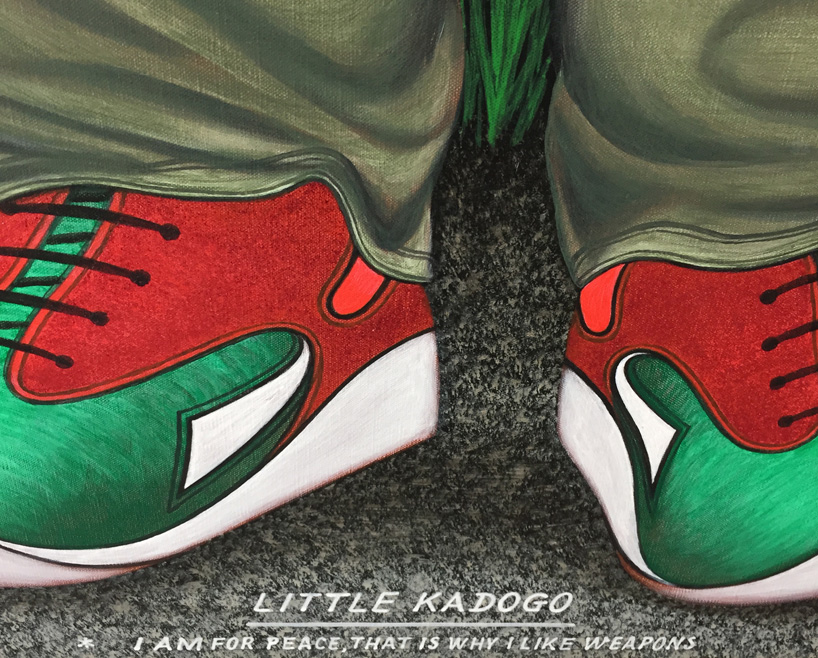 chéri samba, ‘little kadogo, I am for peace, that is why I like weapons’, 2004 (detail)
image © designboom 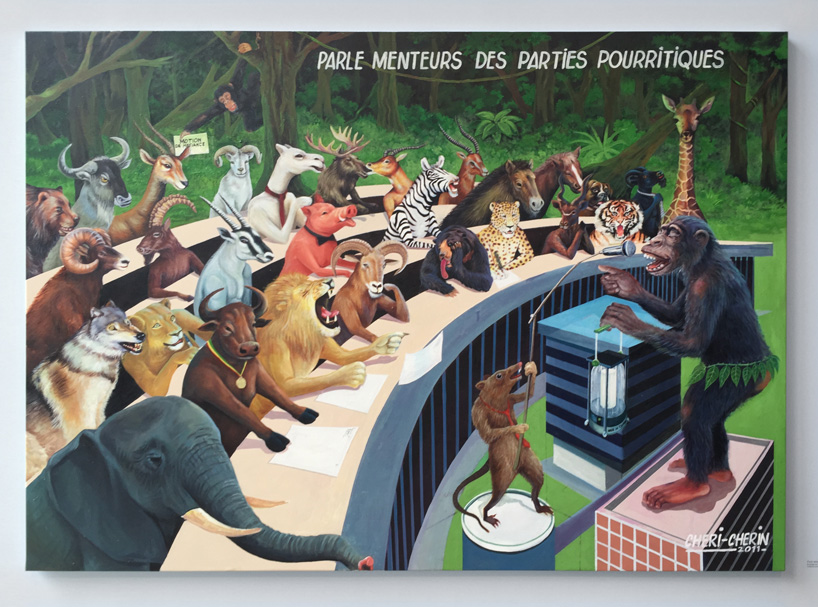 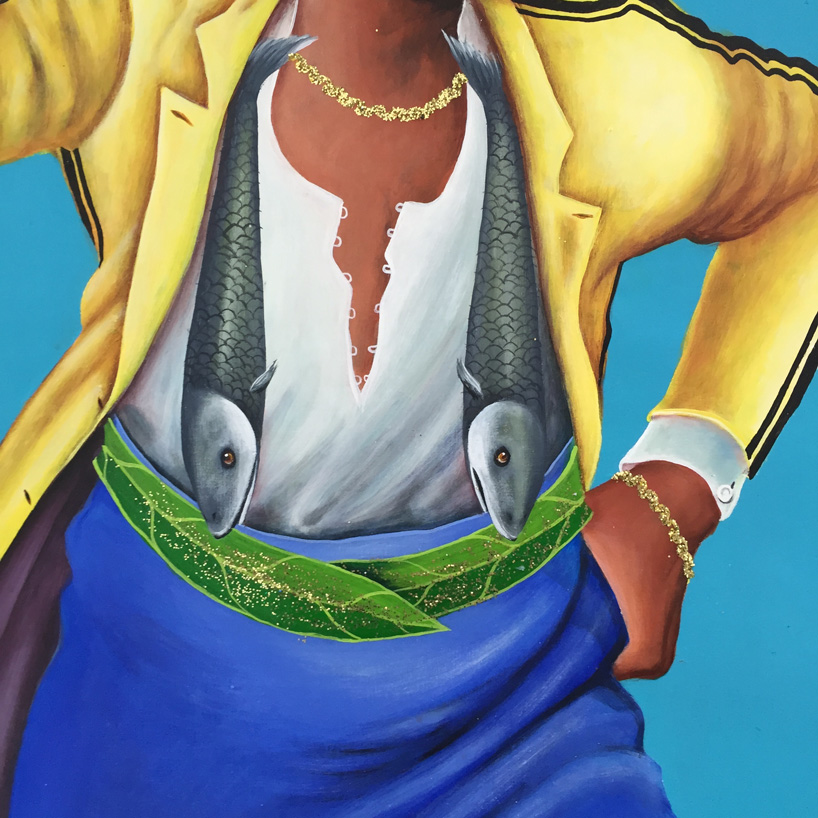 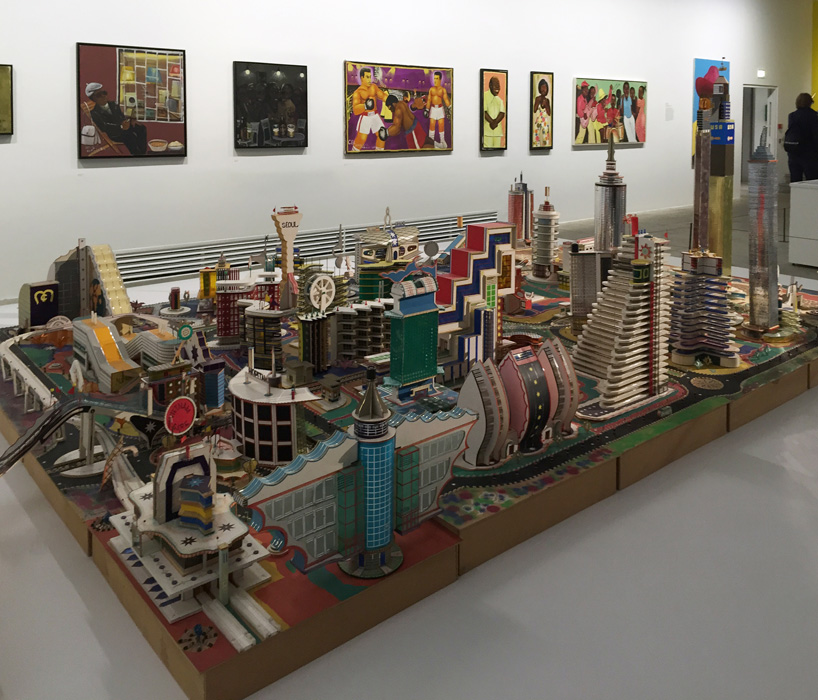 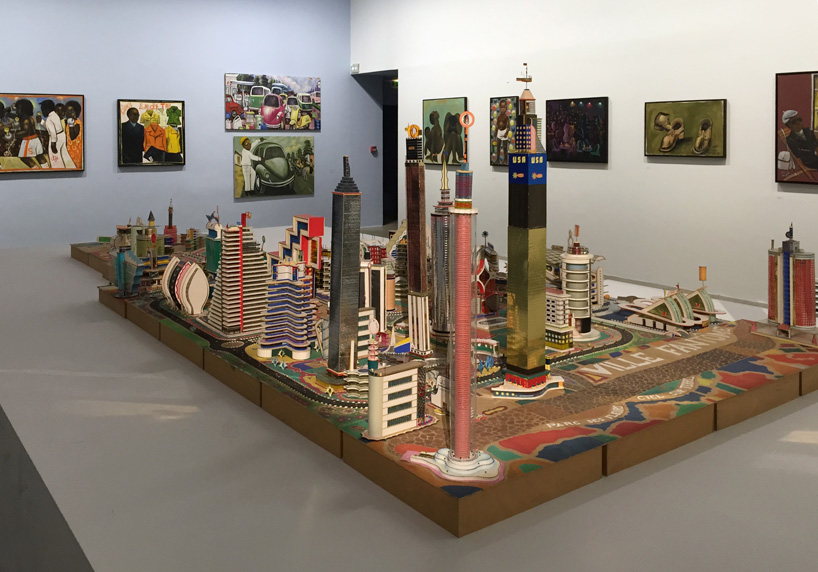 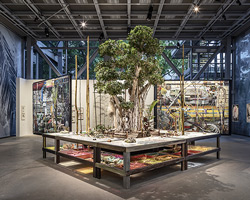 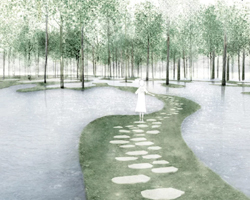 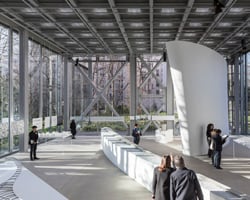 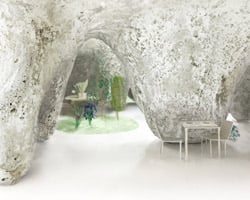 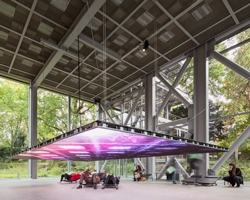 Oct 31, 2014
musings on a glass box by DS+R opens at fondation cartier