hans-peter feldmann (b. 1941 dusseldorf, germany) first began archiving and recontextualizing images appropriated from the vast storehouses of visual culture as part of his artistic practice in the 1960s. feldmann playfully corrals images from magazines, catalogs, books and other printed matter into seemingly arbitarary categories, delimited in the works’ wry, deadpan titles: ‘all the clothes of a woman’ (1973-2002) ‘legs’ (2008), ‘flower pictures’ (2006), ‘one pound strawberries’ (2004), ‘pictures of car radios taken while good music was playing’ (2004). these collections have been exhibited as multiples, in the form of books, postcards, and posters as well as in grids or loose clusters on the wall.

exhibiting at this year’s gwangju art biennale, ‘9/12 front page’ (2001) is a room-sized collection of the front pages of international newspapers from the day after the september 11 attacks on the world trade center in new york. the newspapers take a range of approaches to the tragedy, with sober headlines like ” US attacked” (the new york times) and “the new war” (le figaro), declarations of doom as in “apocalypse” (the daily mail), or expressions of fragile hope, as in “still alive” (the evening standard). the layout of the pages also varies widely, from the full-page image on the cover of ‘the times’, to the small thumbnail on the cover of ‘mundo’. the images , however, are oddly consistent: the instantly iconic pictures of the south tower erupting in flames and of the towers crumbling to the ground in a cloud of dust. feldmann’s work can thus be seen as a meditation on the representation of history through images–how certain images can become instant icons or immaterial monuments, and how such images can in turn transform our perception of historic events. 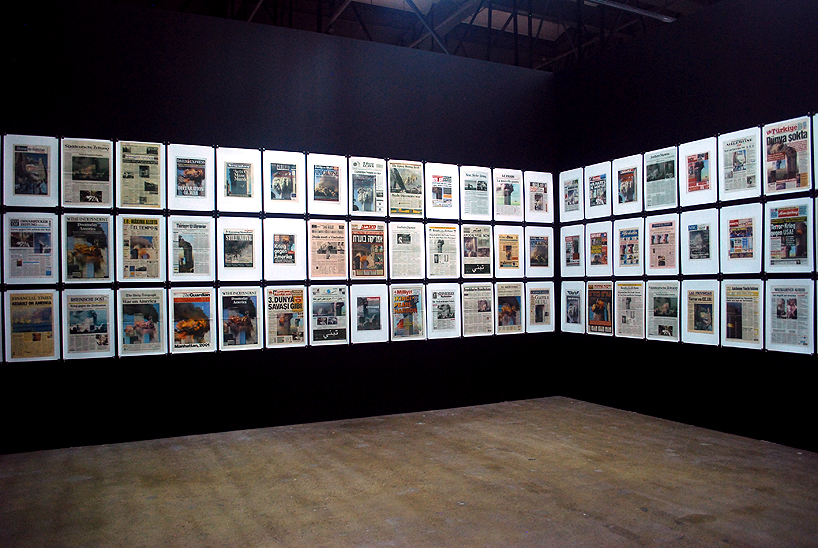 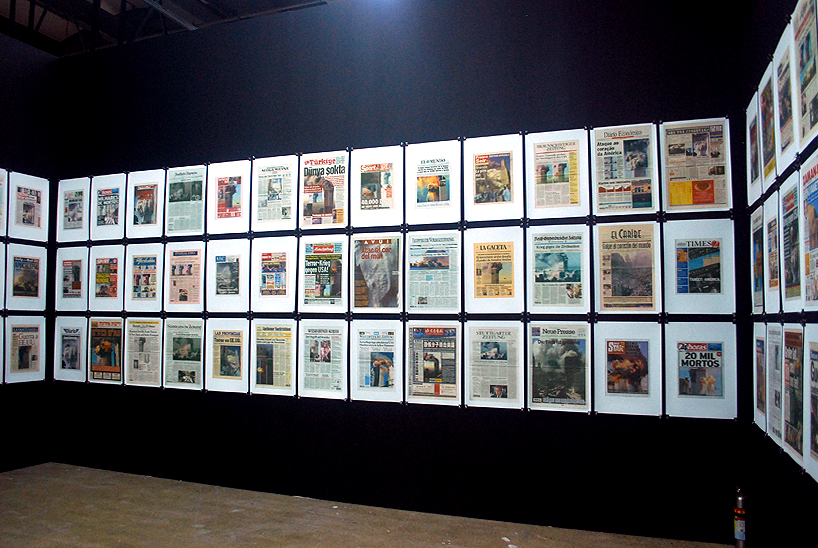 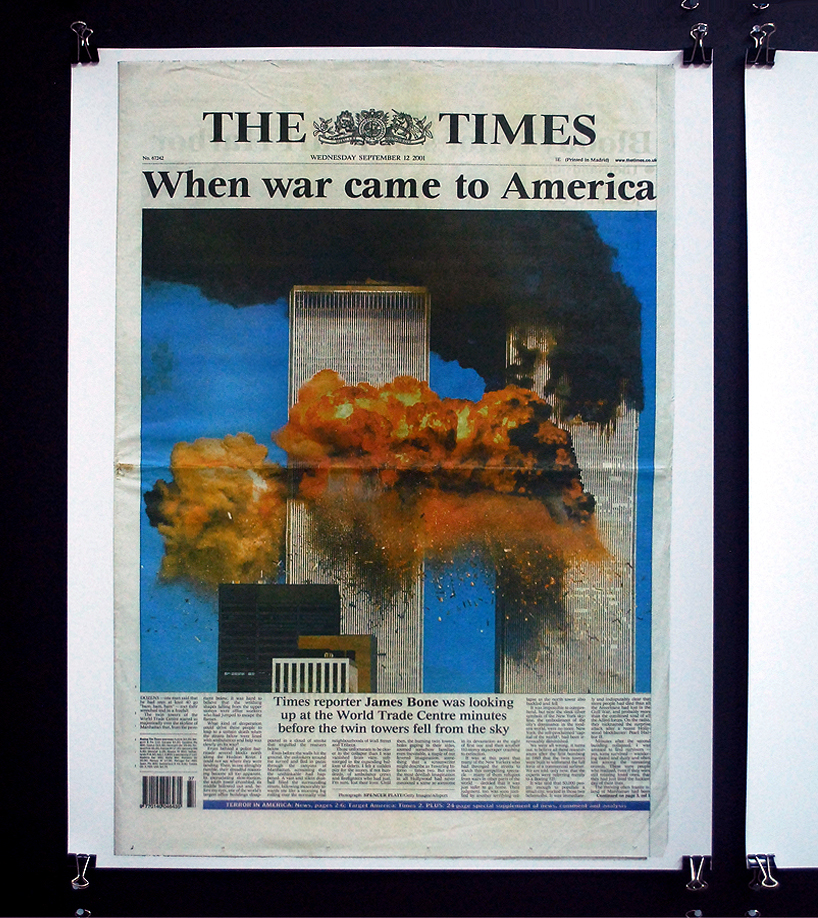 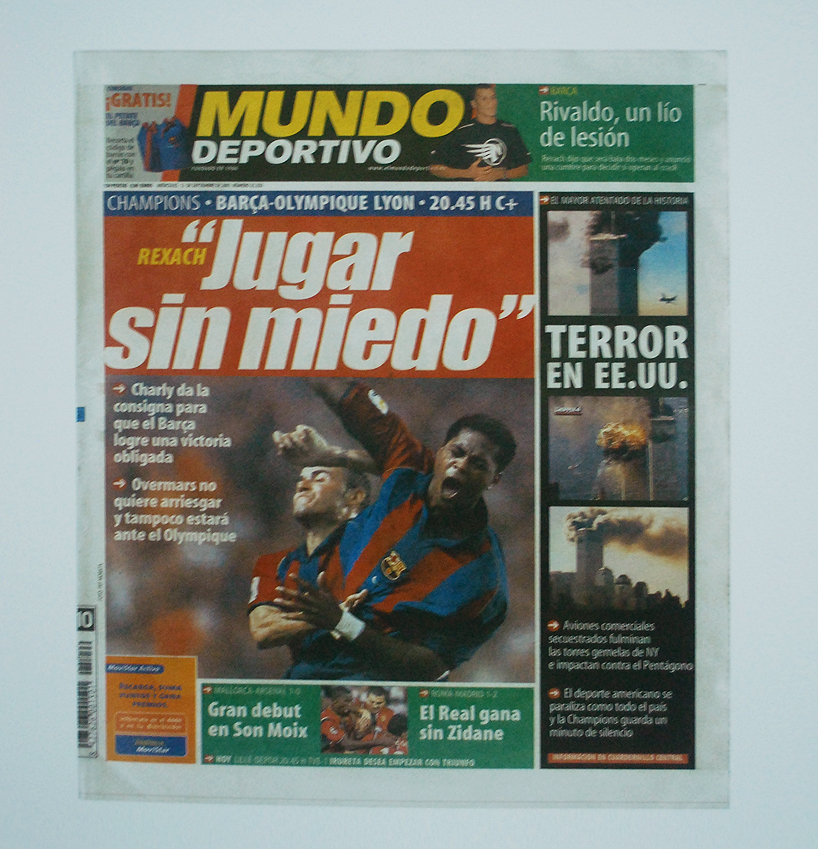 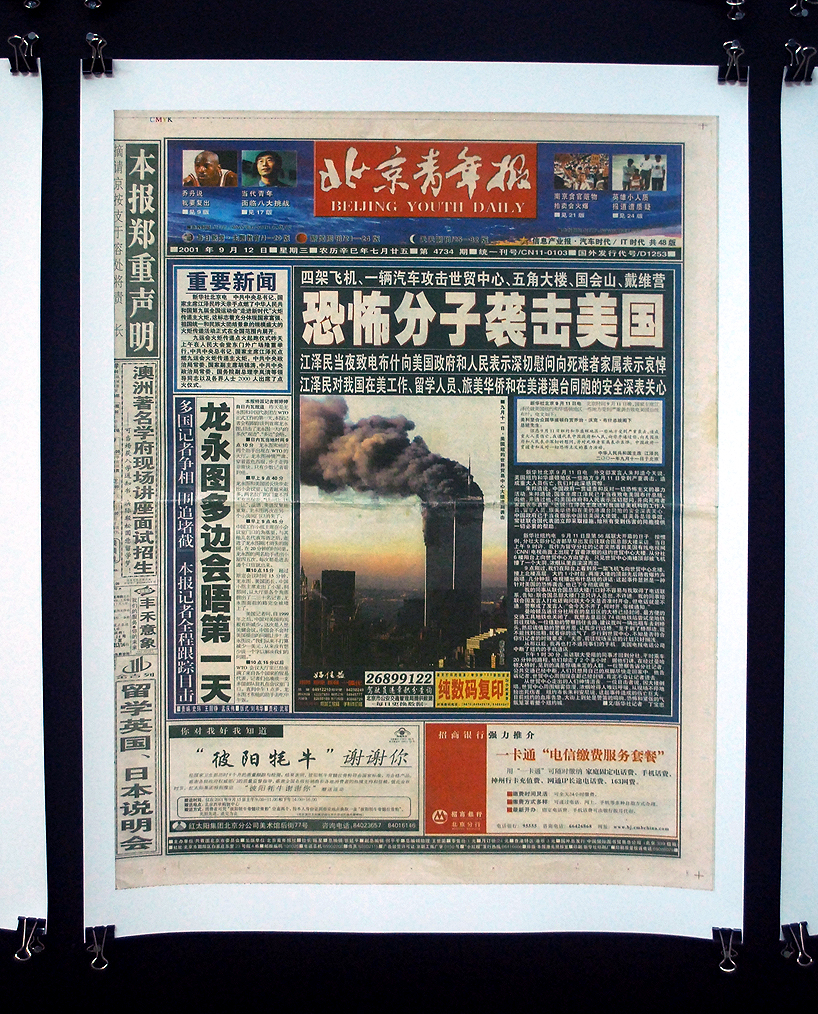 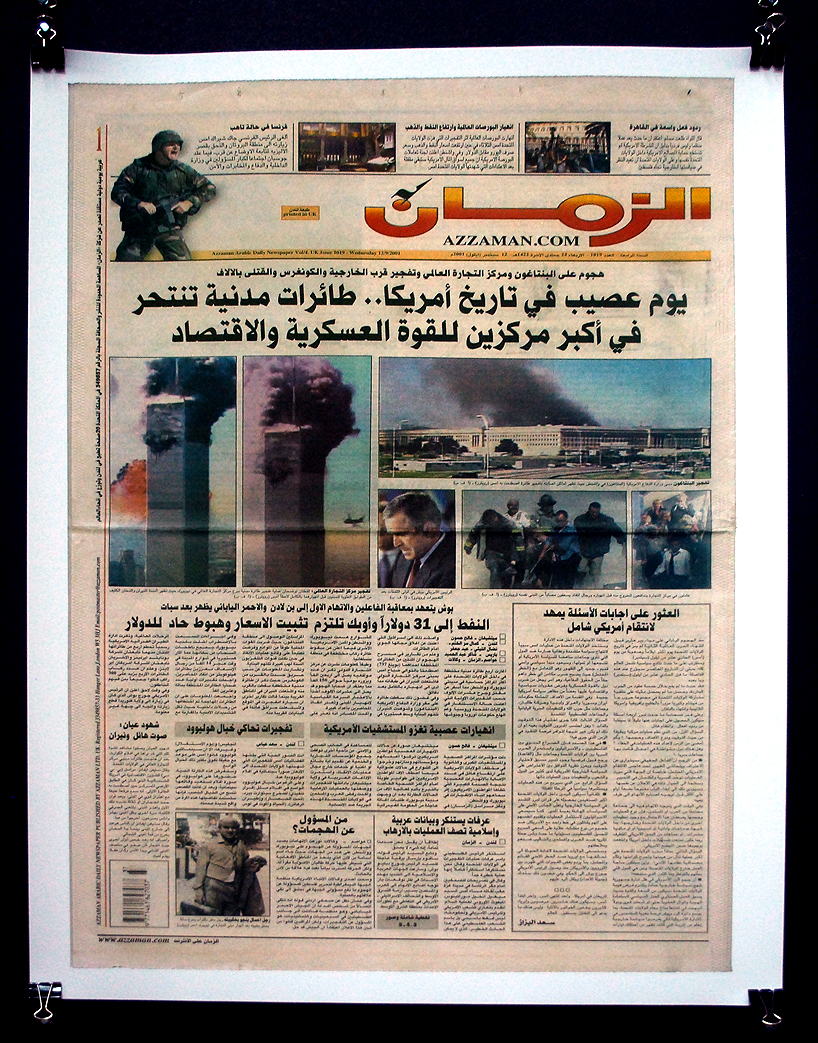 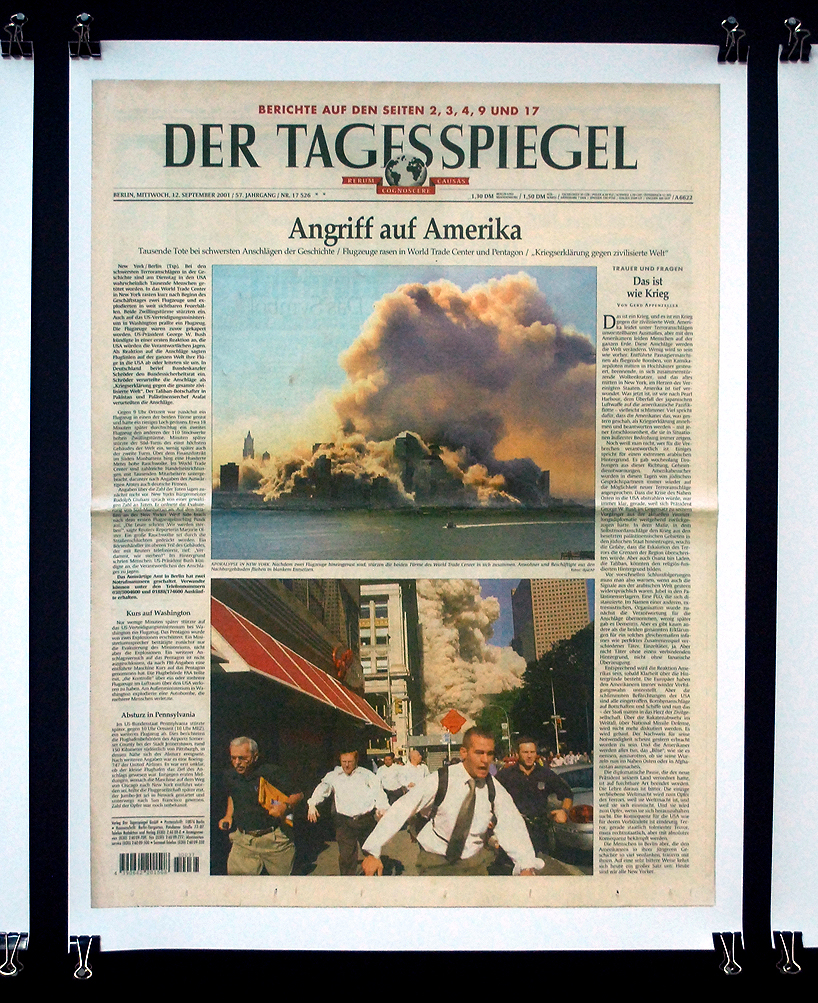 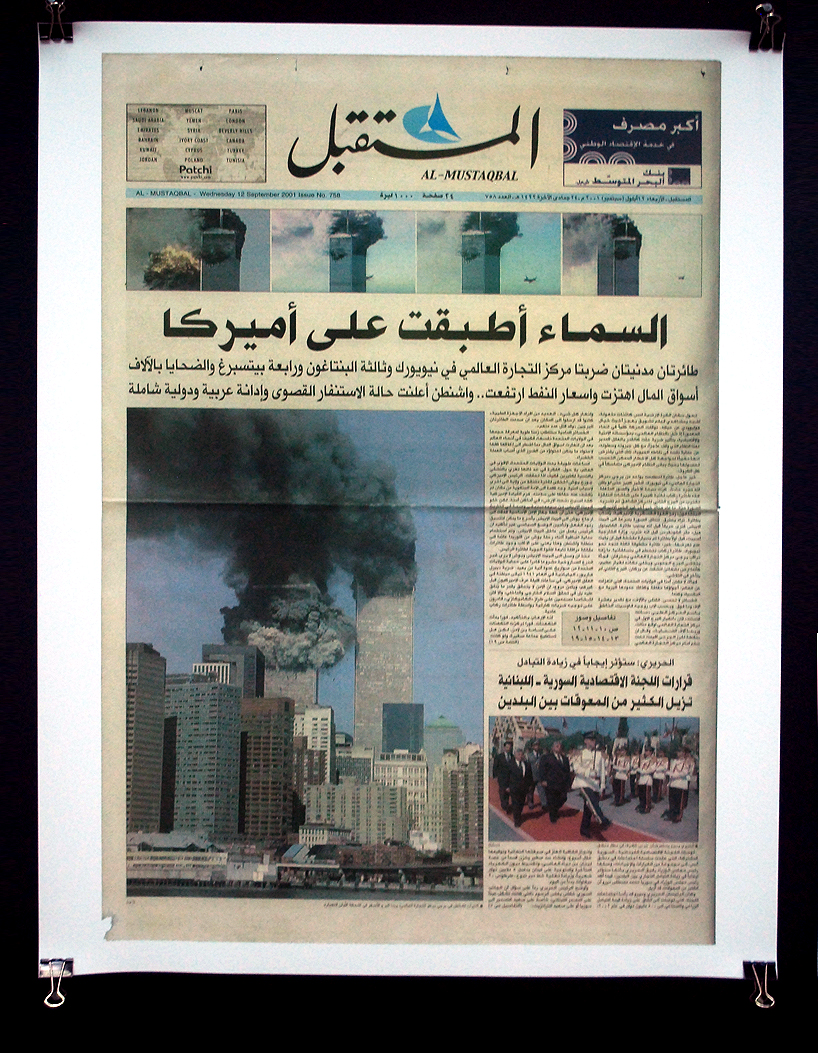 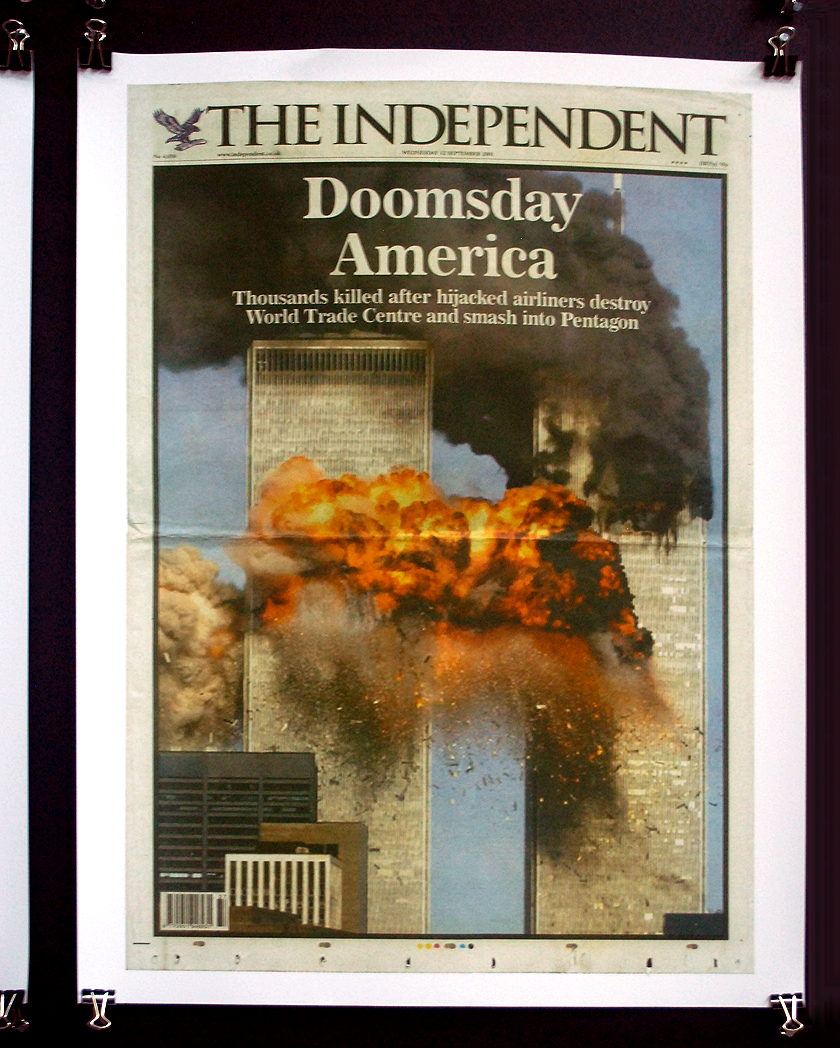