based in sydney, egyptian sculptor hany armanious presents 11 works in the exhibition ‘the golden thread,’ on display in australian pavilion at the venice art biennale 2011. with a sculptural practice grounded in the process of casting, the artist meticulously remakes everyday objects in unexpected materials. in opposition to modernism’s focus on opticality, armanious prioritizes process and tactility over aesthetics: while casting is customarily used to create multiples of an object, he subversively uses this method to produce one-of-a-kind items, often destroying the originals.

the selected artifacts are cast in deliberately non-precious yet durable materials, most commonly polyurethane resin. the resulting forms capture the wear and tear of the objects’ past lives, arranged in idiosyncratic assemblages to encourage prolonged viewing. 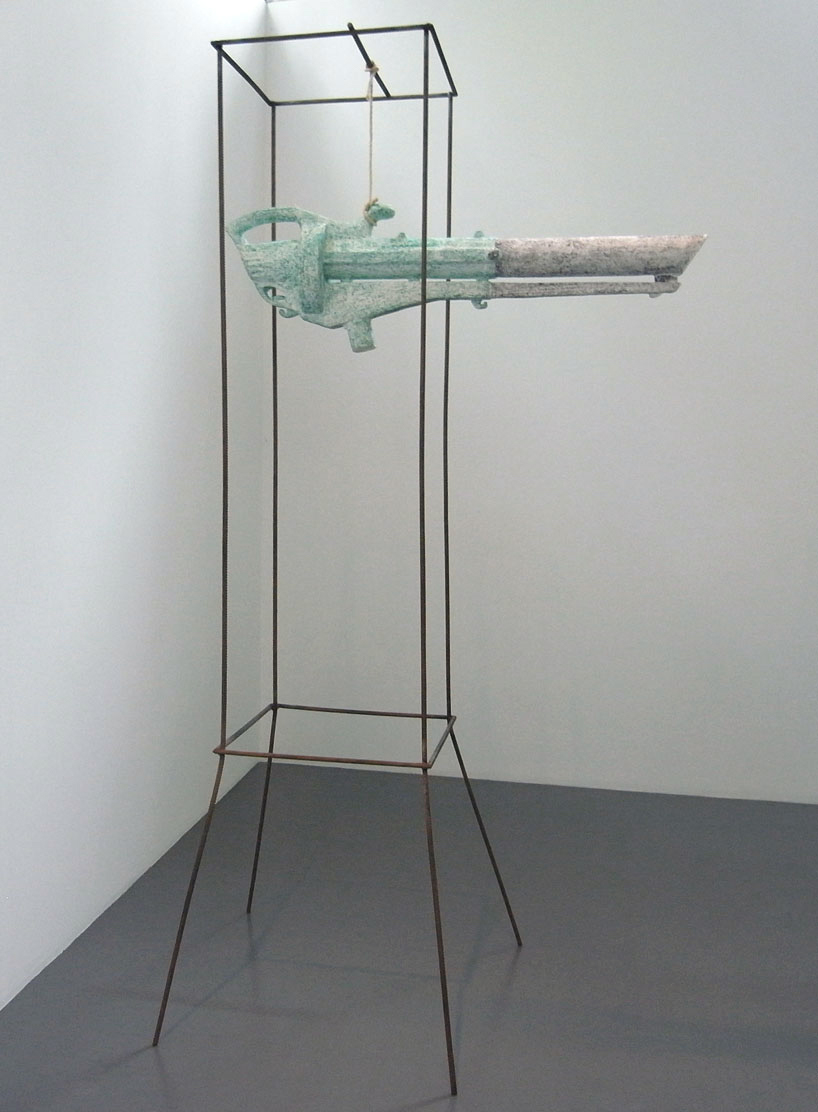 transposing alberto giacometti’s work of the same title, armanious converts a leaf blower into a surreally distended nose in ‘le nez.’ the comparison is jocular yet the jutting, weapon-like form resonates with the anxiety presented by giacometti’s figure. 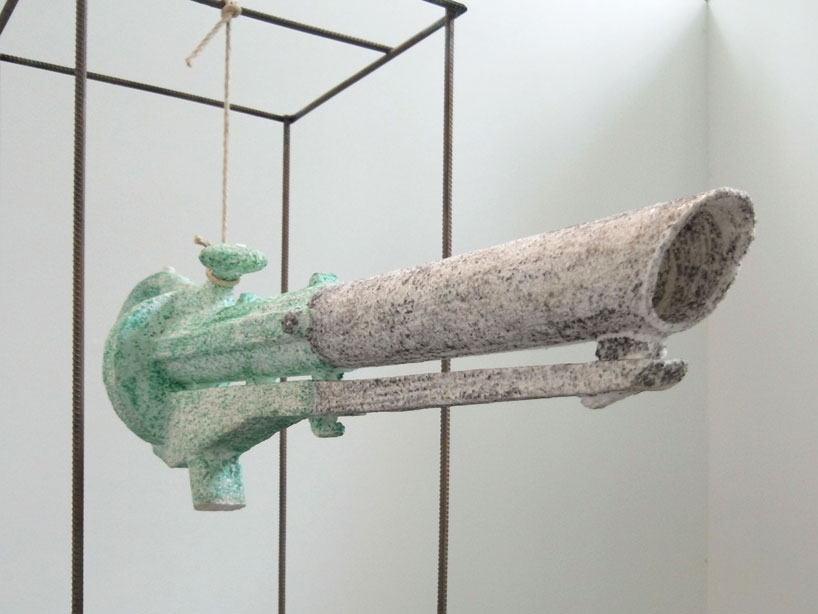 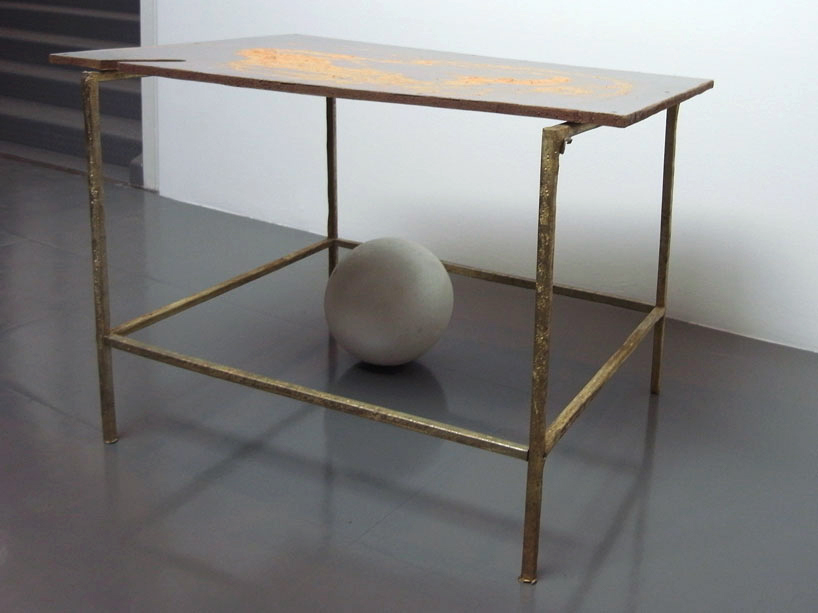 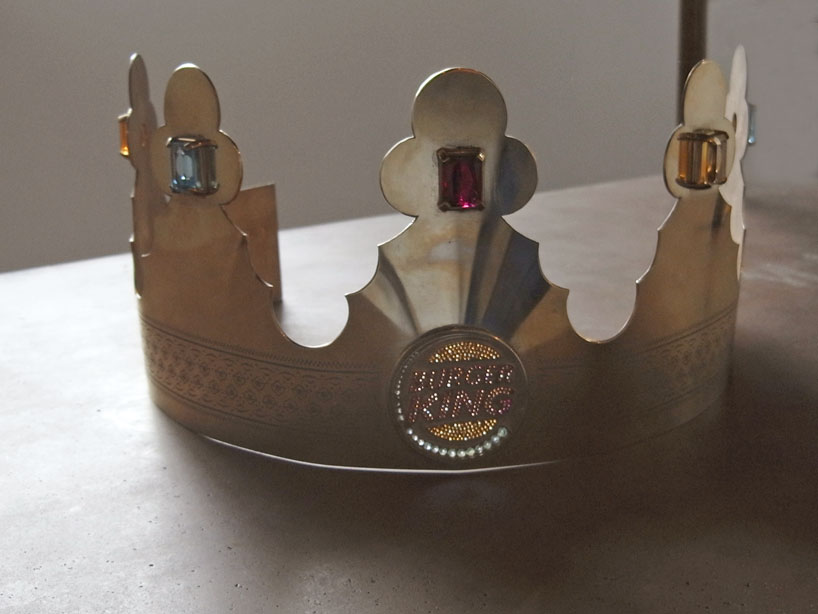 ‘azdeena persius’ features a burger king crown resting on the lowest of five stacked tables cast in bronze. one of his few works which does not use polyurethane resin, the crown is cast in sterling silver, plated with 18 carat gold and adorned with precious stones of tourmaline rubellite, blue swiss topaz, almandine garnets, and citrine. from tables to plinths to pinboards, armanious transforms objects typically used as modes of presentation into artifacts for inspection in their own right. 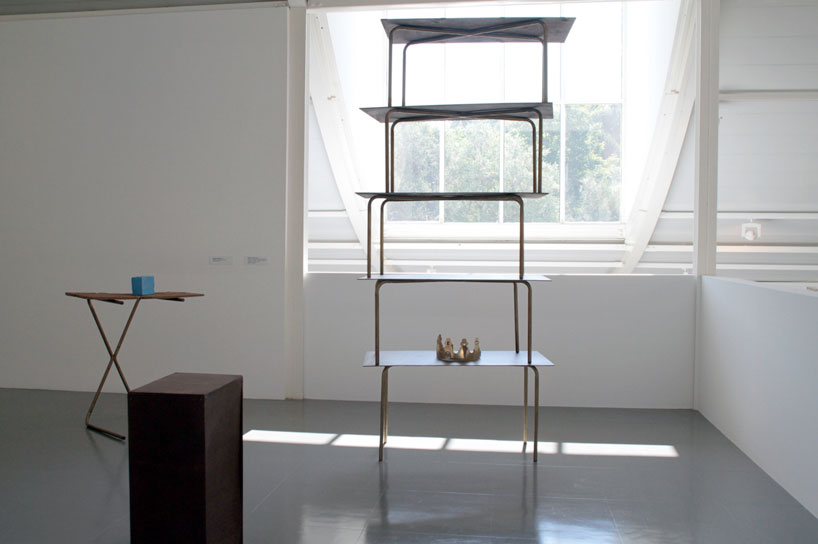 australian pavilion installation view, featuring (from left to right): ‘relative nobody,’ ‘set and setting,’ and ‘azdeena persius’ image courtesy of the australia council for the arts 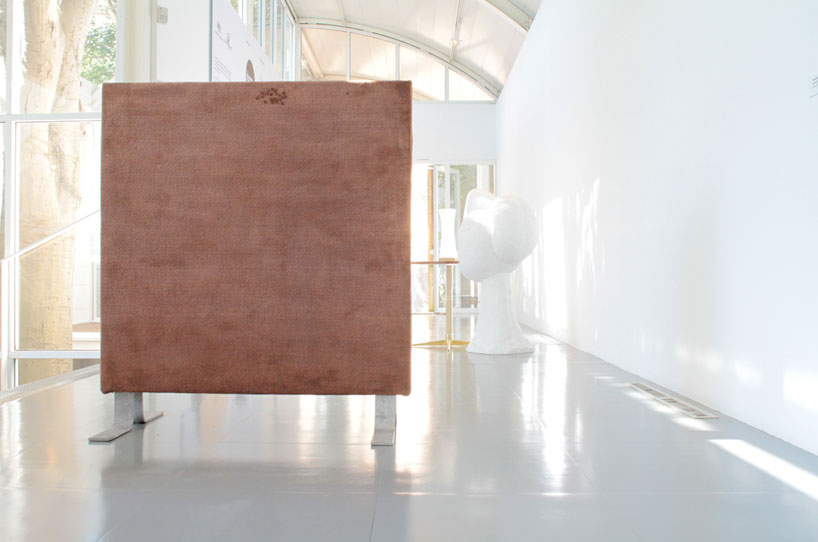 alternate installation view, featuring ‘interface’ (left) and ‘effigy of an effigy with mirage’ (right) image courtesy of the australia council for the arts

‘interface’ by hany armanious image by greg weight, courtesy of the australia council for the arts

a totemic form, ‘african witch doctor’ is comprised of several stacked baskets and a single black ceramic teapot cast in pigmented polyurethane resin. the invocation of ancient and mystical cultures in this work and also the exhibition title, ‘the golden thread,’ are indicative of artist’s belief in alchemical material transformation.

‘african witch doctor’ by hany armanious image by greg weight, courtesy of the australia council for the arts

this exhibition was commissioned by doug hall am and curated by anne ellegood. located in the giardini di castello, the australian pavilion was designed by architect philip cox and opened in 1988. the 54th international art exhibition in venice, italy, runs until november 27, 2011.