one million trees so far planted across the uk

Heatherwick Studio expresses its biophilia in time for Earth Day and the Queen’s Jubilee with a celebratory ‘Tree of Trees’ installation outside the gates of London‘s Buckingham Palace. Rising 21 meters (nearly 70 feet), the work will showcase 350 native trees together as a singular sculpture. The piece is expected to be temporarily installed as part of Queen Elizabeth II’s Platinum Jubilee during the weekend of June 2nd — 4th.

The Tree of Trees honors the Queen’s Green Canopy (see here), a ‘joyful Jubilee tree planting’ initiative which will introduce nature to tree-deprived areas throughout the UK. So far one million trees have been planted since its inception in October 2021, while the Queen herself has planted 1,500 across the world since she was crowned 70 years ago. The team at Heatherwick Studio notes that ‘the sculpture seeks to put the importance of trees and nature at the heart of this historic milestone.‘ 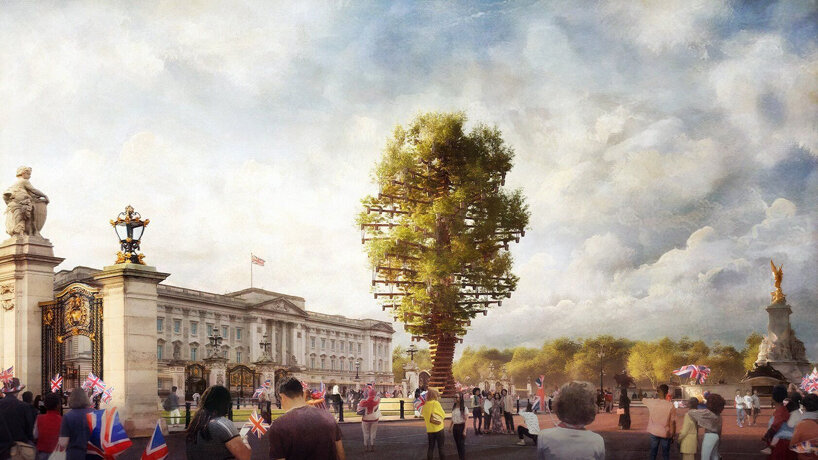 the tree of trees

This ‘Tree of Trees’ by Heatherwick Studio (see more here) will take shape at Buckingham Palace as an arboreal scaffold which will host 350 aluminum pots, each hosting a young native tree. Each pot will be embossed with the Queen’s cypher, while each tree will be meticulously cared for and will be ultimately gifted to selected community groups and organizations which have yet to be announced. The sculpture itself will be constructed with steel, both reclaimed and new, and sourced from local suppliers across the country.

So far, many Brits are skeptical of the proposal, especially after MVRDV’s grandiose Marble Arch Hill (see here) which was built last year and was less than expected to say the least. Of course, this Tree of Trees installation will be funded by Bloomberg Philanthropies and not by taxpayers. Stay tuned for designboom’s coverage of the project’s realization in early June!