born in tabriz, iran in 1985 and 1991 respectively, street art siblings ICY and SOT began making work under less than hospitable conditions. initially influenced by the graffiti and stencils in skateboarding films and video games, the pair soon began making their own distinctive mark on the walls of their native city. speed and discretion often go hand in hand with creating unauthorised artworks but this is especially true in tabriz, where an unsympathetic and intolerant legal system often hands out charges much more severe than those usually associated with vandalism. 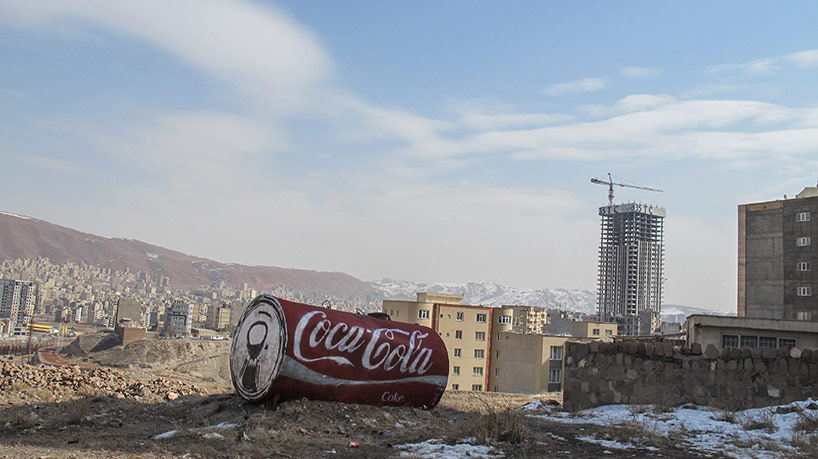 at home with the realities of state wide censorship and more than used to their artworks surviving for less than a few hours, political dissent and social protest is a vein that has run through the duo’s work since the beginning. in 2012, ICY and SOT took a solo exhibition of their work in new york as an opportunity to emigrate, leaving iran and relocating to the thriving brooklyn arts scene. since then, the duo’s work has gone from strength to strength, expanding into an ever more diverse number of mediums while retaining its rousing and defiant spirit of resistance through art. 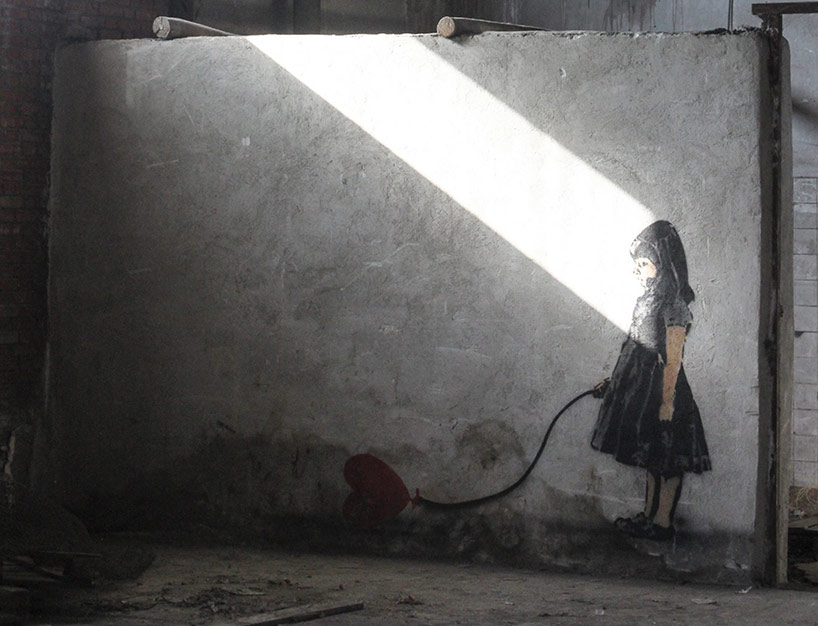 the pair are used to their artworks surviving for less than a few hours, often swiftly removed by the authorities
‘broken heart’, tabriz

the issues with which ICY and SOT engage are far reaching, and include poverty, homelessness, women’s rights, gun control, and immigration. their most recent show, ‘human (nature)’, presented at thinkspace gallery in culver city, L.A., grapples with the all encompassing effects of climate change on the earth and human kind, and our collective responsibility to fight for the life of our planet. using sculpture, photography, stencil and more, the pair create gripping images rife with narrative that force the viewer to engage with both the inherent beauty and urgent message of the collection. 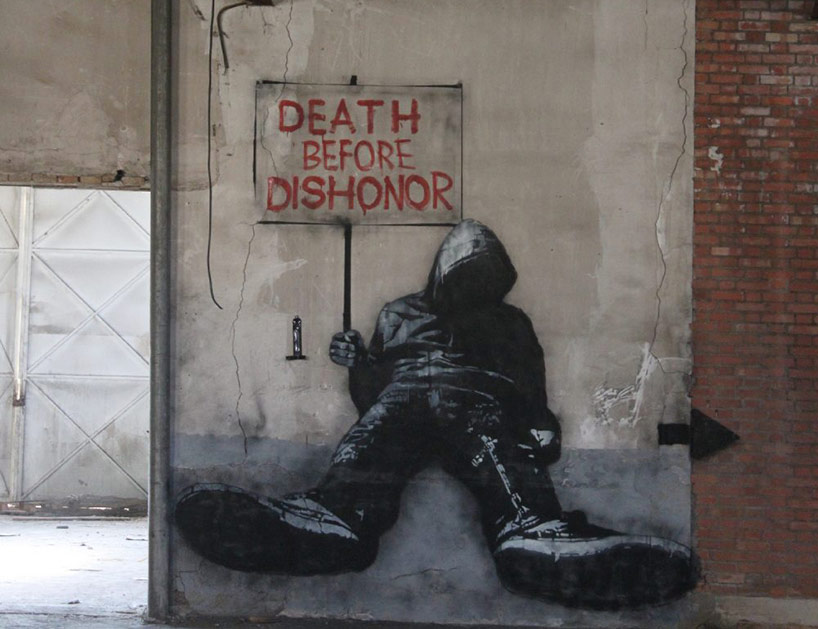 a spirit of social protest is present in each of the siblings’ works
‘death before dishonor’, tabriz

designboom: can you give us a bit of background as to how you got started? where did the first impulse to start creating work first come from, and how did you go about learning the craft of stencilling? do you remember the first stencil you made?

ICY & SOT: it all started with our career in skateboarding. we used to make small stencils and stickers and put them up around the city. at the time we didn’t know very much about the street art movement, but through internet (flickr) we got to know other international street artists and we became more interested.

we loved the simplicity and quickness of single layer stencils. since it was all illegal in iran we had to be really quick putting a piece up. we learned so many different ways of stencilling by just experiencing. we don’t specifically remember the first stencils, but the very first ones were stencils of punk bands and skateboarding logos, which we decorated our rooms with when were teenagers. 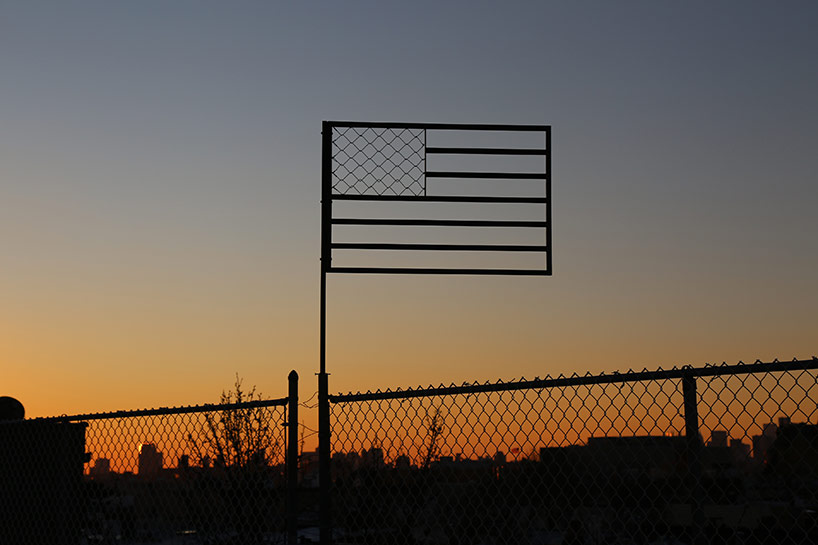 DB: when you started out there was a significant risk attached to getting caught—has the government attitude changed at all in iran since then and has the street art community in tabriz become more accessible?

I&S: it’s still all illegal and underground. nothing has really changed since then. the street art scene was very small in tabriz. it was basically just us and a couple of friends. it is actually small in the whole country, and right now there isn’t much happing since most of the street artists have left the country. 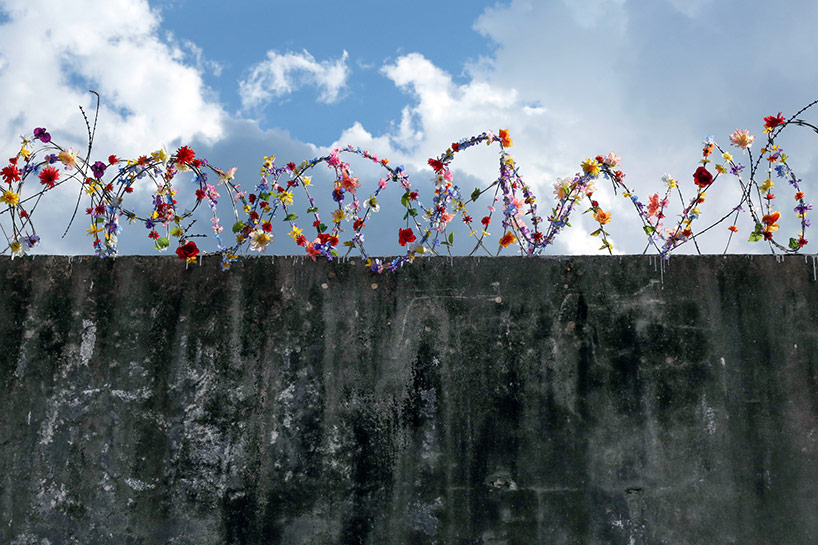 DB: how have the conditions under which you created work in iran affected the way you make work in the US?

I&S: growing up with those conditions in iran made us appreciate the freedom we have here, but that didn’t change the way we make work in the US. it’s amazing to have freedom of speech. you can talk about a lot of issues loudly. we can speak up and make work about anything we want. whether we live in the US or not, we always want to make work about the issues the world is going through, like gun violence in the US, the refugee crisis everywhere, and ecological justice for our planet. 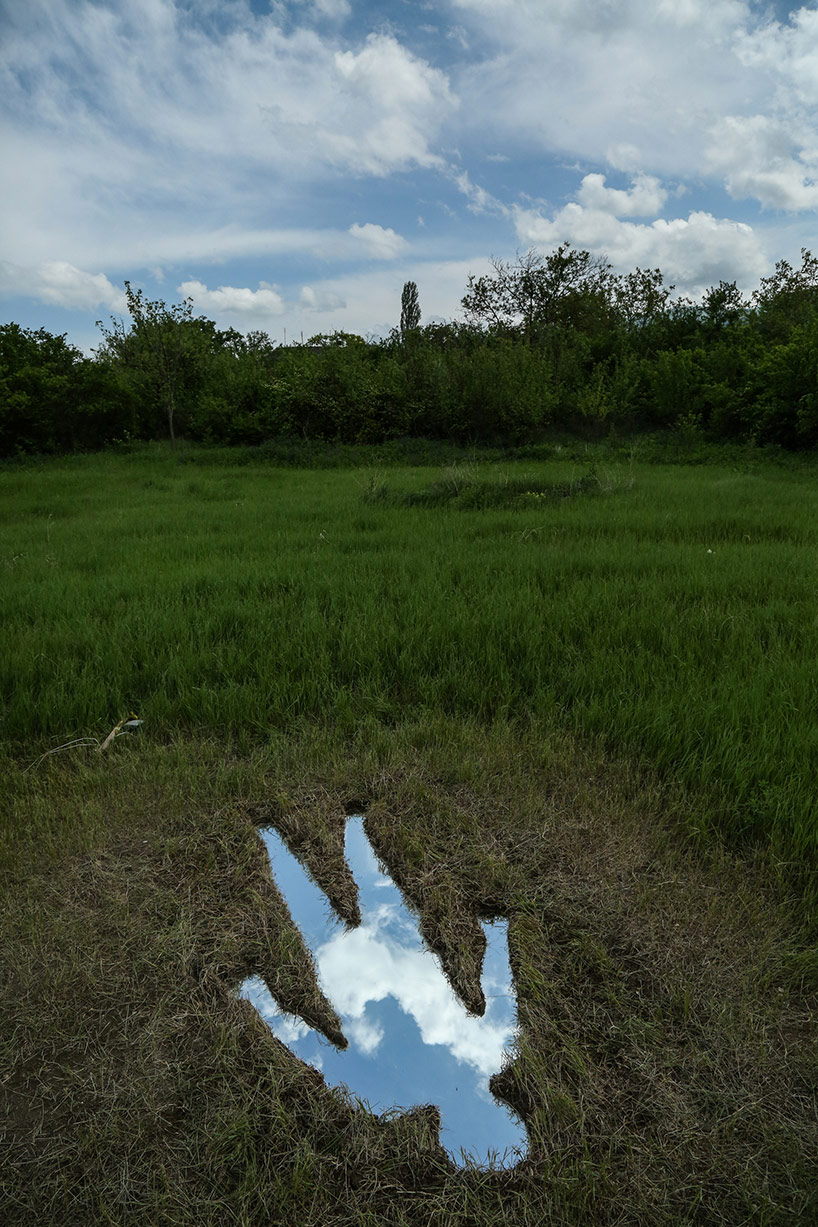 the pair create gripping images that force the viewer to engage with both the beauty & urgent message within
‘nature’s reflection’, tblisi, georgia

DB: have you noticed a change in the role and general reception of street art in the US since you moved there in 2012?

I&S: yes, we think street art is getting more and more commercial.

DB: can you talk a bit about your transition to making more sculptural, intervention based work? practically, what was this change like? how did you approach working with these new materials and what challenges did they present to you?

I&S: even in our early stencil works we tried new ways of making works. we always like to change. about a year ago we decided to think outside the box and basically whatever idea we have we make it happen with whatever medium or material that makes the work stronger. we started doing performance, interventions, instillations and sculptural work.

it’s more fun and exiting trying new mediums and materials. every time we learn so much, and now there are more possibilities to share our ideas with our audience. 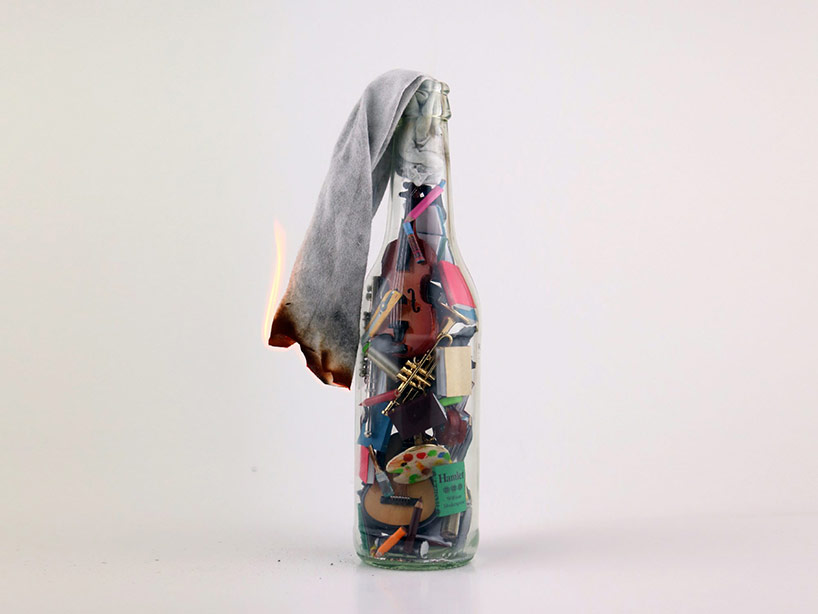 while some pieces are tongue in cheek, they still offer a clear critique of the world around us
‘art-molotov’

DB: can you tell us a bit about your recent show ‘human (nature)’? what was the motivation behind these pieces, and how did this show come about?

I&S: the inspiration comes from nature; it’s where we always find peace and inspiration. it’s so sad to see the planet crying now. there have been so many unusual natural disasters recently. we need to respect our planet now more than ever. we have destroyed so much of it already that we can’t repair or even stop. but we can give the planet a longer life, by caring more about it and doing something. the impact might be small but if all of us try we will have a better chance.

we used lot of plastic trash collected from ocean for the majority of the works in the show. for every 5 water bottles only 1 gets recycled. we all should try to reduce the amount of plastic we use in our lives. every single piece of plastic that has ever been created since the 19th century—it’s still somewhere in our planet. plastic is killing the planet and our health. there is too much plastic floating around in rivers, seas and oceans. eventually, our over-use of plastic ends up on our own plates, in fish and seafood. 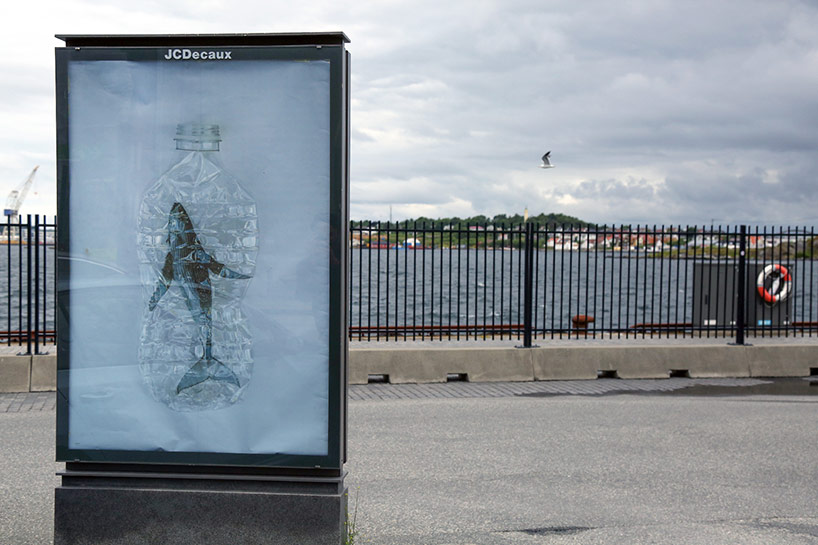 ‘every single piece of plastic that has ever been created since the 19th century—it’s still somewhere in our planet’
ad takeover in stavanger, norway, 2017

DB: public activism and political dissent is something that has been very much part and parcel of your work since the beginning. how important do you think it is that street art—and art in general—is used as a means of stimulating political change?

I&S: we think it’s very important to use art for social and political change, especially public art because it has more diverse viewers. we believe that the role of an artist is to advocate for the freedom and hope of the general public and to raise awareness about the issues of the time.

DB: do you have a specific piece that is your favorite, or that has stuck with you over the years?

I&S: if we had to choose a specific piece, it would be ‘let her be free’ because, sadly, it has always been relevant in regards to the forced hijab and speaks about women’s empowerment in general. the first time that we made that piece was for a group show that we curated in tehran, called ‘NYC to tehran’.

in iran, the hijab is forcible. there is a movement right now called the ‘girl of an enghelab street’, which started after the government imprisoned a woman who was standing on a electric box in a busy street in tehran without a headscarf during the ‘white wednesdays’ protest against iran’s female clothing rules. she was eventually released, but hijab is still forcible in iran. 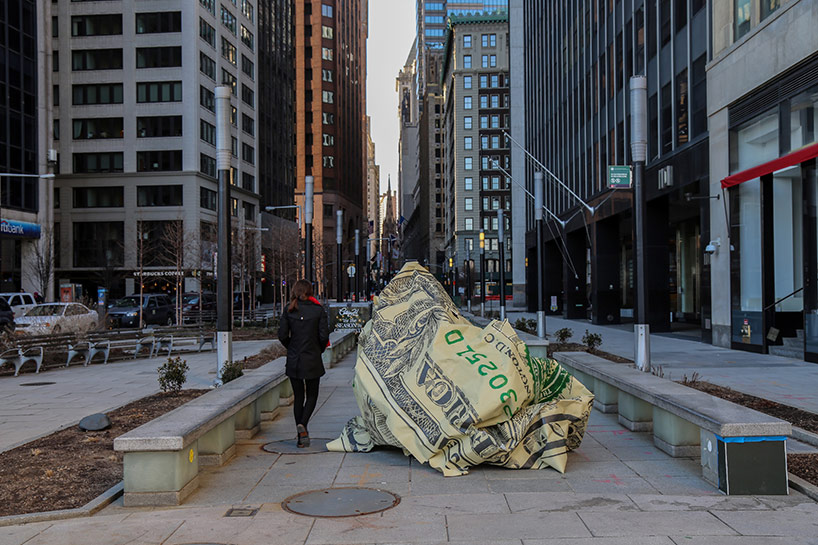 public art especially appeals to the pair, due to its high level of visibility and diverse audiences
‘dirty money’ installation on wall street, new york

DB: is there any medium you haven’t tried yet that you are eager to explore or experiment with?

I&S: we can’t wait to experiment with new materials for installation and sculptural works.

DB: are there other artists who you’re particularly interested in at the moment, or who have influenced your work?

I&S: yes. to just name a few, we really love the works of john fekner, fra biancoshock, spy,and escif as well as richard hambleton, who sadly recently passed away. their works have inspired us continually. 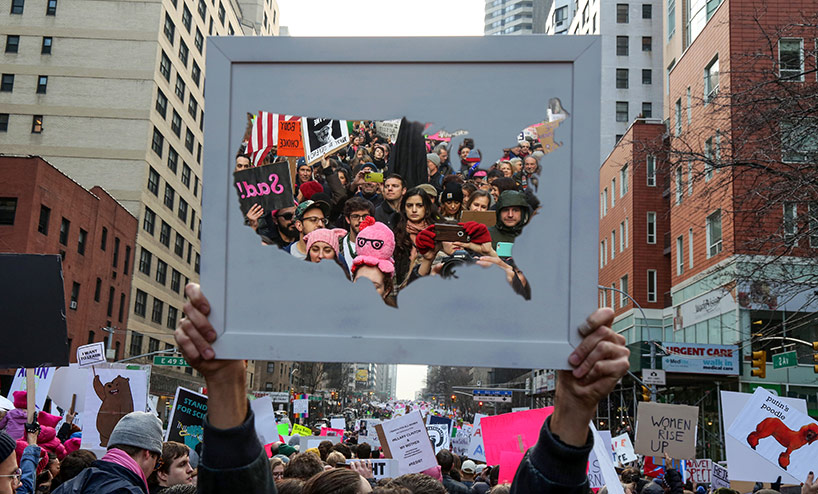 ‘we believe that the role of an artist is to advocate for the freedom and hope of the general public’
‘united america’ at the women’s march in NYC, 2017

DB: do you have any upcoming projects or plans for the future you’d like to share with us?

I&S: we are going to hawaii to make an installation for pow wow hawaii soon. when we get back, we will be working on an installation for moniker art fair new york. then we will be traveling to europe to make work for some festivals and will begin to prepare for our first solo museum show at moco museum in amsterdam. 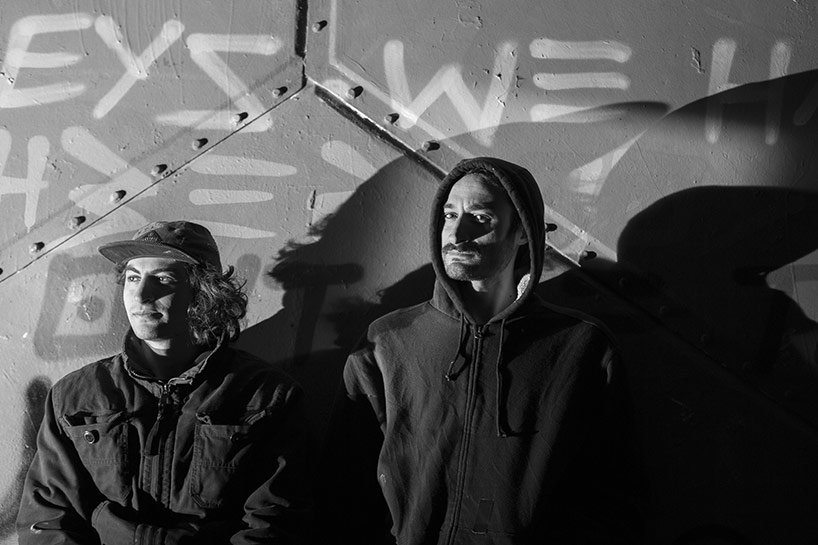