the tate modern is currently exhibiting a retrospective exhibition of the pop artist roy lichtenstein, whose work depicted images which were directly appropriated from comic artists like irv novick, russ heath, jack kirby, joe kubert and john romita, who received no fee or credit from the success of his work.

in response to the exhibition, rian hughes and jason atomic have curated ‘image duplicator’ a show which raises questions about appropriation in art using lichtenstein as a case study in which to ask whether his career was an act of brilliant recontexturalization? art world snobbery? gallery shortsightedness? cultural annexation? or something else entirely?

hughes and atomic invited real comic book artists, illustrators, designers and cartoonists to ask these questions and share their own views via an artwork. each of the participating creatives were asked to ‘re-appropriate’ one of the comic images used by lichtenstein, going back to the source material, manipulating it into an ‘original’ work, while commenting on the act of doing so in the process.

on show at orbit comics gallery, london from may 16th – 31st, 2013,the money raised from selling prints and originals will be donated to the hero initiative, which helps down-on-their-luck comic book veterans.

‘I knew the  number of the men whose work was appropriated by lichtenstein, and their outrage at being regarded as source material by what one of these guys referred to as ‘…a galizana ratfuck…’ was at least as deep and profound as their shock and dismay at the money being made off these canvases.

I write this having just tossed the past sunday’s new york times into the recycler, which features an advertisement for BONHAM’s auction, the top of which was a miserable mel ramos painting of the trickster, a bad copy of a carmine infantino drawing, estimated at between $500,000 and $700,000USD. some shit never seems to go away. it’s disheartening to realize so late in life that ineptitude, with a healthy splash of condescending irony, made these cultural vampires wealthy.

fuck them all.’ – howard chakin 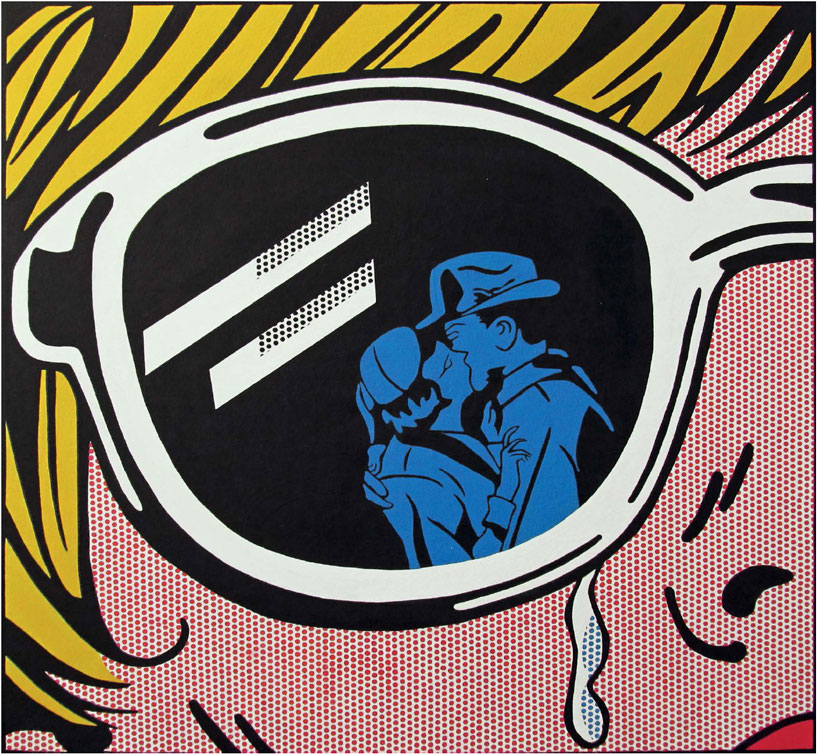 ‘I call the painting ‘lichtenstein pastiche #17’ (after cardy and kirby) as I pastiche several of the motifs that lichtenstein drew uponthroughout his career and in his oeuvre into one image, specifically appropriations from comics, images of crying girls, images of a couple kissing, reflections on mirrors, and also the recurrence of a single eye or monocular images.

I feel this demonstrates that the rich visual language from which lichtenstein appropriated his own artistic language was far from the set of clichésthat the fine art world often dismisses comic art as, and that I am reappropriating lichtenstein’s appropriation ‘technique’ in support of comic book art.

the two sources I have used for my painting are young romance #150 cover by nick cardy and young romance #83 – page 17, panel 1 by jack kirby.’ – betty boolean 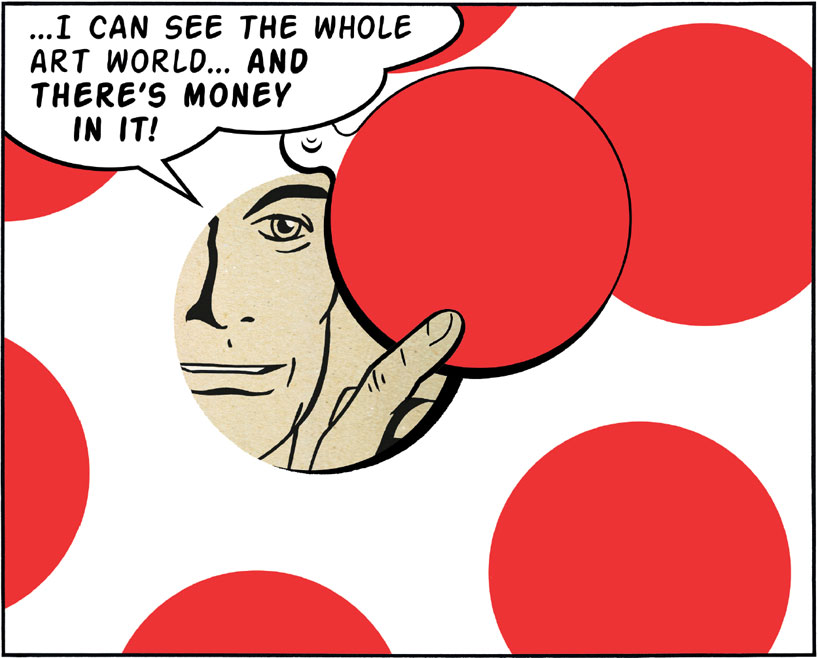 ‘the lone figure peers out from his low art world into a wealthy world of high art and ponders its possibilities.’carl flint after jack overgard 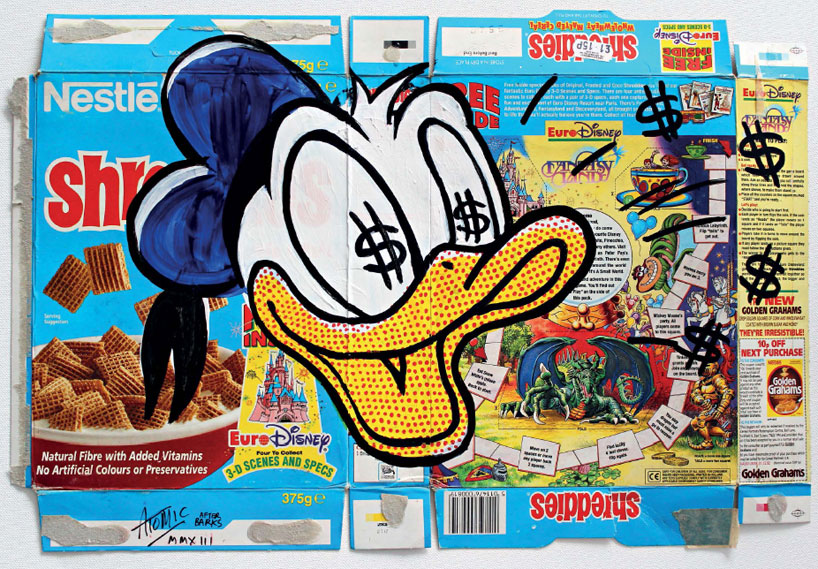 ‘when I saw lichtenstein’s paintings for the first time, I must admit I hated them. I was a 12 year-old bronze age marvelite at the time, and had been voraciously devouring american comics since discovering gold key’s tarzan 9 years before.

I liked the idea of putting comic art into a gallery, but couldn’t understand why roy’s stuff was executed so crudely and unsympathetically. the line weights seemed wrong and did not suggest the textures they were supposed to represent – hair and fire, for example, had heavier outlines than guns and telephones. it seemed like they had been done by someone clueless at best, disdainful at worst, of the subtleties of comic art.

it seems to me that lichtenstein was dismissive of his source material. the fact he never credited the artists whose work he re-appropriated backs up his hypothesis, and I fear this ham-fisted approach to pop art is one of the reasons the general public tend to underestimate the skill and craftsmanship of real comic book creators.

I really do like the idea of taking comic panels out of context and presenting them as massive paintings – I’ve done it myself on numerous occasions, most successfully with comics I designed myself, but even though I want to, I just cannot manage to like the work of roy lichtenstein. it’s great in theory; the critics make him sound amazing. but even at his best, I think he could have done much much better. if I was his art teacher I’d give him a (generous in my opinion) 5 or 6 out of 10 and a ‘try harder’. I would encourage him to spend more care over the linework and to maybe have a go at emulating some of the cool off-register effects that warhol excelled in. 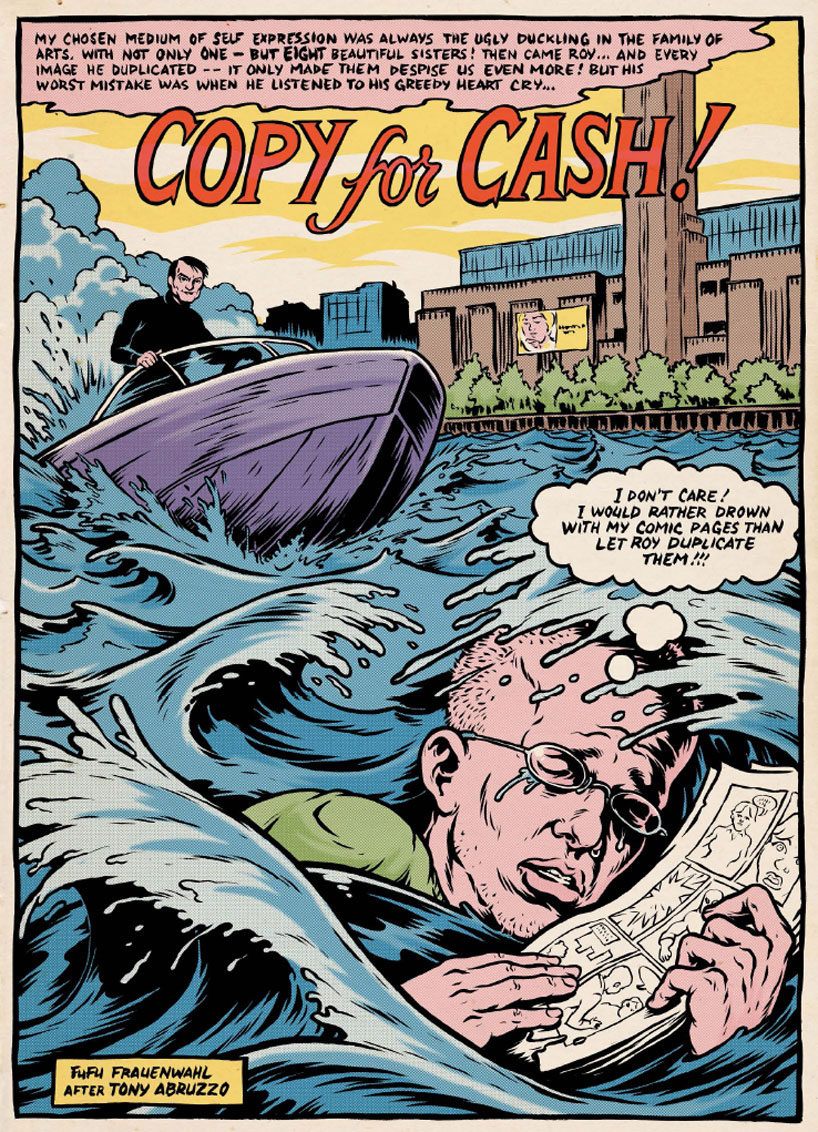 ‘this is a variation of the title page of ‘run for love’, from ‘secret hearts #83’, by tony abruzzo. roy lichtestein’s ‘drowning girl’ is a copy of the lower right corner of the page.

as with similar pages, abruzzo elegantly lays out the story to come in front of us, using only one carefully designed climatic image, a thought balloon, and a caption, while still leaving enough unsaid to spark the reader’s interest.

lichtenstein in turn, ignoring all the medium’s subtleties, truncates the contextually relevant elements and only uses the most flashy, iconic part of the page, in a way suggesting: ‘hey, it’s just a comic – the actual story is trivial anyway. here’s all you need to know!’

so, in this version the intention was to not only re-appropraite the drawing itself, but at the same time show that there’s a richer story behind it, both in terms of a possible comic narrative as well as the real history of how comic art has been treated by lichtenstein and other copyists.’ – fufu frauenwahl ‘there’s lots of talk about the ‘transformative power of art’, and how lichtenstein and modern appropriators like glen brown (turner nominee who enlarges and repaints work by SF artist chris foss and others) use this mystical power to turn base materials into high art. and dollars.

I imagine the artist in his studio preparing a panel from life, and working a real transformation on his models to turn them into the idealized brad and zsa zsa of romance comic cliché.

when I closely examined the work of tony abruzzo and others of his generation it forcefully brought home to me how gifted they actually were. with an absolute economy of the tony idealized reality, making women beautiful and men hunky. I think that’s actually one of the core attributes of cartooning / illustrating that i admire – this simplifying down to the essentials, removing the extraneous, seeing the ideal in the everyday.

by contrast, lichtenstein’s unfeeling and inexpressive mechanically-traced linework divests the image of its finesse, beauty and lightness of touch. he actually moves the characters in the opposite direction.’ – rian hughes 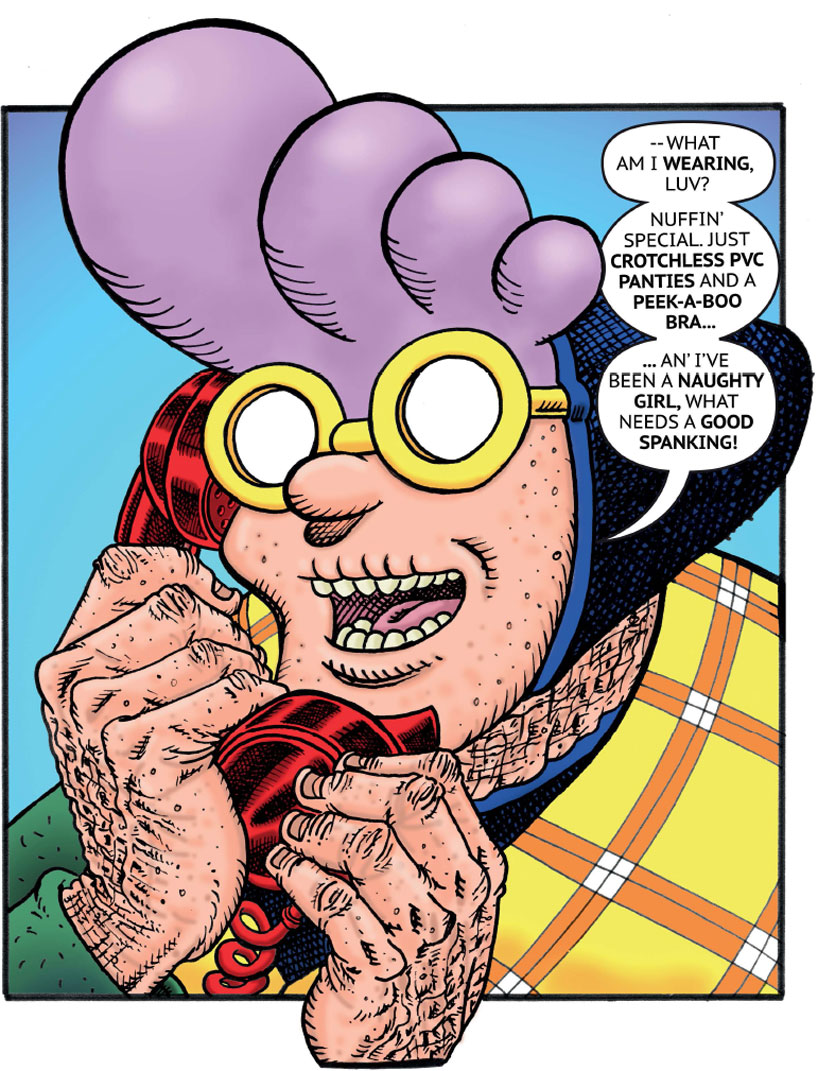 ‘tony abruzzo wasn’t as well known as his fellow artists but his work clearly inspired lichtenstein, who used several of tony’s panels as the basis for his paintings.

I chose his image because I could mine humour from it, and it once again arrived as a gag as soon as I’d seen the image.’ – david leach

‘for this piece I wanted to combine the inspiration of jerry’s original, but I also thought it important to steal something from roy in the process (without infringing copyright, of course). I also wanted to try to do something unique or not so directly copied, and move it into a simpler graphic interpretation more in keeping with my own personal visual way of working–to give it my own particular stamp rather than create another flagrant duplication or direct inferior copy.‘ – mark blamire