after much anticipation, the long awaited results of the designboom INFINITI curved visions competition–which asked participants to design a memorable experience in the form of spectacular or interactive digital or performance artworks, to be displayed in the new centers that thejapanese car company is opening throughout europe–have finally been announced.

they have selected the top six projects from more than 500 entries. now, it is up to the public to vote for their favourite project and determine who will win the grand prize of 10,000€.

you may vote here for your top choice–here is a look at the finalists: 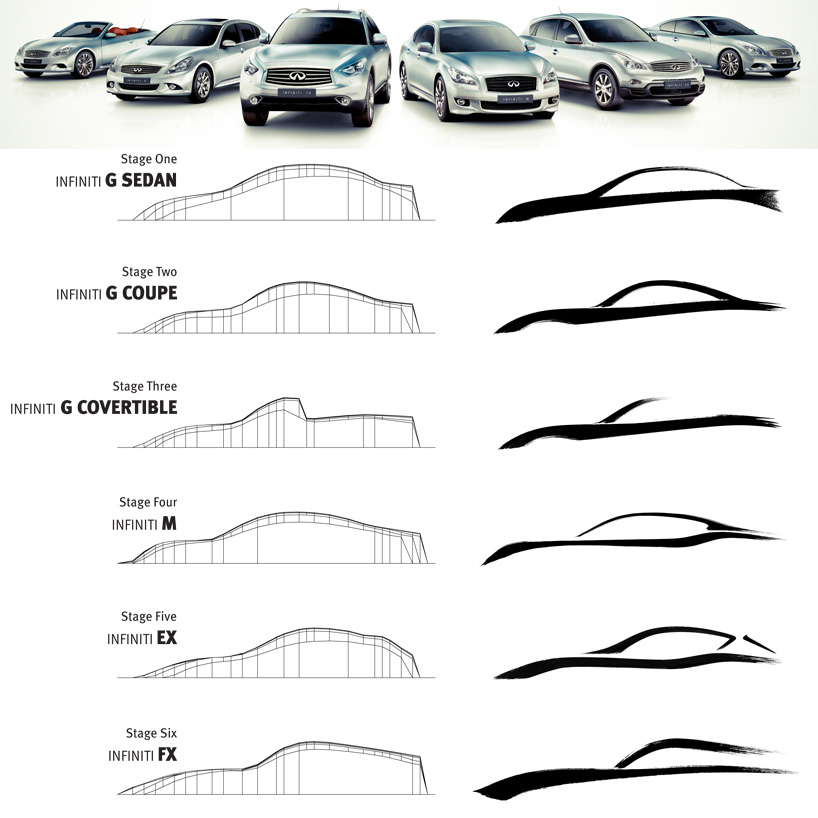 ‘silhouettes’ by jacobo blandón from colombia

‘silhouettes’ by jacobo blandón from colombia is an installation which is formed by a piece of canvas stretched across mechanical strutswhich raise and lower to create the outlines of the INFINITI car range.

I am an artist who is always looking to translate art in my daily life through the use of industrial design; I hold a firm belief that art should always be considered timeless. the canvas is tensioned by means of bars that stretch and contract, which together give shape tothe work; moving up and down (using the arduino servo system) they create varying heights and give form to the flexible material. the piece is accompanied by a dim light, projected onto the contracting surface to resulting in an even more dramatic effect on the canvas,which exhibits silhouettes of different INFINITI car models (EX, FX, G convertible, G coupe, G sedan, INFINITI M). 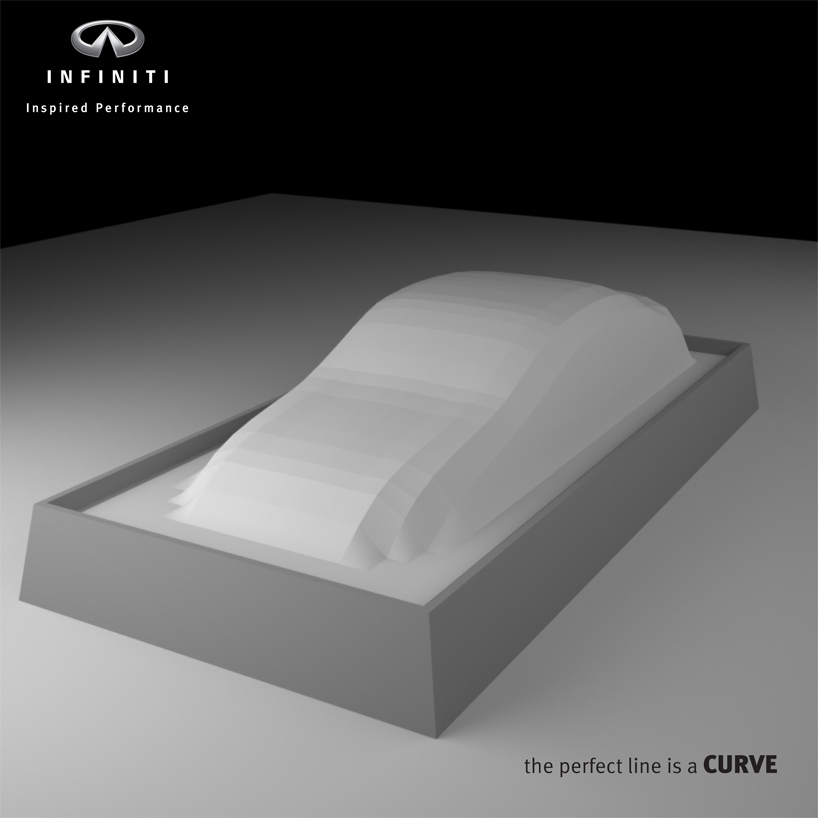 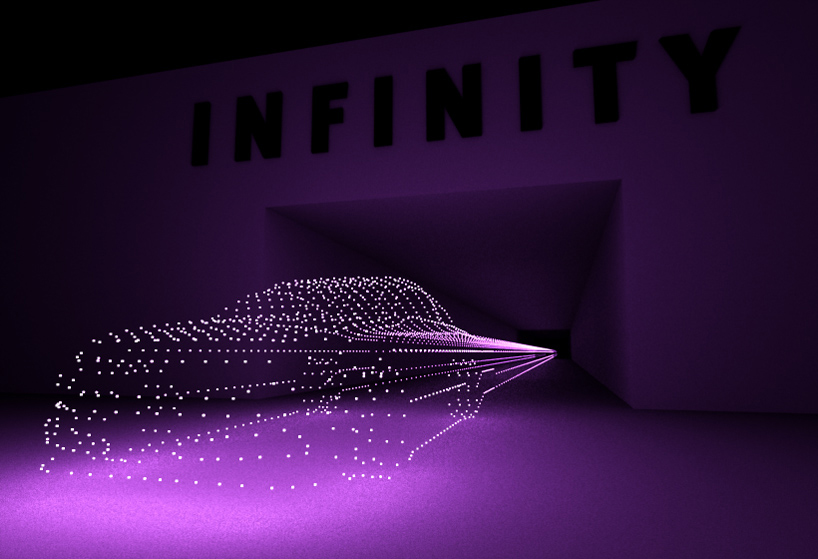 ‘infinity curves’ by adam rehak from the czech republic

‘infinity curves’ by adam rehak from the czech republic is an artwork in which the shell of a car is constructed by suspended LEDs,hanging in front of an infinite mirror, creating an optical illusion as if they are streaming away into the distance.the resulting visual draws on the effect you get when an autombile is captured on film, using a long exposure setting.

this installation consists of two core elements: the first one is the shape of the car which is made of LEDs hanging from the ceiling on thin black wires (or it could be possible to attach the diodes to wires standing on the ground). for parts of the vehicle like wheels, lights, etc., diodes with the ability to change the color could be used instead, this feature animating the sculpture for more visual impact;the second core element is an infinite mirror. it is a sandwich made of a semi-reflective mirror and a regular mirror. if you put a source of light between these two reflective surfaces ( in our case diodes ), it will be mirrored back and forth creating an illusion of infinite space.  if the regular mirror is slightly angled, it forms an impression of a giant curved tunnel. in the infinite mirror, there will be only one layer of the car, made of several LED diodes, the the resulting effect would appear as if thousands of these have been stacked one after another. the overall impression should be an illusion of infinite strings of diodes that form into a car in front of the viewer. 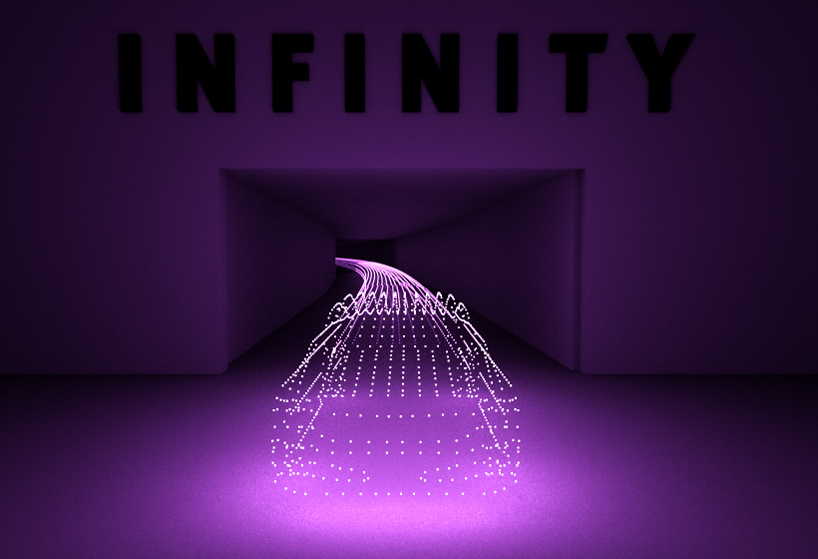 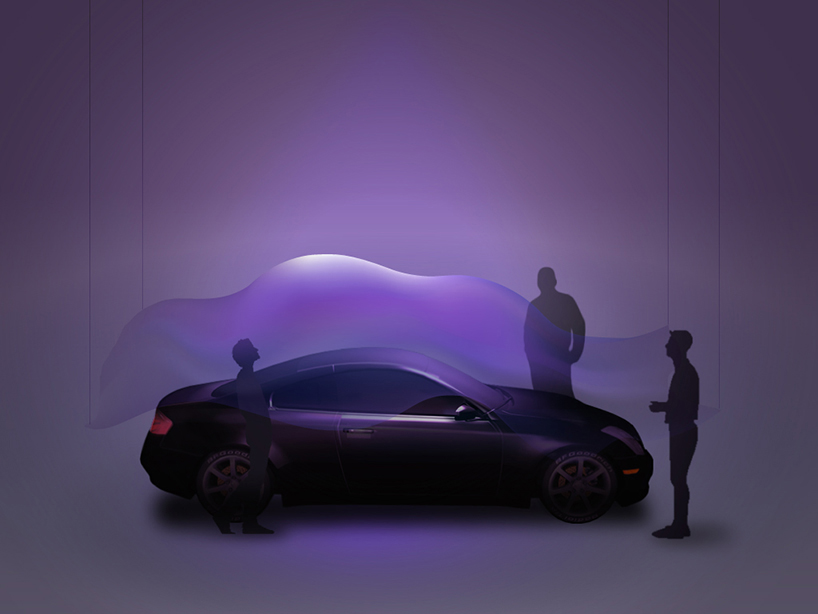 ‘perpetual curves’ by sang jun yoo from USA is a wind-activated installation which is composed of a sheer fabric curtain, kinect sensor and an INFINITI car.

the piece focuses on interpreting the curves of an INFINITI car and aims to visualize what makes its lines graceful and powerful. the curves on the moving curtain helps the viewers experience an invisible force that drives itself into the installation space. experiencing the work is meant to elicit an emotional response. the viewers are able to be immersed in the ‘curved vision’, discovering their own perspective in between the perpetual movement of meandering lines. the fabric wall can be approached directly from both sides, offering increased spatial interactivity. by touching the lights on the moving drape suspended over the car, individuals can change the curves and the color spectrum, which also illuminate the car’s body. 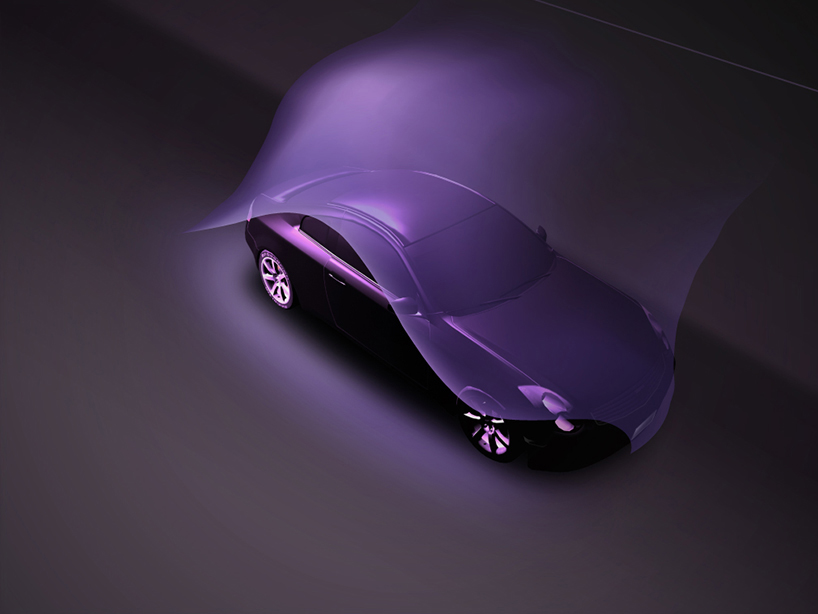 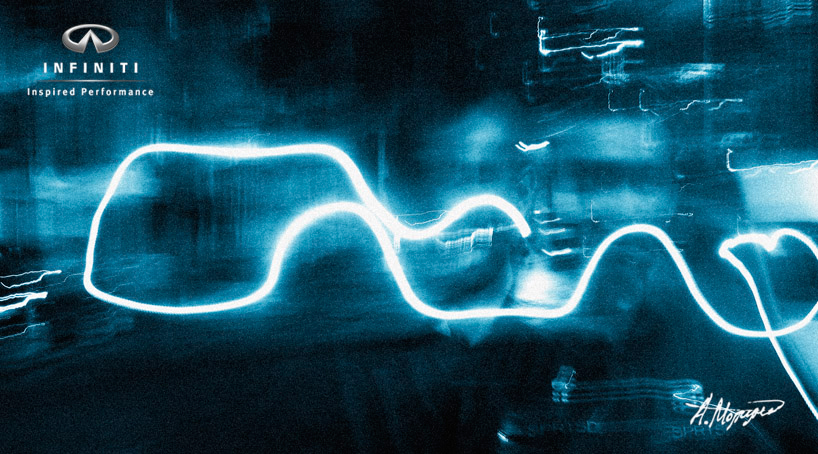 ‘curves for INFINITI’ by alex morgun from ukraine

‘curves for INFINITI’ by alex morgun from the ukraine invites visitors to INFINITI showrooms and other international events to ‘become part of the performance’. his interactive installation employs techniques similar to that of light painting, summoning individuals to create their own unique ‘curve’ for INFINITI.

‘curves for INFINITI’ is an opportunity for different people to create their own outline of a car for the japanese company. each line is unique, conveying the character of the vehicle. the influences behind this piece are derived from various contours which fuel emotions. a straight line is connected to points at sharp angels creating a certain tension; whereas a curved line is like a breath of fresh air and freedom, along with a sense of peace. as an artist I believe that creation is inherent in human nature, this is what drives me in the work I do and makes me happy. 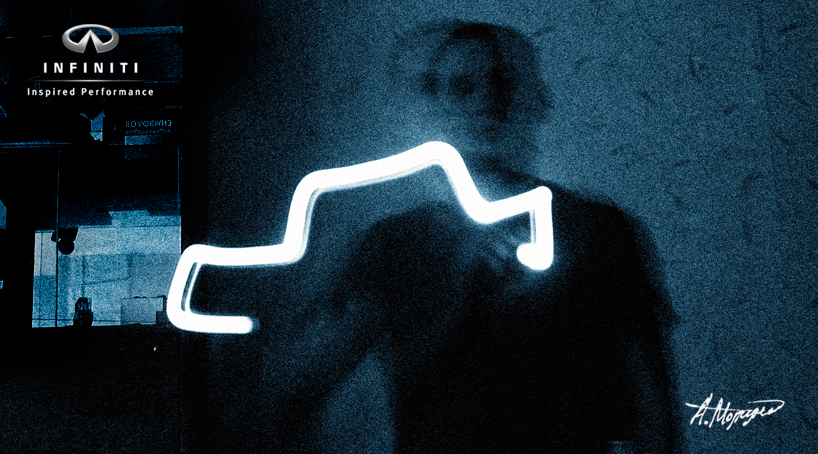 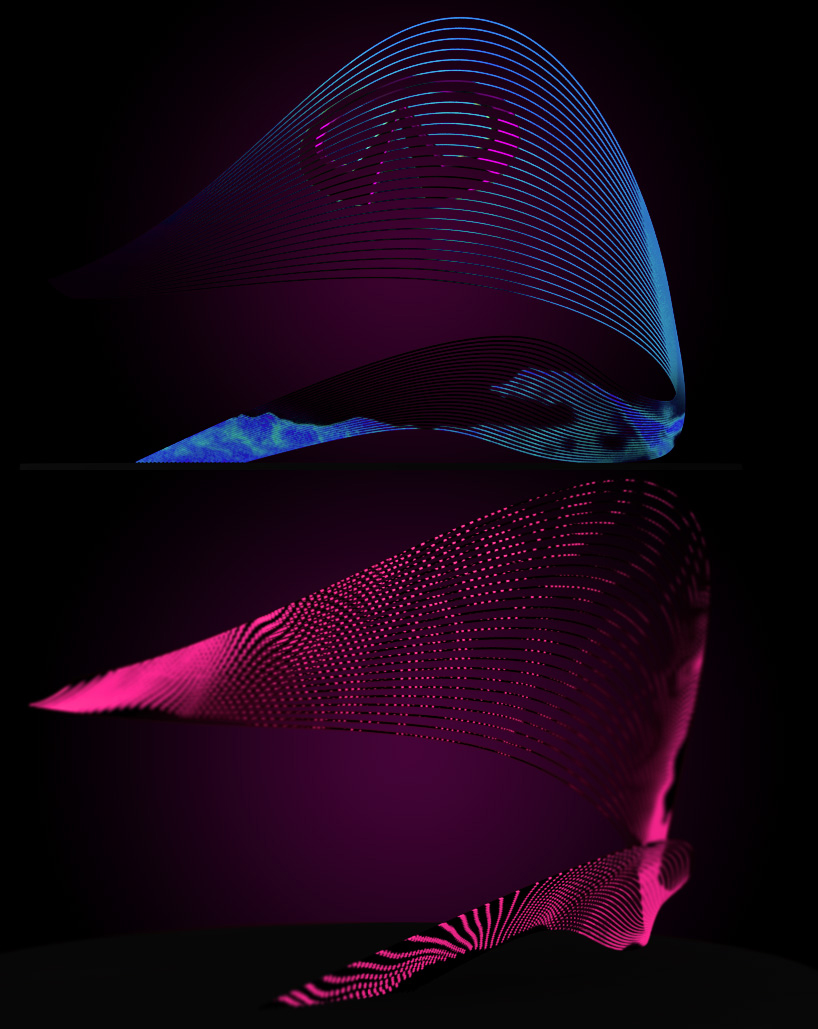 ‘curved splash’ by ivelin atanasoy from bulgaria is a sculptural installation which symbolizes the physical and dynamic interactions of the automobile in relation to nature.

the size, shape and material which ‘curved splash’ is comprised of makes it suitable for interior and exterior–presented as both a standalone form and as a 3D mapping object. the large work is made from brushed aluminium,welded at the places where the curves are based, making it stable, despite the illusion that it is levitated in space.the applied technology is 3D CAD which is used to prepare the CNC cut elements, in which aluminium stringsare bent and welded to them to create the overall visual effect of the curved structure. 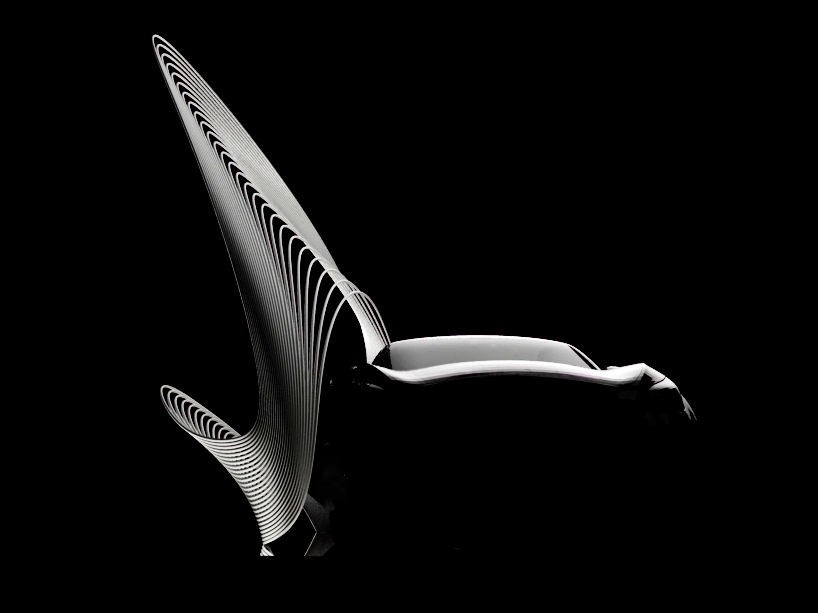 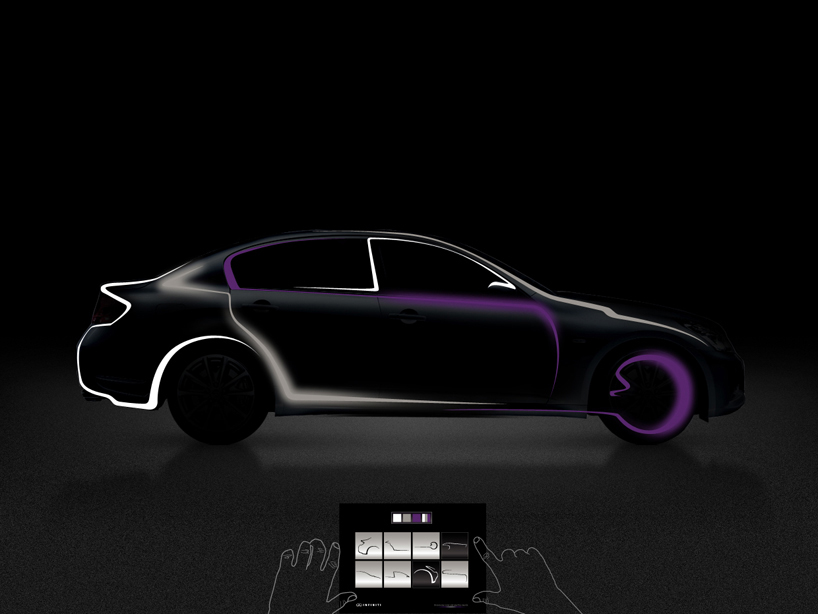 ‘discover infinity by sound’ by marko blagojevic from serbia

‘discover infinity by sound’ by marko blagojevic from serbia explores the origins of lines using animation–projection and an app-like interface–allowing users to interact with the piece itself.

how does it work? one sound, one curve! full control is gained through complementing parts: 1) INFINITI car placed in space; 2) video projector for 3D mapping and animated images; 3) a tablet used as a remote controller; and 4) tablet application is placed at the heart of installation. my approach was influenced by the curved lines of the INFINITI range itself. from here I decided to explore the origins of these using animation, with particular focus on the sounds suggested by the vehicle itself: unlocking the door, starting an engine, subtle sound of a window sliding down, etc. once the user hits the application button sound is played. lines follow the flow of this aural experience which are directly derived from the exterior shape of an INFINITI car. by using a tablet as a musical instrument, one can create an authentic real time animation followed by associated car noises, as well as choose colors–white, silver and purple, or mix of all three– to accompany these curves. 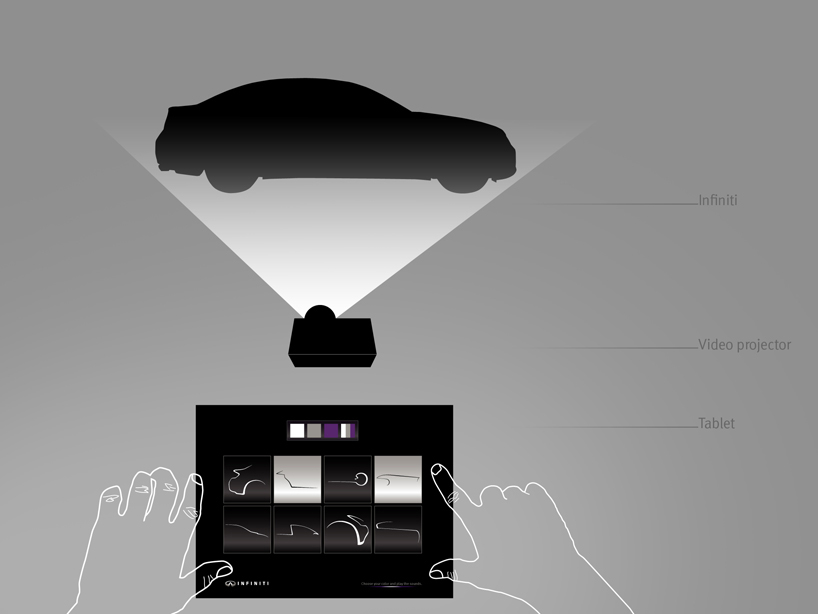 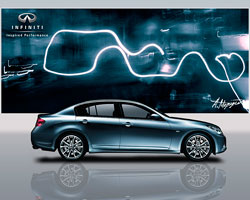 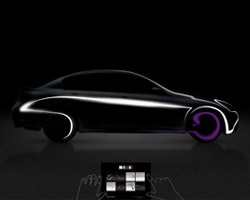