this year, nearly 100,000 men, women and children from war-torn countries have fled their homeland, walked through entire cities and traveled by rubber boats across the aegean sea to land in the greek island of lesbos. wanting to give outsiders a glimpse at the daily lives and struggle of these displaced individuals, the international rescue committee, an organization that helps people whose livelihoods are shattered by conflict and disaster, have documented photos for the series ‘what’s in my bag?’. together with photographer tyler jump, the IRC have asked asked a mother, child, teenager, pharmacist, artist, and a family of 31 to share the contents of their baggage and show what they’ve managed to hold on to. their possessions personify the stories about their history, family and their hopes for the future.

a child: little omran, sporting a cheerful blue shirt, is on his way to germany with his extended family of five to live with relatives. because his parents knew they would travel through forests to avoid detection, they made sure to pack bandages for scrapes and cuts. 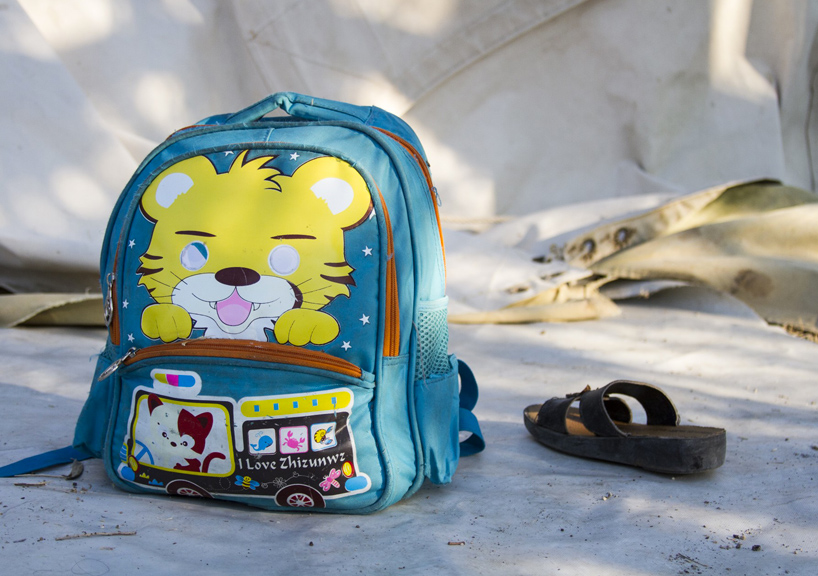 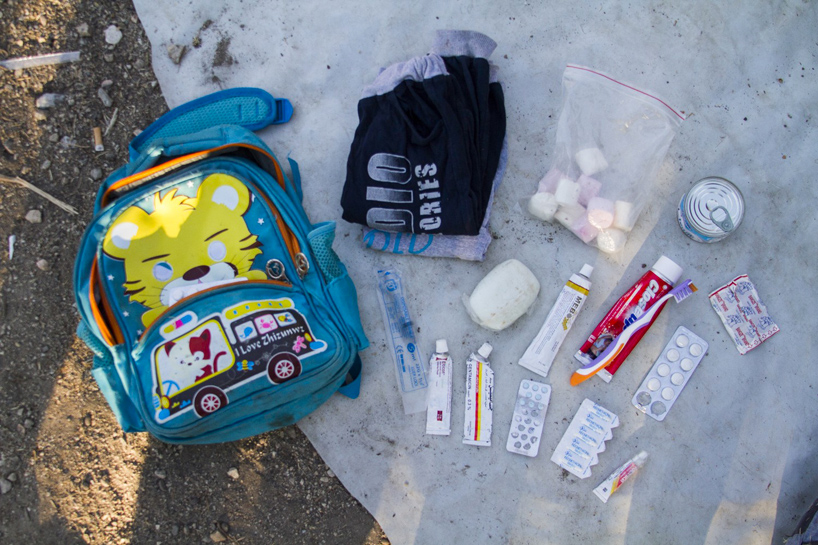 a mother: when vicious fighting erupted in yarmouk, an unofficial camp for palestinians just south of the syrian capital, aboessa managed to escape with her husband and their 10-month-old daughter, doua. after crossing the border to turkey, they spent one week sheltering in another forlorn camp before jumping into a rubber raft bound for the safe shores of europe. the turkish police patrolling the coast stopped them and detached the boat’s motor in order to force them to turn back, but the refugees kept going, steering the boat through the sea’s strong currents with makeshift paddles.

‘everything is for my daughter to protect her against sickness. when we arrived in greece, a kind man gave me two jars of food. another man gave us biscuits and water when he saw my baby.’ 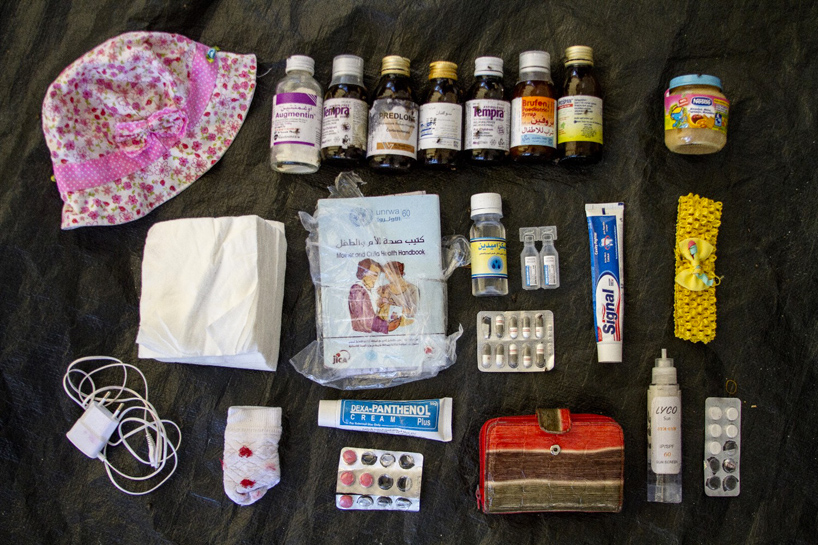 hat for the baby
an assortment of medication, a bottle of sterile water, and a jar of baby food
a small supply of napkins for diaper changes
a hat and a pair of socks for the baby
assortment of pain relievers, sunscreen and sunburn ointment, toothpaste
personal documents (including the baby’s vaccination history)
wallet (with photo ID and money)
cell phone charger
yellow headband

a teenager: iqbal dragged his weary body out of the boat with only a backpack. the teenager had traveled hundreds of miles and dodged bullets to escape from the warring province of kunduz in northern afghanistan, fleeing east to iran, then traveling by foot to turkey. now in lesbos, he’s uncertain of where to go next. he has kept in touch with a friend who already made the journey to germany. he has a brother studying in florida.

‘I want my skin to be white and hair to be spiked — I don’t want them to know I’m a refugee. I think that someone will spot me and call the police because I’m illegal.’ 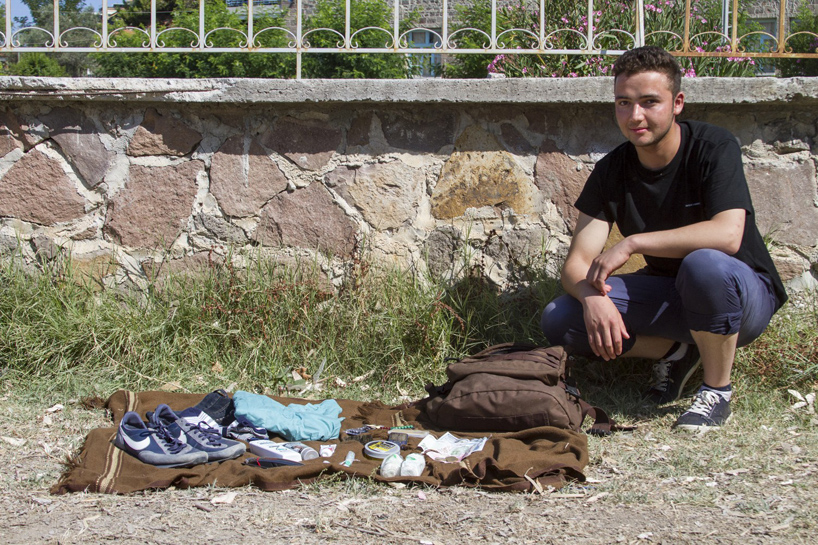 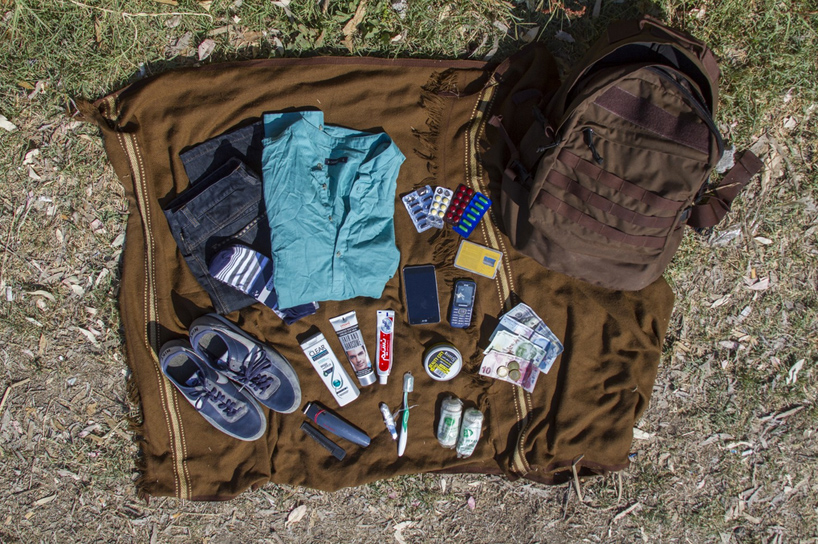 a family: this family lost everything. when they left syria, each member took one to two bags. during the course of the journey to turkey and then greece, their boat began to sink. there were seven women, four men and 20 children. they managed to salvage just one bag among them.

‘I hope we die. this life is not worth to live anymore. everyone closed the door in our face, there is no future.’ 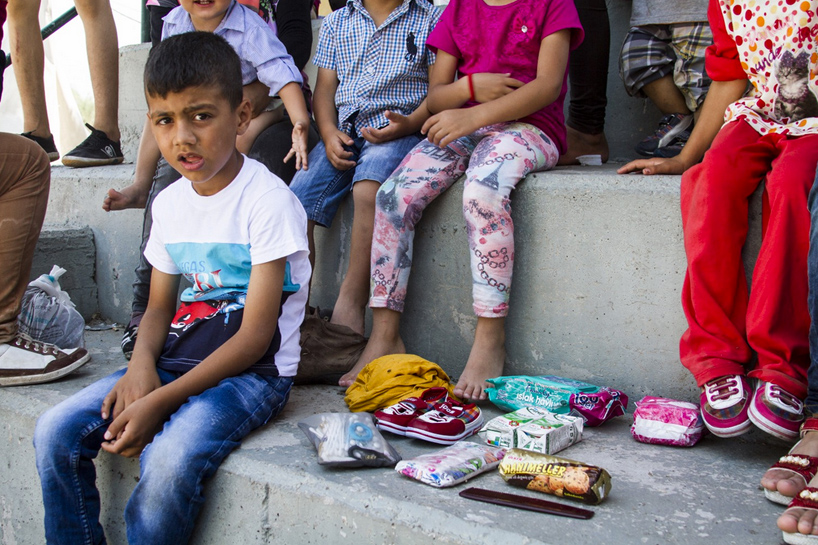 a family — from: aleppo, syria 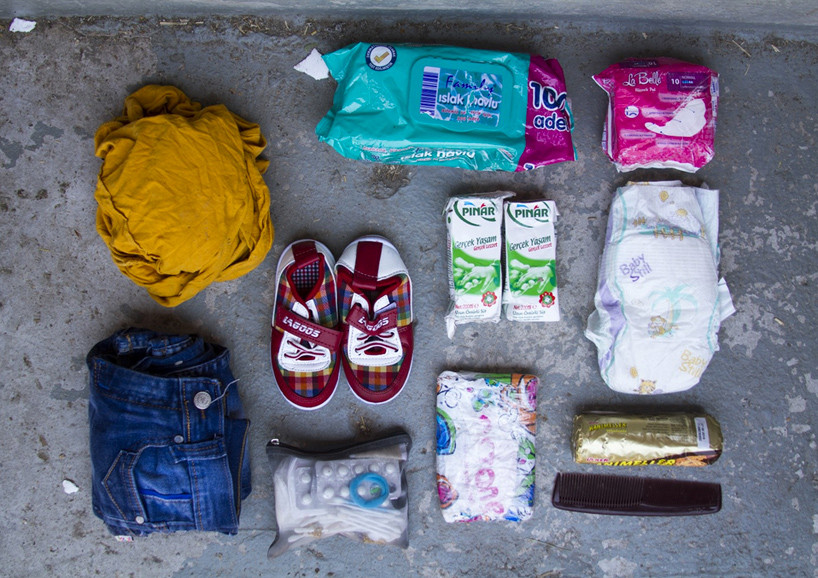 an artist: nour has a passion for music and art. he played guitar in syria for seven years and painted. as bombs and gunfire echoed in the distance, nour grabbed the items closest to his heart before leaving for turkey — things that today evoke bittersweet memories of home.

‘I left syria with two bags, but the smugglers told me I could only take one. the other bag had all of my clothes. this is all I have left.’ 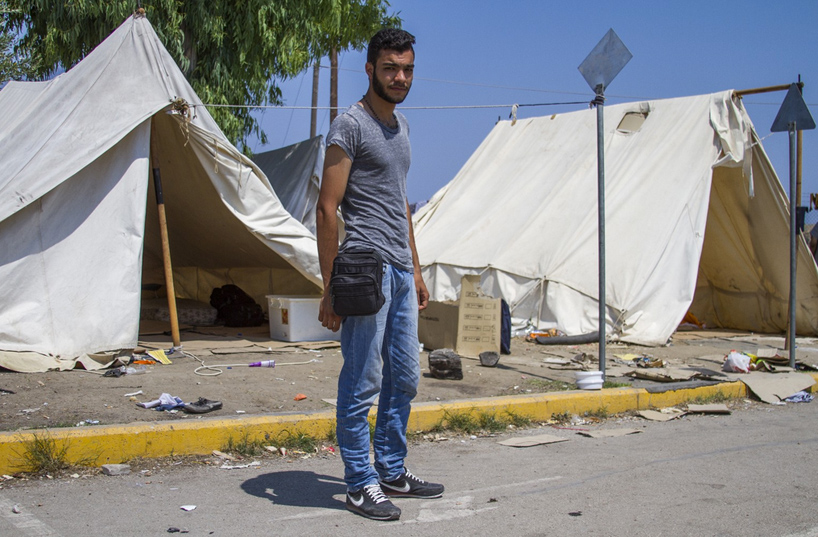 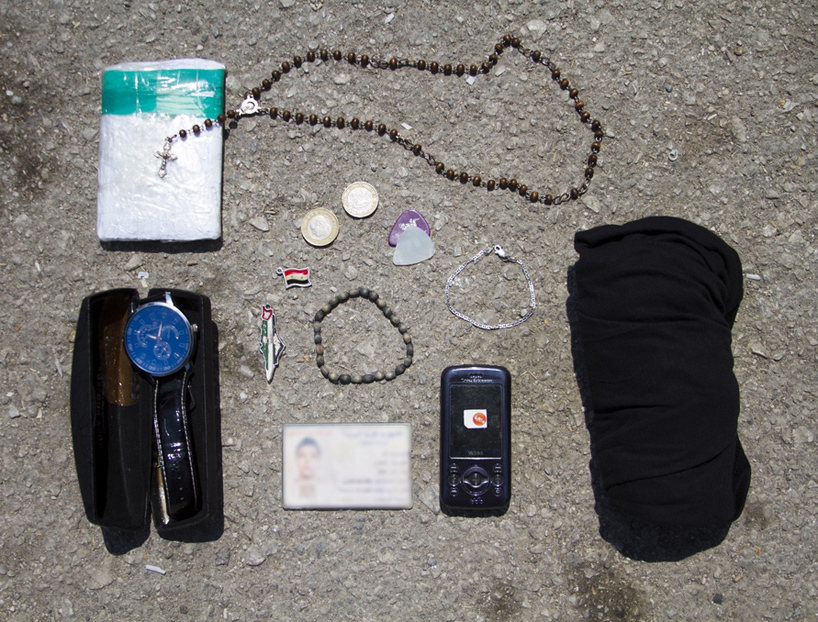 small bag of personal documents
a rosary (gift from his friend; nour doesn’t let it touch the floor)
a watch (from his girlfriend; it broke during the journey)
syrian flag, palestinian charm, silver and wooden bracelets (gifts from friends)
guitar picks (one also a gift from a friend)
cell phone and syrian sim card
photo ID
1 shirt

a pharmacist: when war broke out in syria, the pharmacist’s father would recall fond memories of germany, where he lived for eight years while practicing medicine there. the pharmacist wanted a similar life of peace and hope. he fled with his family to turkey, where he met a smuggler who arranged his trip to europe. with one bag strapped across his chest, the pharmacist climbed into an overcrowded dinghy with 53 others, including a handful of young children. miraculously, the group made the crossing safely until, near the shores of greece, they were met by the coast guard, shouting at them to stop the boat.

‘I had to leave behind my parents and sister in turkey. I thought, if I die on this boat, at least I will die with the photos of my family near me.’ 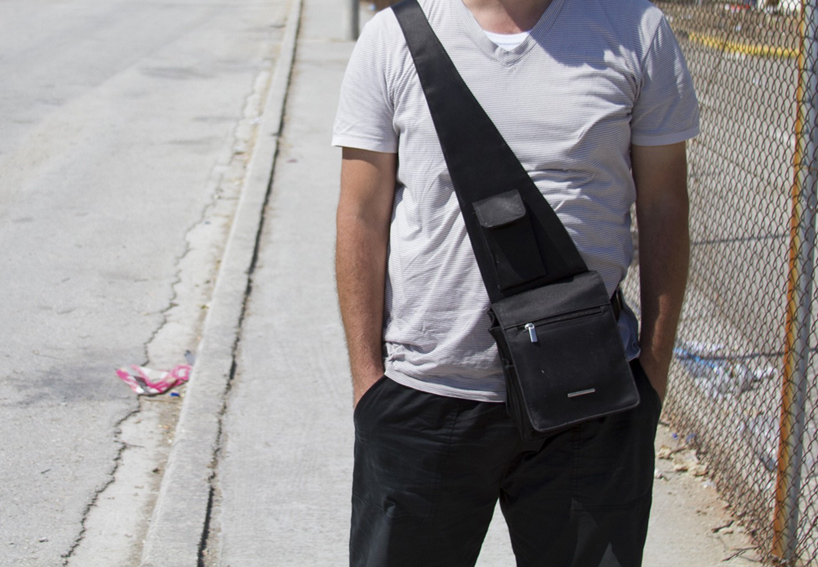 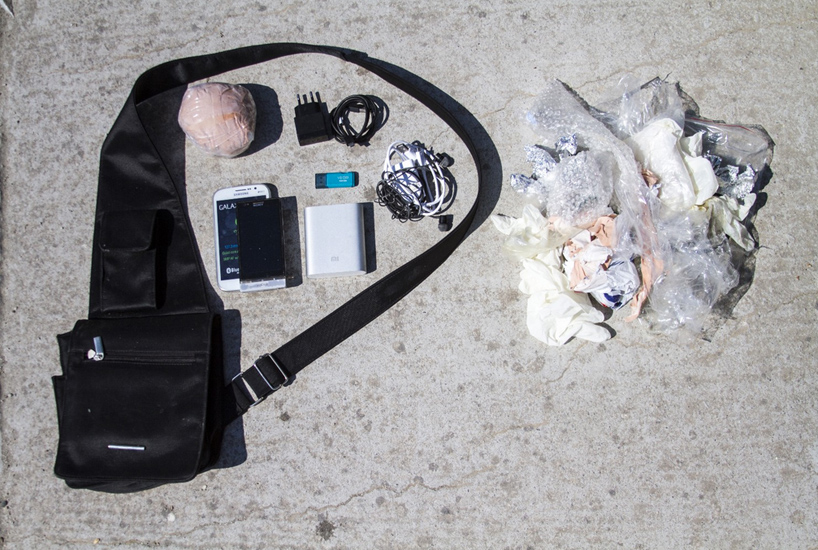 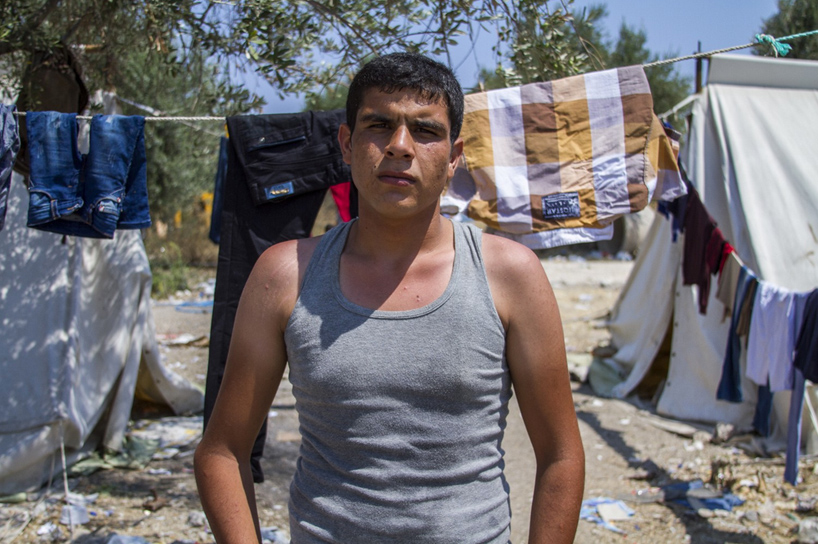 ‘this is all I have. they told us we could only bring two things, one extra shirt and pants.’

*last names omitted to protect the privacy of those interviewed