the first edition of the helsinki biennial is opening to the public on june 12, running over the summer until september 26, 2021. the biennial brings contemporary art to the former military island of vallisaari in the helsinki archipelago, with further artworks scattered across the city’s mainland. using the context of the island’s unique cultural history and natural environment as a starting point, artworks have been created for specific locations — with some activating former gunpowder cellars and old residential buildings. titled the same sea, the helsinki biennial presents 41 artists and collectives from finland and beyond. more than half of the works are new commissions and site-specific installations that engage with the history, geopolitical location, and diverse environment of vallisaari.

curated by pirkko siitari and taru tappola, head curators of helsinki art museum (HAM), the same sea reflects upon the ever-pressing notion of interdependence. ‘the pandemic has shown us in a concrete way that everything is interconnected and dependent on one another,’ pirkko siitari and taru tappola tell designboom in an interview. ‘it is a symptom of environmental crisis and our problematic relationship with nature. also, following a year in which the immediacy and the physical aspect of art has been taken away, and people have been totally separated from one another, we feel the themes of the biennial now carry even more of a profound meaning.’ 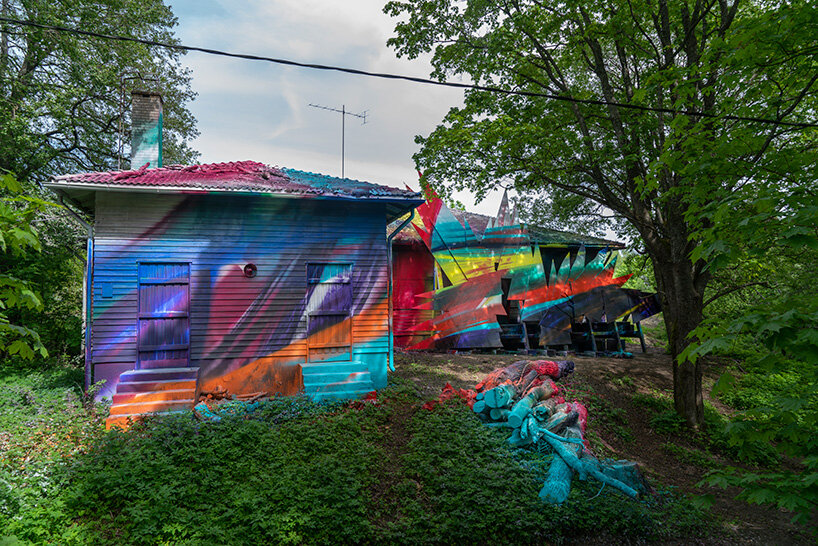 the desire for togetherness and empathy are central to the work of many biennial artists, with numerous sites on vallisaari also incorporated into the artworks themselves. dafna maimon leads visitors through a cellar vault, which has been transformed into a digestive system, while artist tuomas a. laitinen has created an alien habitat in a former gunpowder cellar. meanwhile, sitting atop a former elevator shaft, tadashi kawamata’s vallisaari lighthouse offers a temporary, towering landmark comprised of found scrap material sourced from the island, which can be seen from various viewpoints at sea, the neighboring UNESCO heritage island of suomenlinna, and the helsinki waterfront.

greeting visitors as they arrive on the ferry from mainland helsinki is jaakko niemelä’s installation quay 6 constructed from scaffolding. reaching six meters in height, the artwork mirrors the projected rise in sea level should greenland’s northern ice sheet vanish completely. on the eastern side of the island, alicja kwade’s big be-hide is sited on a thin strip of land that connects vallisaari island with the neighboring kuninkaansaari island. the sculpture comprises two stones — one from vallisaari and the other a man-made replica — on either side of a mirror, highlighting the continual transformation of the natural world. 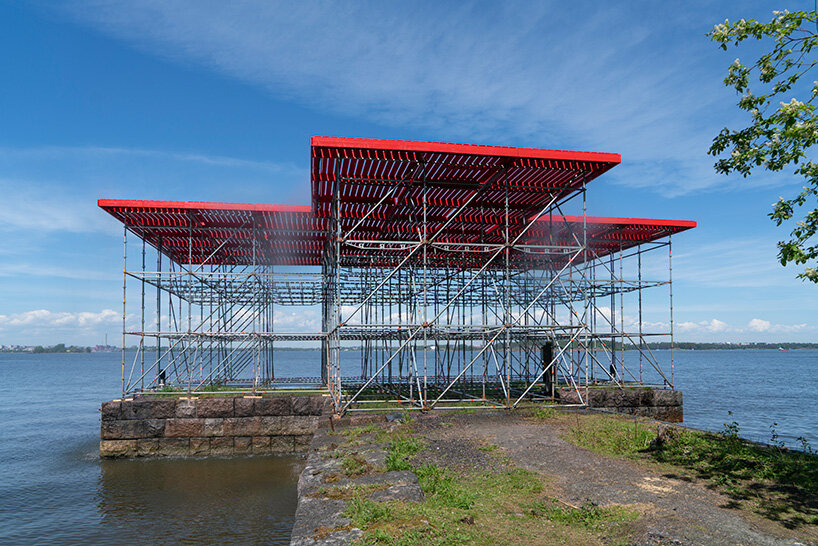 to learn more about the inaugural edition of the helsinki biennial, designboom spoke with pirkko siitari and taru tappola, who discussed the context of vallisaari island, approaching the selection of artists as a puzzle, and some of the highlights visitors can look forward to. 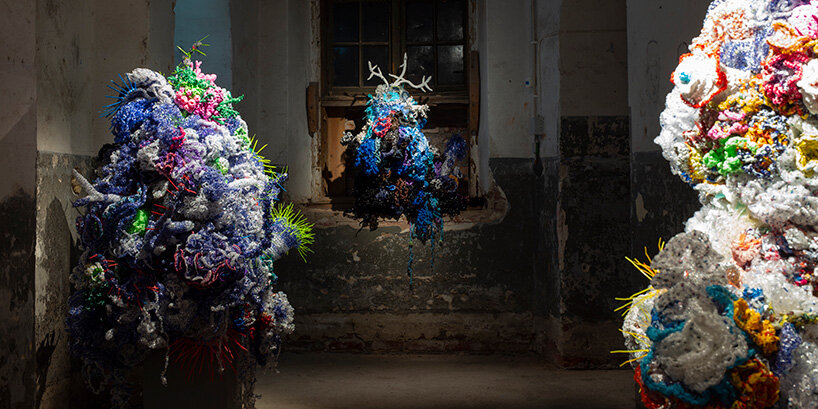 designboom (DB): over the challenges of the last year, have there been any positive takeaways, renewed perspectives, or new understandings about the art viewing experience that the helsinki biennial will carry into the program?

pirkko siitari + taru tappola (PS + TT): at its core, the curatorial concept for the first edition the same sea is based on a principle of interconnectedness. it is manifested in the many different themes that the artworks explore. the pandemic has shown us in a concrete way that everything is interconnected and dependent on one another. it is a symptom of environmental crisis and our problematic relationship with nature. also, following a year in which the immediacy and the physical aspect of art has been taken away, and people have been totally separated from one another, we feel the themes of the biennial now carry even more of a profound meaning. in practical terms, one outcome of the pandemic is that we have increased our digital initiatives, enabling the biennial to be more accessible for those unable to physically visit helsinki. 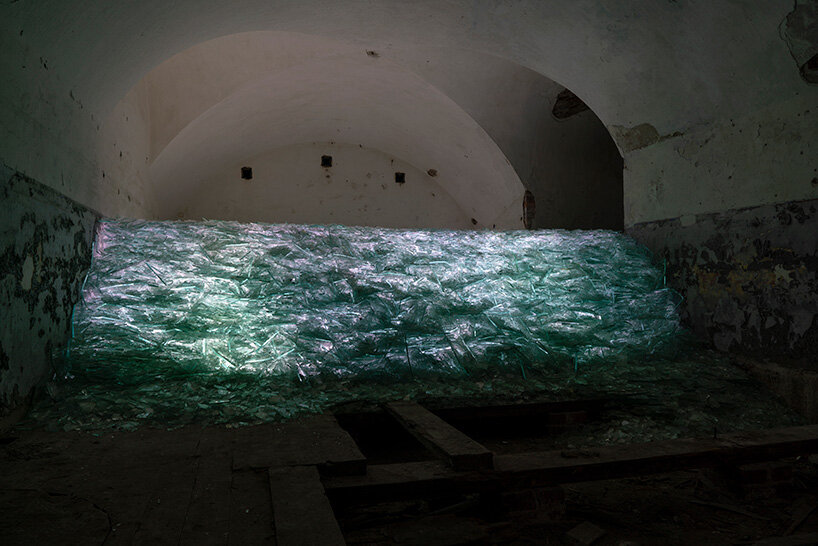 DB: can you briefly introduce the theme of this inaugural edition? what are the primary issues it confronts?

PS + TT: as touched on above, the title for our inaugural edition is the same sea, which is a metaphor for interconnectedness and the interdependence caused by it. we feel that these are central conditions of being in the world. in the specific context of the biennial’s location, vallisaari island, these notions become visible in the individual themes of the artworks, which include relationships with nature, borders and identities, time and change, connection and empathy. additionally, the same sea as a metaphor gestures to its maritime location and wider global concerns. we live by the shores of the same sea, but it behaves differently in different places and situations. for us, this speaks directly to the conditions of the earth’s current ecological crisis, emphasizing the interconnectedness of our ecosystem and how this implicates every living thing. we ultimately believe that art has an important role to play in opening channels for discourse, empathy and ecological ethics. 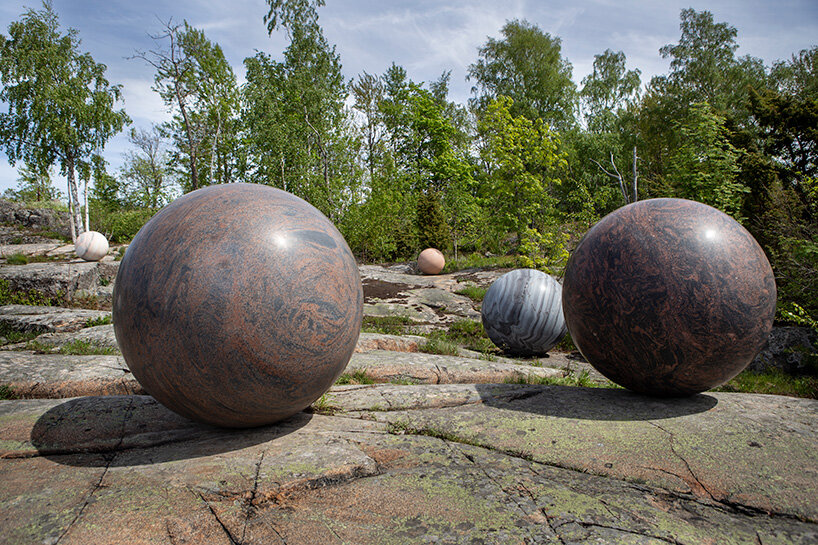 DB: how does the helsinki biennial engage with, and reflect on, the unique history and surroundings of vallisaari island?

PS + TT: the biennial is truly rooted in its location; vallisaari has informed both the tangible and conceptual starting point for our curation. some artists have chosen to focus specifically on the lives of the island’s former inhabitants and the island’s history, such as inga meldere, who digs into the memories of former inhabitants, or jussi kivi, who imagines both the history and the future of the island, or marja kanervo, who makes poetic interventions with the traces of life in the abandoned residential buildings.

PS+TT (continued): the military history of the island has inspired artists like baran caginli and maaria wirkkala. some artists like teemu lehmusruusu or the artist colletive attakwad have been inspired by the nature of the island. other artists have used this unique setting to dwell on broader questions around time and change, the relationship between people and other species, and the micro and macro worlds that remain outside of normal observation. therefore, we hope the biennial is simultaneously grounded in the local whilst maintaining a truly global outlook. meiju niskala, it occurred to me, but a bit too late, 2021 © maija toivanen/HAM/helsinki biennial 2021

DB: what was the criteria in selecting the artists and artist groups to exhibit? how do their international voices contribute something different to the conversation?

PS + TT: we approached the selection of the artists as a puzzle: you start from one piece, and continue building the whole piece by piece, artist by artist. the selection is based on individual artists who we were sure could respond to the specific environment of the island. it has also been a collective and iterative process, in dialogue with the artists, our curatorial team, and the island itself. while our curating was not based on national representation, this biennial includes many artists based in finland but also a plethora of international names spanning australia, cambodia, germany, india, japan, kenya, latvia, poland, south korea, thailand, turkey, the UK and the USA. this diversity helps to create a multifaceted dialogue, opening up new perspectives and connections.

DB: the biennial presents over 75% new commissions and site-specific works — what are some of the highlights visitors can expect to look forward to?

PS + TT: there are countless highlights, so it would be difficult to select just a few! however, we are particularly delighted that local and international artists have welcomed collaborations with the city’s communities, including margaret and christine wertheim’s ‘helsinki satellite reef’ crafted together by over 3000 helsinki residents, from schoolchildren to care home residents, as well as paweł althamer’s documentary and VR film ‘seven prisoners’, produced with the nearby suomenlinna open prison. leaving a lasting legacy of contemporary art on the mainland, a number of biennial artworks – including 2021 sculptures by alicja kwade and laura könönen – will become permanent features of the city’s public art collection. 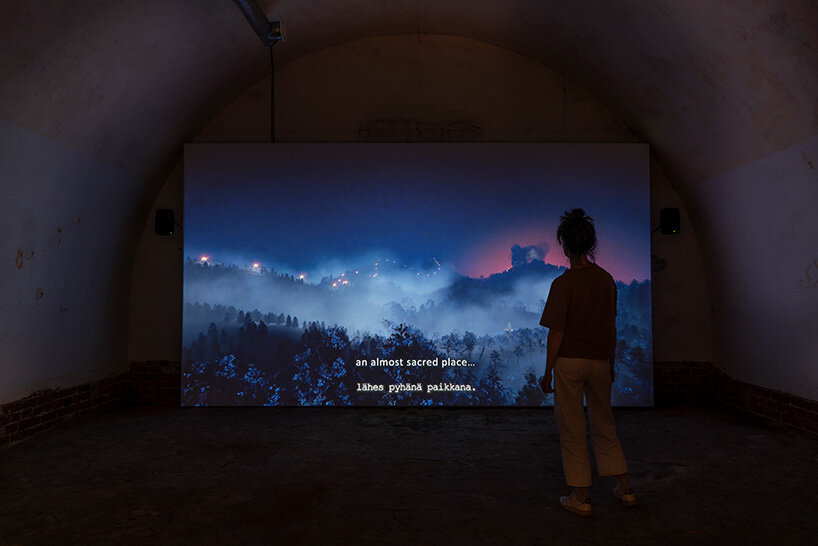 DB: how can remote audiences engage and interact with the exhibition from home?

PS + TT: one of our key guiding principles is that helsinki biennial invites all. just as the physical biennial takes place in open, public spaces across vallisaari and the mainland to promote accessibility, we also want to increase inclusivity by utilising the digital realm. we are creating additional content such as video interviews with artists, recordings of performances, and some digital artworks will be available on the biennial website. there is also a virtual reality experience, which allows viewers to be transported to vallisaari without actually travelling to helsinki. given the incredible growth of innovative digital initiatives over the past year, we are cognisant of taking an integrated approach to building our community online as well as amongst our visitors on the ground. 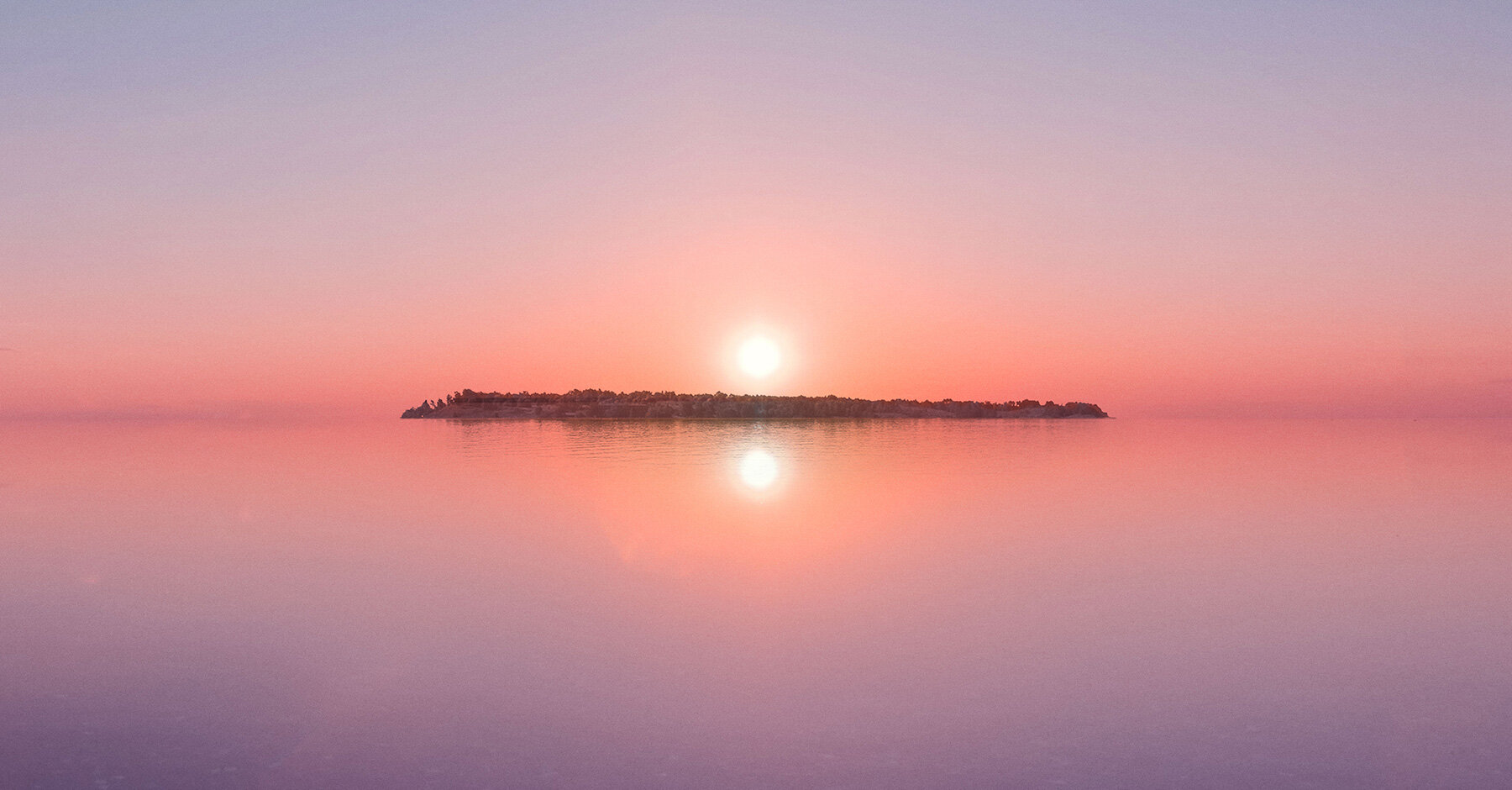 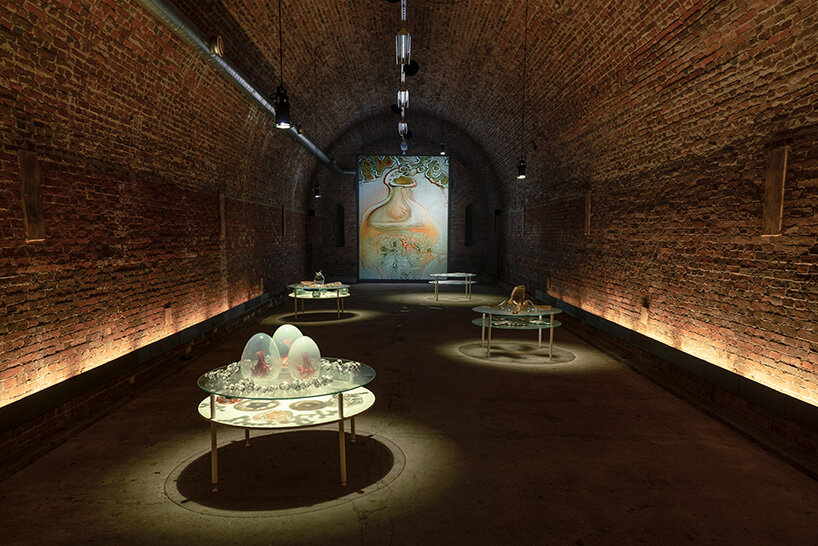 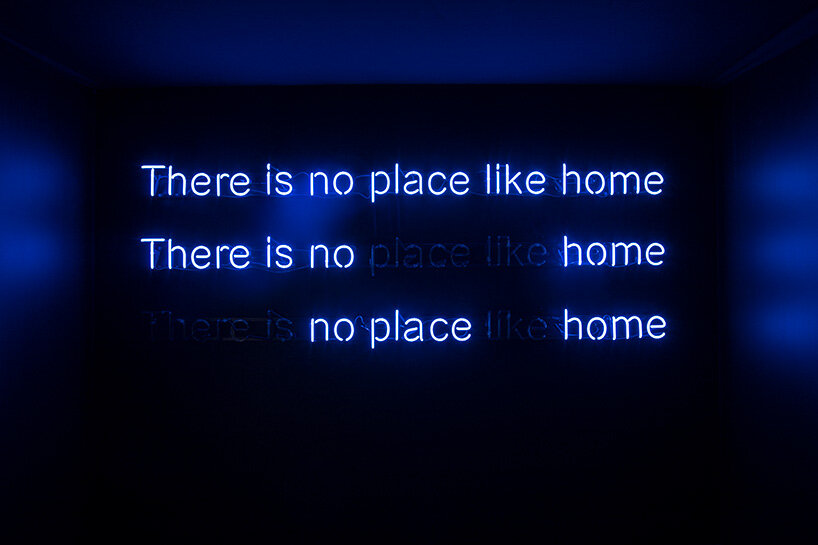 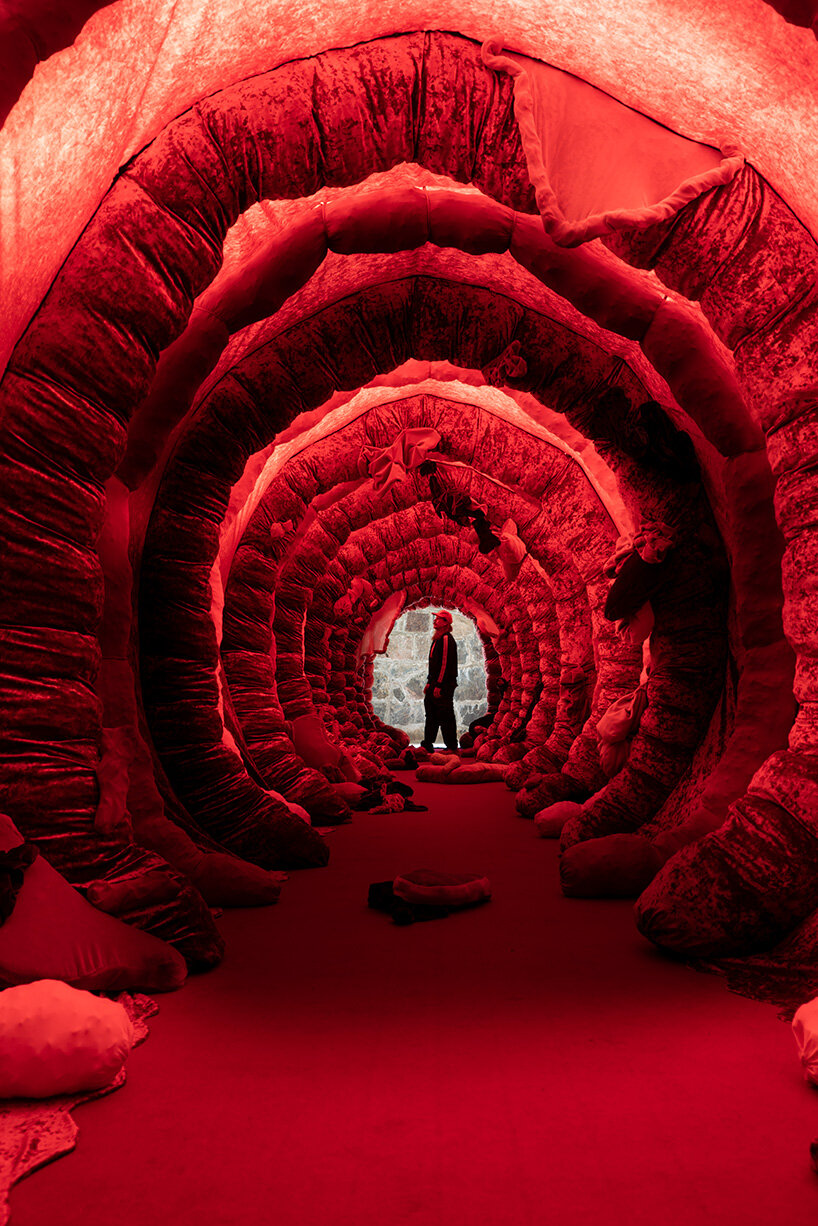 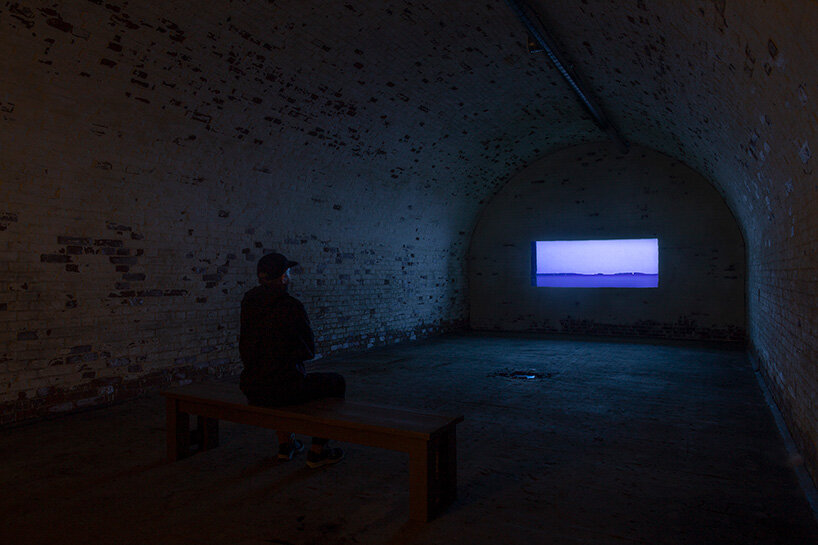 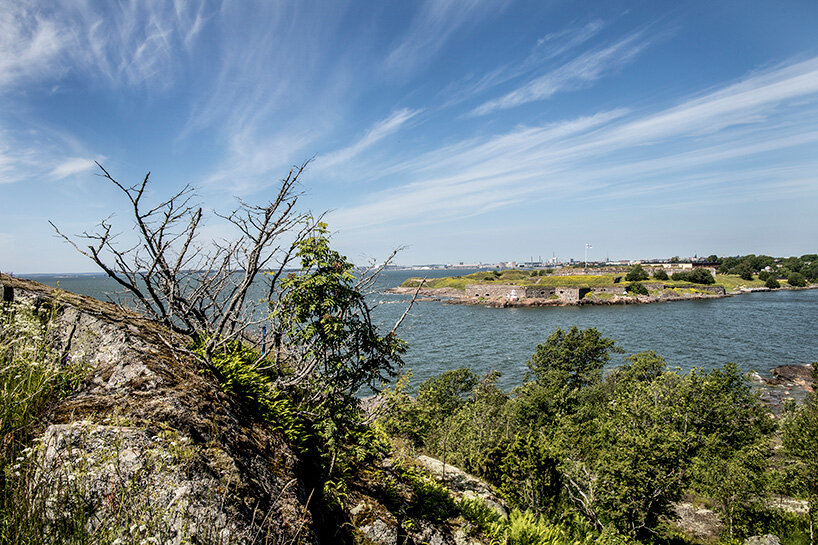 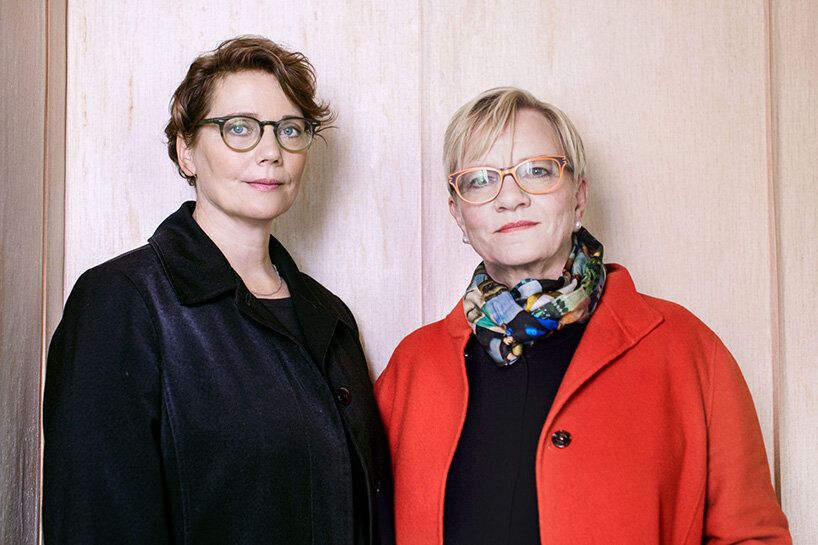 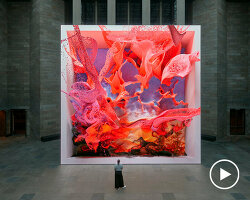