tomi ungerer’s ‘a treasury of 8 books’ is a compilation of eight classic picture stories and behind-the-scenes material by the celebrated french author-illustrator. with a slipcased hardback, the book unites some of his most successful and popular tales, including ‘the three robbers’, ‘moon man’ and ‘otto’. furthermore, these are joined by a few of his acclaimed recent works like ‘fog islands and the lost gems’; ‘zeralda’s orge’, ‘flix’, ‘the hat’ and ‘emile’.

the momentous compendium book has been printed by phaidon, the global publisher of the creative arts, and is available now. to mark the launch of the new piece, designboom met with tomi ungerer in london. during this exclusive interview, tomi discusses the meanings behind the characters of his children’s books, how he sources new story ideas, and what it means for him to have phaidon publish his work in the UK. 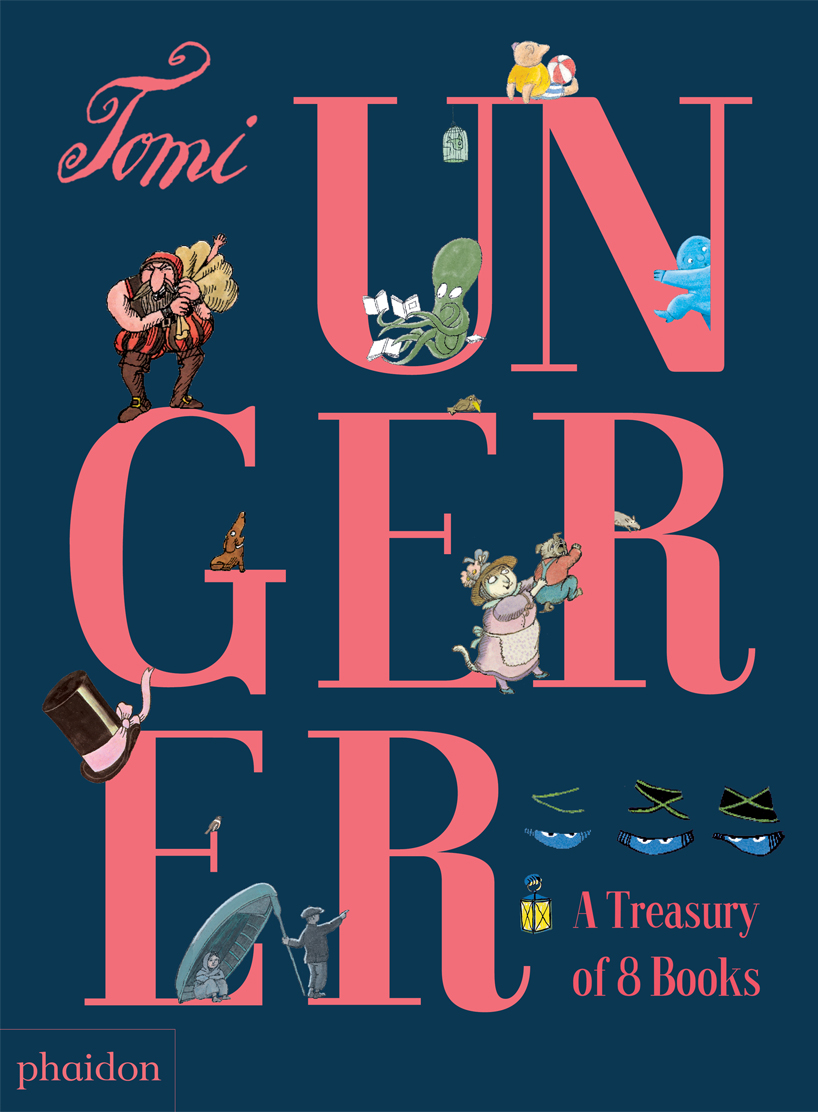 as a winner of the prestigious hans christian andersen award, tomi ungerer is considered to be one of the great masters of children’s literature and illustration. he is known for breaking taboos and pushing boundaries within his work. as part of ‘a treasury of 8 books’, each tale features new quotes and anecdotes, and for the first time, readers can see the previously unpublished materials from the making of many of his most renowned stories, including storyboards, sketches and images that influenced him. 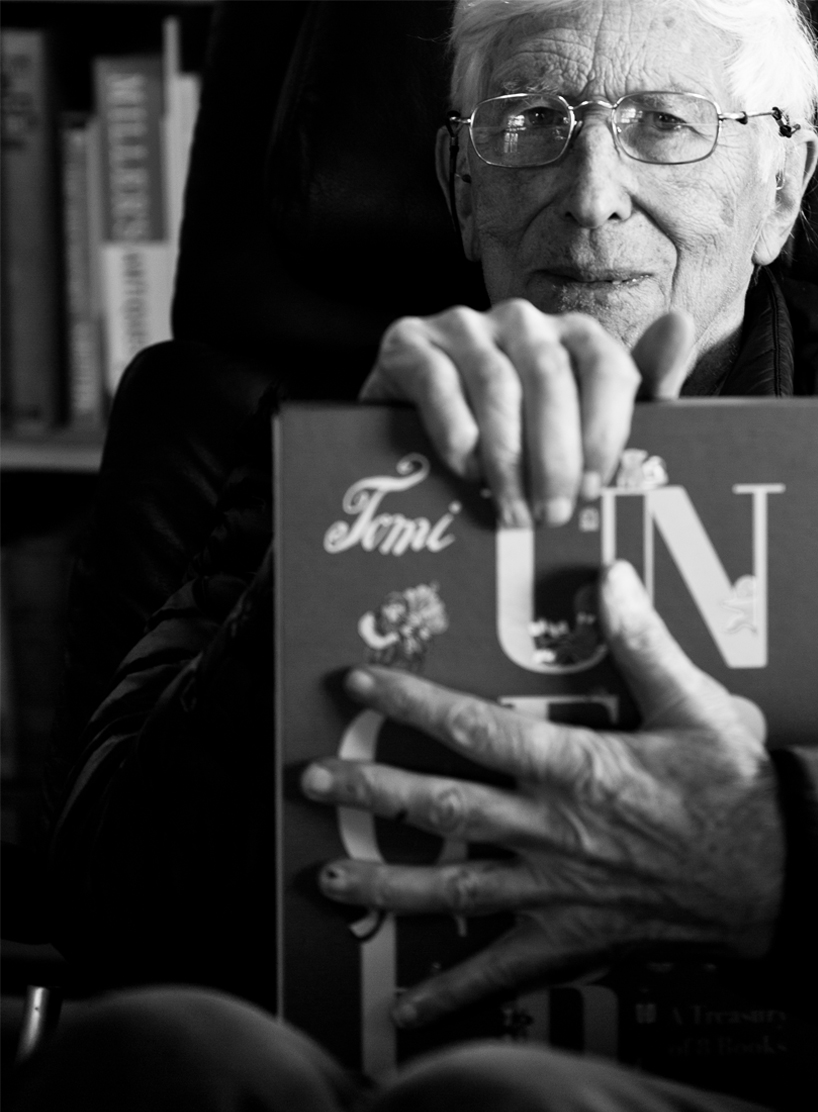 at the st pancras renaissance hotel in london, we interview tomi, who talks about the new book and its exclusive content.

designboom (DB): firstly, it is fitting to talk about this new book, named ‘a treasury of 8 books’, which is a compendium of eight classic picture books. why were these eight chosen to present together?

tomi ungerer (TU): I didn’t choose them because I have done over a 140 books in my life. in a way, children’s books are just a sideline for me, and is just one facet of my work. I wouldn’t say it is what I am professionally, because I do so many other things. this was the publisher’s job. they  hope that there will be a second and possibly even a third volume with all the other titles which are remaining. you have to understand that my position in the anglo-saxon world, including england and america, has been very deeply contaminated. whilst all my books are published all over the world in 44 languages. even 15 years, my korean publisher was struggling to publish my books in english because I was never published in england before. this was due to a big scandal I had with my exhibition at the royal festival hall many years ago. as well, as you know, I was banned from the US for nearly 45 years, and all my books were forbidden. there are a lot of people who are collecting my books, and they have found old copies from libraries which have a discard stamp on them. I am very proud of this fact actually. what started seven or eight years ago, phaidon was actually very courageous to take me on because nobody would touch me in england.

DB: so this publishing is a momentous occasion?

TU: phaidon has decided to publish me again which is very fun and interesting because phaidon is best known for its art books, rather than children’s books. I am part of a new relaunch which is great. as part of this, I was able to go back to america four or five years ago. when I was there, it was actually very funny because everyone had presumed that I had died a long time ago! 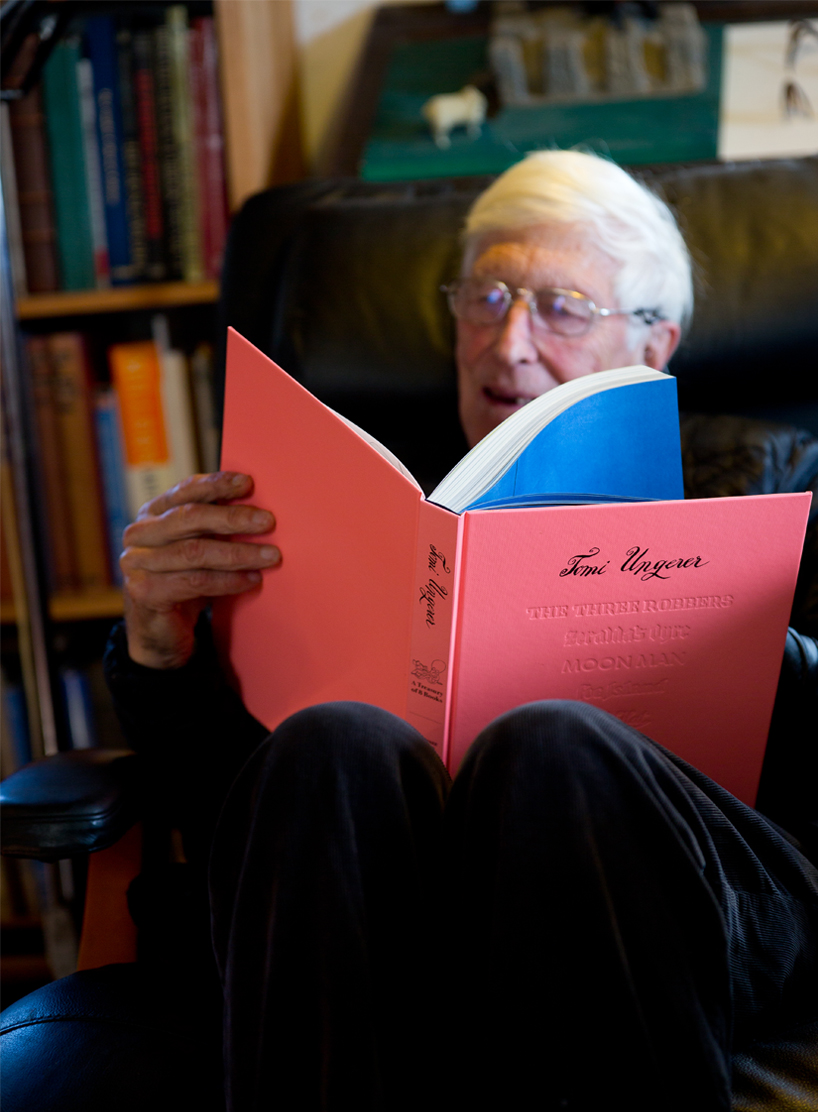 DB: the ‘treasury’ showcases much exclusive and previously unpublished material, why is this book with phaidon the first to showcase this work?

TU: phaidon have done a marvelous job. for one thing, the book is done in absolute excellent taste. I must say that phaidon just brings out beautiful books. I was very lucky because I have been with the same publisher in switzerland for 65 years, and so I am very spoiled with quality. I think that phaidon is one of the only other publisher that is on the same level or can beat my swiss publisher in terms of quality. I am very happy, because in the olden days, my work was never really published in anything of that quality. it really speaks for phaidon to be able to do quality like this. I listened to the publishers, it was their idea. they chose the eight books, but they nicely convinced me to do it. 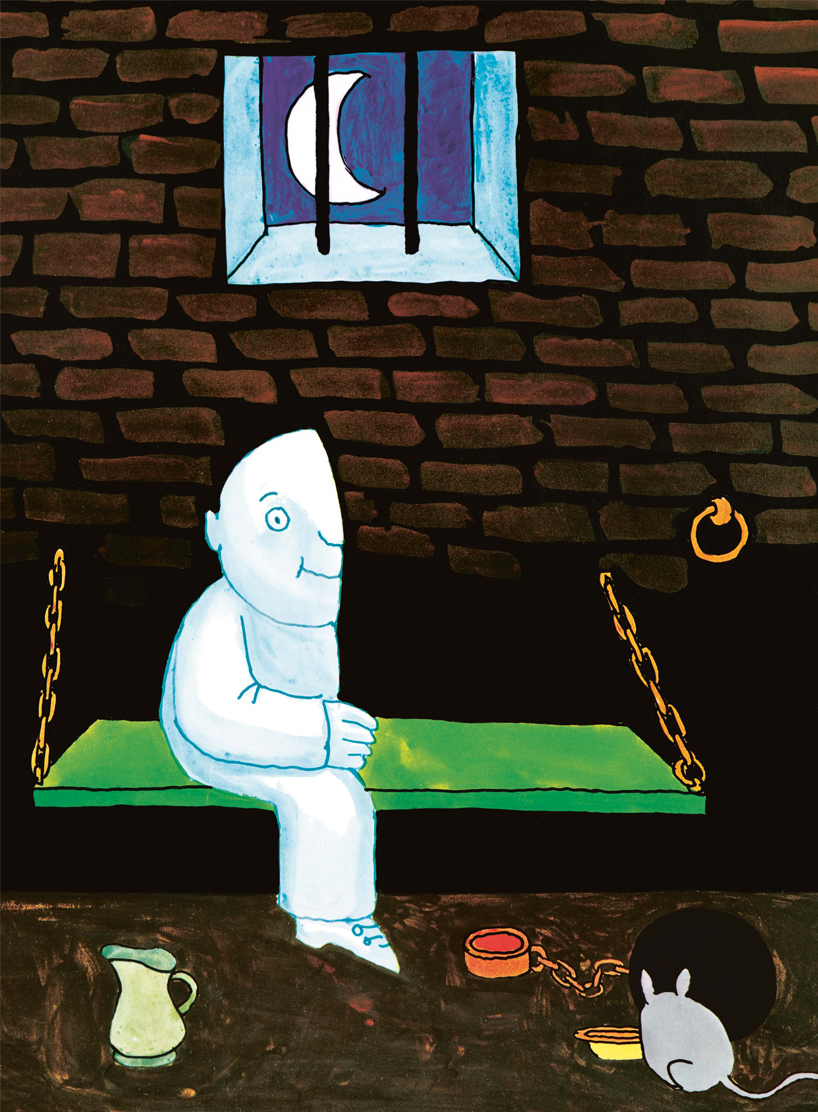 DB: you’ve mentioned the courage of phaidon to publish your work, can you talk about how important this is and the relationship you have with other publishers?

TU: I have been very lucky with my swiss publishers. to have just one publisher that has been like one family all along is incredible. the publisher died three years but his son, which I have known since he was a baby, continued publishing and in great quality still.

the american approach is that once a book is out of print, they want the next one. however my publishers have always kept my books in print or have regularly reprinted them. it is very important to reprint in order to produce the highest quality and to keep my work accessible.

DB: your work is so expansive now and you still produce around three to four books a year. how are you able to come up with new ideas for books and illustrations?

TU: I have kind of trained myself in a way to come up with ideas. I was never cluttered with education, high school or university degrees or anything like that. I could always study anything I wanted. all I needed was self-discipline which I am very good at. I am basically very curious. I have always said that curiosity should be triggered. once you are curious, you collect knowledge. the moment that you start to compare this knowledge, you start to develop your imagination. this is completely lacking nowadays. we are completely controlled by systems and I am basically against this because I have no computer or anything like that. I think it is an infringement on my freedom. furthermore, I am trilingual so I write in french, german and english. I am very adaptable. I write as much as I draw so I can always combine my ideas through both. 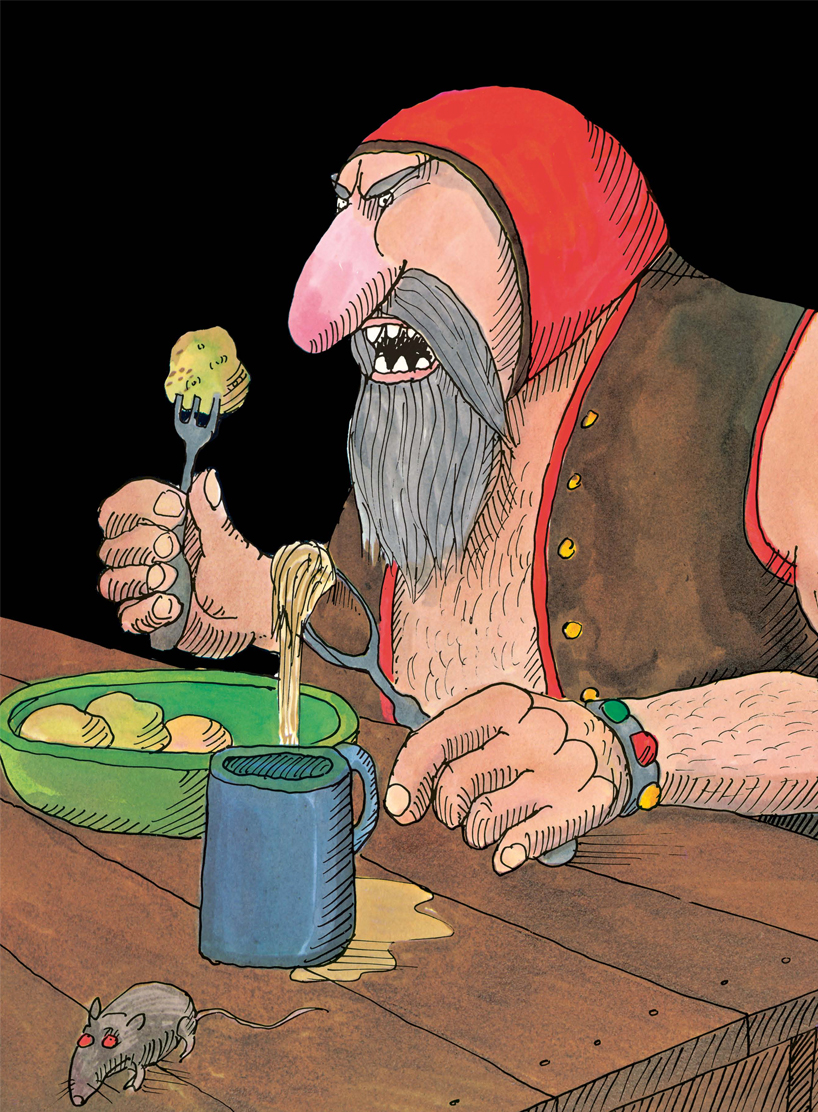 DB: how are you able to portray many different issues in the work of children’s books?

TU: at the beginning it all started with a rehabilitation of hated animals. this covered rats, vultures, bats, snakes and pigs. I always gave them a voice because everyone has something that you don’t have.

DB: is that the foundations for all your characters? many of these personalities and heroes are unlikely and have to overcome a lot of disadvantages.

TU: this is all autobiographic. I never had a fatherland in my life, it was more imposed. was I french or german? I was never asked what I wanted to be. I was as much traumatized by the arrival of the nazis as I was with the return of the french. I am proud of my accent. I speak french in a german accent, german in a french accent, and english it varies to an irishman. I am a chameleon. 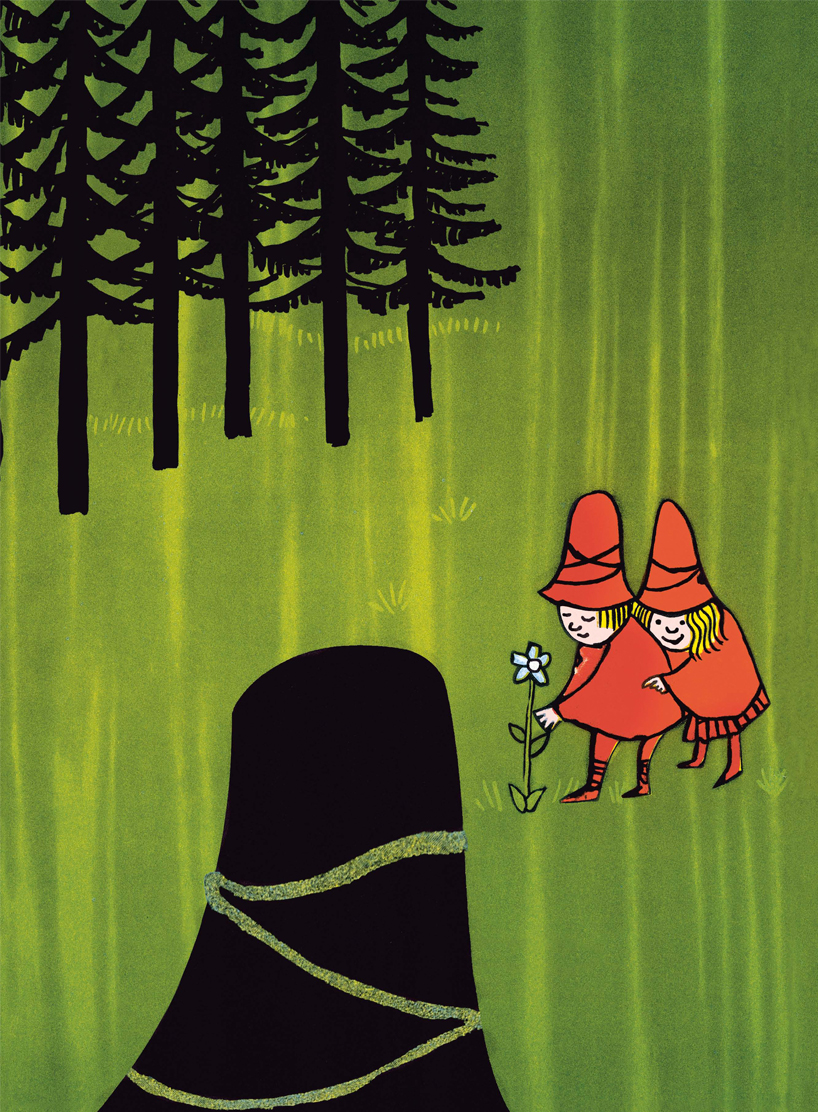 DB: in your books, you don’t mind scaring kids. is there anything too frightening and rebellious for children?

TU: most of my books were animal theme. in the US, I have been treated almost as the satanist because I completely disrupted this mushy-mushy, teddy bear, wonderful world picture. I think that children have to be exposed to reality. reality is out there waiting for them. I was very lucky, I had a courageous mother, she was not scared. we lived by the last bridge that the nazi germans had over the rhine, the battle went on for three months, and all I can remember is us laughing it away. in life, one bomb and you lose everything. it was a different attitude to life. we were a bit tougher back then. now, we are more liable to relying on fate, which mean you do not have any idea about what is going to happen. you will find this mentality in my children’s books. I have said it in my text that children in my stories are never scared. 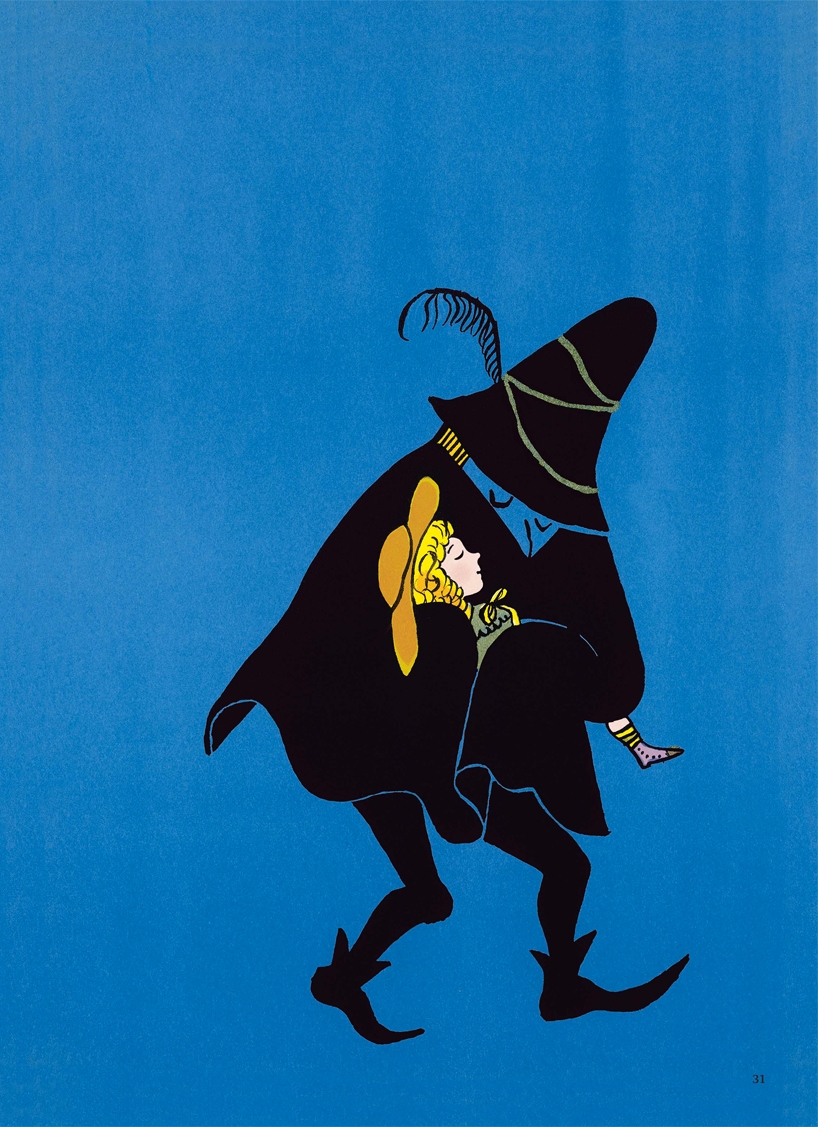 DB: on the eve of your 85th birthday, many established artists, designers and authors, as well as many of your global fans, have been getting in touch to offer their best wishes. how do you feel when reflecting on these words of admiration?

TU: 85 is the speed that I have reached but I have no drivers license!

this is actually really embarrassing. consider this, can you imagine that I am the only artist alive who has a museum in their own lifetime? however, this is because of how much work I give away. I have 15,000 drawings and every four months, we have another exhibition in my museum. this embarrasses me because every artist should have an exhibition.

have you ever heard of andre francois? he and saul steinburg were my idols when I was young. I would always tell him to give his work away, give it to the state at least, but he didn’t. I few years before his death, his study went on fire and there is nothing left now. I could cry. all his work is gone. how can he be remembered now? he was one of the greatest draftsman and artist there ever was. 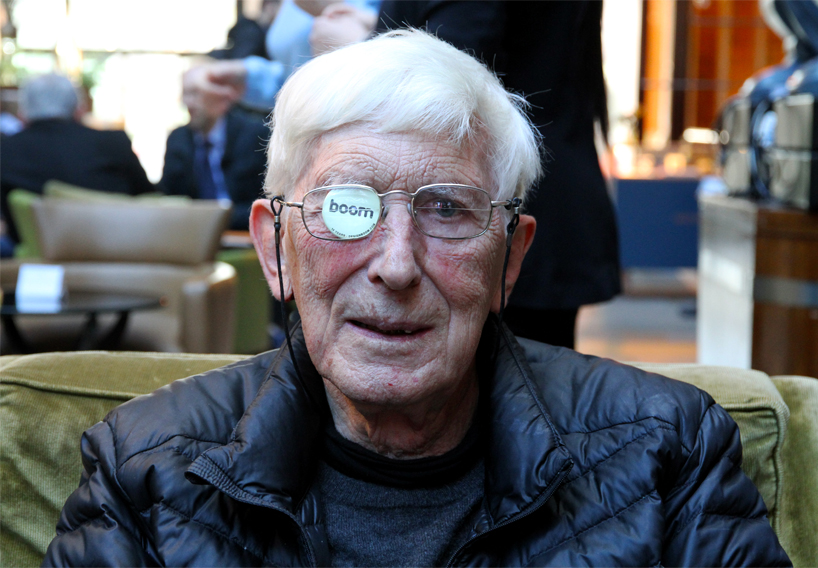 as the son of an artist, historian, engineer and astronomical clock manufacturer, jean-thomas ungerer, aka tomi, was born in strasbourg in alsace, france in 1931. in 1940, alsace is annexed by the germans, and tomi undergoes nazi indoctrination at his school in colmar where french is forbidden. after failing the second part of the baccalauréat exam, his headmaster describes him as a ‘willfully perverse and subversive individualist’, and tomi embarks on hitch-hiking across europe. in 1952-53, he joins the méharistes (french camel corps) in algeria, but is discharged after falling seriously ill. afterwards, he goes to the municipal school for decorative arts in strasbourg, but tomi is asked to leave after one year. in 1956, tomi sets out for new york with 60 dollars in his pocket and what he later describes as a ‘trunk full of drawings and manuscripts’. the following year, tomi publishes his first children’s book ‘the mellops go flying’ and is an immediate, award winning success. as his children’s work continues for the following years, tomi becomes busily engaged in the civil rights movement against segregation and the vietnam war in 1962. he publishes numerous posters which are notable for their radical stance, and in 1966, he becomes the food editor for playboy magazine. in 1981, the retrospective exhibition at the musée des arts decoratifs (louvre) in paris celebrates 25 years of tomi ungerer’s career. in 1998, he is awarded the hans christian andersen prize, the most prestigious children’s literature prize, and is awarded the european prize for culture. 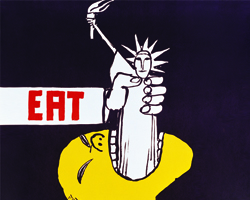