nikolai and simon haas are twin brothers who were born in austin, texas, USA in 1984. they studied stone carving and construction under their father in their hometown for many years before moving to los angeles in 2010. in the years since, the brothers have continued to grow their design studio and spend their time prototyping forms and experimenting with materials, surface textures and processes. they have gradually evolved into a multifaceted operation and has garnered international accolades for set design and props for print and video, one of a kind fashion works and their highly original furniture and object designs. designboom spoke to niki and simon ahead of their upcoming show at R and company in november.

designboom: do you remember some of the first collaborations that you worked on together?

simon: the first thing we ever collaborated on were some slippers called ‘pussy foots’ when we were 13. they were vaginas that you put on your feet. they were the idea of niki originally and I decided to make some for him as a christmas gift. later on we started producing them for friends and people who requested them – it was amazing because we earned about $200 per pair! thinking about it, it’s funny that we were making a sexual, non-functional object – which is exactly what we are doing now!

niki: we’re just doing it on a larger scale now! 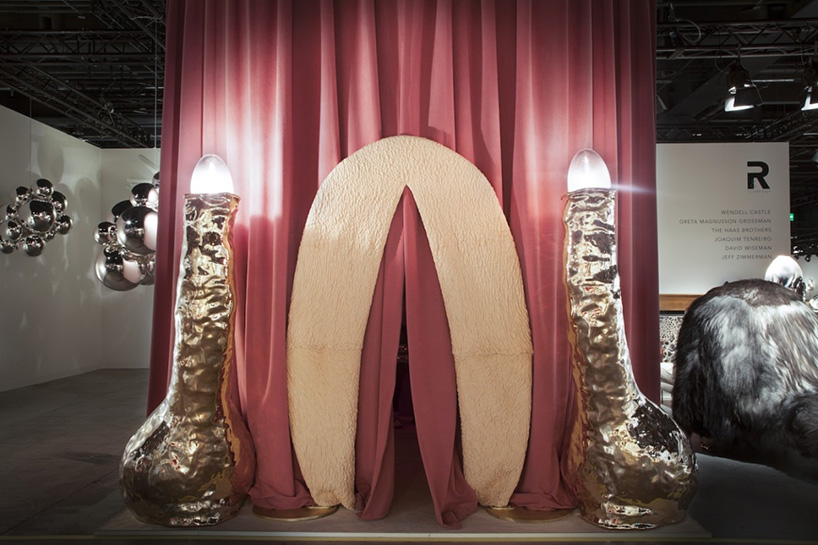 designboom: how do your skills and personalities differ?

simon: we’ve grown up with very different skills and it’s hard to know if that’s completely innate or partly down to being twins and always being together. we’ve definitely used our strengths (and weaknesses) to our mutual advantage by functioning as a team. for example, as kids, I would make all our phone calls because niki didn’t want to make phone calls. I didn’t drive because he had a car and would drive us both aorund. niki is very good at math so I never bothered with it much…

niki: simon is very good at languages and I’m not, so even today if we’re in a foreign country he will speak in foreign languages for both of us, while I’m dumbfounded.

simon is very philosophical and he comes up with a lot of ideas on how we should produce things and I’m very hands on with the materials. simon’s a very good painter I’m more comfortable with sculpting. so we have very specific roles which were never pre-determined but we’ve fallen into them because of our strengths. probably the thing that unites us the most is our taste in aesthetics.

simon: niki brings a lot of the energy and the expression whereas I’ll spend time analyzing and researching materials or a direction for the work. often when we come up with ideas together they’re very spontaneous – so I’ll spend some time trying to develop them and formalize them. 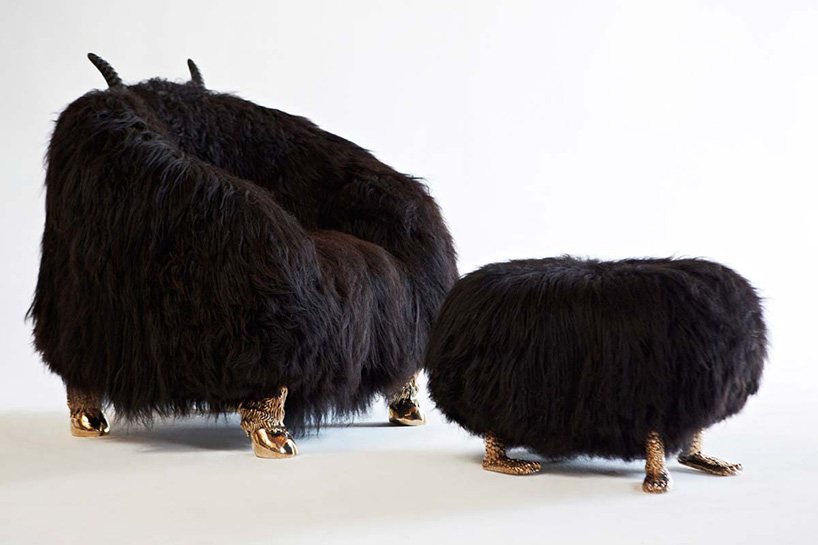 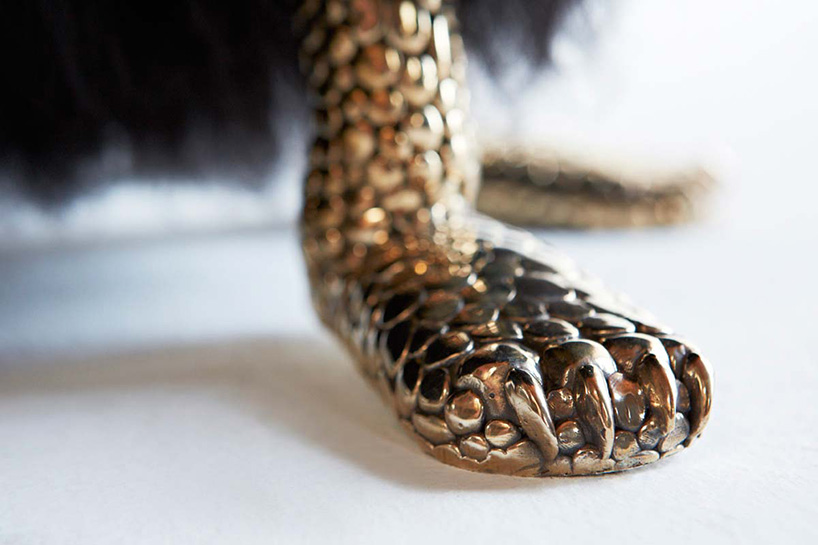 designboom: what are some of the most important influences you both share?

simon: I would say that the biggest influence on us both would be vincent gallo.

niki: yes, definitely. vincent was a huge influence on us – he taught us a lot, in the way he perceives things and analyzes everything. 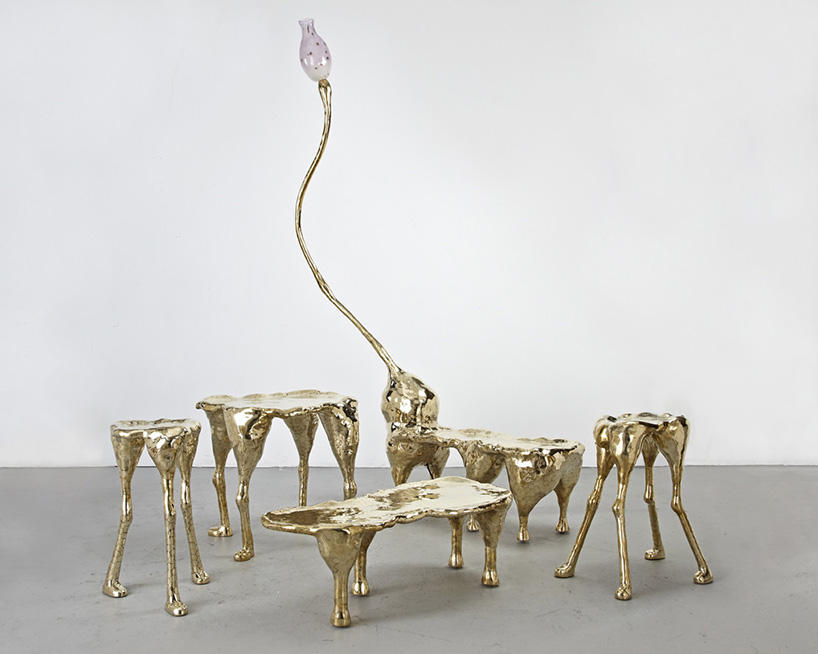 designboom: what do you both agree on most strongly?

niki: we are both anti-shame, anti-orthodoxy. we’re pro-human and pro-society – that’s where we are coming from.

simon: really there’s not much we disagree on. through working together we’ve become even closer and have developed the same philosophy on everything – that’s really what the work is about – expressing our shared philosophy. 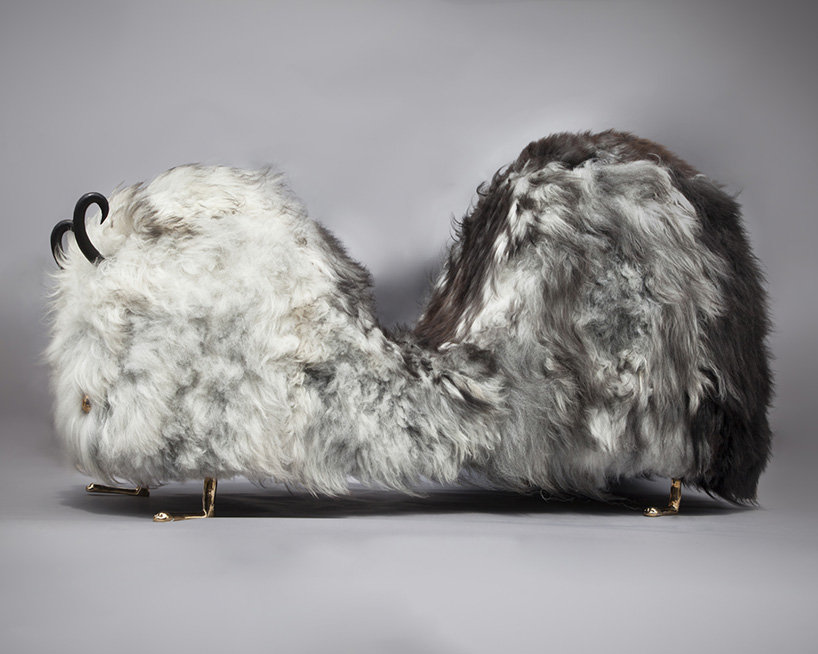 designboom: so there’s nothing you disagree on at all?

simon: yes but it’s usually very small, unimportant stuff and one of us will be able to back down and change our mind.

niki: simon likes bjork and I’m not really into her.

simon: yes, bjork’s music – that’s something we have different opinions on!

niki: I’m a huge ice hockey fan, which is something simon doesn’t really care about too much. I’m obsessed with hockey and I love the LA kings. 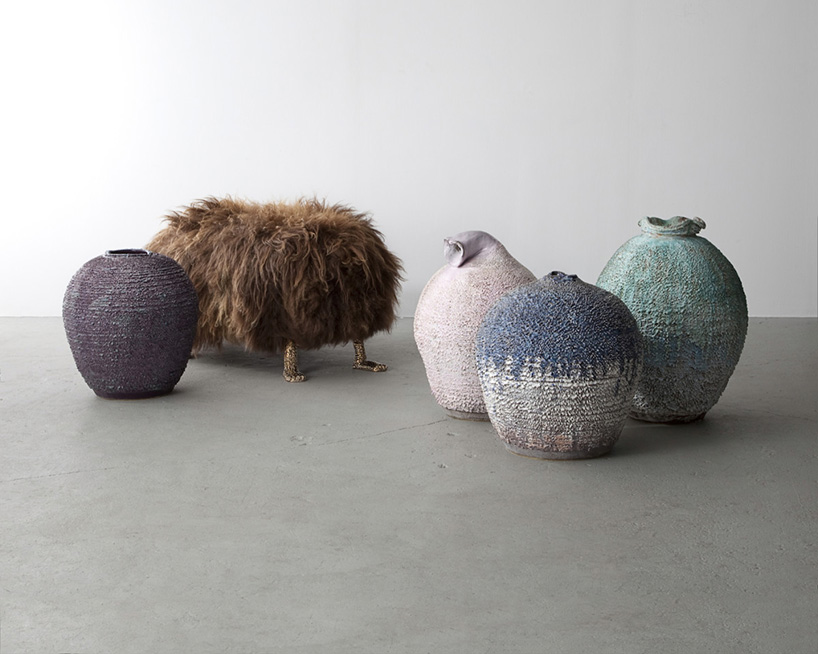 designboom: which materials do you enjoy working with most and why?

niki: epoxy clay – I start all the sculptures with that usually and then think about how to translate them into other materials. I also love glasswork. 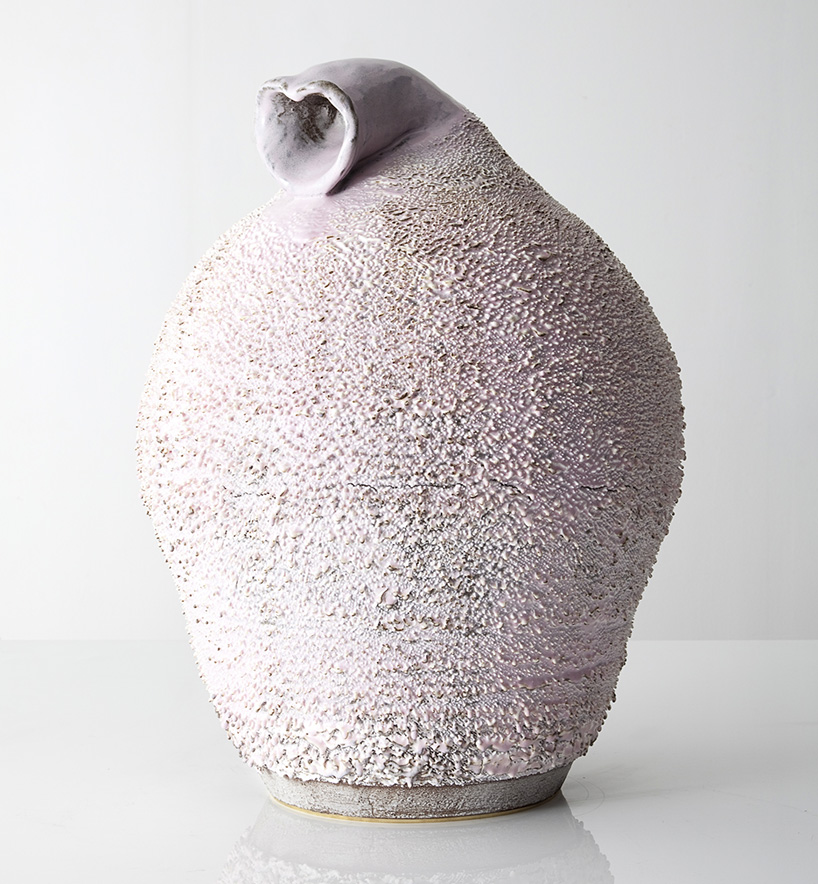 designboom: are there any materials that you would like to work with more in the future?

niki: without sounding too full of ourselves, I can’t think of many materials we haven’t worked with. maybe there’s some that we outsource like carbon fiber or fiberglass but we’ve worked with a lot of materials.

simon: I’d like to do more architecture projects in the future if I can.

niki: we’re making a film at the moment and that’s been great fun. we’re slowly getting better at it – making films is something I’d love to become very good at. 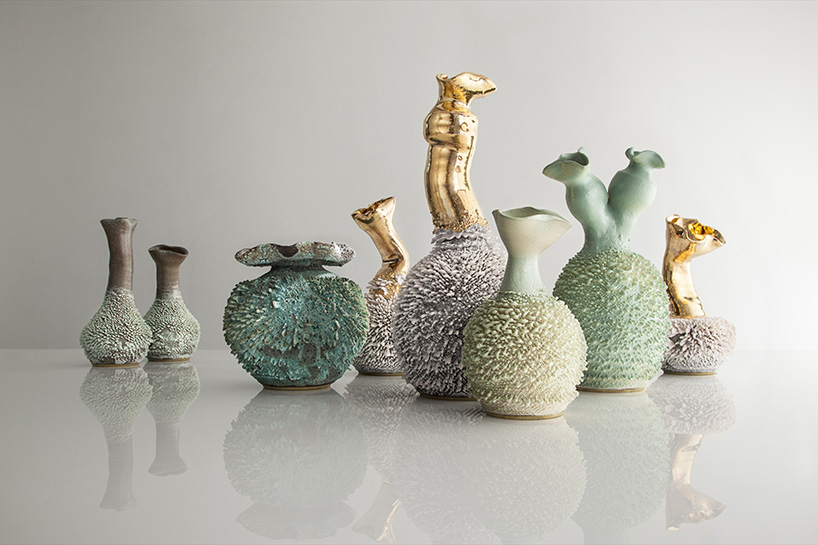 designboom: have you seen any projects lately that have highly impressed you?

simon: the work of takuro kawata – he does a lot of experimental ceramic works and he’s one of the few people who produces ceramics that I can’t quite figure out how he’s made certain things. as someone who works with the same materials you can usually break down an object in your mind and understand how it was made but some of his stuff is really mind-blowing because I just can’t my head around it.

another thing that blew my mind recently was the perceptual cell by james turell – I’ve never experienced anything as important as that.

niki: yes, I’d have to agree with that – james turell… he’s someone who continually leaves me in awe.

designboom: the majority of your work references sexual themes – how much do you self censor?

niki: I like to think of it like this; every animal has reproductive organs, every human has either a dick or a pussy – these things are always there – it’s a fact of nature. sometimes it’s sexual and sometimes it’s not. a lot of times the easiest way to know someone well, and know if they are real is to talk about sex with them or to use humor. we think of our pieces as a conversation with people, so by using sex and humor we’re immediately having a real conversation with people. buyers and gallery owners think the work is funny and that’s what we’re going for. by making people laugh it brings their guard down and we’re all on the same page – that’s the whole point.

simon: I think the only time that we’ve scaled back was with the sex room at art basel in miami – and that’s funny because it was very explicit but that’s a show where we had to think about the theme of sex and the messages in the work more delicately and accurately.

niki: we were adamant that sex should be shown as something positive, not something pornographic but also not innocent. those were the things we were thinking about with that work.

simon: sex, humans and animals are themes that are evident in most primitive art and so what we’re doing is inline with a very early need to express these things through art.

niki: sex is a big part of life so there’s no need to feel shame about it – if sex is not part of your life then that’s a big bummer! it’s actually surprising to me that so few artists use sexual themes in their work. we’re just accepting reality where as some artists prefer to ignore it.

simon: when people do live drawing classes and omit genitalia because it makes them feel uncomfortable – that makes me uncomfortable, it should be there.

designboom: has seeing the way people react to your work first hand given you insights that you may not have expected?

simon: absolutely. that’s perhaps one of the main reasons why we have continued with this kind of work. we designed a chair that had some brass testicles hanging form it. everyone who passed by would interact with it and touch the balls and you saw them light-up with laughter – from the most formal looking people to the most understated – they’d then talk to us and it created a real conversation.

niki: everyone was laughing and positive. these brass balls were creating positivity and fun. because sex is such a common theme it brings everyone together, that’s why we’ve continued to celebrate it in our work. 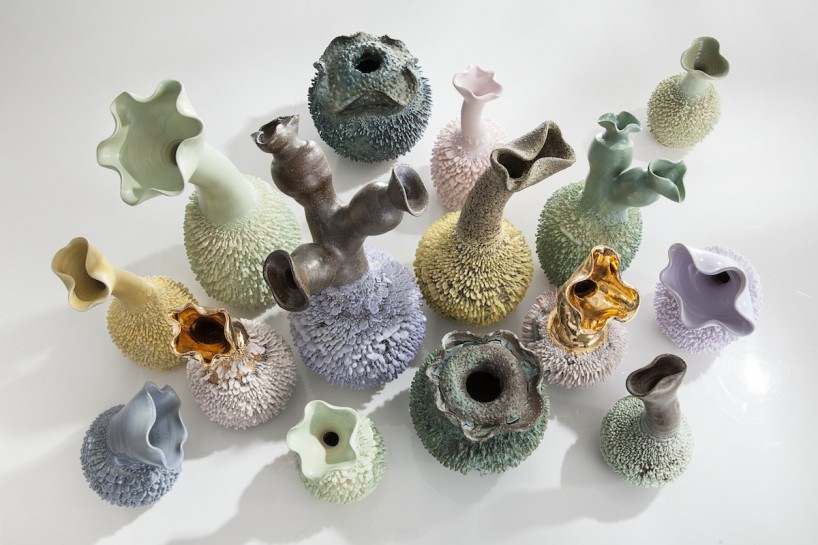 designboom: what lessons has your work taught you in recent years?

simon: that in the same way that sex is branded as something bad and shameful when you’re a kid – there’s lots of other social constructions that make people feel bad that shouldn’t. it’s surprising that so few people realize that most of the hang-ups and worries they have come from systems implemented by people that benefit from that system. people are generally very obedient so only a few question these systems and try to live another way.

you see this especially in the ‘design world’ if we have to call it that – that some people love the hierarchy of it all. the people inventing titles or genres are the ones making money from them.

there should be much more room for expression in every aspect of life. we are trying to react to that – we’re trying to explore and understand which areas and aspects of our lives have been completely shaped by someone else and what they have impressed on us. 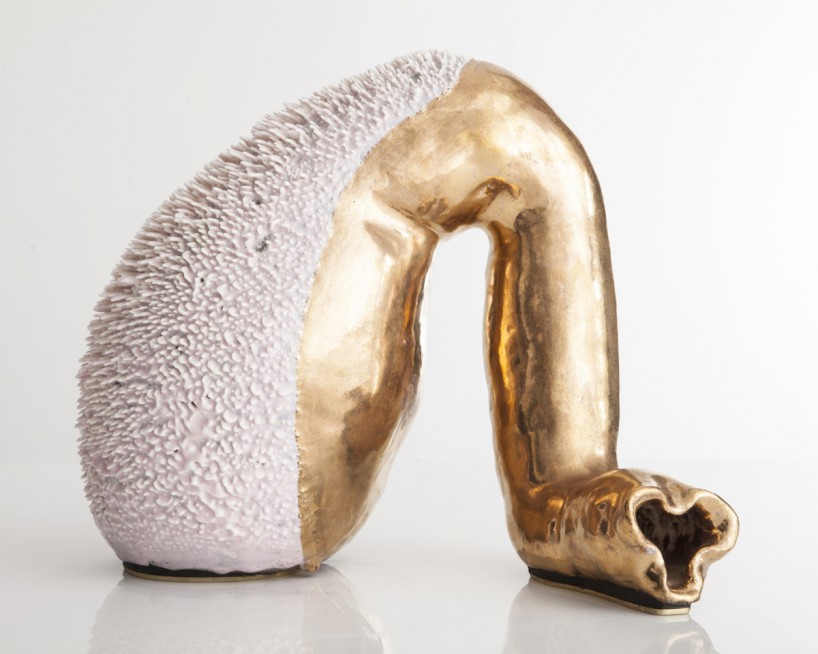 designboom: please could you tell us about the new work your going to show at R and company in november?

niki: there’s the sex room from art basel but the rest of the work is new and not overly sexual. the name of the show ‘cool world’ is taken from the 90s film of the same name. it’s a film that we desperately wanted to watch as kids but our parent’s (quite rightly) wouldn’t let us. the film was kind of a flop, nobody really liked it and we never got to see it. but the idea of what it might be, the excitement of this ‘forbidden thing’ is what we wanted to capture with the new work. the idea of there being a freedom on the other side but you’re not allowed to touch it. if you want to dumb it down – the idea is about something being ‘cool’.

simon: also the mix of reality and cartoon. we want to blur the line between ideas of ‘high’ and ‘low’ art – which is something we don’t believe in ourselves. we chose the name cool world because it’s something that art-snobs won’t like.

simon: don’t listen to anybody.

niki: just be yourself. 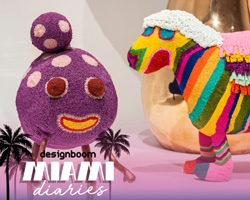 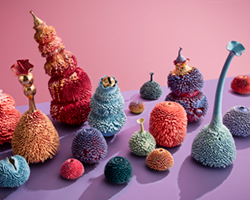 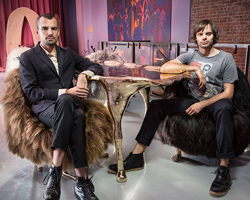