theo michael was born in thessaloniki, greece in 1978. after studying art in his home city, utrecht and london he moved to mexico city, where he is based at present. his work ranges from intricate graphite drawings on paper to primitive sculptures made from materials such as foam, paper, sand and soil. designboom spoke to him ahead of his new exhibition at the steve turner contemporary in los angeles.

designboom: was there an instance from your childhood that made you want to become an artist?
theo michael: I feel as though I have been drawing since time zero. actually, my mother recently found a drawing I did when I was two years old – it’s a paper filled with little circles and inside each circle is a little dot. she explained to me that at the time I had told her I was drawing fish. and in school I was always the kid in the class that did the ‘epic drawing’ the most ambitious.

my mother is an artist and art teacher, so when I was a kid she would take me to art shows in greece and I was repelled by what I saw in the greek art scene in the 1980s. I was more attracted to comics and cartoons. my father was an automobile designer and I loved the complex drawings he would do – so initially I thought ‘fuck art!, I want to become a designer or a comic artist’. finally the breakthrough came when I was fifteen and my mother took me to the venice art biennale – I was really impressed by what I saw. the work of damien hirst, keith haring and basquiat raised all sorts of questions for me and I became very interested in becoming an artist myself.

I began buying a lot of art books; warhol, pop art, etc. and educating myself. I wasn’t sophisticated at all – just a regular kid and it all seemed so impressive to me, like another world from what I knew growing up in greece. from then on I became fascinated with the early graffiti artists like futura 2000, hip-hop and what was happening culturally in cities like new york and london. 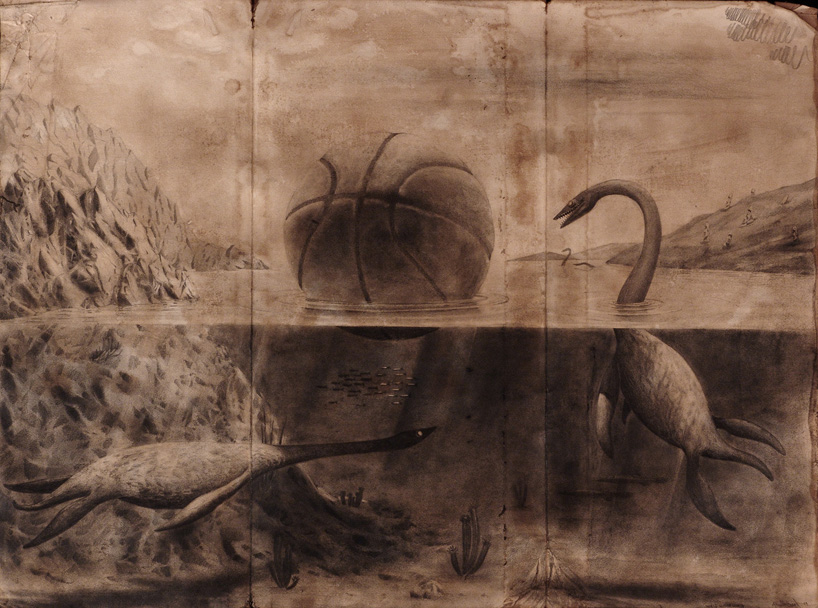 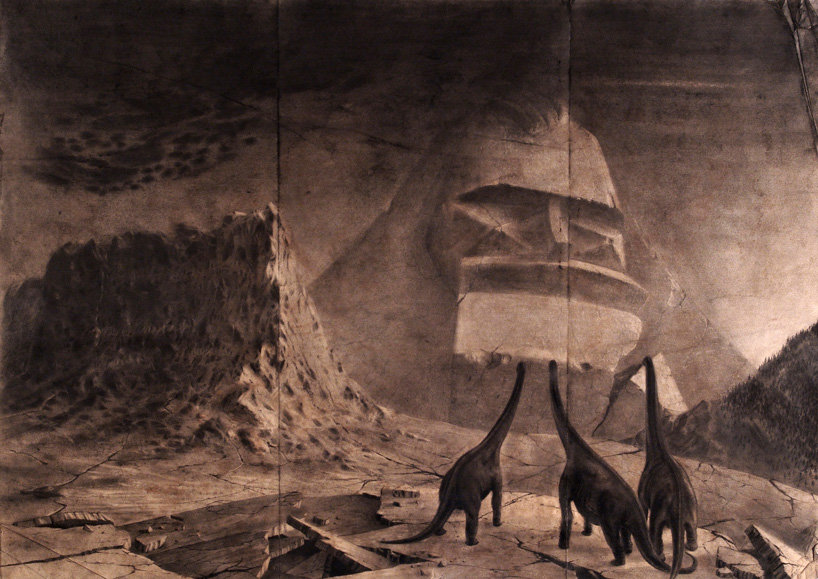 DB: is this when you decided you wanted to study art?
TM: even if I wanted to be an artist I still wanted to study architecture or industrial design, but I needed certain academic qualifications; maths, science and so on – I didn’t have a chance because, as much as I like to study I was a bad student at school – I was always distracted with my own books rather than the school books.

I was able to get into the fine art school of thessaloniki with my drawing skills alone, I didn’t need the academic qualifications, which suited me perfectly. I was there from 1996-2001. after I graduated I moved to athens and worked as a VJ in a night club, it afforded me a lot of creative freedom and a good wage but I was partying a lot. I understood after a while that this was a sort of bubble that would eventually pop.

I considered my options and decided there wasn’t much of a future in VJing, so I applied to go to art school in london and do a masters degree. I moved to london and never looked back. london was a revelation to me. it’s the best city in the world in my opinion. I went from being a spoilt kid in greece to working several part time jobs in london just to survive. it’s a tough environment because it’s expensive to live there and the level of competition in every field is very fierce – so it forces you to push yourself. I learned a lot from living there. 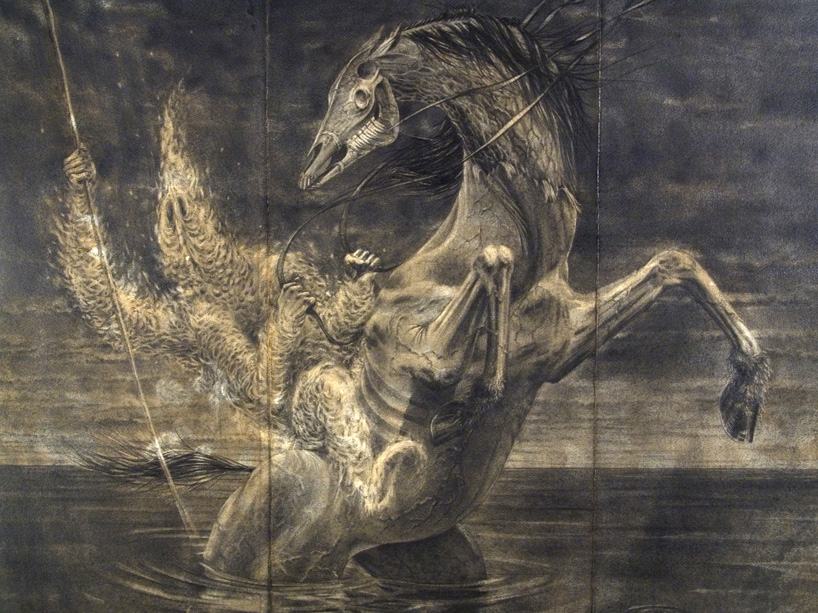 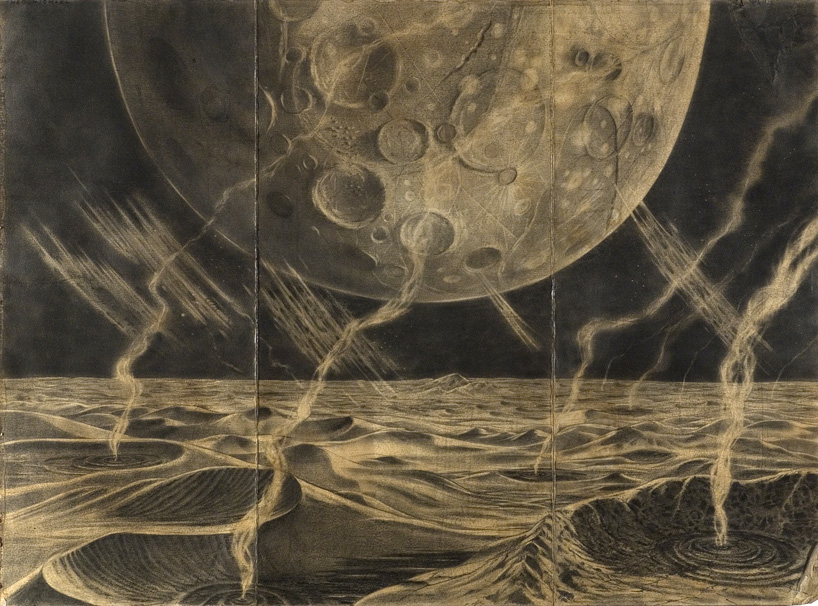 DB: is that what made you return to drawing with pencil?
TM: the people working in digital animation and post production in london were incredibly advanced compared to what was going on in greece. I freelanced on some  projects and did some collaborations but gradually I became disillusioned by digital art. it was a lot of work, very little pay and a huge amount of competition – I no longer felt satisfied by that world.

to be honest, I only entered that line of work to make money which I could invest in becoming an artist but the plan didn’t work – I didn’t make any money. so, I decided I’d just do my drawings and hopefully make a living from selling them.

from 2001 until 2006 I’d hardly drawn, almost all my work was digital. I’d lost my touch but I wanted to get back into it because of how much I enjoy drawing. from that point on it’s been full immersion. 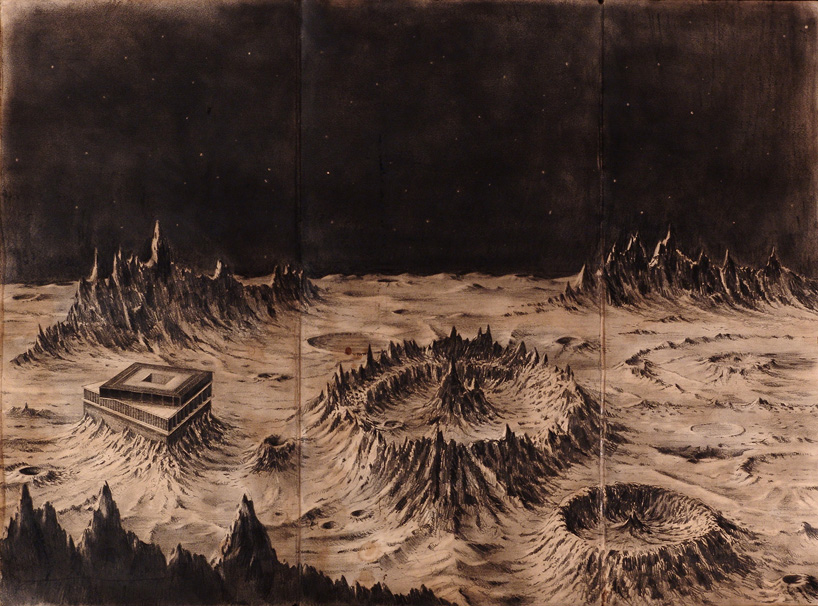 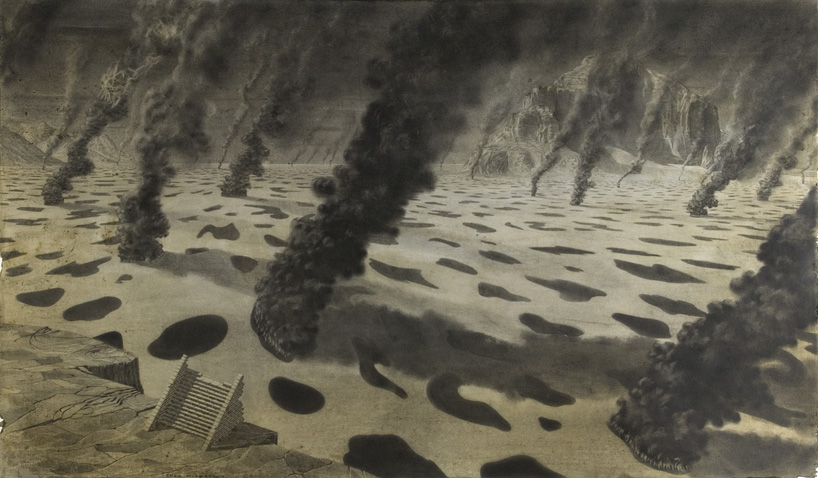 DB: how easy was it to pick up where you left off with the drawing?
TM: time is rarely the issue for me because I’m a workaholic, I always find time for the work. I’m very focused in whatever I do, whether it’s reading, research or drawing. I’ll just stock-up on coffee and stay there with the thing until I have something I’m happy with.

I soon found that drawing is the perfect medium for me because it allows me to stay focussed for a long period of time and achieve results which not everybody can achieve or replicate easily. for example, I could spend ten continuos hours on an animation and create just a few seconds of animation that I was happy with, which was very unsatisfying because a bigger company with more people or better resources could achieve the same thing in much less time. it felt hopeless.

with drawing it’s a highly personal process. it’s just you and the paper. what you see in a finished piece is the result of the artist’s relationship with the paper.

after talking, singing and dancing, drawing is perhaps the most natural form of expression. there is only your hand and the pencil standing between what you conceive in your mind and the end result.

DB: … you feel that there’s less of a filter when you work by hand than digitally?
TM: yes, totally. there’s also less ‘production’. there’s no storyboard, no after effects, no crew. it’s up to you and you alone to produce what you imagine is possible. if you come up with an idea for a film or a building it might be five or ten years before it’s realized, which is exhausting because you are no longer the same person as you were when you started! whereas drawing and painting very successfully retain the immediacy of expression. 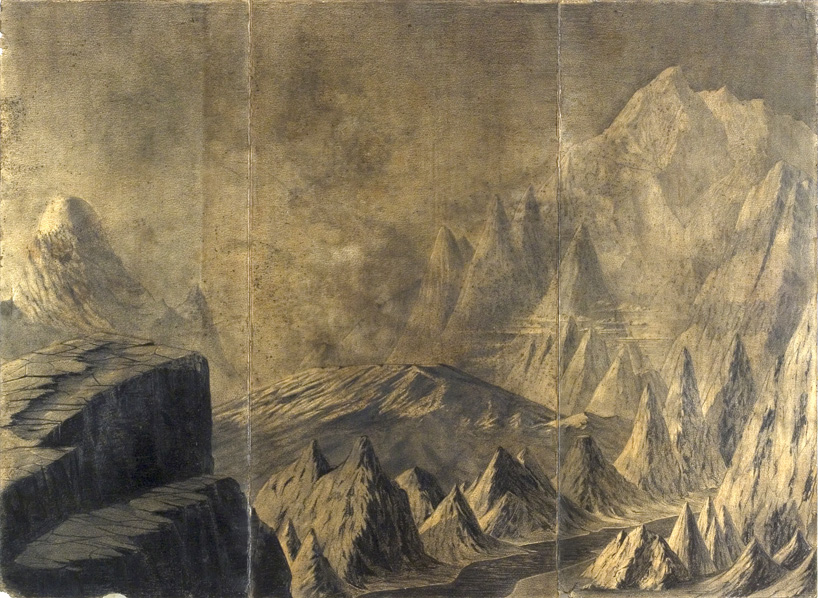 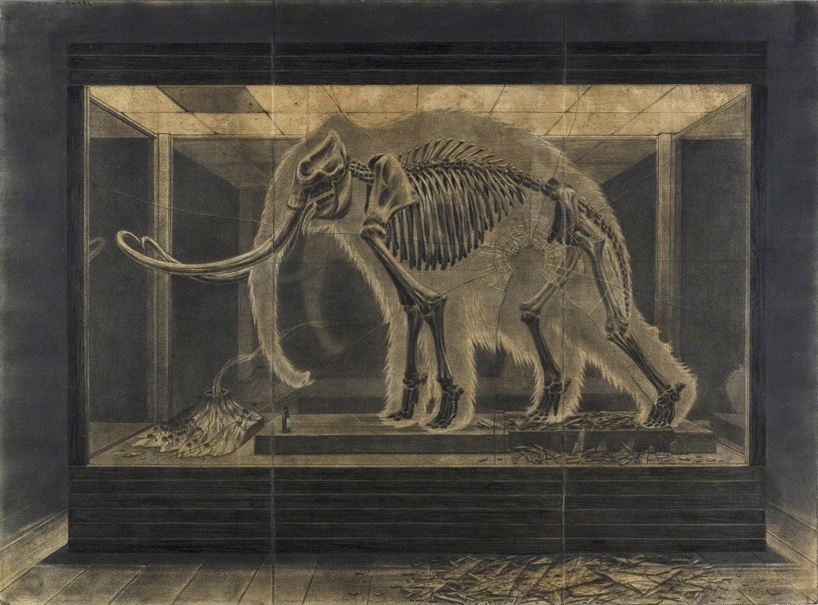 DB: who would you say have been some of the biggest influences on your approach to art?
TM: the romantics – the likes of john martin and thomas cole –  are quite a big influence on my work. they created art in a time where the findings of the age of enlightenment were still very influential but they understood that science isn’t everything. they manage to highlight the vulnerability, the insignificance of humans in relation to the vastness and mystery of the wider universe.

DB: apocalyptic visions, science fiction and even alchemical themes are all referenced in your work…
TM: yes, I’m interested in those subjects. for me alchemy is a romantic approach to science, which is probably the best way to pursue it, because every scientific rule eventually changes. it might not be in our lifetime but you can bet that a new discovery about the universe will eventually alter or completely abolish a rule of science that is considered an absolute fact today. the parameters are always changing. science and religion have all these expanding questions, the ‘force behind the force’, the ‘reason behind the reason’ but art is able to answer the mysteries of life in abstract and magical ways. 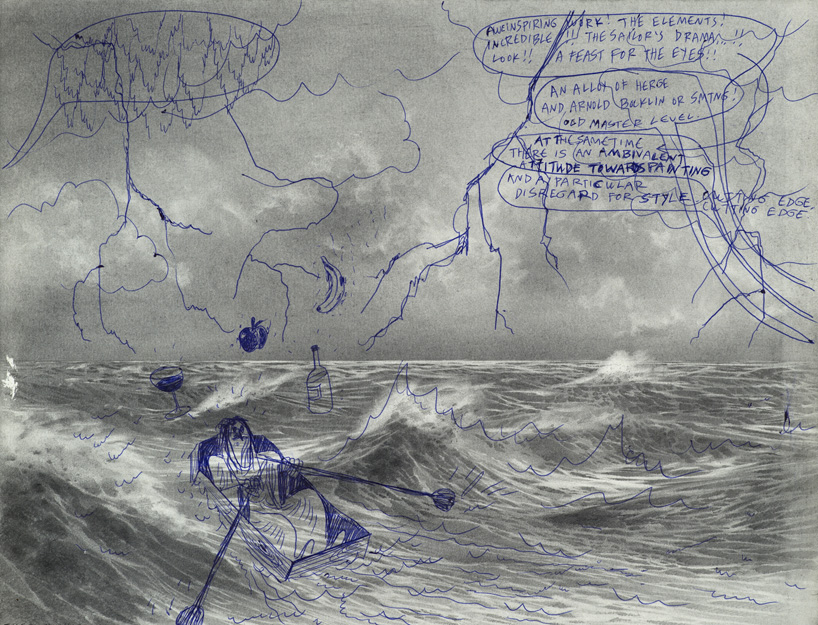 DB: what shifted your work from drawing to sculpture as seen in ‘reptile dialectics‘?
TM: almost all the materials for the sculptures shown in reptile dialectics were bought from building supply stores in mexico. I would go to these shops and see all these cheap, primitive materials; sand and soil and it got me thinking. I like the idea of creating value out of ‘nothing’ opposed to working with highly valuable materials. if you work with, say, titanium and diamonds or blocks of gold you’re under intense pressure to sell in order to recuperate the money spent on making them. in the end the material is not that important – it’s what you are able to do with it that gives value to the artwork. 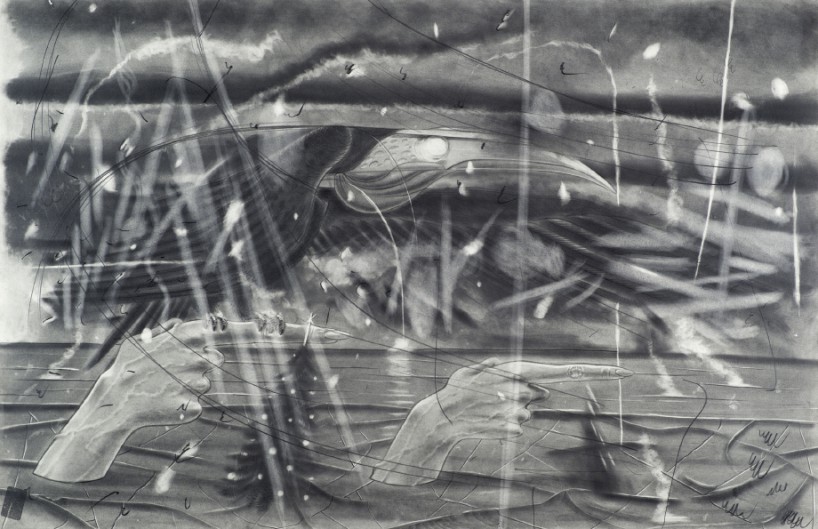 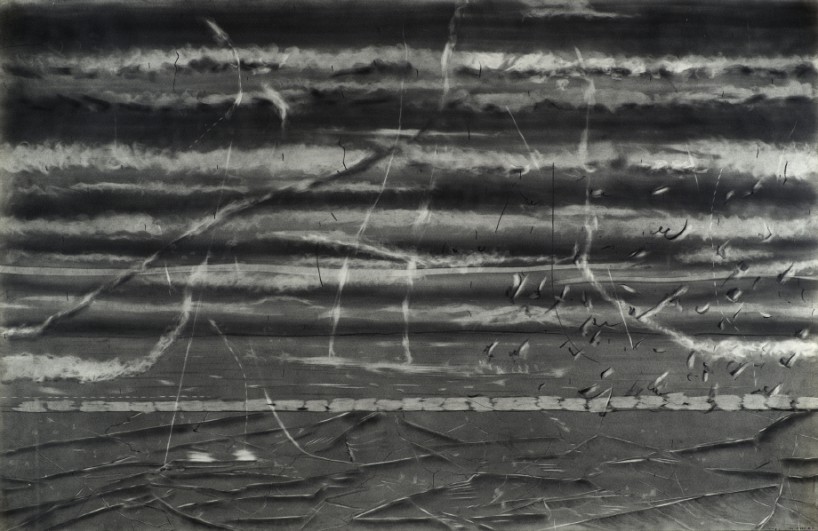 DB: what do you know now that you wish you knew when you were 21?
TM: wow! to be honest I think when I was 21 I was sure of more things than I am now. I should try and remember the things I knew when I was 21 to better myself right now! I had a great time and have no regrets. what you are creating from 18-21 is very pure, your not fully aware of how the art industry works or what your work is about. everything is out of context. at that age I would do spray-paintings of monster trucks. why? just because! there was no reason, I just wanted to do that. maybe it was a reaction to all the cliché greek art I saw growing up.

DB: what are you currently fascinated by and how is it feeding into your work?
TM: actually, I’m waiting for my next craze to arrive. fairly recently though, I was obsessed with oil rigs. I collected photos, drawings, diagrams, texts – everything I could find to do with oil rigs. I was fascinated by the petroleum industry, saudi arabia, the arab emirates, diamond crusted drill tips….  so far it’s not materialized into anything but it may find its way into my work eventually. 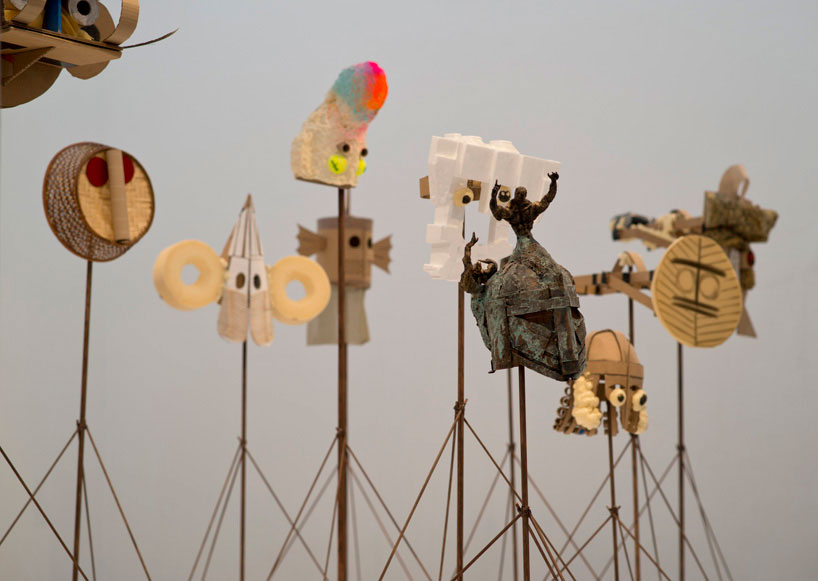 ‘fuck you I’m civilized’, 2014
from reptile dialectics at OMR gallery
see our article on this exhibition » 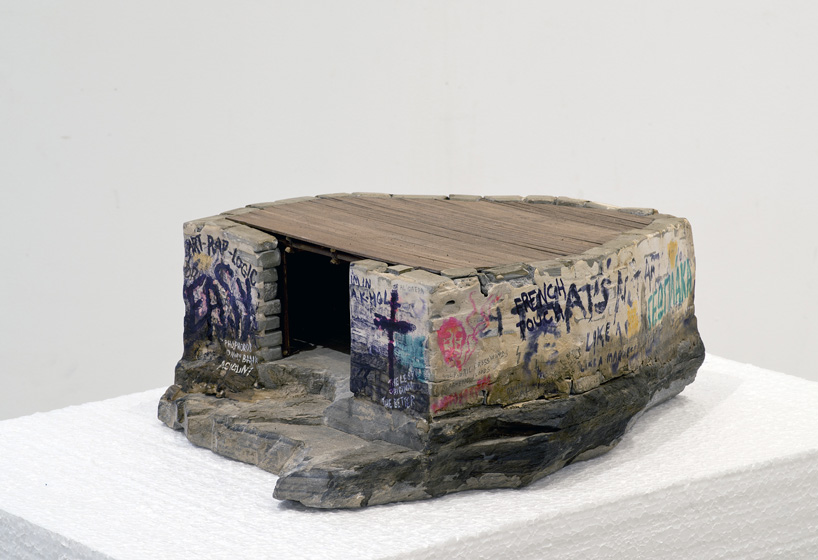 1000 years sideways, 2014
from reptile dialectics at OMR gallery
see our article on this exhibition »

DB: do you have any self imposed rules that you work or live by?
TM: no. as a person of contradiction I often change my mind on things. I don’t believe in ‘good’ and ‘bad’, there’s just circumstances and perspectives that manifest certain behaviors and ways of thinking and these can always change. I don’t have fixed ideas on what is good or bad art, it’s always changing. good or bad artists? every artist has their fans and those who want to degrade them. there’s an audience for everything at some moment in time.

DB: do you have any superstitious beliefs?
TM: no, I’m the ultimate secularist. luck, god, religion, karma… I never bought into any of that. nor do I make connections between the color of my socks and the quality of my day. cause and effect is something I see as science, for the time being at least, but who knows… we never know! 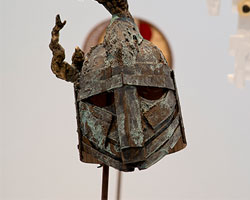 May 06, 2014
reptile dialectics by theo michael at OMR gallery