operating from his home studio in adelaide, australia, dan mcpharlin works across various media, in 2d and 3d. his science-fiction themed artwork has appeared on record sleeves, international magazine covers, books. he talked to designboom about his influences and fascinations.

designboom: what was the thing that initially made you want to become an artist?

dan mcpharlin: making art has always been so important to me that it’s hard to imagine doing anything else. both of my parents were teachers and they were very encouraging with my creative endeavors. I toyed with the idea of becoming an architect at one stage, and later I thought I would be a musician or a film-maker, but I was always drawing or making images on the computer. I was never particularly interested in depicting reality and I think science fiction is really the ultimate escape from the banal. as a child I used to gaze for hours at books like the terran trade authority series and I would get lost in those worlds. 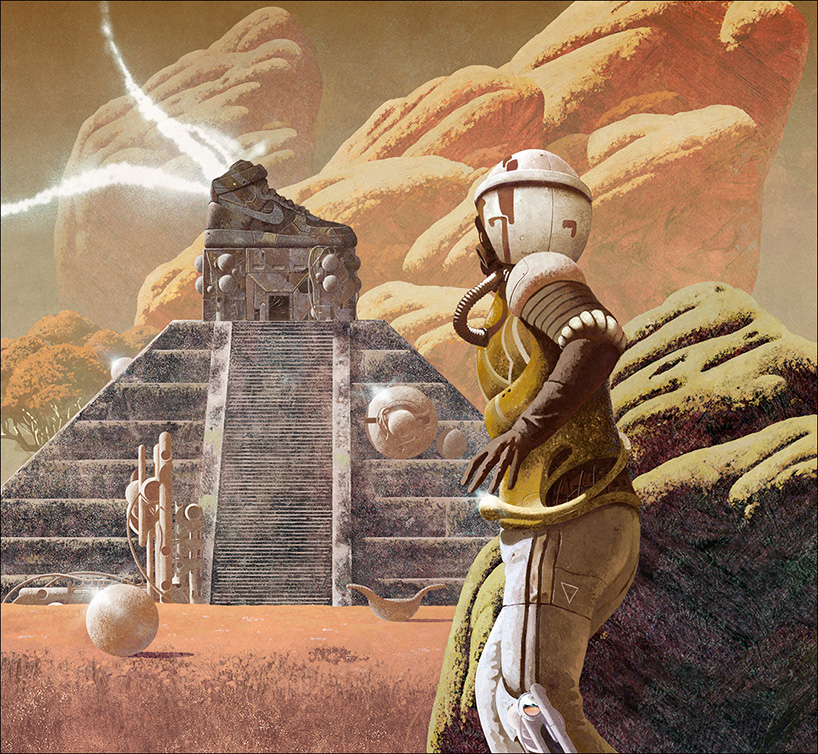 DB: which people or projects have had the biggest singular influence on your work?

DM: artists like chris foss, syd mead and roger dean were huge influences on me back then – and still are today. it’s very hard to narrow down a singular influence, but I think ridley scott’s alien is almost the perfect expression of sci-fi art, and something I always return to when I need my creative batteries recharged. the complete ‘alien-ness’ of giger’s derelict ship design and the creature itself is still mind-blowing every time I see it. there are so many breathtaking visual moments; the water dripping from the landing gear aboard the nostromo, the cryosleep pods slowly opening like a lotus flower, the intense strobing effect as ripley attempts to escape on the shuttle. I think it was also my first exposure to the idea of bio-mechanics; the organic fused with the technological, perfectly illustrated by the xenomorph hiding in plain sight amongst the ship’s piping. with my work, I’m always exploring that intersection of the man-made and the natural and I think alien really cemented that concept in my mind. 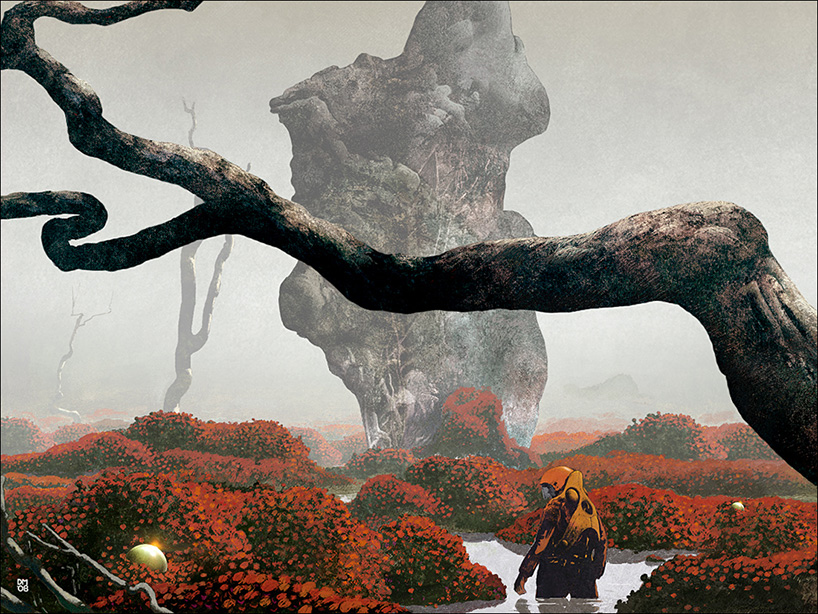 DB: how would you describe your work to someone unfamiliar with it?

DM: an exploration of the internal and external cosmos. I like to deal with themes of solitude, mystery, and the juxtaposition of the familiar with the strange. 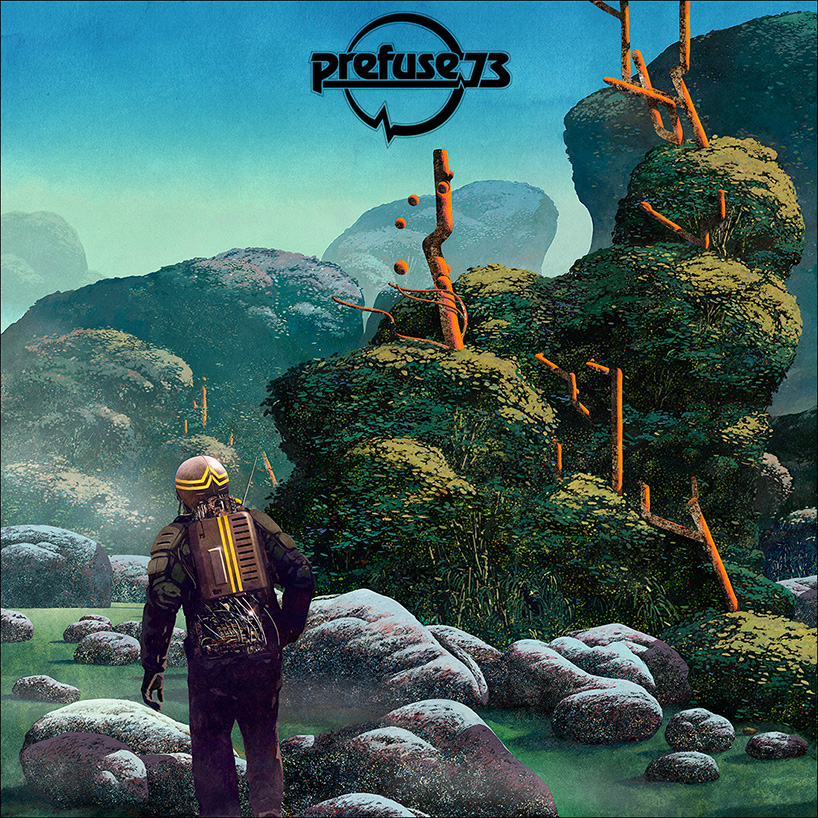 ‘everything she touched turned ampexian’ for prefuse 73 / warp records, 2009

DB: which part of your career have you enjoyed the most thus far?

DM: I always think the work I’m doing ‘right now’ is the most satisfying. 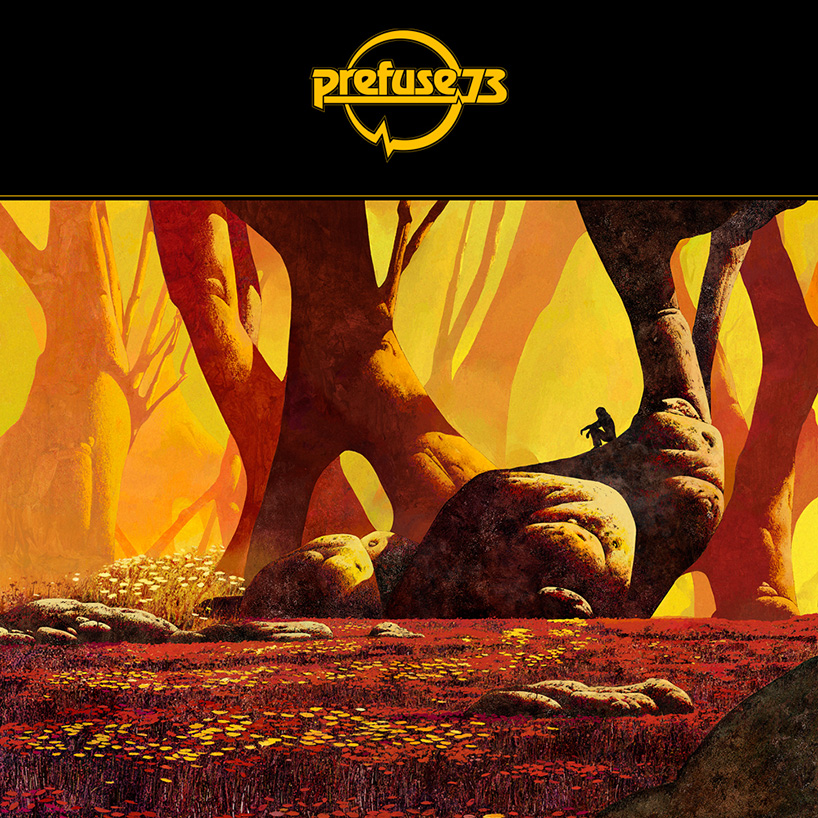 ‘the forest of oversensitivity’ for prefuse 73 / warp records, 2009

DB: what criteria do you use to judge what you want to explore in an artwork?

DM: 90% of my work is client-based so I always have to be mindful of the brief. fortunately I’m often given license to let my imagination run wild and explore some pretty ‘out-there’ ideas. sometimes an idea will strike me while I’m out walking the dog or driving and it will form like a still from a film that evokes a certain mood or feeling. they key is to somehow capture that lightning in a bottle and translate it into a painting. 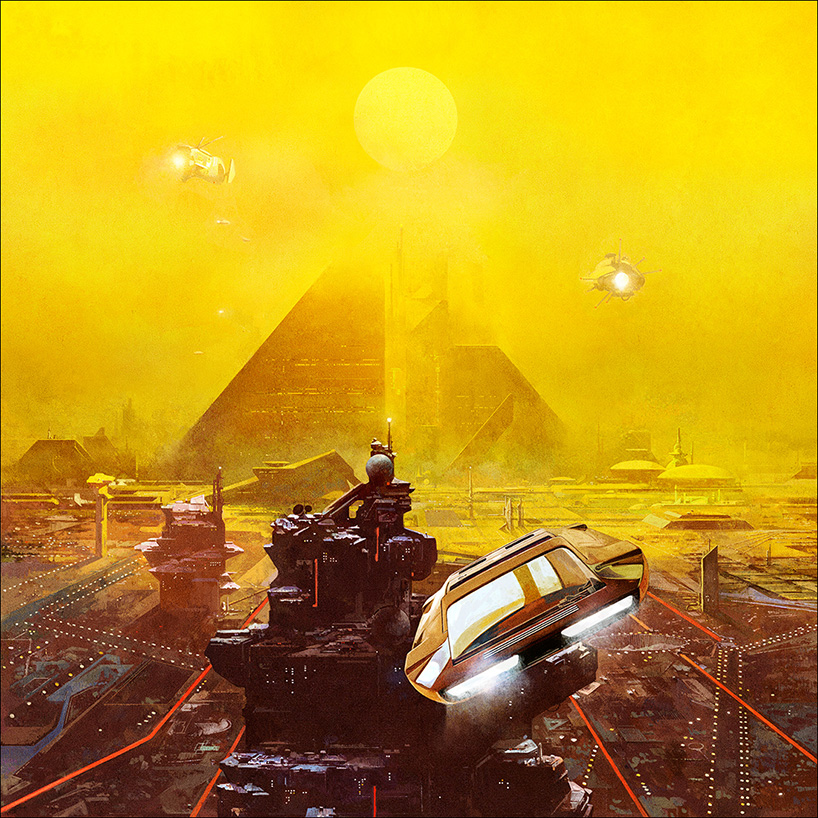 DB: do you enjoy working from a brief rather than having complete freedom?

DM: I think client work suits me quite well. having certain restrictions placed on the work forces me to think of creative solutions. record covers are my favorite kind of project because the connection (between sound and image) is often quite abstract and the client is usually open to exploring some interesting visual terrain. 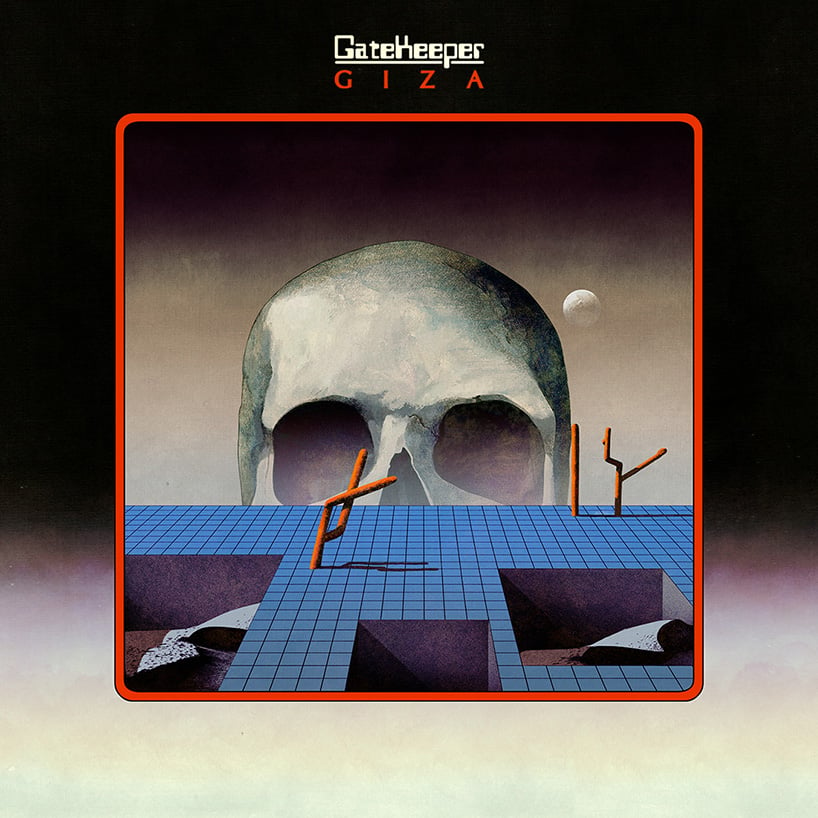 DB: what themes, materials or processes are you hoping to explore in your next projects?

DM: I’d like to get back into sculpture. I started exploring some new techniques a couple of years ago using styrene and epoxy putty and I have a bunch of projects on my desk that are probably 50% completed. I just need to find the time to finish them off. in terms of my paintings, I definitely think my figure work needs improvement. I’m hoping to sharpen my skills by doing some life drawing soon. thematically, I have some ideas for a series of spaghetti western inspired pieces, with a few science fiction elements thrown in for good measure. I’m also working on an iPad game with a friend which is great fun. there is a completely different process involved in creating art for games which I really enjoy. 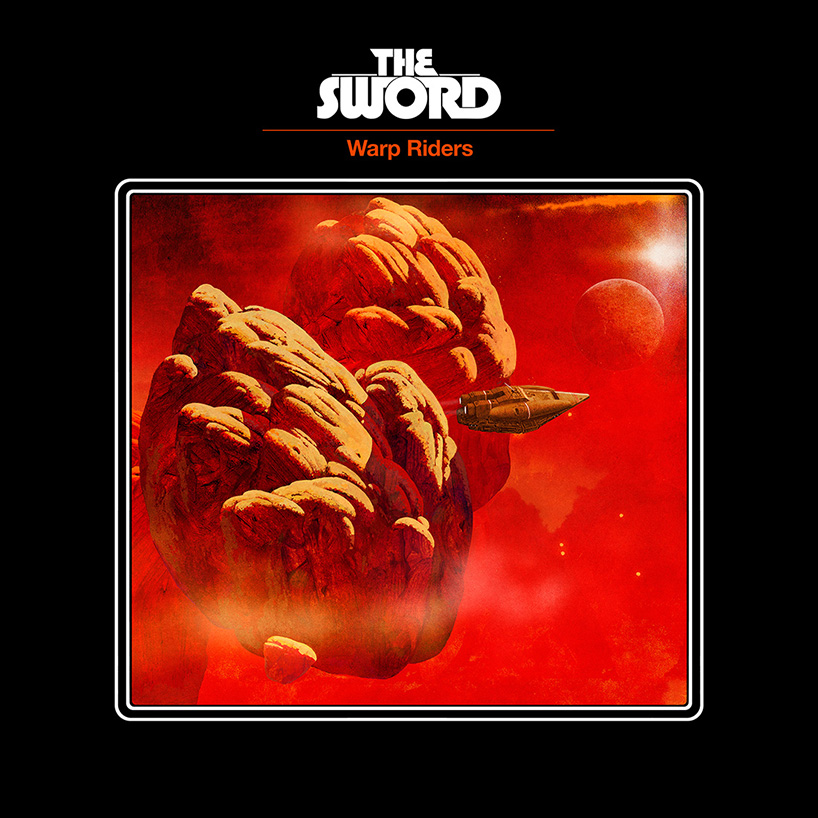 DM: it might sound like a contradiction, but I actually think looking to the past is the most lucrative place to find new ideas. there is so much history to be mined. ancient architecture, military uniforms, tools, vehicles, mythology; history is an almost limitless well of inspiration waiting to be transformed and re-contextualized. 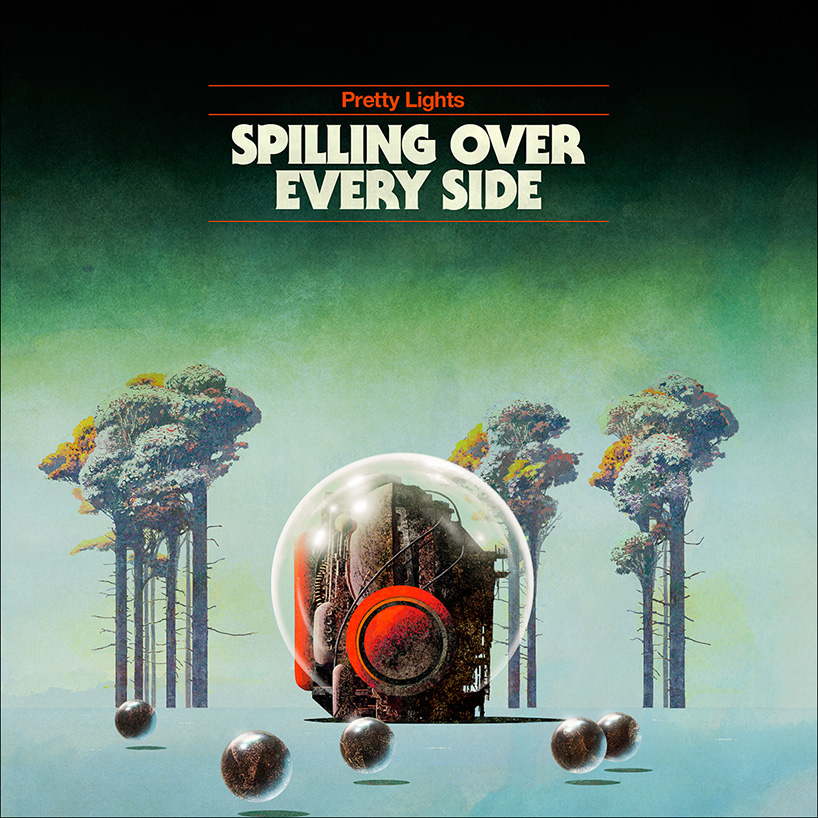 ‘spilling over every side’ for pretty lights, 2010

DB: what are you currently fascinations by and how is it feeding into your work?

DM: I’ve become a bit obsessed with minerals lately. when I was young my dad had a collection of minerals and precious stones that fascinated me. the idea that these objects of immense beauty are sculpted over millions of years in the belly of the earth still fills me with awe. lately I’ve been drawing a lot of colorful agates, as well as forests of fossilized corals and plants. I hope to be able to share these works soon. 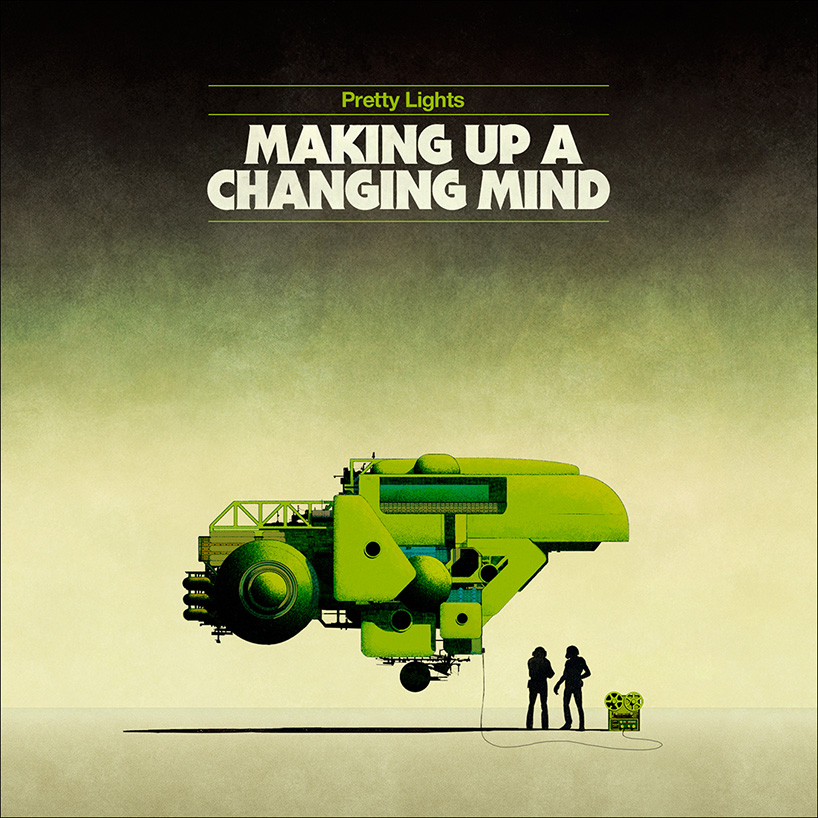 ‘making up a changing mind’ for pretty lights, 2010

DB: do you have any superstitious beliefs or self imposed rules that you live by?

DM: definitely no superstitious beliefs. self-imposed rules… hmmm… when I’m working I often have a little voice in my head that says ‘if in doubt, leave it out’ which reminds me that less is more and if something isn’t working I should ditch it. 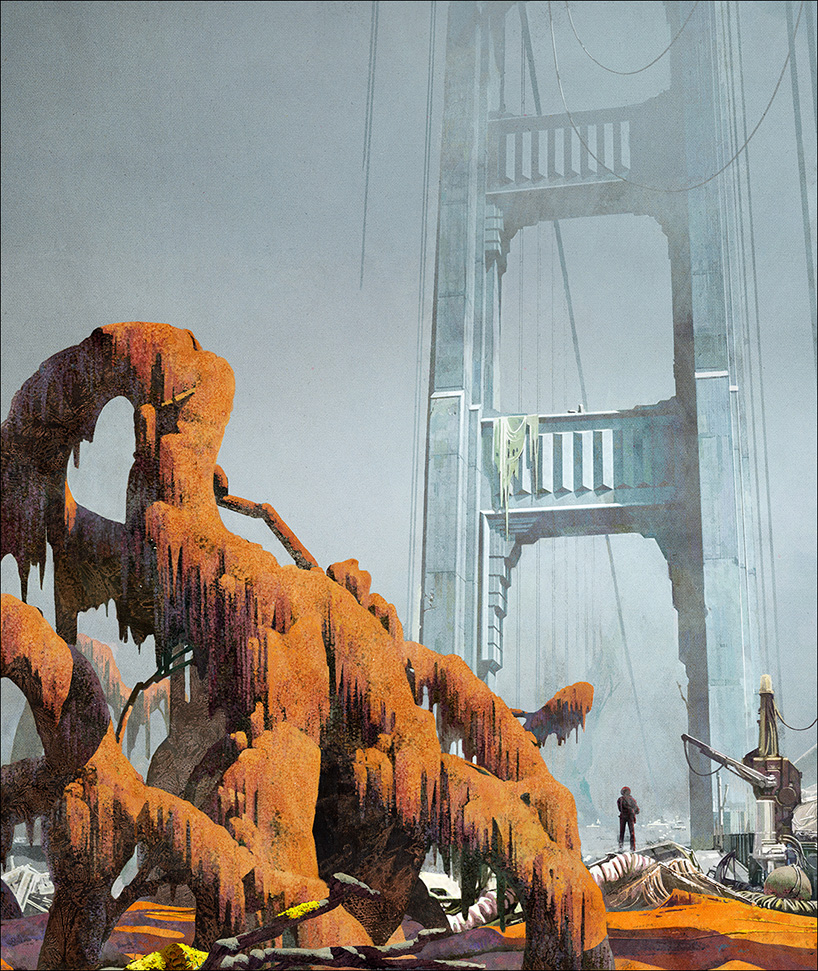 DM: I think at 21 I felt like in order to be successful at anything in life, I had to become a cog in a much larger machine. but I think as I’ve gotten older I’ve come to believe that this really isn’t necessary or even desirable. in youth, we tend to think of the world as set in stone, unchanging, with rules laid down by the generations before. but those generations die out and the rules change. and it doesn’t take any secret knowledge to change the rules; just courage and imagination.

May 10, 2021
virgin mary. supermarkets. popcorn: miles aldridge on his cinematic and chromatic tableaus
designboom spoke with the british artist and photographer about his cinematic heroes, the magic of film photography, and slowing down the image making process.
art
307 shares
connections: +280