rolf sachs on his ‘typisch deutsch?’ exhibition at MAKK
portrait by byron slater

what does it mean to be ‘typically german’? is it an adherence to rules and regulations? is it a strong work ethic and a love of bureaucracy? are germans really perfectionists when it comes to cleanliness and tidiness?

designboom caught up with artist and designer rolf sachs to discuss the concepts addressed in the works being presented in his exhibition ‘typisch deutsch?’ at the MAKK in cologne, germany. 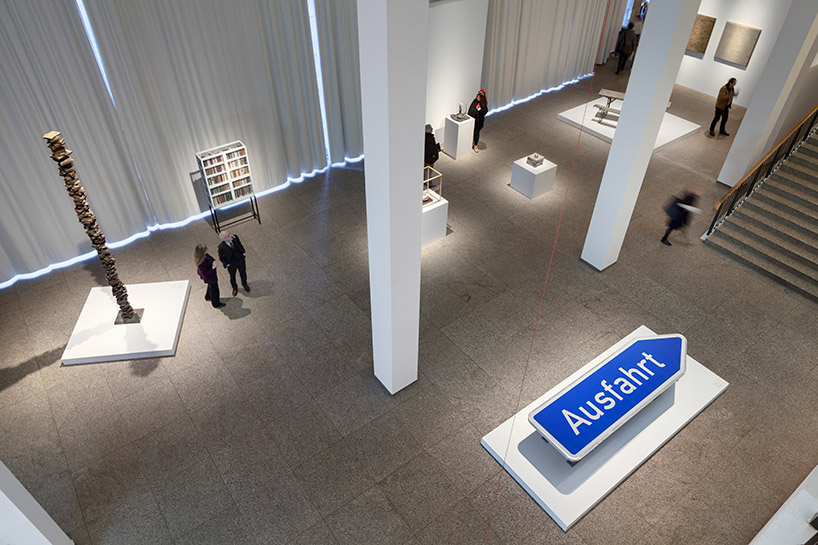 designboom (DB): how did the ‘typisch deutsch?’ exhibition come about?
rolf sachs (RS): basically it is a theme which I felt was hanging in the air for the last four or five years. living in london, I have seen how the perception from england and also from other countries has changed towards germany.

DB: were there particular observations that brought this theme to your attention?
RS: one of the catalysts that is often mentioned is the joyful 2006 european football championships which were held in germany, while others point to the very liberal political attitude in germany right now. then there are bigger, over-arching factors; it’s got its economic might and has played a big part in the cultural scene in the last fifty-to-sixty years. if you look at art in particular, in the west you can see a clear shift in the importance from the catholic countries to the protestant countries, which of course germany is a part of.

I wanted to try and capture some of these things that I’ve just mentioned and try to show a little bit of what I think germany is. the thing that made me sure to go ahead with the exhibition was the book by peter watson called ‘the german genius: europe’s third renaissance, the second scientific revolution, and the twentieth century’ written by peter watson, which is a cultural history covering everything from from bach, goethe, and schopenhauer to nietzsche, freud, and einstein right up until today. in the book it illustrates very clearly the incredible educational and philosophical background that germany has had over the past few centuries. of course we have a huge shadow in our recent history, which germans will never, and should never forget, but it is not everything about germany. so the exhibition was a chance to add my thoughts to this theme. 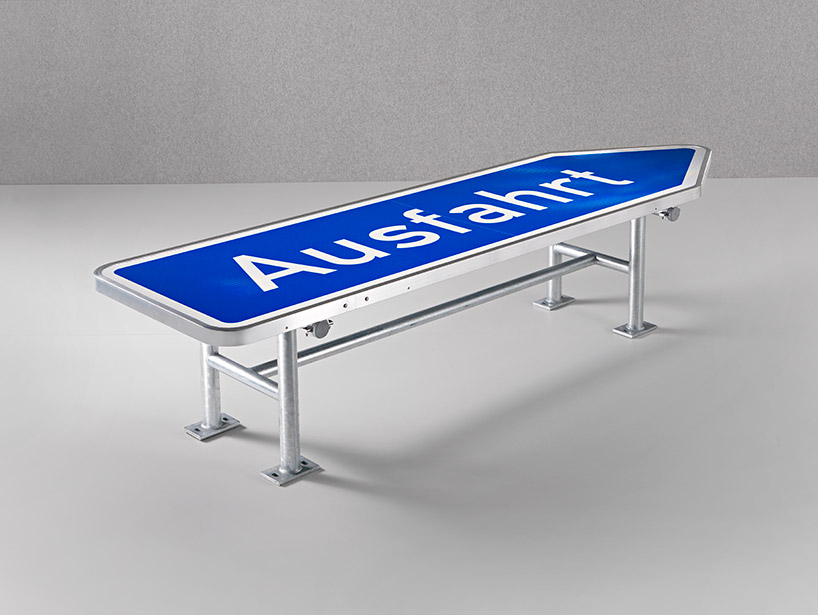 made from a giant ‘ausfahrt’ (exit) sign from a german motorway, the ‘die autobahn’ bench illustrates an affection for the everyday object; the often overlooked and under-appreciated designs and archetypes we encounter in our daily lives. 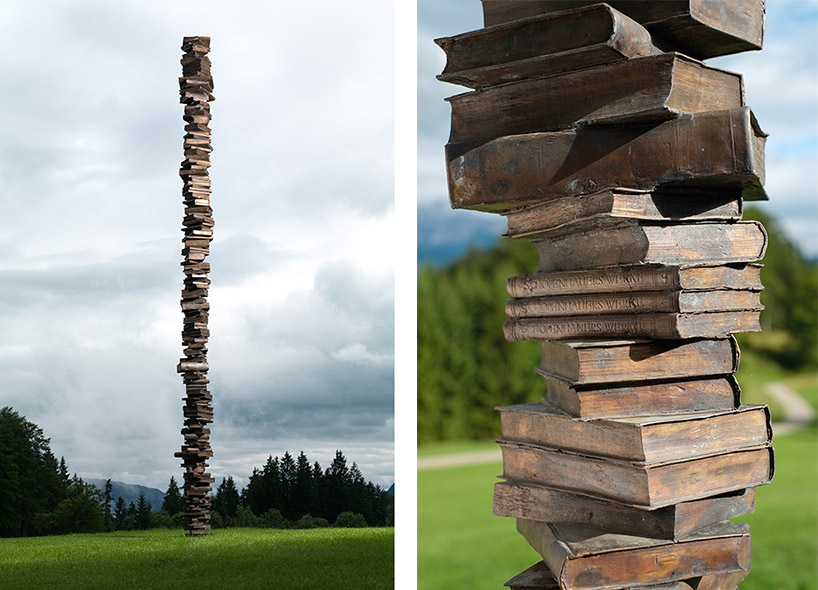 reminiscent of constantin brancusi’s endless column, ‘the endless mind’ is an homage to the incredible versatility and significance of german intellectual thinking. in chronological order, from the time of creation onwards, it represents a never-ending search for knowledge, with highly valued works of german literature, the humanistic and natural sciences piled up to an impressive pillar, symbolizing the eternal pursuits of human thinking, research and perception. 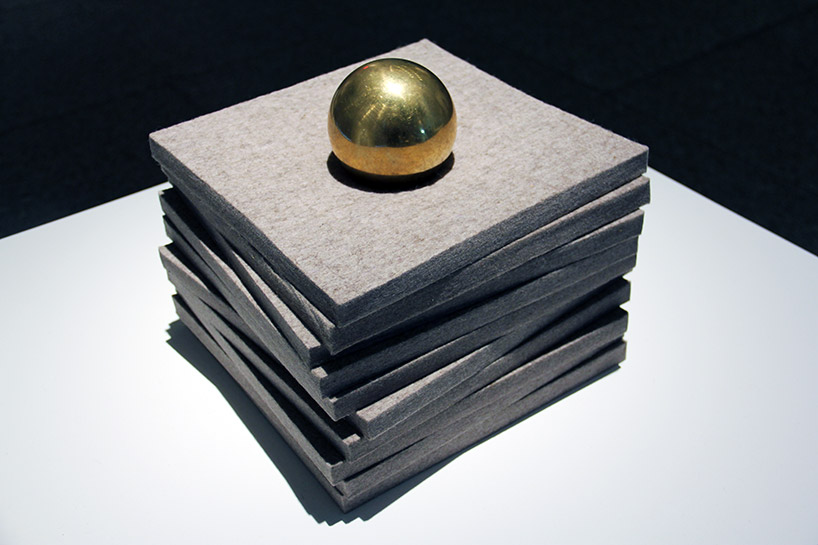 the artist explores the ‘weight’ and ‘burden’ of melancholy, with a sculpture that subjects a delicate piece of felt to the pressure of a solid brass sphere; evoking the spirit and conflict of ‘schwermut’ (melancholy). 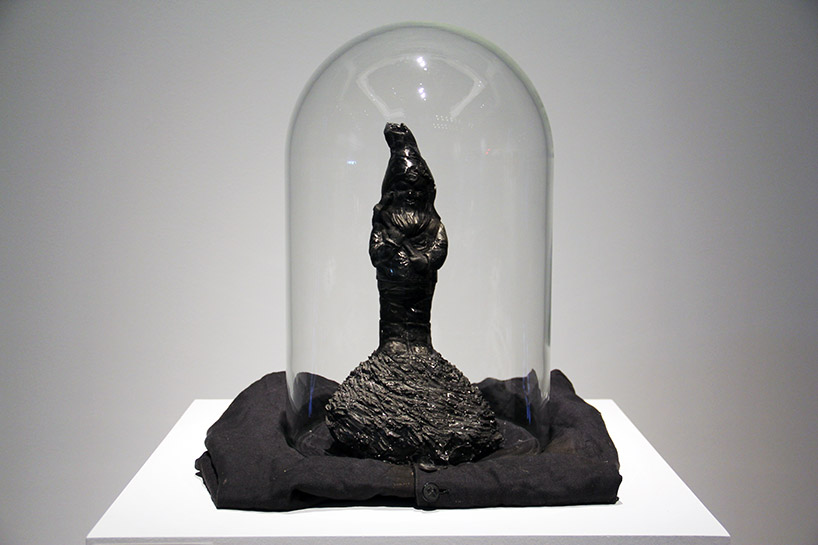 the germans are said to embody this sense of determined assiduity, with their industriousness rooted in their middle-class virtues. the gnomes of nordic and german mythology are hardworking miners, metallurgists and curators who possessed a variety of skills. their industrious attributes found them used as a symbol across allotments everywhere, as the garden gnomes. 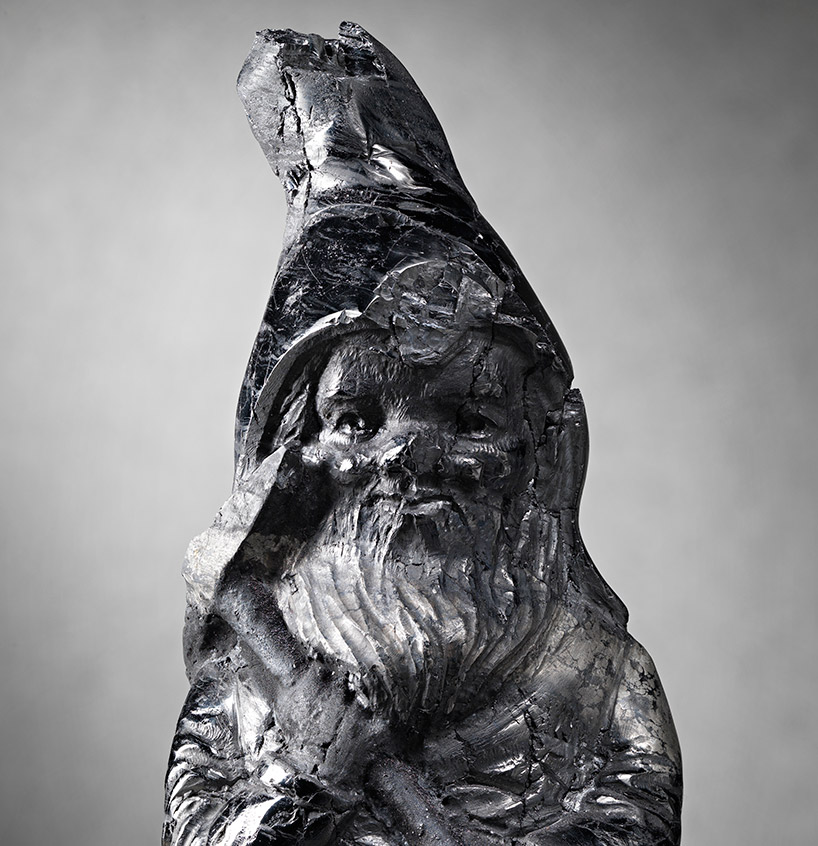 DB: how have your views on germany changed from growing up until now, living in england?
RS: one of the most important things in the history of germany was luther and the reformation, which brought about this idea that one should be a puritan and hard working – that those things will bring you fulfillment. so that in turn gave birth to this very strict culture and mentality and a lack of flexibility. the product of that was writers and philosophers and painters who started the romantic movement which went against the rigid thinking of the time. part of that strictness will always persist in german culture but today there is more flexibility among germans. in general I think people across the world are less strict on themselves and in their conduct, it’s the same here in england.

DB: what perspectives has living outside germany given you?
RS: many things. I never was aware of just how precise and rigorous the germans are until I traveled and lived abroad. infrastructure, in the home, bureaucracy – everything is done very methodically and in an ordered way to a level of precision I haven’t seen anywhere else, except perhaps in switzerland – which in many ways is quite similar. I have also noticed qualities in other countries and cultures that the germans are not as in touch with, in britain it would be humor and a lightness of being that’s more evident. but every country has benefits and drawbacks to its culture. 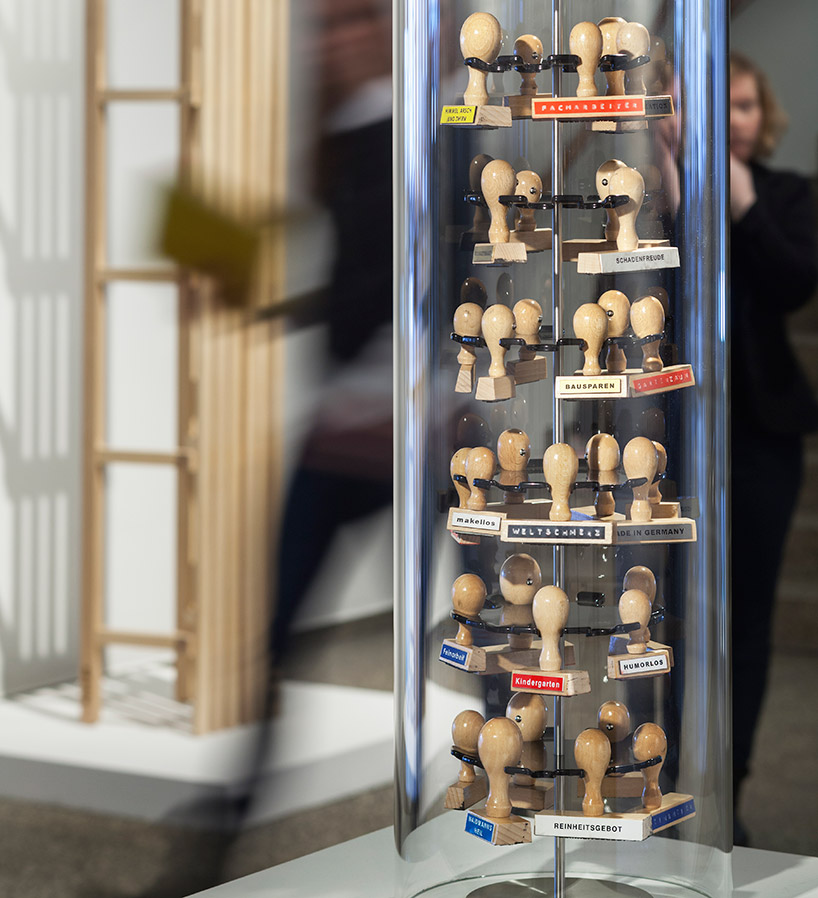 using martin gerhard reisenberg’s comment as its starting point; ‘as soon as the first stamp exists, an office very quickly forms around it’, this humourous, conceptual piece affectionately comments on the german love of paperwork and bureaucracy, in the form of a series of ink stamps displayed on a one meter tall stand, with words from german popular culture and history. 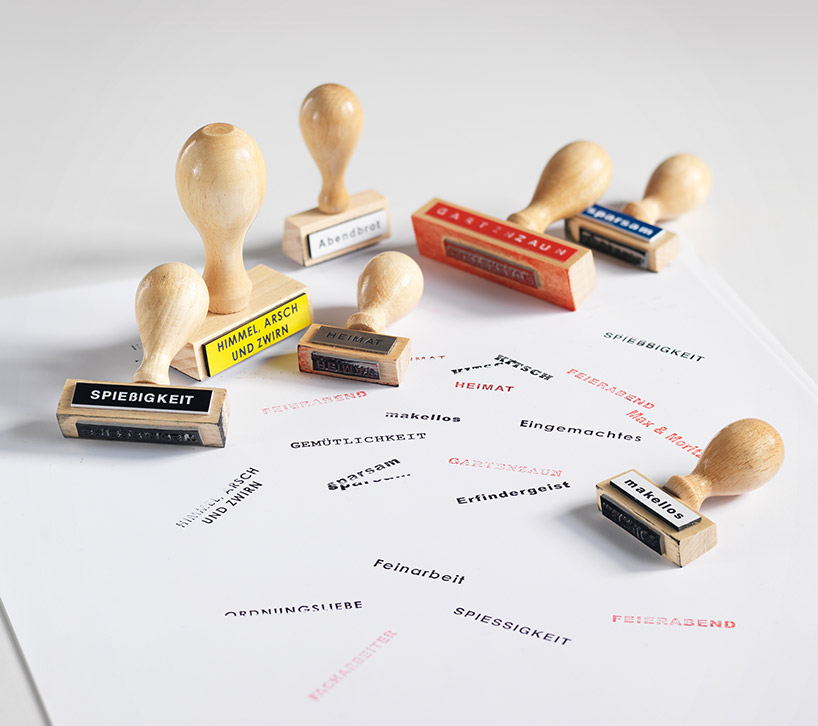 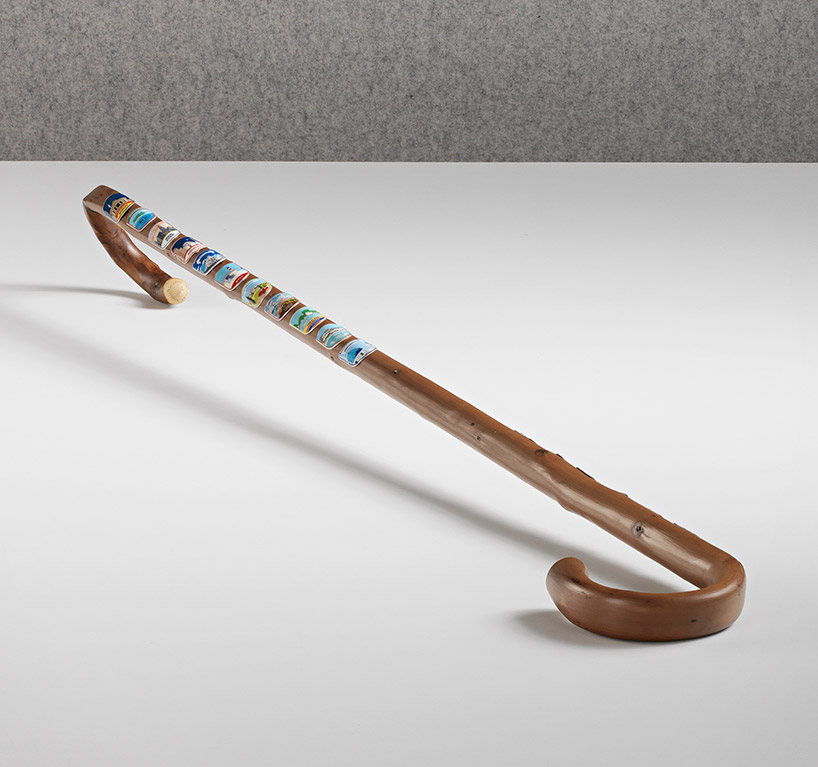 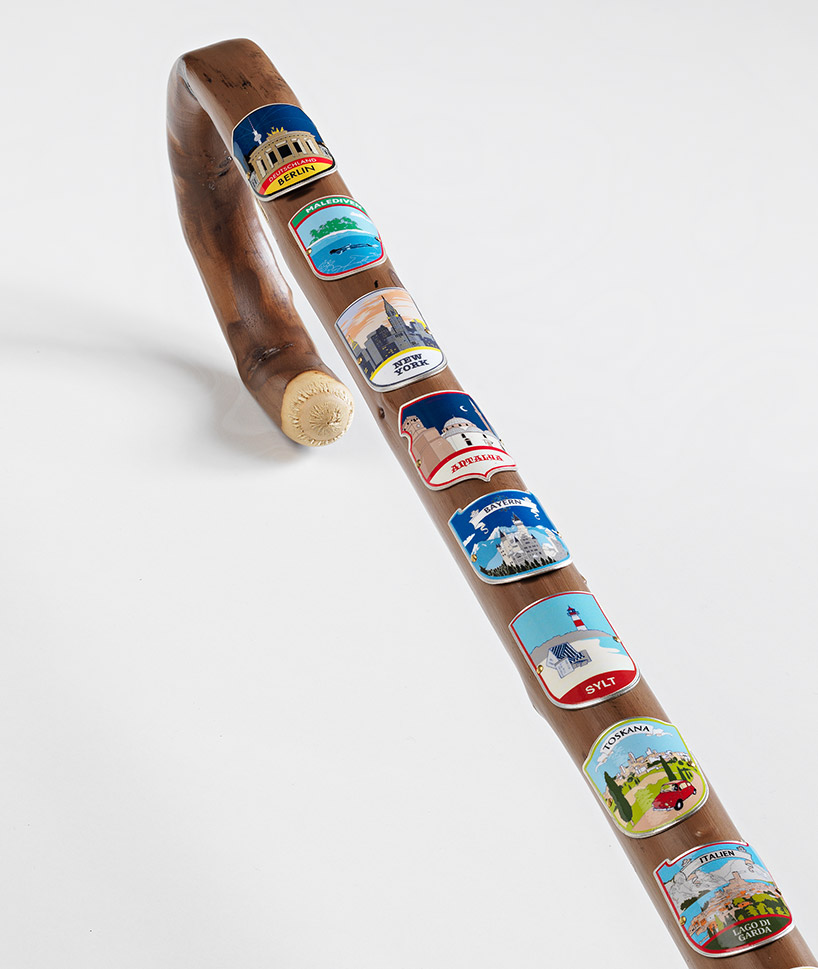 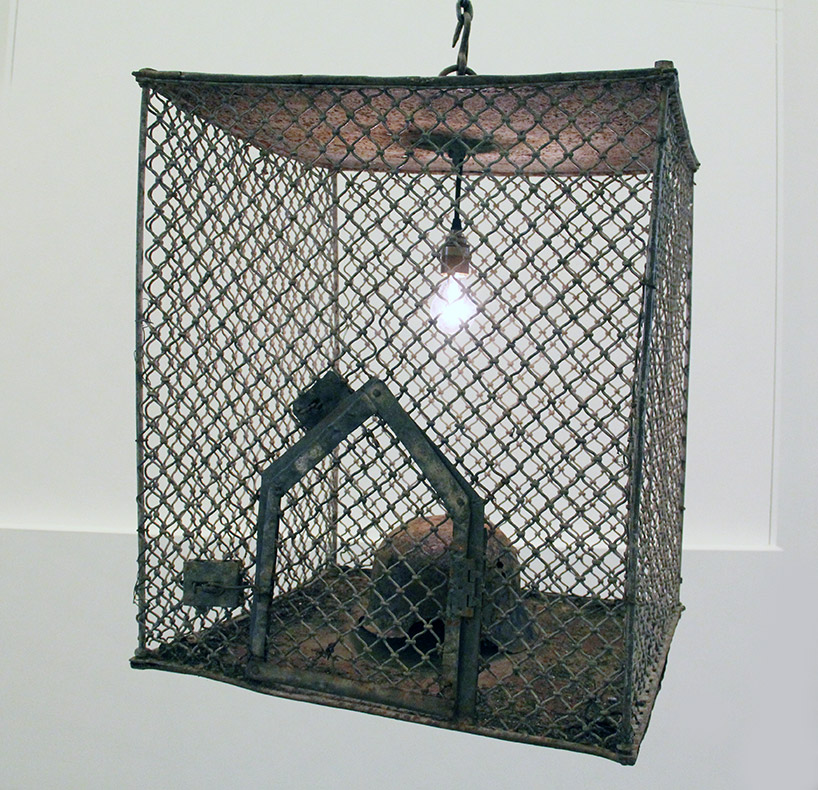 in 2014, europe will commemorate the 100th anniversary of the beginning of the first world war; a poignant time to shine a light on that aspect of german history. since germany was responsible for both world wars, this commemoration is an artistic consideration of the dark side of german history, making it clear that germany was not just a country of poets and thinkers, but also a country that committed appalling atrocities and there is a moral obligation to never forget. 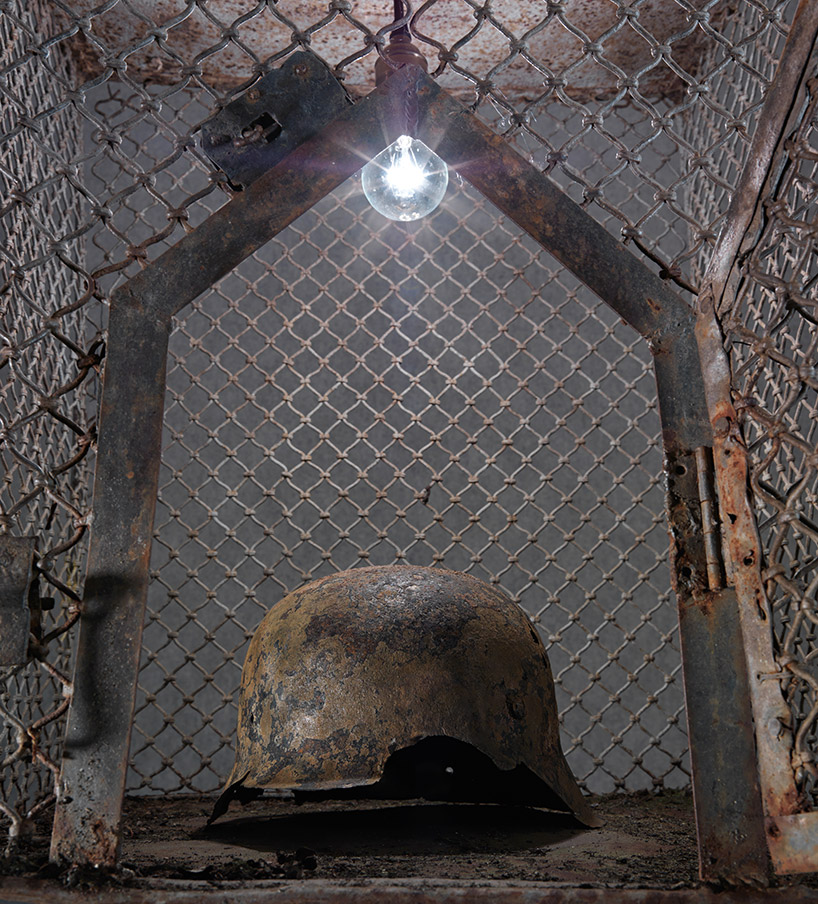 DB: were there specific aspects of german culture that you wanted to approach with the new pieces?
RS: there are basically two key things I wanted to cover; one is the strict and straight thinking german mentality, concerned with punctuality, cleanliness, industriousness and hard work ethic. the other is a philosophicalness that has run deep in the culture for many centuries, such as romanticism and melancholy, doom, angst, wanderlust, nudism, which are themes very specific to germany.

DB: which of those themes did you enjoy exploring the most?
RS: for an artist the themes where you have the chance to add your own intuition into the piece are always the most enjoyable and satisfying and so the philosophical topics were the ones which I liked exploring the most.

DB: does any particular piece stand out to you?
RS: I like the piece ‘yearning’ very much, which explores the equilibrium between rationality and emotion. 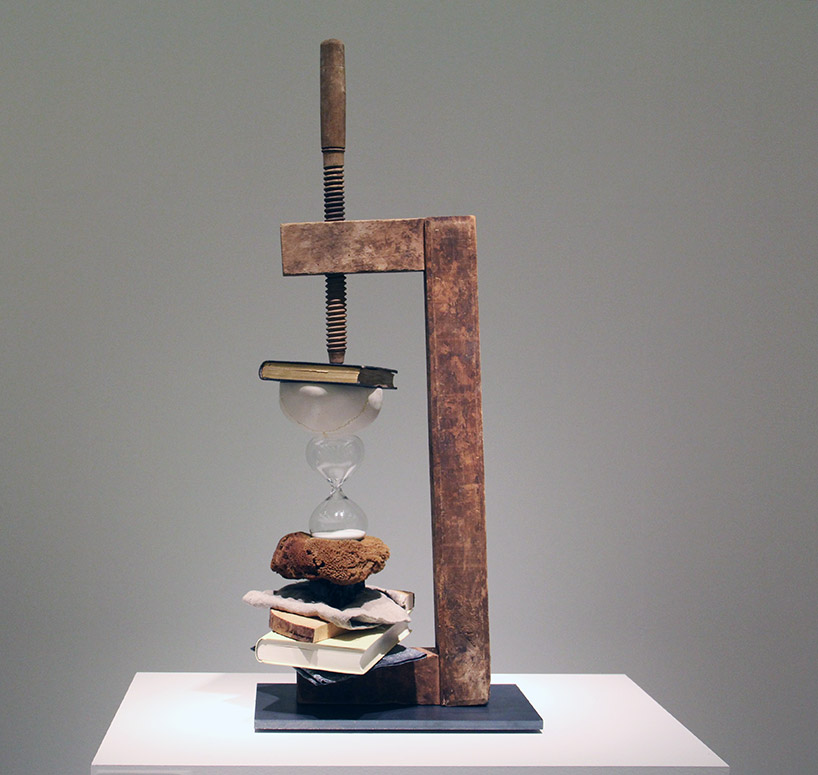 the internationally recognized term ‘angst’ originates from the german language. it refers to a dark fear and a sense of uncertainty, which was a uniquely german mood. during the sturm und drang period, one sought refuge from these fears in dark, gloomy moods and weltschmerz. through philosopher martin heidegger, angst became the veritable leitmotif of 20th century germany. he described angst as a basic disposition of the human being. 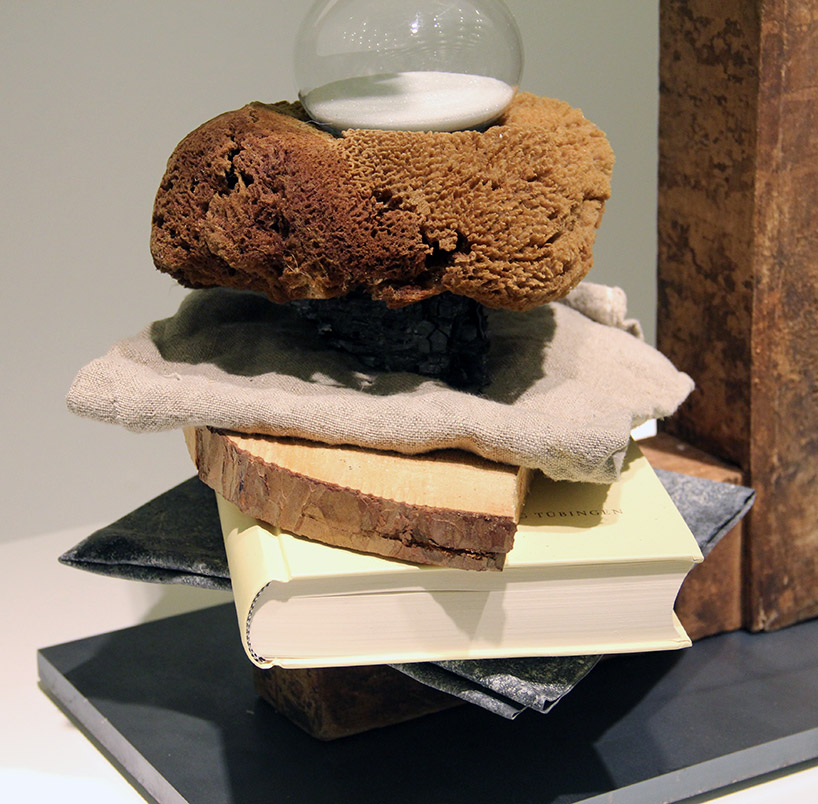 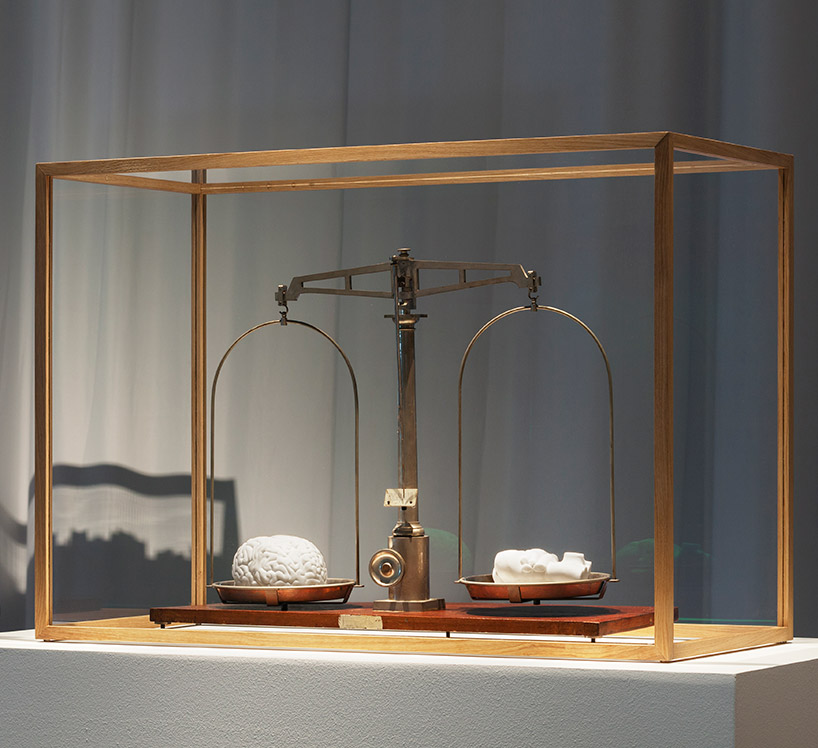 a human heart and brain, hand-carved from marble, sit in perfect balance on a set of vintage weighing scales, creating a powerful motif where logic, emotion and memory merge, illustrating the need for balance between the ‘head’ and the ‘heart’. 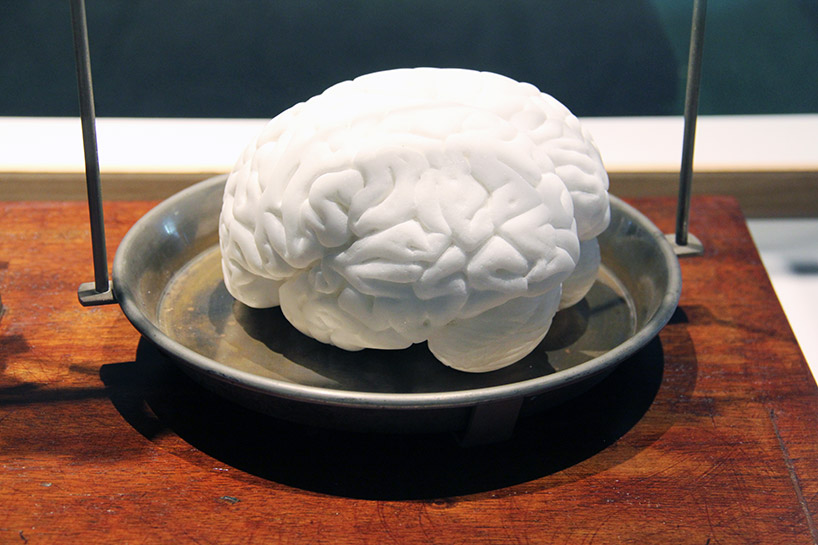 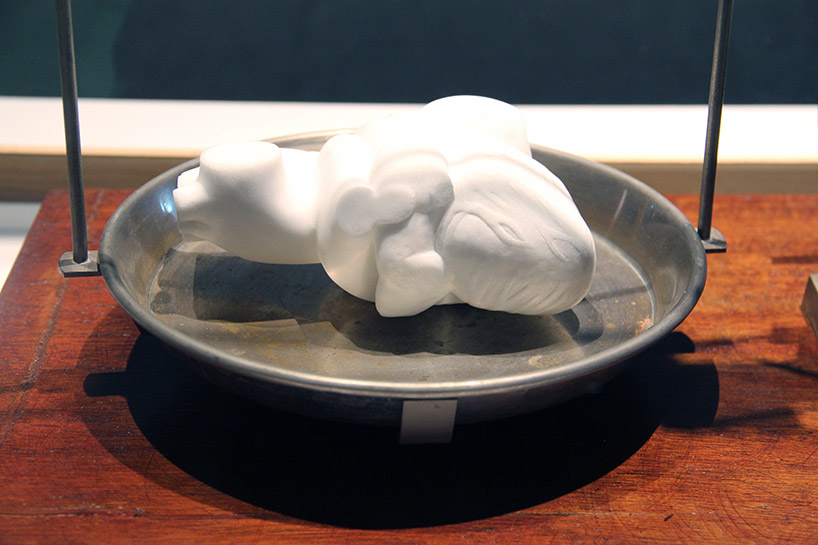 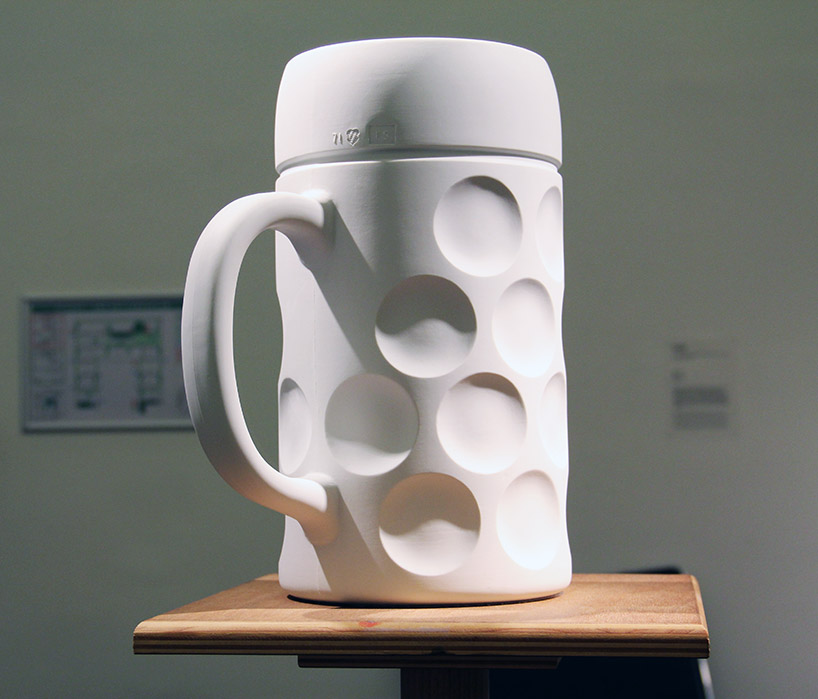 a handcrafted, over-sized, seven-liter maß tankard, produced in partnership with nymphenburg porzellan manufaktur, celebrates the brewing traditions in germany, while drawing attention to this unnoticed, yet familiar object. often used boisterously, the use of white biscuit porcelain belies its traditional function and calls for the viewer to respond to its pure form, free of practical purpose, and represents the relationship between measure (maß) and moderation. 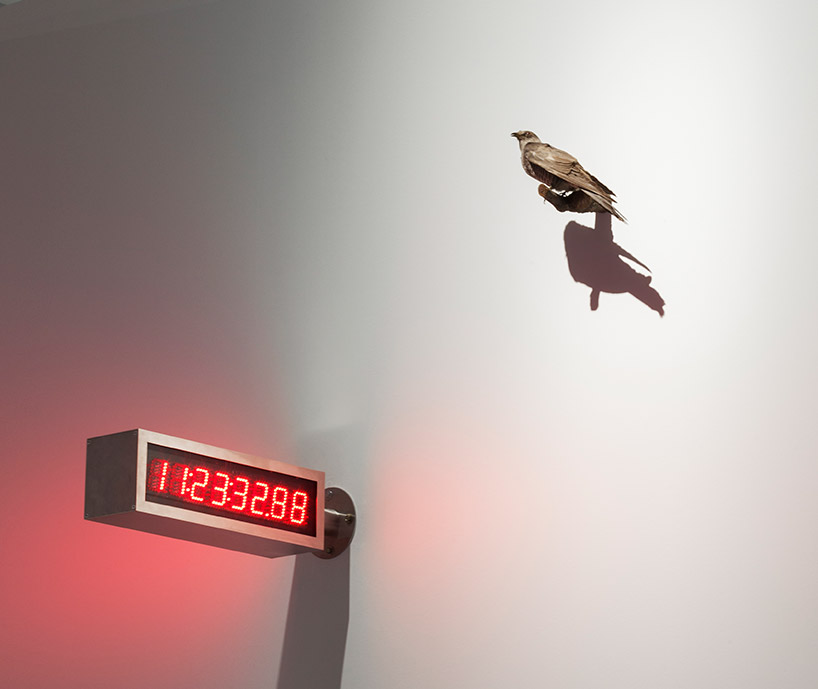 DB: what have you learned from putting together this exhibition and body of work?
RS: I have realized is that visitors to the exhibition like very much that they can grasp the concept.  that is something which has given me a lot of pleasure. with much of the art produced today it’s difficult to grasp the concept, I’m not saying that all art should be easy to understand at all, but I think I will peruse concepts that are more intuitive and accessible.

DB: please could you tell us what you are working on now or next?
RS: I’m currently working on a photographic project, a conceptual photographic project that’s called ‘camera in motion’ it will be shown at the amman gallery in cologne this april. I documented a UNESCO world heritage train line, which goes over the alps in switzerland – the pictures are quite interesting, using a camera designed for still images to take images while moving. the images have a certain velocity to them and a certain depth. 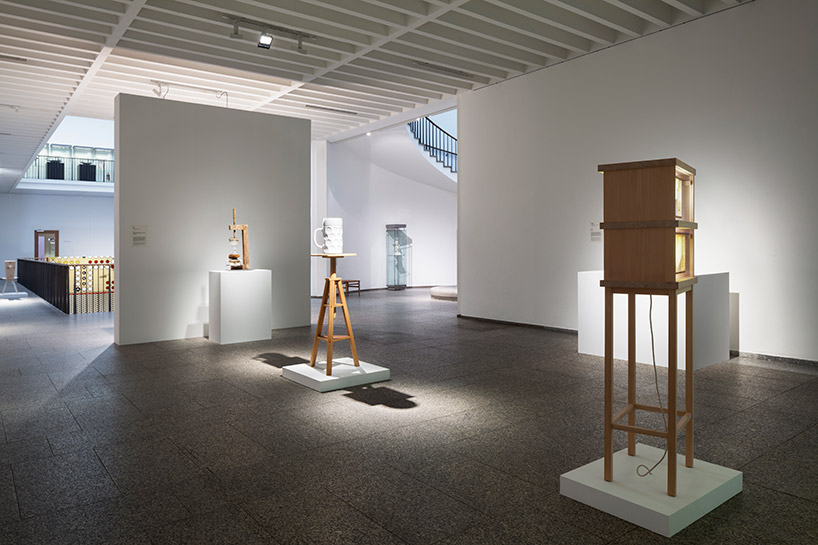 view of the exhibition
photo by constantin meyer


a bronze beer-garden table and benches evokes the social traditions of german culture, while celebrating this utilitarian and often overlooked style of furniture, turning it from a piece of transient furniture in to one with sculptural permanence.


playfully acknowledging the german people's supposed cautious approach to spending, viewers are invited to voyeuristically peer through a peephole to see piles of coins within the secured box, with the key to the box locked inside.


the 'herzschuss' (shot to the heart) chairs, wittily draws on switzerland's history of marksmanship, by shooting out the traditional heart-shaped detail of the 'stabellenstuhl' chair, which here is minimally re-imagined - keeping the emotional resonance while removing any unnecessary decoration.


the adjective 'rooted' exists in many variations. it can refer to the practical predisposition of a person, the relationship to the area in which a person has grown-up and a more general attitude towards values and traditions. when the term 'rooted' is used in the context of a person's homeland, it creates a powerful, emotional response where a variety of impressions present themselves, including people, buildings, smells, language and landscape. 'down to earth' or 'rooted' implies straightforwardness and a close connection with reality.


a wooden floor lamp displays a collection of illuminated beehive frames, where the tireless activity of the honeybee is used to symbolize the strong work ethic and assiduity of the german people.


an affectionate satire on the german love of recycling, this installation of brightly-coloured bins interprets german conscientiousness with an ironic twist, offering an invitation to dispose of negative character traits, including envy, stubbornness, humourlessness and intolerance. 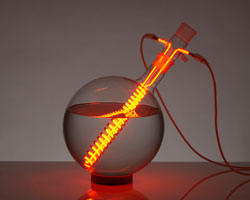