from now through november 21, 2020, massimo de carlo’s london gallery presents a solo exhibition by korean artist yeesookyung, highlighting the rich practice she has developed over the last two decades. titled I am not the only one but many, the exhibition presents the artist’s most well-known series, ‘translated vase’, where delicate shapes have been created out of discarded ceramic fragments. the series has its origins in a 2001 visit to one of the modern masters of korean pottery where, upon witnessing the potter destroying vases deemed flawed in their pursuit of perfection, yeesookyung recuperated the broken shards and reconfigured the fragments into bulbous and deeply personal forms. the artist intervenes by seaming together the fragments with epoxy delicately covered in 24-carat gold leaf — a process akin to the centuries-old japanese art of kintsugi — thus creating simultaneously voluptuous yet fragile works.

coinciding with her exhibition at massimo de carlo, designboom spoke with yeesookyung about the preservation of traditional korean ceramics, and the narratives she seeks to translate through forgotten fragments. 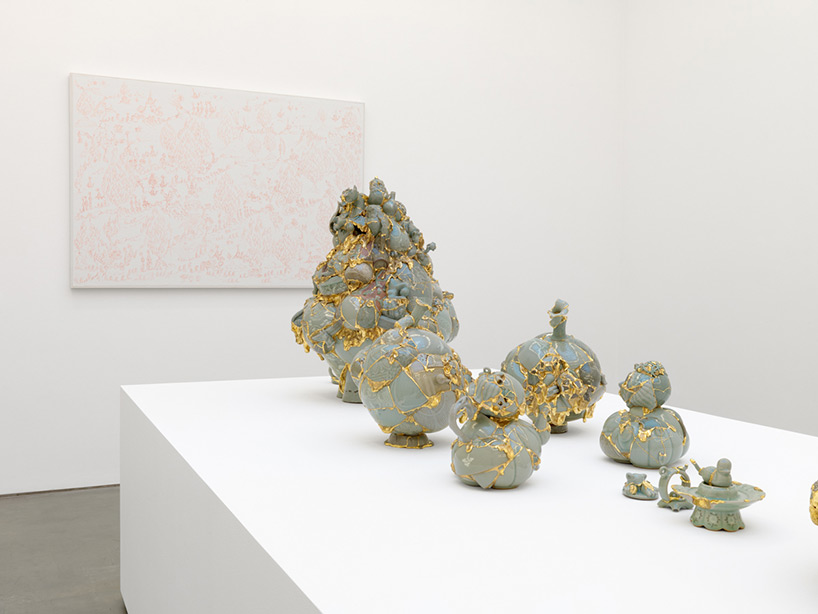 designboom (DB): what aspects of your background and upbringing have shaped your creative principles and philosophies?

yeesookyung: since I was very young, art has alchemized my fears, sorrows, obsessions and delusions into glamorous, fertile and amusing works — just like I covered the crack, the wound, with a valuable thing, gold. art has been expanding my own parameters and encourages me to celebrate the vulnerability of beings. for me, art is a shrine (sacred place) to learn more about the world, which has a full force of nature and unknown, powerful energy underneath. it also provides me with a magical vehicle to view a glimpse of transcendence that makes me want to be a different person day by day. it triggers my urge to excavate the real world that is tangled yet metaphysically structured, which proves that everything is perfect. 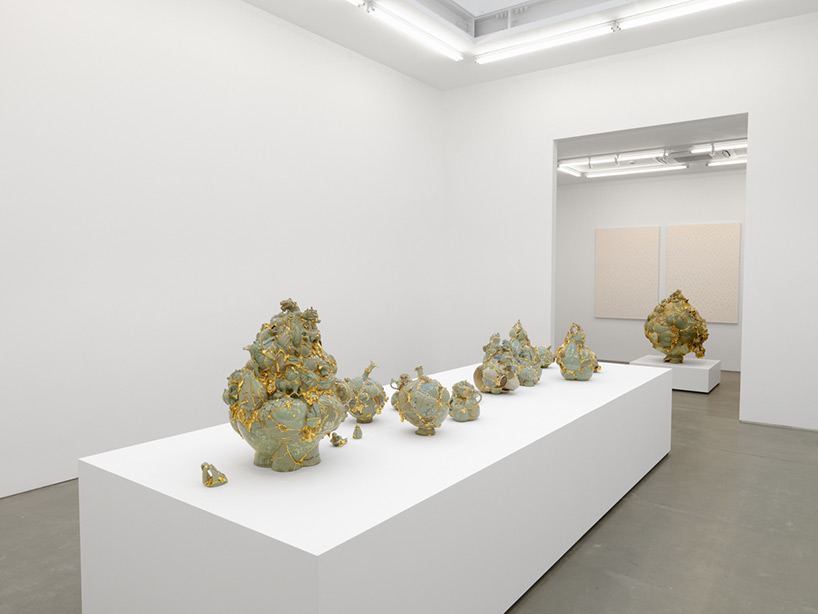 DB: your ‘translated vase’ series consists of sculptures reconstructed from discarded ceramic fragments. what has driven your interest in the art of repair, and the ‘kintsugi’ technique?

yeesookyung: I am fascinated by all things ephemeral that break, get damaged, fail, or disappear. looseness caused by such weaknesses creates new narratives by freely fusing and joining objects. but all in all, I have no intention of healing or fixing the objects. rather, my work can be seen as glorification of the fateful weakness of being, including myself. gold, one of the most important materials in my work, is used not to restore or heal, but to highlight that breakage and find a unique beauty in objects that sparkle in the midst of ruins. in the wave of the rise and fall of an object, the end of any phenomenon must follow a new beginning, so perhaps, time and space in my works are unfolding in another plane. particularly japanese viewers who are familiar with this japanese repair technique ask about ‘kintsugi’. when I started ‘translated vase’ in 2000, the cultural exchange between japan and korea was not as active, and the internet as well, so I didn’t have any information about this japanese repair technique. I choose gold just because in the korean language, the pronunciation of word meaning ‘gold’ and ‘crack’ is same as ‘geum’. it is a homonym. this is why I use gold to fill the cracks. using the shards from broken vases was kind of a taboo in korean culture, so it resulted in an emphasis on a flaw. 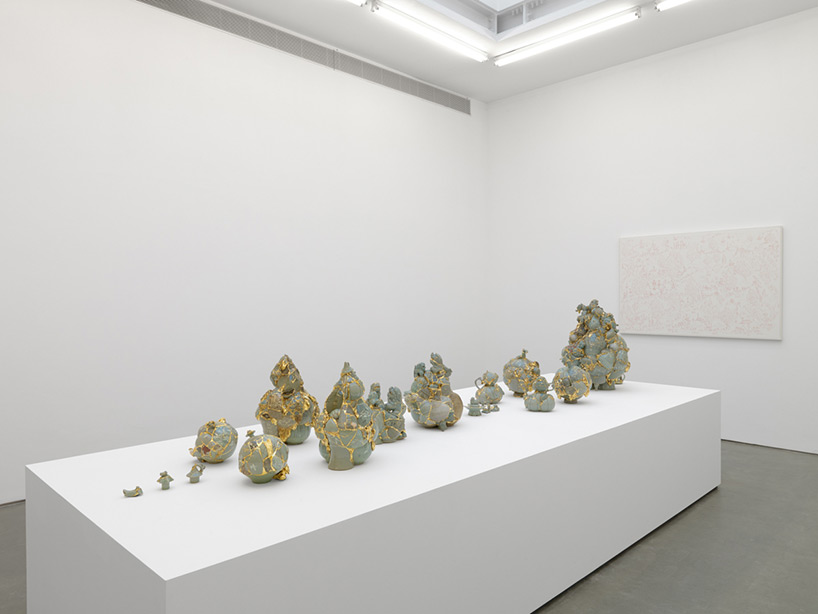 DB: what new narratives do you seek to translate through your adaptation of these fragments? are they contemporary, or do they seek to restore the history embedded in them?

yeesookyung: as an artist from korea, where a lot of cultural memory is lost, I expect the audience will find a way to connect the missing links between past and present, following the fragmented images. 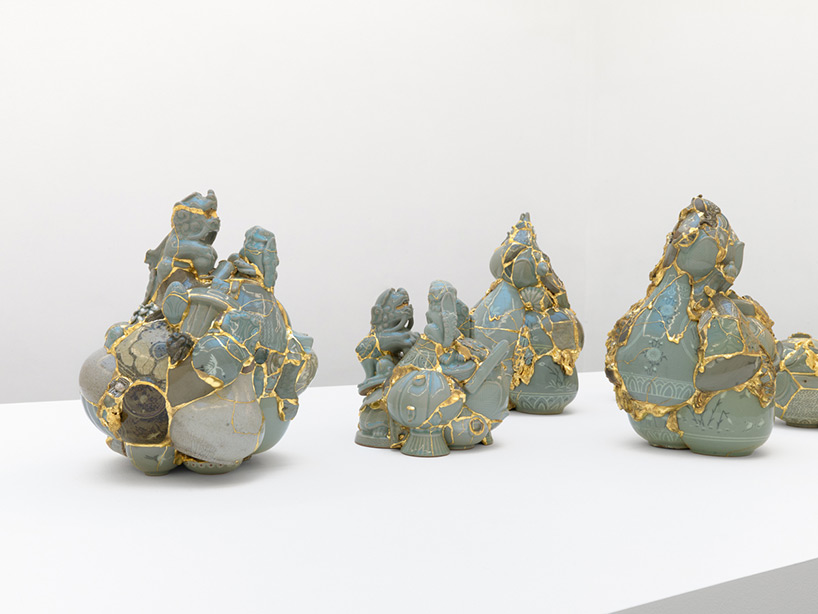 DB: why is it personally important for you to preserve traditional korean ceramics and ancient handcraft?

yeesookyung: the world is changing. some species become extinct. I am not willing to devote my artistic urges to preserving disappearing traditions. in global terms, we are always consuming global images. geographical borders, cultural divisions and even time orders are becoming vaguer in this connected world. I apply the traditional things I find as fragments to connect missing links and to expand my artistic vocabulary to express properly what I experience in this unexpected and perilous world. I am often mesmerized by the uncanny beauty of preserved tradition, but also to portray the transcendence of artists who find a way to build on traditional forms. the ‘translated vase’ series honors those who connect the missing links between traditional and personal artistic experience by following their artistic urge and liberating themselves from fixed tradition. 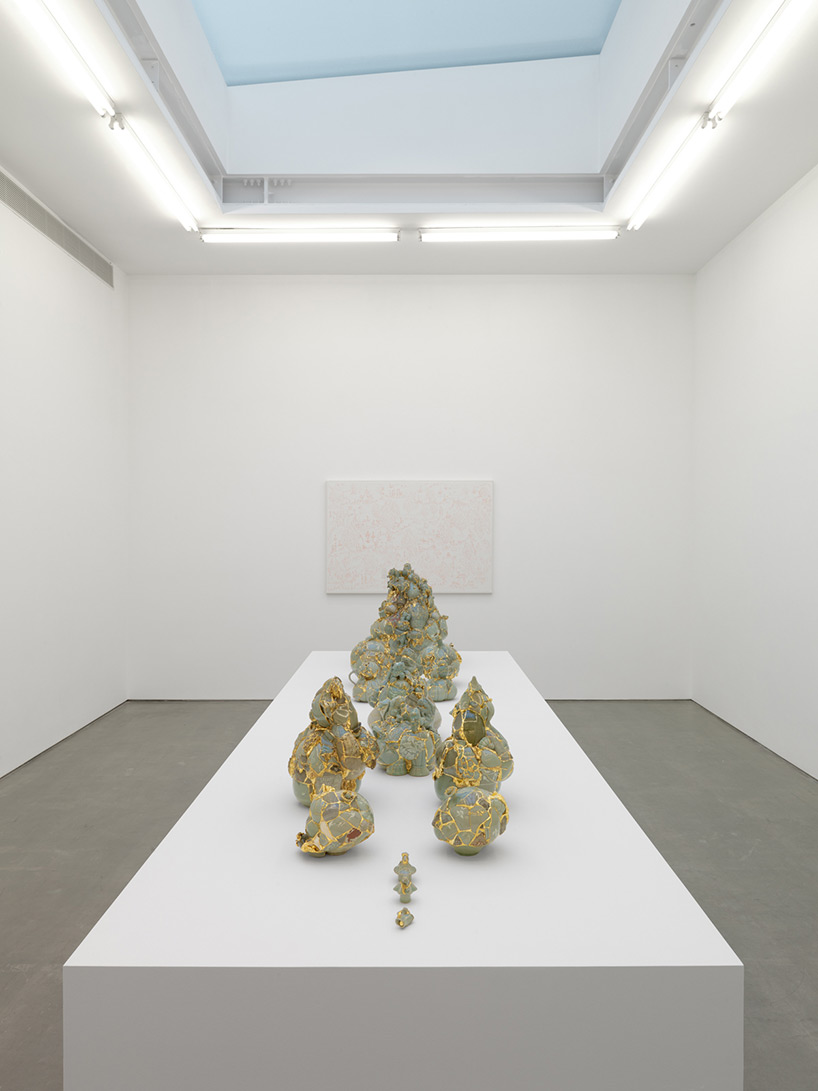 DB: where do you work on your projects, and what are the creative strategies you adopt when working?

yeesookyung: I work very slowly and repetitively. I keep on working because I can never predict what a sudden idea that pops into my head will turn into. while working, the process changes me and my beliefs. keeping the same degree of making and thinking is crucial in my work process. the state of calmness comes when my concentration is accompanied with the body and the mind working together. 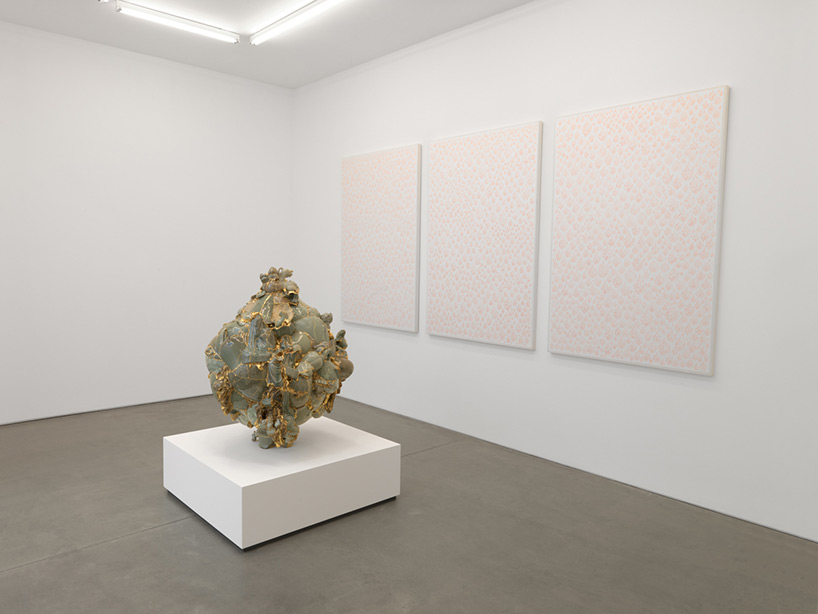 DB: what role does social or digital media play in the communication of your work?

yeesookyung: the ‘translated vase’ series comprises three-dimensional works, and the textural details are an important part of the series. so, it could be challenging to deliver this sense through the digital. but, the positive aspect of the media is the unforeseeable and organic growth of itself, and I think this is close to my working process. also, I think in these days of the pandemic, social and digital media helps viewers around the world approach the works. sometimes you could open up the imagination wider though the media. I expect the way of appreciating the artwork will evolve. 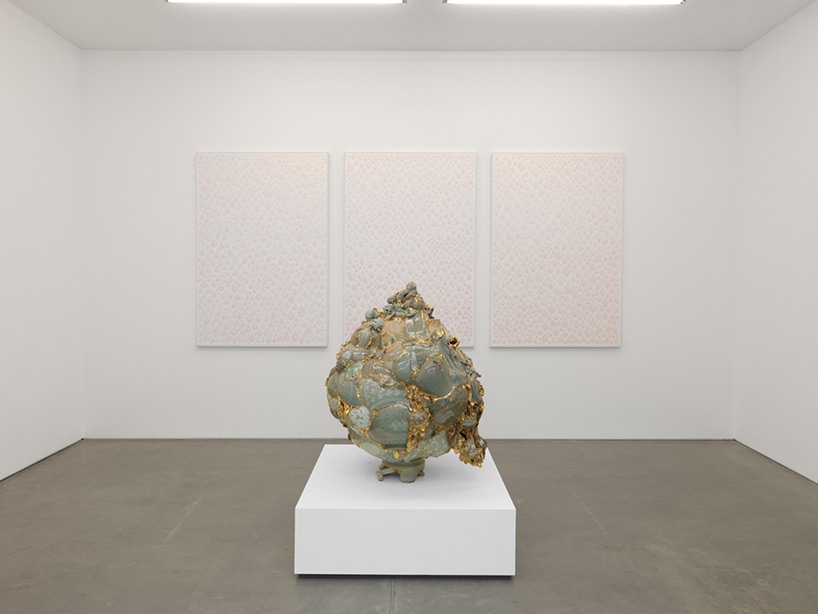 DB: what are you currently fascinated by and how is it feeding into your artistic practice?

yeesookyung: I have had an interest in the time and space of ancient times for a long time, in these days especially the silk road fascinates me. having grown up in 1970’s korea, educated under the myth of racial homogeneity and severe cultural censoring under military dictatorship, embracing fragmented identity and looking for missing cultural links to connect the past and present has become an inevitable underlying premise of my work, regardless of my intentions. I was fascinated by a research paper which I read in 2017 written by kim hongnam. kim wrote about stone with lion and peacock design (8th – 9th century), a large stone carving preserved at the gyeongju national museum. she researched the lion and peacock motifs — uncommon subjects during buddhist state silla dynasty, as they are more closely linked to early christian motifs — and traced their vibrant cross-cultural journey into the korean peninsula. her fortuitous discoveries helped me to understand internationalism and cultural diversity of the ancient unified silla period. recently, such interest has spread in my works as a culturally integrated form. 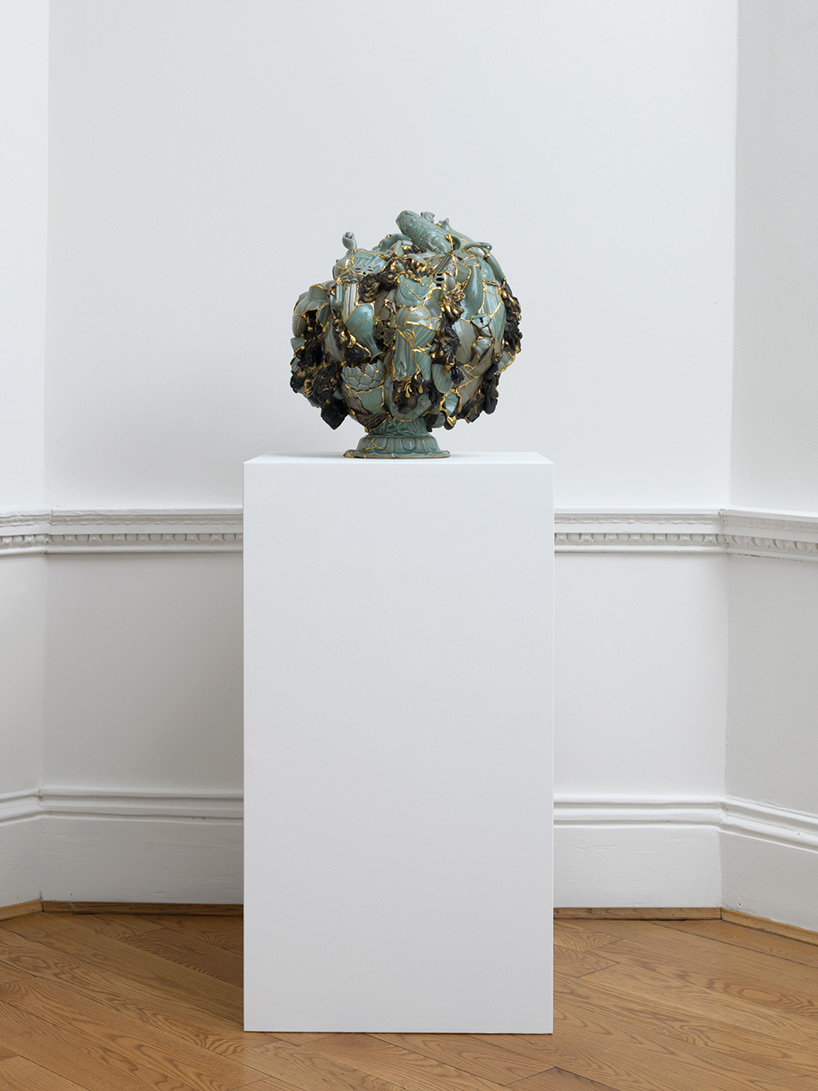 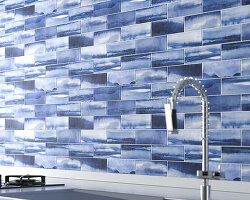 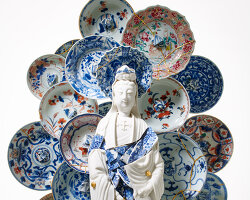 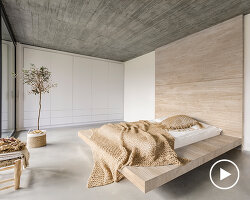 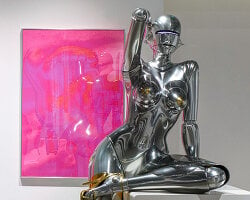 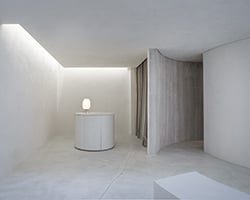 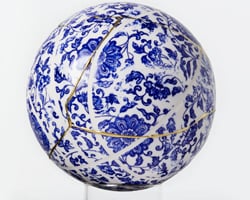 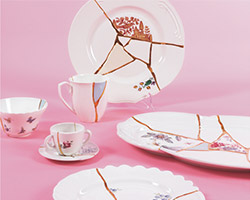 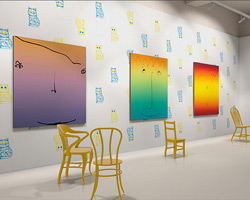 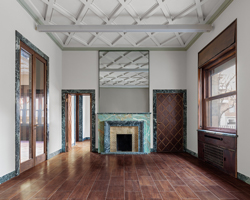 Jan 18, 2021
amber is an all-consuming art piece that highlights the dangers of plastic pollution
using just plastic bottles and scotch tape, this group of artists has created an artwork that speaks volumes.
art
359 shares
readers
connections: 22

Jan 12, 2021
tomáš libertíny sculpts beeswax version of the nefertiti bust together with 60.000 honeybees
the honeybees were invited to build their beeswax honeycombs around a 3D model of the original portrait of nefertiti.
art
+25.1K shares
connections: +1250