while the notion of ‘space tourism’ may still be light-years away, NASA’s jet propulsion laboratory is already dreaming of the future. the team asked don and ryan clark of seattle-based invisible creature to create a trio of travel posters to promote outer space’s most sought after locales. rendered in a retro-style reminiscent of 1950s album art, the bold, vibrantly colored works advocate galactic getaways to mars and enceladus, and a trip to four planets on the grand tour. like relics from the future, the posters promote ‘historic sites’, ‘architecture’ and agriculture’ alongside prismatic graphics of spaceships, shooting stars and saturn’s rings. see details on each of the posters in the artists’ own words below. 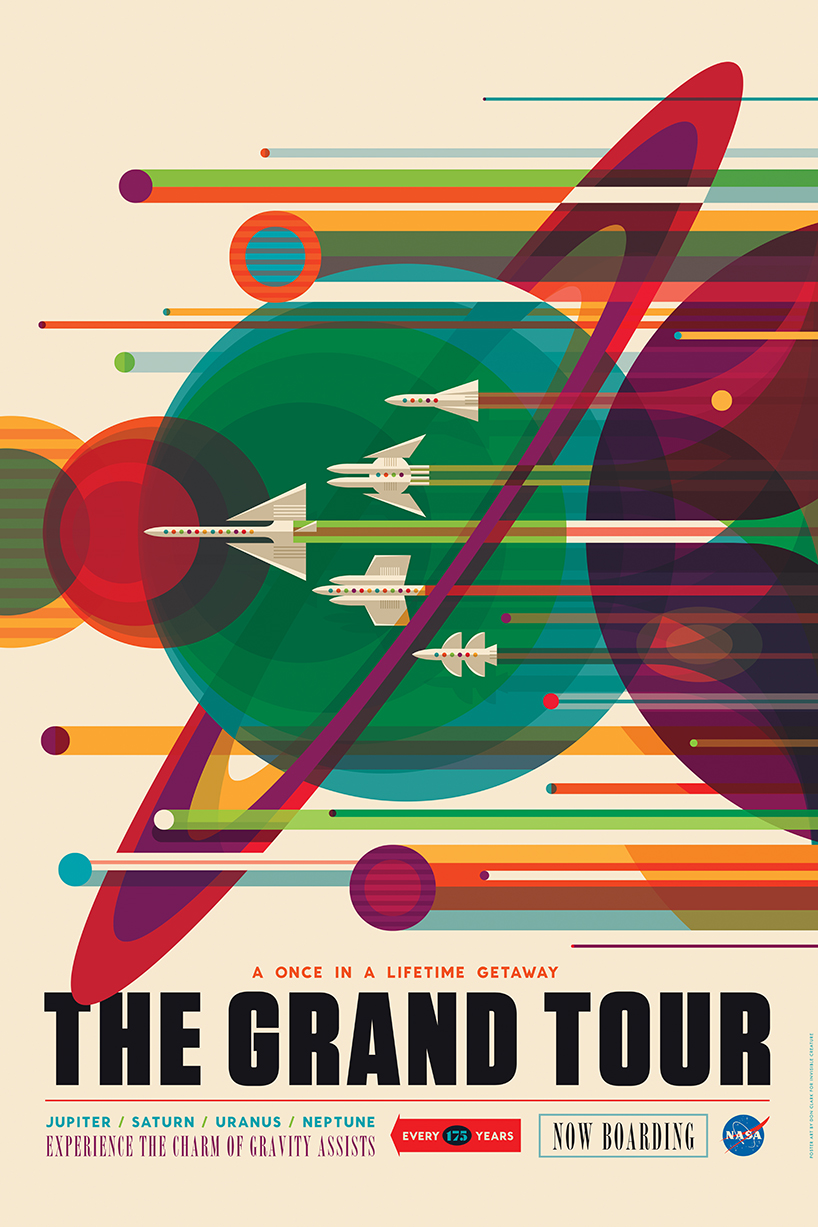 the three commissioned pieces are part of the NASA jet propulsion laboratory ‘visions of the future 2016‘ calendar – an internal gift to scientists, engineers, government and university staff. 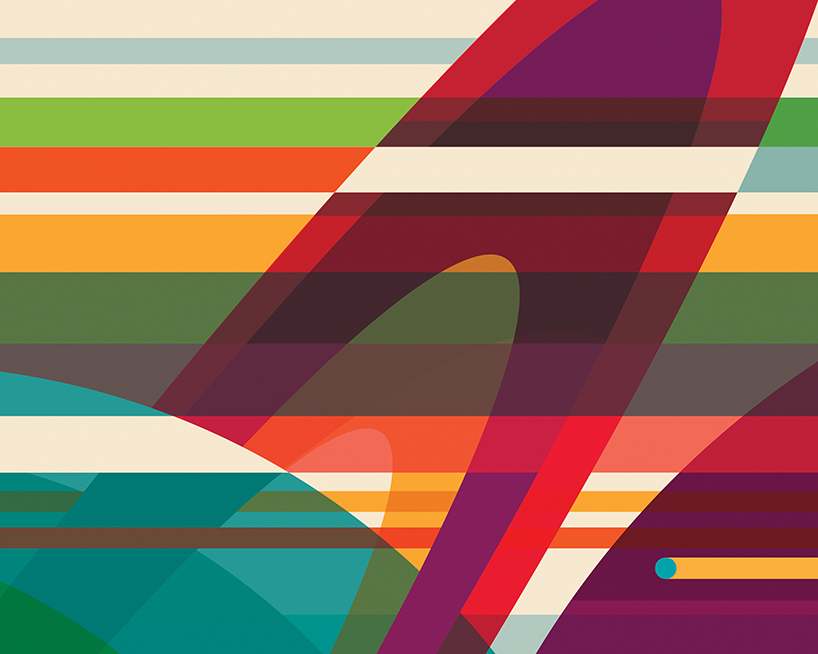 detail of saturn’s rings on the grand tour poster

the grand tour: NASA’s voyager mission took advantage of a once-every-175-year alignment of the outer planets for a grand tour of the solar system. the twin spacecraft revealed stunning details about jupiter, saturn, uranus and neptune – using each planet’s gravity to send them on to the next destination. voyager set the stage for such ambitious orbiter missions as galileo to jupiter andcassini to saturn. today both voyager spacecraft continue to return valuable science from the far reaches of our solar system. 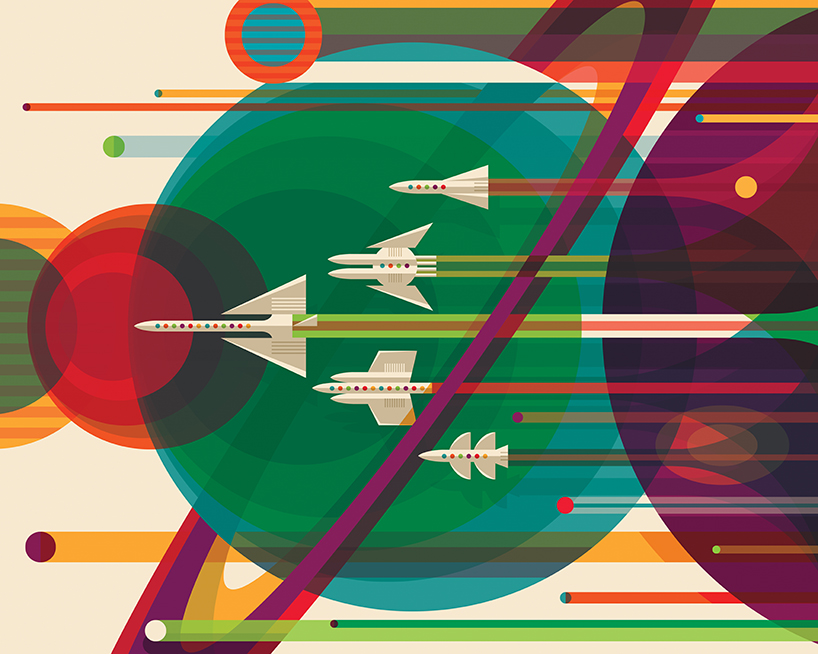 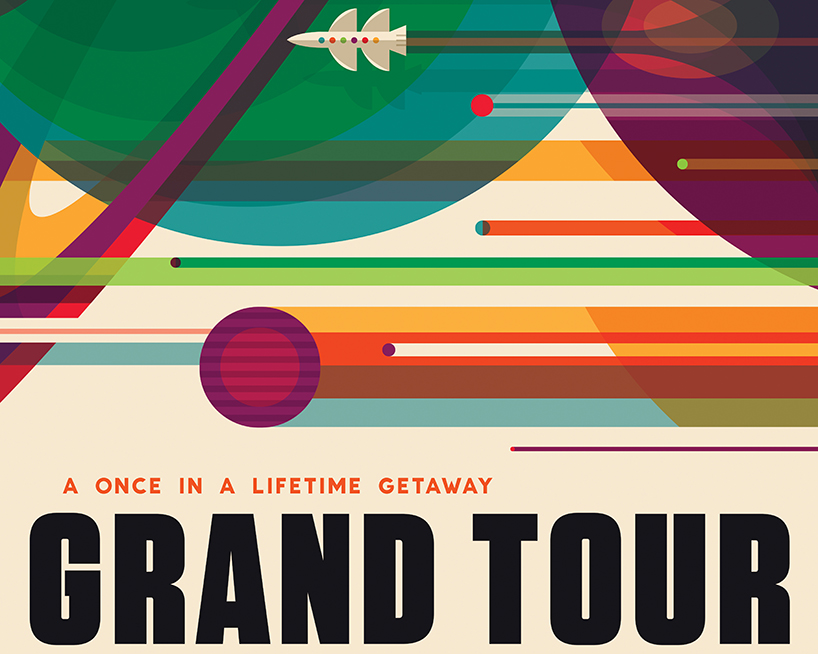 ‘a once in a lifetime getaway’ on the grand tour

mars: NASA’s mars exploration program seeks to understand whether mars was, is, or can be a habitable world. missions like mars pathfinder, mars exploration rovers, mars science laboratory and mars reconnaissance orbiter, among many others, have provided important information in understanding of the habitability of mars. this poster imagines a future day when we have achieved our vision of human exploration of mars and takes a nostalgic look back at the great imagined milestones of mars exploration that will someday be celebrated as ‘historic sites.’ 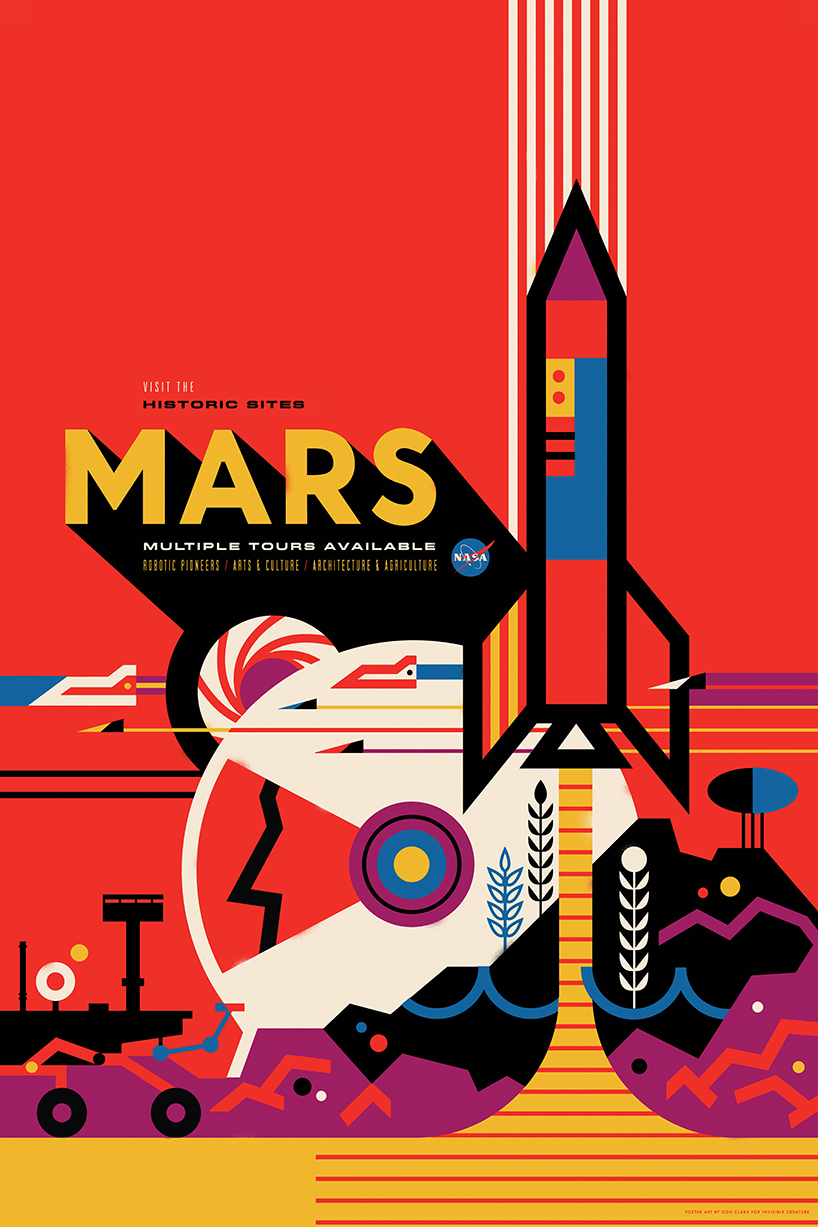 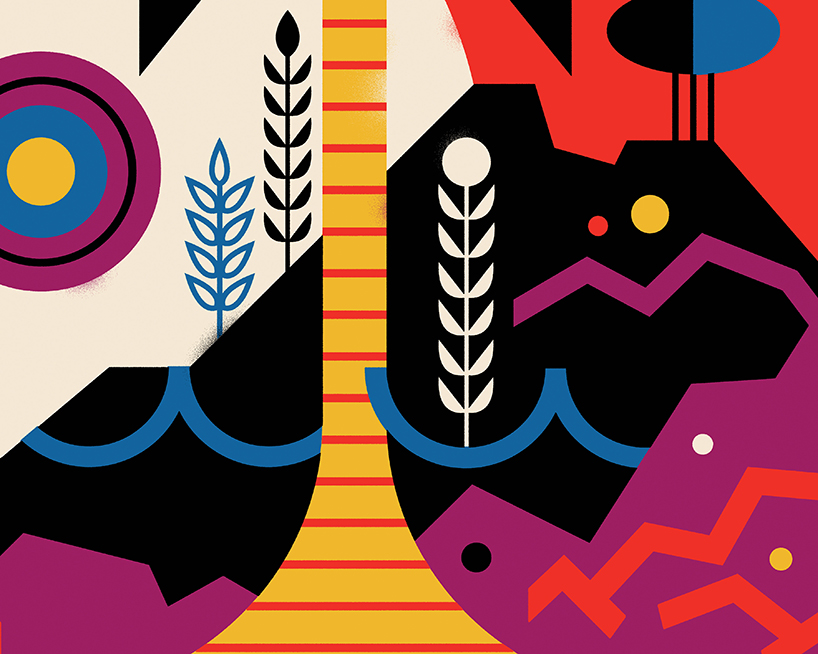 detail of agricultural elements on mars 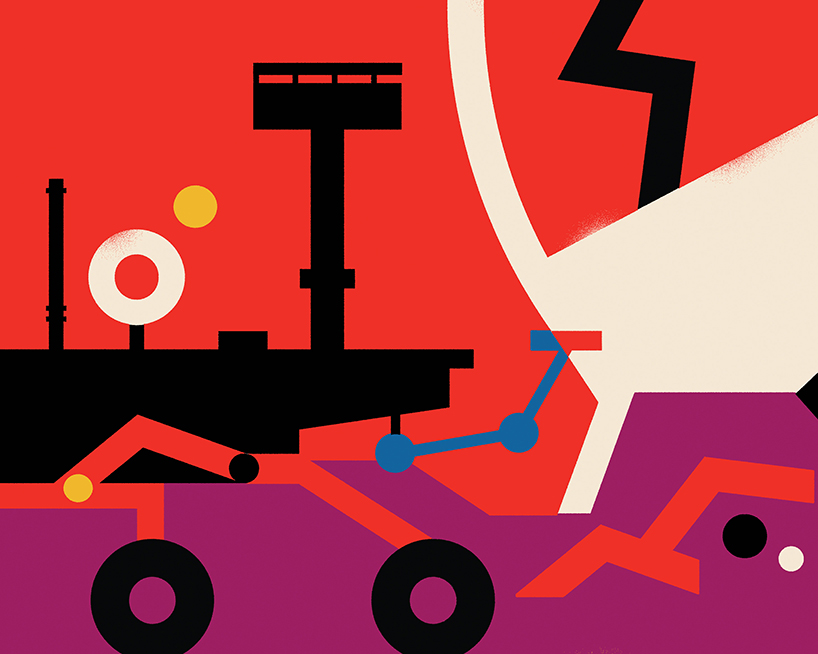 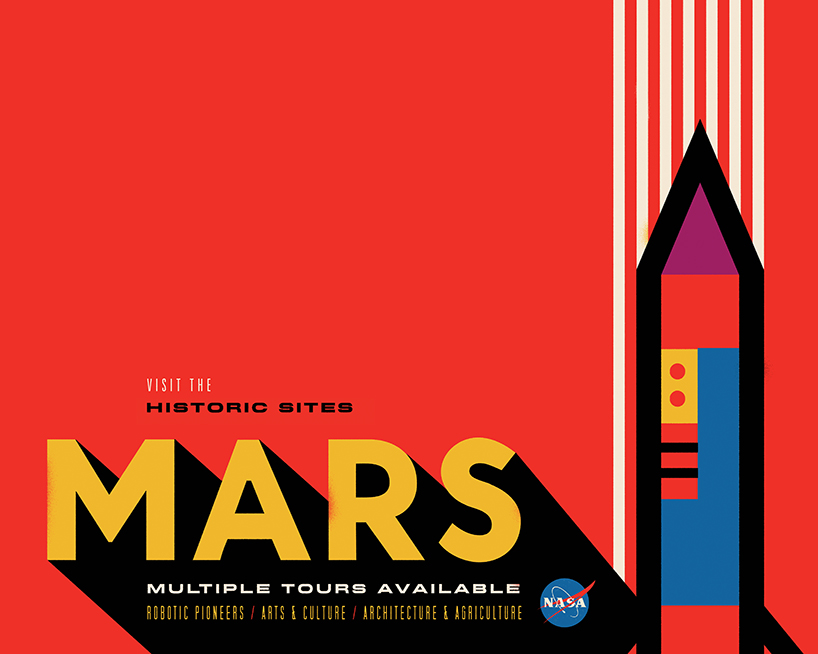 a colorful spaceship is included in the mars poster

enceladus: the discovery of enceladus’ icy jets and their role in creating saturn’s e-ring is one of the top findings of the cassini mission to saturn. further cassini mission discoveries revealed strong evidence of a global ocean and the first signs of potential hydrothermal activity beyond earth – making this tiny saturnian moon one of the leading locations in the search for possible life beyond earth. 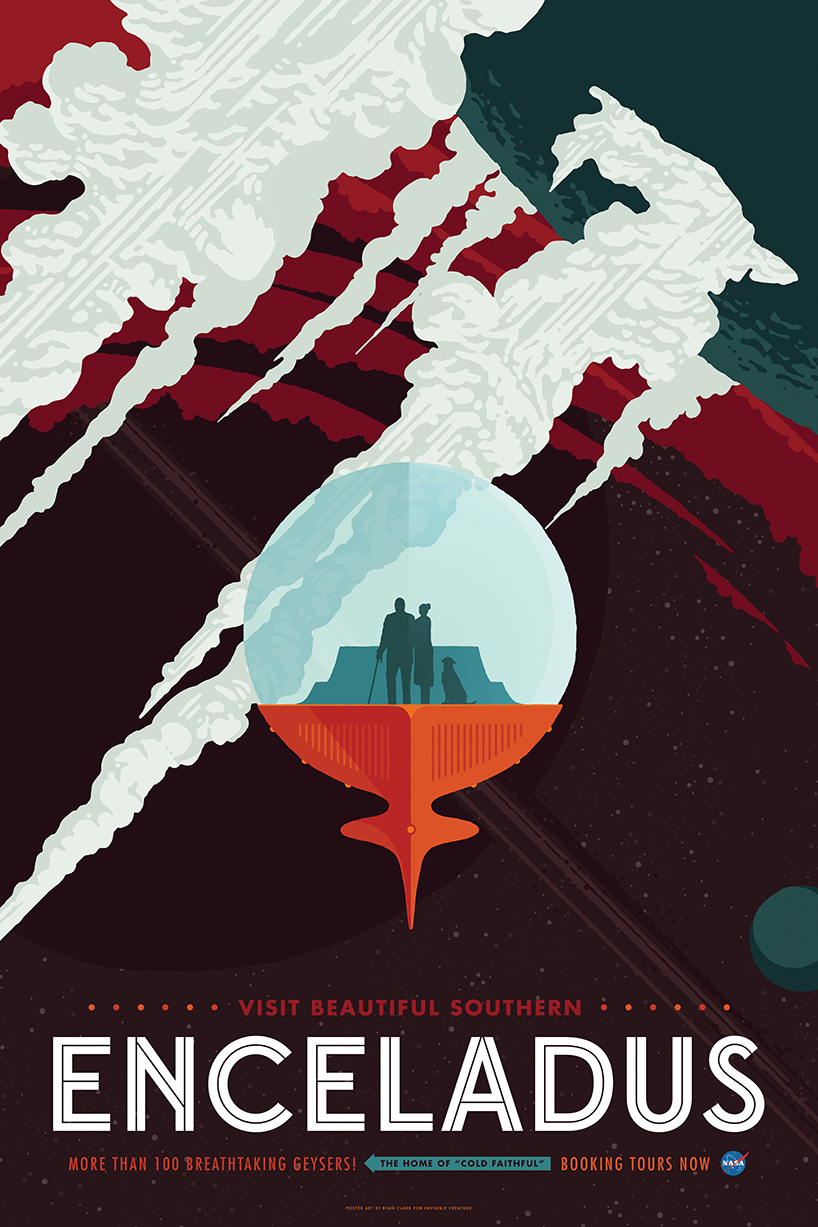 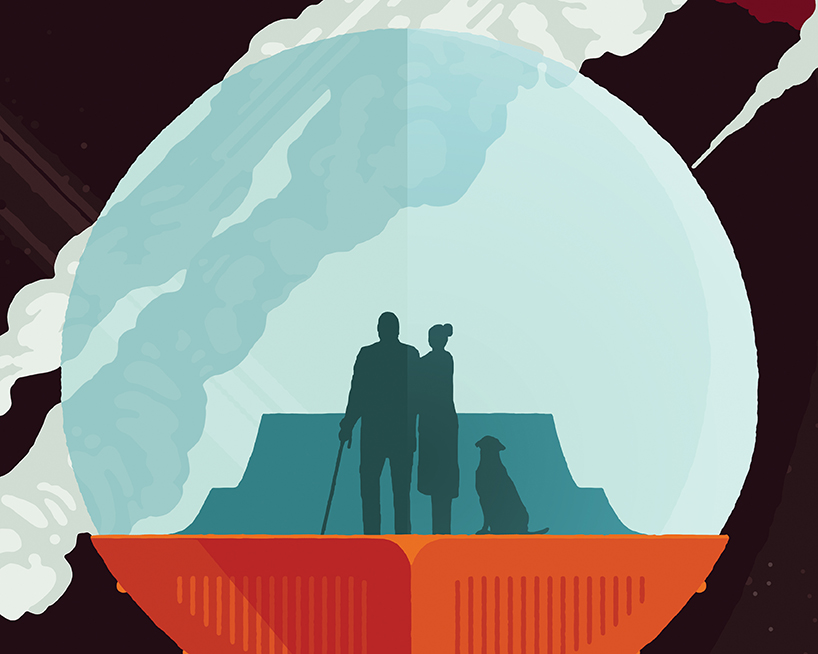 detail of two figures and a dog liviving on enceladus 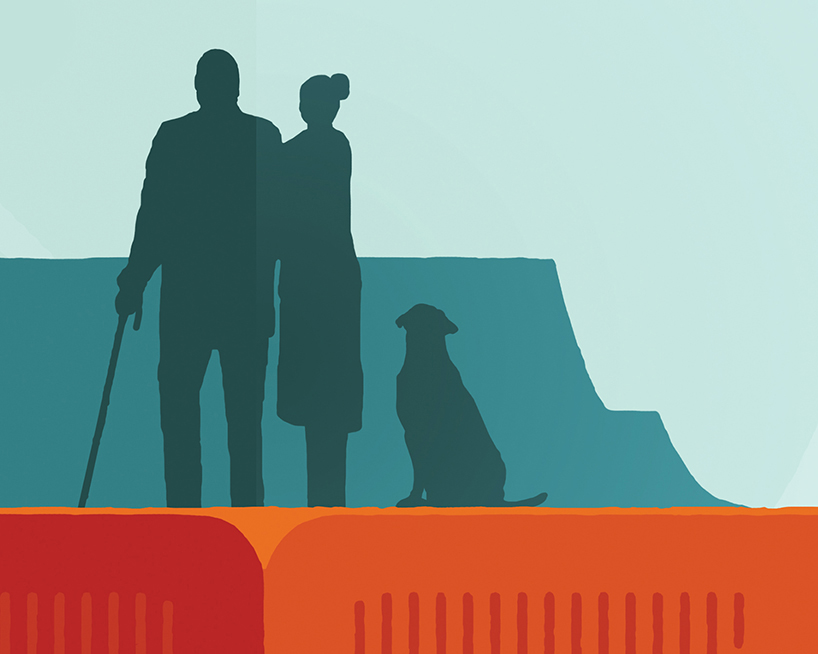 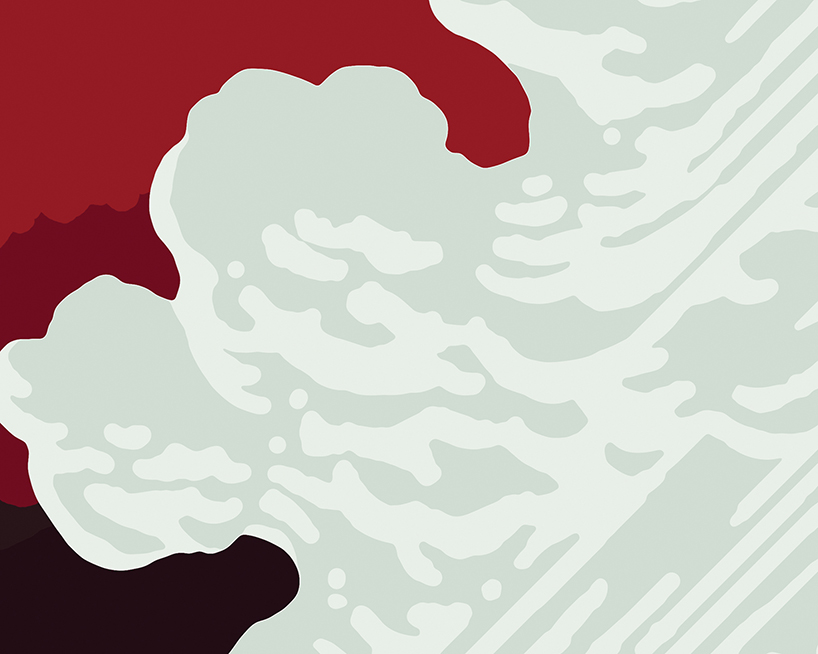 graphic detail from the enceladus poster