while many artists reference the sky as a source of creative stimulation, only a handful can claim it as a studio, material and canvas too. american artist james turrell is one of these few, and since the mid-1960s he has been experimenting with light as a medium of artistic expression, creating works that revolve more around the experiential than the tangible. he is possibly best known for his series of skyspaces — a series rooms and chambers scattered across the world that serve as dedicated windows to the vast depth of the sky above. the design and architecture of turrell’s skyspaces follow meticulous specifications, and are conceived to create an ideal setting for viewers to observe the spectacular interplay between artificial and natural light. 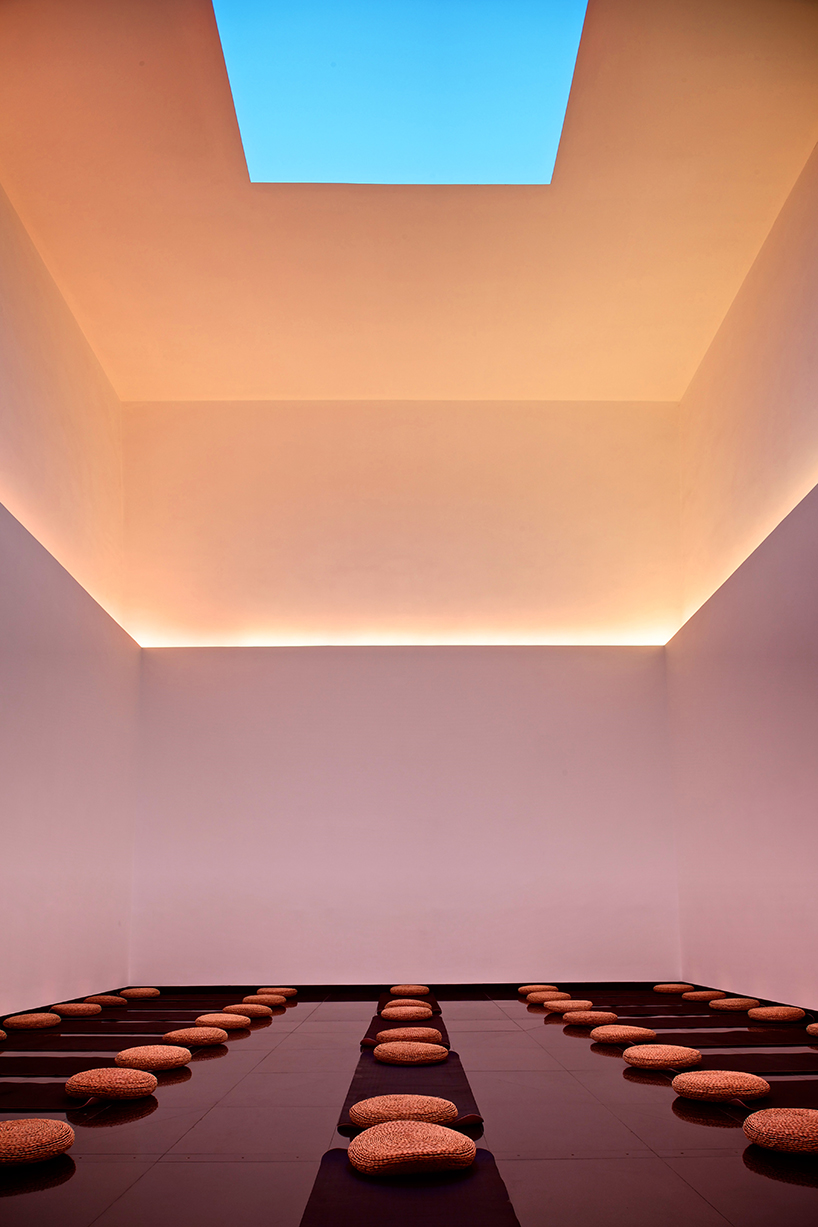 turrell has been experimenting with light as a medium of artistic expression since the mid sixties
image by ben mcmillan, courtesy of the artist

a james turrell skyspace reconfigures its visitors’ perception of the world around them, and more specifically, their relationship to the infinite space that floats over their heads. the almost inconceivably immense journey of light from the sun to the human eye is the phenomenon by which each of turrell’s spaces is realized, and on which they are dependent. in each location, simply outfitted rooms become viewing galleries to the heavens, the slow gradations of light within mirroring the celestial cycles viewed through an opening in the ceiling. the sky — something normally beyond human reach — is brought down to our level.

particularly arresting during the hours of twilight or during a star filled night, skyspaces become a stage on which the entire spectrum of human vision is put on show. ‘my work has no object, no image and no focus,’ explains turrell, ‘with no object, no image and no focus, what are you looking at? you are looking at you looking. what is important to me is to create an experience of wordless thought.’ 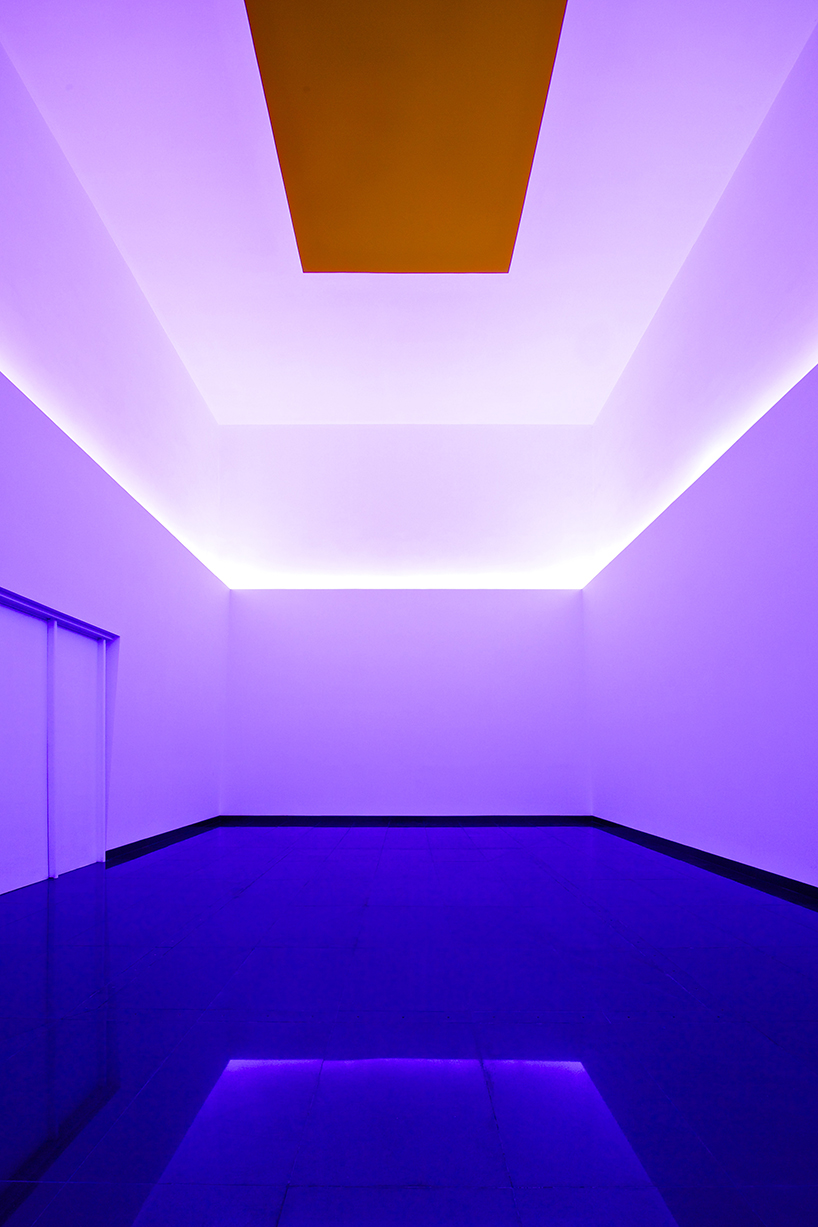 in each location, simply outfitted rooms become viewing galleries to the heavens
image by ben mcmillan, courtesy of the artist

one of the most stirring of turrell’s skyspaces is located at temple — a restaurant, museum, and hotel in beijing, china, which designboom recently visited. steps away from the forbidden city and jingshan park, the site itself is a vast, centuries-old buddhist complex, which has been recently transformed into a 3,500 square meter cultural venue (take a virtual tour here). the major restoration of the location was initiated by belgian entrepreneur juan van wassenhove — a longtime collector, and patron of the arts. alongside former film producers li chow and lin fan, van wassenhove founded temple, a compound which now includes a fine-dining restaurant, a hotel, and an art museum. an ongoing program of regular exhibitions spotlights the work of both chinese and international creatives, with a particular focus on light works. 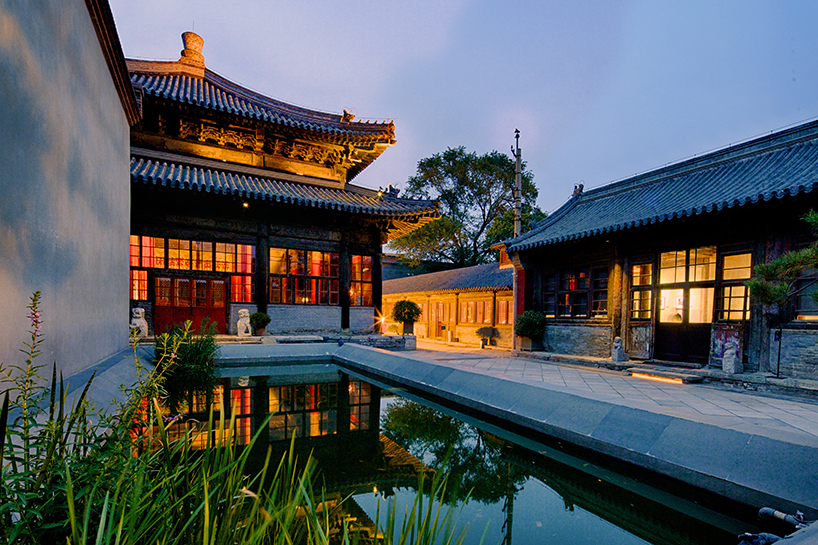 ‘gathered sky’ is located just a stone’s throw from beijing’s forbidden city
image by ben mcmillan, courtesy of the artist

after two years of work on the project, and five years following its public opening, the experience of turrell’s skyspace at temple is no less breathtaking. specifically designed for sunset viewings and only open four days a week, ‘gathered sky’ invites visitors to lie on mats and pillows and look upward towards a rectangular aperture in the ceiling that frames the beijing sky as it readies to set. while eclectic music plays in the background, viewers can contemplate, meditate, and consider their surroundings for more than one hour, as the color of the scene naturally evolves overhead. turrell has programmed a sequence of continuously-changing LED lights, fine-tuned to complement the ever-changing hues of the sky. by the time the music finishes — acting not only an imagination-enhancer, but an indicator of the installation’s conclusion — night has fallen, and the sky is pitch black.

‘my desire is to set up a situation to which I take you and let you see’, turrell explains, ‘it becomes your experience’. 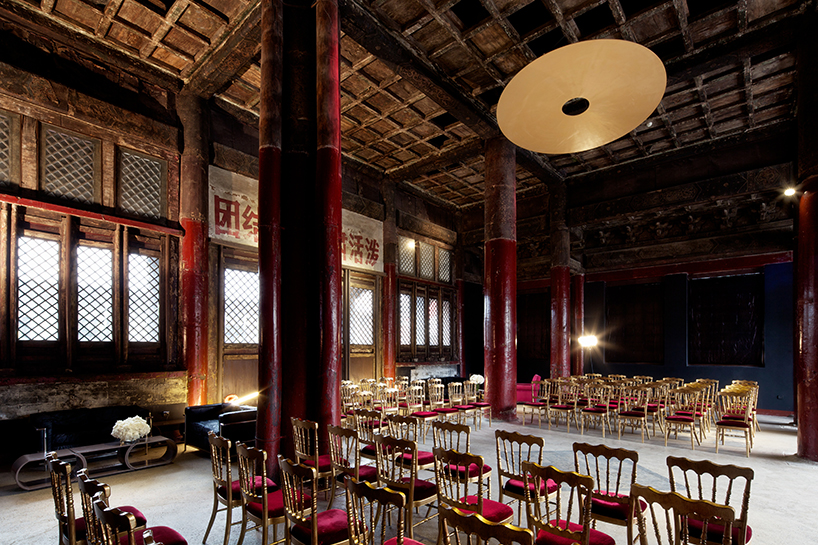 the location is a centuries old buddhist temple
image by ben mcmillan, courtesy of the artist

about temple restaurant and museum:

the temple restaurant, museum, and hotel is a 3,500 square meter cultural venue set in a 600-year-old complex in the heart of beijing. the historic site includes ancient halls of worship, the former living quarters of prominent buddhist figures, and civilian buildings constructed after the founding of the people’s republic of china. architectural and design firm HASSEL was involved in the design of the interior of the restaurant, while the restoration of all the buildings in the complex — including the qing dynasty protected buildings — was curated by temple’s founders under the supervision of local cultural heritage protection authorities. both qing dynasty and contemporary houses built in the 1960s have become stylish event spaces and conference rooms for the hotel. an art gallery, with an ongoing program of regular exhibitions, spotlights the work of both chinese and international artists. temple’s private collection of contemporary art pieces is furthermore featured in private rooms and throughout its gardens. also on site is ‘gathered sky’, the first and only installation by artist james turrell in china, which can be viewed by the public four days a week at sunset.