in 2005, james turrell completed the skyspace ‘piz uter’ in zuoz, a swiss village in the upper engadin. embedded into the mountainside, the skyspace appears externally as an archaic-looking cylinder built from dry stone masonry. the project is defined by its two openings: the entrance, which is strategically directed towards the valley; and the overhead oculus that presents uninterrupted views of the sky.

on saturday january 30, 2021, the 11th edition of the renowned engadin art talks (E.A.T.) — the forum for art, architecture, design, film, science, and literature — took place, with designboom a media partner. as part of the event, swiss percussionist and composer fritz hauser performed a drum piece inside james turrell’s skyspace ‘piz uter’. watch hauser’s performance, as well as a discussion with E.A.T. curator bice curiger, in the video above, and read more about the turrell-designed skyspace below.

in 2005, the client behind the project — the walter a. bechtler foundation — tapped zurich-based firm OAP architektur & projekte to work with james turrell to realize the skyspace ‘piz uter’. OAP worked closely with the artist to draw up the technical drawings and planning documents. the team also worked with lighting and illumination specialists familiar with turrell’s work. ‘although the ‘skyspaces’ represent a series of similar artworks in the artist’s oeuvre, each of them is unique — marked by its geometric shape and especially the individual geographic location,’ OAP explains. 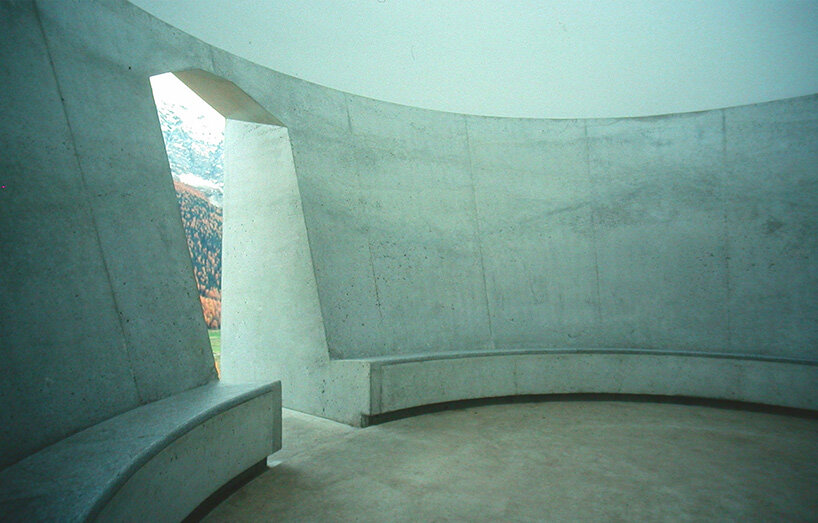 image courtesy of OAP and walter a. bechtler-stiftung

embedded into the terrain almost 2,000 meters (6,560 feet) above sea level, the autonomous structure is clad with stone masonry. internally, the cylindrical building consists of only one room with two openings: the entrance and the overhead oculus. a concrete bench encircles the room, with an incline that naturally directs views towards the opening above.

like turrell’s other skyspaces, the aperture in the ceiling is constructed in such a way that occupants cannot perceive the thickness of the roof plane. this gesture creates a two-dimensional effect with the sky appearing as a flat painting. at dusk, integrated lighting allows this ‘2D’ image to expand across the entire space in ever-changing color combinations.

image courtesy of OAP and walter a. bechtler-stiftung

other james turrell-designed skyspaces featured on designboom include a lightroom within the arlberg mountains of western austria, and another at a restaurant, museum, and hotel in beijing. see all work by the acclaimed american artist on our dedicated page here. 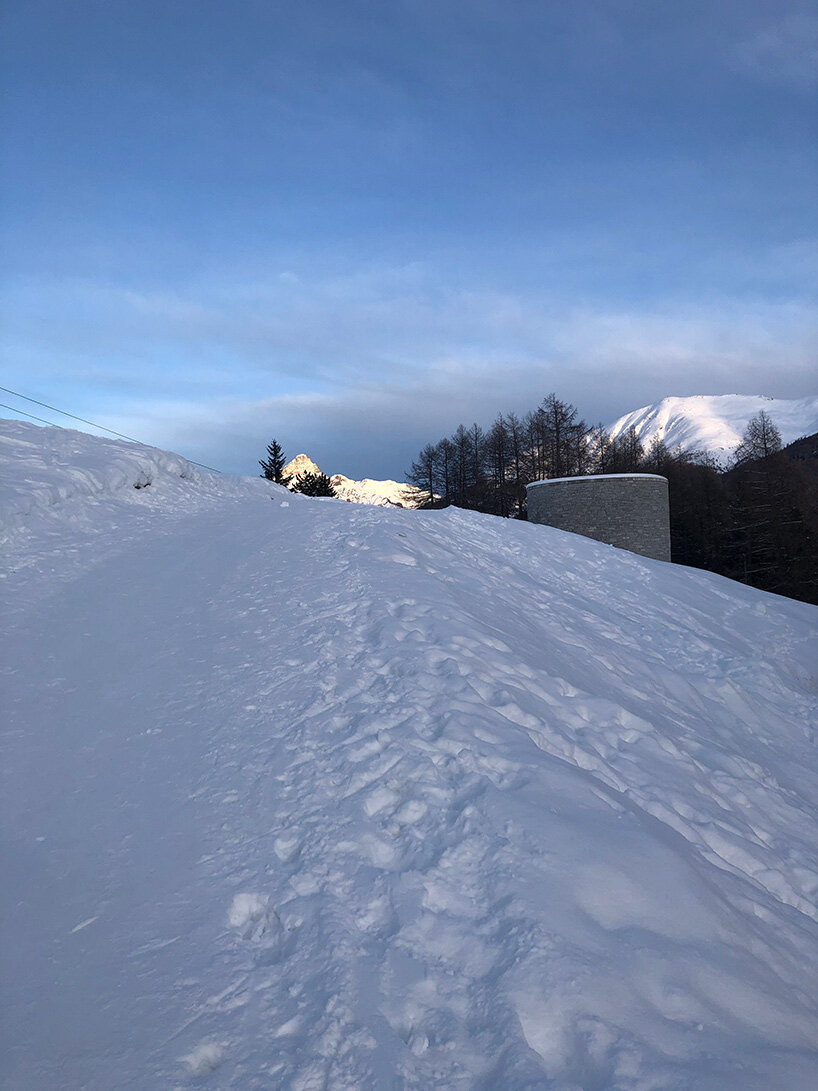 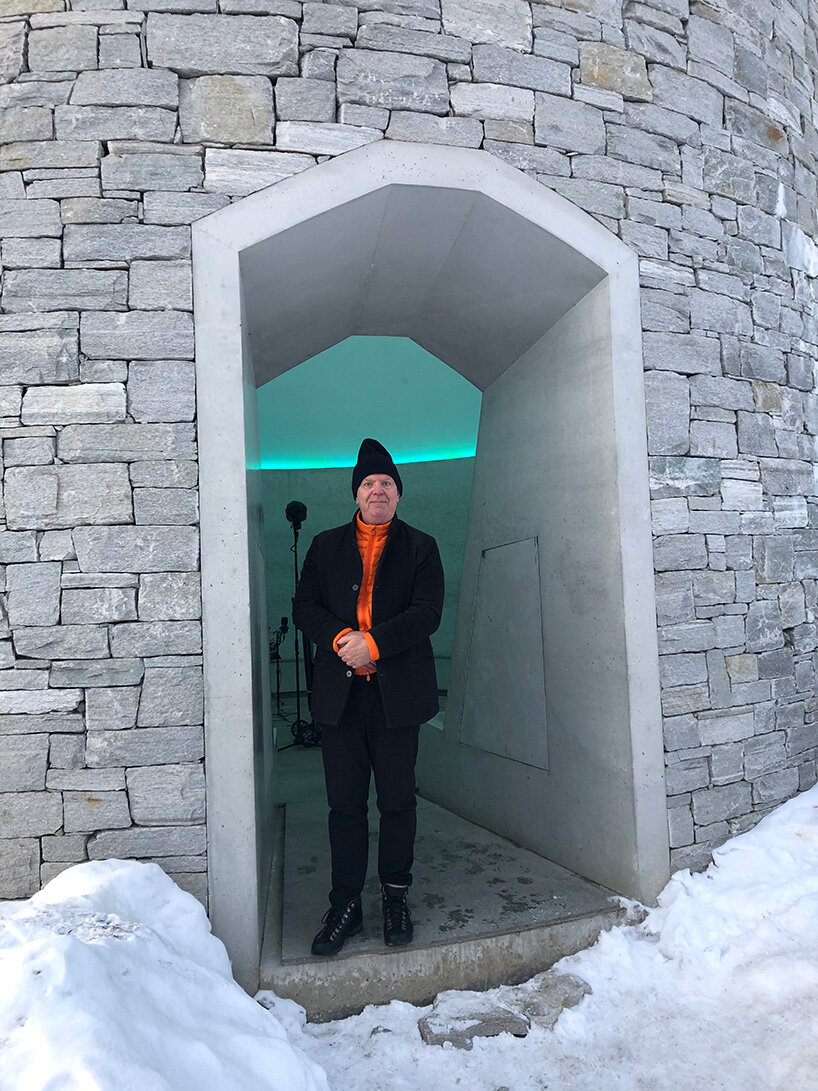 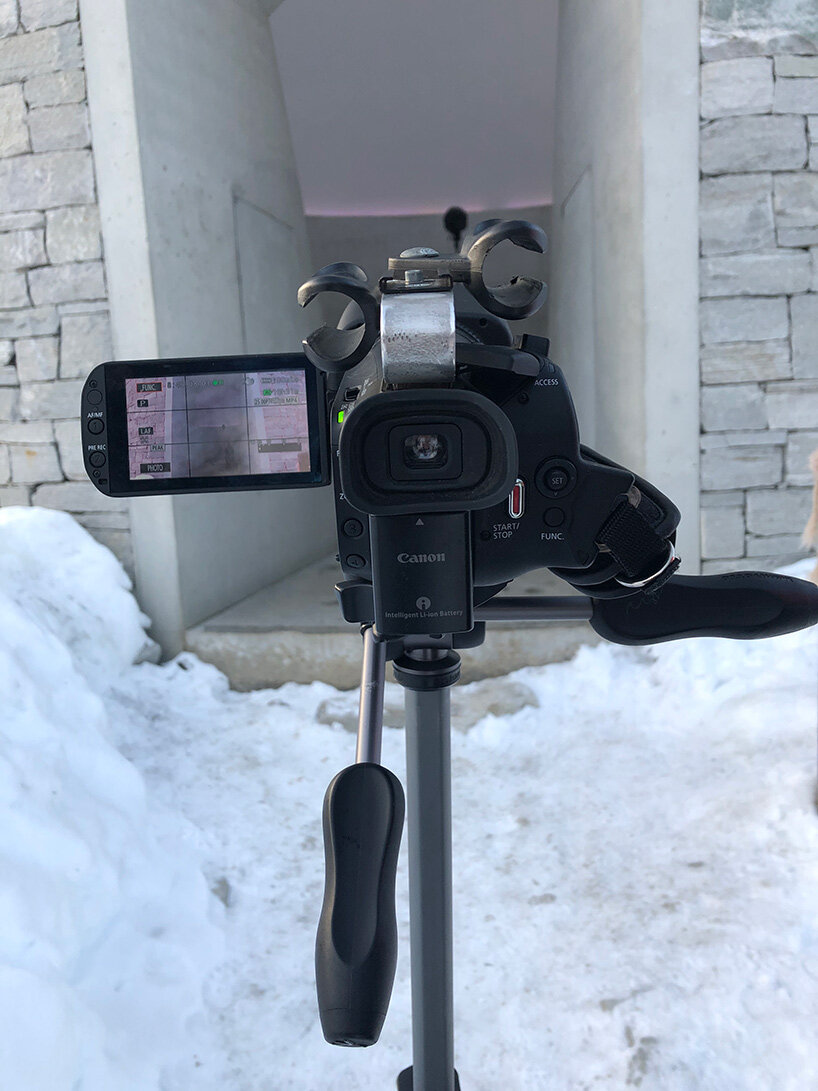 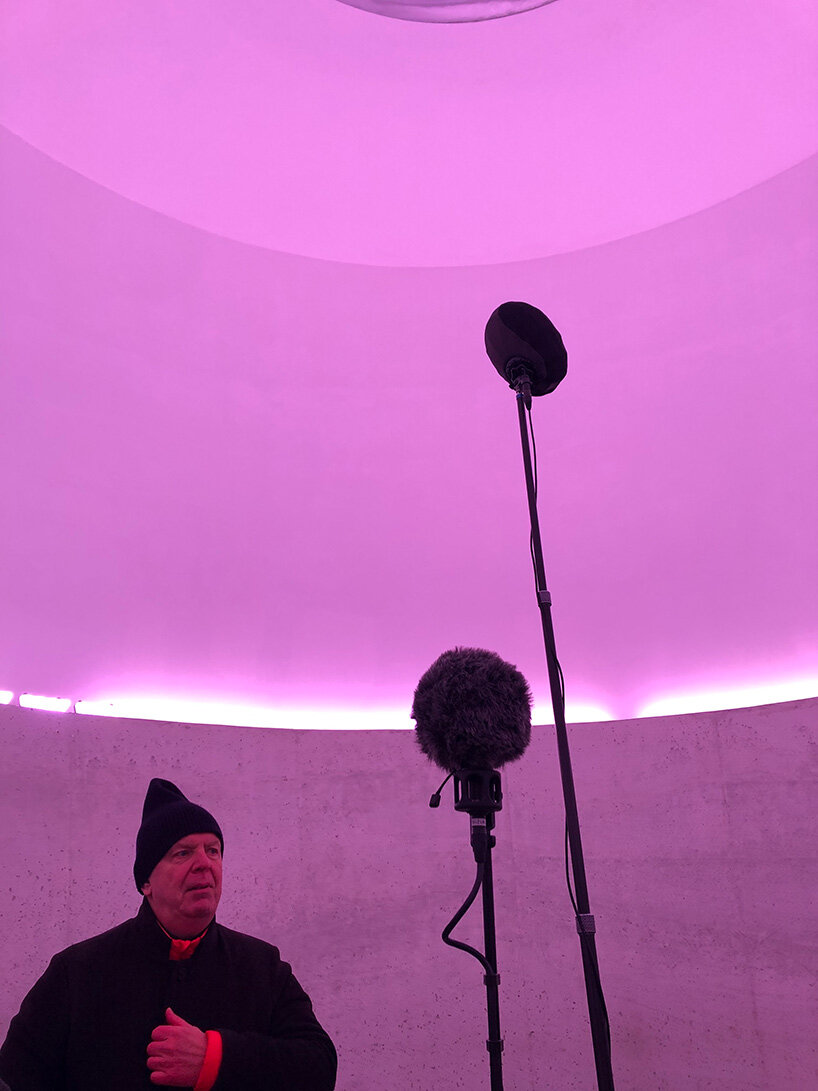 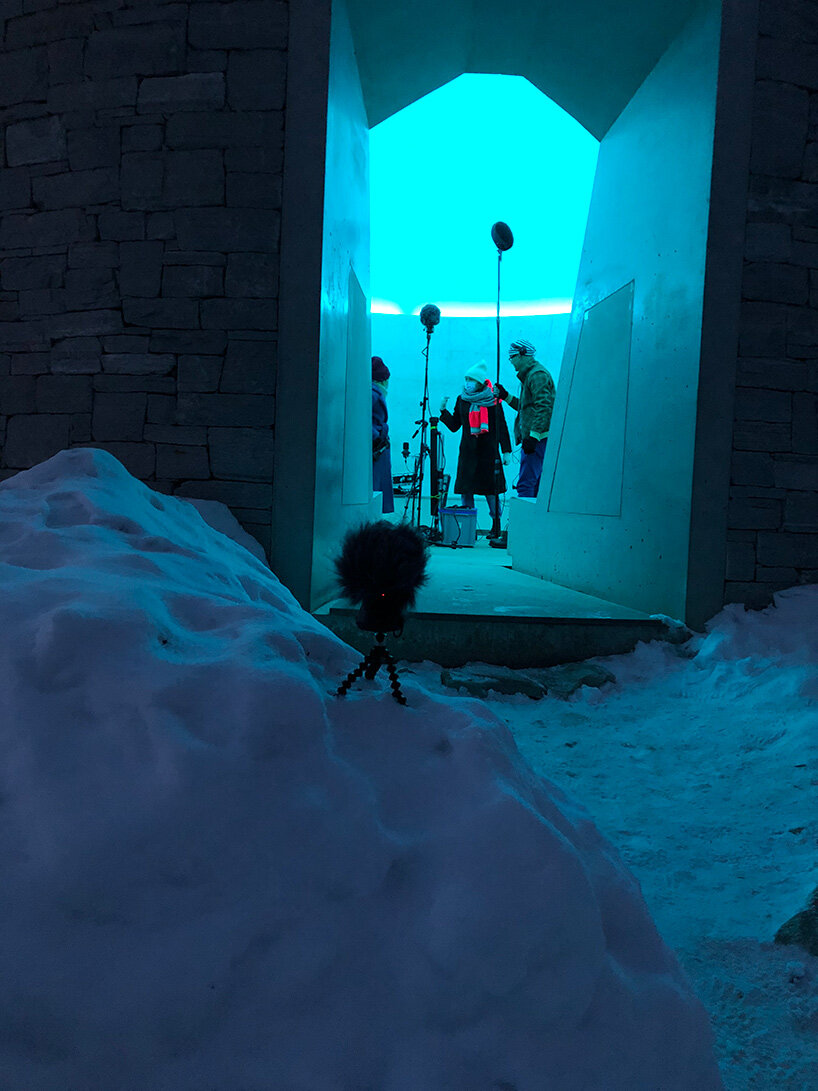 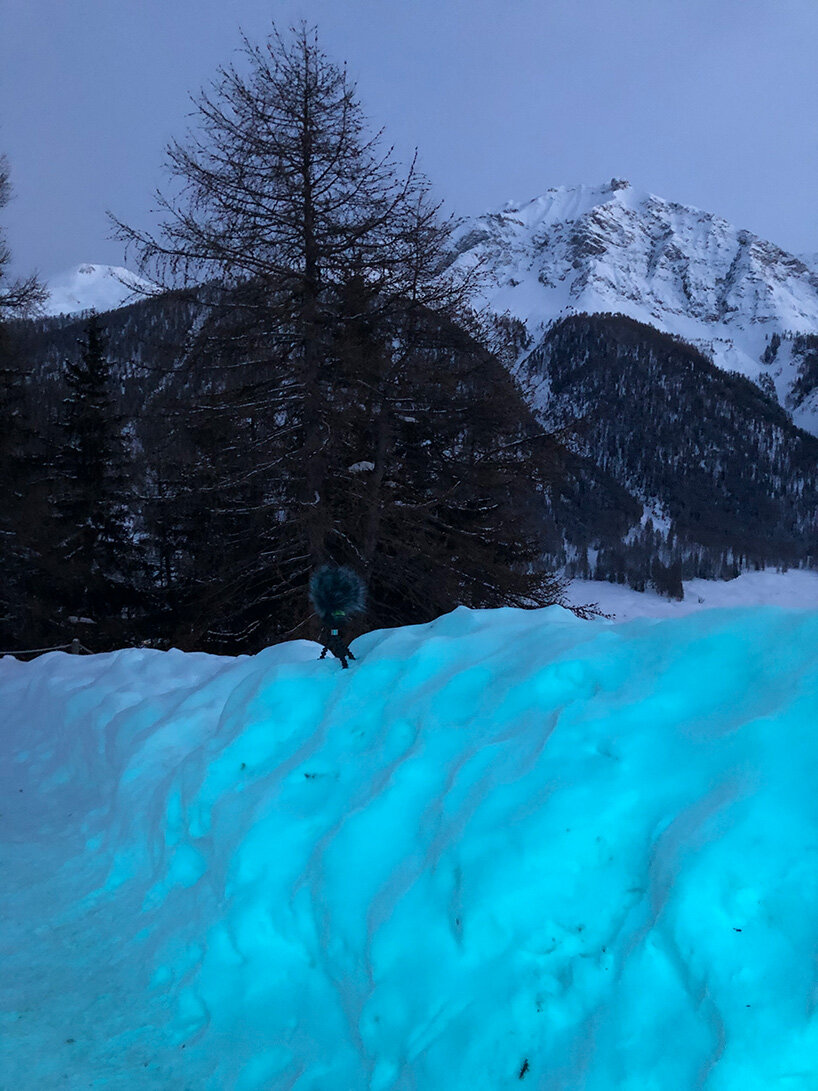 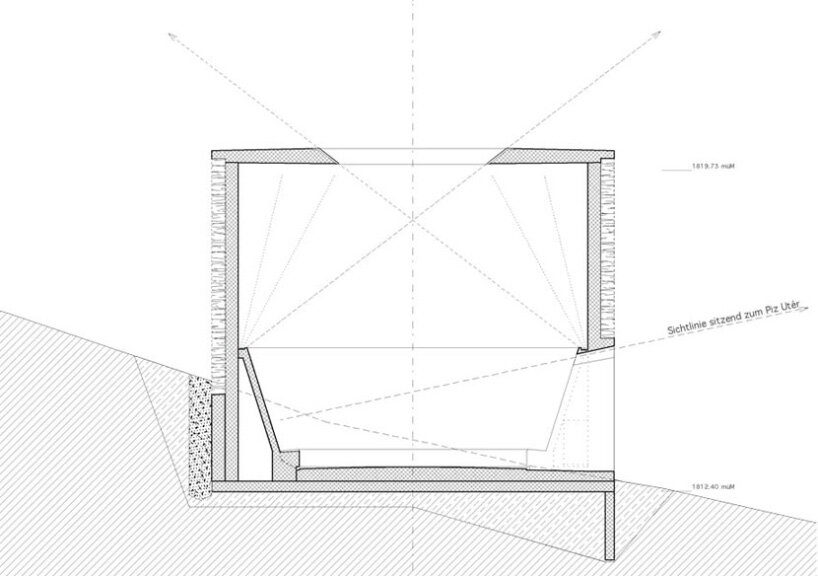 section | image courtesy of OAP and walter a. bechtler-stiftung