the stedelijk museum in amsterdam presents ‘machine spectacle’ – a monumental retrospective of swiss artist jean tinguely’s oeuvre. tinguely has become best known for his experimental kinetic machines and explosive performances that reject the static, conventional art scene. with an emphasis on play and experimentation, the swiss artist explored his fascination for destruction and ephemerality with his do-it-yourself drawing machines, dynamic sculptural works and self-destructive performances. for tinguely, art was not about standing in a sterile white space, but rather a way to animate the boundary between art and life. 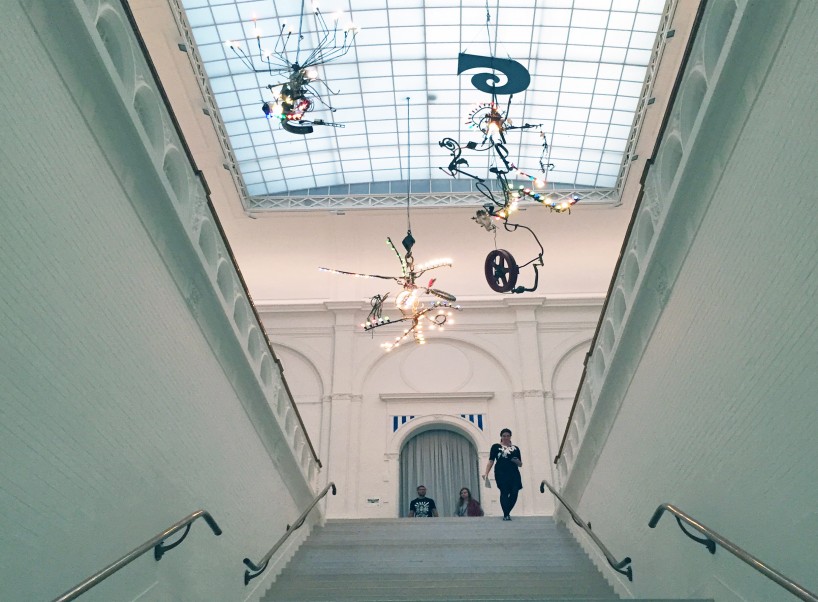 precisely 25 years after his death, the stedelijk museum has opened ‘machine spectacle’ — the largest tinguely retrospective in a dutch museum and the most comprehensive internationally in 30 years. on view from now through march 5, 2017, over a hundred machine sculptures, most of which are in working order, are paired with films, photos, drawings, and archive materials, taking viewers on a chronological and thematic journey of tinguely’s artistic development and ideas. 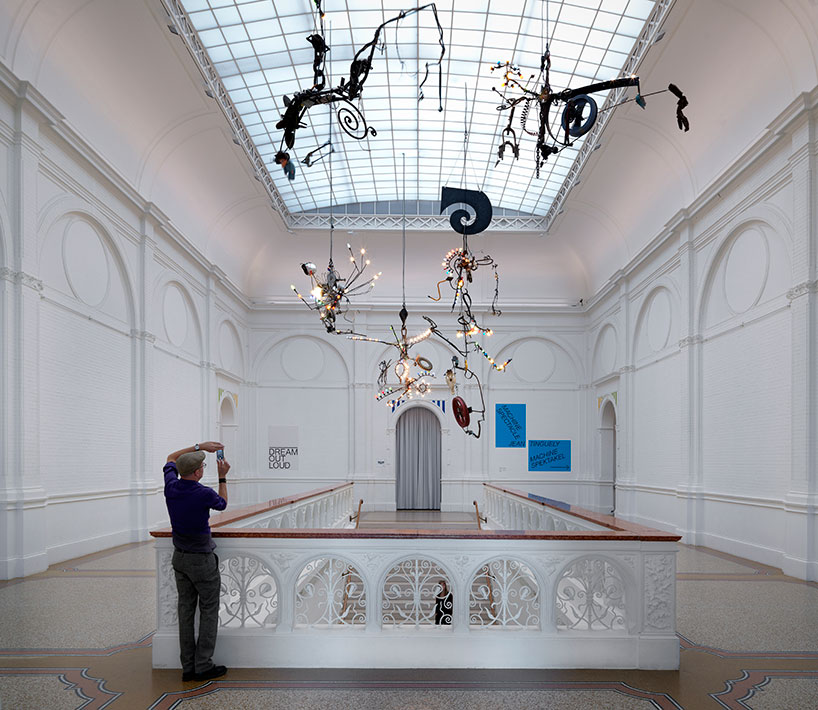 the presentation features tinguely’s early wire sculptures and reliefs, which include imitated, animated versions of abstract paintings by malevich, miró, and klee. these interactive drawing machines and wild dancing installations were constructed from a mix of mediums, including salvaged metal, waste materials, and discarded clothing. tinguely’s ‘méta-matics’ are provocative: as automated versions of american abstract expressionism, they play ironically with the dominant artistic forms of the 1950s. the subjective, intuitive creative process is no longer driven by ‘the unconscious’, but instead by an electric motor. the ‘autonomous’ automatic drawings of the ‘méta-matics’, however, are more than a mere reaction to contemporary art movements: tinguely also articulates a criticism of technological advances and human dependency on machines. 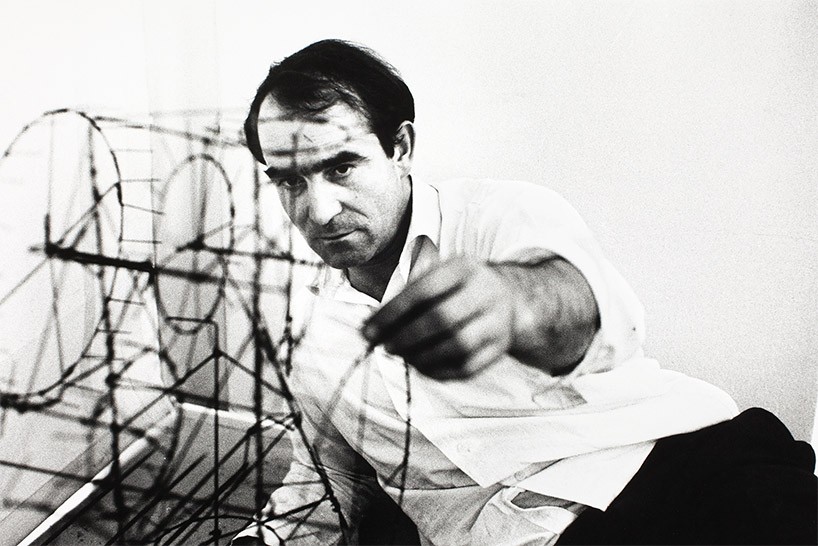 tinguely’s self-destructive performances are a special feature of the retrospective, particularly the enormous installations created between 1960–1970 designed to spectacularly disintegrate in a barrage of sound.

on the evening of march 17, 1960, a new york audience in the sculpture garden of MoMA witnessed a staggering spectacle: whirling and cacophonous, the machine produced drawings, played the piano (with the help of a complex system of cogs and wheels), spewed out fire, smoke, and noise, and — after half an hour — completely dematerialized. this action marked a turning point in tinguely’s career, not only for his use of materials — like water, light, and smoke — but also because he elevated the theme of destruction to an aesthetic principle in his art. 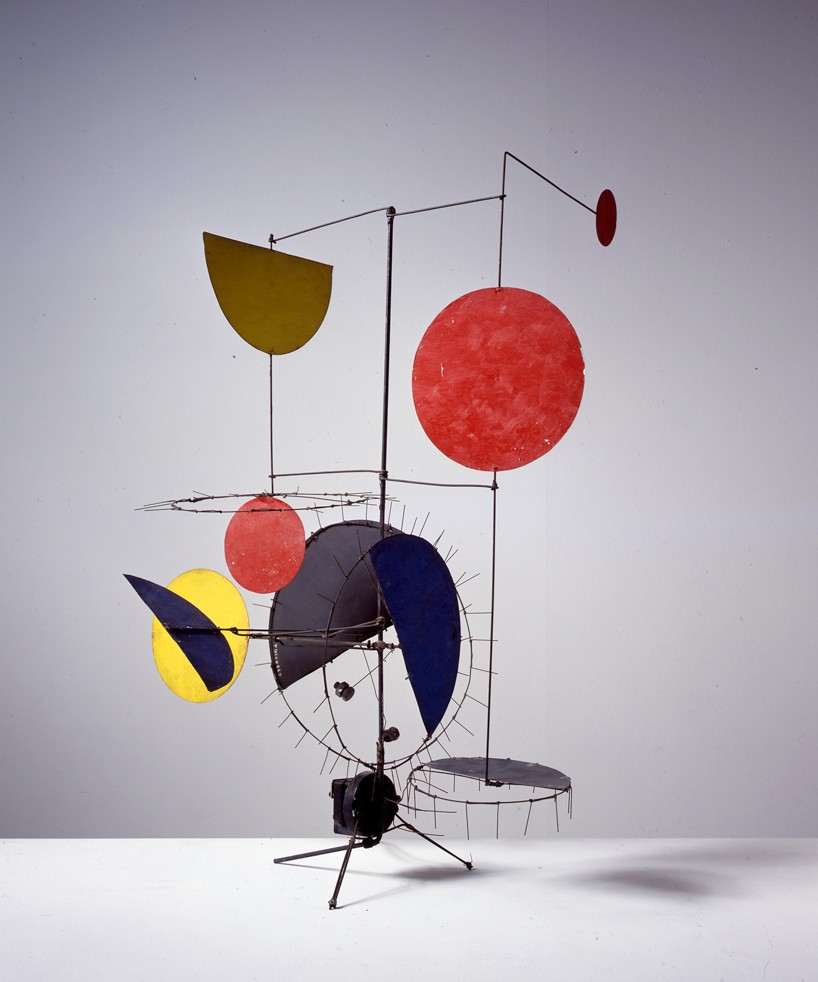 the retrospective culminates with the dramatic room-filling installation, ‘mengele-totentanz’ — a 1986 work realized after tinguely witnessed a devastating fire. featuring a disturbing display of light and shadow, the installation incorporates reclaimed objects from the ashes, such as scorched beams, agricultural machinery (made by the mengele company), and animal skeletons. the final piece acts as an oversized ‘memento mori’, yet also serves to invoke the nazi concentration camps, with spasmodic movements and piercing sounds evoking a haunting mood. 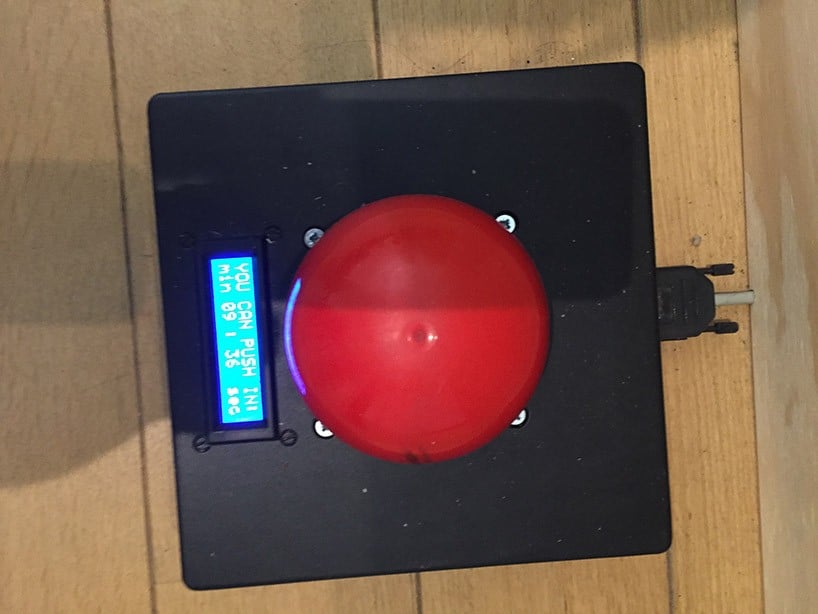 with his do-it-yourself drawing machines, tinguely critiqued the role of the artist and the elitist position of art in society. he renounced the unicity of ‘the artist’s hand’ by encouraging visitors to produce work themselves.

‘I painted and painted and painted […] I never managed to finish a picture,’ tinguely said back in 1976. ‘it was like I was paralyzed and I hit a total dead end. I just couldn’t see the end and didn’t know when I was meant to stop painting […] so I started working with movement. movement offered me a way out of this paralysis, offered an endpoint. movement allowed me to say, ‘OK, now it’s done”.

collaboration was integral to tinguely’s career. he worked extensively with artists like daniel spoerri, niki de saint phalle (also his wife), yves klein, and others from the zero network, as well as museum directors pontus hultén, willem sandberg, and paul wember. thanks to his charismatic, vibrant personality and the dazzling success with which he presented his work (and himself) in the public sphere, tinguely was a vital figure within these networks, acting as leader, motivator, and connector. 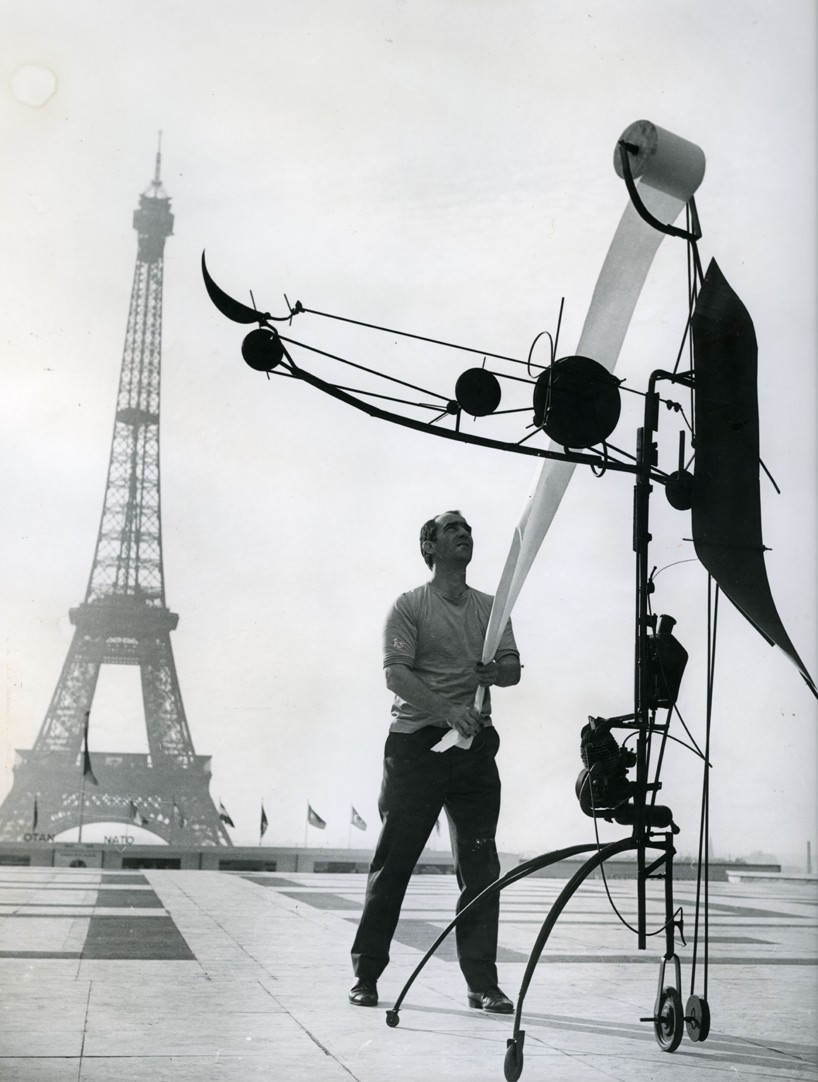 jean tinguely with méta-matic no. 17 in front of the eiffel tower, 1959
image by john r. van rolleghem, c/o pictoright amsterdam, 2016

in a separate room, a very loud happening is the wild dancing installation constructed from salvaged metal, waste materials, and discarded clothing: the ballet of the poor (ballet des pauvres). 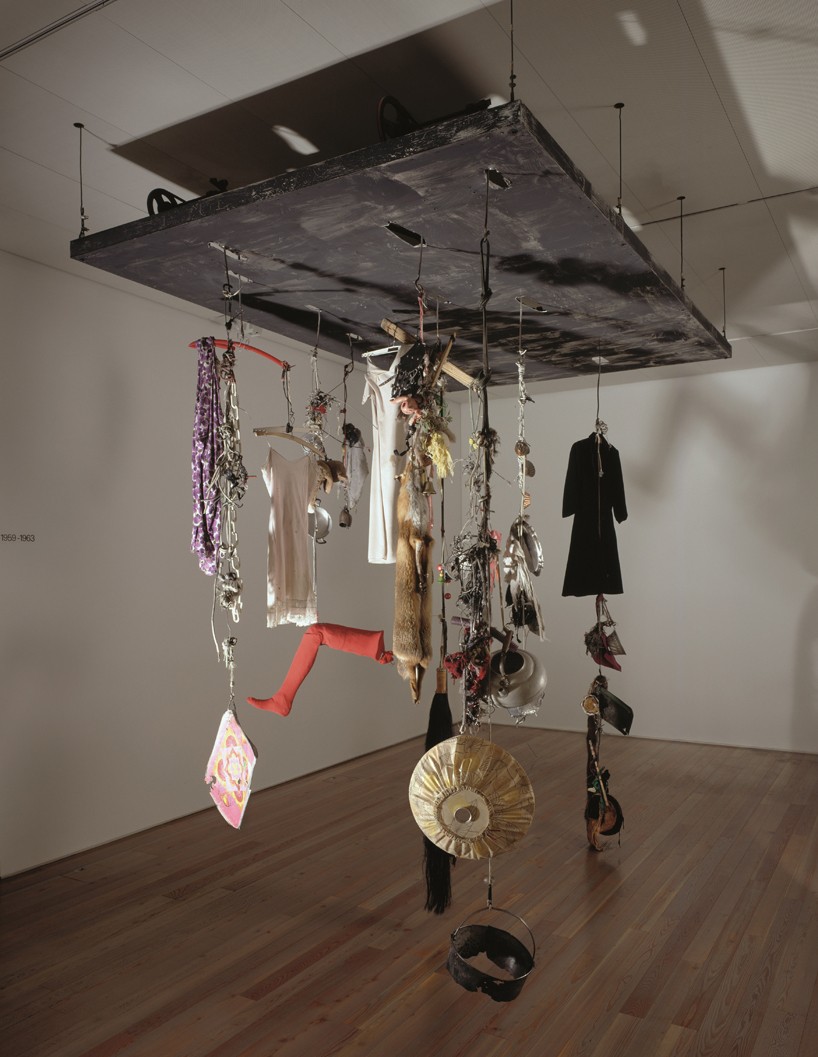 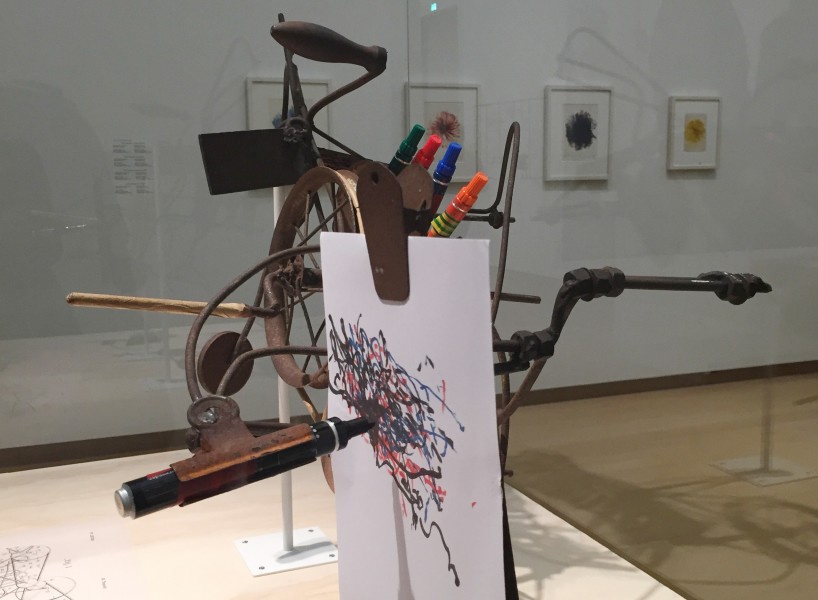 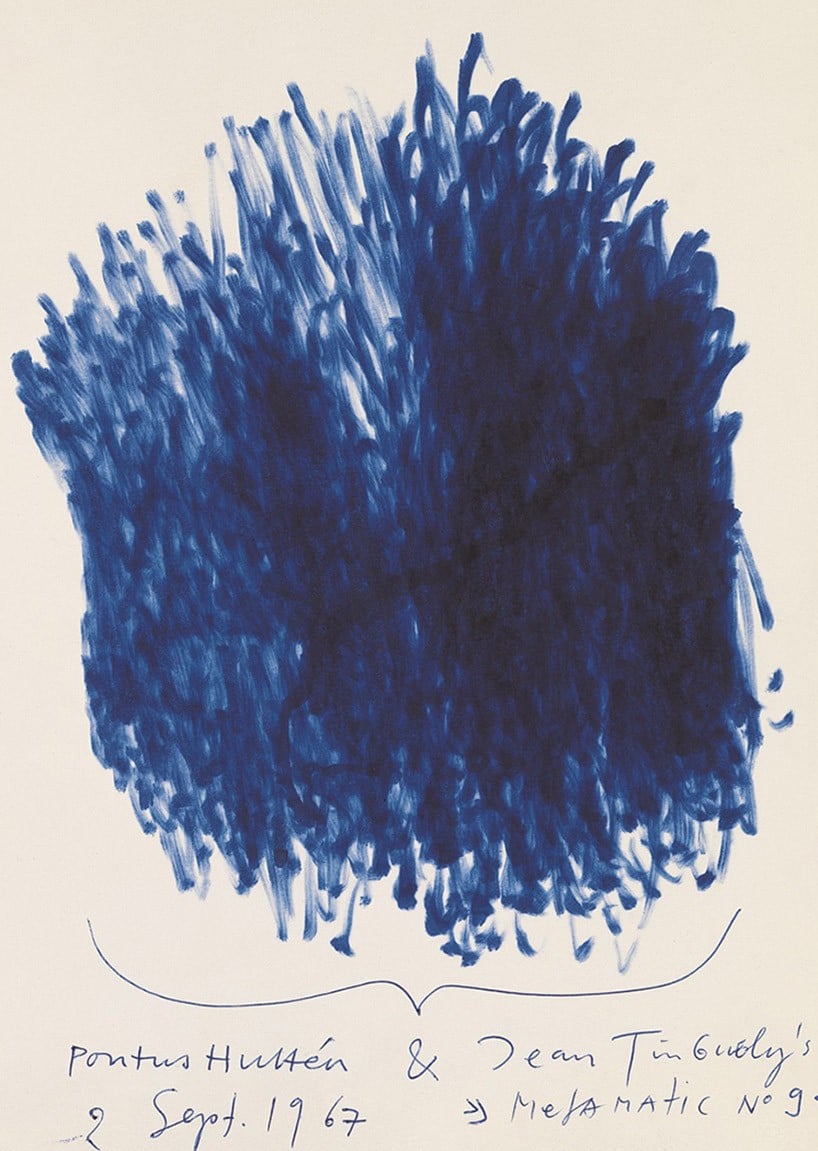 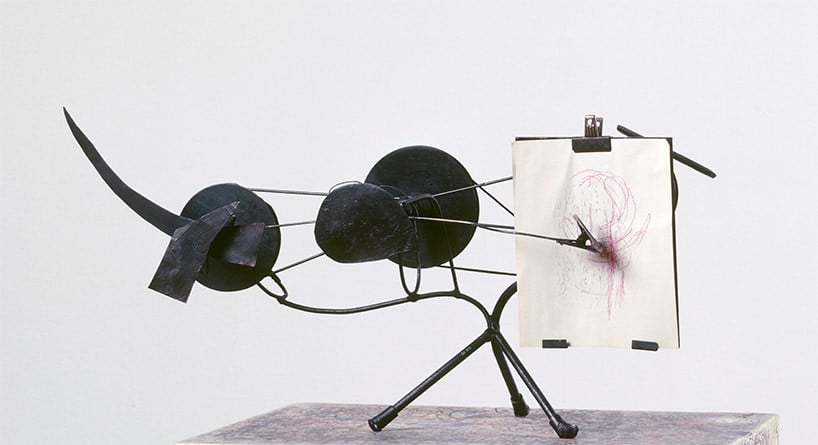 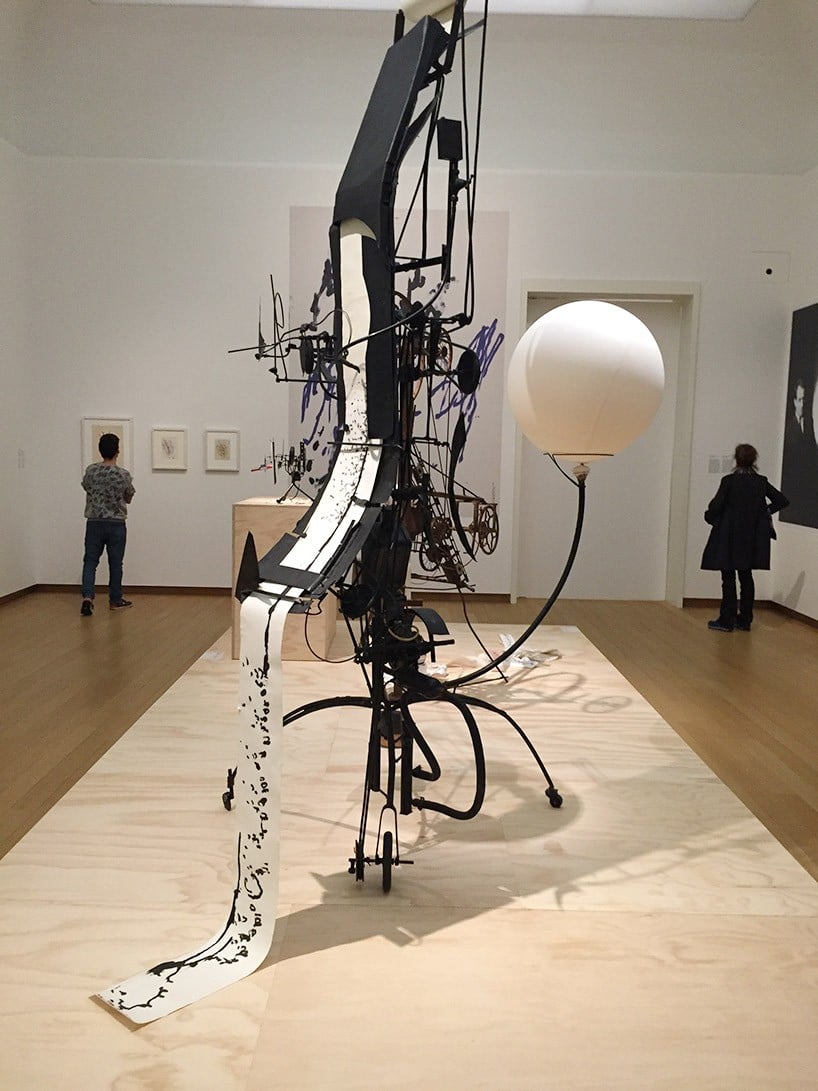 over a hundred machine sculptures, most of which are in working order, are presented at the exhibition
image © designboom 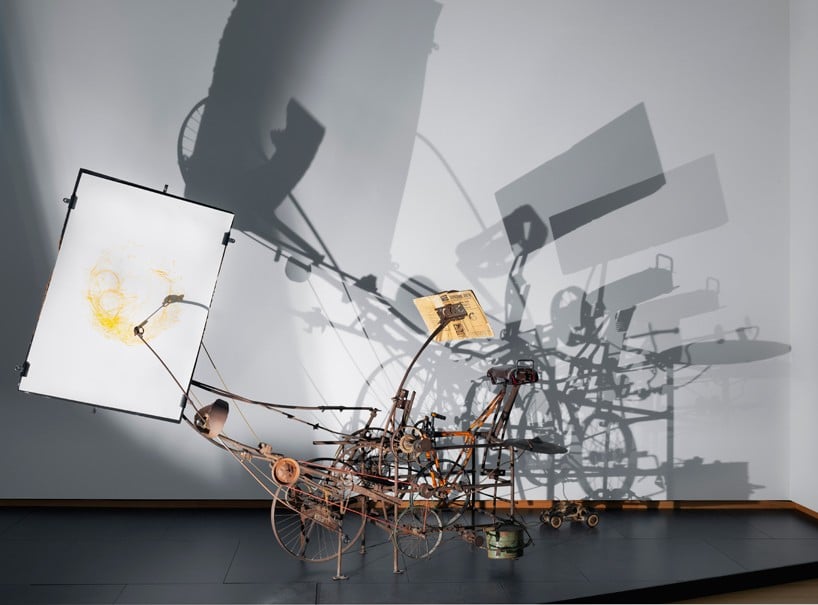 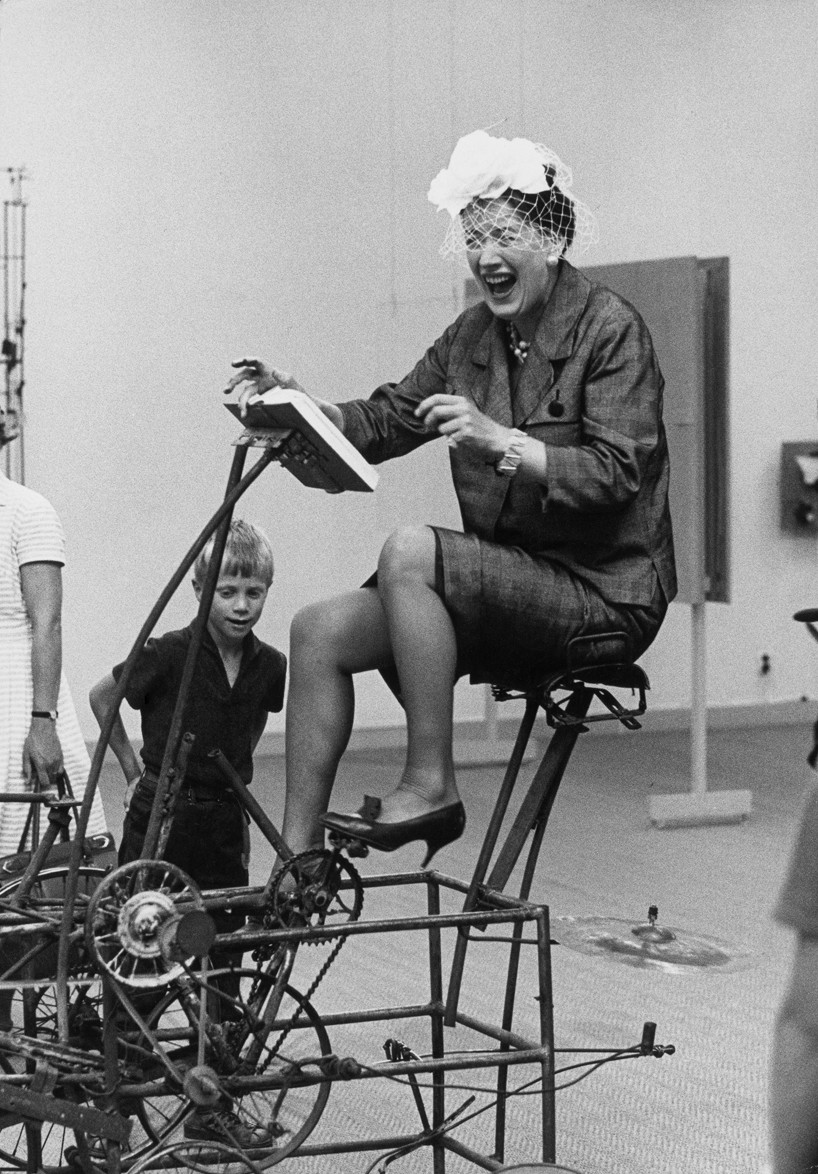 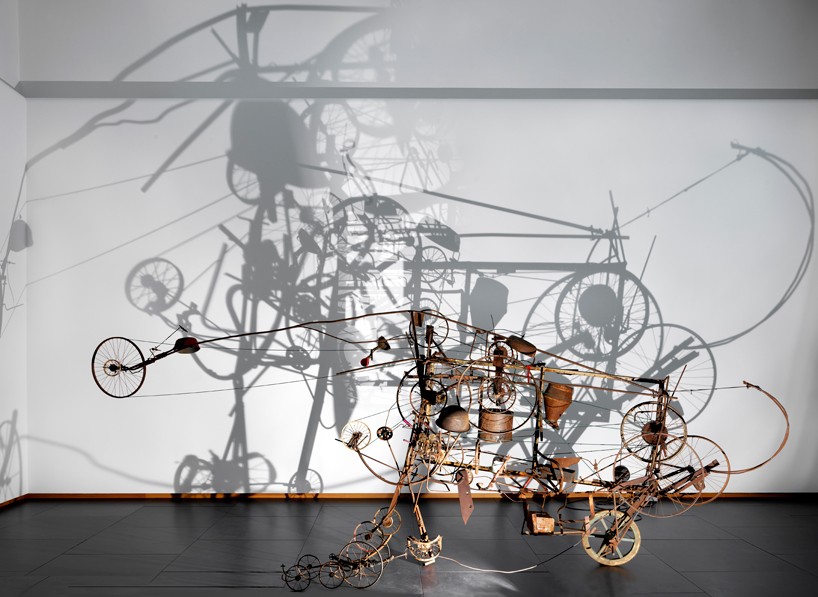 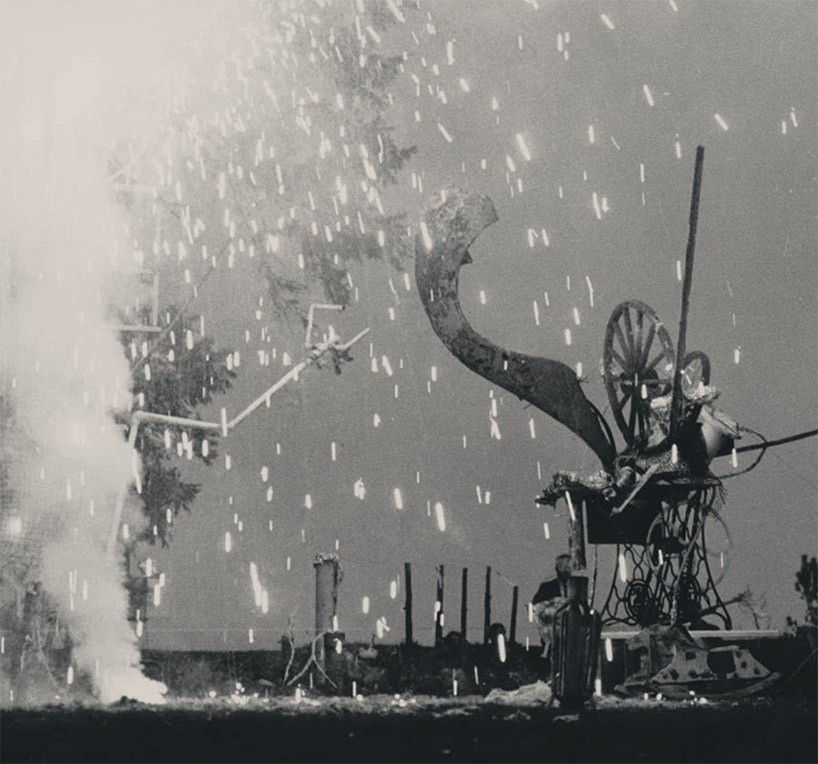 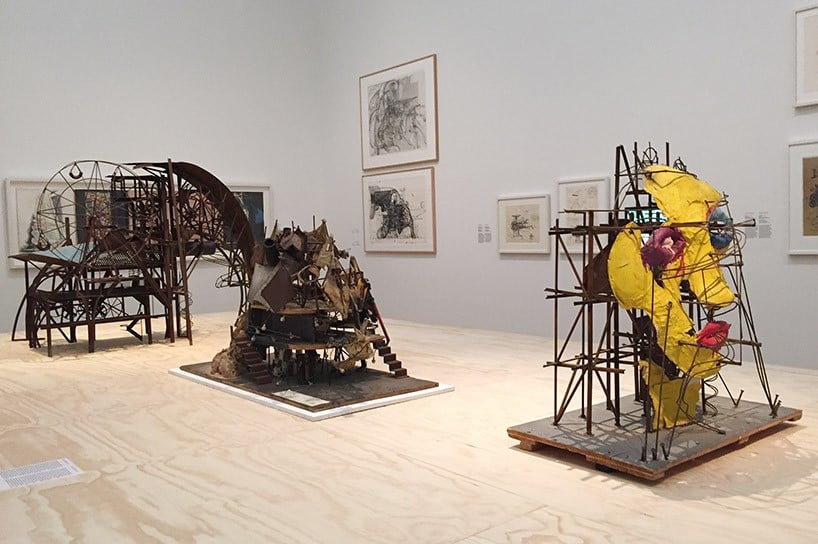 installation view at the stedelijk museum in amsterdam
image © designboom 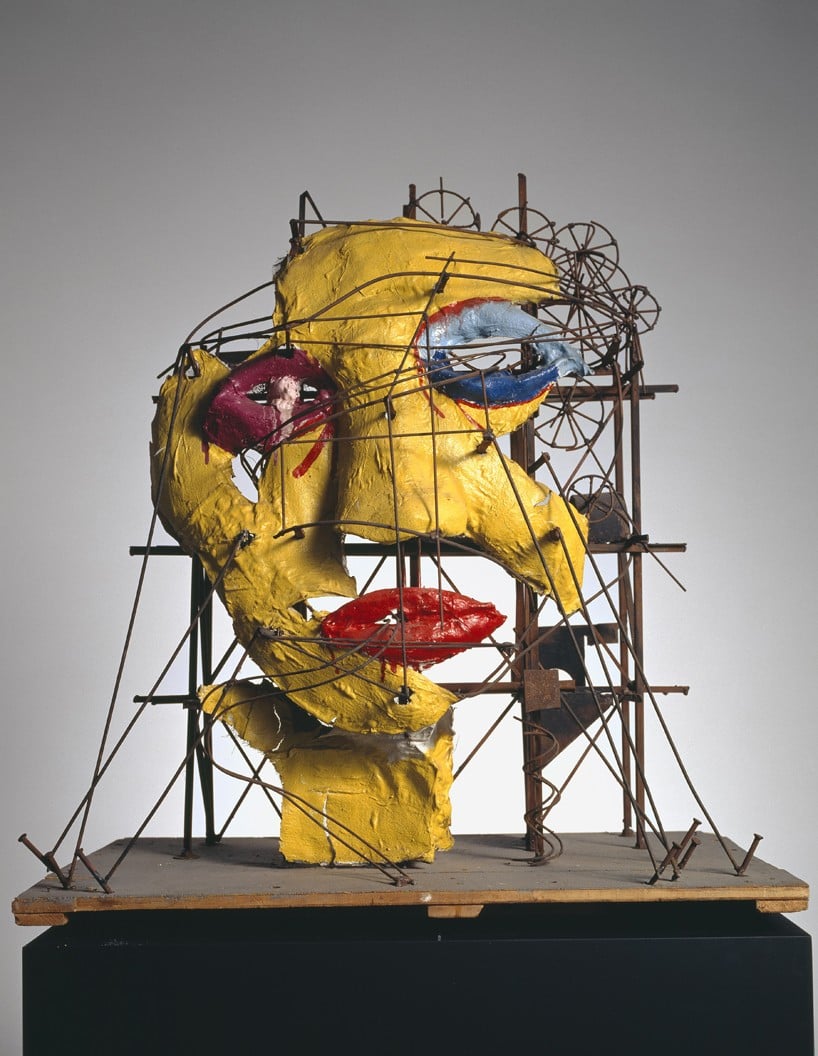 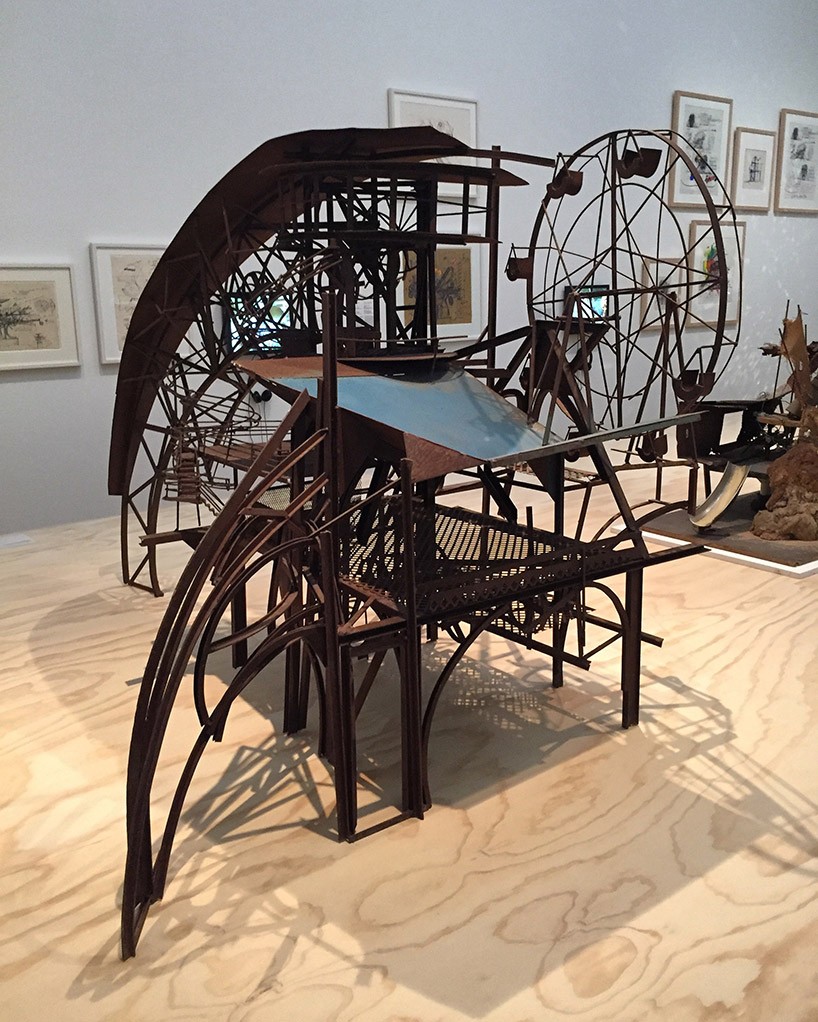 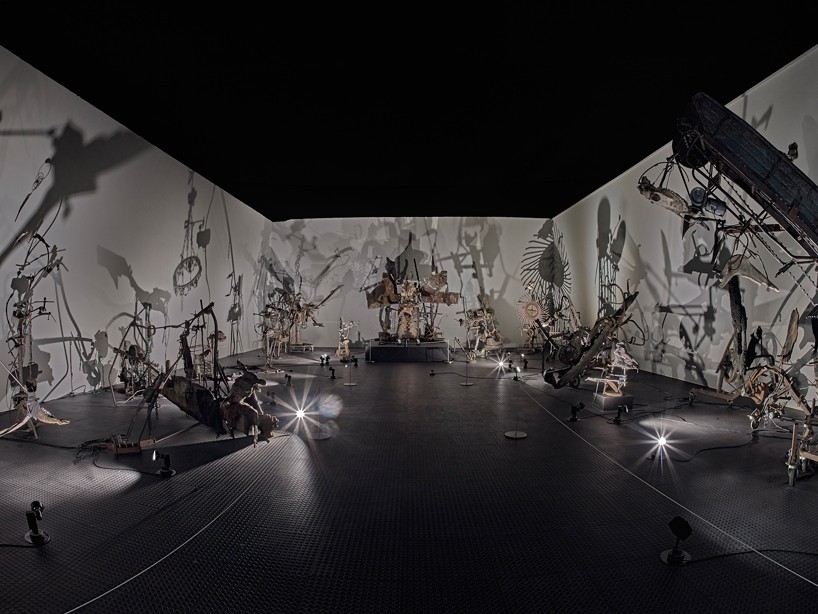 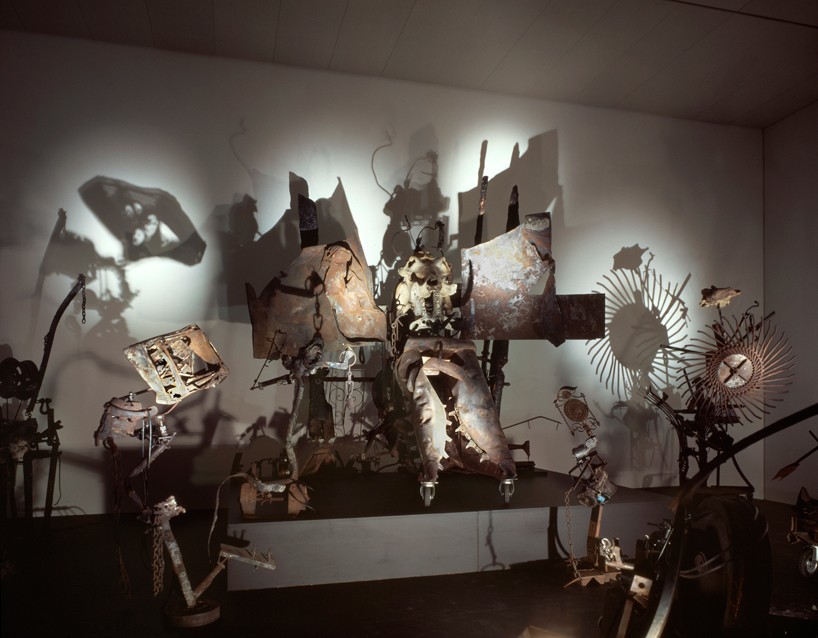 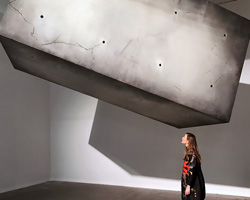 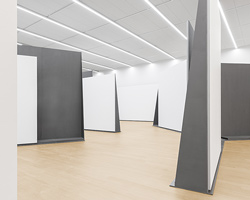 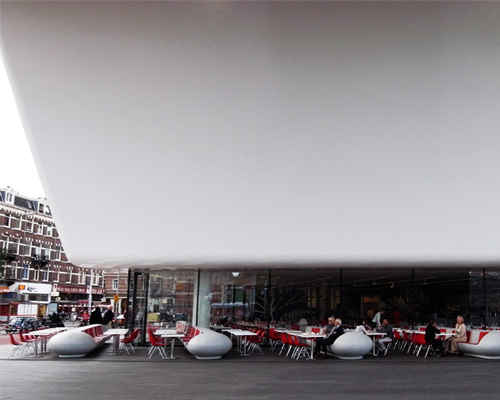 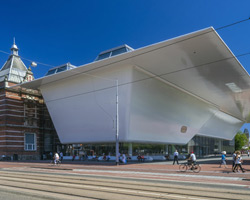