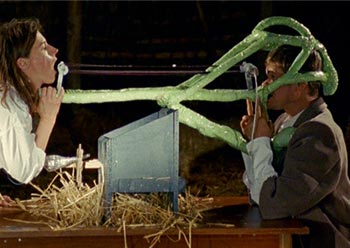 still from the video ‘meechfieber’

this is john bock’s first solo show in an italian institution. animated by a kaleidoscopic profusion of objects, materials, fabrics and bizarre coloured prosthetics, john bock’s films and videos take their first inspiration from reality, altering it through magnification or deformation. the elements and ideas composing our daily life become an endless parade of clowns, puppets, circus animals and acrobats. – half mad scientist, half buster keaton – john bock, the philosopher of chaos, has built through his installations, performances and videos a playful world, where everything seems to be at the same time connected and dispersed – a universe founded on a dramatically personal (dis)order. he exhibited a series of videos and film installations that both condense and enlarge his performance pieces into an endless tour de force ofnarratives and permanent digressions. 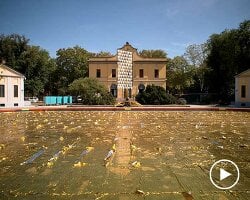