in the wake of the terrorist attacks on july 22, 2011 on the government quarter in oslo and the island of utøya in norway, the government established a committee to produce two memorial sites in commemoration of the tragic loss of 77 victims. the unanimous winning proposal has been designed by swedish artist jonas dahlberg, who has visualized ‘memory wound’, a metaphorical trauma splitting the earth in half. produced by KORO, the eleven-foot-wide cut within the woodland landscape intends to recreate the physical experience of something being taken away, and to reflect the abrupt and permanent loss of those who died in the youth camp on utøya island. this permanent gap breaking the landmass in two will make it impossible to reach the end of the headland.

visitors are guided along a wooden pathway through the forest, creating a contemplative journey to the site of the cut. a pathway traverses into a tunnel, leading within the rocky landscape directly to the dramatic edge of the void. at the border, those on channel of water materialized by the slice can see the flat vertical stone surface of the other side, where the names of those who died will be visibly inscribed into the terrain. the names will be close enough to read clearly yet ultimately out of reach, an acknowledgement of what is forever irreplaceable. 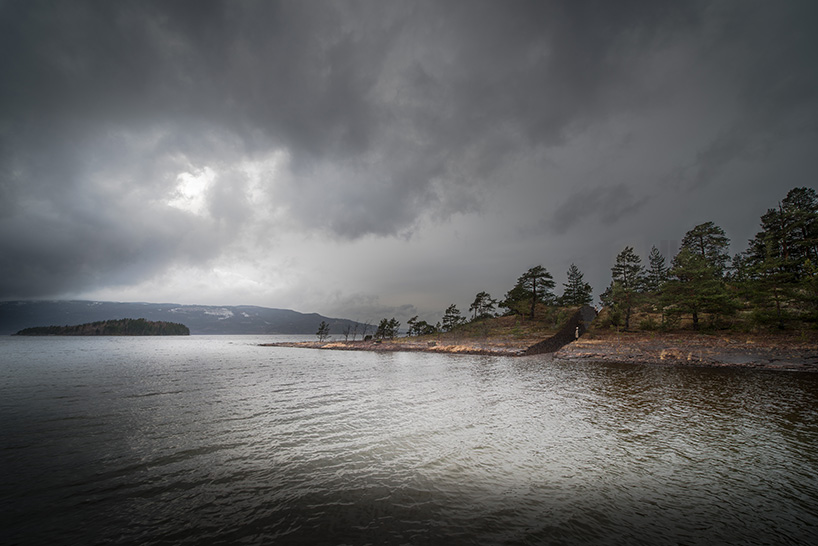 the gaping void in the landmass will make it impossible to reach the other side
illustration © jonas dahlberg studio, courtesy of KORO

materials excavated from the cut at sørbråten will be appropriated to build the foundation for the temporary memorial at the government quarter in oslo, as well as later for the permanent memorial — designed as a place for sustained dialogue. the natural materials include 1000 cubic meters of stone excavated from the cut, and trees and plant life gathered from the creation of a pathway through the forest. these elements will create a memorial walk, contemplating how movement and the passage of time are important elements in the process of grief, memory and growth. the proposed permanent memorial site in oslo takes the form of an amphitheater, again using trees taken from sørbråten and bringing them into the urban environment, maintaining the relationship between the memorial sites in the capital and to the victims at utøya. 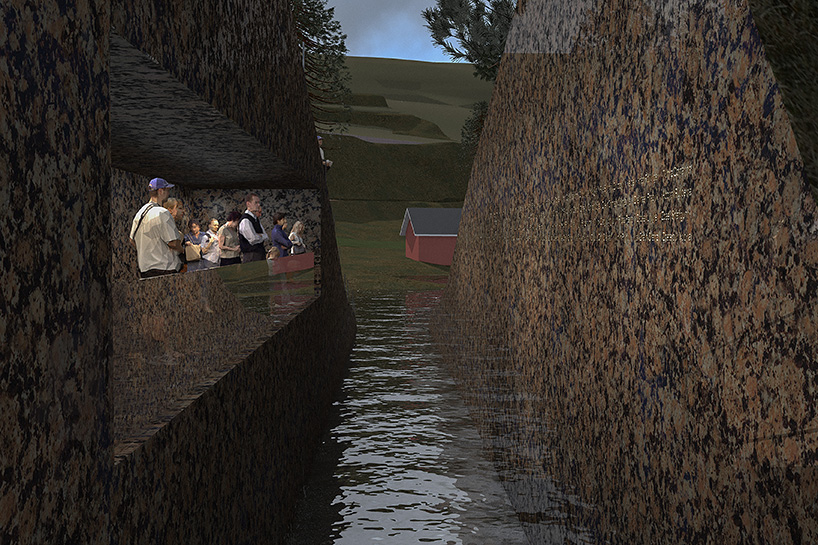 the names of those who died will be visibly inscribed into the terrain
illustration © jonas dahlberg studio, courtesy of KORO 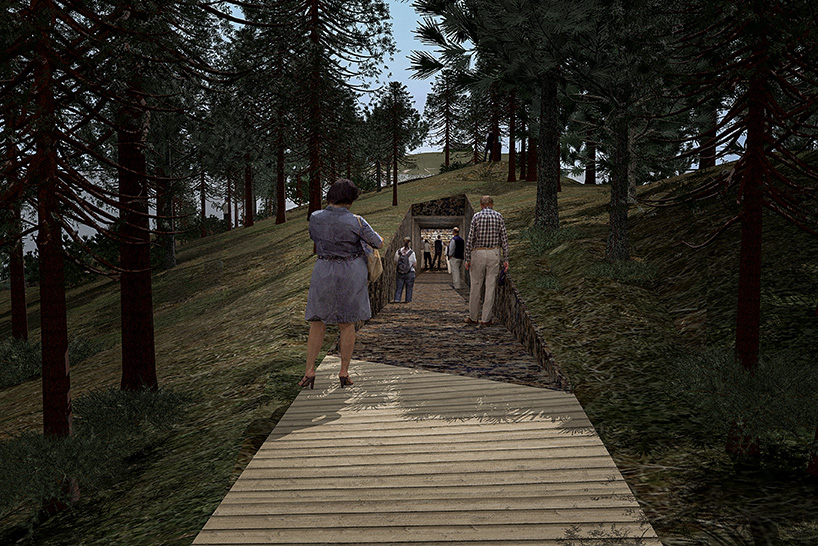 a pathway traverses into a tunnel, leading within the rocky landscape
illustration © jonas dahlberg studio, courtesy of KORO 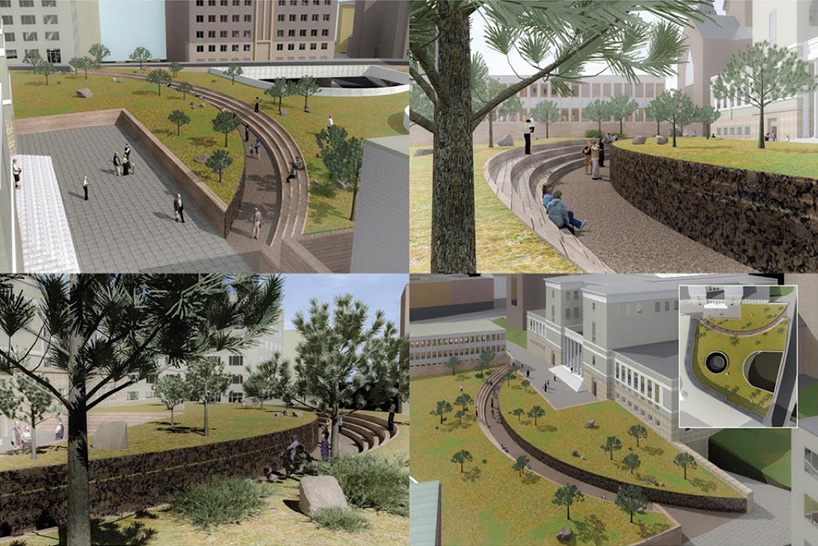 ‘time and movement’: the stone, trees and plant life excavated from the cut will be used to create a memorial walk
illustration © jonas dahlberg studio, courtesy of KORO 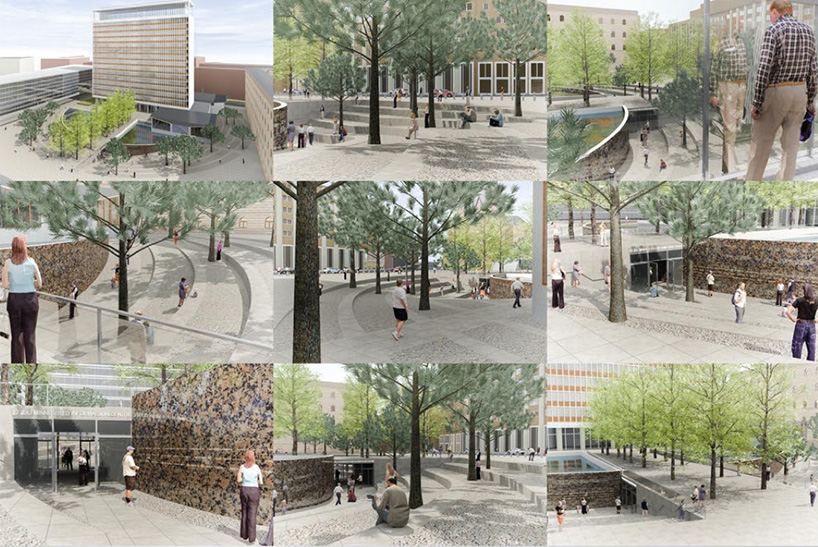 dialogue for the future: the stone cut, combined with elements from the temporary site will be used to create a memorial amphitheater
illustration © jonas dahlberg studio, courtesy of KORO 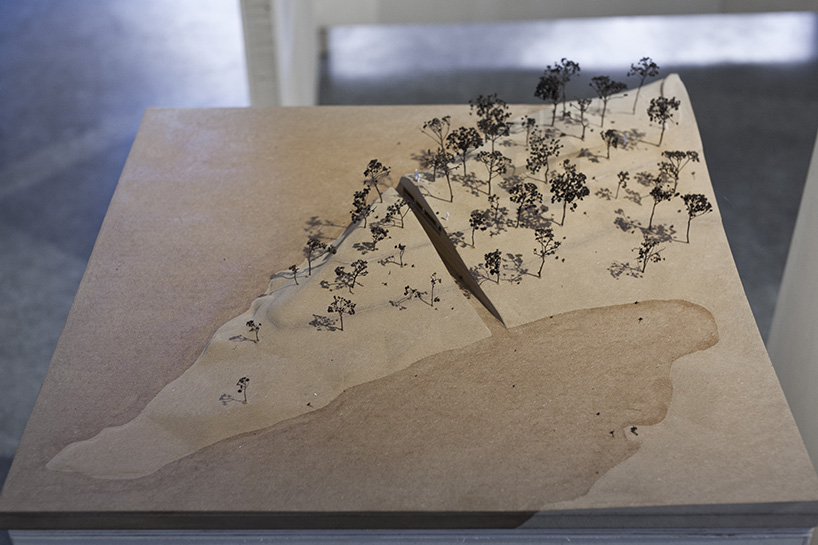 a model describes the clean incision
photo by benjamin tallerås