in his project for akiyoshidai international art village residence support program, jorge mañes rubio takes visitors to his exhibition ‘mission: U-TOPIA’ on a journey, where the local landscape of yamaguchi prefecture stars as the backdrop for a complex fictional narrative. drawing inspiration from the southern japanese town, rubio has created a collection of objects and installations drawing from historical references, futuristic materials and fascinating locations, revolving around a short story he wrote while on site.

the exhibition is told through the eyes of rubio’s fictional character akitoshi fujiyama, an amateur golfer and japanese engineer who discovered a lunar meteorite on a local golf course. the incident would become some sort of revelation for fujiyama, who afterwards decides to dedicate the rest of his life to fulfill his ambition: going to the moon. several artifacts, such as a section of the lunar module or the cosmic japanese screen, are displayed together with photographs and various memorabilia. read the full story by jorge mañes rubio below: 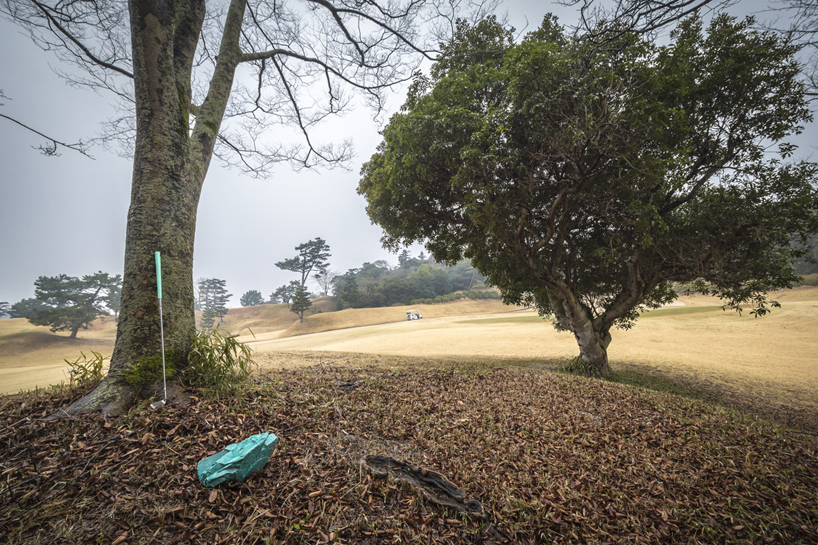 ‘on a cloudy morning and while practicing his drive, amateur golfer and ube industries engineer akitoshi fujiyama goes into the bushes of the ube country club to retrieve a lost golf ball. instead, he finds a strange looking object, what he assumes to be some sort of meteorite. the most intriguing feature of this rock is its vivid turquoise tone, which somehow reminds him of UBE’s corporation color. feeling almost certain of being in front of an amazing discovery, akitoshi decides to break off a piece of the meteorite with his golf club, keeping a big chunk of it for himself as a good luck charm before notifying the authorities.

a few weeks later, the authenticity of the lunar meteorite is confirmed. the meteoritical society decides to name it UBE 064 after the place where it was found (UBE country club 64th hole). the scientific community remains perplex by the outstanding properties that this extraterrestrial mineral possesses, and its potential future applications.’ 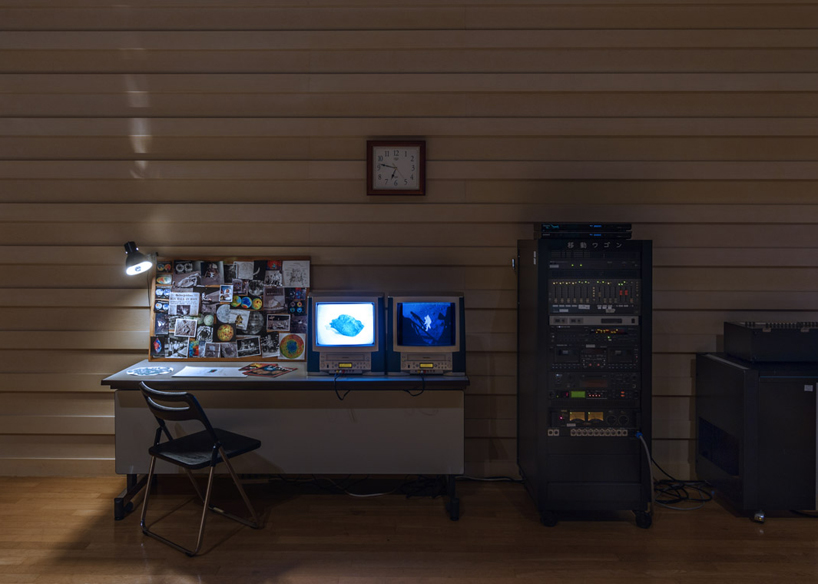 ‘meanwhile, aware of the importance of his discovery, akitoshi fujiyama starts plotting a very ambitious plan of his own. he decides on breaking up his hidden moon rock into hundreds of pieces and selling them in the black market in order to finance his new dream: going to the moon. he starts planning his own lunar mission that will allow him to bring back about 380kg of moon rocks and start a new and prosperous business in his small town of akiyoshidai.

akitoshi starts by contacting the japanese lunar embassy and using most of his savings to buy several acres of lunar land. his plan is strictly confidential, and only his wife, akiko fujiyama, and his two best friends satoshi and tetsu know about it. nothing can change akitoshi’s mind, as he’s determined to use all his connections in the whole prefecture of yamauchi to start gathering different aerospace intelligence and materials, while entrusting each one of his accomplices with different tasks to complete his flawless plan.

the first thing akitoshi needs is a location for his mission control center. this subject is very sensitive, since he needs to keep this location and his mission secret, whatever the cost. an abandoned pachinko building in the outskirts of mine city probes to be the perfect place. the old building has been shut down for several years now, yet akitoshi is captivated by its modern architecture and mysterious name: U-TOPIA.’ 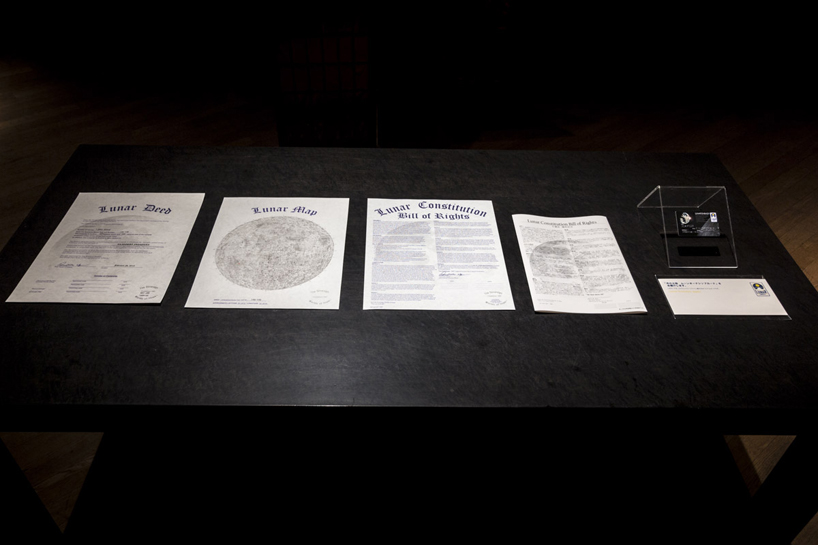 ‘mission: U-TOPIA is now a reality. akitoshi asks his friend satoshi, who runs an auto repair shop in a village near by, to help him building a lunar module that will carry him to the moon and back. when the evening comes, satoshi’s auto repair shop is transformed into u-topia operations centre. assembling auto spare parts together, the two friends start building together their most ambitious project ever.

akitoshi’s biggest concern is being able to navigate through the dark and deep lunar craters of the south pole of the moon, where he’s almost certain of finding his cosmic bounty. akitoshi will need some serious driving skills to find his way around these dark craters on board of his lunar rover. luckily for him, his long-time friend and co-worker at ube industries tetsu is willing to help. tetsu has been driving a gigantic 80-tonnes ube truck for a few months now, as part of a top-secret project. word on the company is that ube industries is also on the race to the moon, and has set up a lunar training environment on earth to prepare this mission. tetsu has agreed to help out akitoshi on his mission:U-TOPIA project, and has installed a geologic map of the south pole of the moon on the front of his truck, as to start getting his friend familiarized with this remote area while driving together along UBE’s private highway.’ 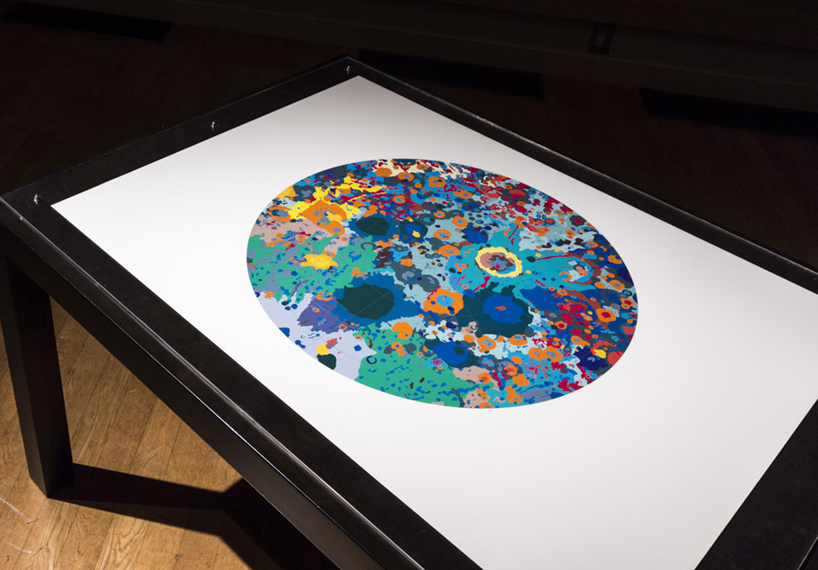 geologic map of the south pole of the moon

‘akitoshi is aware of the risks and dangers that his plan might lead to, but he has no intentions of backing off. he’s concerned though of spending such a long time alone in the space, and missing his home. he’s never been outside of japan after all. akitoshi decides then to create a very special object, a cosmic byobu. inspired by the traditional japanese screens, he decides to design and build his very own to decorate the interior of his lunar module. akitoshi cleverly uses aerospace materials from UBE industries such as the high temperature resistant polyimide film upilex, using it as a thermal blanket and for protection against galactic cosmic rays outside the earth’s atmosphere.’ 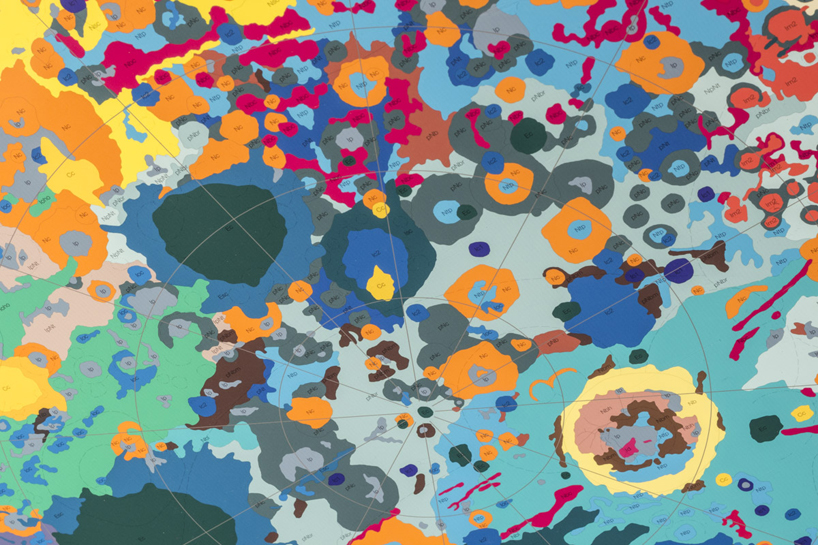 ‘if there’s someone concerned about akitoshi’s plan though, that’s his wife akiko fujiyama. she tries to take her mind off the lunar mission practicing ikebana at home. akiko wants to support her husband as much as possible, but she’s also aware of the many dangers that he will have to endure to complete mission:u-topia. in a romantic gesture, one night akiko decides to tear apart her most precious kimonos and obis and turn them into astronaut patches. she stitches them one by one into akitoshi fujiyama’s space jacket, hoping that these will protect him during his lunar journey.’ 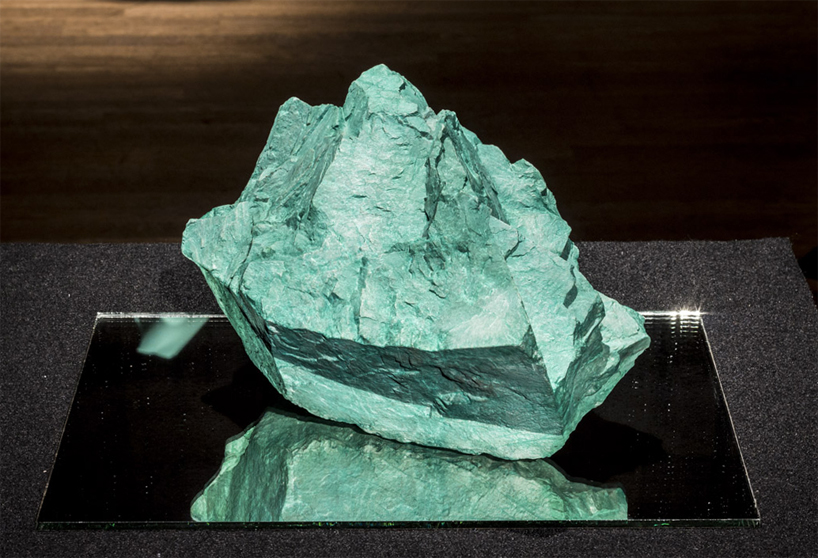 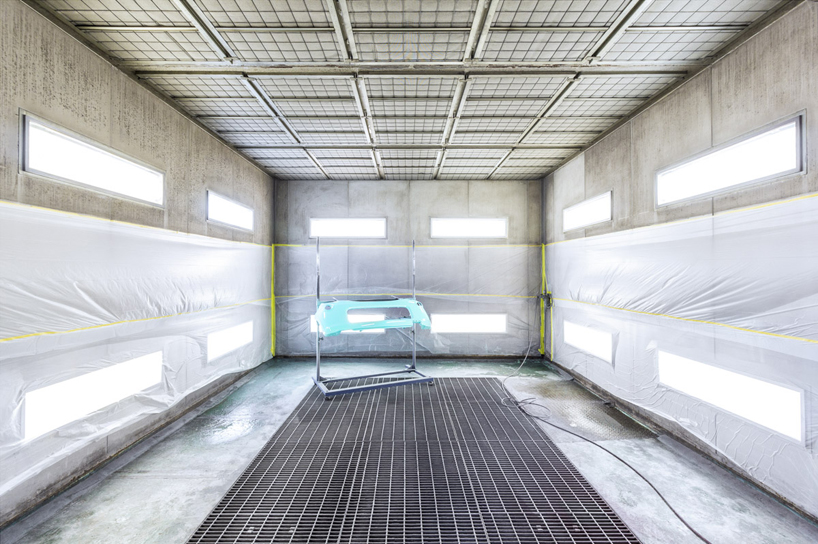 a fragment of the lunar module at the auto repair shop run by satoshi, akitoshi fujiyama’s friend 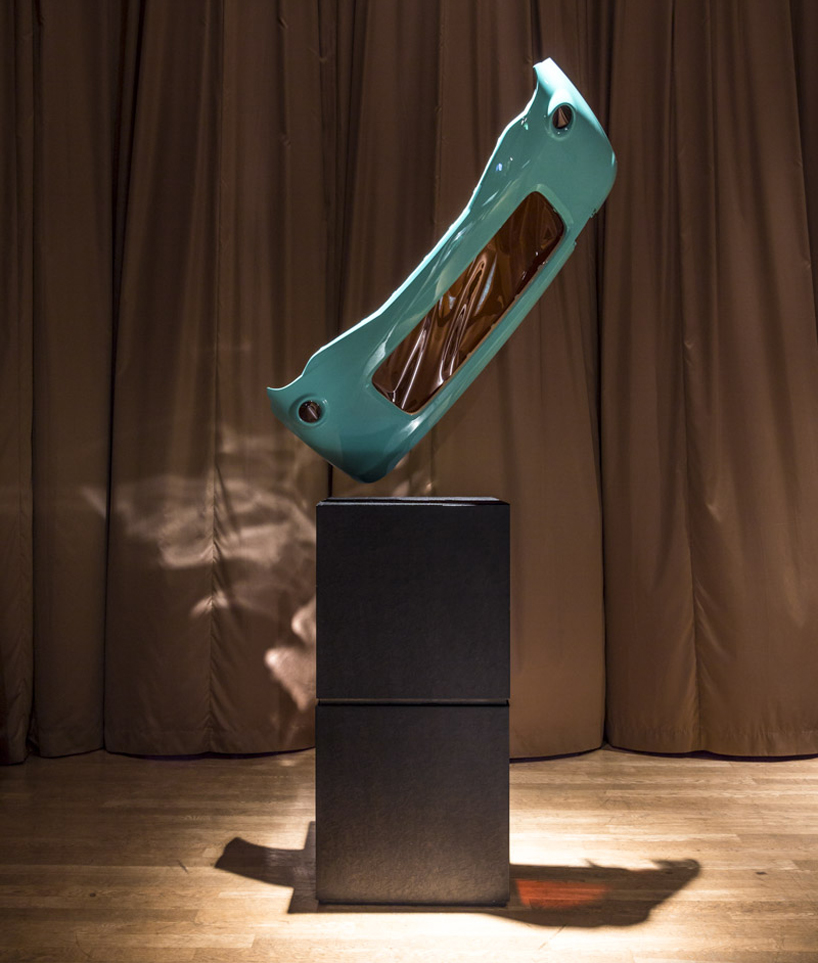 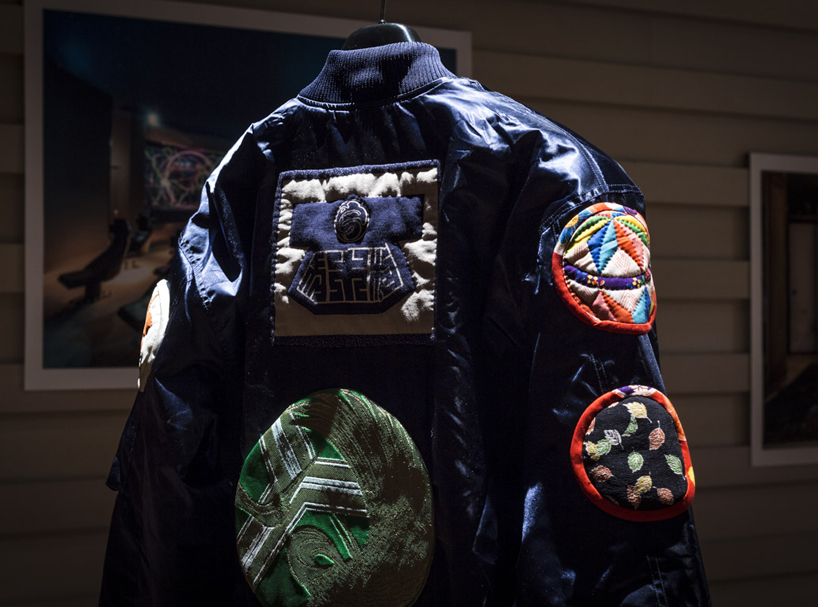 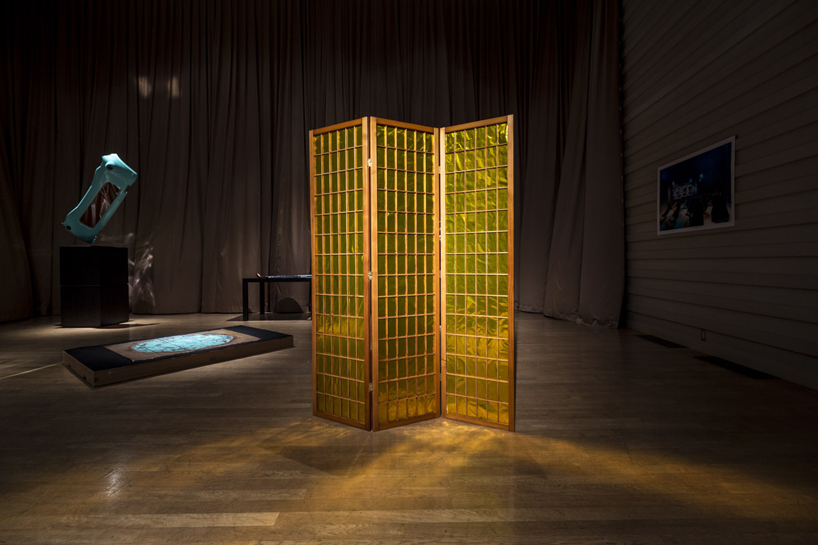 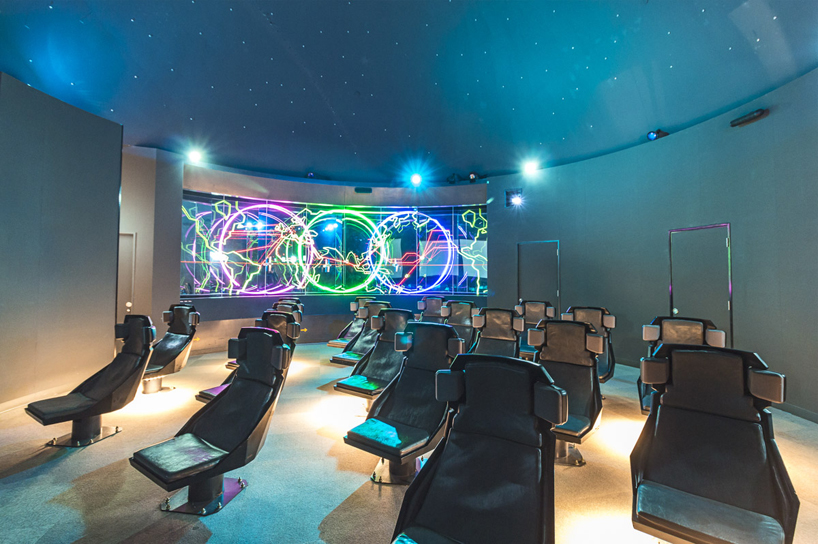 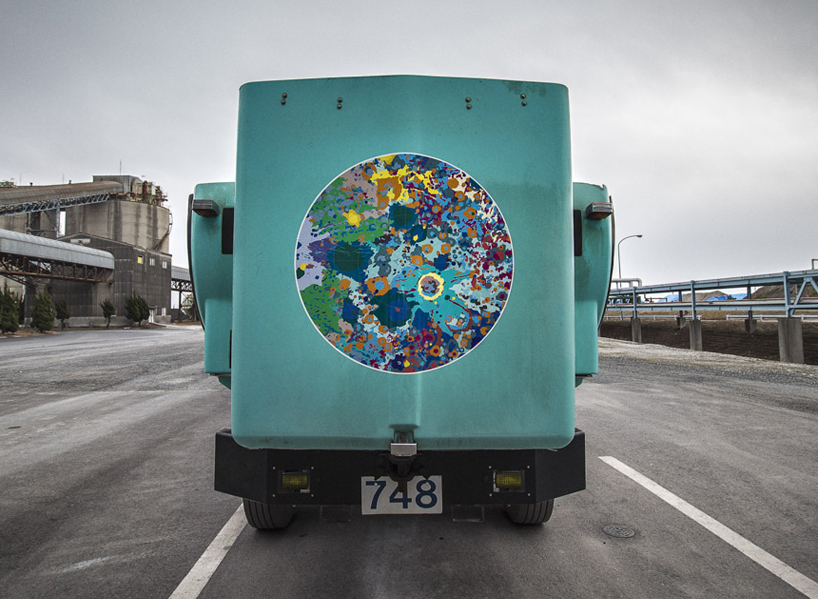 cosmic byobu: a japanese screen built with upilex, a material manufactured by UBE industries for aerospace purposes. this high temperature resistant polyimide film is regularly used as a thermal blanket and for protection against galactic cosmic rays outside the earth’s atmosphere.

a detail from the south pole–aitken basin

a view of the AIAV, designed by arata isozaki in the mountains of akiyoshidai, japan

the industrial landscape of UBE

view from the bottom of isa limestone quarry, run by UBE industries

lookout point on top of sakurayama mountain, location chosen by akitoshi fujiyama as a probable location for the space shuttle launch center

u0-tones UBE truck featuring a geologic map of the south pole of the moon travels along ube’s private highway. this road, connecting isa quarry and UBE city is japan’s longest private expressway. trough this action the artist questions the concept of ownership towards public and private spaces, transforming this road into a 31.94 km long cultural venue. artworks travel back and forth 20 times a day and locals are encouraged to spot them from one of the many walkways over the highway.

the dark side of the moon

Jun 01, 2021
'art never stops' — chiharu shiota on 'living inside' and creation in quarantine
designboom spoke with the artist about the experience in lockdown that led to this new body of work, now presented at galerie templon.
art
303 shares
connections: 56