JR has taken an active stance in solidarity with ukraine. the french artist traveled to lviv, a large city near the polish border, and a gateway to the west for refugees — most of the three million people who have fled the country have passed through the city’s train and bus stations. meanwhile, soldiers, weapons and humanitarian aid move east into the rest of the country as hundreds of volunteers gather each day at the lviv palace of arts to assemble bags of food, clothes and toiletries for those in dire need.

JR entered ukraine on march 14th, bringing with him a massive mural depicting valeriia, a five year-old ukrainian refugee. upon his arrival, he was joined by more than 100 residents of the city in a processional march outside the national opera in lviv. JR notes: ‘this little girl is the future and, in this war, she reminds us what ukrainians are fighting for.‘ 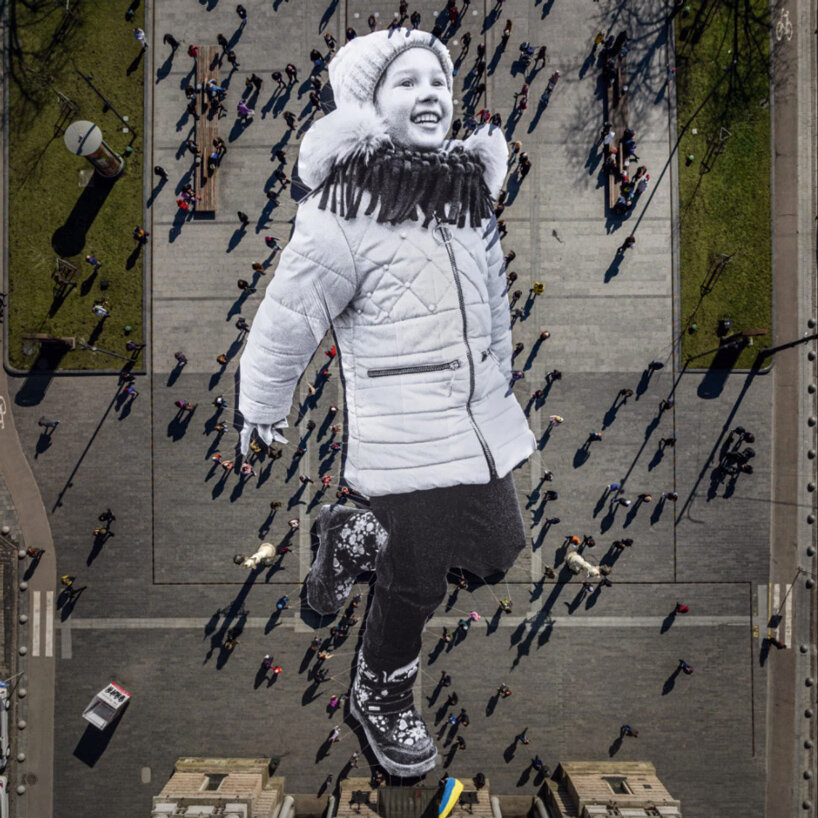 JR (see more) shares his experience first hand, noting that while he had been closely following the events in ukraine over the news or social media, he’d rather be in the action. lviv is only a twenty-hour drive from paris. the french artist comments: ‘it’s the first time that there is a war that is so close to me that I can literally drive to it.’

while watching the war from afar, JR contacted a photographer in ukraine who sent him images of the refugees passing through the border — including the image of five year-old valeriia. JR and his team printed the image on a 150-foot tarp, and drove. after prepping the tarp in the polish forest, they walked with the rolled mural across the border into ukraine.

JR and his team were met by a group of young people at the ukrainian border who drove them into lviv. ‘this is war. it’s real war,’ one says. ‘a lot of people are dying. I remember when I saw the images of war in different countries,  syria, I used to think ‘oh they are poor, this is bad.’ but when you see it with your eyes, it’s scary. they are shooting people. they are shooting kids.’

JR published his journey, and those he met, on social media. in an instagram post he writes: ‘I was in ukraine last week and we decided to gather people around an art project. we printed the image of valeriia, 148 feet tall and carried it around lviv with over a hundred volunteers. during the process we met amazing people.

‘when we left the country we realized how the conflict impacts people and how the long lines at the border make it very difficult for women and children who are the ones fleeing. we want to bring help at the different border crossings. if you’d like to participate, we are launching an NFT in the next days..‘

JR has now released the NFT series, which can be found here. two NFTs are available — a video entitled ‘valeriia unfurling’ can be purchased for 0.08 ETH (currently around $3K USD), while the ‘valeriia’ still photo NFT can be purchased for €180 EUR ($198 USD). all profits for the project will go towards creating a logistical chain to support refugees at different ukrainian border crossings.