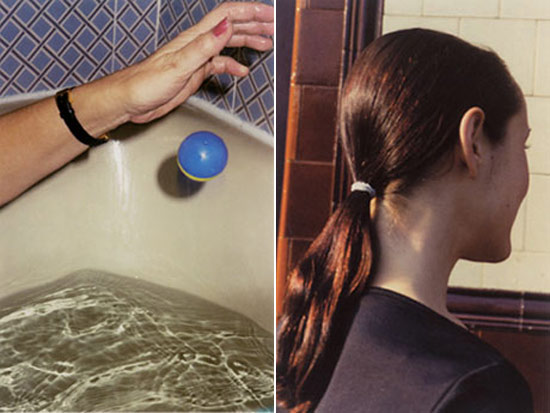 (curated in collaboration with the fotomuseum muenchener stadtmuseum, munich and the folkwang museum, essen, germany )

—the italian galery shows the first large-scale retrospective dedicated to the german photographer. the exhibition sets out to examine the works of teller through 125 original shots, the ‘go sees’ video, and numerous photographs published in the best-known fashion magazines during the 1990s.—juergen teller is one of the most influential fashion photographers of the last years. ‘go sees‘ shoots (426 shots in total) / film / bookteller worked for more than a year in his london studio photographing girls,just as they presented themselves as they knocked on his door, plain or refined, beautiful or not. girls, who called at teller’s studio for an informal meeting in the hope of securing the modeling contract that would lead to fame, fortune and a life of ‘glamour’. what emerges from these shots (the girls are portrayed in no other pose than that of them ringing the doorbell) is a study which addresses the subject photographed far more than the formal aspects. their being anything but glossy, the artist’s portraits constitute an understated criticism of the affectations of the world of fashion and its ideals of beauty. the ‘go sees’ series thus offers a compendium of aspiring beauties trying their best to put on the ‘teller look’: slightly scruffy, all showing the same anxiousness to strike the right pose which will allow them to cross the threshold of the doorway. in the end, the most interesting shots are those of the girls who are least used to this kind of work, those who are not beautiful enough to become models, but who put themselves on show nevertheless.

Apr 08, 2021
linear reflective piece by phillip k. smith III + SOM mirrors the californian landscape
at sunset, the reflection of the glowing sky and onshore clouds merges with floating, shifting gradients of light across the surface of the work.
art
548 shares
readers
connections: 66

Apr 07, 2021
motoi yamamoto shares how memories shape his mesmerizingly intricate salt arrangements
designboom spoke with the japanese artist about how the fragility of salt 'always reminds me that all things are subject to change, and that life is finite.'
art
694 shares
connections: +1490