a mural by keith haring has been revealed in amsterdam 30 years after the US artist completed the commission. originally gifted to the dutch city, the 40-foot-tall mural was covered by weatherboarding a few years later when the building, then the stedelijk museum’s art storage depot, chose to improve its climate controls.

as reproted by artnet, the mural – haring‘s largest in europe – took the artist two days to create the the single-white line which features a mythical dog-headed creature being ridden by one of haring’s X-marked figures. the restoration of the mural was made possible because the museum changed its storage location and the building is now a markt kwartier west grocery store and distribution center. 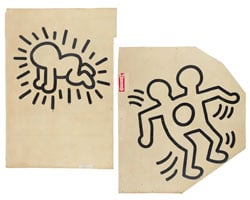