as part of florence’s radical utopias exhibition, the florence institute of design international (FIDI) are exhibiting lapo binazzi’s series of super-sized inflatable objects covered with paradoxical political messages. the installations recall a period in the 1960’s when italian protestor group, ‘UFO’, rallied in the streets for social change. 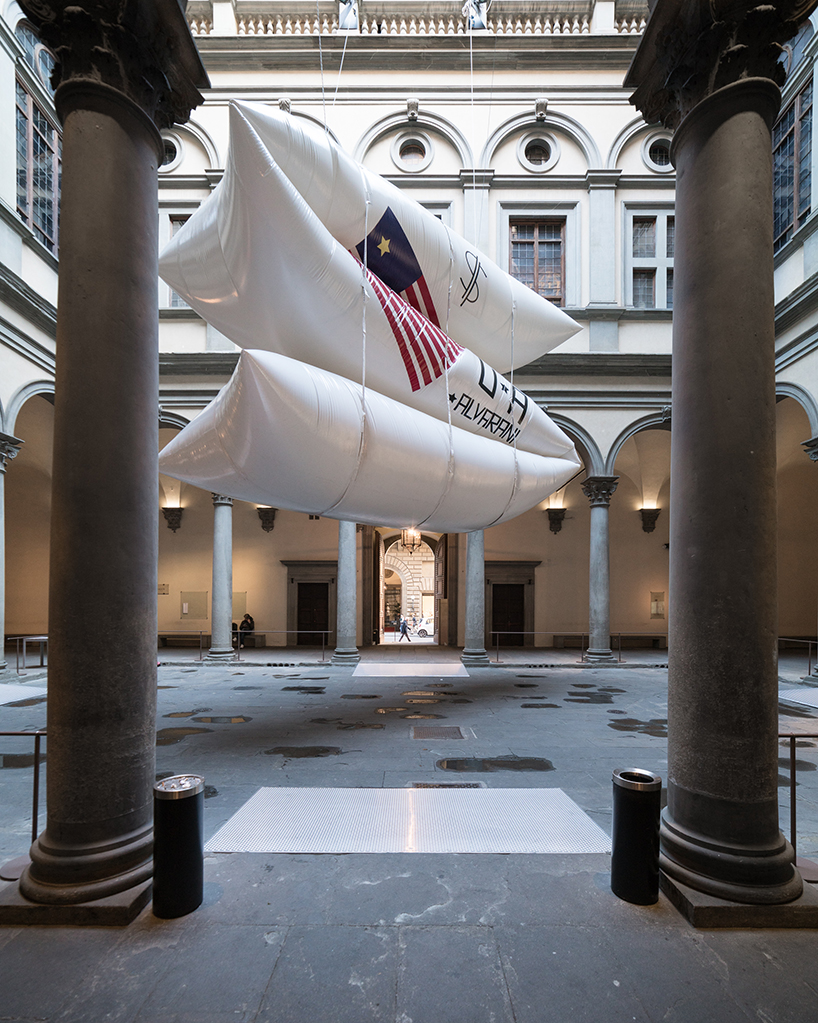 titled the urboeffimeri, or ‘urban ephemeral objects’, the originals were first designed by italian radical group UFO in 1968, featuring phrases that represented themes of anti-war, anti-consumerism, and socialist politics. the pieces were constructed using a lightweight polyethylene tube material and then inflated using modified motors of vacuum cleaners. upon them, political comment expressing the youth’s voice for social change was written using duct tape. 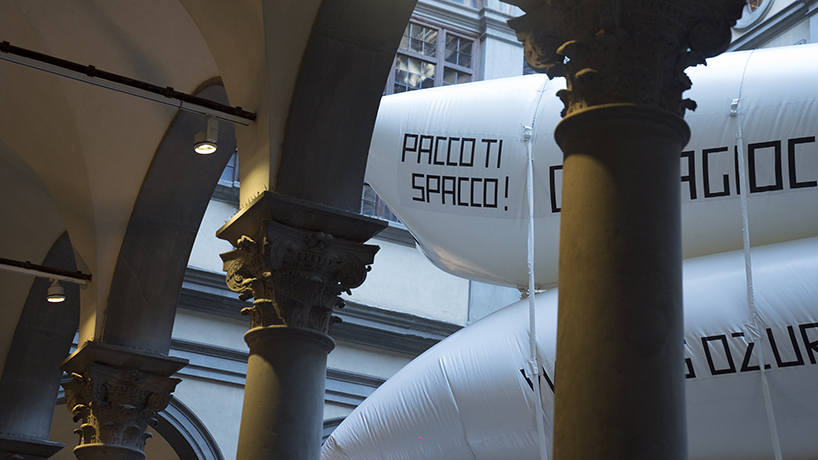 the group was founded by students lapo binazzi, carlo bachi, patrizia cammeo, riccardo foresi and titti maschietto. today, original member and architect binazzi redefines the colours of the graphics, materials and dimensions recalled from his youth, to create the full size reconstructions despite the fact the 1960s artefacts have been lost over time. using black and white 35mm film from the protest, the political messages, shape and form have recreated by image research assisted by the design institute, FIDI. 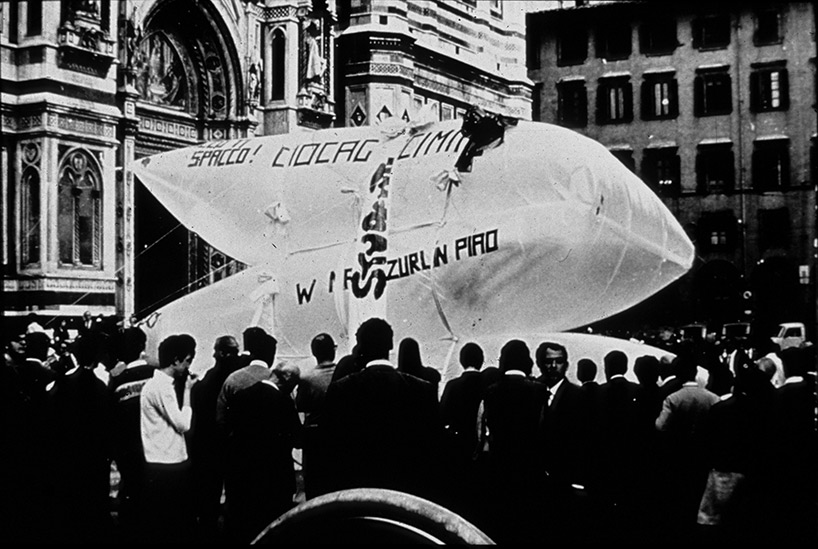 1968 photo of the original ‘urboeffimero 6’ in piazza del duomo, florence

as the name states, the inflatable creations were made to provoke a reaction, lasting only for a short time during expositions or for street protests. ‘they were inflated, served their purpose, and were immediately deflated,’ explains binazzi. 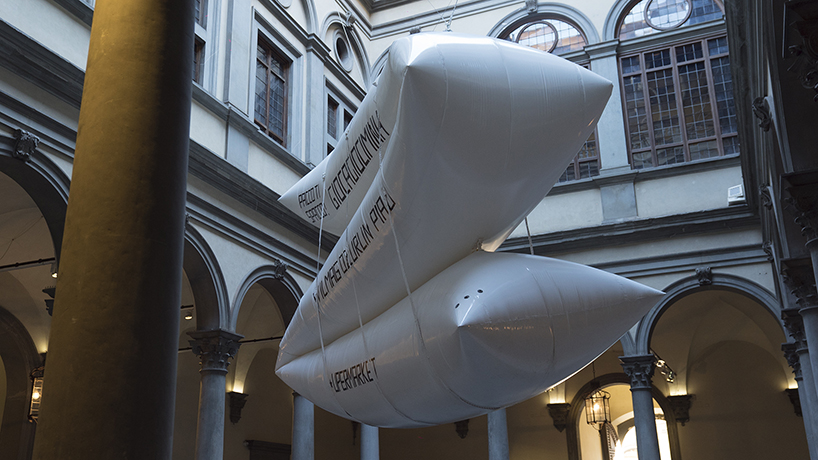 the inflatable reads ‘GIOCAGIOCIMINH’ is a combination of giocagio, a broadcasted
program promoting ciminh, the leader of vietnam in the 1960s

to mark the 50-year anniversary of the radical movement, the ‘radical utopias‘ exposition in florence has put on display new versions of the missile shaped balloons ‘urboeffimero no. 5’ and ‘urboeffimero no. 6’. no.5 is suspended within the trusses of the mercato san lorenzo whilst no.6 acts as a centerpiece to the event and is on public display in the main courtyard of palazzo strozzi. 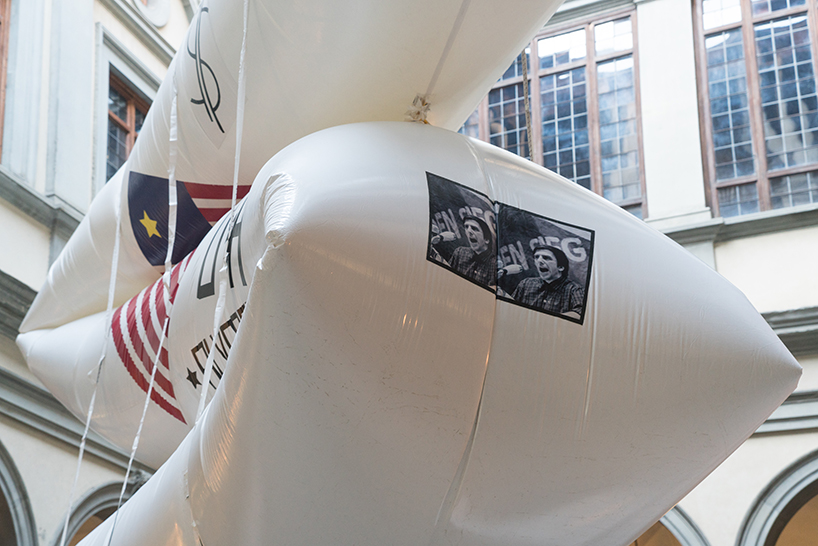 the exposition remembers a critical period turning florence into the focal point of a revolution in thinking that had a profound impact on the development of art at the global level. for the first time in a single venue work from groups and figures such as archizoom, remo buti, 9999, gianni pettena, superstudio, zziggurat and UFO are being exhibited in hopes to create a dialogue between objects of design, videos, installations, performances and narratives illustrating another possible world. 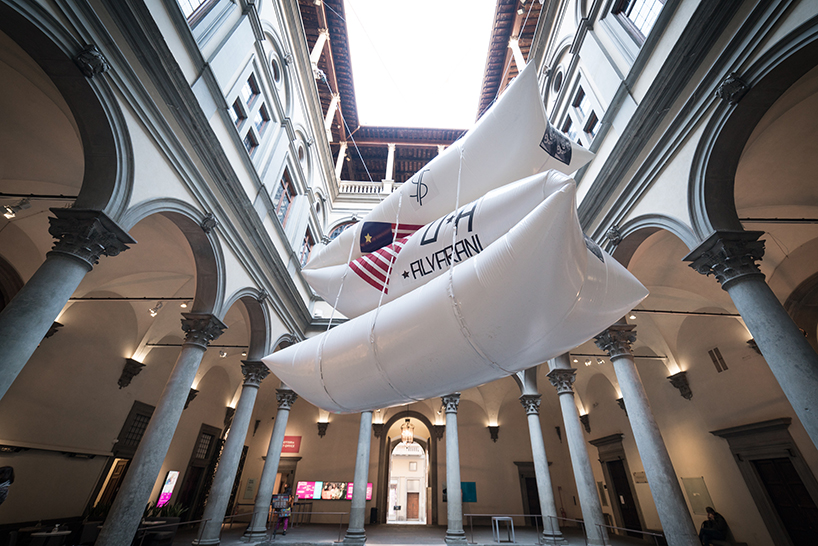 urban ephemeral 6 suspended in the courtyard of palazzo strozzi,
images courtesy of fidi

‘it cannot be argued that the objects were not a success’, continues binazzi. ‘because the protest that featured the no. 6 ‘super s’ ended with the ‘s’ shape opening up into a twenty-four meter long and two meter tall tube that blocked the police from the escaping students’. 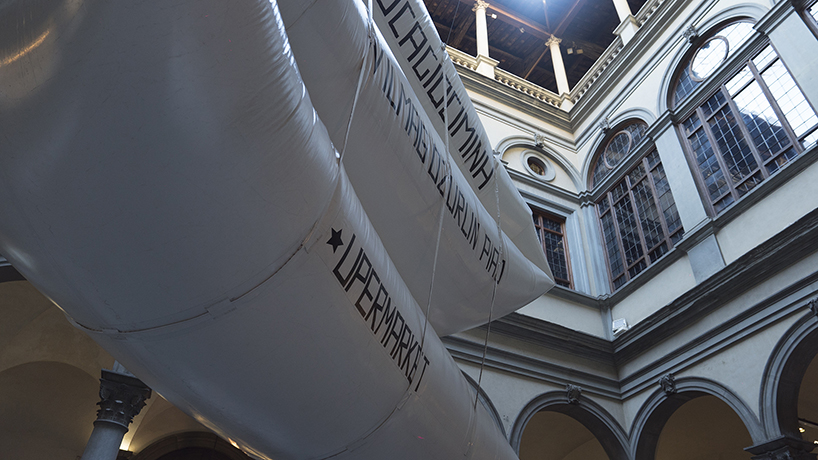 detail shot of the 60’s political messages on the recreated, ‘urboeffimero no. 5’

gallery strozzina hosts ‘radical utopias’ until 21 january 2018 and is curated by pino brugellis, gianni pettena and alberto salvadori. it has been produced and organized by the fondazione palazzo strozzi, the fondazione cr firenze and the osservatorio per le arti contemporanee. 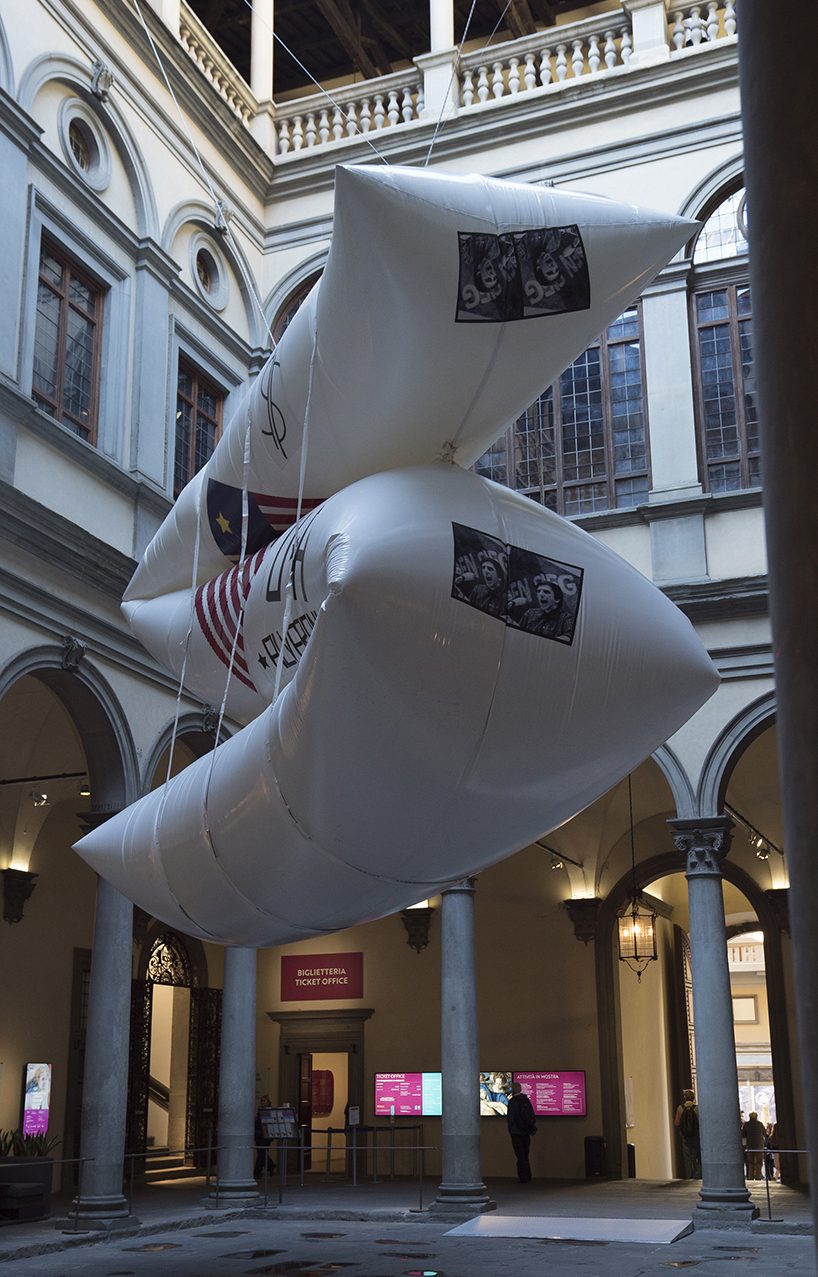 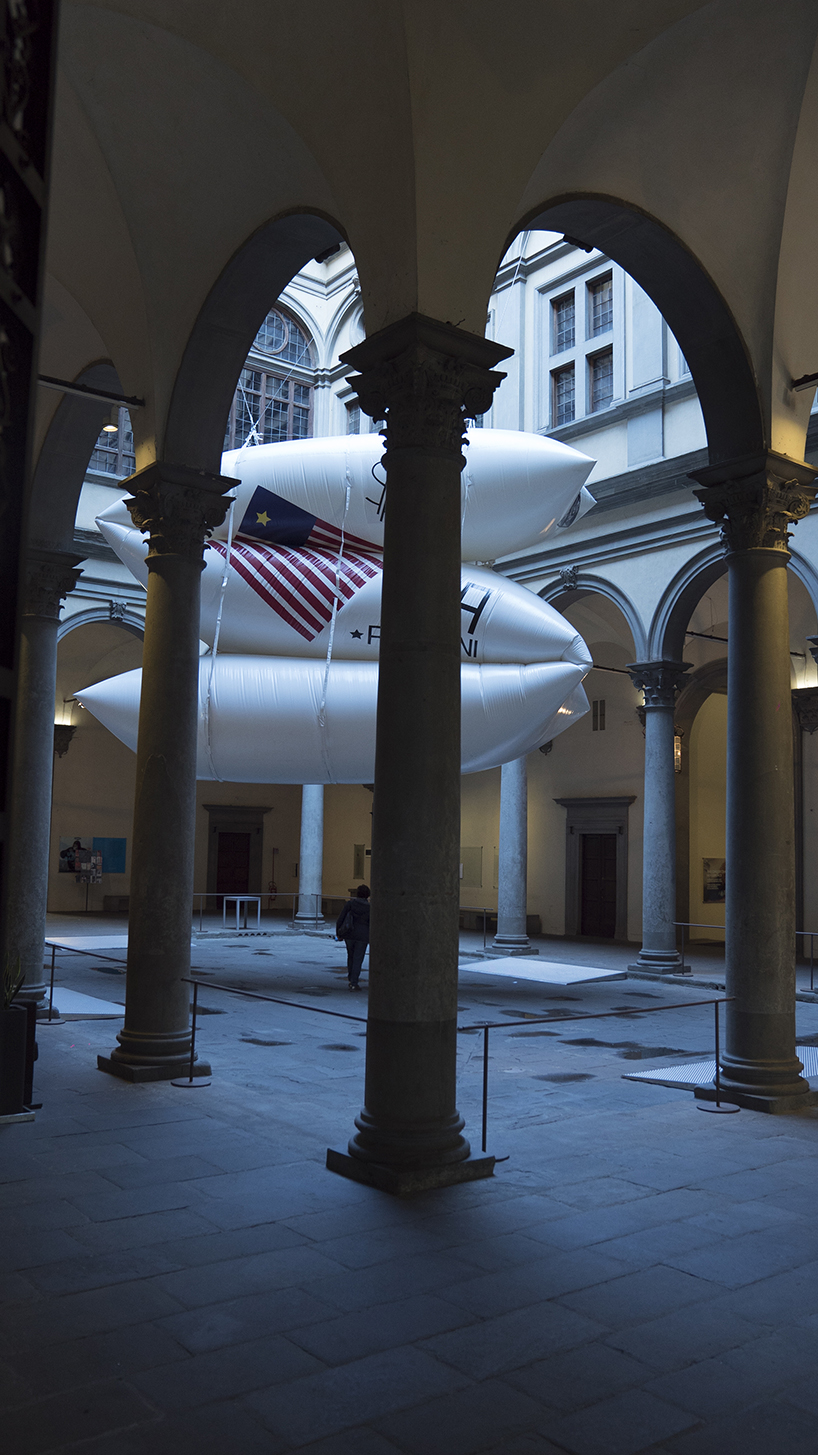 titled the urboeffimeri, or ‘urban ephemeral objects’, were featuring phrases that represented
the themes of anti-war, anti-consumerism, and socialist politics 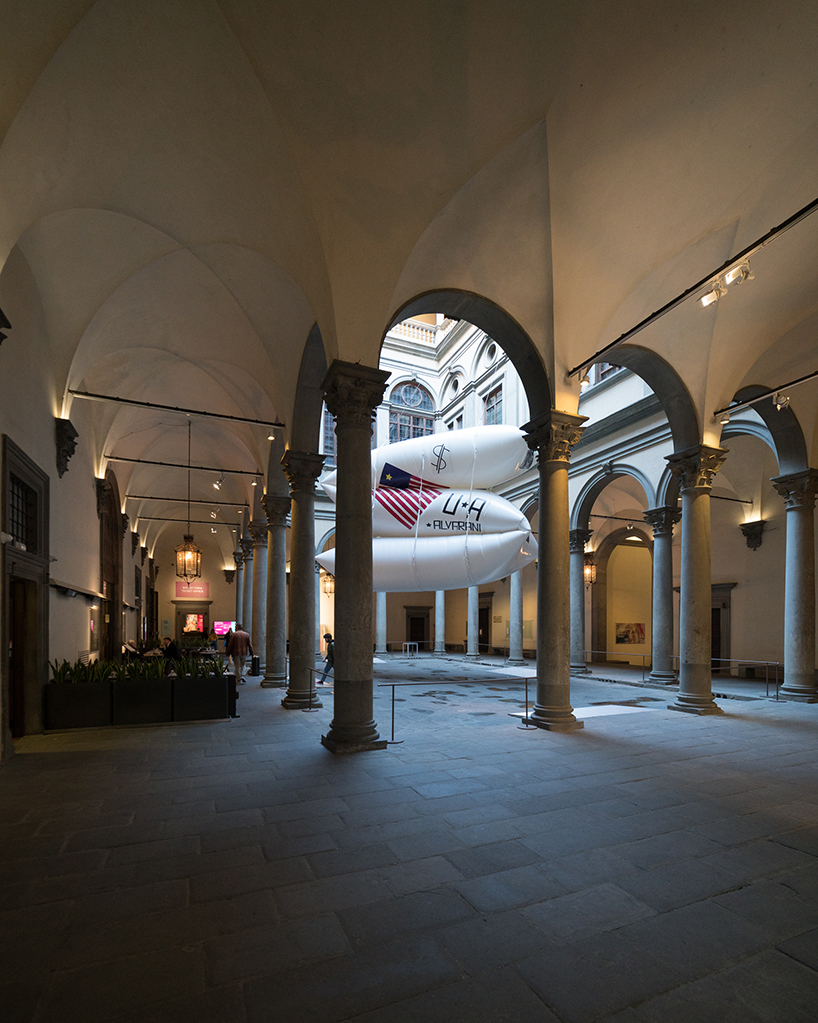 the inflatable object, in the courtyard of palazzo strozziare is a replica of a 1960 original 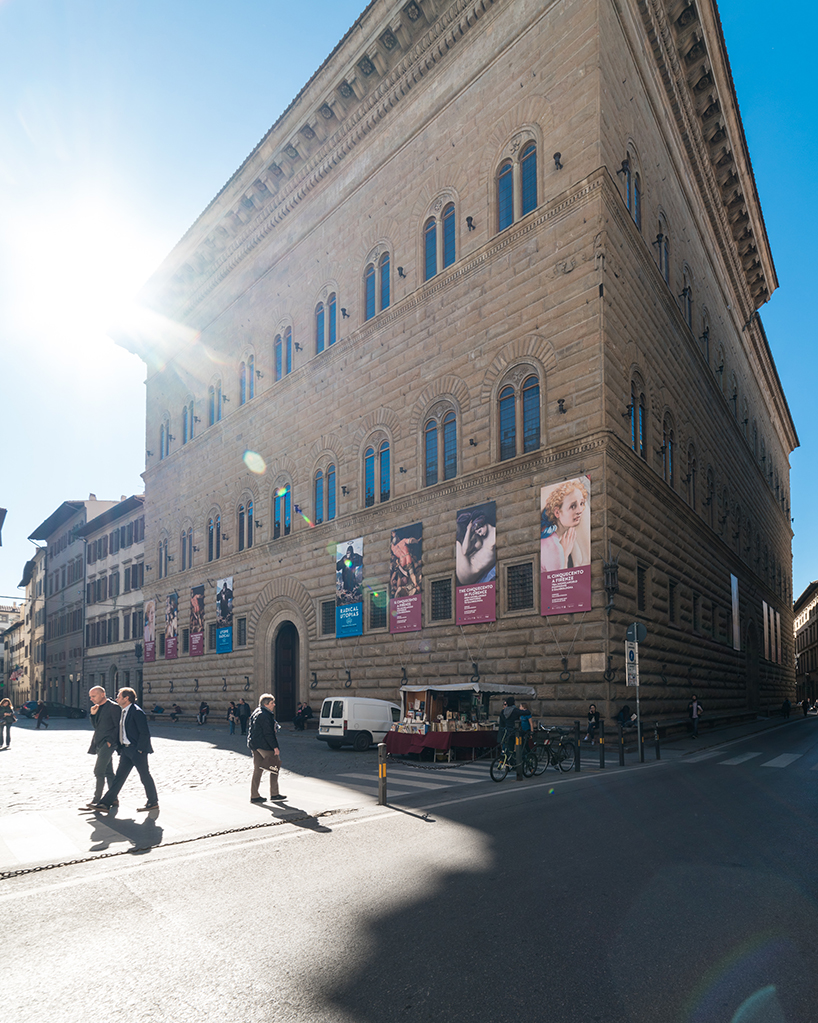 palazzo strozzi, florence is hosting the exposition running until 21 january 2018 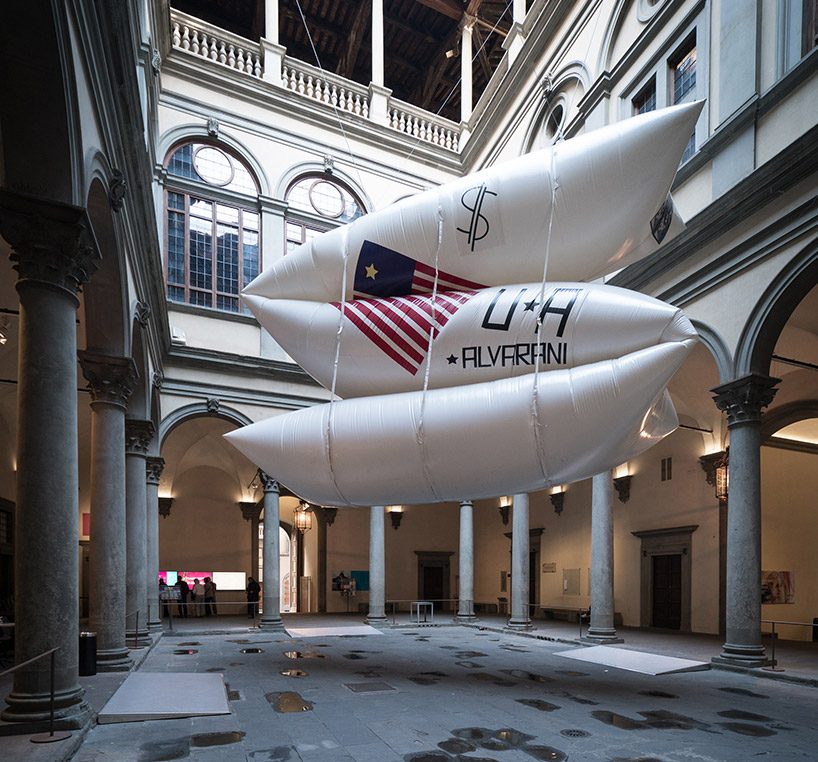 the ‘s’ was used to call attention to the dollar symbol, supermarkets, and advertisements