for the venice art bienniale 2011, the korean pavilion is presenting 14 multimedia works by artist lee yongbaek in an exhibition titled, ‘the love is gone but the scar will heal.’ with works in video, photography, sculpture and painting, the show explores identity and existentialism amid the artifice of contemporary society.

‘angel soldier’ is a video performance in what appears to be a floral landscape, set to the calm sounds of nature. at first sight, it seems to be a still image, but upon closer inspection, the heavily florid picture separates before the eyes as an optical illusion, revealing three-dimensional flowers in the foreground and, behind, a soldier slowly creeping along, masked in the print’s camouflage. 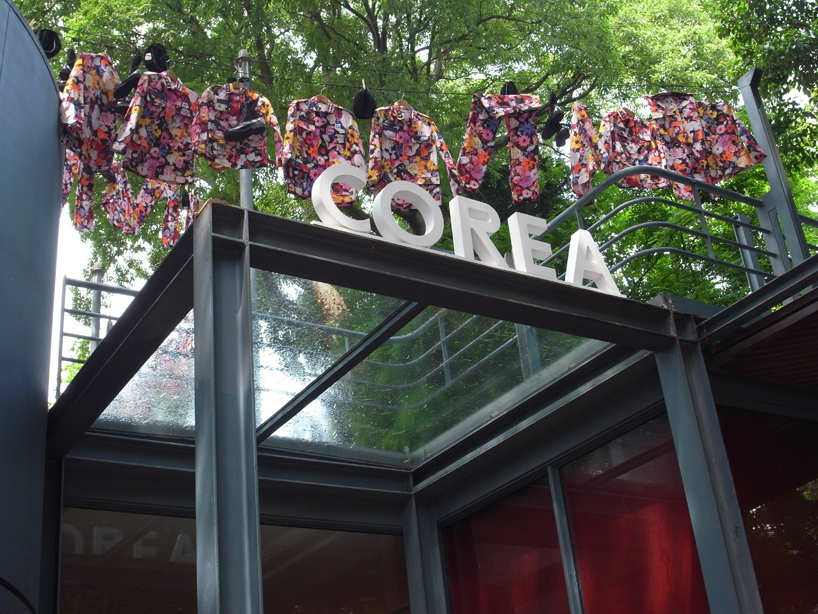 the performance is further developed with photographs of the scene and props from the video. the uniforms hang outside the pavilion entrance and inside the gallery space. a closer look reveals patch details on each, including the names of lee’s artistic heroes — nam june paik, john cage, joseph beuys, and marcel duchamp — as well as technology icons like the internet explorer logo. 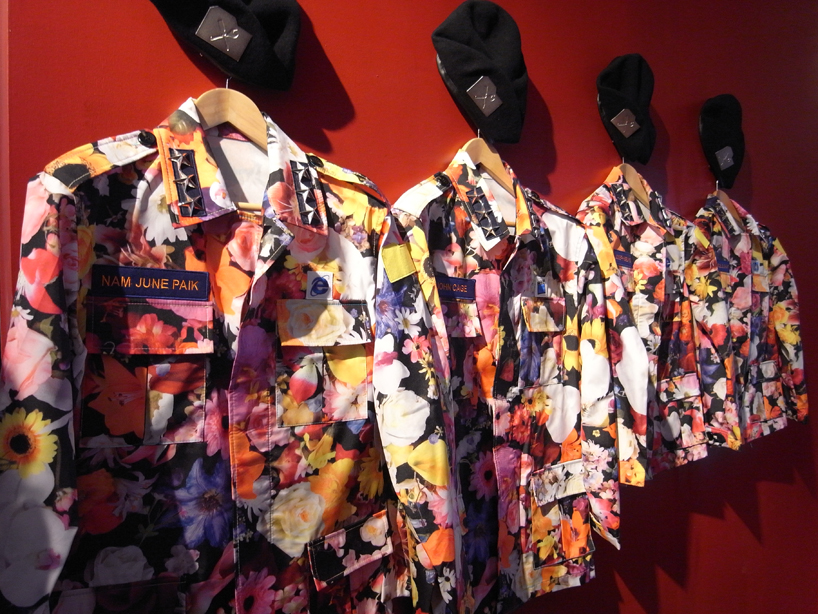 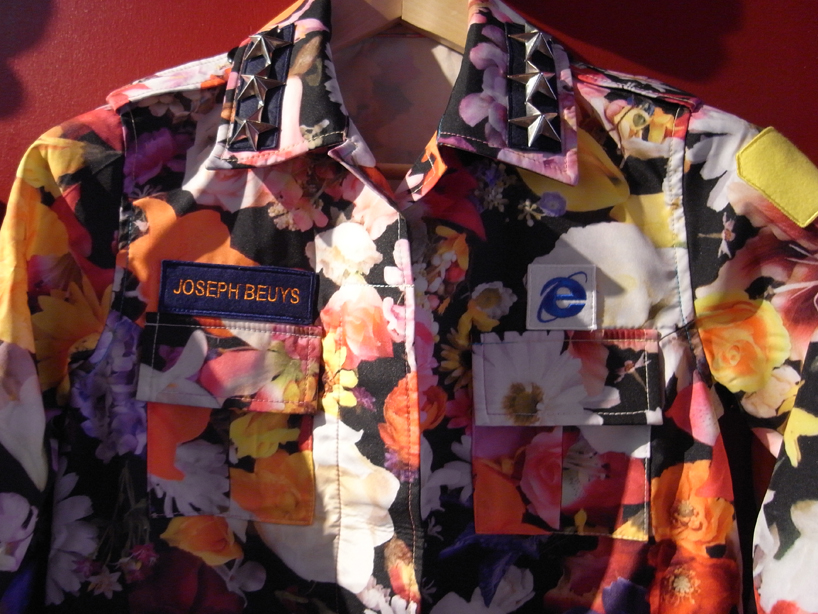 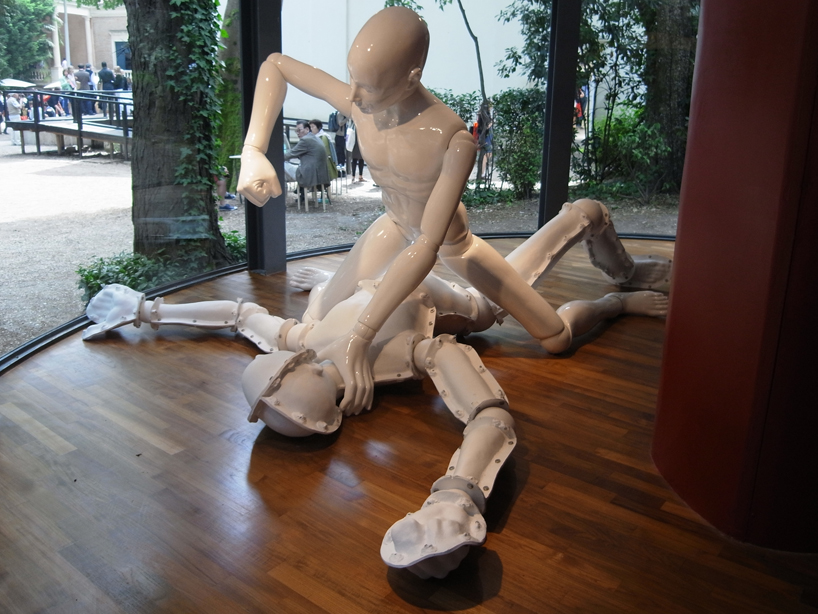 lee’s ‘pieta’ series combines political commentary with faith. made in three versions —  love, hatred and death — ‘pieta’’ shows two cast-molded figures posed in stances reminiscent of religious imagery, but following in the three themes: they are seen kissing, taking a martial arts stance and embracing in a final act before departure with death. 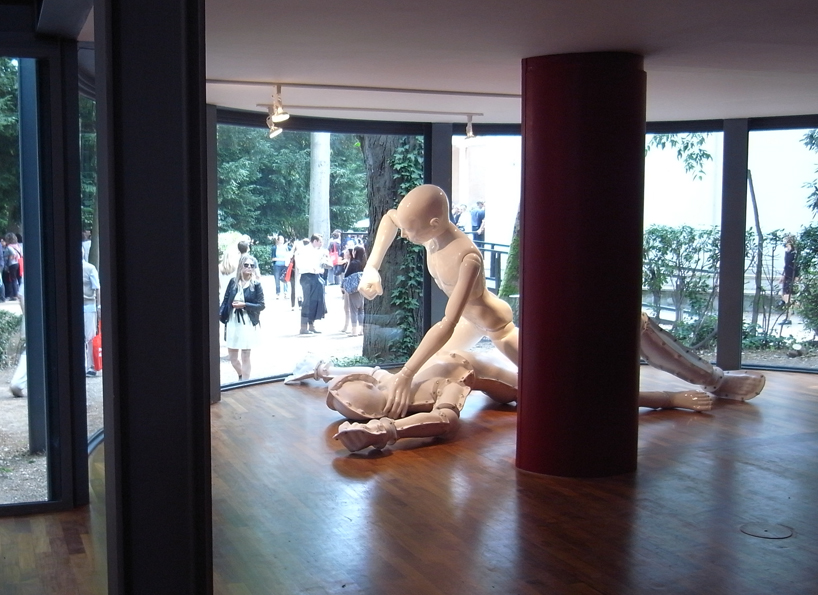 demonstrating lee’s background in kinetics, the ‘pieta’ sculptures use casting elements to create oversized, robot-like figures. in ‘pieta: self-hatred,’ two forms speak to self-destruction, with a molded figure destroying the mold from which it was made. 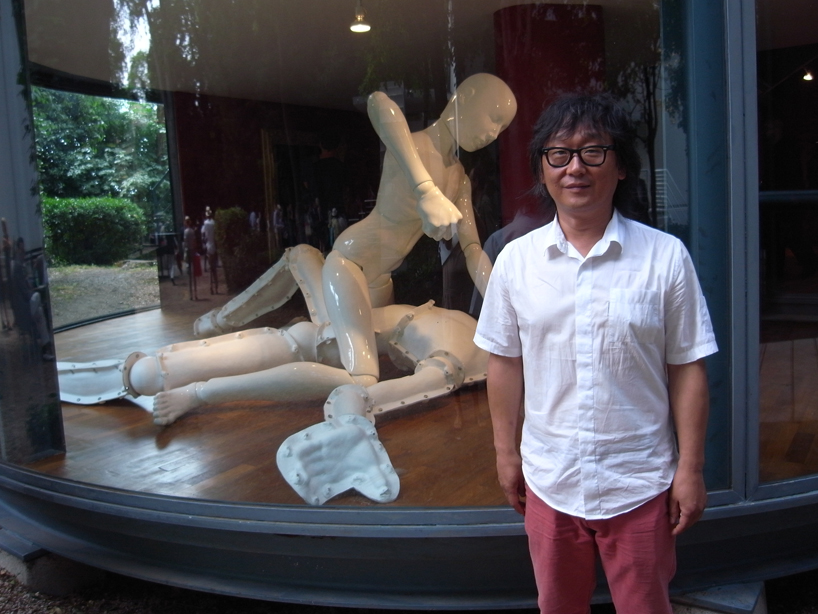 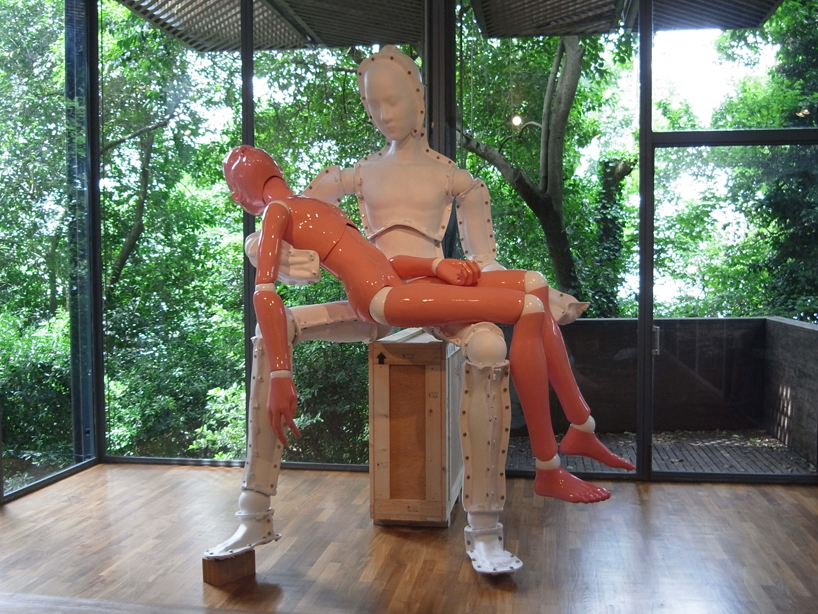 conversely, ‘pieta: self-death’ recreates jesus and mary from the archetypal pieta with a molded figure being held by the mold that created it. 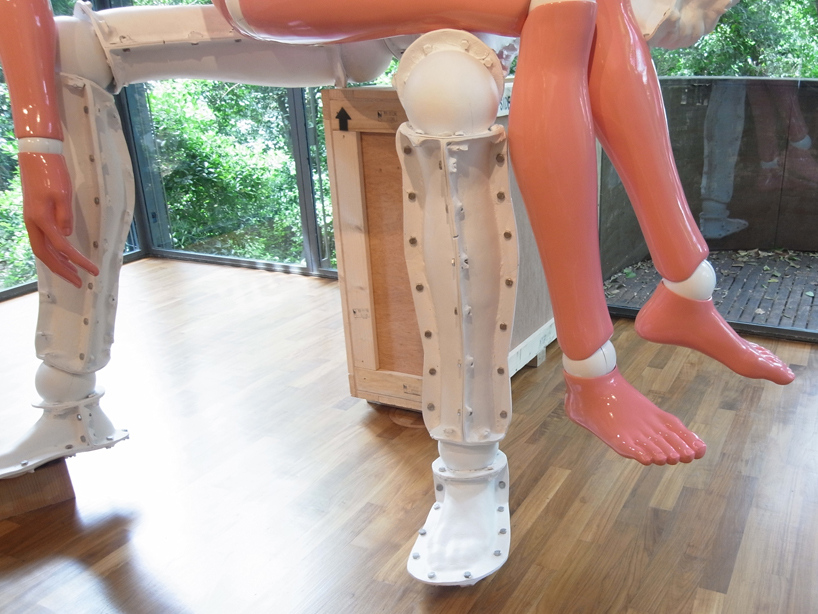 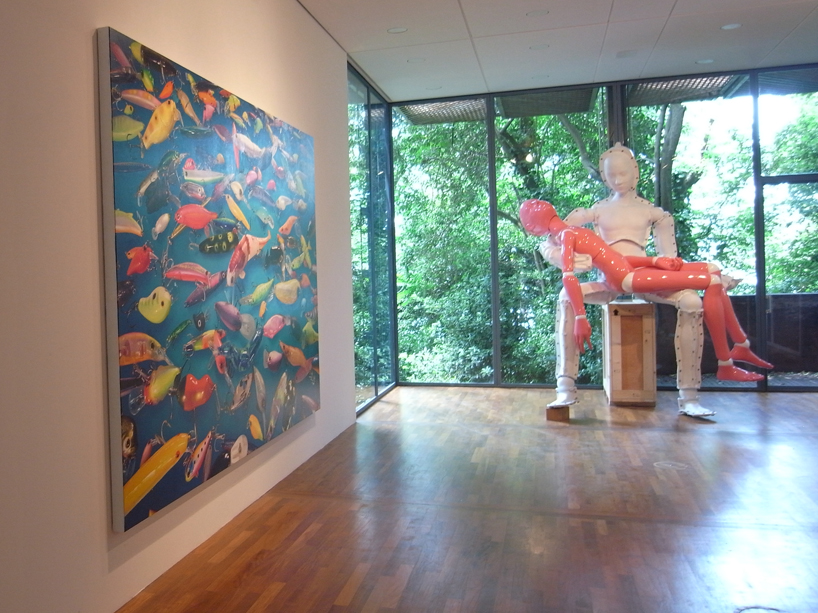 like ‘angel soldier,’ ‘plastic fish’ reflects upon the fatal seduction of simulacrum. in this hyperrealist painting, the artist renders detailed depictions of the brightly colored artificial fishes used as lures when fishing. these objects are pursued by real fish for survival, but only lead to their capture. 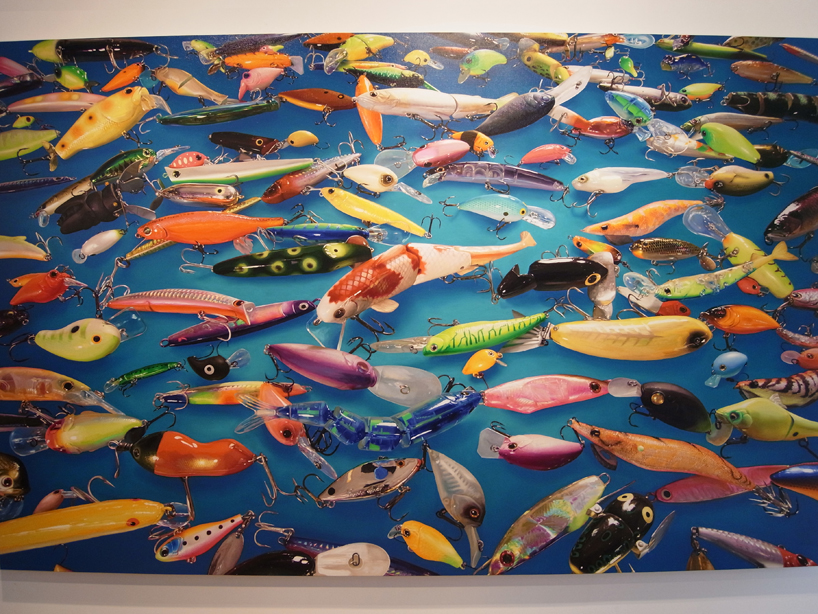 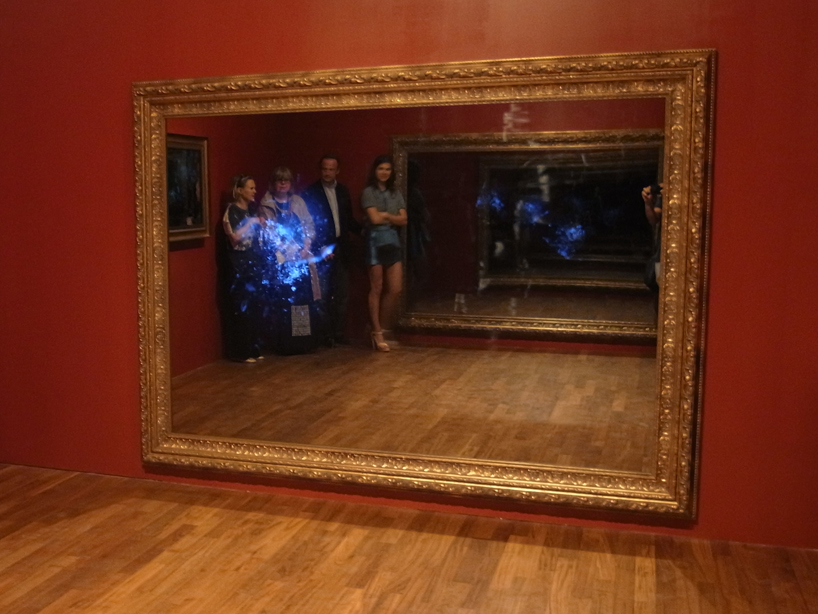 comprised of a mirror, flat screen, and a computer,  ‘broken mirror’ is an interactive sculpture that seems to break suddenly with an earsplitting crack. a mirror that has been pierced with a shot bullet. drawing from buddhist monks who carry out continuous self-reflection, this simple work provokes re-evaluation by collapsing the boundary between real and virtual space. multiple worlds of illusion and reality are created within the piece, leaving viewers with the question of what is substantial and what is ephemeral.

‘in between jesus and buddha’ by lee yongbaek

‘in between jesus and buddha’ is a video which explores the space between two religious icons: the suffering christ and smiling buddha. projected onto a mirror, the two contrasting faces are superimposed, alternating back and forth to morph into a mutant of both.

— this 2011 exhibition has been commissioned by yun cheagab. the korean pavilion is located at the giardini venue. it was first constructed in 1995 by architect kim seok-chul, as the 25th independent national stage.